Next-generation sequencing technologies have significantly transformed cancer genomics research through provision of reliable information about individual tumors, paving ways for precision therapy (1). WGS enhances the sequencing of the entire cancer patient genome and can be employed to detect all germline and somatic mutations, including copy number alternations, gene fusions and chromosomal rearrangements (2). Colorectal cancer (CRC) is one of the leading causes of cancer-associated mortality worldwide with about 1.8 million new cases and 860,000 deaths reported in 2018 (3). CRC is less common in young individuals and often times, young patients with CRC present with late-stage disease (stage III or IV) (4). Stage III patients constitute a considerable proportion of most CRCs, and account for about one-third of all reported cases (5). More than two-thirds of all colorectal patients undergo curative surgery, with a considerable percentage of stage III patients experiencing tumor relapse manifesting as metastasis to distant organs or metachronous colorectal lesions within 5 years of follow up (6). Despite increasing scientific evidences that CRC is a heterogeneous disease, and genetic characteristics of the tumors influence patient prognosis and response to targeted therapies (7), the exploration of individual mutation profiles of same stage, advanced CRC patients has not received significant attention. We here explored the genomic landscape of a young long-term surviving stage III CRC patient and compared our data with those of conventional stage III patients reported in The Cancer Genome Atlas Network (TCGA) database. Mutations in APC, TP53, KRAS, SMAD4, FBXW7 and PIK3CA observed in TCGA patients were not recorded in our study. However, mutations in MUC4, MUC16, ARID1B, BAZ1A, BRCA2, CTNND1 and NCOA2 rarely reported in TCGA patients were predominant in our patient. Additionally, we observed loss of heterozygosity (LOH) in POLE, RET, BMPR1A, NCOA4 and 30 other genes in contrast to deletion and amplification events recorded in TCGA patients. Put together, we offered substantial insights into the genomic features of the patient and provided a valuable resource for further study into the mutations that characterize advanced CRC which may be useful to design clinical therapy for personalized medicine. We present the following case in accordance with the CARE Guideline. 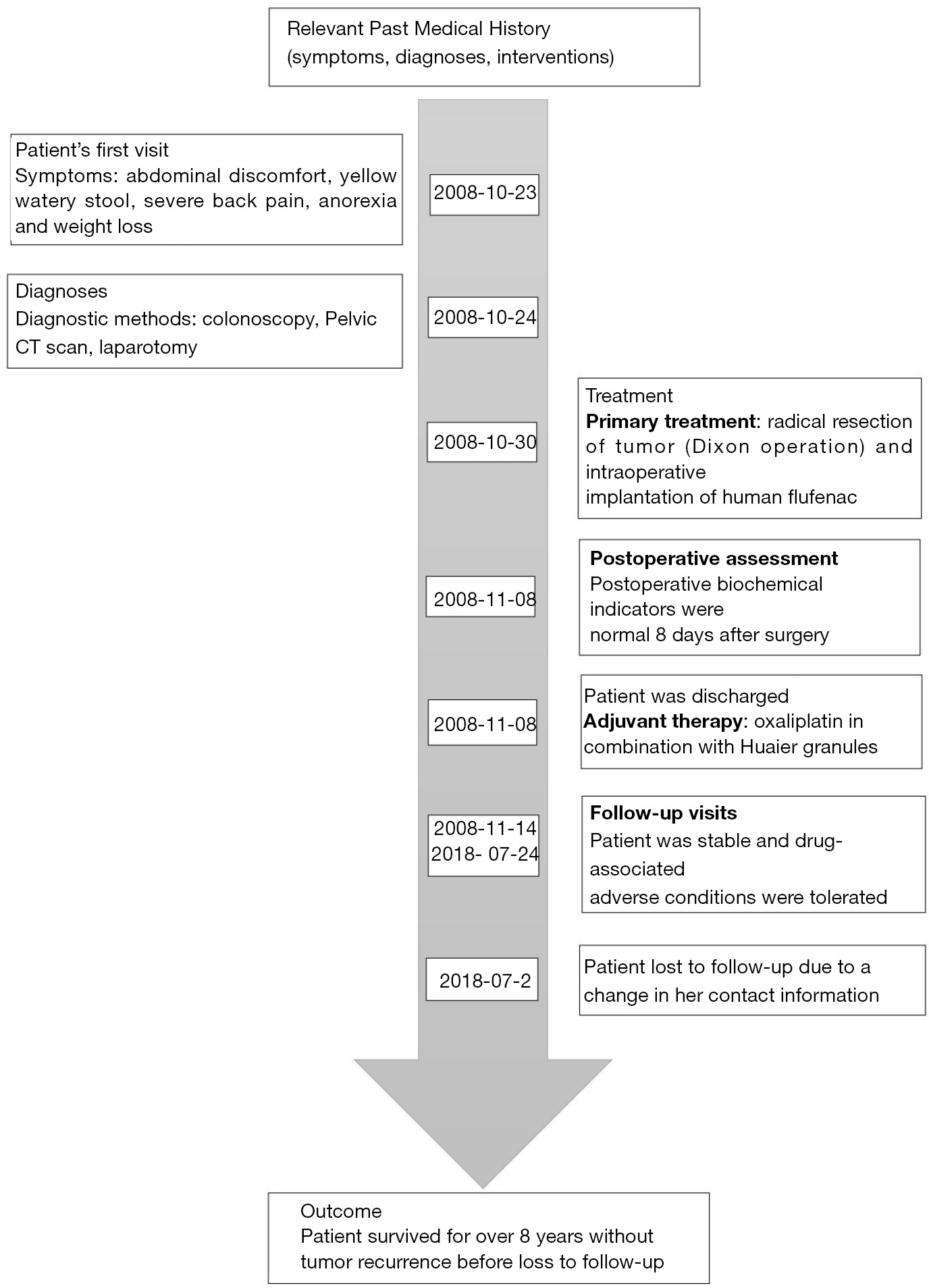 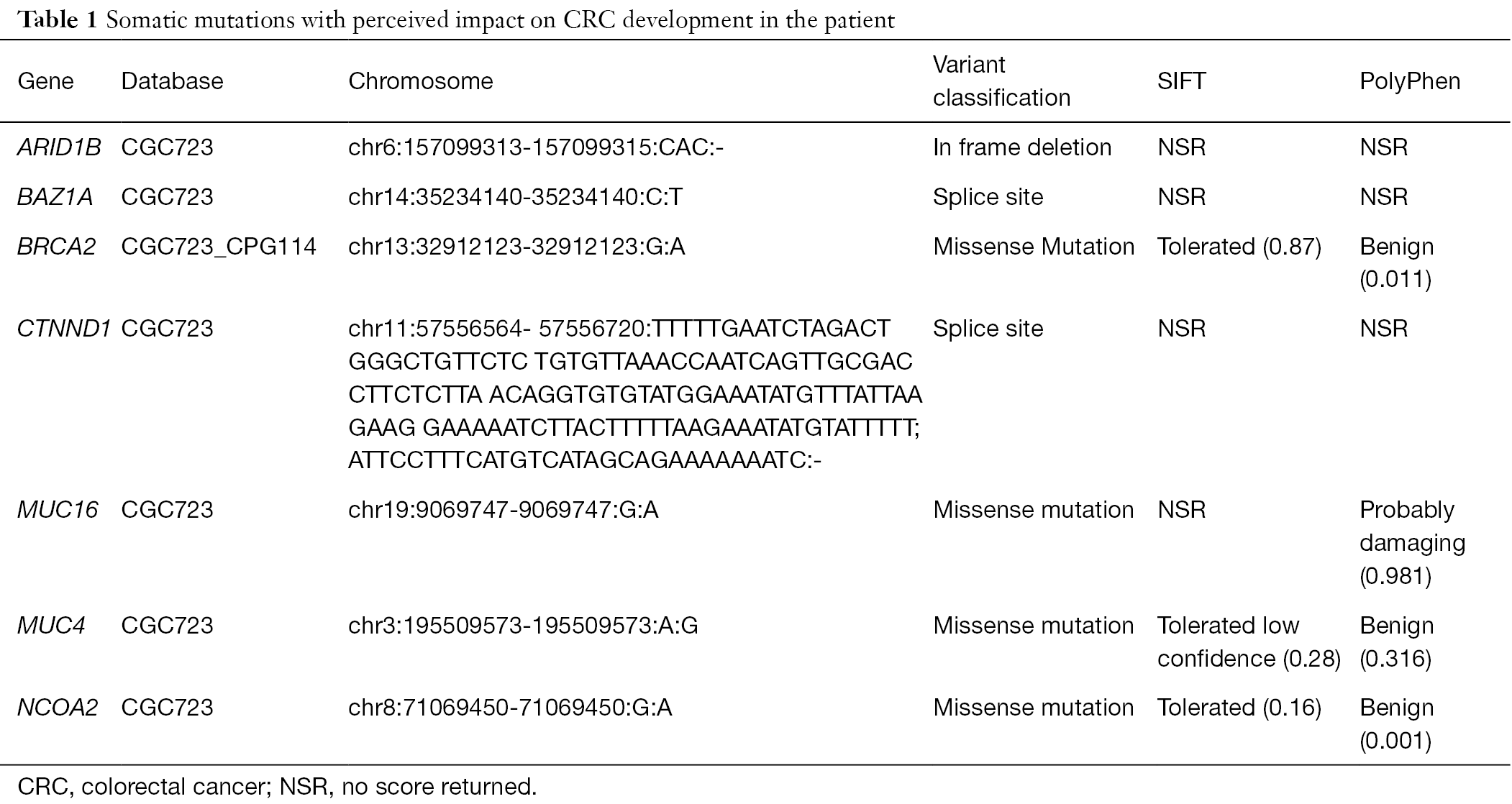 Germline mutations analysis identified 20 SNPs/Indels reported in the CGC and CPG databases. The germline mutations ranged from recurrent cancer susceptibility genes with quantifiable risks to rare genes not conventionally associated with CRC (18,19). Recently, Gong et al. (20), profiled 618 multi-stage Chinese CRC patients including 226 stage III and reported pathogenic germline mutation in 1 of every 3 patients younger than 50, stressing the importance of genetic testing in all Chinese patients younger than 50. In our somatic SNVs and Indels analysis, mutations in MUC4, MUC16, ARID1B, BAZ1A, BRCA2, CTNND1 and NCOA2 were the most informative. However, functional annotations of the genes predicted MUC16 as a potential driver gene in our patient with others being either moderately tolerated or benign. Comparison with TCGA data showed that MUC16 had modest mutation frequency in other stage III patients regardless of their age. Although MUC16 mutations is often associated with ovarian cancer (21), emerging studies have linked mutations in the gene with other malignant conditions, including colon cancer (22,23). Further studies are however required to gain full insight into its oncogenic roles. A lack of correlation between MUC16 mutation and survival outcomes in different age groups of TCGA stage III patients may indicate these mutations have no significant influence on the patients’ prognosis. Also, we found no correlation between the age of the patients and their overall survival. Reports on the influence of age on the prognosis of metastatic CRC has not been consistent. Lieu et al. (4) asserted that age was a significant predictor of overall survival in metastatic CRC (stages III and IV) with the younger and older patients showing worse survival than patients of middle age while Schellerer et al. (24) presented opposing results. Inclusion of greater number of patients of particular age group, evaluation of age as a continuous variable, use of older databases among others were cited as probable reasons for the disparity (4). We developed a broad overview of copy number variations in our patient. Totally, we identified 35 copy number alternations including 34 LOH and 1 duplication. TCGA database query of these genes in conventional stage III CRC patients showed they had deep deletions and amplification events. LOH of one gene or another is thought to be relatively common in cancer of all types, however, it is particularly significant in individuals who have inherited a predisposition for cancer suggesting the high possibility of genetic predisposition in our patient (25). Structural variation analysis identified mutations in BAGE2, a B Melanoma Antigen Family Member 2, which to the best of our knowledge has only been reported in CRC patients from the Han Chinese nationality (26). It remains to be determined whether this gene could be a biomarker or a precision therapy target in the population. The disparity observed between our mutation data and that of TCGA demonstrate the highly genetically heterogeneous nature of same stage CRC and this could be due to the differences in the anatomical pathology of CRC as the disease affects different regions of the digestive tract (27). Moreover, genes that drive tumor progression in different regions may be dissimilar, and most CRC studies do not pay specific attention to separating these regions (28). Notably, the use of WGS technique and multiple variant calling tools are the strengths of our study. WGS approach provides a complete coverage of the coding and noncoding regions, enhancing a comprehensive assessment of the patient genome. It also offers a more robust determination of copy number variations, rearrangements and other structural variations due to the longer reads length (29). The use of multiple tools for variant calling facilitates a more accurate and consistent variant identification, providing clinical-grade variant information for genomic medicine (30). However, our study is not without its limitations. Although WGS gave a comprehensive overview of the various alterations in the cancer patient genome, the differential expression profiles of the mutated genes could not be evaluated as we had no transcriptomics data. In conclusion, whole-genome profiling and comparison of our data with TCGA database produced a genomic mutation profile of the patient and offered a valuable resource for further study into the mutations that characterize long-term surviving stage III CRC which may be useful to design clinical therapy for personalized medicine.

Conflicts of Interest: All authors have completed the ICMJE uniform disclosure form (available at http://dx.doi.org/10.21037/tcr.2020.03.55). The authors have no conflicts of interest to declare.

Ethical Statement: The authors are accountable for all aspects of the work in ensuring that questions related to the accuracy or integrity of any part of the work are appropriately investigated and resolved. This study was approved by the Ethics Committee of the First Affiliated Hospital of Anhui Medical University (No. PJ-20190110) and is in accordance with the Helsinki Declaration as revised in 2013. Written informed consent was obtained from the patient for publication of this Case report and any accompanying images.