The cases of endometrial cancer (EC) diagnosed are increasing (1,2). Surgery is still the standard treatment for early-stage EC (3). However, treatment strategies would be different for EC patients with different incidence of recurrence after surgery. Based on FIGO stage, grade and histotype, EC patients are divided into low risk and high risk groups for the risk of tumor recurrence (4). Biomarkers could help identify people with high risk of cancer (5). Therefore, it is urgent to develop new reliable biomarkers to stratify EC patients into risk categories for individualized therapy (6).

D-dimer is involved in coagulation activation and has been applied for the diagnosis of venous thromboembolism (VTE) (7). In addition, D-dimer levels increase in several kinds of cancer, and correlate with poor prognosis and resistance to treatment (8). However, a recent study suggested that D-dimer levels may not be a promising independent prognostic factor for EC (9). To further investigate the significance of plasma D-dimer in the prediction of high risk group of EC patients, in this retrospective study we analyzed the correlation of preoperative and postoperative plasma D-dimer levels with clinicopathological data of EC patients.

After a 10-hour overnight fast, blood samples were collected from participants, and plasma was then analyzed using second-generation latex immunoassay kit for D-dimer on Sysmex CS-5100 (Siemens Diagnostics, Erlangen, Germany). The standard cut-off value of D-dimer in our hospital was 0.55 mg/L. Platelet count levels were determined with an autoanalyzer (Sysmex XE-2100, Kobe, Japan).

An experienced ultrasonographist performed the compression ultrasonography according to standard procedures (Grey scale, B-mode, Color Doppler) with a high-end ultrasound scanner (Philips HD15 Ultrasound, USA) before and after surgery. If the patients had clinical signs of deep vein thrombosis, additional compression ultrasonography was performed. Pulmonary embolism was diagnosed based on computed tomography of the chest. All Computed tomography pulmonary angiograms were analyzed by two experienced radiologists.

Data were analyzed by t-test, analysis of variance, Mann-Whitney U test, and Pearson’s correlation analysis. Univariate and multivariate analyses based on Cox hazard model was used to determine prognostic factors. Receiver operating characteristic (ROC) curve was used to calculate cut-off value. Significance was indicated at P<0.05. 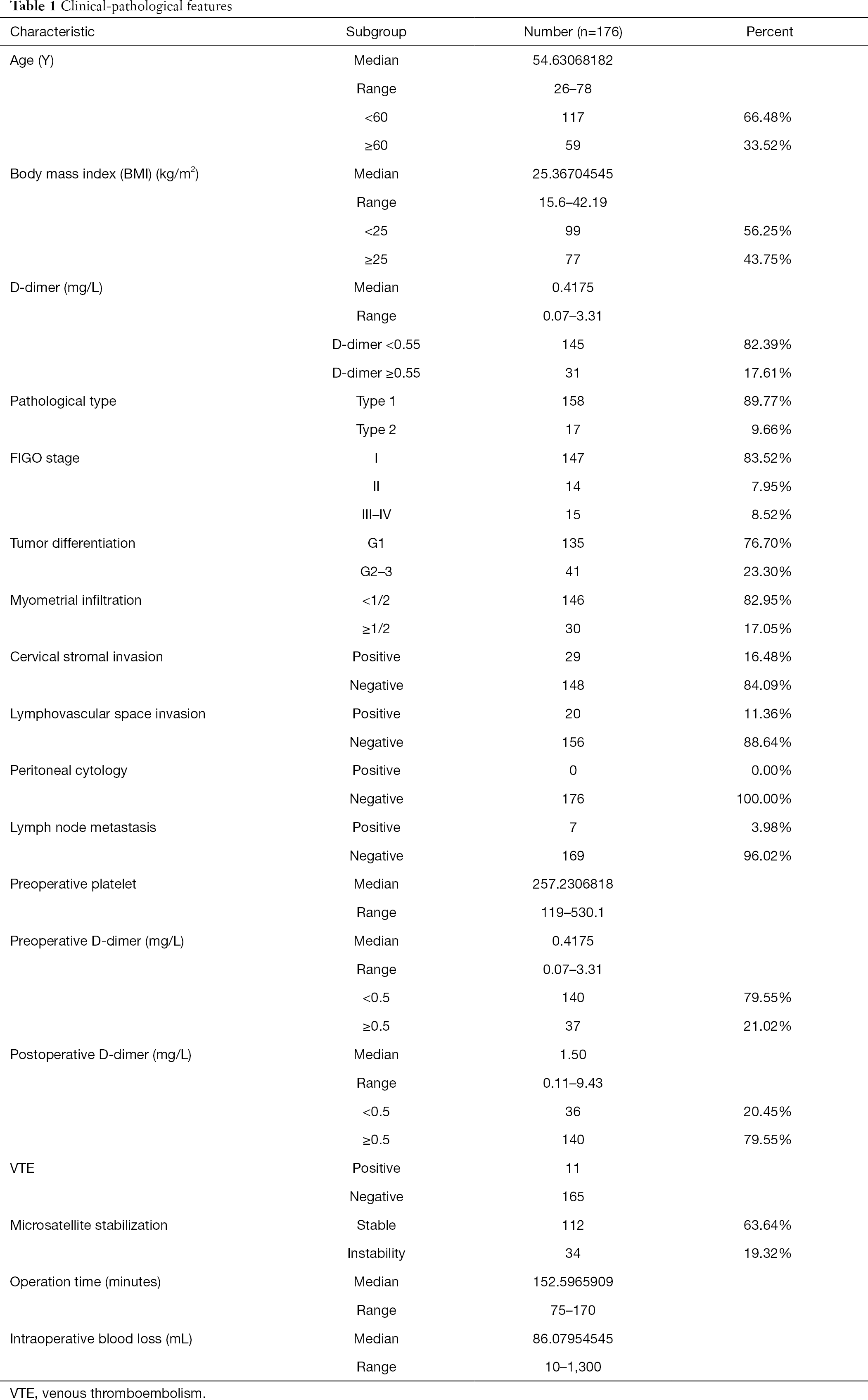 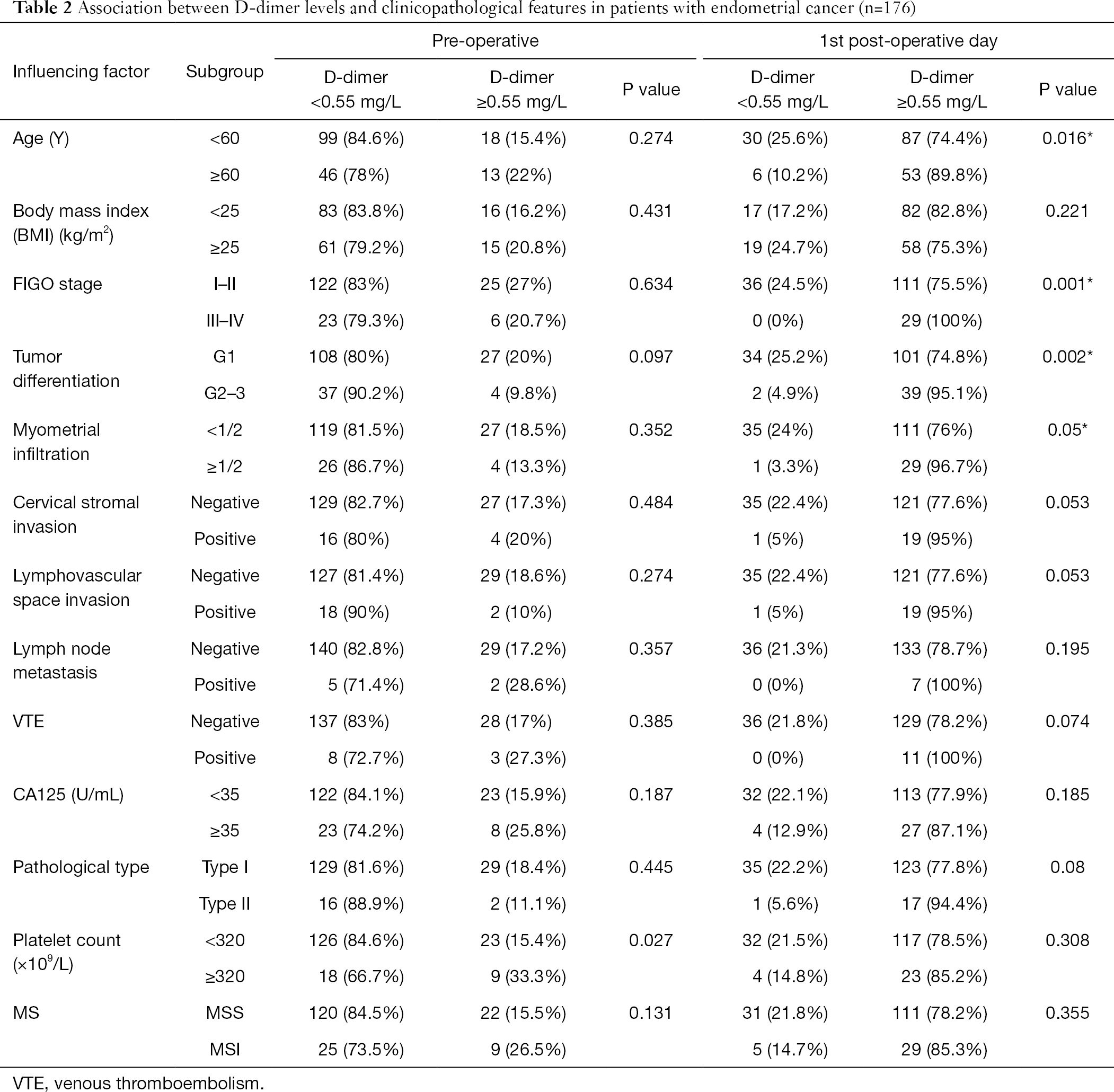 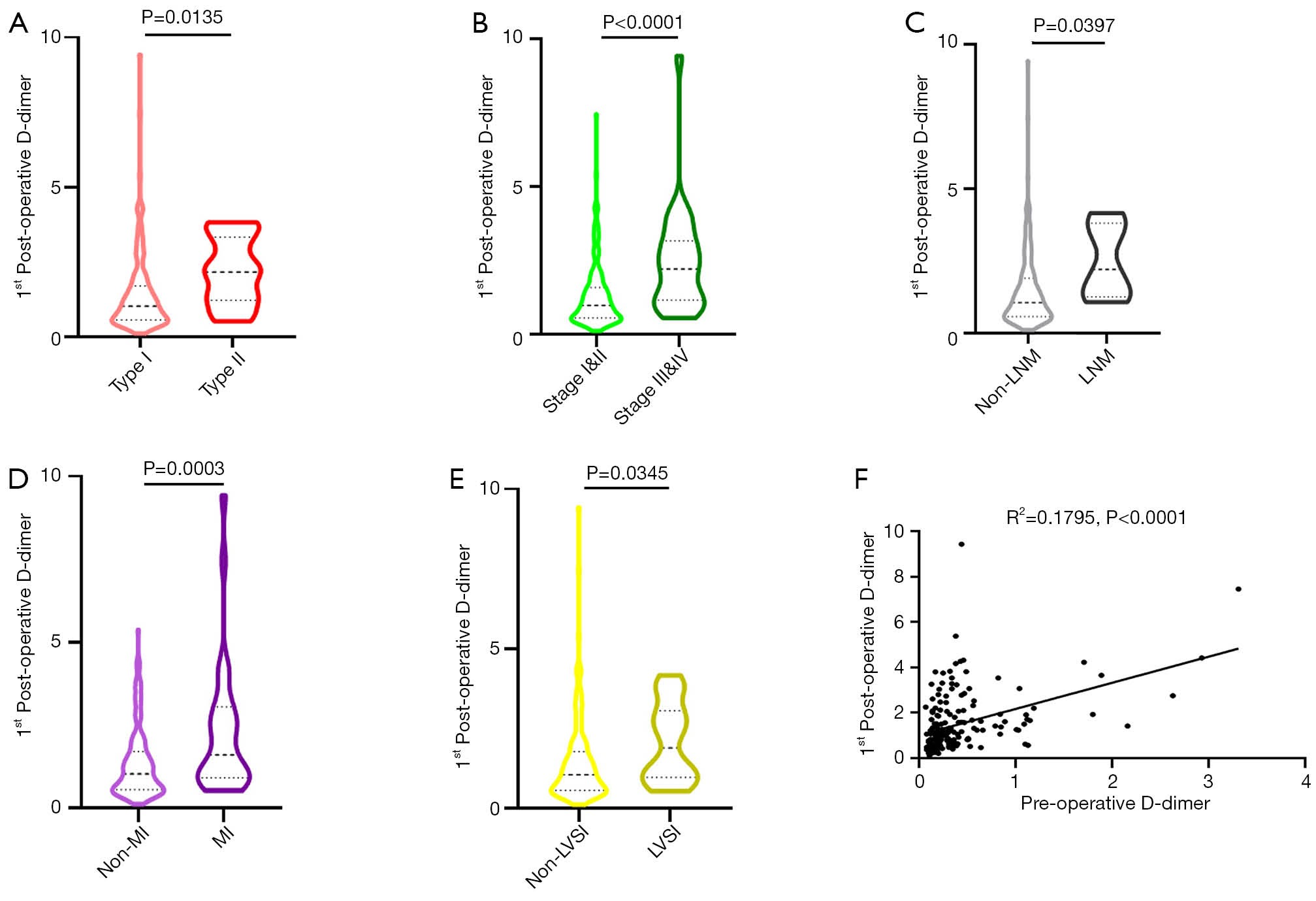 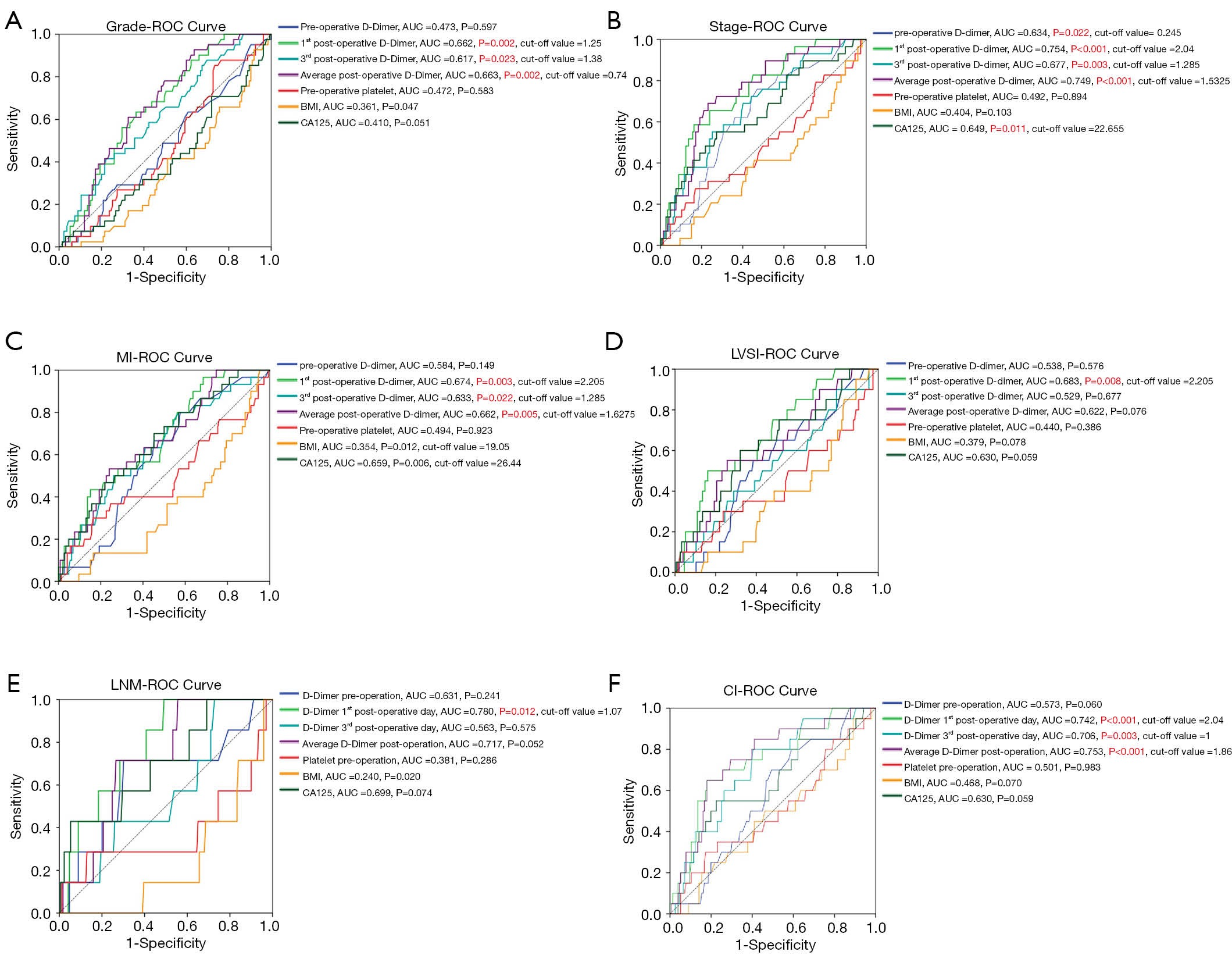 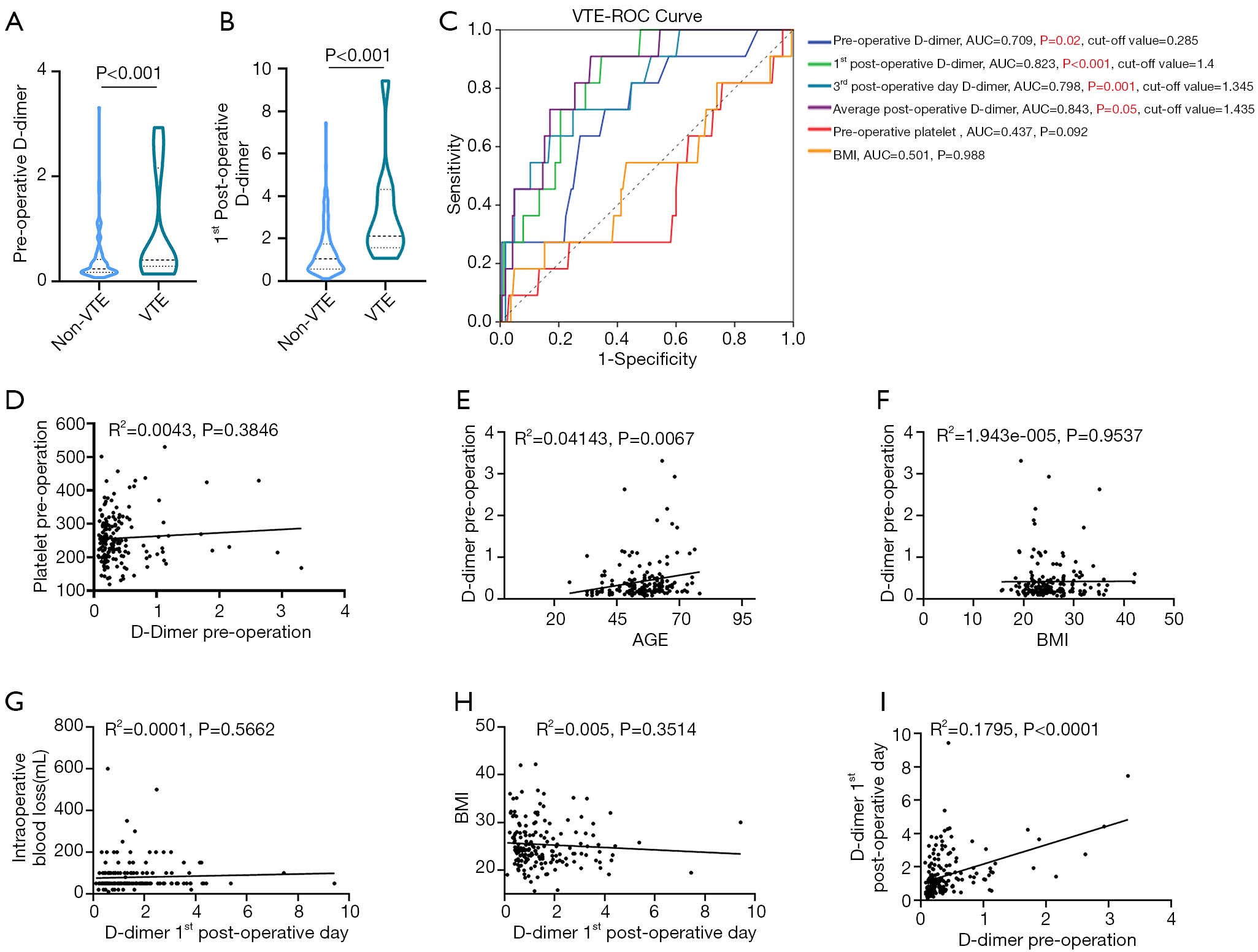 EC most commonly presents with post-menopausal bleeding, and long-term bleeding may cause the abnormality of coagulation system. It is known that coagulation and fibrinolysis are activated in cancers, including gynecological cancers (10). In addition, VTE is a common complication in cancer patients and is listed as an important cause of cancer related death (11-13).

Plasma D-dimer is regarded as an important biomarker of fibrinolysis. The imbalance of the coagulation system is implicated in tumorigenesis (14,15). It is proposed that cancer patients are in subclinical hypercoagulable condition, and fibrinolysis promotes tumor angiogenesis, leading to poor prognosis and even death. A recent study reported that D-dimer may predict postoperative recurrence and prognosis in patients with colorectal cancer metastasis. However, whether plasma D-dimer level could indicate postoperative recurrence and prognosis of EC patients remains unclear.

Currently, there are no valid noninvasive diagnostic methods available for EC. Biomarkers for EC would be invaluable for screening high-risk women, detecting primary and recurrent disease, and preoperative stratification of patients as high-risk and low-risk categories for personalized therapies (16).

Cancer-associated thrombosis could threaten the life of patients, and it is suggested that targeting the coagulation or fibrinolysis system could alleviate cancer progression (17). In most cancers, high D-dimer level usually indicated advanced cancer stage and increased risk of death (18). High D-dimer level is associated with the progression and metastasis of gastric cancer, esophageal cancer, lung cancer, ovarian cancer, and nasopharyngeal carcinoma (19-22). Furthermore, plasma D-dimer level could evaluate the response to chemotherapy in colorectal cancer patients (23).

In conclusion, the activation of fibrinolysis system in cancer patients is an unfavorable clinical sign. As a degradation product of fibrin, increased postoperative plasma D-dimer level may be used to predict high risk of recurrence in EC patients.

Funding: This study was supported by grant from National Natural Science Foundation of China (No. 81602281).

Conflicts of Interest: Both authors have completed the ICMJE uniform disclosure form (available at http://dx.doi.org/10.21037/tcr.2020.04.22). The series “Endometrial Cancer” was commissioned by the editorial office without any funding or sponsorship. The authors have no conflicts of interest to declare.

Ethical Statement: The authors are accountable for all aspects of the work in ensuring that questions related to the accuracy or integrity of any part of the work are appropriately investigated and resolved. The study was conducted in accordance with the Declaration of Helsinki (as revised in 2013). This retrospective study was approved by the Research Ethics Committee of Shanghai First Maternity and Infant Hospital. Individual informed consent was waived due to the retrospective nature of the study.