Ductal carcinoma in situ (DCIS) refers to the proliferation of abnormal epithelial cells in the basement membrane of the mammary duct system without invasion to stroma (1). It is a non-obligatory precursor of subsequent invasive cancer. Due to the inherent heterogeneity of DCIS, distinguishing the high-risk DCIS cases from low/moderate-risk lesions are still a challenge.

Since breast-conserving therapy (BCT) became the standard surgical modality for patients with early-stage breast cancer, some patients treated with BCT unavoidably resulted in an increased incidence of ipsilateral breast tumor recurrence (IBTR) (2). The status of resection margin, the distance of cancer cells from margin, age, tumor size, and nuclear grade of the tumor cells (low, intermediate, or high) are major factors affecting IBTR (3,4). The association between IBTR and other clinicopathological factors needs further investigation.

Molecular analysis of tumors using biomarkers are promising. Although many studies had attempted to use tissue biomarkers as effective predictors of DCIS recurrence, they were limited by small sample sizes, different test methods, and diagnostic criteria. Gene expression methods such as Oncotype DX DCIS recurrence score had been developed and were able to identify patients in whom post-lumpectomy radiation could be safely omitted. The score gene panel contained 12 genes including seven recurrence risk genes and five reference genes (5). However, prospective validation study of Oncotype DX DCIS was still lacking.

Estrogen receptor (ER), progesterone receptor (PR), and human epidermal growth factor receptor 2 (HER2) were the three most important markers with significant clinical relevance (6), but the role of HER2 in recurrence of DCIS after BCT was still inconclusive. Previous studies had showed that HER2 was negatively correlated with ER/PR expression and was more commonly overexpressed in DCIS compared with invasive breast cancers (1). Therefore, the main goal of the present study was to analyze the effect of HER2 on IBTR in DCIS after BCT.

We present the following article in accordance with the STROBE reporting checklist (available at http://dx.doi.org/10.21037/tcr-20-1481).

We conducted this retrospective study using cases from Breast Surgery Department Database at Fudan University Shanghai Cancer Center (FUSCC). The information of this database has been described previously. This study was approved by the Institutional Ethical Committee of FUSCCC. Each participant signed an informed consent form. We selected 213 women with breast cancer during 2005 to 2010, who were diagnosed as pure DCIS and treated with BCT [breast conservative surgery (BCS) with mandatory whole-breast irradiation]. Patients with invasive disease or DCIS with microinvasion were excluded. The preoperative examination, surgical treatment, pathological evaluation, and adjuvant treatment strategy had been described in detail elsewhere (7,8).

Regarding conservative surgery, patients underwent tumor resection with grossly normal tissue margins of 1 to 2 cm, generally down to the fascia. When the tumor was close to skin, the skin overlying the tumor was resected. Sentinel lymph node biopsy was recommended but not mandatory.

Although the pathology reports were retrieved from Breast Surgery Department Database, we reviewed the pathological slides for double check. A breast pathologist and two authors (KDY and JYG) checked the available paraffin slides. The histopathological features of DCIS and surrounding tissues were evaluated.

Immunohistochemical evaluation of ER, PR, and HER2 had formed guideline in invasive breast cancer (9,10). But there was no consensus of HER2 test in DCIS. We here used the immunochemistry standard in invasive ductal carcinoma. Determination of ER, PR, and HER2 status was done by pathologists in the Department of Pathology in FUSCC. Positive ER or PR required that equal to or more than 1% tumor cell nuclei were immunoreactive. HER2 status was classified as 0, 1+, 2+, and 3+. Here we treated 0 and 1+ as negative, 3+ as positive, and 2+ as equivocal. Equivocal HER2 protein expression would not be further tested by fluorescence in situ hybridization.

The primary study endpoint was IBTR, defined as any events which occurred in the ipsilateral breast after BCS. No distinction was made between recurrence lesions because of residual cancer or because of a second primary cancer. The IBTR was confined the events in the breast but not in the axilla.

A total of 213 DCIS cases were included for analysis. Of these, 29 patients had IBTR during the study period with a median follow up time of 80 months. Table 1 provides the basic characteristics of the study population. We found that DCIS patients had 35% positive and 13% equivocal expression of HER2, and 77% expression of ER. Moreover, as shown in Table 2, ER and HER2 expression were also highly related to nuclear grade. Grade III DCIS would overexpress HER2 protein in 59% cases while this value was only 23% in cases with grade I–II DCIS. Similarly, ER-negativity was related to high grade, and ER-positivity to low/intermediate grade. 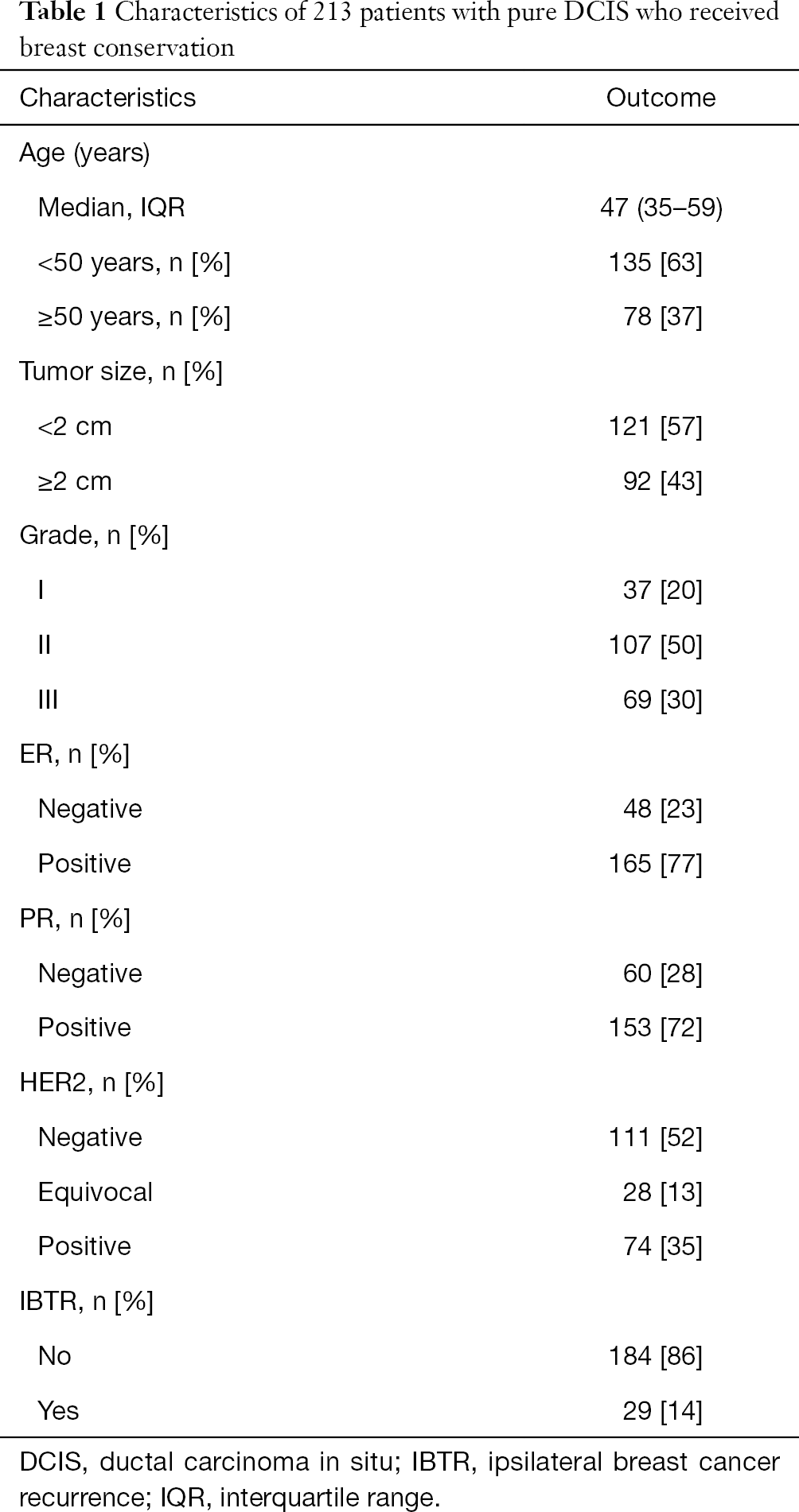 Table 3 shows the association of clinical and pathological characteristics with IBTR. In univariate analysis, patients with high grade, ER-negative, or HER2 positive breast cancer tended to have an increased risk of IBTR. Figure 1A displays the risk plot of IBTR according to ER status and Figure 1B shows results according to HER2. After adjustment for confounding factors, we demonstrated that grade III and HER2-positivity were independent predictive factors for IBTR. Cases with HER2-positive DCIS had a 2.6 times risk of recurrence compared with those with HER2-negative tumors. 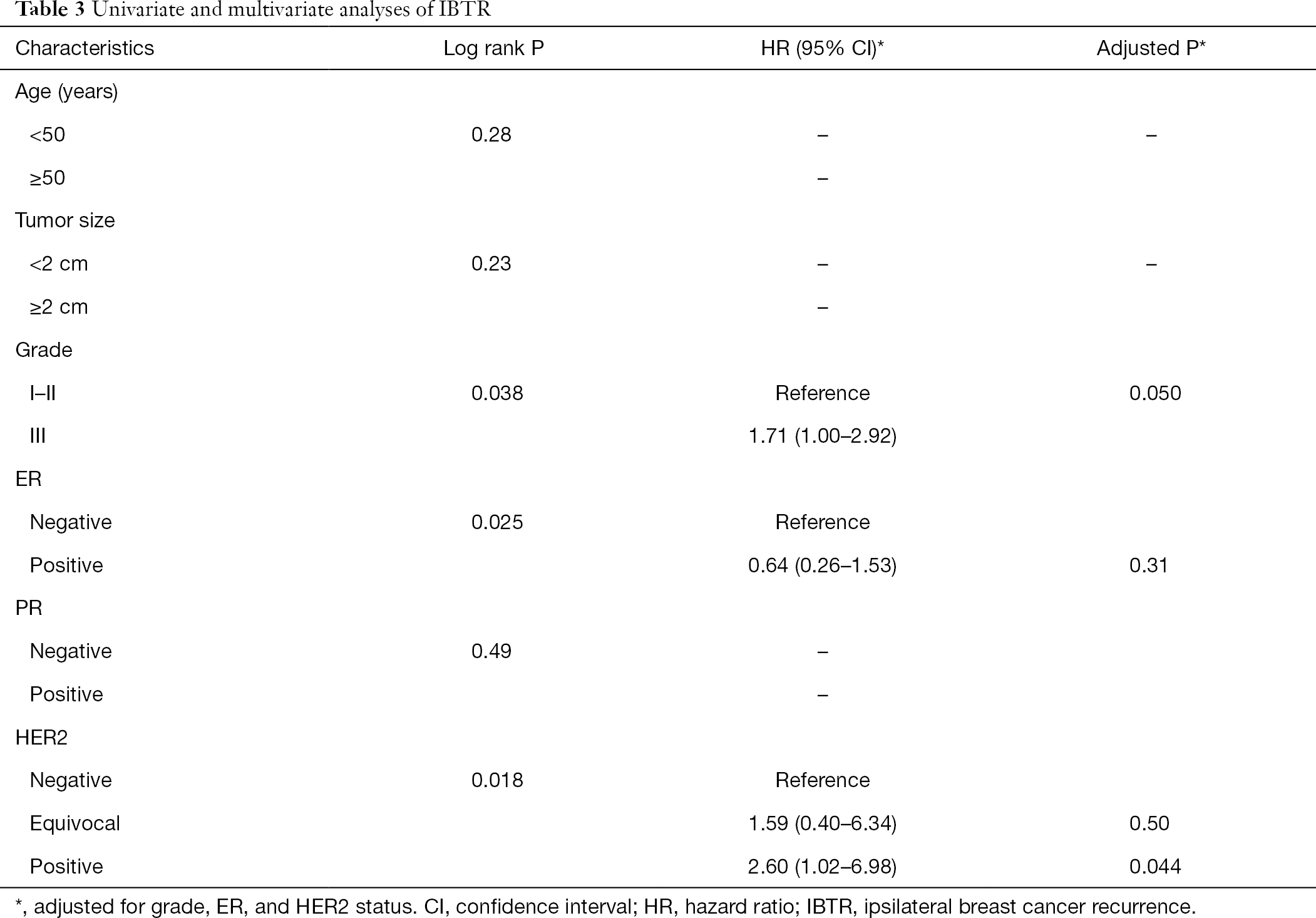 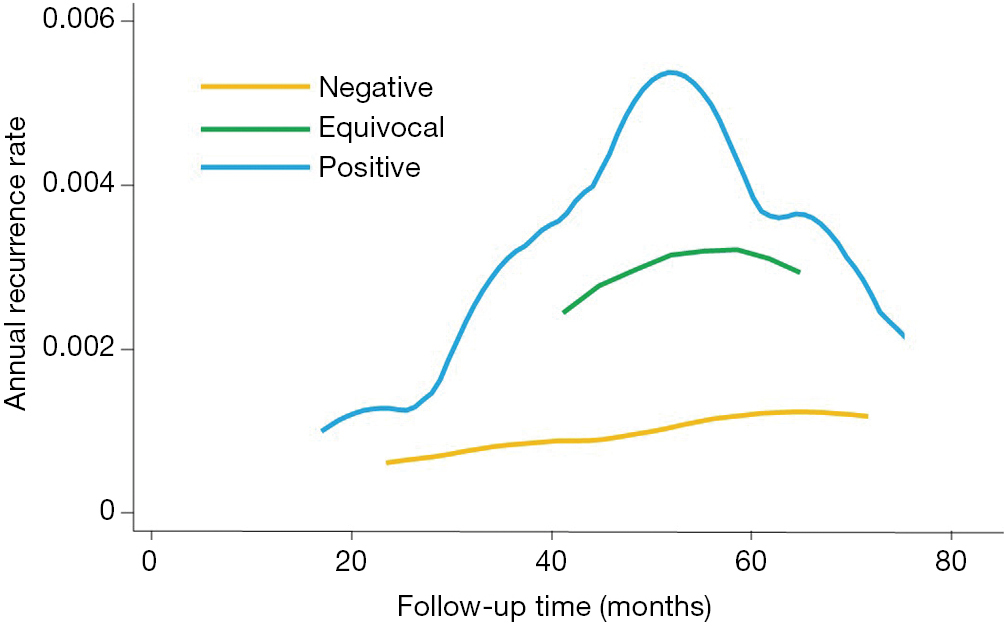 There are currently few biomarkers for predicting ipsilateral cancer recurrence after conservative surgery in patients with DCIS. Our study determined that overexpression of HER2 as well as high nuclear grade could contribute to the increased risk of IBTR.

Results of our study on HER2 were consistent with the findings in study by Davis and colleagues (12). In that study, intraductal necrosis was associated with increased recurrence risk after BCS. HER2 expression distributions was significantly different between nonrecurrent and recurrent cases. HER2 was overexpressed in 14% of nonrecurrent cases compared with 50% in the recurrent cases. In our study, patients with high grade, ER-negative, or HER2-positive breast cancers tended to have an increased risk of IBTR. After adjustment in multivariate analysis, we demonstrated that HER2 overexpression was an independent predictive factor for IBTR. Correspondingly, since ER-negative is highly associated with HER2-positive and higher grade, the associations between ER status and IBTR was not significant after adjusting for HER2 and grade.

Recently, Solin and colleagues developed an Oncotype DX DCIS score using a predesignated DCIS algorithm and containing 12 genes to predict local recurrence after BCS (5). The seven non-reference genes were survivin, cyclin B1, Ki67, STK15, GSTM1, MYBL2, and PGR. The five reference genes were ACTB, GADPH, TFRC GUS, and RPLPO. This assay was performed for patients with DCIS treated with surgical excision without radiation in the Eastern Cooperative Oncology Group E5194 study. The association of the DCIS Score with the risk of developing an IBTR was analyzed. For the prespecified DCIS risk groups of low, intermediate, and high, the 10-year risks of developing an IBTR were 10.6%, 26.7%, and 25.9%, respectively, and for an invasive IBTR, 3.7%, 12.3%, and 19.2%, respectively. Of note, the seven non-reference genes did not include HER2. But it was still early to declare that HER2 was an invalid biomarker for IBTR prediction of DCIS, because in the Solin’s study, there were relatively few patients with HER2-positive DCIS (N=25, accounting for 7.6% of all the study subjects). Additional confirmatory studies for HER2 are warranted.

For HER2-positive DCIS, the risk of recurrence reached a peak at 3–5 years after surgery, and then decreased annually. In contrast, for HER2-negative tumors, the peak was not evident and the annul absolute risk rate was very low. To the best of our knowledge, our study was the first investigation regarding the annual recurrence hazard of DCIS after conservative surgery. We proposed the theoretic recurrence patterns of DCIS after lumpectomy according to HER2 status. For the HER2 positive ones, the recurrence surge quickly increased to the highest peak within 3–5 years, then decreased gradually. In contrast, there was no recurrence surge for HER2-negative patients after breast conservation and annual risk rate is too low for therapeutic intervention. Differences in recurrence pattern might have some implication for DCIS treatment, follow-up, and surveillance. For the HER2-positive DCIS, radiation might be necessary for an effective local control. For HER2-equivocal cases, fluorescence in situ hybridization might need for further clarification of risk level. In addition, examinations and surveillance after surgery should be performed every 6 months for the first 3–5 years and annually thereafter, for HER2-positive DCIS.

Although HER2 was routinely used as a predictor of invasive breast cancer response to anti-HER2 therapy such as trastuzumab, the potential role of anti-HER2 regimens in the treatment of HER2-overexpressed DCIS was unknown. The potential impact of trastuzumab on DCIS recurrence is currently investigated in the NSABP B-43 trial, a prospective randomized trial in which HER2-positive DCIS patients underwent BCT and randomly received or not received two doses of trastuzumab (13).

Some limitations of our study should be acknowledged. First, as a retrospective study, recurrence events were probably underreported or misinformed. Second, the current analysis was based on a median 80-month follow-up and a small sample size of BCS, and more accurate annual recurrence pattern might be seen by analyzing more patients and longer follow-up. Ideally, our observations should be validated in prospective cohort studies. Third, results of FISH test of HER2 might give more information, however, FISH test is not routinely performed in DCIS.

In conclusion, our results suggest that overexpression of HER2 is related to the recurrence in DCIS after breast conservation. We should take the HER2 status into consideration when evaluating local recurrence risk and establishing clinic treatment strategy for DCIS.

Funding: Supported by grants from the National Natural Science Foundation of China (grants 81722032), the 2018 Shanghai Youth Excellent Academic Leader, and the Fudan ZHUOSHI Project, Zhejiang Provincial Medical Science and Technology Program (2020KY903, China). The funders had no role in the study design, data collection and analysis, decision to publish, or preparation of the manuscript.

Reporting Checklist: The authors have completed the STROBE reporting checklist. Available at http://dx.doi.org/10.21037/tcr-20-1481

Conflicts of Interest: All authors have completed the ICMJE uniform disclosure form (available at http://dx.doi.org/10.21037/tcr-20-1481). KDY serves as an unpaid editorial board member of Translational Cancer Research from. The other authors have no conflicts of interest to declare.

Ethical Statement: The authors are accountable for all aspects of the work in ensuring that questions related to the accuracy or integrity of any part of the work are appropriately investigated and resolved. The study was approved by institutional/regional/national ethics/committee/ethics board of Fudan University Shanghai Cancer Center (NO.: 050432-4-05) and informed consent was taken from all the patients.