Thyroid cancer (TC) is one of the most common solid endocrine malignant tumours. It is more common in women, and its incidence has been increasing yearly. Papillary thyroid carcinoma (PTC) is the most common TC. Therefore, this study was performed to focus on PTC. According to research conducted in China, the incidence of TC increased by 1.93-fold in Tianjin from 1981 to 2006, while the incidence of PTC increased by 5.7-fold (1). The growth rate of PTC was ranked second among all female malignant tumours (1). In 2006, the incidence of TC was ranked eighth among female malignant tumours (1). By 2012, it was ranked third in incidence among all female malignancies (2). According to the National Comprehensive Cancer Network (NCCN) guidelines, the number of new-onset TC cases in the United States in 2017 was estimated as 56,870, ranking fifth among female malignancies (3). The increasing incidence of PTC is associated with the popularity of high-resolution ultrasound and the application of fine-needle biopsy, which have led to the early detection of micro papillary thyroid carcinoma (MPTC) (4). However, more importantly, the increase may be closely related to changes in people’s living environment and eating habits (5). Accordingly, an in-depth study of PTC risk factors and clinical features is of great significance for the prevention and early detection of clinical PTC.

To date, mainstream studies have shown that nodular goitre (NG), a high body mass index (BMI), and Hashimoto thyroiditis (HT) are risk factors for TC and are closely related to the occurrence and development of TC (6-8). Among them, multinodular goiter is considered to be a strong risk factor for TC (9). Clinically, NG is a surgical indication if cancerization nodules are suspected (10). Although these studies have confirmed that individual factors such as BMI and HT are risk factors for PTC, whether these factors can increase the risk of NG development to PTC still remains unknown. There is no systematic study on the similarities or differences in the tumour biological characteristics between patients with NG&PTC and those with PTC.

Accordingly, this study retrospectively analysed the clinical data of 650 patients undergoing surgery for thyroid nodule from January 2015 to January 2016 in the Third Xiangya Hospital of Central South University to compare the clinical characteristics of patients with NG, PTC or NG&PTC, investigate the potential risk factors for NG cancerization to PTC, and study the similarities and differences in tumour biology between NG&PTC and PTC to provide a new research direction and theoretical basis for the clinical prevention and treatment of TC. We present the following article in accordance with the STROBE reporting checklist (available at http://dx.doi.org/10.21037/tcr-19-2951).

The study was approved by the ethics committee of the Third Xiangya Hospital of Central South University (No.2015-S135), and each participant signed an informed consent. The whole research was conducted in accordance with the approved guidelines.

The following were the inclusion criteria: all patients undergoing thyroid nodule surgery at the Third Xiangya Hospital of Central South University from January 1, 2015, to January 31, 2016, and all patients with available data, such as height, weight, free triiodothyronine (FT3) level within 1 week before surgery, free thyroxine (FT4) level, thyroid stimulating hormone (TSH) level and postoperative pathology.

This study was approved by the Ethics Committee of the Third Xiangya Hospital.

IBM SPSS 22.0 statistical software was used for the statistical analysis. Quantitative data with a normal distribution are expressed as . A t-test was used to compare the difference in the mean between the two groups. One-way analysis of variance (ANOVA) was used to compare the differences in the mean between the multiple groups. The categorical variables are expressed as the number of patients and percentages, and the chi-square test was used to compare the difference between the rates or composition ratio of the groups. The risk factors for PTC in NG patients were analysed by logistic regression analysis, with αin=0.05 and αout=0.10. The relative risk was assessed by the odds ratio (OR), and the 95% confidence interval (CI) was calculated. P<0.05 was considered statistically significant.

Characteristics of patients with NG, NG&PTC and PTC

Comparison of risk factors between the NG and NG&PTC patients

Although the composition characteristics of the three types of patients (NG, NG&PTC or PTC) were significantly different, we still suspected that a relationship may exist between the three types of patients. First, we conducted an analysis comparing patients with NG and those with NG&PTC. In terms of age, there was no significant difference (F=0.049, P=0.290) between the NG patients (47.19±12.03) and NG&PTC patients (45.54±12.06). We converted the data to a nominal variable based on the age of 55 years for the stratified analysis, which showed no significant differences between the NG patients (82patients aged over 55 years, 25.9%) and NG&PTC patients (15 patients aged over 55 years, 20.3%) (χ2=1.008, P=0.315; Table 2). 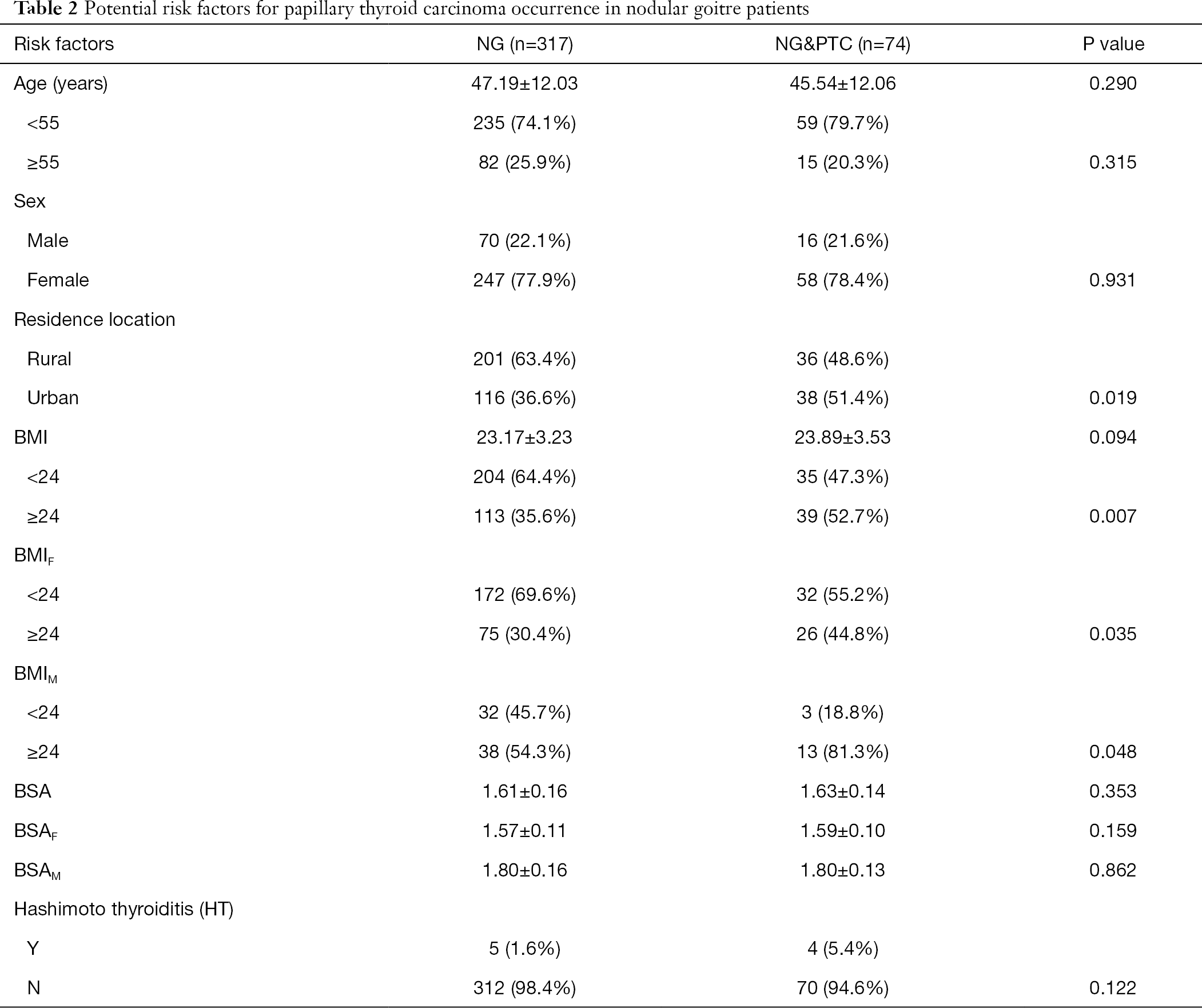 Therefore, we speculated that the NG&PTC patients may be a subset of the NG patients.

Differences in thyroid function between the NG and NG&PTC patients

To test this speculation, we further studied the thyroid function of both NG and NG&PTC patients. Two types of serum thyroid-related hormone testing equipment were available in our hospital and were used randomly for the patients included in this study. This resulted in a reduced sample size for each piece of equipment. Thus, we compared the results separately according to the equipment used.

These data further confirm the speculation that the NG&PTC patients may be a subset of the NG patients.

Therefore, the NG patients may become NG&PTC patients due to NG cancerization facilitated by a high BMI.

Effects of NG on the tumour biological characteristics of PTC 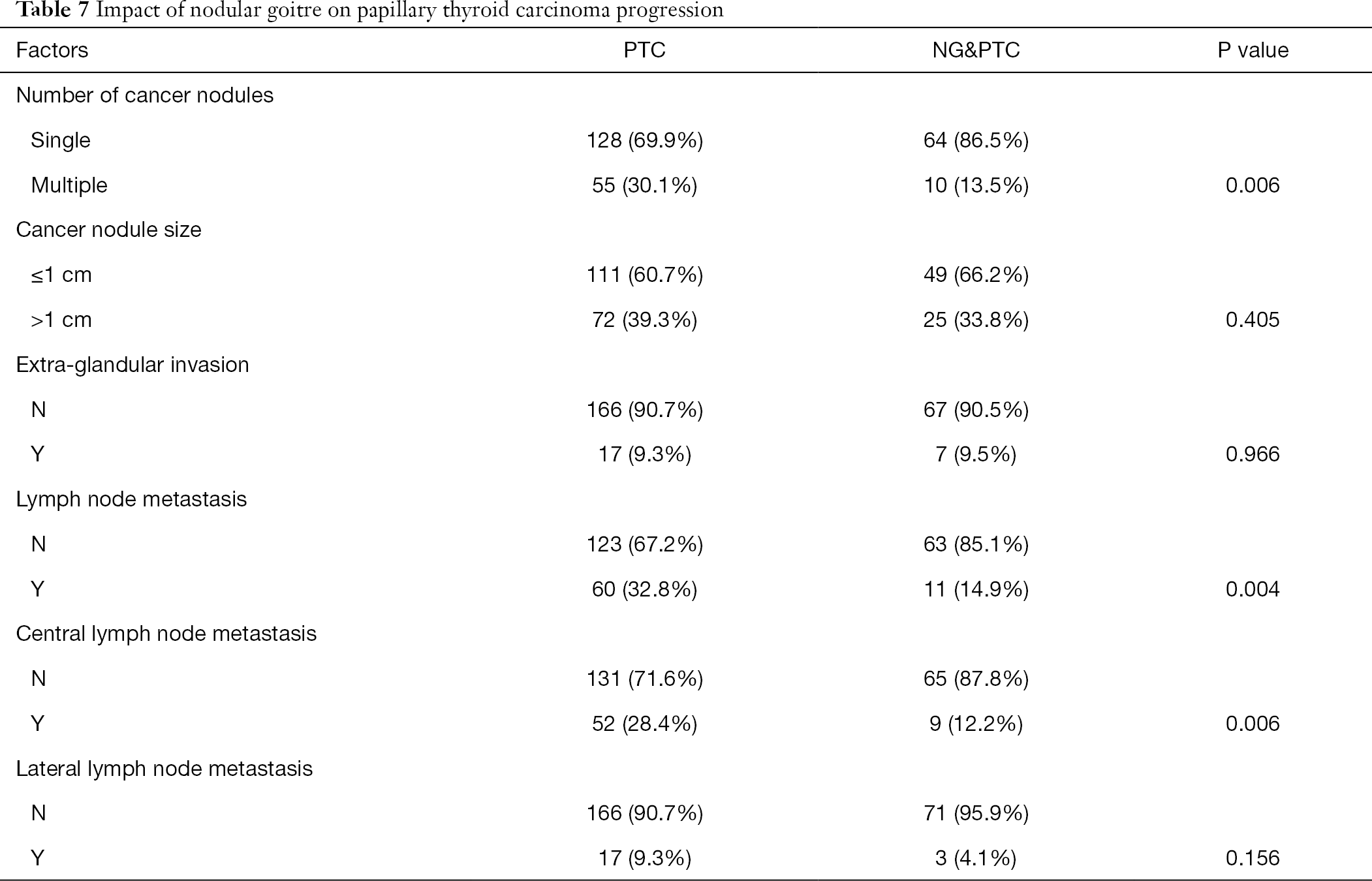 Thus, NG may influence intra- and extra-glandular metastasis of PTC but has no effect on its growth and invasion.

Current studies indicate that the occurrence and development of PTC may be related to multiple factors (16,17). The presence of NG is one of the high-risk factors. In addition, the possible risk factors for TC include gender, geographic location, radiation, inflammation, obesity, abnormal iodine intake, TSH, thyroid hormone, Ras gene activation, BARV V600E gene mutation and P53 gene inactivation (18,19). These risk factors may also cause the progression of NG to TC. Therefore, we conducted the above retrospective analysis based on the clinical facts.

The NG&PTC patients had similar age and gender composition ratios to those of the NG patients. Other studies have shown that age and gender are not risk factors for PTC occurrence in NG patients. The study by Kim et al. (23). revealed that BSA is associated with multifocality of PTC. In the present study, BSA was not a risk factor for the development of PTC in patients with NG. Some researchers have found that the preoperative elevated serum TSH level is associated with an increased incidence of PTC (24,25). The data we obtained by two methods showed that there were no significant differences in serum FT3, FT4 and TSH levels between NG patients and NG&PTC patients. This result suggests that thyroid hormone or thyroid stimulating hormone may not cause the occurrence of PTC in NG patients.

In conclusion, NG&PTC patients and NG patients may come from the same general population. Overweight may trigger the occurrence of PTC in NG patients. NG may limit intra- and extra-glandular metastasis of PTC but does not affect the growth and invasion of PTC. Based on the above conclusions, we may need to be more careful in the identification and follow-up of patients with thyroid nodules in clinical practice. Furthermore, because intra- and extra-glandular metastases are not common in NG&PTC patients, aggressive treatments, such as lymph node dissection or postoperative 131I radiation therapy, may not be suitable.

Reporting Checklist: The authors have completed the STROBE reporting checklist. Available at http://dx.doi.org/10.21037/tcr-19-2951

Conflicts of Interest: All authors have completed the ICMJE uniform disclosure form (available at http://dx.doi.org/10.21037/tcr-19-2951). The authors have no conflicts of interest to declare.

Ethical Statement: The authors are accountable for all aspects of the work in ensuring that questions related to the accuracy or integrity of any part of the work are appropriately investigated and resolved. The scheme was authorized by ethics committee of the Third Xiangya Hospital of Central South University (No: 2015-S135).