Intra-operative radiotherapy (IORT) with low energy X-rays has been effectively used to treat breast cancer patients for more than a decade (1-3). A radiation source that has been employed for such treatments is a miniature 50-kV X-ray generator (INTRABEAM, Carl Zeiss Surgical, Oberkochen, Germany) producing nearly isotropic dose cloud (4-7). When fitted with an applicator, the radiation can be readily adapted to match the treatment area. For example, spherical applicators are ideally shaped for breast lumpectomy cavity, whereas, either flat or surface applicators may be used to treat a flat tumor area (8). Flat and surface applicators are available in a range of sizes (diameter: 1-6 cm).

The goal of IORT is to deliver a conformal and uniform target dose while sparing as much normal tissue as possible. Low energy X-rays are appealing as they provide localized radiation treatment with minimal effects on nearby normal tissues. However, the low-energy photon spectrum makes dosimetry complicated for two main reasons: (I) there is a steep gradient in dose with distance from the source; and (II) the dose is easily perturbed by local heterogeneities (tissue, air, bone, etc.).

At Loyola University Medical Center, we have recently commissioned the INTRABEAM system with flat and surface applicators. Whereas the flat applicator is designed to provide a uniform dose at 5 mm depth in phantom, the surface applicator aims for a uniform dose at the surface with a steep decrease in dose with depth. For each applicator, dose-output and dose fall-off with depth (percent depth-dose, PDD) in water were measured. Lam et al. have recently examined dose distributions obtained with these applicators in water-equivalent phantom (9). However, since patient treatments rarely take place in uniform water-like medium, we decided to investigate the impact of commonly encountered tissue heterogeneities on measured dose.

In this paper, we report dosimetric characteristics of flat and surface applicators in the presence of heterogeneous media. All doses were measured using Gafchromic films in a plastic slab-phantom and verified with a thin-window parallel plate ion chamber in a water tank.

Intrabeam X-ray source (XRS) is a PRS500 system operating at 50 kV/40 µA that may be fitted with either a flat or surface applicator to produce a uniform dose in a plane (10). The user can choose from six flat applicators (diameter: 1-6 cm) and four surface applicators (diameter: 1-4 cm). Figure 1 shows typical dose distributions achievable with these applicators measured with film in a homogeneous tissue-equivalent solid-water medium. For each applicator, both absolute dose rate (Gy/min) and depth dose variation were also measured in a water phantom with a thin-window parallel plate ion chamber (PTW 34013A, Physikalisch Technische Werkstaetten, Freiburg, Germany) (11) (Figure 2A).

Calibrated EBT3 Gafchromic films (International Speciality Products, Wayne, NJ, USA) were used to obtain dose distributions in a solid water slab phantom (Plastic water, CIRS, Norfolk, VA, USA) (12). This phantom is indicated to be appropriate for use with energies above 150 kV. Recently from CIRS, a new version of plastic-water (PW-LR) has become available that is better suited for the X-ray energy range used in our study (>15 kV). This phantom material was not available to us for this work. However, since all of our phantom results were calibrated against water measurements and our main goal was to investigate relative changes in dose, some of the effects due to phantom type are expected to be mitigated. The XRS source was mounted vertically in a support stand with the end of applicator touching the phantom surface. EBT3 films were positioned at depths of 2, 5, 10, and 15 mm from the surface of phantom.

EBT3 films were calibrated by determining the dose vs. optical density relationship (characteristic curve or Hurter-Driffield or H&D curve) by irradiating a series of films with doses ranging from 0 to 4 Gy at 5 mm depth. To account for the effect of variation in X-ray spectrum with depth on H&D curve, films were also irradiated parallel to beam direction. Depth-dependent optical density to dose relationship was established (Figure 2B). Each film measurement was calibrated against depth-dose results obtained with a parallel plate ion chamber in water. All recommended precautions for film-handling, film-exposure and film scanning were observed (12-16). Films were handled with tweezers and gloves and allowed to develop for 24 hours prior to scanning. The irradiated films were scanned in portrait orientation by placing them at the center of an EPSON 11000XL PRO flatbed scanner. Red channel was used and grey pixel values converted to dose using H&D curve. RIT (Radiological Imaging Technology, Colorado Springs, CO, USA) film scanner software was used to analyze films. Film results were verified with ion chamber measurements.

During IORT, significant dose changes may be caused by any of the following: angled applicator, air gap between applicator and surface to be irradiated, and tissue heterogeneities (Figure 3). To examine each of these effects, a film was irradiated to 1 Gy dose at 5 mm depth from the phantom surface. The first two effects were evaluated by angling the applicator by 1-2 degrees and introducing a 2 mm air gap. The effect of heterogeneities on dose distribution was examined by substituting different thicknesses (0-4 mm) of phantom material (plastic-water) upstream from the film with air and bone material (ρ=1.82 g/cc) (Figure 3). Each heterogeneity was shaped as a cylindrical disk with a diameter of 25 mm. 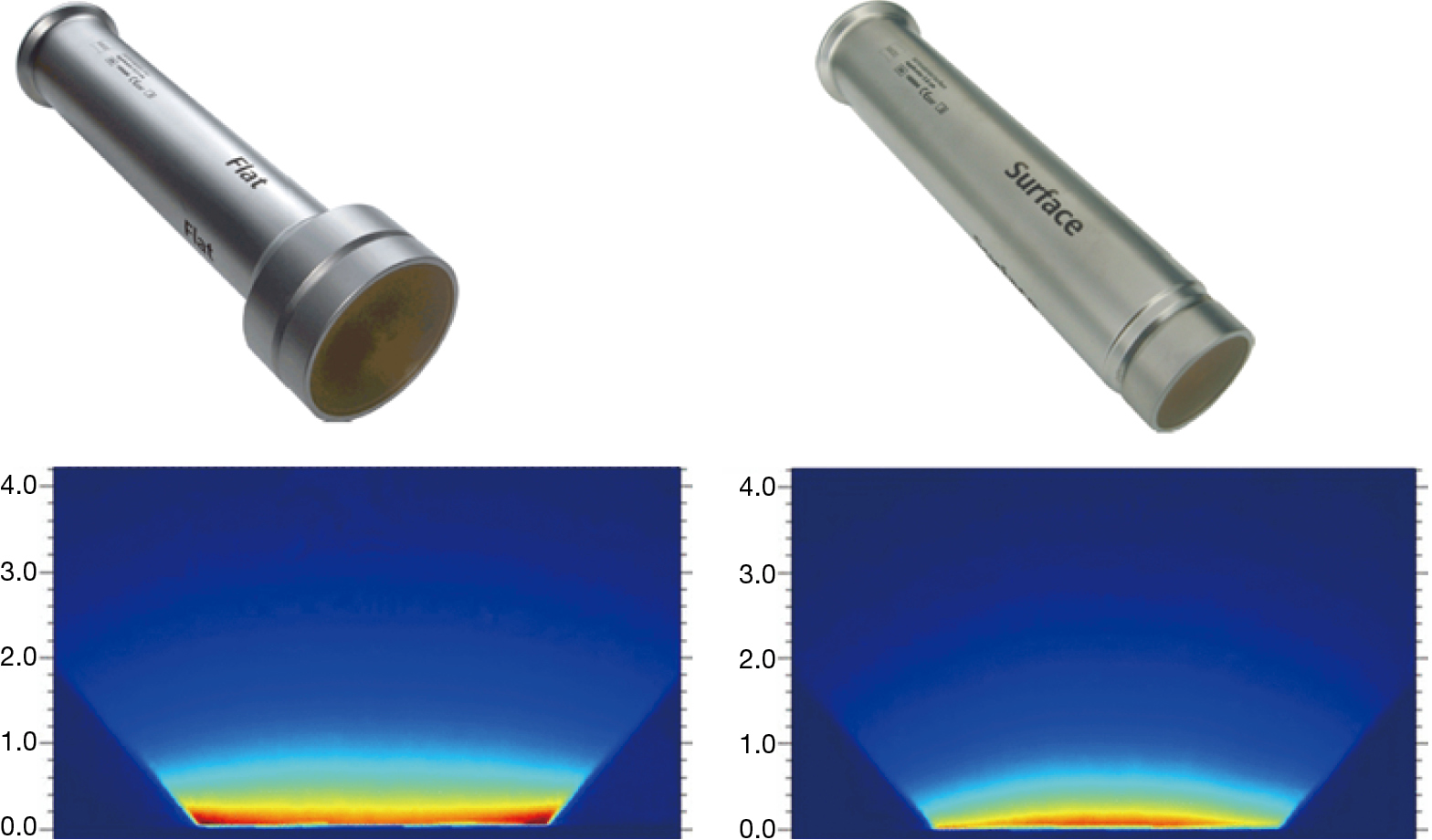 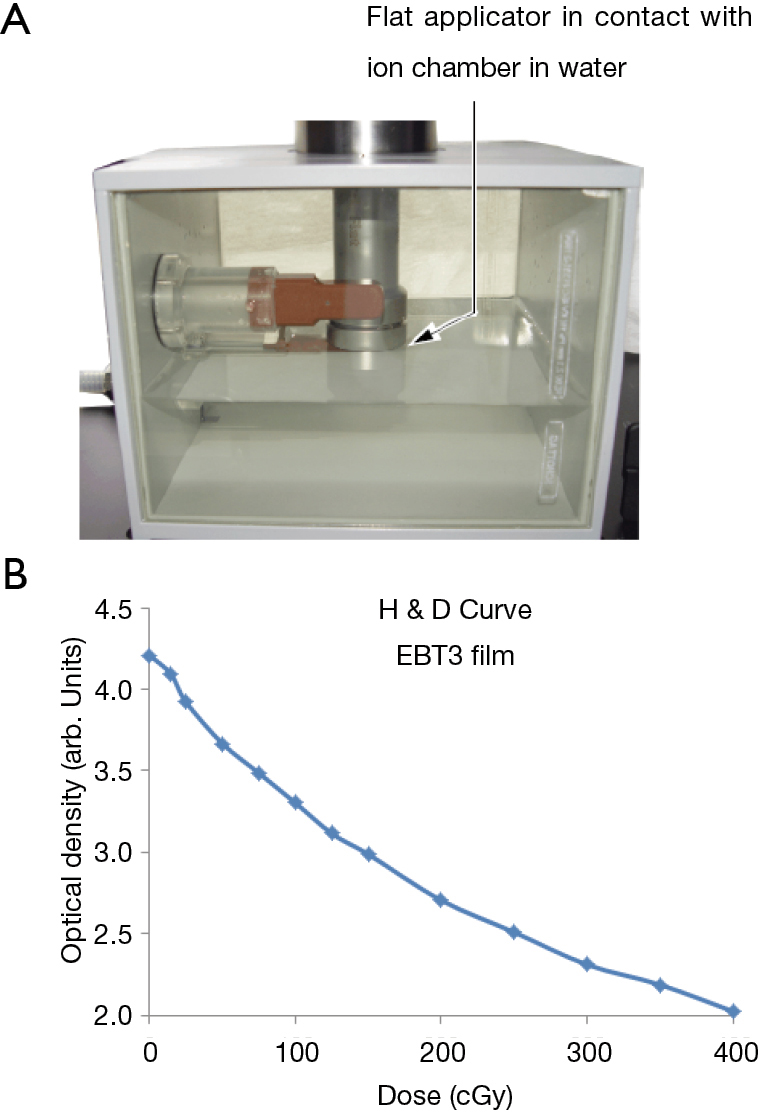 Figure 2 (A) Setup for dose measurement in a water phantom with parallel-plate ion chamber; (B) Optical density vs. dose relationship (H&D curve) for EBT3 film used in this study. 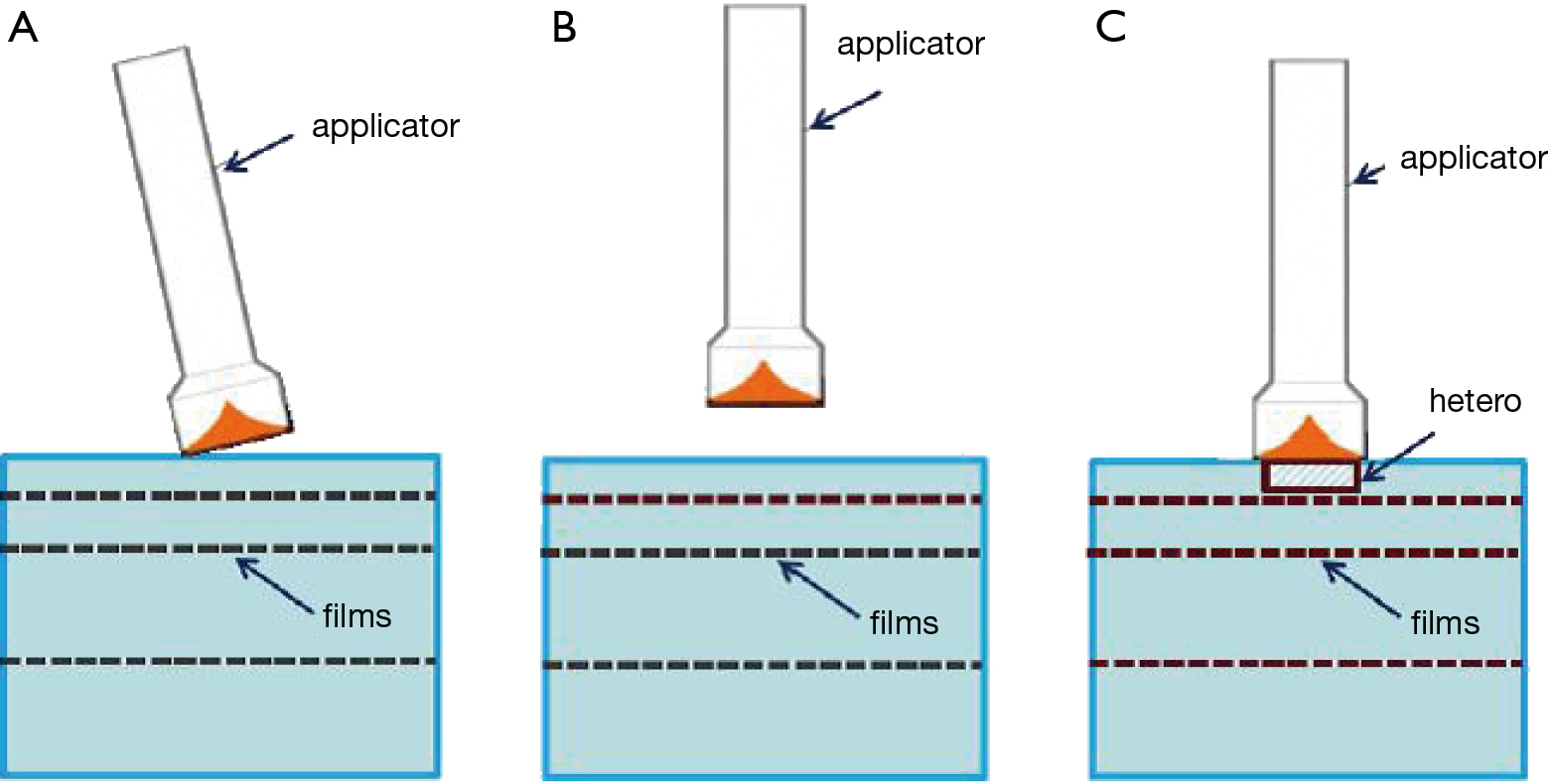 Figure 3 Experimental setup to investigate dose effects of (A) angled applicator; (B) air-gap between applicator and phantom surface; and (C) tissue inhomogeneity on measured dose distribution. Location of EBT3 films is shown in dashed lines.

Whereas tests were conducted with different size flat and surface applicators, for convenience, we shall only describe the results from a 4 cm flat applicator. The measured dose rate for a flat-4 cm applicator at 5 mm in solid water was found to be 0.349 Gy/min.

Effect of incorrectly placed (angled) applicator: angled applicator resulted in a dose gradient in the treatment region leading to a sub-optimal treatment. Approximately 1-2 degree of angulation in the applicator, which is not uncommon during treatment, can result in a 10-15% dose gradient across the treatment area (Figure 4A). 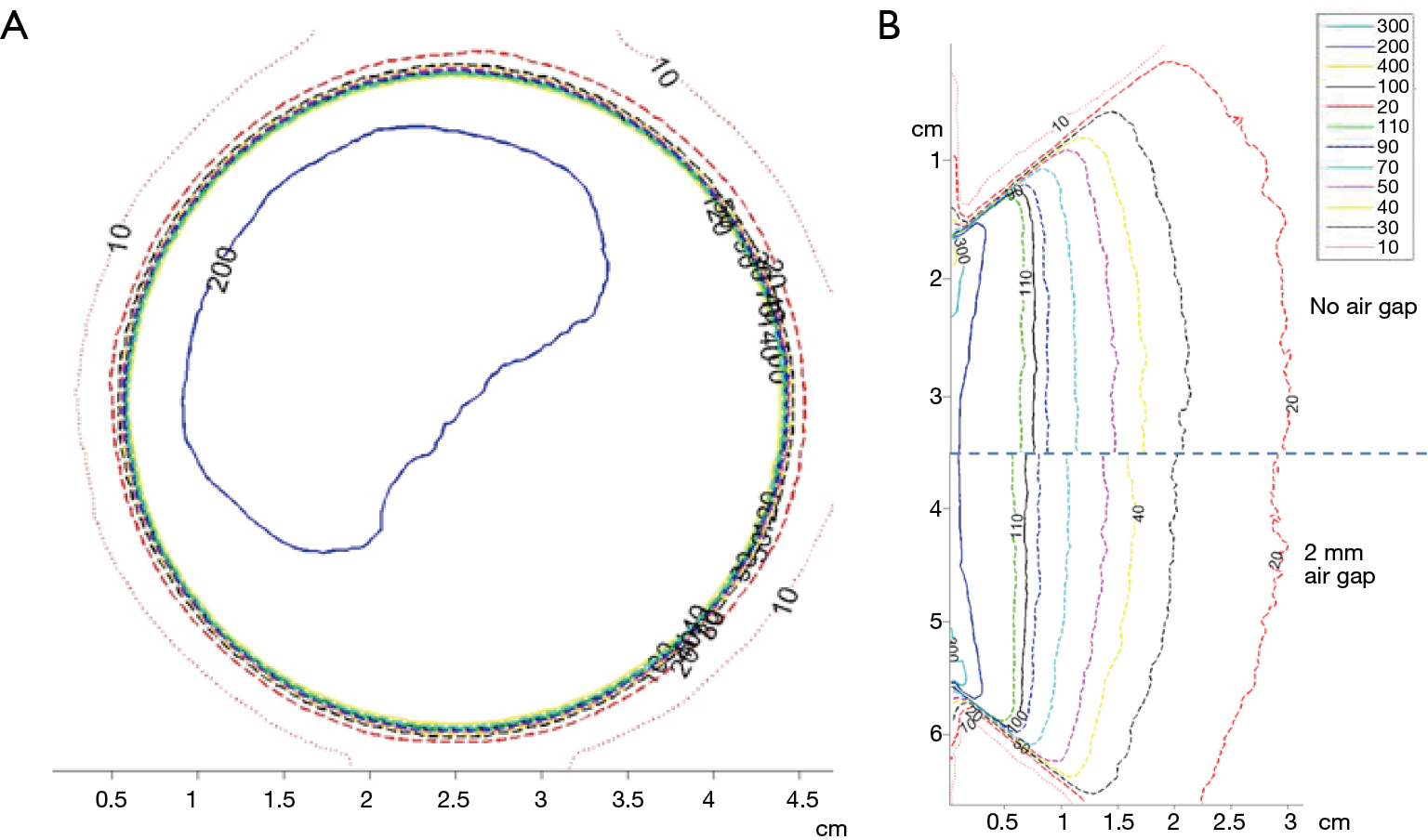 Effect of Air Gap: An air gap between the applicator and phantom resulted in a lower dose rate at the prescription depth. The magnitude of the effect is proportional to the thickness of air gap. For a 2 mm air gap, higher isodose lines were observed to shift (~1 mm) towards the phantom surface. For lower isodoses, effects were negligible (Figure 4B).

Effect of Air Cavities on dose distribution: Dose enhancement due to 1-4 mm cylindrical air cavities ranged from 10% to 35% (Figure 5A,B). 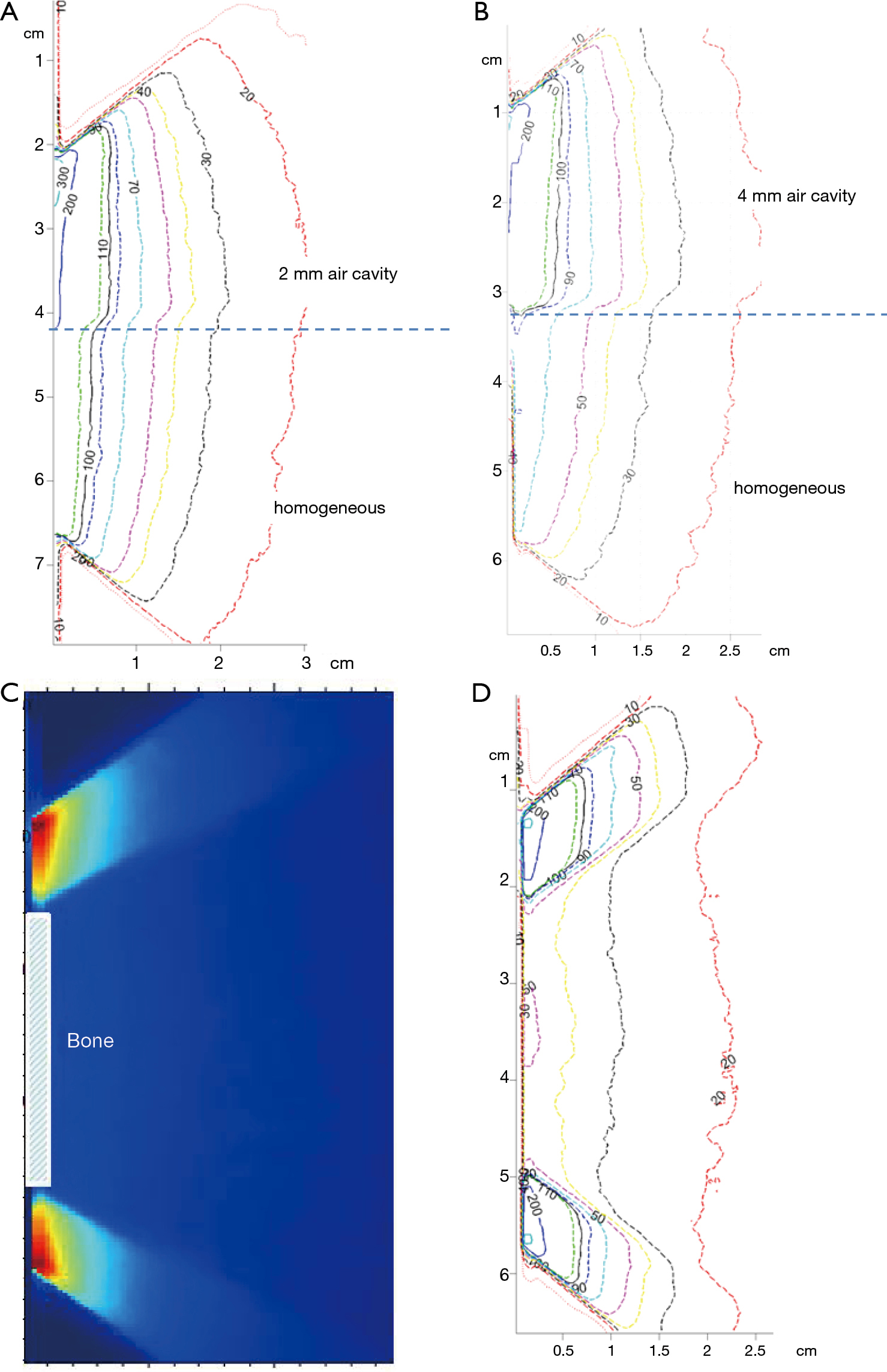 Figure 5 Effects of 2 mm air-cavity (A), 4 mm air-cavity (B) and 2 mm cortical bone (C) on dose distribution. For comparison, dose in a homogeneous medium (plastic-water) is also shown.

Overall, our results indicate that X-ray attenuation and scatter dominate at energies used in IORT. The effects were larger at the higher isodose curves (near the prescription depth) and were reduced with increasing depths. These results were validated with ion chamber measurements in water (Table 1).

Accurate assessment of dose delivered in IORT is essential in order to achieve consistent dose prescriptions, which are necessary for optimal treatment planning as well as for the reporting and evaluation of treatment response across different treatment centers. Quality assurance (QA) guidelines for electronic brachytherapy have recommended a 5%/1 mm tolerance in dose output/positioning (17-19). Such a high accuracy level may be however difficult to achieve in routine clinical practice due to inherent dose measurement uncertainties associated with low energy X-rays.

There are three potential sources of error in measured dose: steep depth-dose variation in a uniform density medium, tissue/air interface effects, and dose perturbation within and beyond heterogeneities (7). X-rays exhibit typical inverse square law behavior with distance from a point source. However, at low-kV energies, the dose fall off is faster than 1/r2 because of the additional attenuation caused by the medium. The effect is generally larger closer to the source and becomes less pronounced farther away. This steep dose gradient causes errors in dose measurement when an ion chamber is used. Dose measurement with films alleviates this problem and also has the advantage of yielding quick high-resolution planar dose distribution. EBT3 film is self-developing (therefore not prone to changes due to processing conditions) and tissue equivalent. However, the use of films as a dosimeter demands calibration of film response versus an ion chamber. In addition, film handling and processing requires careful attention to details. Recommendations for using appropriate ion chamber, films and phantom materials have been made (11).

In addition to attenuation, X-rays also experience beam hardening in water that can be up to 5% over 10 cm depth (7) The effect of tissue/air interface is a reduction in backscatter which leads to lower dose at shallow depths beyond the interface. If dose is prescribed near such an interface (for example, close to skin), this effect may be significant.

Finally, low energy X-rays used in IORT are susceptible to dose perturbations caused by variation in density and composition of the surrounding medium. There are three main interactions that define the dose variation at this energy: Raleigh, photoelectric, and Compton interaction. The photoelectric effect is highly dependent on the energy of photons and the surrounding medium. The effect, dominant at low-kV energies, varies as Z3/E3, where Z is the atomic number of the medium and E is the X-ray energy. This can produce changes not only in the medium surrounding the heterogeneity but also within the heterogeneity. For a high Z-medium, larger dose is deposited within the material with a corresponding loss of dose beyond the medium. The Compton Effect, being independent of Z, results in a bath of low dose throughout the treatment area.

We observed that our measured dose distributions were relatively insensitive to small air-gaps (<2 mm) between the applicator and phantom surface. The most important effect of air-gap was seen at shallow-depths where isodoses shifted slightly upstream (~1 mm). This observation seems to be a result of inverse square and tissue/air interface effects. Our results of measurements with angled applicator indicated that care must be exercised in aligning the applicator to the treatment area surface. The presence of an air cavity led to an increase in measured dose beyond the inhomogeneity. A 4 mm air-cavity may cause up to 35% dose enhancement at a prescription depth of 5 mm. Conversely, a 2 mm thick cortical bone resulted in a large (60%) decrease in dose beyond the bone. There is a corresponding increase in dose to the bone which was not investigated in this study.

The present results may be used to estimate and correct IORT dose in the presence of tissue inhomogeneities. These results are being validated with Monte Carlo dose calculations. It is expected that these will be incorporated into an image based treatment planning system in the future.

The presence of tissue heterogeneities near treatment area can lead to significant changes in doses for IORT with low energy X-rays. We have investigated the effect of commonly encountered materials: tissue, air and bone on IORT dose and provided an estimate of expected variation in dose.