Five patients with superior vena cava system invade by the mediastinum tumor have been treated our medical centre. All the procedures were proved by the Ethics Committee of Fujian Medical University Union Hospital (No. 2020KY009) and conducted in accordance with the Declaration of Helsinki (as revised in 2013). Written informed consent was obtained from all patients for publication of this manuscript and any accompanying images. All patients had evident symptoms of superior vena cava obstruction, such as facial edema, cervical edema, jugular vein engorgement, chest wall filled with venous collateral circulation. The preoperative central venous pressure (CVP) was 30 to 40 cmH2O (1 cmH2O =0.098 kpa) when lying on the elbow. High-quality thoracic CT image was essential, while the thickness of each level was less than 1 mm. Preoperative 3D-CTBA reconstruction of SVC, LBCV, RBCV and tumor lesions on the basis of high-quality thoracic CT indicated that SVC, LBCV and RBCV were partly or completely invaded and occluded. According to 3D-CTBA images, tumor size, local range of invasion, pathological type and vascular compression or obstructed points (SVC, LBCV and RBCV, beginning and ending position of each vessel) were accurately understood before the operation (Table 1).

With accurate knowledge of preoperative 3D-CTBA, namely tumor size, local invasion scope, the degree of vascular compression or blocked position (SVC, LBCV and RBCV, beginning and ending site of each vessel invaded), the whole process of operation were planned. The “Step-by-Step” approach proposed by our medical center was applied for designing the whole operation (Figure 1). By the display of the 3D-CTBA image, the anesthetists, cardiac doctors, intensive medicine doctors and thoracic surgeons conducted a more efficient multidisciplinary discussion together (Figures 2,3). An accurate preoperative surgical diagnosis guided by 3D-CTBA was made as follows: (I) the necessity of performing superior vena cava replacement; (II) the necessity of performing veno-venous bypass support from the left internal jugular vein to the left femoral vein; (III) the possibility of radical resection of invaded SVC, LBCV and RBCV and complete dissection of anterior mediastinal tumor in the light of the principle of “en-bloc”; (V) the choice of suitable materials, such as artificial blood vessels, bovine pericardium (5); (V) the length of the vessel which would be dissected; (VI) the method of vascular anastomosis. 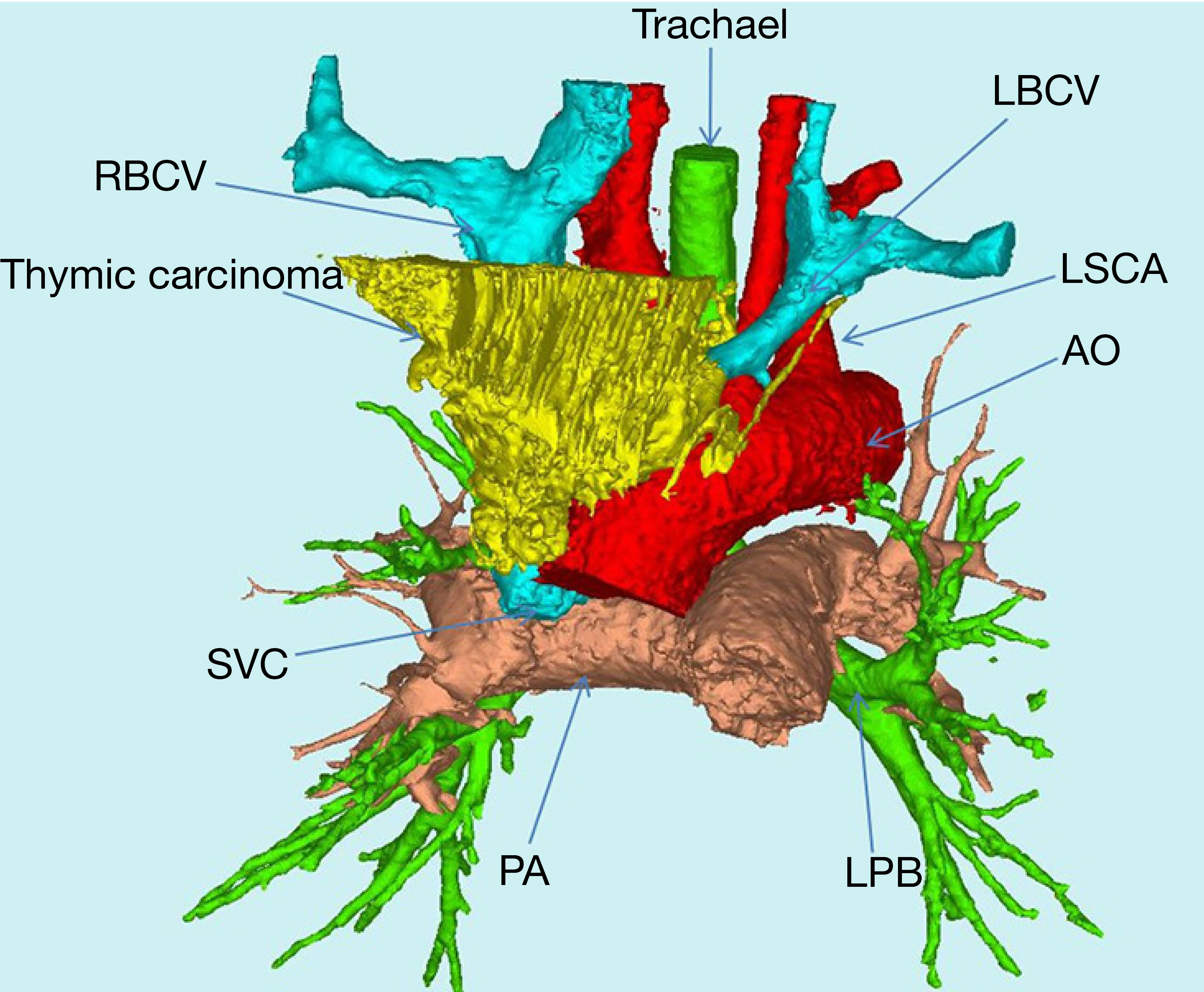 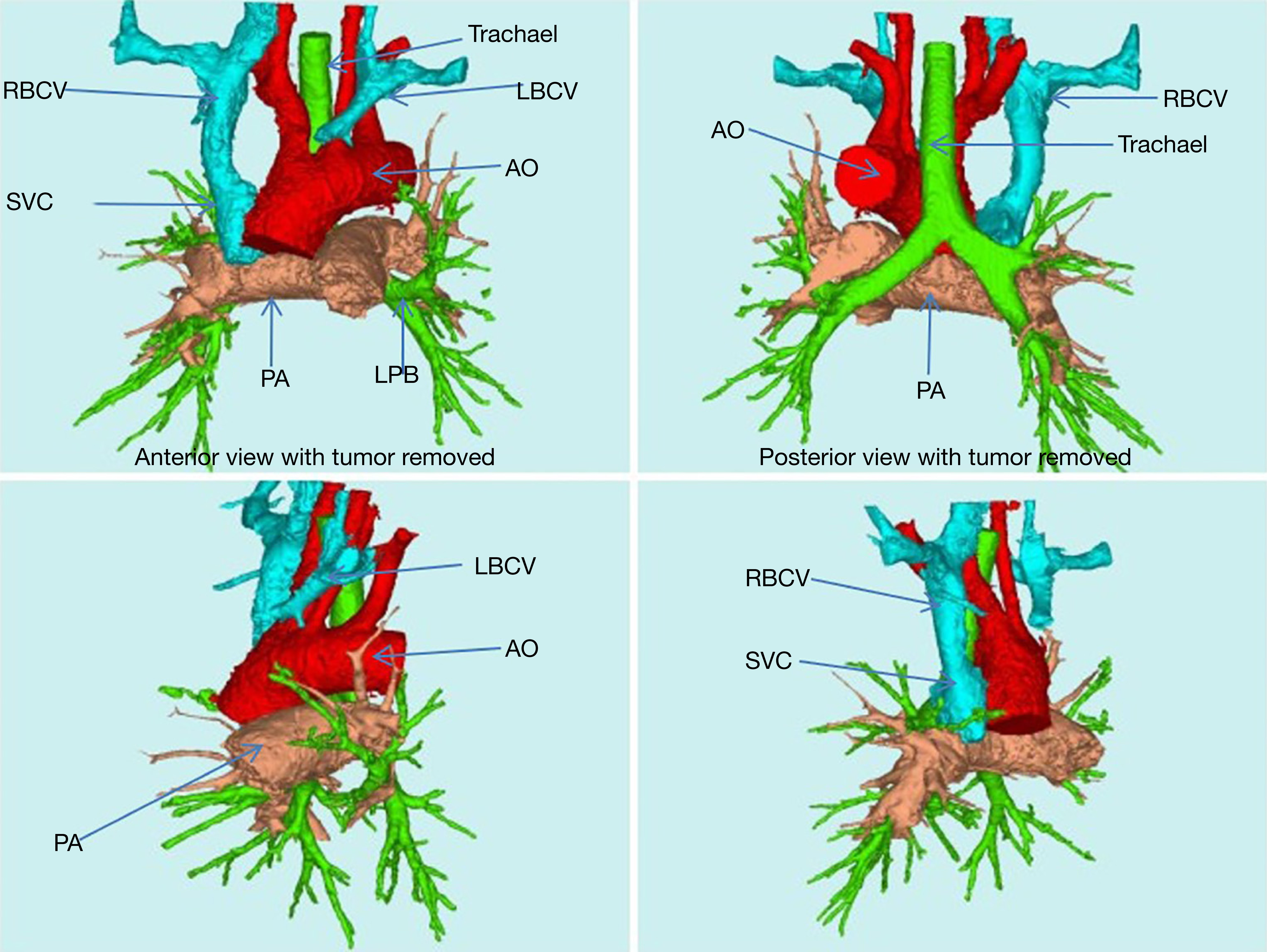 The actual operations of “total superior vena cava artificial vascular replacement” were conducted according to the planning process shown in Figure 1: veno-venous bypass support from the left internal jugular vein to the left femoral vein was performed in advance. The CVP of the SVC and the systemic blood pressure were monitored. Considering the level of CVP, two surgeries were performed with the veno-venous bypass opened. Once bypass was opened, CVP started to decrease, from a higher level of 30 to 40 cmH2O to a lower level of 15 to 22 cmH2O.

The operation adopted a median incision in the chest. Since the tumor in the anterior mediastinum thymus was obviously invaded, the pericardium was often opened and dissected upward along the superior vena cava and ascending aorta. If the lung was invaded, a wedgectomy or lobectomy should be performed. The phrenic nerve (at least one side) was preserved during isolation. LBCV and RBCV were dissociated as long as possible to carry out the replacements by artificial vessel. The posterior separation of the tumor mainly focused on the three branches of the aortic arch (brachiocephalic artery, left common carotid artery and left subclavian artery) and trachea. During the operation, LBCV and RBCV were clamped in different stages (Figure 4). The duration of unilateral vascular occlusion should be less than 45 minutes while each end-to-end vascular anastomosis can be completed within 15 minutes (6). 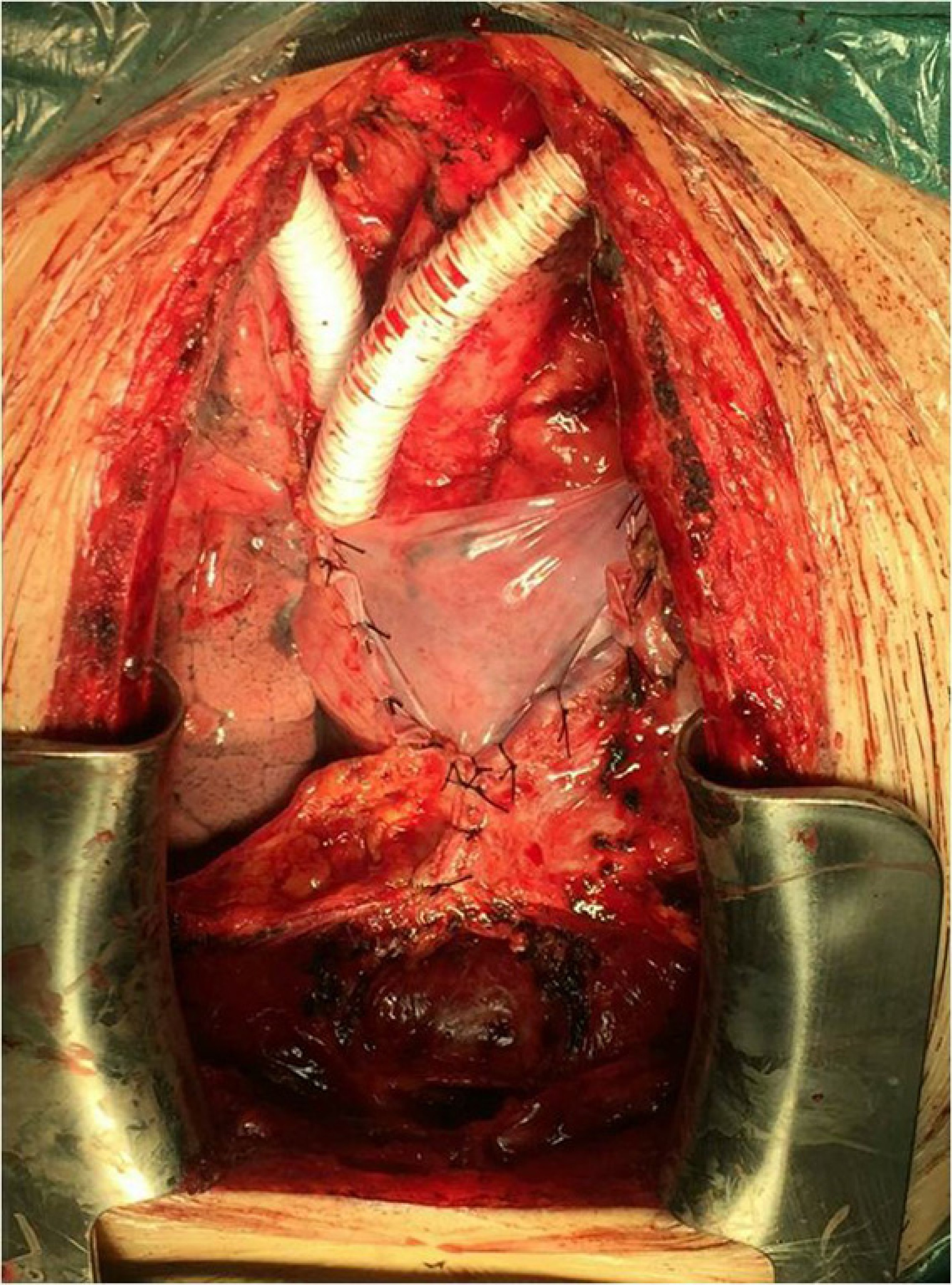 All patients underwent total superior vena cava reconstruction with the assistance of preoperative 3D-CTBA. Among them, 4 underwent bilateral PTFE vascular replacement (Figure 4). One patient (case 3) had complete occlusion of LBCV with a distal vascular diameter of only 6.53 mm. The distal diameter of RBCV was 16.99 mm (Figure 2) and there were only 10# PTFE grafts. After preoperative 3D reconstruction and MDT discussion, it was decided to prepare bovine pericardial patch for reconstruction in advance. The CVP still fluctuated between 25 and 30 cmH2O after the reconstruction with the 10# PTFE graft. When the bypass was closed, CVP increased to 35 to 40 cmH2O immediately. The bypass had to be reopened. Two vascular end-to-end anastomoses (RBCV and artificial blood vessel, SVC and artificial blood vessels) were demolished. The prepared bovine-pericardium patch was made into an artificial vessel (the diameter was about 2.0 cm). Self-made artificial vessel connected RBCV and SVC (Figure 5). CVP decreased to 18 to 20 cmH2O after re-reconstruction (5). After closing the bypass, CVP didn’t rise obviously. All patients were transferred to the intensive care unit (ICU) and were discharged successfully. 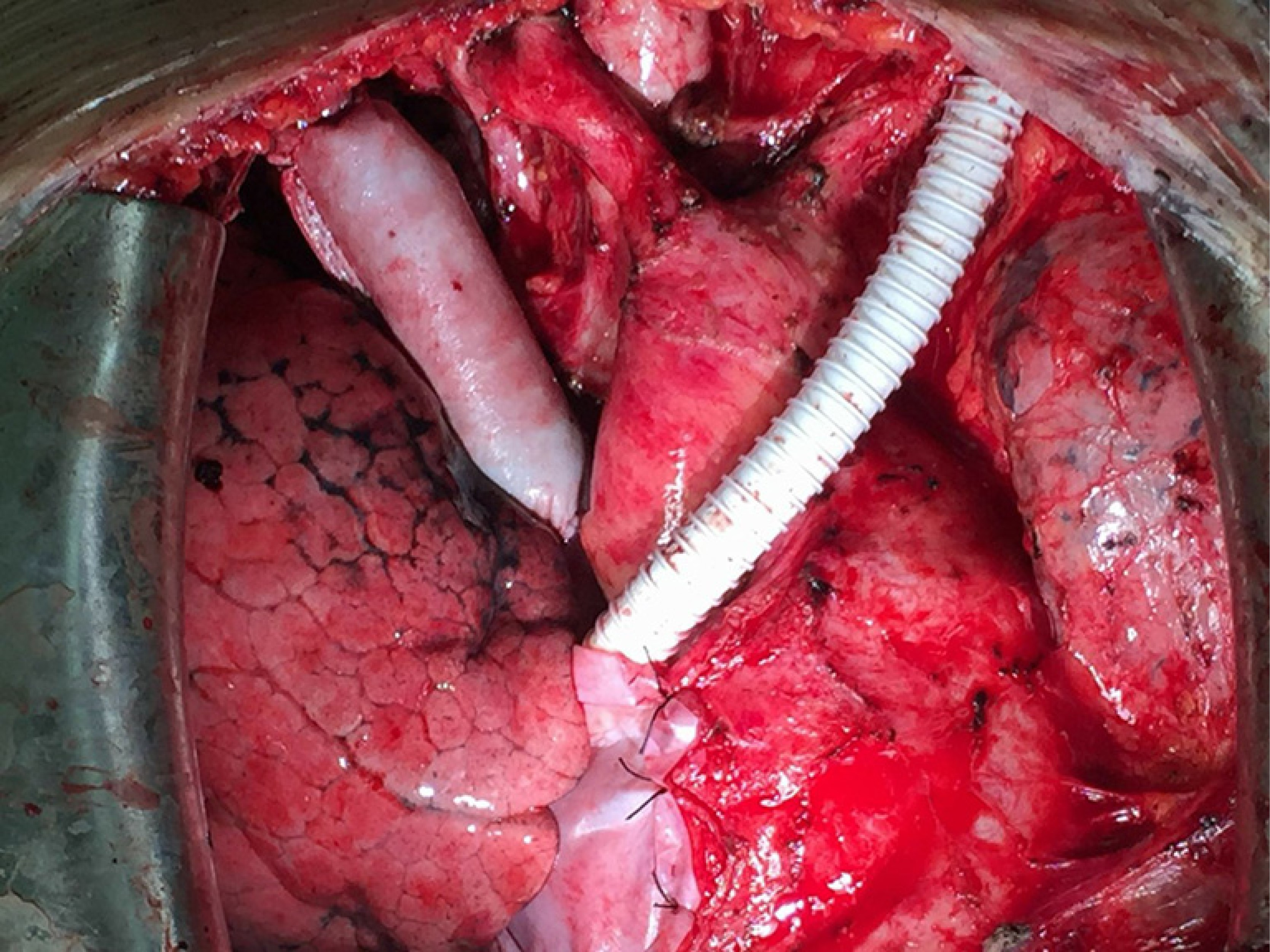 Figure 5 LBRV was replaced by 10# PTFE graft while RBRV and SVC were replaced by an artificial vessel made of bovine-pericardium patch.

Patents started to take warfarin for anticoagulant therapy immediately after surgery. APTT and INR were monitored through the dose of warfarin. INR was adjusted between 1.75 and 2.25. Chest CTA was conducted every three months within the first two years. 3D-CTBA was conducted to observe the recovery of four anastomotic stomas (Figure 6). The display of 3D-CTBA can clearly show whether there is stenosis or blockage. 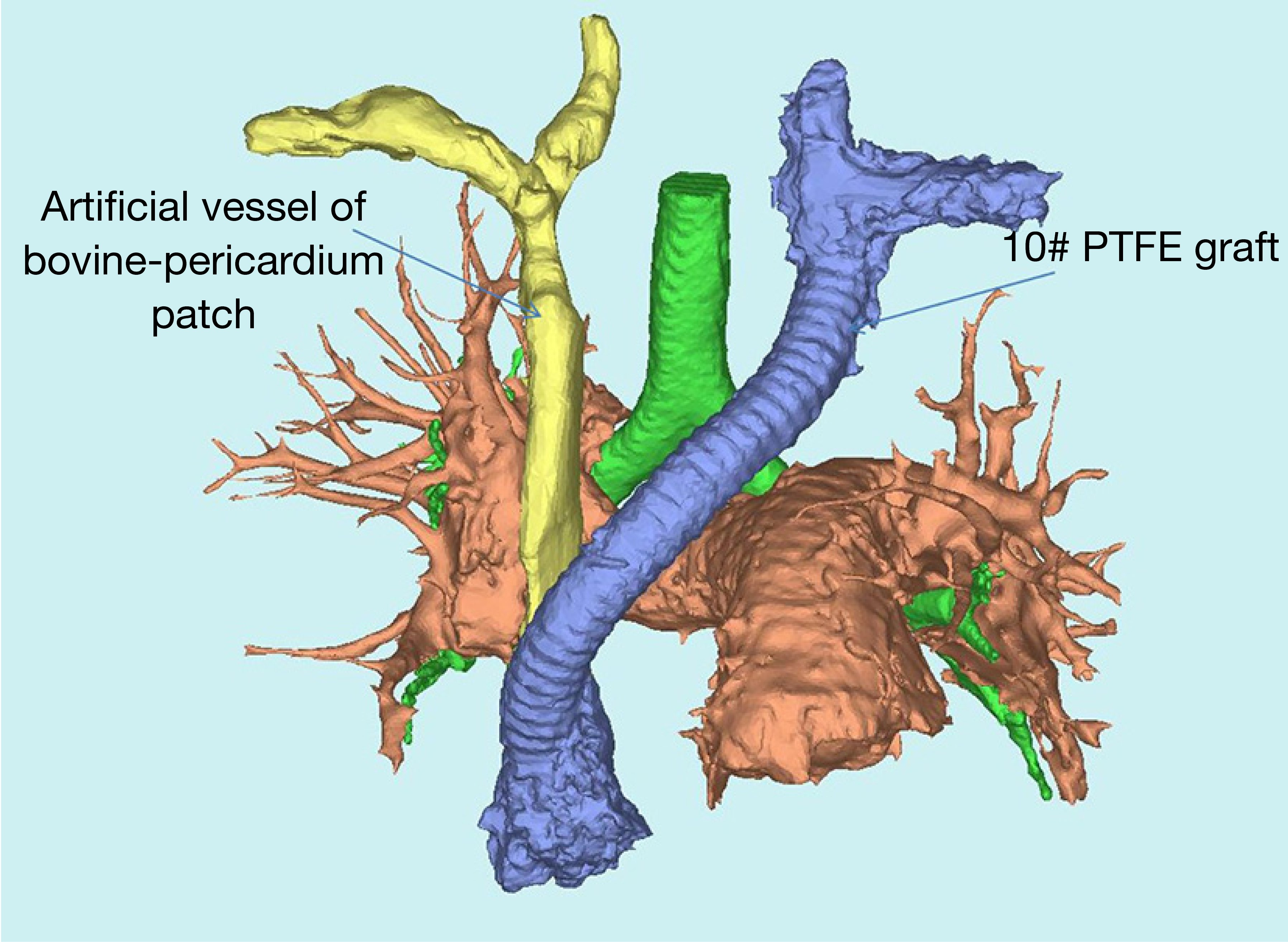 All the data were analyzed by SPSS20.0 statistical software. The data was described by and the t-test were used for statistical analysis. The difference was statistically significant at P<0.05.

There was no surgical mortality in this group. Symptoms of superior vena cava obstruction disappeared completely and the CVP was 12 to 20 cmH2O. Pulmonary infection occurred in two cases and radiotherapy or/and chemotherapy were selected for the 5 patients according to Masaoka stage after the surgery. The patients were followed up for 3 to 30 months and they were still alive now. The follow-up review showed that there was no recurrence of the tumor. They led a good quality of life (Table 2).

Table 2 Intraoperative and postoperative data of this group
Full table

The performance of radical resection of the operation for SVCS patients means satisfactory therapeutic effect (6). Although preoperative chest enhanced CT reveals adjacent relationship among mediastinal tumor, superior vena cava, aorta, and trachea, the “open and close” surgery or palliative resection may happen. Meanwhile, the necessity of superior vena cava replacement and the choice of artificial blood vessel depend on the probe result during the operation. Under such circumstances, we applied 3D-CTBA in the preoperative planning, the operation, postoperative follow-up of superior vena cava replacement. The key advantages of this technology could be summarized as follows.

The assisting judgment of 3D-CTBA was achieved on the basis of clear images of CTA; Mask was precisely established in different positions or different organs. An accurate 3D image was reconstructed through the calculation of the precise mask. With the assistance of 3D-CTBA, the anatomic relationship between the tumor and the vessels could be observed by the simulated removal of tumor tissue (Figure 3). The proximal end of LBRC was completely invaded and blocked, while the RBCV and SVC were partly involved. By such assistance and judgment, the tightest point of tumor adhesion can be predicted before the operation and the dissociation during the operation would be dealt with more prudence. We would clamp the vessels in advance and open the bypass to reduce the amount of blood loss, improve the safety of the operation and dissect tumor radically.

3D-CTBA can identify the relationship among tumor, lung, trachea, aorta and its three branches. The relationship between mediastinal tumor and important organ can be shown more clearly in 3D-CTBA before surgery, comparing with conventional enhanced CT. To avoid unnecessary injury to vital organs, the dissociation during the operation would be dealt with more prudence under the guidance. At the same time, the radical resection of tumor tissue and other invaded organ could be predicted by 3D-CTBA. In this group, two patients underwent wedge resection in the right upper lung.

The method of reconstruction is determined by accurate Judgment through preoperative 3D-CTBA. Before the surgery, the degree of vascular compression or the site of obstruction can be fully understood by 3D-CTBA reconstruction (Figure 3, the beginning and ending of superior vena cava, LBCV and RBCV obstructed). With the assistance of preoperative 3D-CTBA, an appropriate length of imported artificial vessels was selected to avoid the following two conditions: (I) large anastomotic tension caused by short artificial blood vessels and (II) thrombosis after anastomosis caused by the over length of artificial blood vessels. At the same time, external thread compression makes the artificial blood vessels less likely to be compressed by the lung and mediastinal tissue, preventing occlusion and deformation. However, mismatching of vascular caliber in reconstruction is prone to postoperative “blood steal”, which leads to the decrease of blood flow in the vessels with fine caliber after the surgery. And further thrombosis and vascular occlusion may be induced. In the past, the heights and weights of the individual patients were the only criteria in choosing the size of artificial blood vessels. Generally, diameter of RBCV and SVC range from 1.4 to 1.0 cm, diameter of LBCV 1.2 to 0.8 cm. At present, when surgical planning is conducted through 3D-CTBA reconstruction, the diameter, involved area and length of each blood vessel in the superior vena cava system can be fully measured, which promised the accurate selection of blood vessels. At the same time, excessive waste of medical resources will be avoided, reducing the financial burden of patients. Therefore, the application of 3D-CTBA makes the complex vascular reconstruction process more precise, flexible and controllable.

Safety & efficiency of the whole procedure

Between June 2016 and December 2018, another 29 patients were diagnosed with the mediastinum tumor, which located close to superior vena cava system in the same medical group. 3D-CTBA was also conducted in these patients. Comparing with conventional CT images, 3D images promised accurate diagnosis that these twenty-nine patients did not need the replacement of superior vena cava before the operation. It was also proved that these mediastinal lesions could be isolated and dissected radically by VATS.

3D-CTBA also makes MDT and surgical cooperation more effective. With 3D-CTBA, all the doctors, including thoracic surgeon, anesthesiologist, ICU doctors, cardiac surgeon, and nurses would communicate effectively. In addition, patients were followed up by using 3D-CTBA so that the thoracic surgeon can follow-up the recovery of four anastomotic stomas (Figure 6). The display of 3D-CTBA can clearly show whether the anastomosis is too narrow or not. Thus, the surgeon would adjust the dosage of anticoagulant drugs according to coagulation function.

Although advantages of this technology were summarized as above, this favorable early clinical experience warrants further study.

Thanks Lin Gaojie for proofreading.

Conflicts of Interest: All authors have completed the ICMJE uniform disclosure form (available at http://dx.doi.org/10.21037/tcr-19-2249). The authors have no conflicts of interest to declare.

Ethics Statement: The authors are accountable for all aspects of the work in ensuring that questions related to the accuracy or integrity of any part of the work are appropriately investigated and resolved. The study was approved by Institutional Ethics Committee of Fujian Medical University Union Hospital (No.2020KY009) and conducted in accordance with the Declaration of Helsinki (as revised in 2013). Written informed consent was obtained from all patients for publication of this manuscript and any accompanying images.