Effect of breast cancer as the first or second primary cancer on the prognosis of women with thyroid cancer: a SEER database analysis

The American Cancer Society (ACS) estimates that breast cancer (BC) will be the most common new cancer among women in 2020, accounting for 30% of new cancer diagnoses, and thyroid cancer (TC) will be the 5th most common, accounting for 4% of new diagnoses (1). Many studies have extensively demonstrated the relationship between these two cancers in women (2-6). The overall prognosis of TC is relatively good, with 5- and 10-year survival rates of 95–97% (5). However, due to the high incidence and favorable prognosis of TC, many survivors are at risk of developing a second primary cancer. A previous study reported that among the TC survivors, BC was the second primary cancer in 35% of the cases, and patients were at the highest risk of developing BC (7). The ACS previously estimated that there would be 276,480 new cases of BC among women in the United States in 2020, with 42,170 deaths from the disease (1). Early diagnosis and treatment improve the prognosis of BC patients. However, a previous study reported that women with BC had a significantly higher risk of developing a second primary cancer than the general population (8). Among the patients with BC, the incidence of TC was 0.28% (9).

Previous studies have evaluated the association between BC and TC (2-6,10,11), and several studies have assessed the prognosis of BC as a second primary cancer in patients with TC. Cheng et al. found that a history of TC had a strong protective effect on BC-specific survival (12). Kuo et al. found that BC was less histologically aggressive in TC survivors (5). Other studies have also assessed the clinical characteristics of TC as the second primary cancer in patients with BC. Li et al. showed that the risk of TC development in patients with BC was higher than that in the general population (13), and Huang et al. showed that the BC survivors had a significantly higher risk of developing TC (10). Furthermore, Siołek et al. proposed that the aggregation of TC and BC might be related to the CHEK2 mutation (14); therefore, some people in the population will develop both BC and TC.

As mentioned above, most of the previous literatures discussed the influence of TC on BC, but few mentioned the influence of BC on TC. To further evaluate the relationship between TC and BC in women, we considered BC the influencing factor to assess its effect on the patients with TC. In the present study, we used case data from the Surveillance, Epidemiology, and End Results (SEER) database to investigate the effects of BC as the first or second primary cancer on survival among women with TC, considering the patients with only TC as the reference group. We present the following article in accordance with the STROBE reporting checklist (available at http://dx.doi.org/10.21037/tcr-20-2243).

The study was conducted in accordance with the Declaration of Helsinki (as revised in 2013). After signing the agreement and applying for a SEER account, we downloaded the SEER data software (SEER*Stat version 8.3.2) and case data. Since SEER is a publicly available database with anonymized data, ethical approval was not required. The study cohort comprised 134,785 women with TC who were registered in the SEER database (1974–2016). The patients were divided into the following three subgroups: TC only (TC group, n=128,888), BC after TC (TC2BC group, n=3,000), and BC before TC (BC2TC group, n=2,897).

The patients’ follow-up data were evaluated to calculate the rates of cancer-specific survival (CSS), overall survival (OS), and mortality rates per 1,000 person-years.

We used percentages to describe categorical variables, and the median and interquartile range (IQR) to describe continuous variables. Categorical variables were tested using Pearson’s chi-square test. If the continuous variables were normally distributed, use the independent group test; if not, the Mann-Whitney test was used. For all tests, P values <0.05 was considered statistically significant.

Differences in the demographic and clinicopathological characteristics of the TC, TC2BC, and BC2TC groups 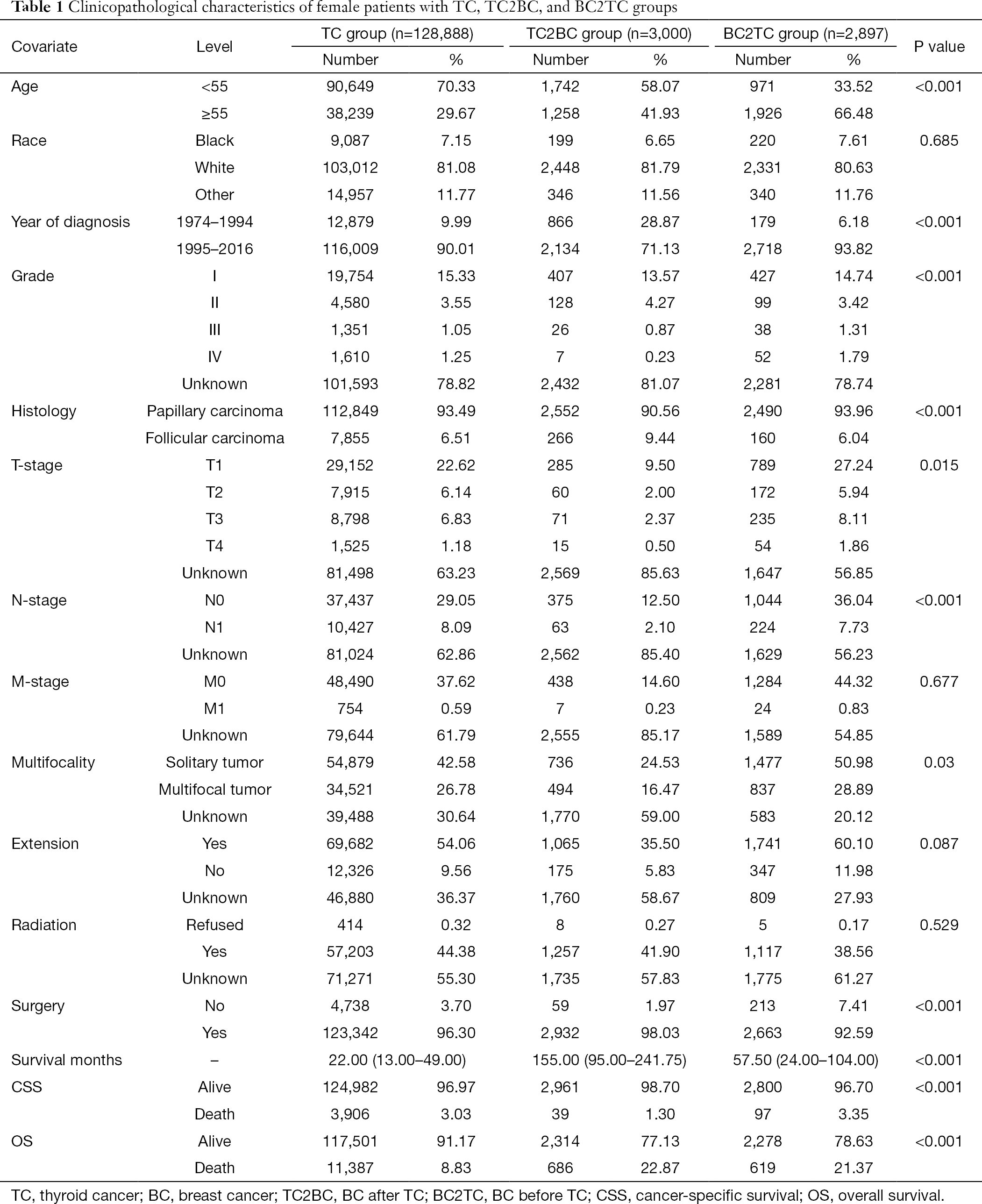 Cancer-specific and all-cause mortality in the TC, TC2BC, and BC2TC groups

Comparison of CSS and OS among the TC, TC2BC, and BC2TC groups

The Kaplan-Meier curves of the CSS and OS for the TC, TC2BC, and BC2TC groups are shown in Figures 1,2, respectively. We found statistical differences in the CSS and OS among the three groups (P<0.05). 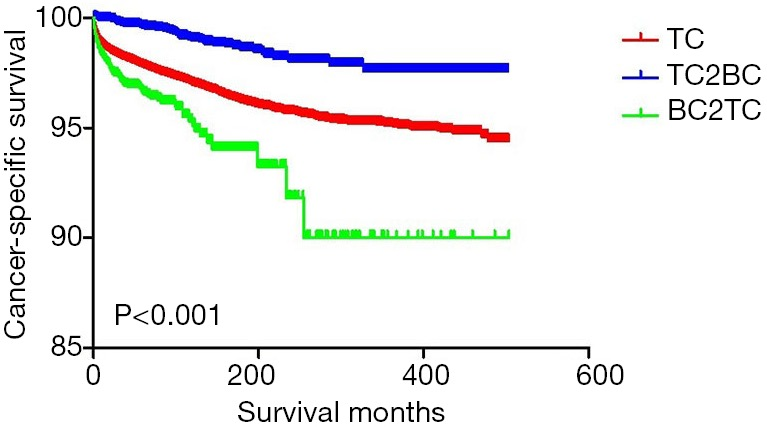 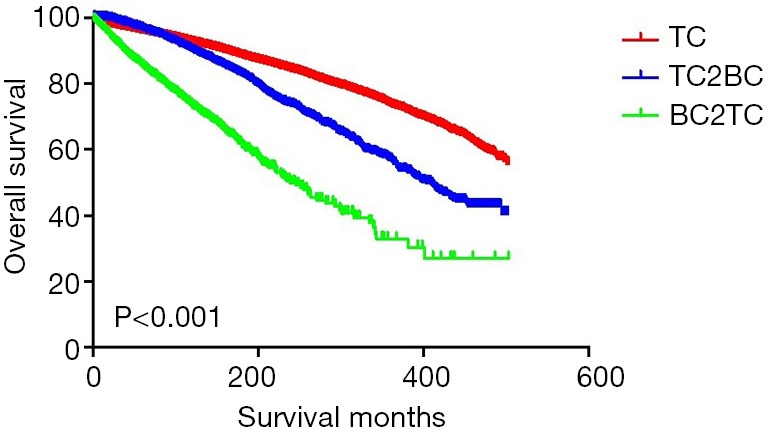 Previous studies have observed a correlation between BC and TC (2-6,10,11). This correlation is of great clinical significance for the BC and TC patients, as it may provide guidelines for the treatment of BC or TC as the second primary cancer, improve the prognosis of patients, and improve the survival rate. However, thus far, the effect of BC on TC has not been fully studied. Therefore, we selected the case data from the SEER database and considered the patients with only TC as the reference group to study the effect of BC as the first and second primary cancer on TC in women.

Marcheselli et al. showed that more than half of the BC2TC patients were diagnosed with TC within 3 years of BC diagnosis (9), and Kuo et al. found that the median time to the diagnosis of BC in patients with TC2BC was 5 years after diagnosis of TC (5). This difference in time to diagnosis may be related to the better prognosis of TC compared to that of BC. Furthermore, patients with BC are more likely to have thyroid-related examinations during the post-diagnosis follow-up observations, and minor thyroid lesions are likely to be detected in such follow-ups. In addition, low-dose L-thyroxine replacement therapy after TC may also be one of the reasons for the delayed time of BC diagnosis in patients with TC2BC (15).

Cheng et al. observed that a history of TC was a strong protective factor for BC-specific survival in the TC2BC patients (12). We found that in patients with TC2BC, BC also had a strong protective effect on the TC-specific survival. In a study by Sandeep et al., the risk of BC after TC increased over time, and there was no evidence that BC treatment increased the risk of TC (16). However, Zhang et al. found that the mean values of TGAb and TPOAb in the TC2BC group were higher than those in the TC group (17). A previous study showed that serum TPOAb and TGAb levels were significantly higher in the BC patients than in the general population (18). Therefore, we believe that the protective effect of second primary BC on TC might be related to the decrease in the levels of TPOAb and TGAb after BC treatment. However, more research is needed to explore this hypothetical link.

Lei et al. found that TC is a protective factor for the CSS of BC in the BC2TC group and speculated that TSH inhibition therapy is the cause of such protection (19). However, in this study, we found that BC is a risk factor for the CSS of TC in the BC2TC patients. Previous studies have reported that the risk and prognosis of TC may be related to the overexpression of ER and HER2 (20,21), which are common in BC. Therefore, we believe that the adverse effect of BC on the TC-specific survival may be related to these factors.

Our results showed that both BC2TC patients and TC2BC patients had higher HRs for OS than TC patients. It is logical that patients with two primary cancers have a lower OS than those who have only one primary cancer. We believe this may be due to the increased risk of complications associated with both types of cancer. Further research is needed to investigate the potential relationship.

There are some limitations of this study. First, the results of this study are heavily influenced by coding biases. This is particularly important because of the long timeframe over which this study was evaluated, during which time several definitions related to TC and BC have evolved. Second, in this study, we did not consider the effects of laboratory test results, genetic factors, recurrence, and surgical complications. Third, the study was based on a database rather than clinical data, which may have lowered the level of evidence. Fourth, since only women were selected for the study, it is not clear whether our conclusions would remain valid in men. Finally, this is a retrospective study that is prone to recall bias.

In conclusion, among women, BC as the second primary cancer has a significant protective effect on the CSS of TC patients, but when BC is the first primary cancer, it is a risk factor for worse CSS. BC is a risk factor for the OS of TC patients regardless of whether it is the first or second primary cancer, although it is a stronger risk factor for patients with TC after BC. According to our results, we believe that early diagnosis and treatment of TC in BC survivors should be further strengthened in clinical work, so as to improve the prognosis and survival rate of BC2TC patients. But further basic and clinical studies are needed to explore more potential relationships between TC and BC.

Reporting Checklist: The authors have completed the STROBE reporting checklist. Available at http://dx.doi.org/10.21037/tcr-20-2243

Conflicts of Interest: All authors have completed the ICMJE uniform disclosure form (available at http://dx.doi.org/10.21037/tcr-20-2243). The authors have no conflicts of interest to declare.

Ethical Statement: The authors are accountable for all aspects of the work in ensuring that questions related to the accuracy or integrity of any part of the work are appropriately investigated and resolved. The study was conducted in accordance with the Declaration of Helsinki (as revised in 2013). Since SEER is a publicly available database with anonymized data, ethical approval was not required.