Salivary glands carcinomas comprise a morphologically diverse group of rare tumors of unknown cause (1,2). These malignant tumors account for 0.4–2.6 cases per 100,000 people in the USA. According to the National Cancer Data Base Report on Cancer of the Head and Neck in the USA, major salivary gland tumors accounted for 6% of all malignant tumours in the head and neck and 0.3% of all malignancies (2,3). Mucoepidermoid carcinoma (MEC) is the most common reported pathology of parotid cancer, comprising approximately 30% of all salivary malignancies (4). Approximately 60% of MECs originate from the major salivary glands (MSG), and the parotid gland is the predominant site (5).

Several studies have described the association between the clinicopathological characteristics, including age, tumor size, tumor grade, tumor stages at presentation, and lymph node or distant metastases and clinical outcomes of MSG-MEC. Surgery has been the principal treatment modality for salivary glands mucoepidermoid carcinoma and postoperative radiotherapy has been used for close or positive resection margins, high-grade tumors, T3–4 tumors, and neck node metastases (6).

The age distribution of MSG-MEC is unimodal, peaking in individuals aged between 45.78–57 years old (7-10). Whether different age groups of patients with MSG-MECs have different survival outcomes remains controversial. Koul et al. found that age >60 years were statistically significant predictor of disease-specific survival (11). However, Hocwald et al. showed that age had no effect on survival outcomes for patients older than 50 years old (12). Kupferman et al. showed the favorable results among pediatric patients (<19-years-old) with salivary gland malignancies, with marginal long-term complications (13). However, since MSG-MECs are relatively rare, we queried the Surveillance, Epidemiology, and End Results (SEER) database. Therefore, the objective of this study is to assess the clinicopathological features and prognostic value of age on overall survival (OS) and cancer-specific survival (CSS) for MSG-MEC patients. We present the following article in accordance with the STROBE reporting checklist (available at http://dx.doi.org/10.21037/tcr-20-2197).

The study was conducted in accordance with the Declaration of Helsinki (as revised in 2013). The study was approved by Fudan University Shanghai Cancer Center Ethics committee (reference number 1 410 140-8). Written informed consent was obtained from all individual participants included in the study.

We obtained data from the current SEER database, which consists of 18 population-based cancer registries, and the grading systems were based on grade codes in ICD-O-3. This database collects and publishes cancer prevalence and survival data covering approximately 28% of the total population in the United States. SEER*Stat Version 8.3.4 (http://www.seer.cancer.gov/seerstat) from the National Cancer Institute was used to identify eligible patients in this study. Because the SEER database began collecting information on the presence or absence of metastases at the time of diagnosis in 2010, we included patients diagnosed with microscopically confirmed MSG-MEC between 1 January 2010 and 31 December 2014. We selected patients with only one primary malignancy in their lifetime. We excluded patients mainly because of lack of pathology type of tumor, unknown racial information, unstaged tumors or ‘blanks’ metastatic site. In total, 729 MSG-MEC patients were eligible for inclusion in the prevalence analyses.

Descriptive statistics were used to examine the baseline characteristics of the patients. The primary study outcomes were OS and CSS. OS was defined as time to the date of death due to any cause or the date of last follow-up. CSS was defined as time from initial treatment to death due to cancer. Kaplan-Meier survival curves were compared using the log-rank test. Hazard analysis was conducted using the Cox proportional hazards model. SPSS software, version 22.0 (SPSS, Chicago, IL, USA) was used for additional data processing. A probability value (P value) of <0.05 was considered statistically significant for all tests.

Clinical characteristics of all patients 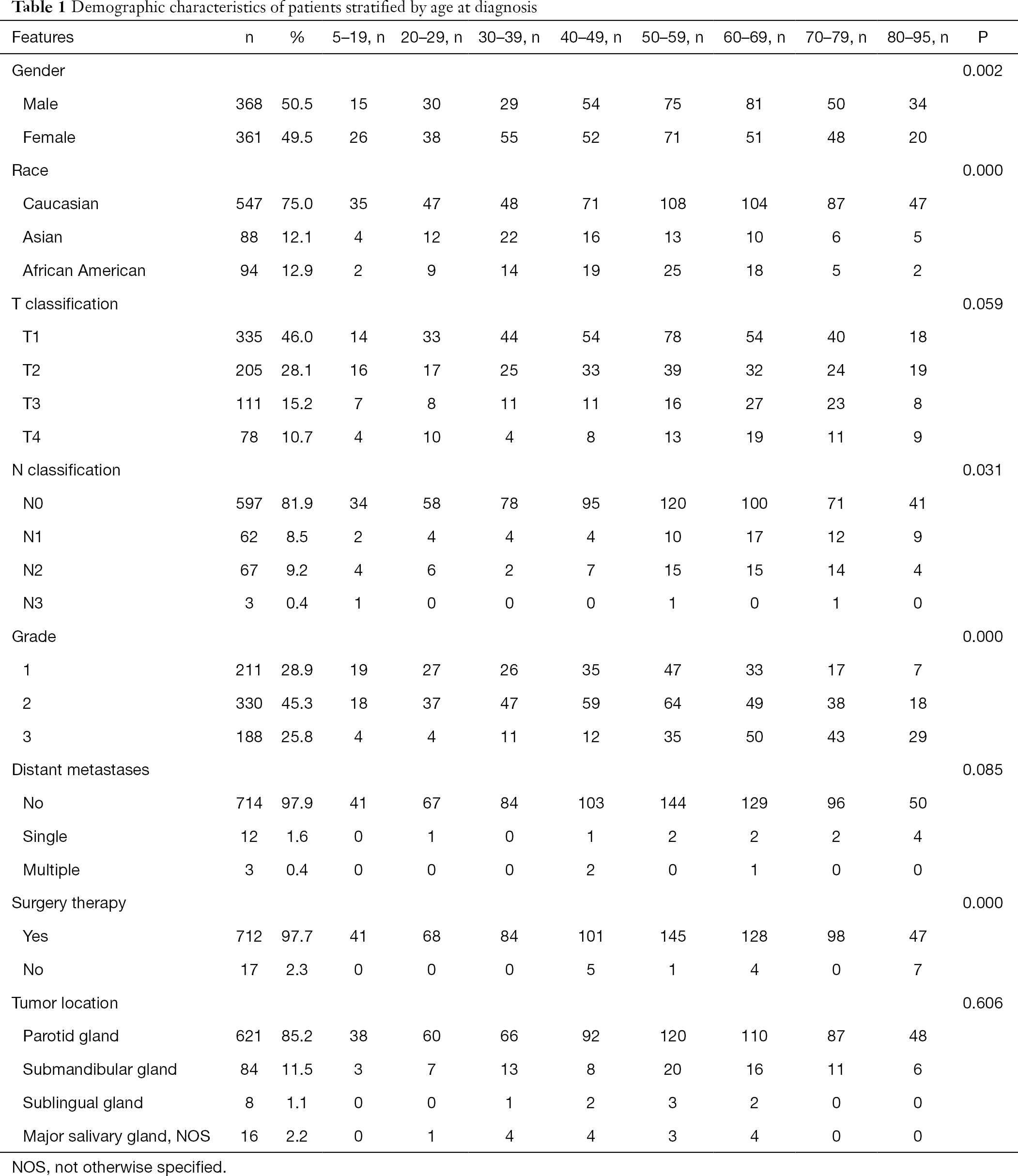 The overall mean follow-up of all patients in the cohort was 26.0 months (range, 0–59 months). Since the time of follow-up is short, we estimated the 3-year OS and CSS for patients. In the univariate analysis, gender, age, tumor grade, T category, N category, distant metastases and surgery therapies were significantly associated with OS and CSS (P<0.05). The patients aged 15–29 had better survival rates, and the risk of death became higher with increasing age (Table 2). 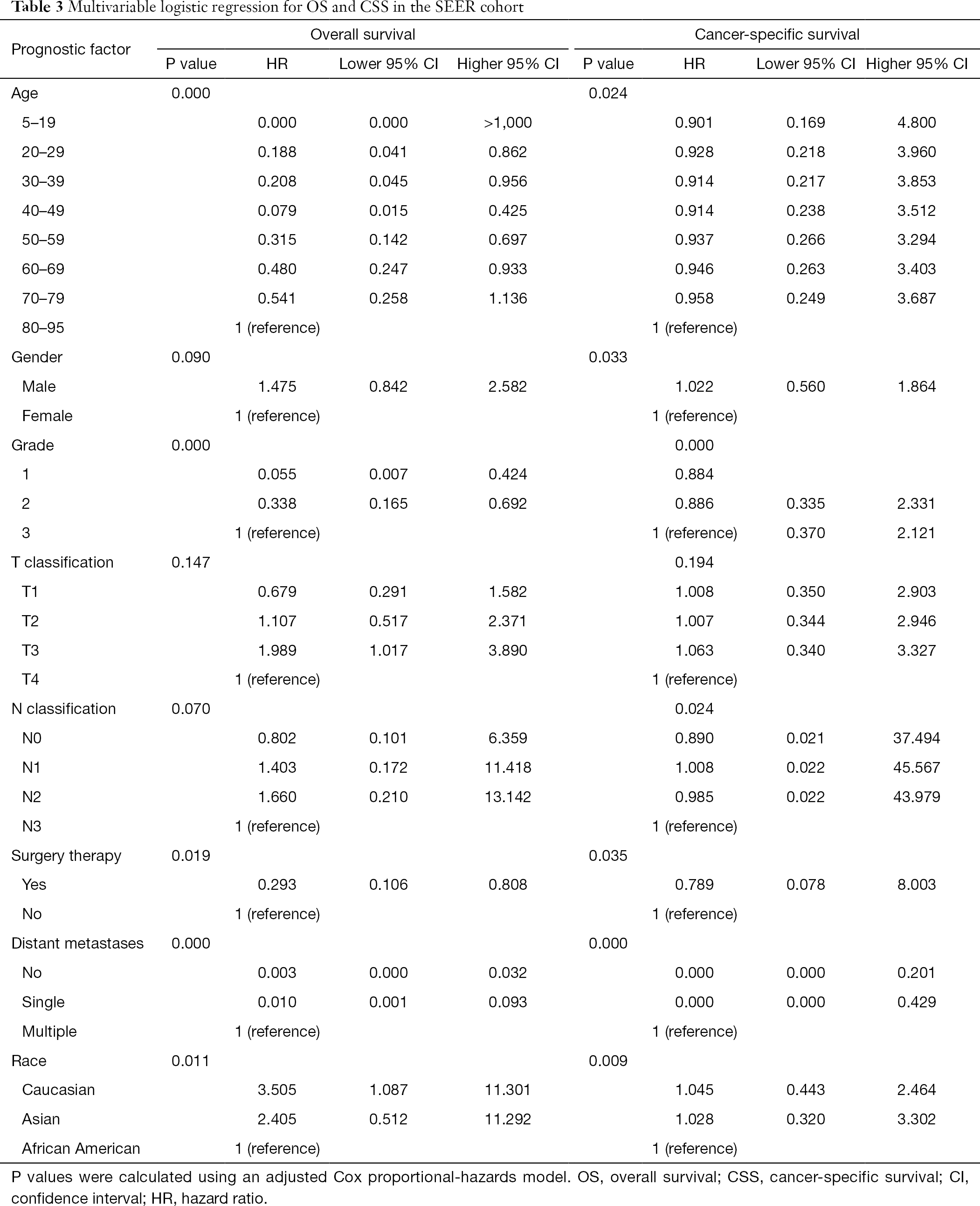 Subgroup analysis of the relationship between age and survival

Multivariate Cox regression analysis demonstrated that variables, including gender, age, race, grade, N classification, surgery therapies and distant metastases were all independent prognostic factors of OS and CSS. To rule out the effects of these variables and further validate the effect of age on OS and CSS, we conducted the subgroup analysis based on these variables (Table 4). Remarkably, subgroups analysis shows that the effect of advancing age was significantly associated with a higher risk of poor survival in Caucasian who harbored N0 classification (P<0.001), non-metastatic disease (P<0.001) or received surgery (P<0.001). 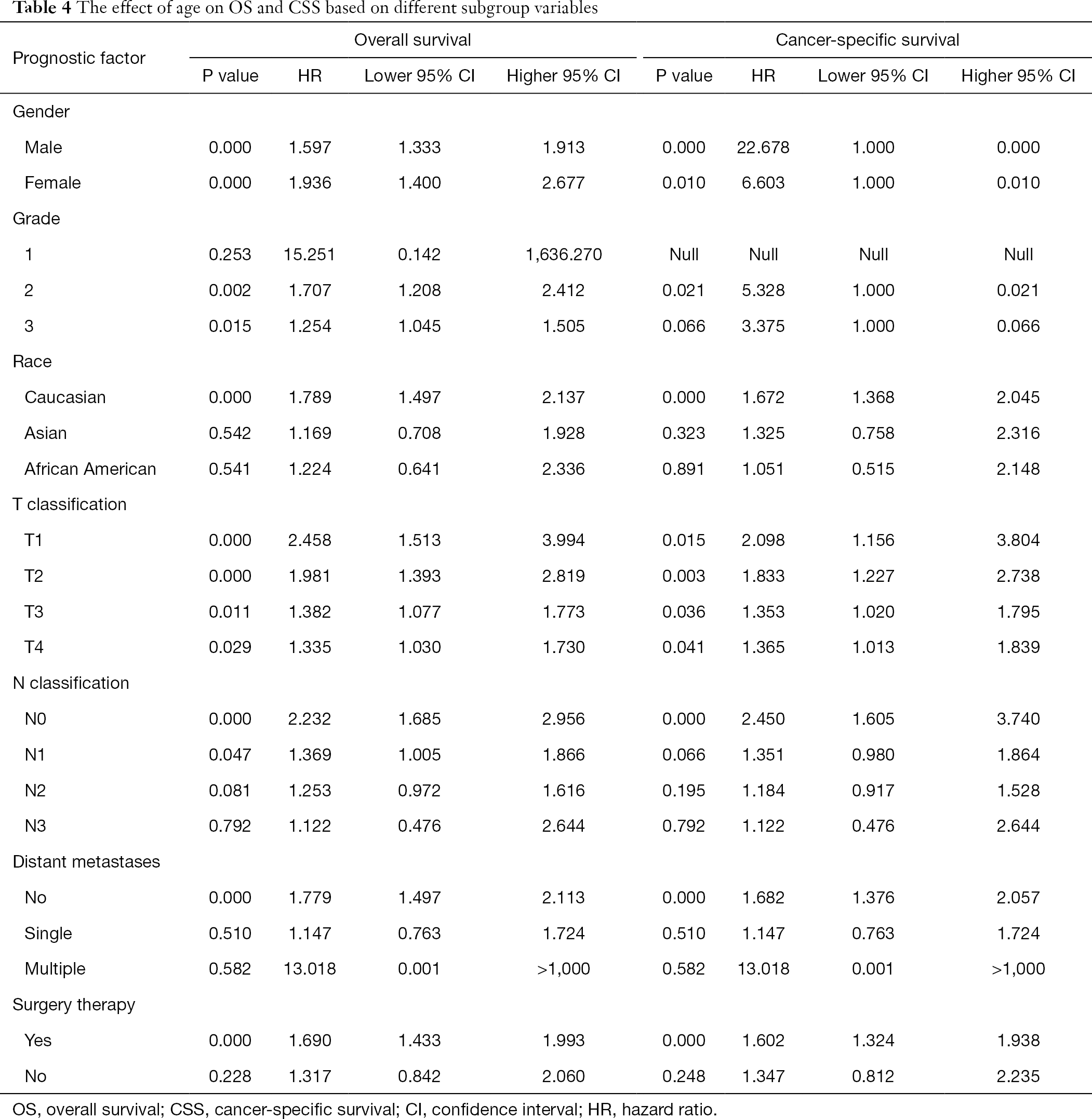 In this study, 729 patients with major salivary glands MEC were evaluated and we observed different age groups have distinct clinical manifestations. For instance, similar to results from other series, younger patients tended to be female and older patients tended to be male (14-16). These findings raise the possibility that hormonal influences may be important to the development of MECs. The evidence linking carcinomas of the major salivary glands to occupational exposures is sparse, and it is plausible that the more prominent rise in incidence of carcinomas of the major salivary glands at older ages among males compared to females, may reflect occupational exposures in male-dominated jobs.

In the present study, younger patients tended to present with low grade disease. Brandwein et al. (17) and Liu et al. (18) also reported the mean age to be lowest among patients with a low-grade tumor, while those with a high-grade tumor were older, which is similar to results from our series.

Several studies have reported age was significantly associated with OS. However, a myriad of cut-off points have been employed, including 56, 40, 62, or 50-years-old (6,11,12,19,20). Koul et al. found that age >60 years were statistically significant predictor of disease-specific survival (11). However, Hocwald et al. showed that age had no effect on survival outcomes for patients older than 50 years old (12). Kupferman et al. showed the favorable results among pediatric patients (<19-years-old) with salivary gland malignancies, with marginal long-term complications (13). The conflicting results may be related to the heterogeneity of the patients’ cohorts, sample size, different treatment strategies and critical point definitions. However, all these authors did not further analyze the impact of different age groups. Our study classified all patients using 8 age groups and further clarifies the clinical manifestations and treatment outcomes according to age stratification.

A variety of factors may influence the effect of age on survival. More younger patients received surgery, radiotherapy and chemotherapy, and were less likely to have serious comorbidities, such as cardiovascular and pulmonary diseases, resulting a higher treatment completion rate and better treatment outcome (21). Additionally, older age is associated with decreased immune function, which not only promote the development of cancer, but also weaken the hosts’ immune response to disease. In our study, we assessed CSS as the end-point to reduce the potential impact of deaths not related to cancer and our study suggests the patients aged 5–19 had better survival rates, and the risk of death became higher with increasing age. These findings suggest that MSG-MEC in younger adults exhibits distinct biological behavior. One theory partly explains the increased incidence of cancer in the elderly is that in the context of immune aging and long-term exposure to environmental factors such as tobacco or alcohol. This difference in exposure and immune aging may lead to biological differences in solid tumors between older patients and younger patients (22-24).

This is the first population-based analysis assessing clinicopathological features and prognostic value of age on OS and CSS for MSG-MEC patients. Some limitations of our study should be acknowledged. First of all, retrospective analysis may contribute to some bias. Second, the lack of data on additional predictors of OS such as performance status, comorbidities, tobacco smoking and alcohol consumption, prevented us to adjust our analyses for these important factors. Finally, also due to the data limitations of the SEER database, local invasion, tumor size and positive surgical margins at final pathology were not able to be analyzed between age at diagnosis and CSS in this study.

Younger patients tended to be female and present with low grade disease and less-advanced N classification. The risk of death became higher with increasing age. However, when considering patients affected by more aggressive disease, age was not significantly associated with higher risk of dying from MSG-MEC. In high-risk patients, tumor characteristics rather than age should be considered when making treatment decisions.

We acknowledge the support of the Department of Radiation Oncology, Fudan University Shanghai Cancer Center. The views expressed in this publication are those of the authors.

Reporting Checklist: The authors have completed the STROBE reporting checklist. Available at http://dx.doi.org/10.21037/tcr-20-2197

Ethical Statement: The authors are accountable for all aspects of the work in ensuring that questions related to the accuracy or integrity of any part of the work are appropriately investigated and resolved. The study was conducted in accordance with the Declaration of Helsinki (as revised in 2013). The study was approved by Fudan University Shanghai Cancer Center Ethics committee (reference number 1 410 140-8). Written informed consent was obtained from all individual participants included in the study.