Nevertheless, the safety issues relating to minimally invasive thoracic surgery remain a concern (8,9). Significant bleeding caused by vascular injury is dangerous and, in most instances, happened in the early stage of learning curve (10). It is reported that vascular injury result in 29–45% of incidences of conversion to thoracotomy in minimally invasive pulmonary surgery (9-12). Therefore, we proposed a guiding tube modified from a two-way Foley catheter, and described the procedure to use this approach based on our experiences in robot-assisted right upper lobectomy.

From July 2018 to June 2019, this guiding method was adopted in a total of 31 patients who underwent RATS (robot-assisted thoracoscopic surgery) lobectomy. Patient demographics and perioperative parameters were collected from the institutional database, and the short-term follow-up were completed by postoperative visits or telephone calls. Descriptive statistics for continuous variables were reported as median (rang) and categoric variables summarized by percentage and frequency. The trial was conducted in accordance with the Declaration of Helsinki. The study was approved by Ethics Committee of West China Hospital of Sichuan University (No. 2020-979) and informed consent was taken from all the patients.

Feature of the guiding tube

As shown in Figure 1, the guiding tube consisted of two parts. A thin head was used to pass through the tunnel and a thick end was used to introduce the anvil jaw of linear stapler. Methods to modify the two-way Foley catheter was shown in Figure 1. We cut off the majority of the thin head of two-way 16Fr Foley catheter at an angle of about 30 to 60 degree and then cut off the side end along with its long axis. With such simple procedure, a guiding tube was created. 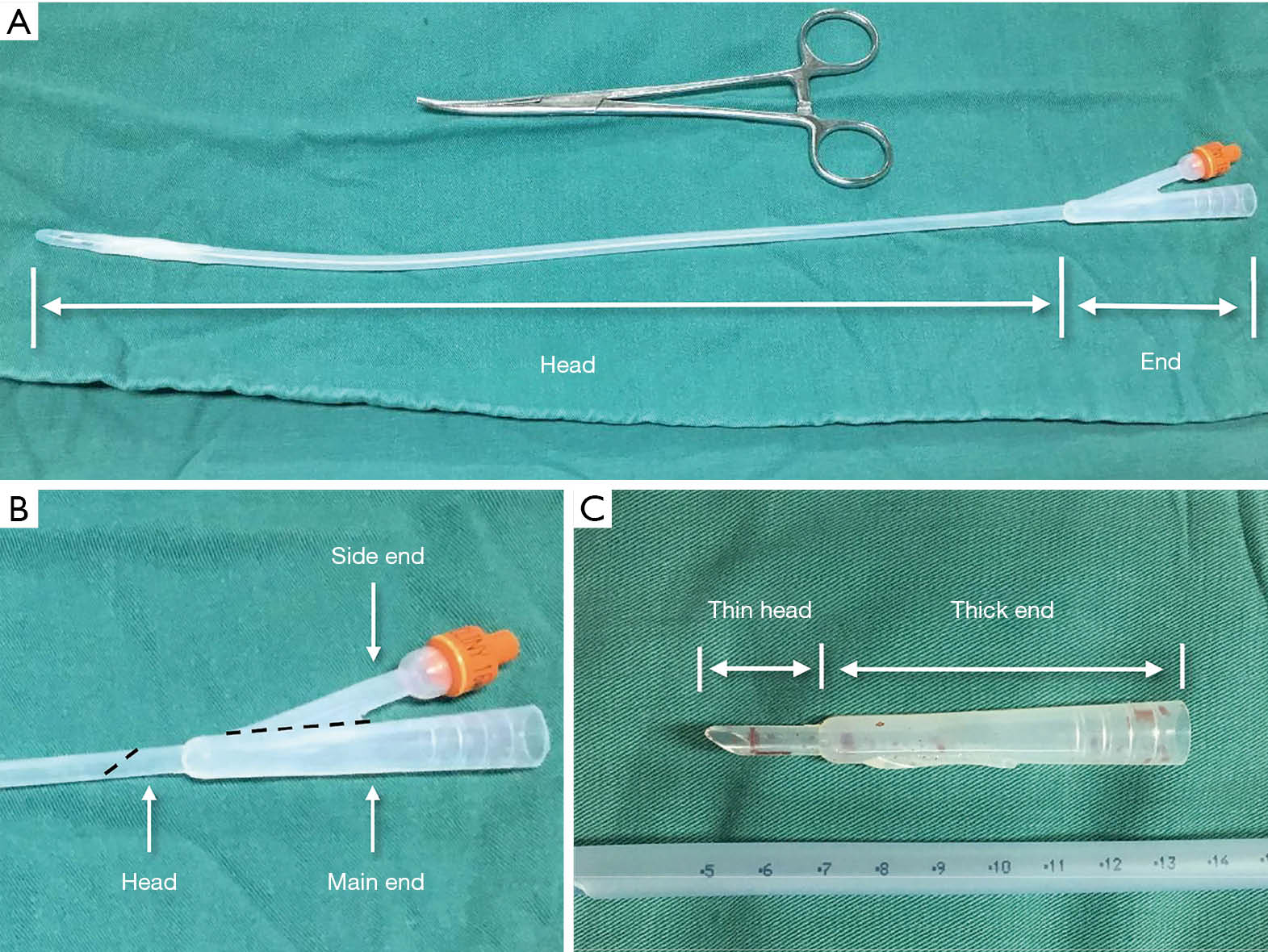 Usage of the guiding tube 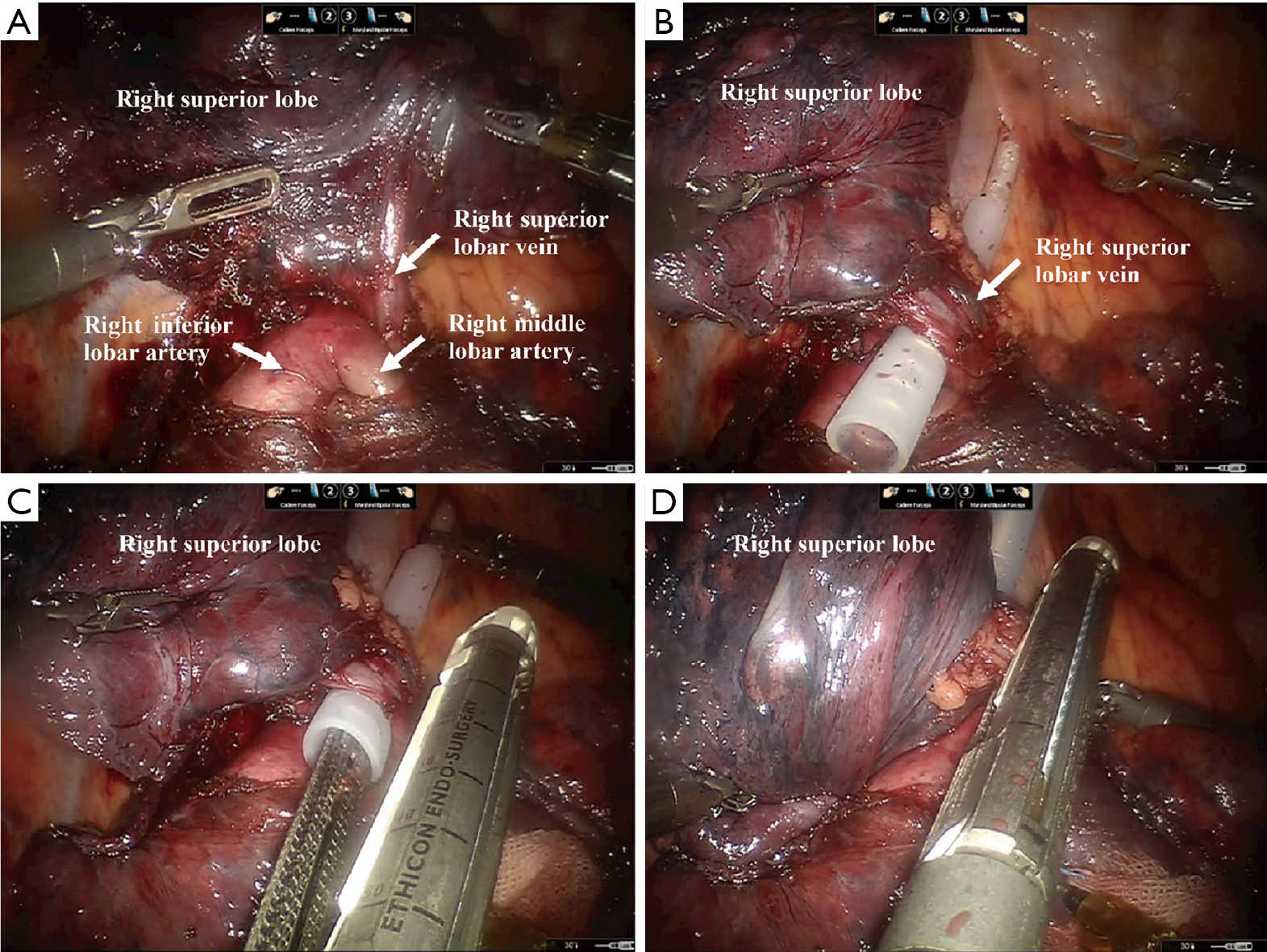 Figure 2 The process of dividing the right superior lobar vein guided by a modified Foley catheter. (A) The pulmonary vessel around the tunnel in which the linear stapler was planned to pass through. (B,C and D) Indicate that the linear stapler was successfully passed through the tunnel under the right superior lobar vein with help of the guiding tube. 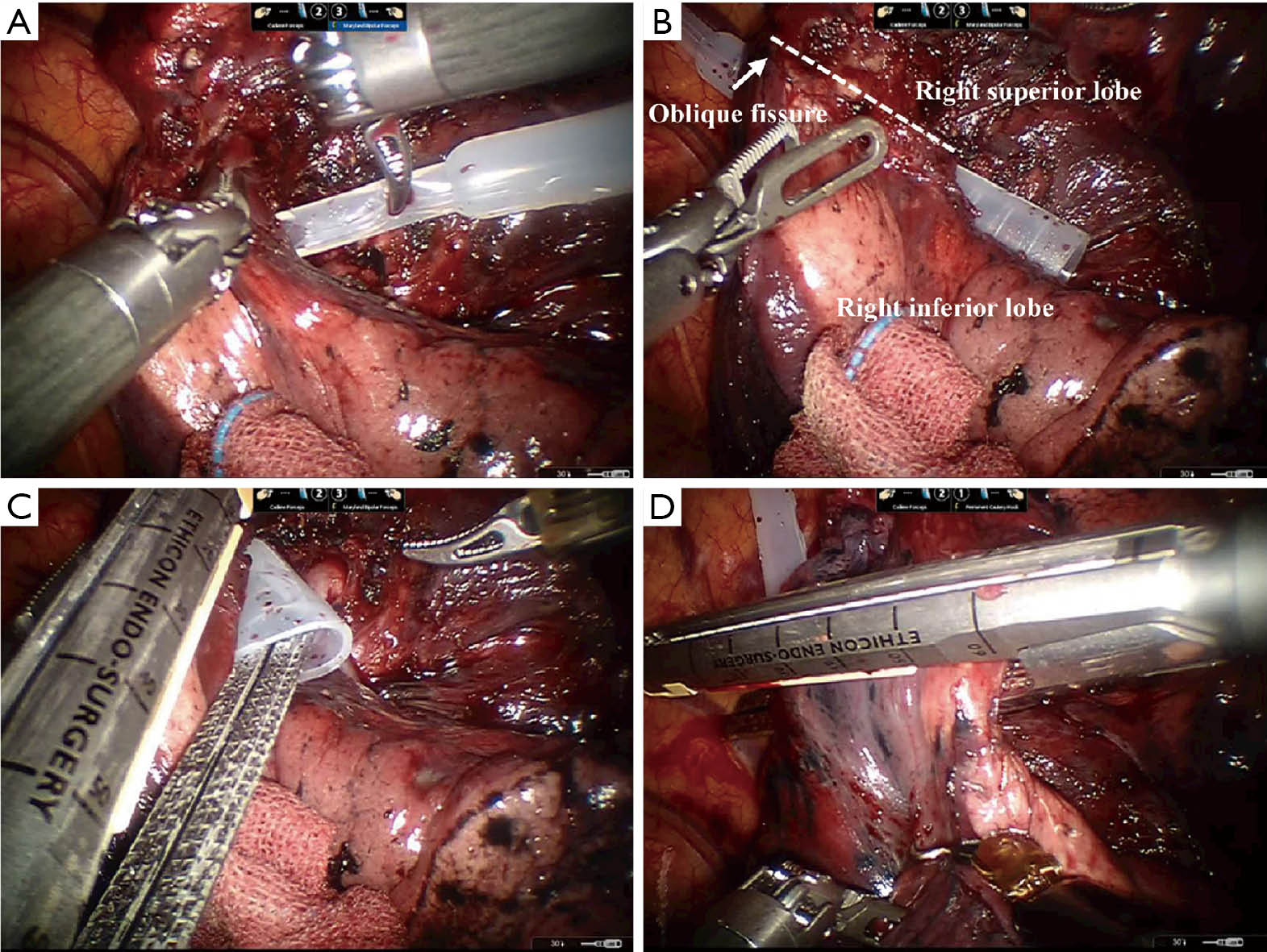 From July 2018 to June 2019, a total of 31 patients with a median age of 51.5 years old underwent robot-assisted lobectomy in the Department of Thoracic Surgery of West China Hospital, Sichuan University. The demographic characteristics and postoperative short-term outcomes are summarized in Table 1. The median surgical time was 180 min and the median loss of blood was 100 mL. Only one patient was converted to open thoracotomy for silicoanthracotic lymph nodes adhered in hilum of lung. The median duration of chest drainage was 3 days. There was no massive bleeding during and after operation. One patient suffered chylothorax postoperatively and was successfully treated by conservative treatment. The median length of hospital stay was 5 days. There was no mortality in 30 days after hospital discharge. 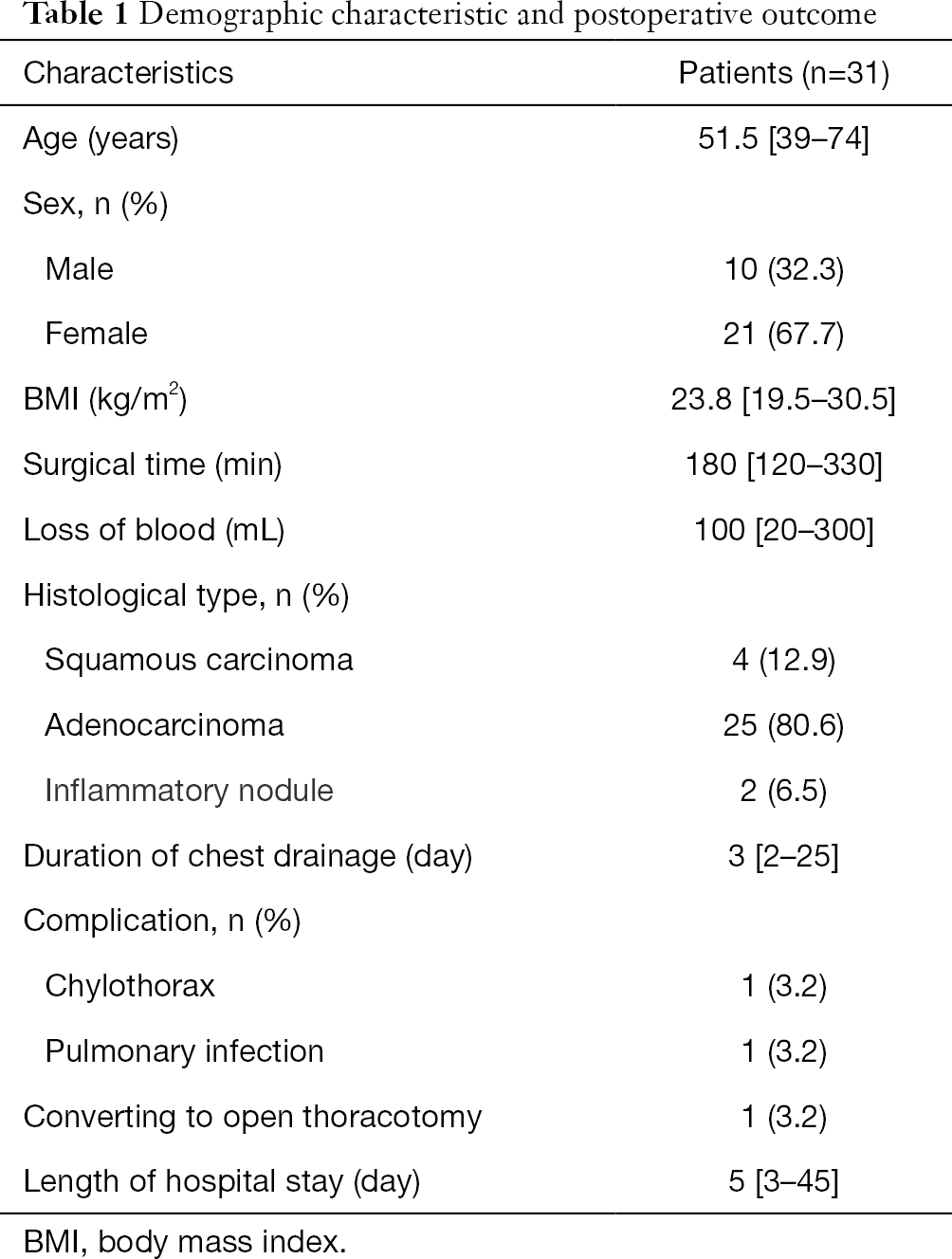 Although minimally invasive surgery has been widely adopted, the safety of minimally invasive pulmonary resection remains a major concern (8,9,13,14). Management of severe intraoperative complication such as vascular injury is generally thought as a weakness of minimally invasive pulmonary resection (4). Once the main vessel is injured during operation, conversion to thoracotomy is an unavoidable consequence in some scenarios (8,10,15,16). Published studies have indicated that adoption of linear stapler might be a potential causes of intraoperative vascular injury on the basis of direct injury and large tension caused by inappropriate direction of passing stapler and surrounding soft tissue that blocked the movement of the stapler (8,17,18).

It seems that robotic lobectomy accompanies less blood loss and lower rate of conversion (5,19). Nevertheless, lack of tactile feedback (7) and unexperienced assistant who stapling vessels are still the potential risk factors for massive bleeding in operation using surgical robot. It has been reported that intraoperative massive bleeding is still the main reason for converting to thoracotomy in robotic pulmonary resection (1,5,7,20).

Though several methods were recommended to treat intraoperative bleeding effectively (9-11), the best way to manage it is to prevent it from happening. Previous study proposed two types of guiding methods for the stapler to prevent major vascular injury during operation (17,18). Lin et al. introduced a Penrose drain tube to guide a stapler in VATS lobectomy (17). It was useful for surgeons to apply such guiding method to pass stapler smoothly. However, the guiding tube modified from Penrose drain tube shared the same diameter, which made it difficult to pass through a narrow tunnel under pulmonary tissue. Yang and colleagues proposed another type of guiding tip modified from a urethral Nélton catheter (18). In this approach, the Nélton tip was placed into the anvil of stapler, and the modified stapler can be self-guided to pass through the tunnel under the pulmonary vessel and soft tissue. This economical tip was effective in reducing the required time for the procedure, however, several deficiencies of this method should be considered. The tip placed in the stapler cannot assist the planning of the direction for the stapler before passing through the tunnel under pulmonary tissue, which may result in high tension between the stapler and pulmonary vessels caused by inappropriate direction of passing stapler. Consequently, massive bleeding would suddenly occur due to the ruptured vessel.

In this report, a total of 31 patients underwent RATS lobectomy with this guiding tube in one single medical team of our medical center. There was no conversion to thoracotomy caused by intraoperative vascular injury. However, this report has certain limitations. Only 31 patients were included in this study and so further validation through a larger prospective controlled trial with large sample size is recommended to confirm these findings.

In summary, this modified Foley catheter seems to be a promising guiding method in robotic pulmonary resection.

Ethical Statement: The authors are accountable for all aspects of the work in ensuring that questions related to the accuracy or integrity of any part of the work are appropriately investigated and resolved. The study was conducted in accordance with the Declaration of Helsinki (as revised in 2013). The study was approved by Ethics Committee of West China Hospital of Sichuan University (No. 2020-979) and informed consent was taken from all the patients.