Gastric cancer is considered as one of the most common malignant tumors with a high mortality, ranking the third among all cancer-related deaths in the world (1,2). Additionally, gastric cancer is a highly heterogeneous disease and its traditional histopathological classification is difficult to meet clinical needs. The Cancer Genome Atlas (TCGA) project divides gastric cancer into 4 subtypes: Epstein-Barr virus, microsatellite instability, and genomically stable and chromosomal instability (3). Therefore, it is particularly important to find out molecular markers related to the pathogenesis and prognosis of gastric cancer.

AT-rich interactive domain1A gene (ARID1A) is a crucial member of SWI/SNF chromatin-remodeling complexes (4). It has helicase and ATPase activities and plays a role in embryonic development, tissue growth, cell proliferation, differentiation and apoptosis, as well as regulations of DNA synthesis, gene transcription, and DNA damage repair (5,6). In recent years, studies have found that in addition to ovarian cancer and head and neck cancer, ARID1A mutations are also widely found in liver cancer, gastric cancer, lung cancer and kidney cancer, which have become a recent research hotspot (7-12). Among them, ARID1A mutation rate in gastric cancer tissues is 8–27%, and this gene mutation often leads to the loss or decrease of protein expression (13,14). Low expression of ARID1A gene is related with tumor progression, lymph node metastasis and vascular invasion (15,16), which is also one of the factors predicting poor prognosis of this tumor (17). Therefore, ARID1A gene mutation is likely to be a key factor in the gastric cancer development.

At present, the treatment of advanced gastric cancer is still based on chemotherapy. The first-line chemotherapy regimens recommended by the National Comprehensive Cancer Network guidelines for gastric cancer include oxaliplatin, platinum, taxanes, and fluorouracil. Oxaliplatin is a third-generation platinum antitumor drug with high efficiency and low toxicity (18,19). Therefore, the insensitivity or secondary drug resistance of oxaliplatin to gastric cancer is one of the vital causes of tumor progression. Lyu et al. have shown that ARID1A siRNA decreased the expression of ARID1A significantly, which led to cisplatin chemosensitivity and also cell apoptosis reduction in ES2 ovarian cancer cells via the regulation of AKT expression (20). For gastric cancer, there is no clinical or laboratory evidence to show whether the low expression of ARID1A affects the sensitivity of gastric cancer to oxaliplatin.

MGC-803 and AGS cells were obtained from the Key Laboratory of Digestive Tract Malignancies, Ministry of Education, Fujian Medical University (Fujian, China). All cells were grown in Dulbecco’s Modified Eagle’s Medium (DMEM; Hyclone, USA) supplemented with 10% fetal bovine serum (Zhejiang Tianhang Biotechnology Co., Ltd. China), 100 U/mL penicillin and 100 mg/mL streptomycin (Hyclone, USA) in a humidified atmosphere of 5% CO2 at 37 °C. The study was conducted in accordance with the Declaration of Helsinki (as revised in 2013). The present study does not need ethics approval because of no animals or people involved.

After transfection for 48 h, the gastric cancer cell line was screened with puromycin, and the transfection was observed under an inverted fluorescence microscope. Furthermore, the cells in the negative empty vector control group (NC) were treated with empty vector. Design and synthesis of ARID1A gene lentiviral shRNAs sequences were shown in Table 1.

According to the manufacturer’s protocol, total RNA was extracted from MGC-803 and AGS cells using Trizol Reagent (Invitrogen, CA), then the isolated RNA was reverse-transcribed into cDNA via PrimeScriptTM RT reagent Kit with gDNA Eraser (TaKaRa, Japan). Real-time PCR amplification of the gene of interest was listed in Table 2. The mRNA levels were calculated using the 2-∆∆Ct method. The RNA expression values were normalized using β-actin mRNA level.

The MGC-803 and AGS cells in logarithmic growth phase were digested with 0.25% trypsin to prepare a single cell suspension, which was inoculated into 96-well plates at a density of 3×103 cells/well at 37 °C with 5% CO2. Ten µL of CCK-8 solution was then added to each well. A microplate reader was used to measure the absorbance value (OD value) at 450 and 630 nm after 1 h incubation. The proliferation activity of the cells was represented by the A value, which was proportional to the number of living cells.

As described in the instructions of Annexin V-PE/7-AAD apoptosis detection kit (BD Biosciences, USA), the MGC803 and AGS cells were separately digested, centrifuged and collected, then washed three times with cold phosphate buffer (PBS) to adjust the cell density to 2×105/mL. Binding buffer (200 µL) was added to resuspend the cells. Then 5 µL of Annexin V-PE staining solution was added in EP tubes, being mixed gently; followed by incubation for 15 min at 2–8 °C in the dark. Ten µL of 7-AAD staining solution was added to stain DNA for 5 min at 2–8 °C in the dark. The apoptotic rate was measured by flow cytometry (BD Biosciences, USA) within 1 h.

The upper chamber of the transwell chamber (Corning, USA) was precoated with 50 µL of Matrigel (1:8 dilution) and removed to a 37 °C incubator for 2 h. While 600 µL of complete medium was added to the lower chamber, 200 µL cell suspension (1×105 cells/mL) was added to the upper chamber and incubated for 12 h. The membrane was washed with PBS. The cells were wiped in the chamber, and then fixed with 4% paraformaldehyde for 20 min. After removing the non-migrated cells with cotton swabs, the migrating cells were stained with crystal violet for 20 min. Fields were selected at random to count and photograph cells under a light microscope. Cells passed through the Matrigel were analyzed to estimate the invasion ability. Cell invasion assay was detected by a transwell chamber invasion model (Corning, USA).

SPSS software version 20.0 was used to perform statistical analyses and the experimental measurement data were present as mean ± SD. The comparison of mean between the two groups was conducted by independent sample t test. Comparisons between groups were analyzed using one-way analysis of variance (one-way ANOVA). Differences were considered as significant when P<0.05. 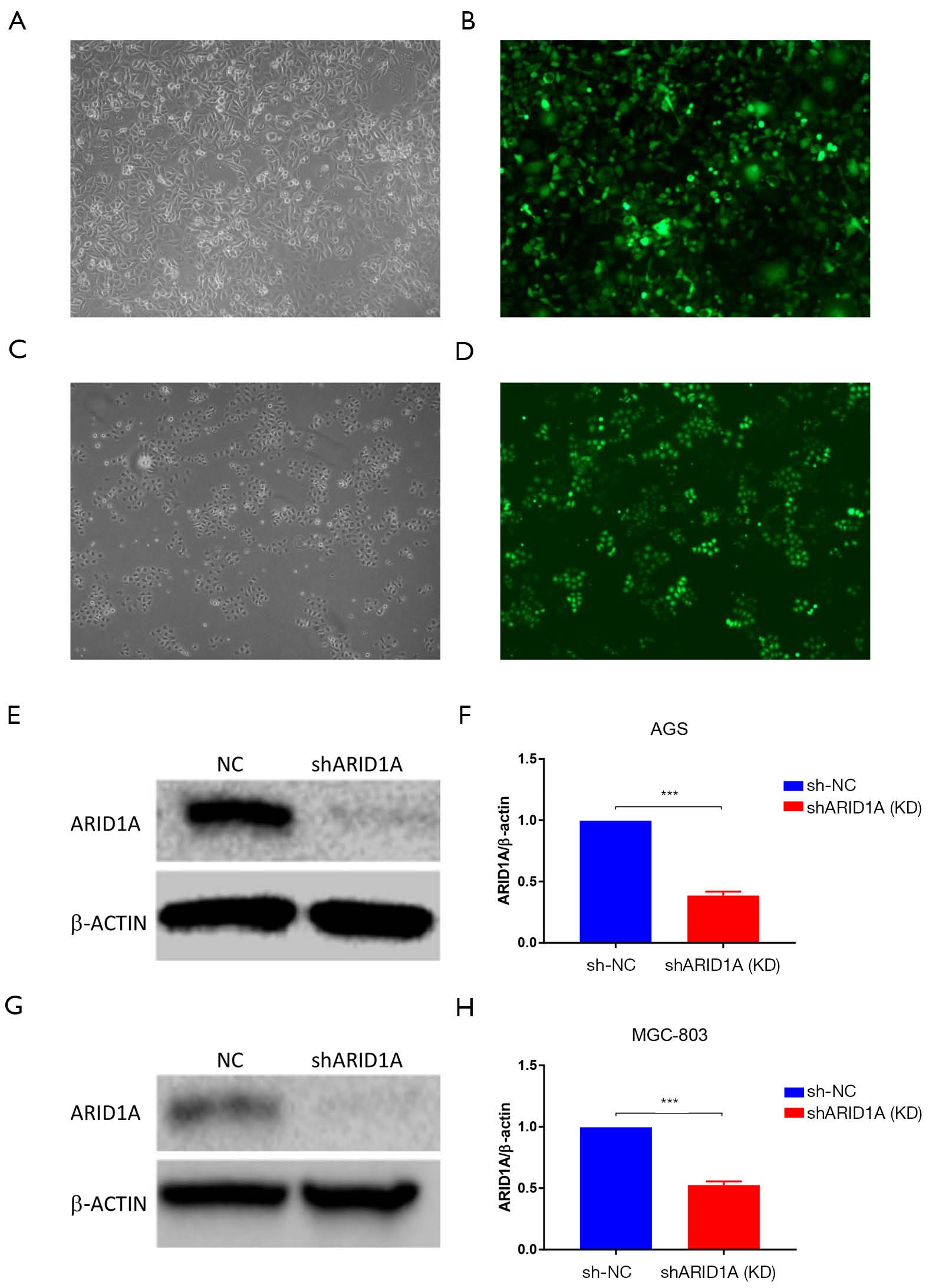 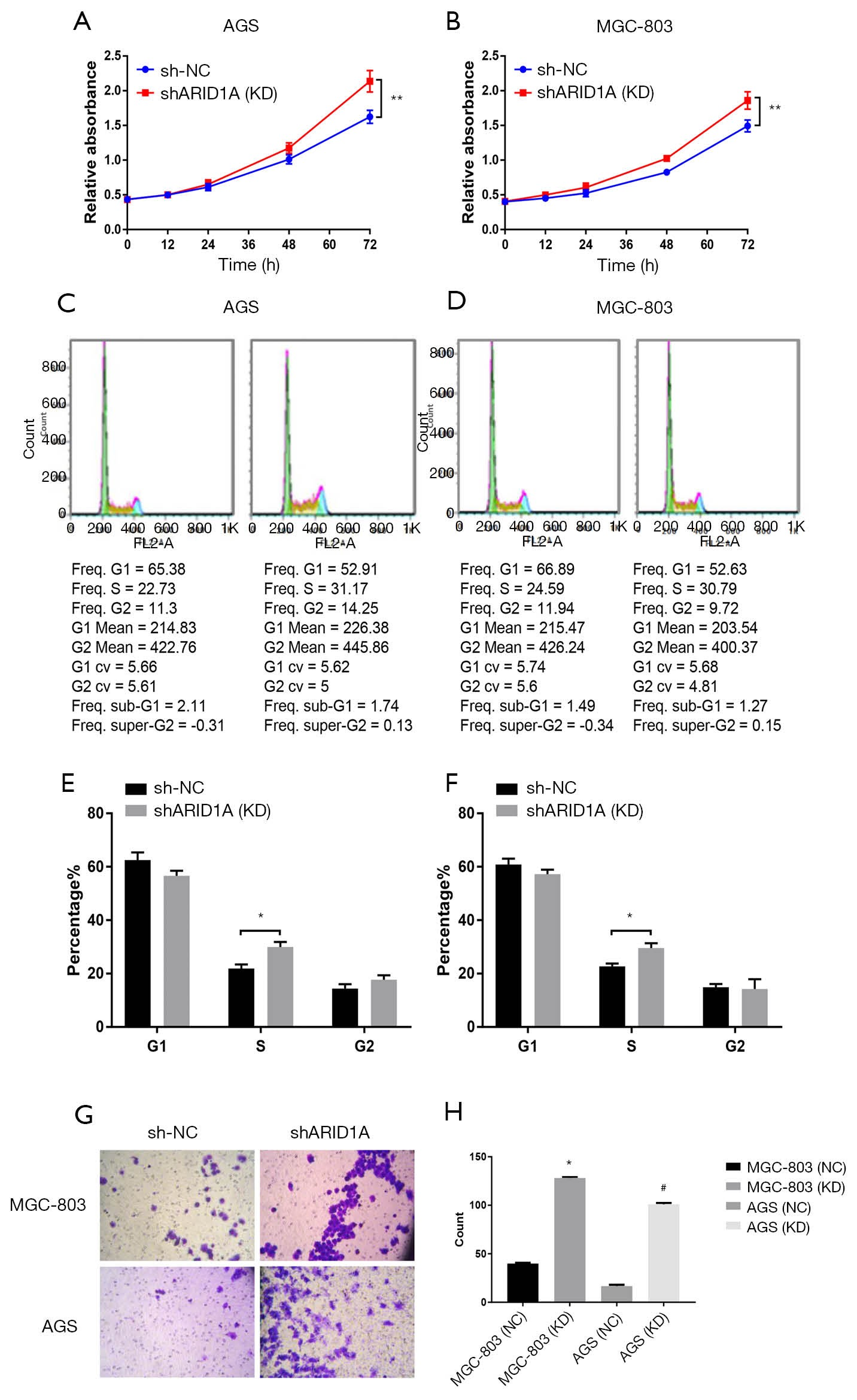 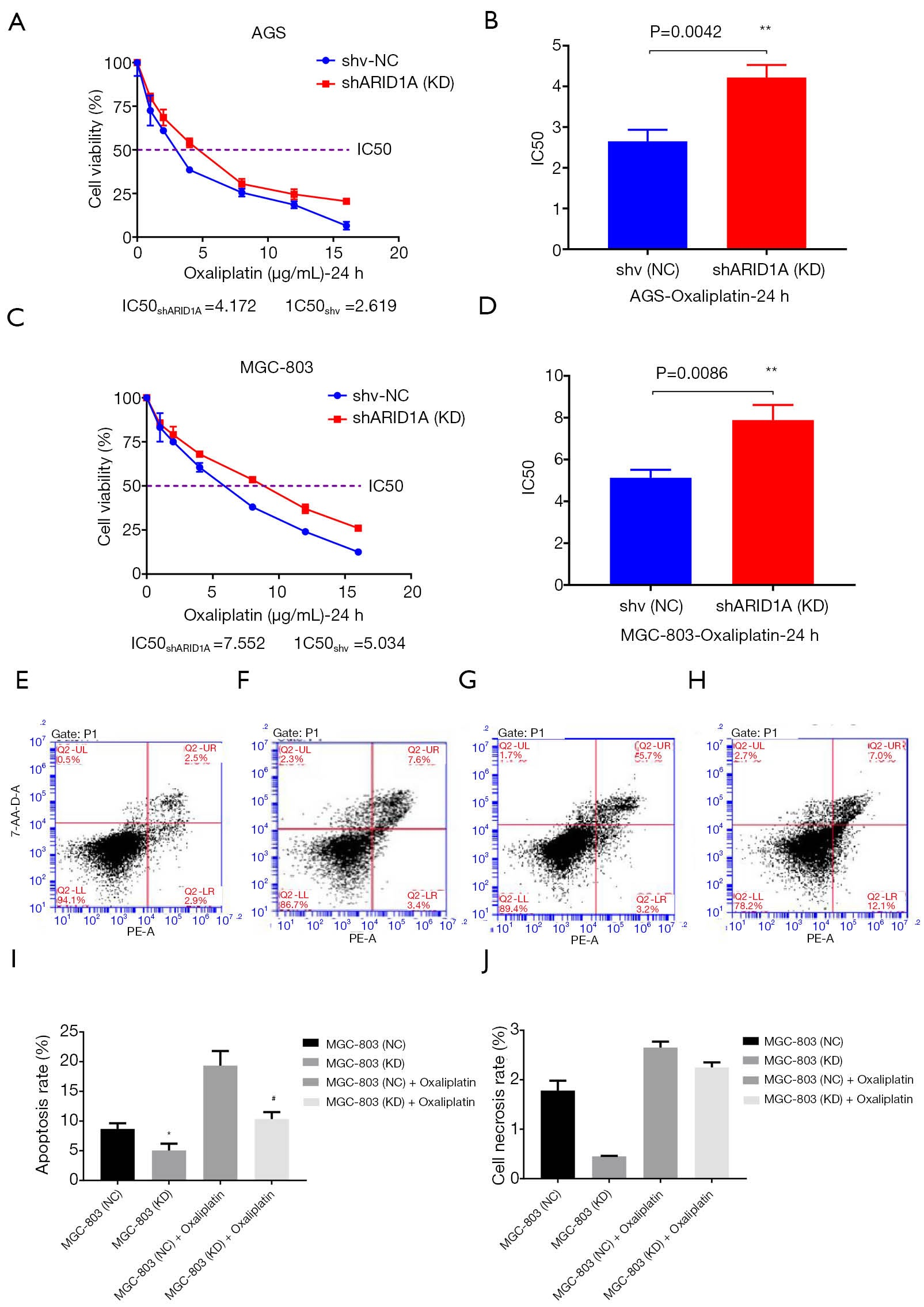 The AGS and MGC-803 cells are typical gastric cancer cells (27). Zhao et al. (28) have found that ARID1A inactivation causes defects in telomere cohesion, which selectively eliminated gross chromosome aberrations during mitosis. Colony formation capability of single cells in G2/M, but not G1 phase, was significantly reduced by ARID1A inactivation. Williamson et al. (29) also have point out that ARID1A defective cells have a delayed progression through the cell cycle and specifically delayed progression through S and G2/M, in ARID1A mutant tumour cells, inhibition of ATR triggers premature mitotic entry, genomic instability and apoptosis. The results of Williamson et al. were similar to our study, either MGC803 or AGS cell lines, ARID1A gene silencing led to the cell cycle delayed progression, and there were significant differences in S phase (P<0.05). In this study, we illustrated the biological effects of ARID1A gene silencing on gastric cancer cells and the effect on the sensitivity of gastric cancer cells to oxaliplatin. Besides, ARID1A gene silencing could also reduce the sensitivity of gastric cancer cells to oxaliplatin.

Oxaliplatin has a good effect on the treatment of colon cancer, lung cancer and gastric cancer, and is frequently used in clinical applications (18,30). However, many patients with gastric cancer are clinically insensitive or secondary to oxaliplatin, leading to tumor progression. The study results showed that ARID1A gene silencing promoted the proliferation and invasion of gastric cancer cells, and affected the biological behavior of gastric cancer cells. Lyu et al. (20) silenced the ARID1A gene by siRNA technology, and found that the sensitivity of ES2 ovarian cancer cell line to cisplatin was decreased, indicating that the resistance to cisplatin in ovarian cancer might be related to the low expression of ARID1A, which was consistent with our results.

Yet, the drug resistance mechanism of gastric cancer cells induced by ARID1A gene silencing is still unclear. We speculate that the mechanism was related to Akt signaling pathway. Akt, or protein kinase B, plays an important part in cell proliferation and apoptosis (31). Studies have shown that loss of nuclear ARID1A expression is associated with increased AKT phosphorylation in clear ovarian cell carcinoma tumors (32). In addition, the deletion of ARID1A promotes the proliferation of cancer cells by activating the AKT signaling pathway in GC cell lines (33). ARID1A gene silencing controls cell proliferation and apoptosis by promoting the phosphorylation of Akt, thereby reducing the sensitivity of cells to oxaliplatin. Next, we will run Western blotting for p-AKT in both the cell lines to find out whether increased p-AKT might be the mechanism for increased proliferation and/or cell motility after depletion of ARID1A. And the way in which ARID1A gene silencing affects the phosphorylation level of Akt requires further research.

In summary, this study confirms that ARID1A is a potential tumor suppressor gene, and we verified for the first time that ARID1A gene silencing can reduce the sensitivity of gastric cancer cells to oxaliplatin, providing a theoretical basis for predicting the efficacy of oxaliplatin-based chemotherapy in patients with gastric cancer and formulating individualized treatment plans.

Funding: This work was supported by the Health and Family Planning Youth Project of Fujian Province (grant number 2018-1-42).

Conflicts of Interest: All authors have completed the ICMJE uniform disclosure form (available at http://dx.doi.org/10.21037/tcr-20-2384). The authors have no conflicts of interest to declare.

Ethical Statement: The authors are accountable for all aspects of the work in ensuring that questions related to the accuracy or integrity of any part of the work are appropriately investigated and resolved. The study was conducted in accordance with the Declaration of Helsinki (as revised in 2013). The present study does not need ethics approval because of no animals or people involved.