Functions of polyphenols and its anticancer properties in biomedical research: a narrative review

Cancer is described as a series of complex processes involving impaired cell death, unregulated cell proliferation, and changes in cell physiology, which often leads to malignant tumor formation resulting in metastasis being invaded by distant tissues (1). The incidence of cancer and mortality is rising rapidly around the world. According to GLOBOCON, an estimation of 18.1 million new cancer cases and 9.6 million cancer-related deaths cancer has been reported in 2018 (2). The causes are complex but focus on both population growth and aging as well as shifts in the prevalence and distribution of major cancer risk factors, including socio-economic development (3). Multi-stage carcinogenesis is a commonly accepted concept of cancer development and is divided functionally into three stages: initiation, promotion, and progression (4,5). Current therapies such as chemotherapy and radiotherapy have drawbacks, including drug resistance in cancers to anticancer medications and adverse radiotherapy outcomes (6,7).

Over the past centuries, pharmacological systems all over cultures have professed and supported the use of edible substances, particularly plant-derived ones, to treat and prevent diseases, thereby creating knowledge of the potential of natural agents known as phytochemicals as anticarcinogenic agents for cancer (8,9). Almost 47% of the anticancer drugs available on the market today are derivatives of natural products (10). Phenolic compounds, such as flavonoids, are the most effective secondary plant-derived metabolites for cancer treatment (11,12).

Natural polyphenols are organic chemicals derived from plants, distinguished structurally having two or more phenol units (13). Numerous studies have been carried out on polyphenols to examine their possible health benefits, involving defense against oxidative stress, diabetes, cardiovascular disease, neurodegenerative disease, and aging (14). These polyphenols can exert anticancer effects through a broad range of mechanisms, that includes cancer cell removal by modification of signaling pathways, inhibition of cell cycle events, and apoptosis induction. Polyphenols also regulate the activities of enzymes involved in tumor cell proliferation. Recent studies are implicating natural polyphenols and their anti-cancer potential through a wide range of properties, e.g., antiangiogenic, antimetastasis, DNA-interaction, and others (15,16).

In this review, we summarize selected examples from the recent literature to show the potential of naturally derived polyphenols as anticancer agents.

Polyphenols are listed according to the number of phenol rings and the structural elements that bind them together. The classified groups include phenolic acids, stilbenes, lignans, and flavonoids. Flavonoids have antioxidant and anti-inflammatory properties, which are found in legumes, fruits, vegetables, green tea, and red wine. They are subdivided into six classes: anthocyanins, flavonols, flavones, flavanones, isoflavones, and flavanols (13,17). Flavonols are the most ubiquitous flavonoids that are abundant in fruits and leafy vegetables (14). The key members are quercetin and kaempferol, and the most abundant sources include onions, curly kale, leeks, and broccoli (17). Flavones consists chiefly of glycosides of luteolin and apigenin (16). Flavanones are found in citrus, tomatoes, and other aromatic plants like mint. Isoflavones are flavonoids possessing structural similarities with estrogens and are mostly found in leguminous plants. The primary source of isoflavones in the human diet is soya and its processed products. Among phenolic acids, hydroxybenzoic acids are found in tea, cinnamon, coffee, kiwis, blueberries, apples, plums, and cherries (14). Stilbenes are found in meager quantities in the human diet. Resveratrol is one of the well-studied polyphenols for anticarcinogenic effects in medicinal plants (18). Lignans are found in flax seeds, grains, legumes, cereals, algae, fruits, and certain vegetables (19). Anthocyanins occur in all tissues of plants, including stems, leaves, flowers, roots, and fruits. Flavanols are found in different types of fruits, chocolate, and green tea (17). The overall classification of polyphenols is illustrated in Table 1. 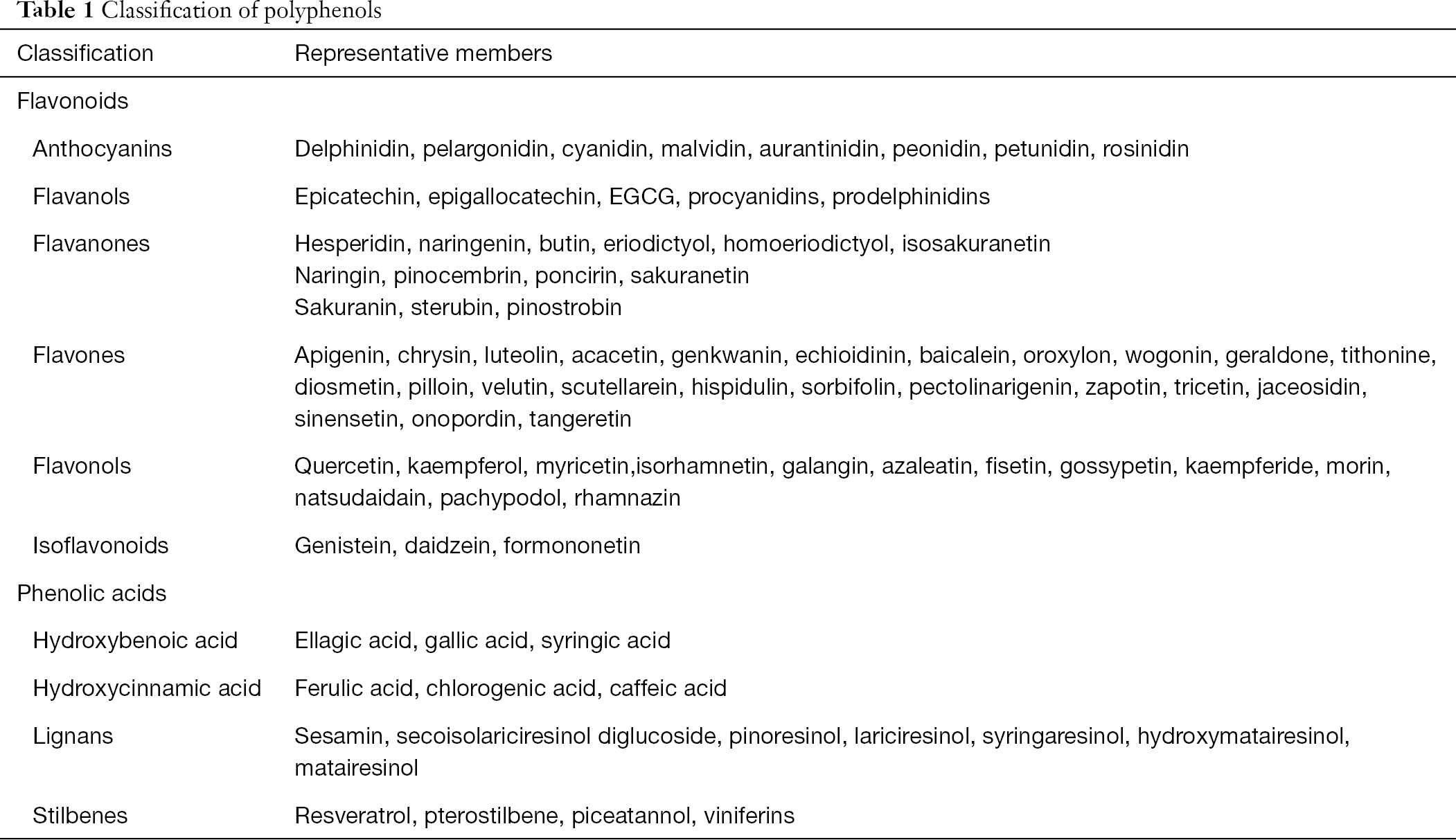 Polyphenols as an anticancer agent

The relationship between polyphenol consumption and cancer risk occurrence is regularly assessed and meta-analyzed over the last 10–15 years. In a meta-analysis of prospective studies, isoflavone intake was associated with a 19% reduction in the risk of gastric cancer (20). Recent epidemiologic studies have indicated a decrease in breast cancer risk by soy product consumption (21). The consumption of isoflavone and flavonol was correlated with an estimated 30% reduction in the incidence of ovarian and endometrial cancers across cohort and case-control studies (22). Intake of soy isoflavones and soy-based foods associated with reduced risk of colorectal cancer in two Asian population meta-analyses, one showing a 23% reduction in risk from 13 case-control studies and four prospective studies. Also, a high intake of total soy products was linked to a reduced risk of colorectal cancer in a case-control Korean survey, particularly at the distal and rectal sites (22). A meta-analysis of green tea polyphenols showed a 19% reduction in the risk of prostate cancer only when seven or more cups of green tea were ingested daily (23). A case-control study in Canada reported beneficial effects of a high dietary intake of total flavonoids on lung cancer risks (24,25). Overall, polyphenols compounds are attractive molecules for cancer treatment, and some of the most studied polyphenols are described briefly in the following sections. We present the following article in accordance with the Narrative Review reporting checklist (available at http://dx.doi.org/10.21037/tcr-20-2359).

The literature review was done using the electronic database PubMed and Google scholar up to June 2020, with the following keywords: polyphenol, polyphenol anticancer, quercetin anticancer, resveratrol anticancer, curcumin anticancer, and kaempferol anticancer. The search did not include editorials, letters, comments, and conference letters. Paper search was limited to the English language. All data were extracted in a standard pre-determined format, including information on first author’s name, publication year, polyphenols, and its anticancer effects on different cell lines. The articles included in the study were full-length original articles and focused on various cancer cell lines. Chemical structures of the polyphenols are provided using the ChemDraw program. 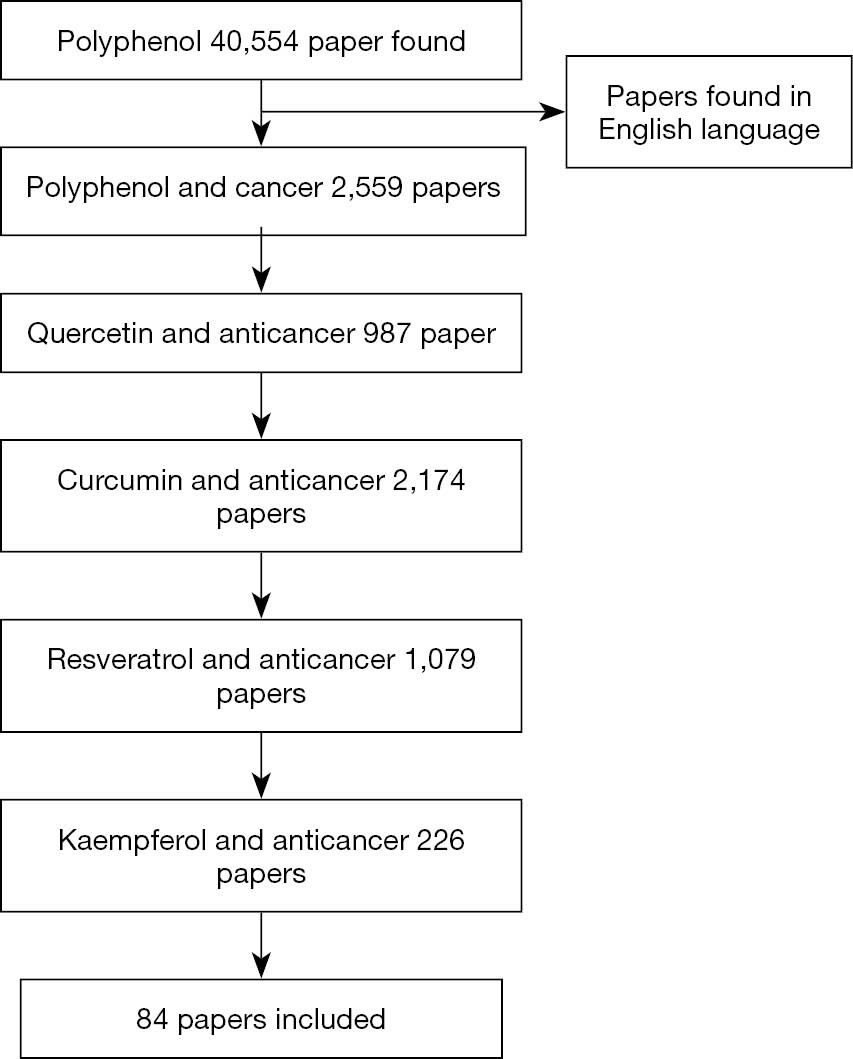 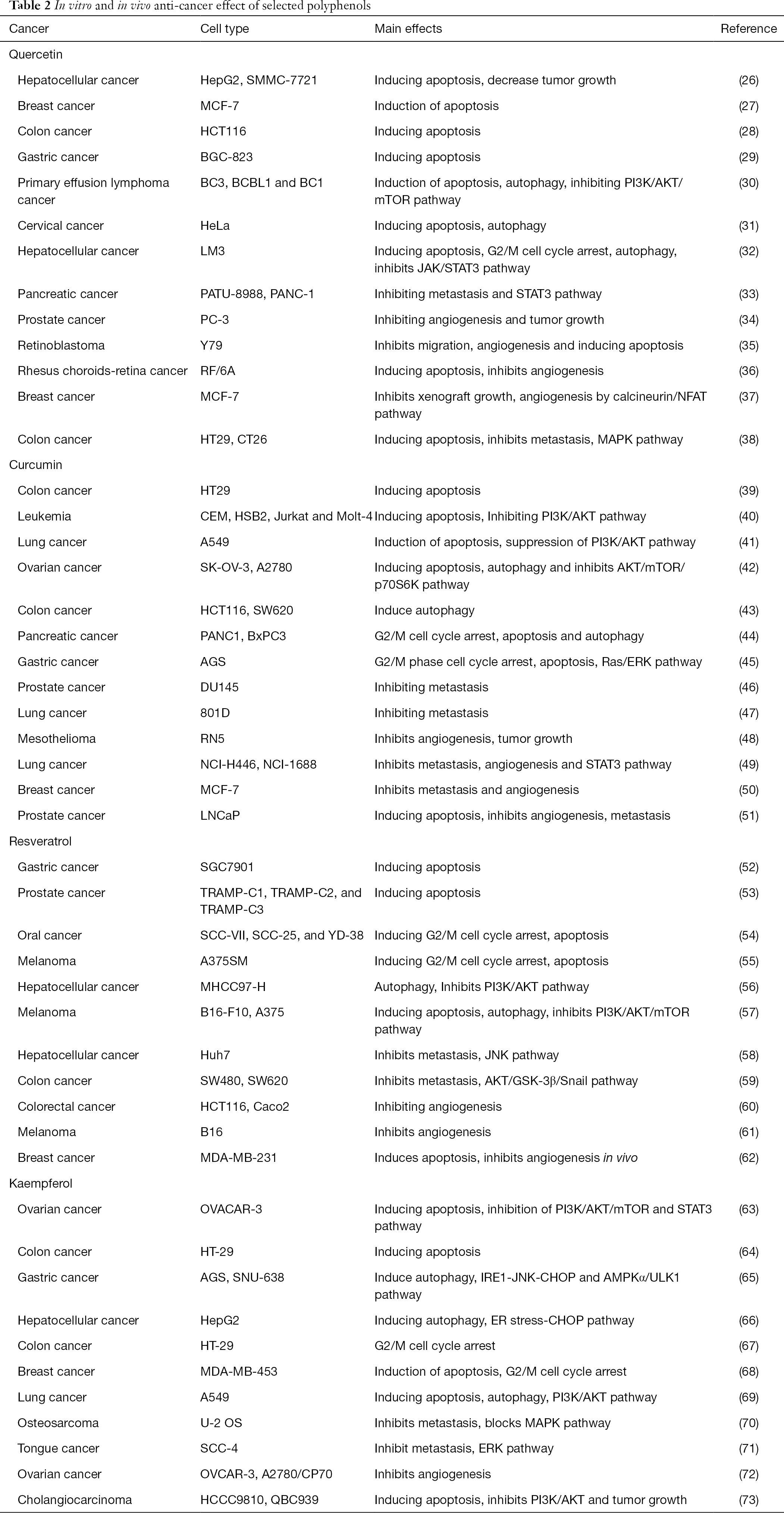 The flavonol quercetin (3,3',4',5,7-pentahydroxyflavone; Figure 2) is one of the most copious naturally occurring polyphenols. Quercetin is found in several plant parts (leaves, grains, and fruits) as well as in foods and beverages, including tea and red wine (26,27). Quercetin is identified to have a wide range of biological activities, including antioxidant, antimicrobial, anticarcinogenic, antidiabetic activities, and anti-inflammatory. Quercetin functions as an antioxidant at low concentrations and induces chemopreventive action. However, high levels of quercetin act as a pro-oxidant and may cause a chemotherapeutic effect (28,29). The recommended regular doses of quercetin in dietary supplements are typically in the range of up to 1,000 mg (30).

Curcumin [1,7-bis(4-hydroxy-3-methoxyphenyl)-1,6-heptadiene-3,5-dione] is a hydrophobic polyphenol (Figure 3), bright-yellow, present in the rhizome of Curcuma longa, a perennial herb in the family Zingiberaceae (40). Curcumin belongs to a chemical class of polyphenols has been shown to have therapeutic benefits in several chronic diseases including arthritis, neurodegenerative diseases, metabolic syndrome, liver disease, obesity, inflammation, and in several cancer types (41). Curcumin shown to have significant anti-inflammatory, antioxidant, anticoagulant, antimutagenic, anticarcinogenic, and anti-infective effects. Curcumin has also demonstrated significant healing properties for wounds (42,43). Since then, the scientific interest in the use of curcumin for health benefits has increased. 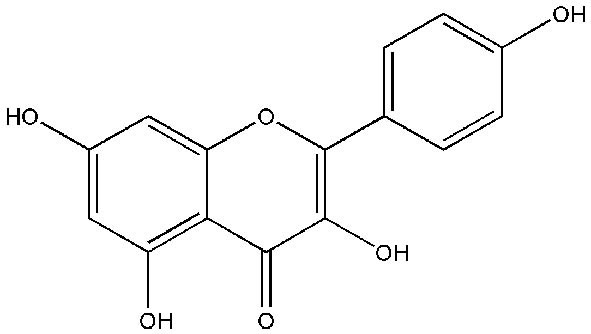 Limitations of polyphenols as anticancer agent

Polyphenolic compounds, which are abundant in dietary sources, show great promise in treating cancer, especially in consideration of their safe consumption. However, one of the major concern with using polyphenols as anticancer agents individually is their poor bioavailability in the human body. In addition, their interactions with other natural compounds in a diet may hinder or complicate consistency of their efficacy. Therefore, specifically designed combinations of several polyphenols or combinations of polyphenols with other natural agents aimed at defined biological targets will expand metabolic effects of the constituents of such mixtures in controlled and reproducible ways (14).

The desire for new successful drugs capable of battling cancer is still a challenge in medical science. Natural organisms (e.g., plants, bacteria, fungi) provide active molecules with a potential application in medicine for the management of several diseases, including cancer. The health effects of polyphenols depend upon both their respective intakes and bioavailability. The current review of some targeted polyphenol compounds (quercetin, curcumin, resveratrol, and kaempferol) and anticancer effects in various cancer cell lines is provided. The mode of action included mainly modulation of molecular events and signaling pathways linked to cell survival, proliferation, metastasis, apoptosis, and angiogenesis. Therefore, future research directions should extend the reach of natural compounds as healthy, safe, effective, and cost-effective therapeutic solutions to cancer. The in vitro and in vivo anticancer effects of reported polyphenol compounds are illustrated in Table 2.

Conflicts of Interest: All authors have completed the ICMJE uniform disclosure form (available at http://dx.doi.org/10.21037/tcr-20-2359). The authors have no conflicts of interest to declare.