Rates of uterine cancers have increased by 21% during the past decade with increased mortality, similar to the rates in the early 1980s. This increase may be attributed to longer life expectancy, increased rates of obesity, and shifts in female reproductive patterns (13,14). Recently, increased incidence has been reported in low-middle income countries, such as Brazil and South Africa (14).

Currently, there are no well-established screening programs for endometrial cancer, and full hysterectomy is the most widely used and effective treatment for early-stage tumors (15). The risk assessment for endometrial carcinoma is inaccurate and relies on less reproducible histological examinations (16,17). Most patients receive a diagnosis in the early stages (I/II) owing to abnormal vaginal bleeding, observed in 94% of the cases (18). The patients show improved prognosis after surgery alone, with 5- and 10-year survival rates of 95% and 77%, respectively. However, diagnosis in late stages (IV) results in a drastic reduction of survival, with the 5-year survival rate being only 14% (19,20).

Several risk factors such as obesity, physical inactivity, excess exogenous estrogen, and insulin resistance are associated with increased risk of endometrial cancer (21). Women with a family history of endometrial cancer have approximately a 2-fold increase in the risk of developing the disease, with heritability between 27% and 52% (9,22,23). A prospective study of 203,691 twins (monozygotic and same-sex dizygotic) from Nordic countries revealed a cumulative cancer incidence of 32%. In a median 32 years of follow-up, the authors observed a significant overall familial risk for cancer and specific types of cancer, including uterine cancers (27%; 95% CI, 11–43%) (23).

Despite the involvement of genetic factors in the risk of endometrial cancer, they are not incorporated in the standard clinical procedures for prognosis assessment. Currently, variables adopted for risk stratification comprise stage, lymph node involvement, depth of myometrial invasion, histology, and grade (27).

The identification of biomarkers and their relationship with the risk factors are necessary for the improvement in risk stratification and early detection of endometrial cancers in view of the rise in disease incidence and mortality. We conducted a comprehensive systematic review of the literature to provide an overview of the associations between genetic factors and risk of endometrial cancer. We present the following article in accordance with the PRISMA reporting checklist (available at http://dx.doi.org/10.21037/tcr-20-2334).

Studies were selected by three independent investigators in a prepiloted form, with disagreements resolved by a fourth member. The criteria for full-text evaluation were if they were primary studies reporting genes involved in the pathophysiology of the endometrial cancer disregarding the study design or technique used for detection. Study outcome was the detection of alterations in genes related to endometrial cancer reported.

Data extracted from each study were gene, chromosome location, year of publication, first author, type of study, country of the study and doi number.

A total of 483 articles were evaluated and 186 (the complete list of references of the summary of evidence is available in Supplementary file 1) were retrieved in the selection process, comprising 329 genes that were studied in all human chromosomes and in mitochondrial DNA by several molecular methodologies (Table 1). The PRISMA flow of included studies is presented in Figure 1. The complete summary of findings is available in the online table (Table S1). 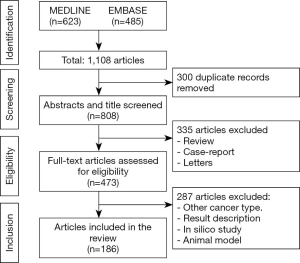 It has become well known in the past two decades that endometrial cancers present the highest molecular complexity among common tumor types, and its mechanistic heterogeneity is conformable with histologic and clinical variability (29).

The most frequently altered genes of endometrial cancer subgroups

Endometrioid carcinomas were present in all four subgroups. Endometrioid carcinoma is generally characterized by frequent derangements of the PI3K-PTEN-AKT-mTOR, RAS-MEK-ERK, and canonical WNT-β-catenin pathways. Endometrial cancer presents more mutations than any other tumor type studied thus far in the PI3K/AKT pathway by TCGA. The PI3K-PTEN-AKT-mTOR signal transduction pathway regulates cell growth and survival, synthesis of specific proteins, and metabolism. The RAS-RAF-MEK-ERK pathway plays a central role in regulation of cell proliferation, cell survival, and differentiation, is activated by KRAS mutations in endometrioid carcinoma, and can co-occur with alterations in PTEN, PIK3CA, and/or PIK3R1. The canonical WNT-β-catenin pathway regulates several cellular processes, which are constitutively activated in endometrioid carcinomas through gain-of-function mutations in CTNNB1 (β-catenin) (12). In addition, DNA mismatch repair (MMR) deficiency, a characteristic of 30% endometrioid cancers, is a major pathway enabling genomic instability in human cancers. Non-functional MMR leads to accumulation of insertion/deletion mutations at repetitive DNA stretches, such as microsatellites, and are, therefore, present with the MSI phenotype (32,33). The consequence of epigenetic silencing caused by promoter hypermethylation of MLH1 leads to MSI in sporadic endometrioid carcinomas. This results in the accumulation of somatic mutations at nucleotide repeats throughout the genome by defective MMR. Recently, ATR, CTCF, JAK1, RNF43, and RPL22 were indicated as drivers of the sustained pathogenic frameshift mutations at mononucleotide repeats in MSI-positive endometrioid carcinomas. Other known mechanisms of genomic instability in endometrioid carcinomas are somatic mutations of the exonuclease domain of POLE (12).

All types of serous carcinomas, except for a single tumor, belong to the high copy number subgroup in the TCGA classification. Mutations and/or dysregulation of TP53 or p53 are the most frequent molecular aberrations. Somatic mutations in PPP2R1A, FBXW7, SPOP, CHD4, and TAF1 are also involved in the serous carcinoma pathogenesis. In addition, overexpression or amplification of CCNE1, ERBB2, MYC, synuclein-γ, and p16 is observed (12,34,35).

Providing strategies for translation of genomic profile to clinical practice is garnering interest, especially the use of methods often available in the pathology toolbox (11,38,39). Stello et al. (40) aimed to confirm the prognostic potential of the TCGA subgroups from two large randomized trial populations comprising 834 early-stage endometrioid endometrial carcinomas (PORTEC-1 and -2) with long-term follow-up. They confirmed the effect of the four molecular subgroups on prognosis initially proposed by the TCGA. The substitution of markers for molecular analysis methods applicable clinically was used and proved feasible in >96% of patients with endometrioid endometrial carcinoma. Integration of well-established clinicopathological factors with prognostic molecular alterations resulted in a robust risk assessment. Approximately 15% patients with a markedly unfavorable prognosis and 50% patients with a favorable prognosis could be identified. Another way for clinical translation may be the development of polygenic risk scores for endometrial cancer. Therefore, a major research priority is the expansion of endometrial cancer genomic profile to non-European populations enabling comparable polygenic risk scores of many ethnic groups (9).

In addition to the genetic factors, the available data showed that the endocannabinoid system plays an important role in the development and progression of gynecological malignancies. The activation of cannabinoid receptor type 1 (CB1R), a G-protein coupled receptor present in the central nervous system and peripheral tissues such as the ovaries and uterus, can regulate cell proliferation, differentiation, and death. Moreover, cannabinoid receptor activation can inhibit cancer cell invasion through indirect downregulation of metalloproteinase (MMP2) expression and activity. Endocannabinoids also play a role in the inhibition of neoangiogenesis by decreasing the production of proangiogenic factors and/or by directly modulating endothelial cells, decreasing the expression of vascular endothelial growth factor (VEGF) and VEGF receptor (VEGF-R). The cannabinoid receptor type 2 (CB2R) is expressed the most in endometrial cancer biopsies and has a potential role in the control of cancer cell growth through the regulation of mitochondrial function and cell apoptosis (42,43).

Despite the availability of guidelines for assessment, genetic testing, and genetic counseling of patients diagnosed with endometrial cancer, these services are not offered equitably or consistently (44-47). Genetic counseling is a process to support individuals and families affected by or are at risk of genetic or hereditary diseases. Trained healthcare personnel provide counseling, and the assessment is based on a combination of the personal medical and family history. The aim of the counseling is to help individuals understand and adapt to the clinical, psychosocial, economical, and ethical issues raised during the diagnostic process, with a focus on disease information, inheritance, genetic testing, management options, career, and family plan, as well as management of affected or at-risk relatives (47-50).

Hinchcliff et al. (44) summarized the literature on genetic counseling and genetic testing of patients affected by gynecologic cancers and observed that a small proportion of studies provided assessment on guideline compliance or tumor screening completion rate [immunohistochemistry (IHC) and/or MSI], genetic counseling, or genetic testing among patients diagnosed with endometrial cancer in the United States. In addition, the authors draw attention to the variability of tumor screening among hospitals and also among healthcare providers ordering the testing, interpretation of findings, and patient triage to genetics services.

Although endometrial cancer is mostly diagnosed in women over the age of 60 years, approximately 5% of all women diagnosed are of reproductive age (51), and the impairment of reproductive function, especially ovarian insufficiency, is one of the long-term consequences of cancer therapy. The American Society of Clinical Oncology (ASCO) and the American Society for Reproductive Medicine (ASRM) strongly recommend clinicians to inform patients about the potential loss of fertility and possibility of fertility preservation before chemotherapy and radiotherapy (52). Moreover, quality of life represents a relevant concern in patient care; together with potential secondary infertility, the side effects of cancer diagnosis and treatment can affect the physical, mental, and social wellbeing of patients leading to depression and anxiety (53).

Because of the diversity and complexity of the genetic counseling process, in-depth approaches on patient counseling by a team should be considered. An ideal counseling team should consist of clinicians including oncologist, surgeon, obstetrician gynecologist, psychologist and/or psychiatrist, medical geneticist, molecular diagnostic specialist, genetics nurses, and ancillary staff (42-44).

In summary, a combination of genomic characterization along with pathological diagnosis, genetic counseling and psychological support are pivotal in improving the prognostic assessment and clinical management of patients with endometrial cancer.

Provenance and Peer Review: This article was commissioned by the editorial office, Translational Cancer Research for the series “Endometrial Cancer”. The article has undergone external peer review.

Reporting Checklist: The authors have completed the PRISMA reporting checklist. Available at http://dx.doi.org/10.21037/tcr-20-2334

Conflicts of Interest: All authors have completed the ICMJE uniform disclosure form (available at http://dx.doi.org/10.21037/tcr-20-2334). The series “Endometrial Cancer” was commissioned by the editorial office without any funding or sponsorship. Dr. ASL served as the unpaid Guest Editor of the series, and serves as an unpaid editorial board member of Translational Cancer Research from Dec 2019 to Nov 2021. The authors have no other conflicts of interest to declare.