Decrease in radiation therapy rates in patients with stage I seminoma: a population-based study

Testicular germ cell tumors comprise only 1–2% of all cancers in the general population, but account for approximately 98% of all testicular malignancies (1). Seminomas are more common than non-seminomas among men (2). The majority of seminomas, which means “tumor confined to the testis”, are pathological stage T1 (3). Paraaortic (PA) and pelvic lymph nodes are at the greatest risk of metastases after radical orchidectomy. Adjuvant radiotherapy to these sites decreases the risk of metastasis, and therefore, became the standard adjuvant treatment for stage I seminoma for decades. Almost 100% of the cancer-specific survival (CSS) of patients with CS1 testicular seminoma has been achieved with a multidisciplinary management (4,5).

Postoperative radiotherapy has been considered the standard adjuvant treatment for localized testicular seminoma in the last century. However, given that seminoma is a highly curable disease, efforts have been made to minimize radiotherapy-induced damage by reducing the target field size and decreasing the prescription dose. In 1999, Fossa recommended that adjuvant radiotherapy be confined to the PA lymph nodes in order to replace PA and ipsilateral iliac lymph node irradiation [dogleg (DL) field] and indicated that this would lead to the same rate of recurrence rate, but lower toxicity (6). In 2005, Jones et al. suggested a dose reduction from 30 to 20 Gy in 10 fractions in order to help patients avoid delays in returning to work without more failure in relapse rates (7). Further, two other studies revealed that carboplatin chemotherapy and active surveillance can provide disease control equivalent to that of radiotherapy, and thus, could be used as alternative treatment strategies. Oliver et al. reported a non-inferiority of carboplatin to radiotherapy in the context of relapse-free survival rates for stage I seminoma (8). Meanwhile, based on the fact that salvage radiotherapy and chemotherapy have a low relapse-free rate in stage I testicular seminoma, Choo et al. showed that active surveillance is a safe alternative to these treatments (9). Despite the evidence that radiotherapy, carboplatin, and surveillance can lead to excellent outcomes in stage I seminoma, expert opinions and guidelines still differ (10-13).

Reported data from previous studies have the ability to drive small changes in the postoperative treatment strategy used by practitioners; however, the extent to which real-world clinical practices endorse such treatment strategies is not fully understood. Thus, this study aimed to analyze the 40-year trend in external radiotherapy for patients with testicular seminoma in the United States (US) using the Surveillance, Epidemiology and End Results (SEER) database. We present the following article in accordance with the STROBE reporting checklist (available at http://dx.doi.org/10.21037/tcr-20-2545).

With permission from the National Cancer Institute, we used data from the SEER database, which collects information from population-based cancer registries covering approximately 34.6% of the US population. The data contain patient demographics, primary tumor site, stage at diagnosis, treatment, and follow-up. The study protocol was deemed to be exempt from institutional review board of our hospital due to its retrospective nature and the need for informed consent was waived. The study was conducted in accordance with the Declaration of Helsinki (as revised in 2013).

We identified 21,994 patients from the incidence database of SEER 18 Regs Custom Data (with additional treatment fields), which was submitted in November 2018 (1975–2016 varying) using the National Cancer Institute SEER*Stat software (Surveillance Research Program, version 8.3.6). The inclusion criteria were: (I) site recode of ICD-O-3/WHO 2008 is testis, (II) ICD-O-3 Hist/behav, malignant is 9061/3: seminoma, NOS, and (III) stage is localized. Exclusion criteria were (I) not malignant behavior, (II) unknown age, and (III) cases not in the research database. Stage was defined by summary/historic SEER historic stage A [1973–2015], which is derived from the Collaborative Stage (CS) 2004–2015 and Extent of Disease (EOD) 1973–2003. It is a simplified version of stage: in situ, localized, regional, distant, and unknown. Localized stage was described as an invasive neoplasm confined entirely to the organ of origin. For all the different EOD schemes that have been used over time, the SEER Program strives to make all stage variables consistent.

Information on the year of diagnosis, patient age at diagnosis, marital status, race, laterality, and region were obtained from the database. Treatment of surgery was adapted from the variable of “Reason no cancer directed surgery”. Data on radiation and chemotherapy treatment were also included in the database. The treatment of surveillance was calculated from the usage of radiotherapy and chemotherapy; if neither was performed, surveillance was considered. Overall survival (OS) and cause-specific death were analyzed in months.

Percentages of patients receiving radiation between groups were compared using chi-square test. The 5- and 10-year cause specific survival rates and OS rates were estimated by Kaplan-Meier analyses, and compared by Log-Rank test. Statistical tests were 2-tailed, and the probability of a type I error was set at P<0.05. All analyses were performed using IBM SPSS Statistics (version R24.0.0.0, IBM Corp., Armonk, NY, USA). Survival curves in Figure 1 was exported from SPSS statistics and the graphs were created in GraphPad Prism (version 8.0.0, GraphPad Software, Inc.). 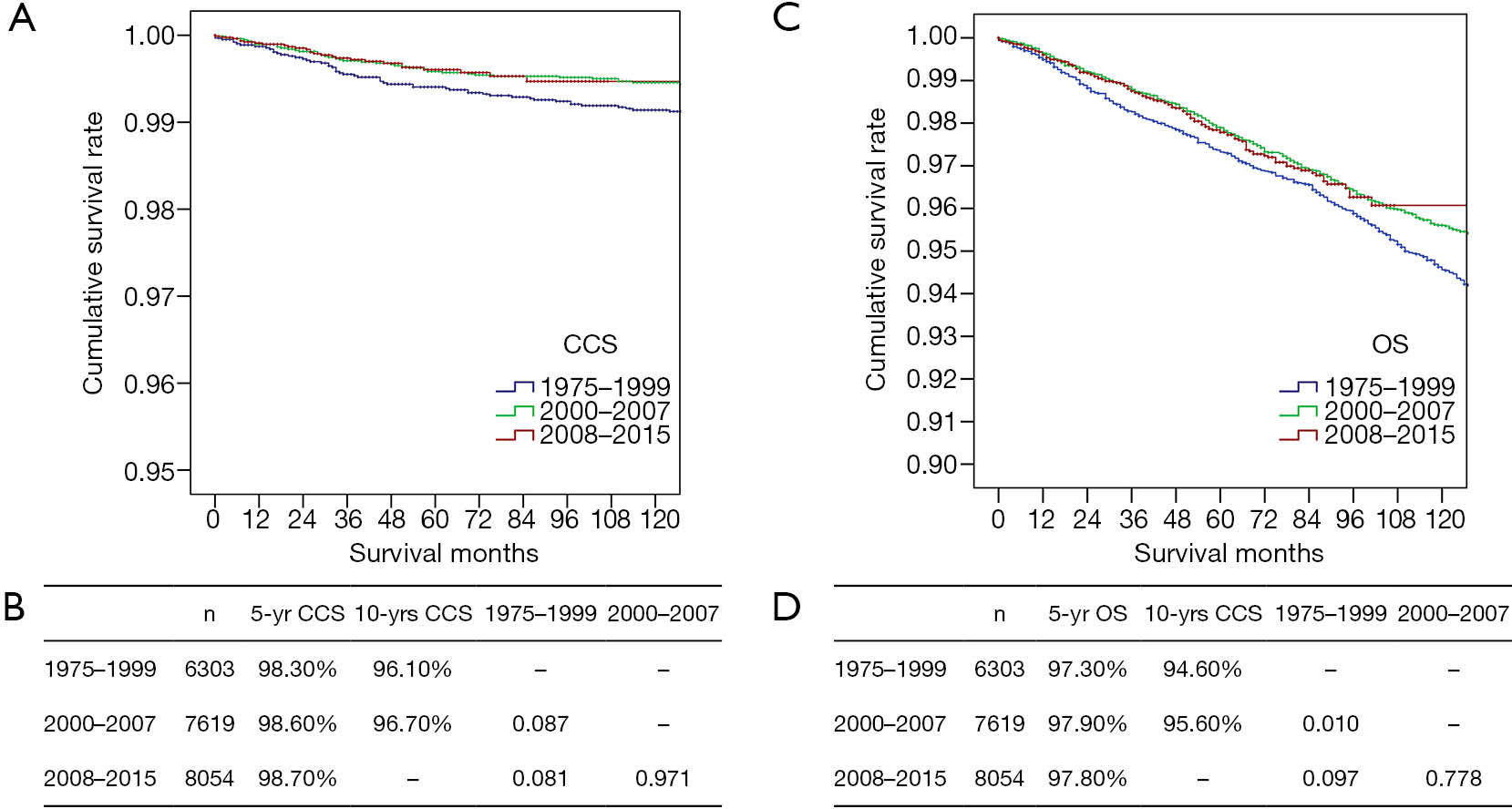 Figure 2 Trends in treatments for stage I seminoma between 1975 and 2015. Lines indicate trends in the proportion of patients receiving surgery (gray), radiotherapy (red), chemotherapy (blue) and surveillance (brown). Although the proportion of patients receiving surgery remains steady, radiotherapy shows a downward trend and chemotherapy and surveillance show a predominantly upward trend. 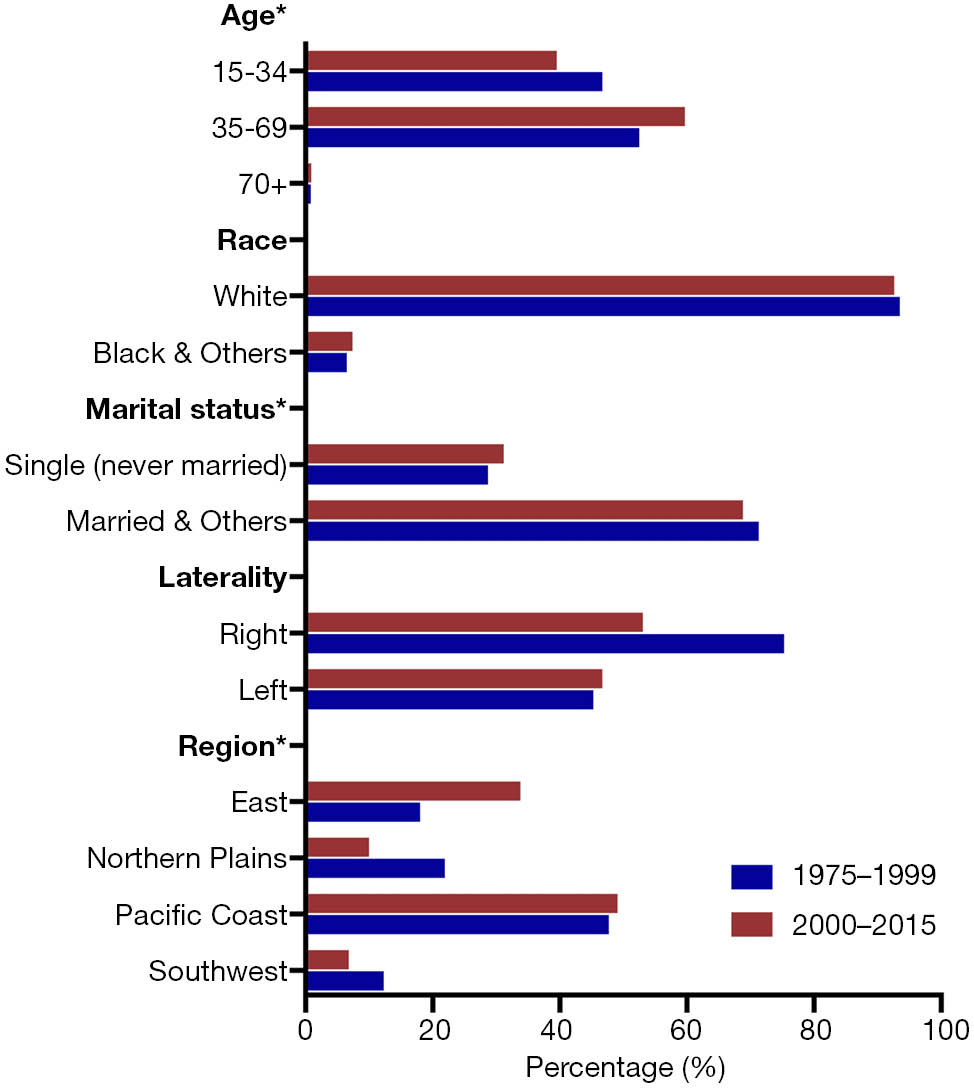 Figure 3 Characteristics of stage I seminoma patients who received radiotherapy in the 20th or 21st century. The percentage of patients with a certain age, marital status, and region (marked with *) were significantly different between 1975-1999 and 2000-2015.

To analyze the effect of changes in treatment regimens on patient outcomes, we analyzed the OS and CSS of patients with stage I seminoma (Figure 1). Results showed no significant differences in CSS. However, the OS was significantly reduced in patients in the 2000–2007 compared to the 1975–1999 time period. Despite this, the OS in 2008–2015 was not statistically different from that of 1975–1999.

The proportion of stage I seminoma patients receiving radiation therapy decreased from 100% in 1975 to 5.3% in 2015. The rate of radiotherapy for the treatment of patients with stage I seminoma was surpassed by that of surveillance in 2008 and by that of chemotherapy in 2012. Patients aged under 34 years and married patients were more likely to avoid radiotherapy in the 21st century.

Although similar observations were reported years ago, such results were no longer representative of the current situation. The present data about the proportion of patients who are refusing radiotherapy and instead choosing adjuvant chemotherapy or surveillance remains unclear. Thong et al. also reported a significant reduction in adjuvant radiotherapy, with only 37.7% of stage I seminoma patients receiving adjuvant radiotherapy in 2009 (3). Kamran et al. reported treatment trends for clinical stage I seminoma and found that the rate of radiotherapy in 2012 was nearly 18%, whereas that of surveillance was 55.7% (39/70) (14). Our study also revealed a substantial change in the role of radiotherapy for the treatment of seminoma, which decreased to a rate of 5.3% in 2015. Surveillance, rather than chemotherapy, was the main cause of such a decrease, with rates of 77.5% and 17.5% in 2015, respectively. These results suggest that based on the highly curable nature of stage I seminoma, neither radiation nor chemotherapy is an acceptable strategy for the treatment of this disease. The main concerns regarding such therapies were delayed risks, such as secondary malignancies. To avoid such a risk, and even with a risk of recurrence of 15%, treatment choices became increasingly directed towards surveillance (15,16).

Our findings suggest that the value of radiotherapy in seminomas is correctly understood and properly evaluated. Woldu et al. analyzed stage I seminoma treatment patterns, stratified by hospital volume, and found that between 2004–2014, the rate of radiotherapy decreased from 32.4% in hospitals with low case volumes to 23.5% in hospitals with high case volumes (17). A survey in west China showed that 15.5% (16/103) of patients with stage I seminoma received adjuvant radiotherapy between 2008 and 2018 (18). These results indicated a difference in familiarity with radiotherapy regimens between facilities with different case volumes. Based on such results, textbooks on radiation oncology and rotation plans in training systems should be updated in order to guide the next generation of radiation oncologists. Further, through continued medical education, all radiation oncologists should update their knowledge of the use of radiotherapy for the treatment of seminoma, and thus, ensure a toxicity-free healthcare for this patient group (19,20).

Our study found the OS of patients with stage I seminoma was improved in 2000–2007 compare to that observed in 1975–1999. Where, although no differences in OS were observed between 2000–2007 and 2008–2015, the OS of patients with stage I seminoma in 2008–2015 was not significantly different from that observed in the previous century. On one hand, the improved OS observed in 2000–2007 compared to the previous century could be due to differences in patient selection during that time period. On the other hand, it is important to note that research on adjuvant treatments are mainly non-inferiority studies. However, in the real world, such non-inferiorities could transform cumulatively to inferiority results (21). Our data cannot confirm whether the OS of stage I seminoma will drop to the level of the last century. Thus, larger prospective studies are needed to clarify such ambiguities.

This study has several limitations: (I) the sensitivity, specificity, and accuracy of treatment data in the SEER database were limited because of the integrity of the treatment fields and the biases for unmeasured reasons (22); (II) due to the good prognosis of stage I seminoma, the statistical power of the survival analysis was insufficient; (III) the multicenter retrospective study was lack of a pathological review; and (IV) the sequence and intent of these treatments cannot be identified.

We would like to thank Editage Company for English language editing.

Funding: This research did not receive any specific grant from funding agencies in the public, commercial, or not-for-profit sectors.

Reporting Checklist: The authors have completed the STROBE reporting checklist. Available at http://dx.doi.org/10.21037/tcr-20-2545

Conflicts of Interest: Both authors have completed the ICMJE uniform disclosure form (available at http://dx.doi.org/10.21037/tcr-20-2545). The authors have no conflicts of interest to declare.

Ethical Statement: The authors are accountable for all aspects of the work in ensuring that questions related to the accuracy or integrity of any part of the work are appropriately investigated and resolved. The study was conducted in accordance with the Declaration of Helsinki (as revised in 2013). The study protocol was deemed to be exempt from institutional review board of our hospital due to its retrospective nature and the need for informed consent was waived.