Malignant pleural mesothelioma (MPM) is an aggressive form of cancer that is caused by exposure to asbestos, which incidence is increasing worldwide (1). The global mesothelioma burden is estimated to be in the range of 36,300 to 38,400 annual deaths, according to the database of The World Health Organization (WHO) (1994 to 2014) (2). MPM has very poor prognosis due to its chemoresistance and radioresistance, with the median survival time (MST) of 9–12 months (3,4). MPM is difficult to early diagnosis resulting in few surgery opportunities for most patients with MPM. Therefore, early detection and diagnosis of MPM may help to increase its surgery opportunity and improve its prognosis.

In nowadays, several molecules, including estrogen receptors (5), matrix metalloproteinase 2 and 9 (6,7) have been reported as biomarkers for MPM. However, these factors were not available for early diagnosis due to lack of specificity. Therefore, it is very valuable to find a new prognostic factor for early diagnosis of MPM. Mesothelin is a glycosylphosphatidylinositol (GPI)-anchored cell-surface protein, which level of expression is low in normal tissues and high in a variety of malignant tumors, such as ovarian cancer, pancreatic cancer (8), and mesotheliomas (9). It has been reported that mesothelin can be as a marker of neoplastic progression and immunotherapy target in gastroesophageal cancer (10). However, the prognostic value of soluble mesothelin in malignant pleural mesothelioma remains unclear.

Thirty-eight patients with diagnosed MPM in the Second Hospital of Shandong University between May 2007 and December 2014 were enrolled, and followed up to August 2015. Tumor grade were determined according to the staging of International Mesothelioma Interest group (IMIG). This study was approved by the Ethics Committee of the Second Hospital of Shandong University (Permit Number: 20140195). The trial was conducted in accordance with the Declaration of Helsinki (as revised in 2013). Because of the retrospective nature of the research, the requirement for informed consent was waived.

Paraffin-embedded MPM specimens were cut into 5 mm sections for immunohistochemistry analysis. Sections were deparaffinized in xylene and then rehydrated with ethanol. For antigen retrieval, the specimens were incubated in a microwave oven (95 °C) in ethylene diamine tetraacetic acid (EDTA) (ZLI-9068, Zhongshan Golden Bridge Bio-technology, China) for 15 min. After natural cooling, endogenous peroxidase activity was blocked with 3% hydrogen peroxide for 15 min at room temperature. Then, sections were washed with phosphate buffer saline (PBS) for 5 min. Nonspecific antibody binding was blocked with goat serum (ZLI-9022, Zhongshan Golden Bridge Biotechnology, China) for 10 min. Subsequently, the specimens were incubated with rabbit polyclonal anti-mesothelin antibody (1:200, ab96869, abcam, UK) at 4 °C for overnight. Rewarming at 37 °C and then washed with PBS, the specimens were incubated with goat anti-rabbit secondary antibody conjugated with horseradish peroxidase (HRP) (PV-9000, Zhongshan Golden Bridge Bio-technology, China). Counter-stained with hematoxylin, the sections were rinsed, dehydrated and covered.

A total of 38 patients were enrolled in the present study, including 30 males and 8 females. Median patient age was 66.11±9.45 years. Twenty-six cases (68%) had a smoking history. 29 (76%) patients were epithelioid type and the others were non-epithelioid type, which included sarcomatoid and biphasic. More details were shown in Table 1. 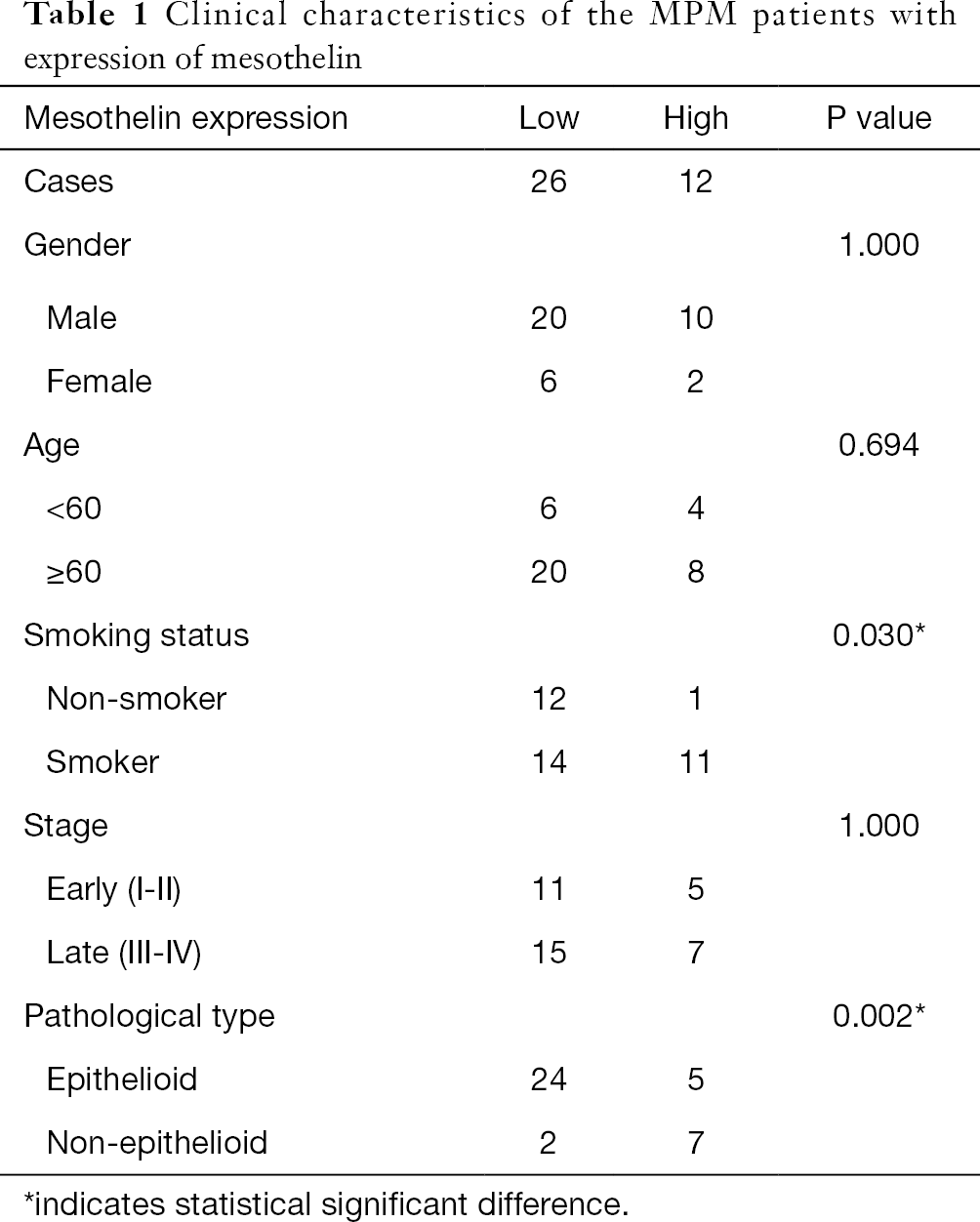 The high-level expression of mesothelin were significantly associated with higher in smokers (P=0.030) and non-epithelioid type (P=0.002). There is no significant difference of mesothelin expression in other clinic characteristics. Representative pictures for mesothelin staining are shown in Figure 1. 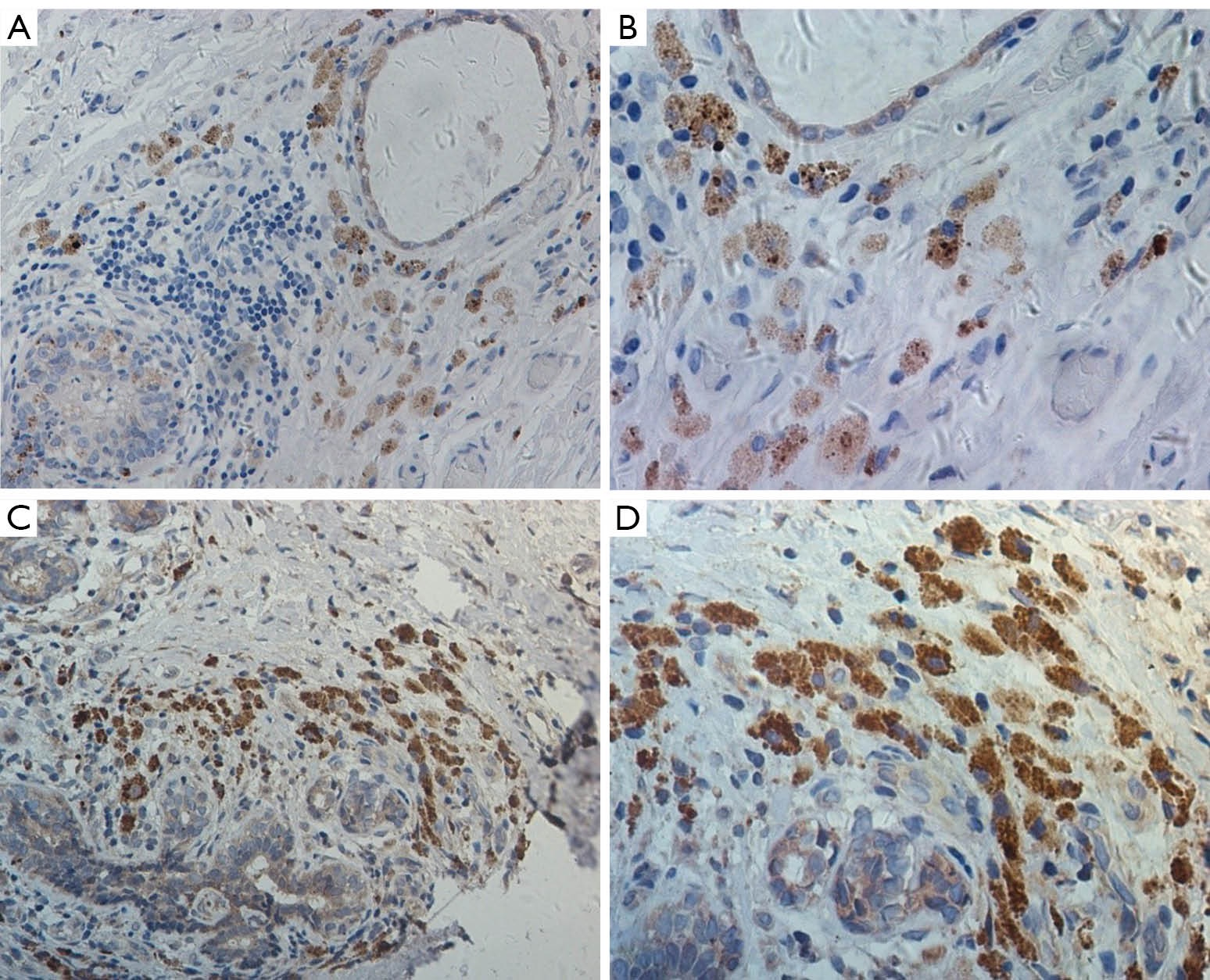 To determine the prognostic factors of MPM, the overall survival (OS) of MPM patients was analyzed based on IHC between patient characteristics and mesothelin expression respectively (Figure 2). 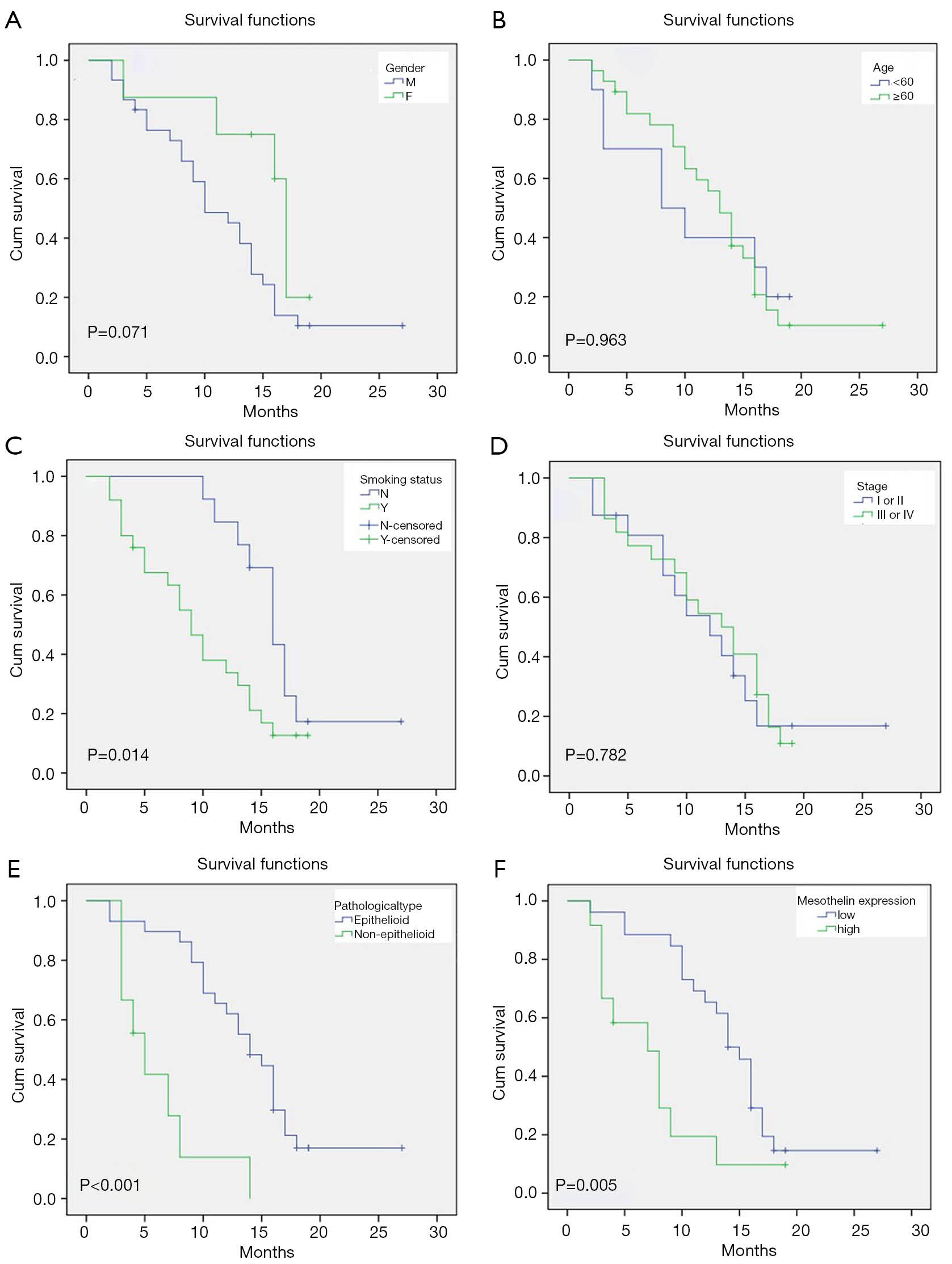 To determine which factors had the influence on the MPM patients’ overall survival, various possible predictive factors were engaged in univariate analysis (Table 2). The results indicated that smoking status (P=0.023), pathological type (P<0.001), and mesothelin expression (P=0.009) had significant effects on OS, which confirmed to the results of Kaplan-Meier overall survival curve. By multivariate Cox analysis, it was confirmed that non-epithelioid type (P=0.037) and high mesothelin expression (P=0.038) were the independent negative prognostic factors of OS for patients with MPM (Table 3).

High-level expression of mesothelin has been reported in several type of malignant tumors including MPM, lung, ovarian, pancreatic and esophageal cancer (8-10). However, its prognostic value in patients with MPM was still unknown. In the present study, the relationship between mesothelin expression and prognosis of MPM was investigated.

Mesothelin is a 40-kDa glycosyl-phosphatidylinositol-linked cell-surface glycoprotein (11). It has been reported that it might play an important role in cell adhesion and metastasis in ovarian cancers (8) and be a potential marker of neoplastic progression (12,13). In human lung cancer and mesothelioma cells, overexpression of mesothelin can promote epithelial-to-mesenchymal transition and tumorigenicity, then leads to tumor growth and metastasis (9).

In MPM, it has been known that male gender, age and asbestos exposure are considered as poor prognostic factors (14,15). Perspective from pathology in MPM, non-epithelioid type may have a worse prognosis and a longer history of asbestos exposure of higher intensity (16,17). In the present study, it has been showed that the high-level expression of mesothelin was prevalent in the smokers and non-epithelioid type. Meanwhile, the patients with high mesothelin expression showed a significantly lower OS than those with low expression. Multivariate analysis determined that mesothelin was a independent negative prognostic factor in OS of patients. As the mesothelin expression could be easily detected by immunohistochemistry, it can be served as a promising tumor biomarker for prognosis in MPM patients.

Though the previous study presented the survival advantage in female MPM patients compared to male (17). There is no significant difference of OS between different genders in the present results. Moreover, patients in early stage have not showed longer survival duration than those in late stage. The reason might be the small number of enrolled cases. Therefore, a multi-institutional study which should enroll more MPM cases will be performed.

Several studies showed that mesothelin might be a novel target for immunotherapy among several cancers (18). The treatment based on mesothelin antibody has been studied in ovarian, pancreatic cancer (8), gastroesophageal cancer (10), glioblastoma (11) and malignant mesothelioma (19). The present study confirmed that high-level expression of mesothelin in MPM predicted the poor prognosis and act as a n independent factor. Therefore, the down-regulation expression of mesothelin in MPM would be considered as a novel target therapy for MPM.

We thanked language edit performed by professional editors at Editage.

Conflicts of Interest: All authors have completed the ICMJE uniform disclosure form (available at http://dx.doi.org/10.21037/tcr-19-2027). The authors have no conflicts of interest to declare.

Ethical Statement: The authors are accountable for all aspects of the work in ensuring that questions related to the accuracy or integrity of any part of the work are appropriately investigated and resolved. The present experiment was approved by the Scientific Research Ethics Committee of the Second Hospital of Shandong University (Permit Number: 20140195). The trial was conducted in accordance with the Declaration of Helsinki (as revised in 2013). Because of the retrospective nature of the research, the requirement for informed consent was waived.