We present the following article in accordance with the CONSORT reporting checklist (available at http://dx.doi.org/10.21037/tcr-20-2573).

The study was conducted in accordance with the Declaration of Helsinki (as revised in 2013). Study protocol of the current study was approved by IRB committee of the Fudan University. The clinical registration number of this study is ChiCTR-IPR-14005499. Patients were randomly grouped by the number drawn from a sealed envelope. All patients gave their written informed consent.

Intensity-modulated radiotherapy (IMRT) was used for both extended field (abdominopelvic) radiation and pelvic radiation. Patients were at a supine position and fixed with B pillow foot pads/abdominal board. Patients were allowed to drink 800 mL water 30 min prior to simulated positioning from T10 to 5 cm below ischial tuberosity by CT scan with 5 cm fraction thickness. Patients drank an additional 800 mL water prior to the radiotherapy in order to fill the bladder. The CT images determined clinical target volume (CTV) following CBCT guidelines.

Concurrent chemotherapy was initiated on day 1 of radiotherapy with cisplatin 40 mg/m2 intravenously, once per week, 5 weeks (17).

Discrete variables were expressed by frequency (%), and Chi-square test or Fisher exact probability test was used. Kaplan-Meier curve was used for survival analysis and log-rank was used to compare the survival rates between the groups. Multi-variance cox regression analysis was used for mortality and disease progression analysis. Overall survival was defined as from the date of enrolling into this study to the date of death. Disease progression timeline was defined as from the first date of radiotherapy to date of disease progression (getting worse) was observed or death of the patient. SAS 9.3 was used for all analyses. P value <0.05 was considered as significant.

General characteristics of the patients

A total of 129 cervical cancer patients, who received radical hysterectomy followed by radiotherapy and concurrent chemotherapy with cisplatin from January 1st, 2012 to December 31st, 2017, were initially enrolled in this study. Of them, 2 patients were at stage III by FIGO and one patient did not complete the treatment, and thus, 126 cases were enrolled in the final analysis. Of the 126 patients, 62 patients received extended field-IMRT and 64 patients received pelvic-IMRT. Number of the patients who had at least 4 lymph nodes metastasis was significantly higher in the group treated with extended field-IMRT (19 out of 62, 30.65%) compared to that of the pelvic-IMRT group (9 out of 64, 14.6%, P=0.025, Table 1). There was no significant difference between the two groups in other parameters including age, tumor size, and FIGO stage (Table 1). 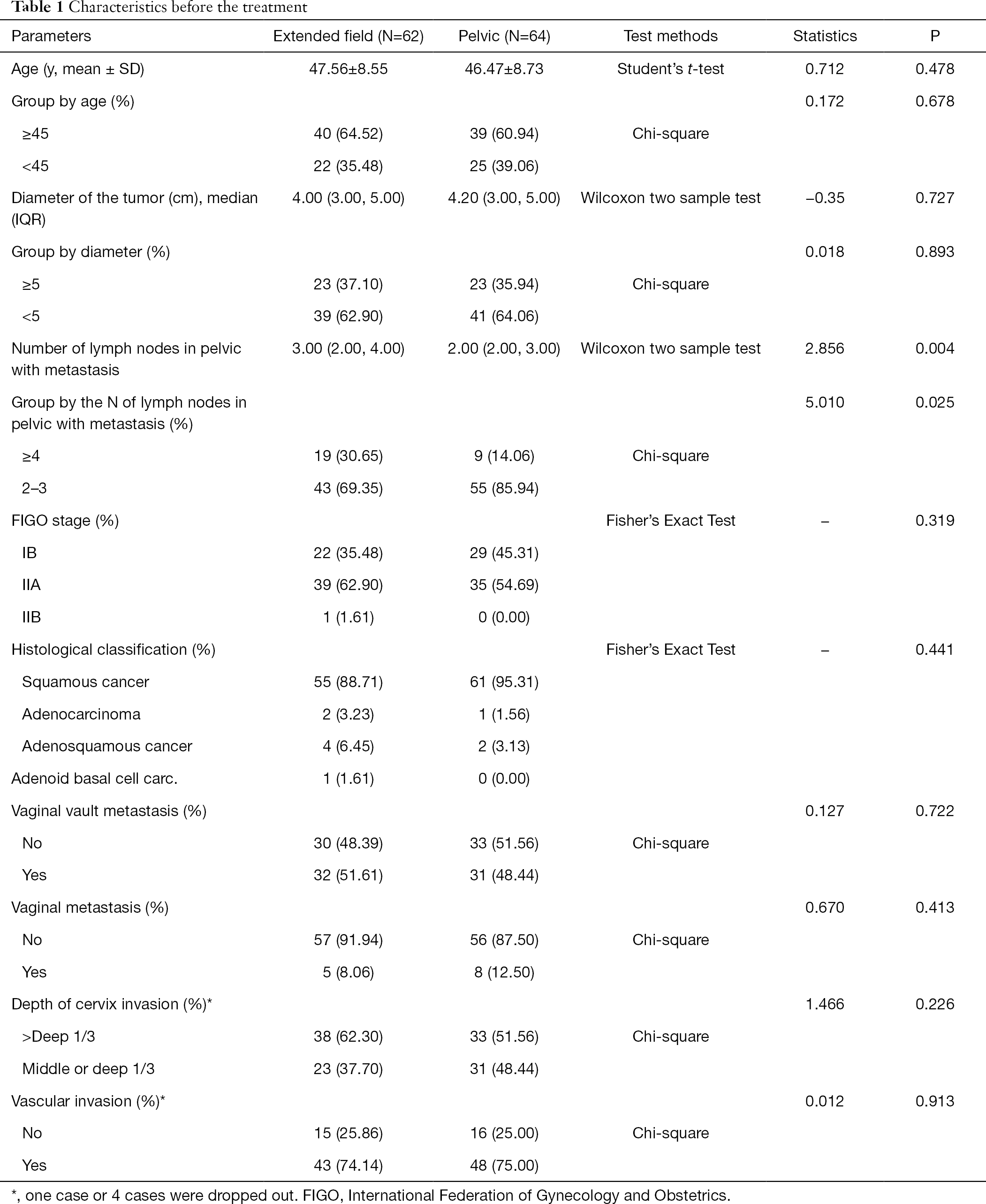 Efficacy of the treatment 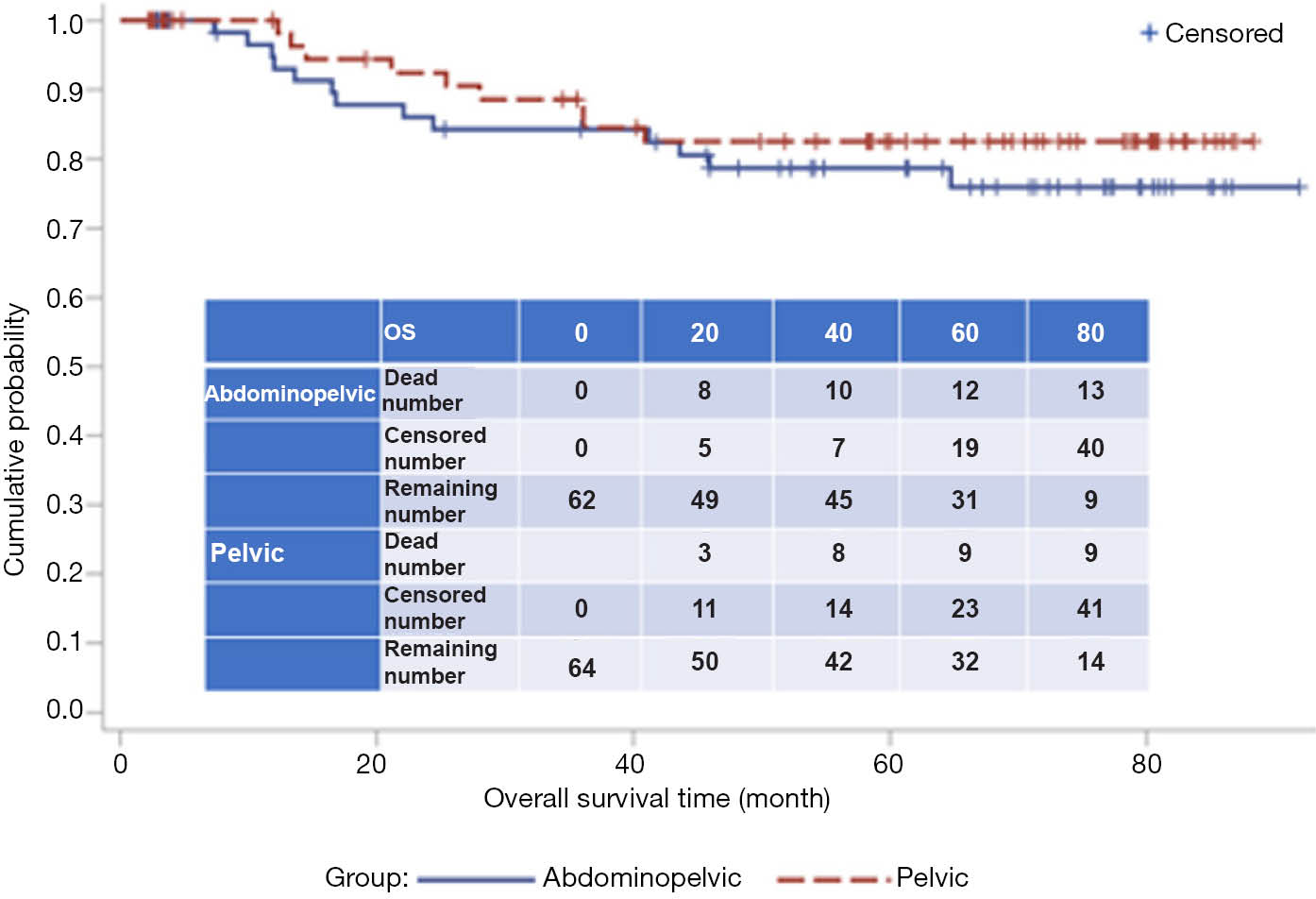 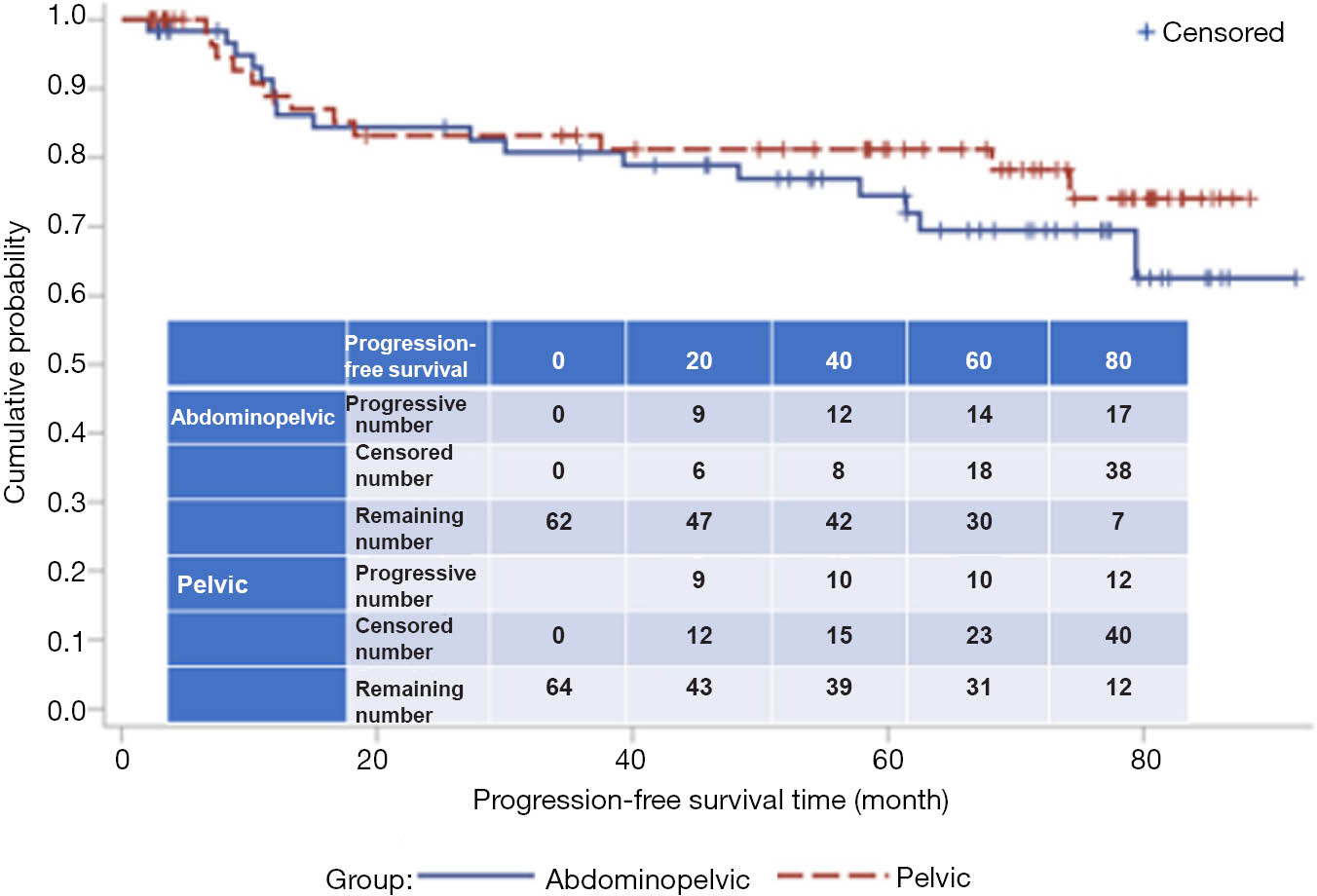 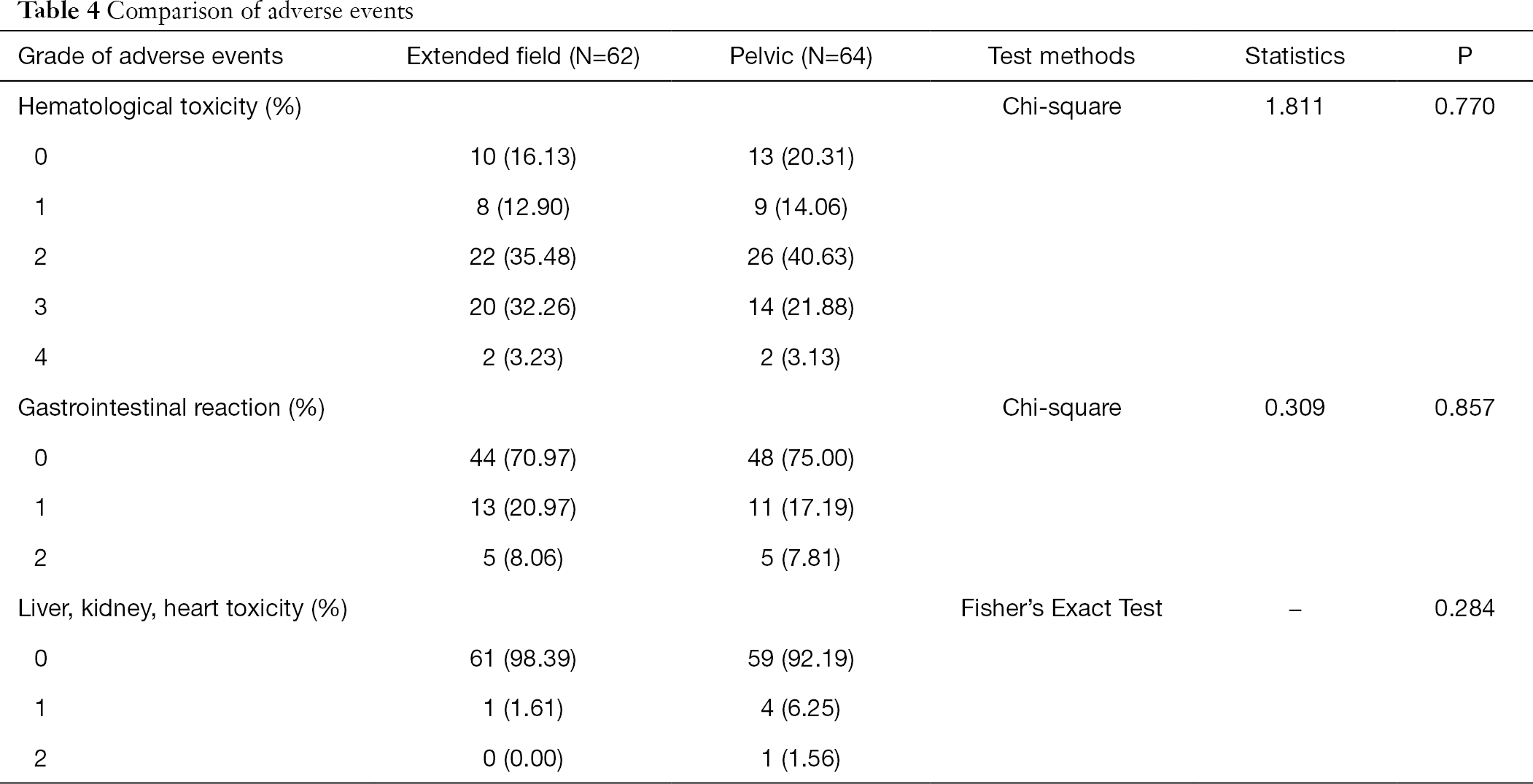 In this prospective study, cervical cancer patients, who had a radical hysterectomy, were randomized to receive either pelvic-IMRT or extended field-IMRT concurrent with chemotherapy. It was found that neither the overall survival probability nor the progression-free probability was significantly different between the two groups. In addition, there was no significant difference between the two groups in hematological toxicity, gastrointestinal reaction, liver toxicity, kidney toxicity or cardiovascular toxicity. These findings suggested that the efficacy of extended field (abdominopelvic) radiotherapy is similar to that of pelvic radiotherapy; that post-operative radiation on the extended field did not increase the adverse events of hematology and gastrointestinal tract in the cervical cancer patients with pelvic lymph node metastasis.

In a previously reported retrospective study on 25 cervical cancer patients (FIGO stage: Ib-IIb, and 2 or more pelvic lymph nodes metastases confirmed by post-operative histology examination), we found that 3-year PFS and OS were 63% and 76%, respectively, when they were treated with extended field radiotherapy plus chemotherapy (32). However, 76% of these patients had 1–2 grade decrease in leukocytes and 16% had 3–4 grade decrease in leukocytes; 60% had 1–2 grade gastrointestinal reaction and 4% had 3–4 grade gastrointestinal reaction (32). Similarly, Chen et al. reported 4.5% of the patients, who had extended-field radiotherapy plus concurrent chemotherapy, had late phase adverse events (33). Based on the findings of the previous study, the current prospective study was designed to further explore whether extended field (abdominopelvic) radiotherapy plus concurrent chemotherapy is superior to pelvic radiotherapy plus chemotherapy for the cervical cancer patients who had 2 or more pelvic lymph node metastases. To accomplish this, in the current study, patients with common iliac lymph node metastasis were excluded for that common iliac lymph node metastasis is considered as a dependent risk factor of early invasion of cervical cancer cells into the para-abdominal aortic lymph nodes (34). In addition, compared to the previous retrospective study (32), this study was modified with advanced radiotherapy techniques in the following aspects: dose and three-dimensional distribution of radiation in the important organs were more precise and thus protected the normal tissues of the organs; simultaneous radiotherapy on multiple organs and multiple fields, which resulted in optimization and improvement of the therapeutic radiation dose and efficacy. With these modifications of radiotherapy, hematological and gastrointestinal adverse events in the patients with extended field-IMRT plus concurrent chemotherapy were not significantly increased compared to those in patients with pelvic-IMRT plus chemotherapy, and there were no significant differences in terms of 5-year survival probability and 5-year progression-free probability between the two groups. The following factors might be associated with the lack of advantage in the efficacy of extended-field radiotherapy. (I) Studies indicated that the size and total number of metastatic lymph nodes is associated with patients’ prognosis (29,35). In the current study, while the size of the metastatic lymph nodes was not significantly different between the two groups, the number of positive pelvic lymph node metastasis (≥4) was significantly higher in the extended field-IMRT group than that in the pelvic-IMRT group. (II) Extended field radiotherapy could more significantly suppress patients’ immunity, which is a crucial factor affecting outcomes of tumor treatment. (III) While this was a prospective, randomized and multicenter study, the number of cases was limited and the follow-up period was short.

Recently, several studies reported reduction of adverse effects of radiotherapy or CCRT through strategies such as a sequential strategy of systemic chemotherapy followed by radiotherapy, and IMRT (36,37). Particularly, the high precision technique of IMRT could spare adjacent risk organs by precisely targeting selected field. In this regard, studies have demonstrated that IMRT with weekly cisplatin reduced gastrointestinal complications for FIGO stage Ib2-Iva cervical cancer patients after radical surgery (38). Therefore, IMRT was used in the current study and the adverse events were not significantly increased even in the extended filed CCRT.

Taken together, the current study demonstrated that efficacy of extended (abdominopelvic) filed-IMRT concurrent with chemotherapy was similar to that of pelvic-IMRT plus chemotherapy; that extended-field IMRT did not increase adverse events of hematology and gastrointestinal tract.

Reporting Checklist: The authors have completed the CONSORT reporting checklist. Available at http://dx.doi.org/10.21037/tcr-20-2573

Conflicts of Interest: All authors have completed the ICMJE uniform disclosure form (available at http://dx.doi.org/10.21037/tcr-20-2573). The authors have no conflicts of interest to declare.

Ethical Statement: The authors are accountable for all aspects of the work in ensuring that questions related to the accuracy or integrity of any part of the work are appropriately investigated and resolved. The study was conducted in accordance with the Declaration of Helsinki (as revised in 2013). This study was approved by IRB committee of the Fudan University. The clinical registration number of this study is ChiCTR-IPR-14005499. All procedures performed in studies involving human participants were in accordance with the ethical standards of the institutional and/or national research committee. All patients gave their written informed consent.