Non-small-cell lung cancer (NSCLC) is a leading cause of cancer-related death world-wide. The molecular classification of lung adenocarcinoma and corresponding target therapy have effectively improved the survival status of lung cancer (1). Tyrosine kinase inhibitor (TKI) is the specific targeted therapy, which is the personalized medicine revolution in the treatment of advanced-stage NSCLC, the biomarker-defined indications for targeted therapy include epidermal growth factor receptor (EGFR)-mutant, ALK-rearranged (ALK+), ROS1-rearranged or BRAFV600E-mutant (2). In recent years, along with the development of immunotherapy, such as anti-programmed cell death 1 (PD-1), tumor mutational burden (TMB), tumor-infiltrating lymphocytes (TILs), which are also the treatment landscape of NSCLC (3). Among many molecular subtypes of lung adenocarcinoma, EGFR-mutated lung adenocarcinoma accounts for more than 50% in Chinese patients (4). EGFR is one of the four members of ErbB family of tyrosine kinase receptors. Activation of EGFR leads to regulating cellular proliferation, differentiation, and survival (5). EGFR has been identified as an oncogenic driver of NSCLC, especially EGFR mutations and its inhibition with specific TKIs have an important impact on tumor (6). Researches on the efficacy and resistance mechanism of EGFR tyrosine kinase inhibitors (EGFR-TKIs) have facilitated the continuing renewal of a series of targeting drugs. However, virtually all advanced lung cancer patients with EGFR mutation will inevitably acquire resistance or have primary resistance to EGFR-TKIs. Among these, mesenchymal-epithelial transition factor (C-Met) amplification or exon 14 splice mutation is one of the factors (7). C-Met is a multifunctional transmembrane tyrosine kinase and acts as a receptor for hepatocyte growth factor (8). It has been shown that there is a significant correlation between C-Met amplification and C-Met protein expression (9). In the patients with stage IV or treated with erlotinib after failure of first-line chemotherapy, EGFR mutation was correlated with progression-free survival (PFS) and response rate of erlotinib. While C-Met amplification of gene copy number did not show a significant correlation with erlotinib or PFS (10). According to our clinical observation, advanced patient with high C-Met protein expression alone could benefit from crizotinib (11). Nevertheless, in recent years, researchers have paid more attention to mechanisms of EGFR T790M-mutant and Met amplifications that responsible for acquired resistance to EGFR-TKIs, while little is known about the high expression of C-Met protein with primary EGFR mutation and its significance in lung adenocarcinomas.

We present the following article in accordance with the STROBE reporting checklist (available at http://dx.doi.org/10.21037/tcr-20-2202).

All pathologically diagnosed pulmonary adenocarcinoma surgical resection specimens were consecutively collected from the Department of Pathology of National Cancer Center/Cancer Hospital, Chinese Academy of Medical Sciences from 2013 to 2015. In total, 446 cases were enrolled into the analysis, among which 439 underwent curative intent surgical resection, and the other seven underwent palliative surgery. None of the patients received preoperative adjuvant chemotherapy. Clinicopathological data were extracted from medical archives, including age, gender, and AJCC 7th pathological stage and so on.

All 446 archived pathological reports and slides were reviewed by two senior pathologists (HL and LY), according to the 2015 World Health Organization classification of lung tumors (12). Differentiation degree was also included as one of the observing variables which was defined as mild, moderate and poorly degree according to extent of difference between tumor tissue and normal lung tissue. The inclusion criteria for enrolled cases are: (I) underwent surgical resection from 2013 to 2015, (II) the pathological diagnosis of adenocarcinoma, (III) not under preoperative chemoradiotherapy. The exclusion criteria documents of clinicopathological is incompletely.

All surgical specimens were routinely fixed in 10% formalin for about 24 h at 10 times the volume of the tissue liquid, and then embedded in paraffin. Consecutive 4-µm-thick sections and wax roll were prepared for immunohistochemical staining and real-time PCR (RT-PCR), respectively.

C-Met protein expression was determined by immunohistochemistry (IHC). All staining steps were completed on the fully automatic Roche immunohistochemical instruments (Roche Diagnostics, Shanghai, China) according to the recommended standard protocols. C-Met protein was localized primarily in the cytoplasm (Figure 1). According to the manufacture’s scoring algorithm, intensity was scored according to a four-tier system: including negative (0), no staining or less than 5% staining; weakly positive (1+), 5–25% tumor cells stained; moderately positive (2+), 25–50% tumor cells stained; strongly positive (3+), >50% tumor cells stained. Negative quality control sections were first evaluated to remain unstained before evaluation for immunostaining on every case. For statistical analysis, negative or low expression was defined as 0 and 1+, and high expression was defined as 2+ and 3+.

Independent Chi-square test was used to compare frequency of clinicopathological characters between C-Met high expression and low expression groups, and between EGFR mutant and wild type groups. Spearman correlation analysis was made between EGFR mutation and C-Met protein expression. The statistical analyses were conducted using SPSS version 24.0 software. Statistical significance was set as P<0.05 (two side).

The study was conducted in accordance with the Declaration of Helsinki (as revised in 2013). The study was approved by Ethics Committee of National Cancer Center/Cancer Hospital, Chinese Academy of Medical Sciences and Peking Union Medical College (No. 20/234-2430) and informed consent was taken from all the patients. 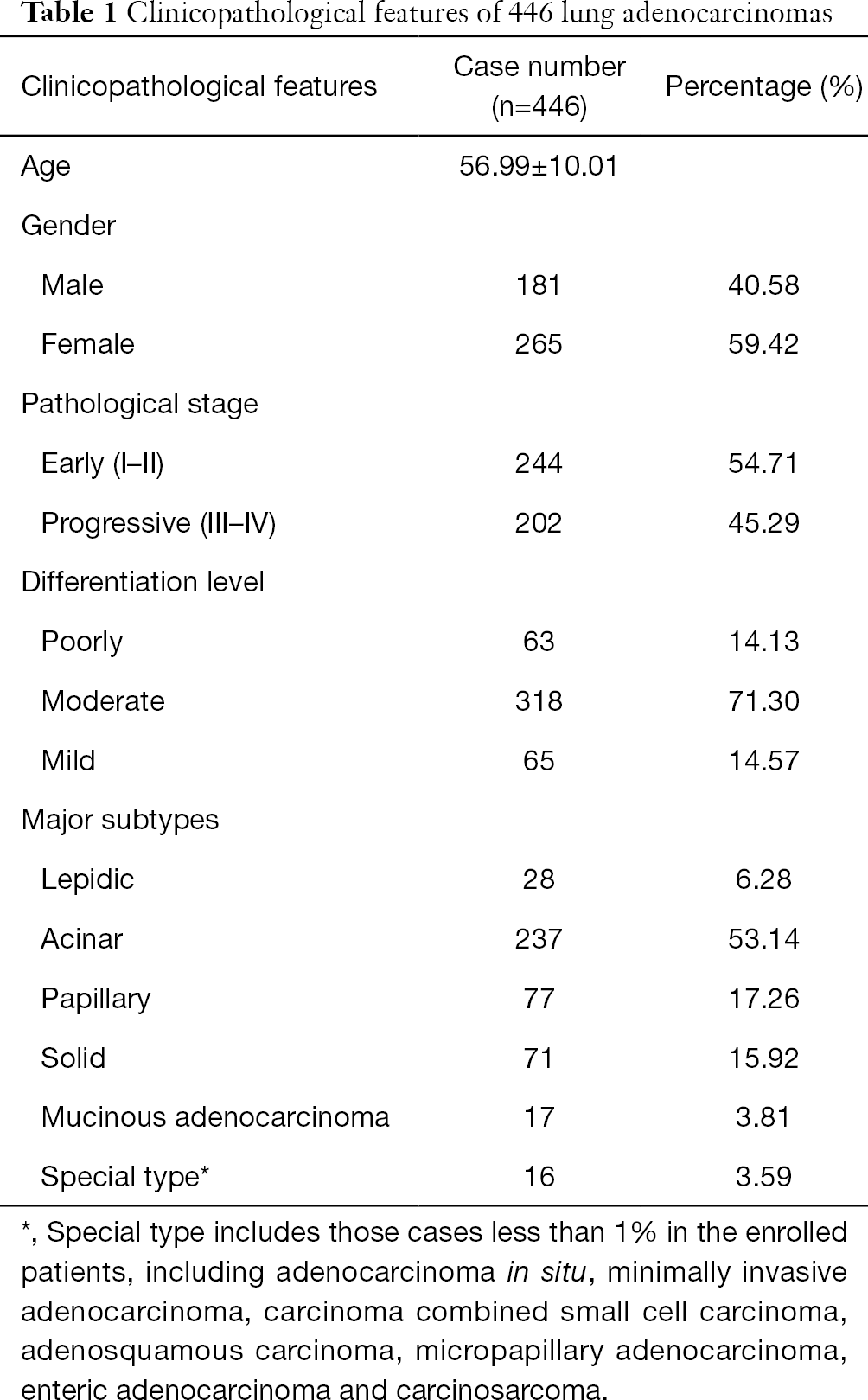 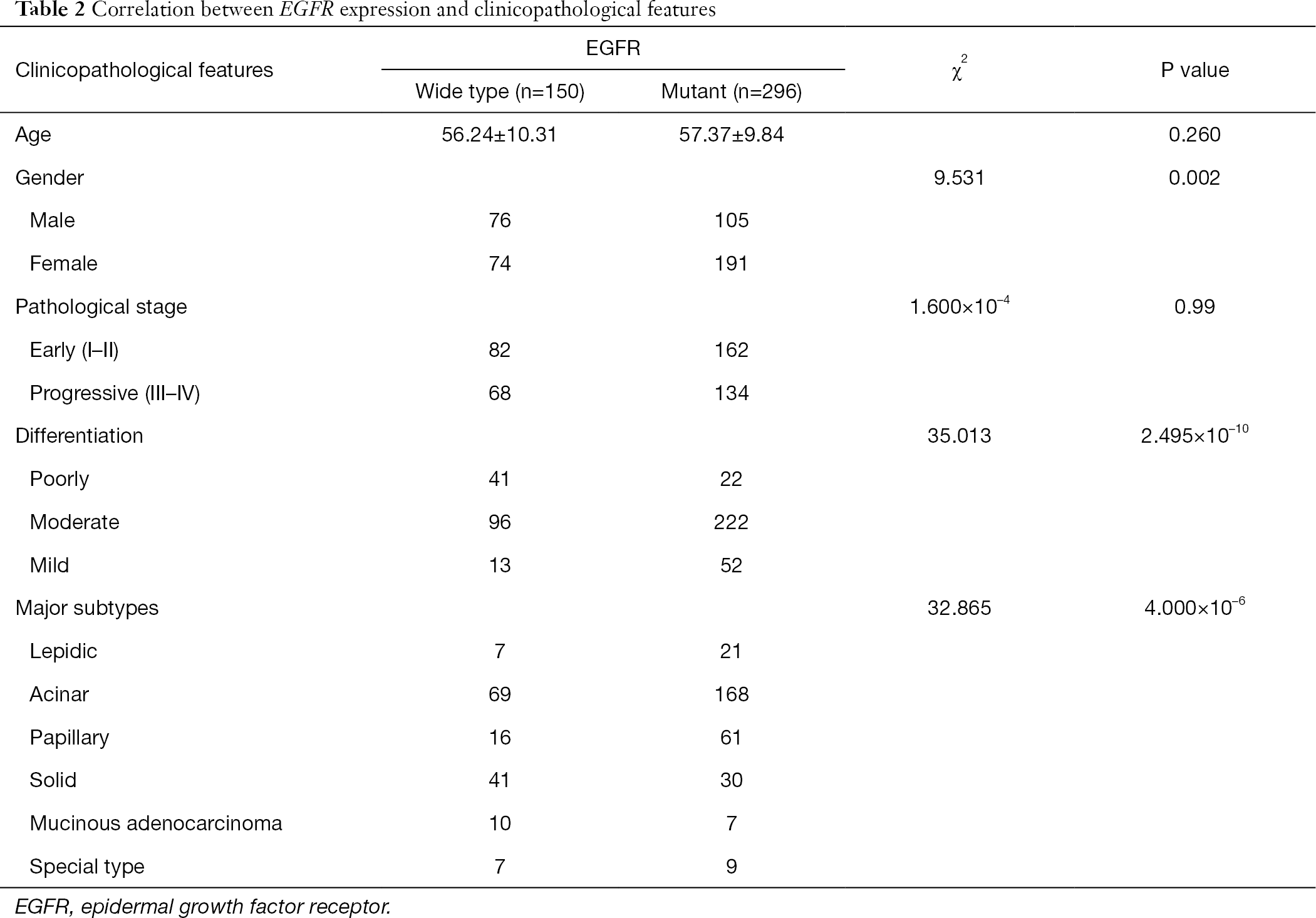 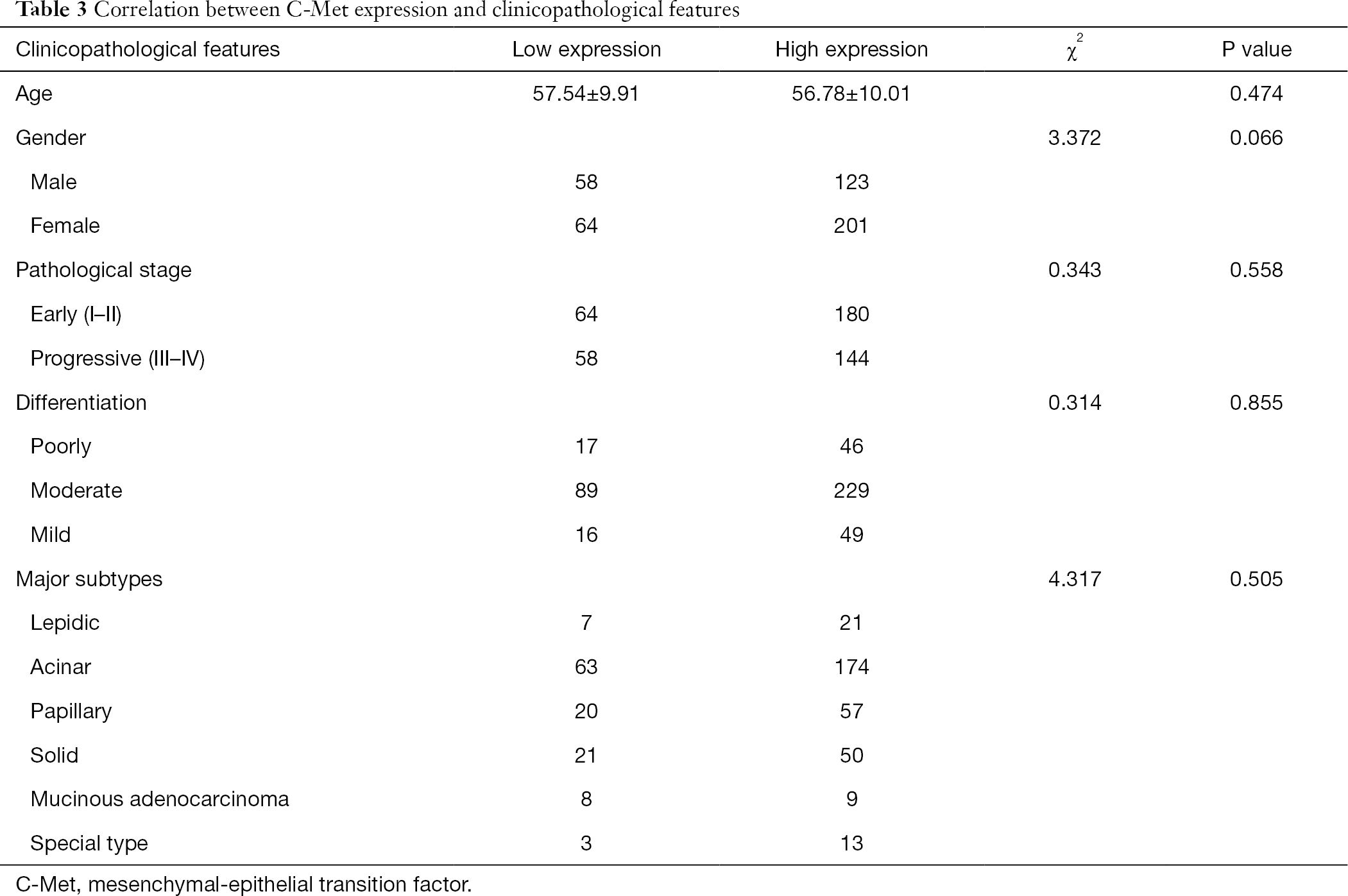 The molecular classification of lung adenocarcinoma and corresponding target therapy have effectively improved the clinical outcome of lung cancer, especially in patients with EGFR sensitive mutations (13). EGFR overexpression and/or mutation are associated with tumor cell proliferation, angiogenesis, tumor invasion, metastasis and inhibition of apoptosis. NSCLC patients with high expression of EGFR mutation are more prone to recurrence and metastasis (14). Likewise, in our study, 64.53% females had EGFR mutation. As there are interactions between the EGFR pathway and the estrogen receptor, EGFR mutations may be associated with estrogen (15). In adenocarcinomas, EGFR mutation correlated with estrogen receptor α expression (P=0.0029 to <0.0001) (16), and the expression of estrogen receptor β (P=0.029) (17). Meanwhile, the study showed a significant correlation of EGFR mutation with histological subtypes, which coincides with literatures (18). Ninomiya et al. (19) found that the hobnail cell type and a micropapillary morphology could predict a higher incidence of EGFR mutations in lung adenocarcinomas, meanwhile, Lee et al. (20) found EGFR mutations were frequent in well to moderately differentiated lung adenocarcinomas. Likewise, the current research showed that mild and moderate differentiated adenocarcinomas were more frequently mutated, and the mutation rate was also significantly correlated to lepidic, acinar and papillary histological subtypes, which indicated the differentiation degree and histological subtypes supported each other.

NSCLC are often intrinsically resistant to certain anticancer drugs, but our knowledge about drug resistance are still far from having a complete understanding of the underlying mechanisms. Currently, there are two specific mechanisms of acquired drug resistance, which includes T790M mutation and C-Met amplification, accounting for 50% and 20% of acquired resistant cases, respectively (7,21). Other possible mechanisms include a lack of phosphatase and tensin homolog deleted on chromosome ten (PTEN) (22), down-regulation of BIM (23), up-regulation of Integrin β1 (24), high expression of HGF (25), activation of ALK pathway (26). As for C-Met gene, gene amplification was found a mainly cause for EGFR-TKIs resistance which was first discovered by Engelman et al. at 2007 (7). Although, biologically, C-Met amplification may not necessarily lead to efficient protein expression for real function execution of the gene, which are possibly influenced by epigenetic factors, although not common. A study of Met protein expression and C-Met amplification in 316 surgically resected lung adenocarcinomas found that C-Met amplification was significantly associated with Met protein expression (P<0.001) (9). According to NCCN guidelines, the protein overexpression has not been routinely recommended for testing before EGFR-TKIs regimens. Instead, the newly updated NCCN guidelines recommend testing for C-Met gene amplification and exon 14 splice site mutation as of crizotinib targeting therapy (27). We experienced one advanced lung adenocarcinoma with C-Met protein overexpression benefitted from crizotinib (11), which suggests that the detection and analysis of C-Met protein in lung adenocarcinoma may play a role. Awad et al. found that patients with C-Met exon 14-mutation had a significant likelihood to have concurrent Met amplification and C-Met protein overexpression in NSCLC (28), meanwhile, C-Met IHC staining was a positive prognostic biomarker for overall survival in early stage NSCLC (29). In our study, the expression of C-Met protein showed a positive correlation tendency to gender (P=0.066), which is similar to Tsuta’s research (30). In another published larger investigation of 1,479 cases from our group, we identified a significant correlation of the expression of C-Met protein and gender (31). In this research, we also found a female concentration trend and positive correlation of both EGFR mutation and C-Met expression in lung adenocarcinoma, which was consistent with Nakamura et al. (32). Nakamura et al. identified phosphor-C-Met correlated with phospho-Akt (P=0.0381), and phospho-Akt expression was correlated with the expression of phospho-EGFR (P=0.0533). As activation of Akt is related to antiapoptotic of tumors, we can speculate that inhibition of the C-Met pathway may provide an alternative therapeutic approach in lung adenocarcinomas with resistance to EGFR inhibitors.

In conclusion, from the current research, we identified that overexpression of C-Met protein was positively correlated with EGFR mutation, which indicated that a synergistic effect may exist between EGFR and C-Met in lung adenocarcinoma and may somehow play a role in primary drug resistance of EGFR-TKIs. Still, there are two limits lie in our study. Firstly, we failed to identify EGFR related target therapy due to the insufficiencies of enrolled advanced cases in the curatively surgical specimens. Secondly, since we choose surgical resection specimens to study, the correlation between the therapeutic effect of EGFR-TKIs and the expression of C-Met protein could not be observed, which will be extended for further study.

Reporting Checklist: The authors have completed the STROBE reporting checklist. Available at http://dx.doi.org/10.21037/tcr-20-2202

Conflicts of Interest: All authors have completed the ICMJE uniform disclosure form (available at http://dx.doi.org/10.21037/tcr-20-2202). The authors have no conflicts of interest to declare.

Ethical Statement: The authors are accountable for all aspects of the work in ensuring that questions related to the accuracy or integrity of any part of the work are appropriately investigated and resolved. The study was conducted in accordance with the Declaration of Helsinki (as revised in 2013). The study was approved by Ethics Committee of National Cancer Center/Cancer Hospital, Chinese Academy of Medical Sciences and Peking Union Medical College (No. 20/234-2430) and informed consent was taken from all the patients.