Breast cancer is the most common cancer (excluding skin cancers) and is the second leading cause of cancer death among women (1,2). Axillary lymph node status is important for the staging of breast cancer to evaluate the recurrence, metastasis and prognosis (3,4). According to the current tumor-node-metastasis (TNM) staging system for breast cancer of American Joint Committee on Cancer (AJCC) and other committees, 6–10 axillary lymph nodes at least should be collected from the breast cancer specimens for accurate histologic examination and proper tumor stage (5,6). The N stage is evaluated by the number of positive lymph node (PLN); however, each patient is heterogeneous and the prognosis of the patient is limited and inaccurate by only evaluating the node-stage. Therefore, the concept of negative lymph node (NLN) count has been proposed in a variety of cancers as a complement to N stage, such as colon (7), cervical (8), gastric (9) and esophagus (10) cancer. In fact, NLN count as a predictor has also been reported in breast cancer, but was not primarily described and is a single-center study (11).

To better assess the association between NLN count and breast cancer survival, we used data from the Surveillance, Epidemiology, and End Results (SEER) database, which is a multicenter and large database established by the National Cancer Institute (NCI), to provide support for this study. We present the following article in accordance with the STROBE reporting checklist (available at http://dx.doi.org/10.21037/tcr-20-2351).

Clinical characteristics of patients were obtained from the SEER research data (November 2019 submission) and R version 3.5.1 was used to identify female patients who underwent axillary lymph node dissection (ALND) diagnosed with invasive ductal and lobular (International Classification of Diseases for Oncology code 8522/3) between 2000 and 2013. Patients with no radiotherapy or radiotherapy after surgery were included. Patients were excluded if they were with bilateral breast cancer, with distant metastasis (M1), had one primary cancer but the breast was not the first one, had undefined T or N stage, had incomplete estrogen receptor (ER) and progesterone receptor (PR) status, had unknown cause of death or survival months. Year of diagnosis, age, race, tumor grade, AJCC T stage, AJCC N stage, ER and PR status, radiotherapy and chemotherapy were assessed. As patients with no PLN account for about 2/3 of the total data, we selected patients with node positive for analysis to prevent the bias on the cutoffs of NLN. T0 stage was eliminated because there was only one patient in this group. The study was conducted in accordance with the Declaration of Helsinki (as revised in 2013). Ethical approval was not required because we have signed the SEER research data agreement to access SEER information.

The X-tile program (http://www.tissuearray.org/rimmlab/) was used to determine the cutoffs for NLN count with the minimum P values and maximum Chi2 test (12). The Kruskal-Wallis test was performed to compare continuous variables. Categorical variables were compared by using the Pearson test. The Kaplan-Meier analysis was used to calculate the survival rate, which were analyzed by Log-rank test. The survival curves were plotted by GraphPad Prism version 6.0. The Cox proportional hazard regression model was used to identify the independent prognostic factors for survival. Data analysis was performed using SPSS version 22.0. Difference with P <0.05 was considered to be statistically significant.

The optimal cutoffs for NLN count

NLN count was treated as continuous variable and then it was validated as an independent prognostic factor by univariate Cox analysis [hazard ratio (HR), 0.926; 95% CI, 0.918–0.934, P<0.001]. Then, the X-tile program was used to determine the optimal cutoffs for NLN count. As a result, cutoff value of 2 and 10 could divide the patients into high, middle and low risk subgroups (Figure 1), of which the 5-year breast cancer-specific survival (BCSS) rate were 64.6%, 83.0% and 91.8%, respectively (χ2=426.0, P<0.001). Clinical characteristics of patients in different NLN count subgroups were compared with each other. As was shown in Table 1, the age, year of diagnosis, tumor grade, AJCC T stage, AJCC N stage, ER and PR status and radiotherapy were significantly different among patients with different NLN counts. While in these subgroups, the proportion of patients with the same race or chemotherapy were basically analogous.

Figure 1 The cutoffs for negative lymph node count was determined by the X-tile program based on 5-year breast cancer-specific survival (χ2=425.7, P<0.001). 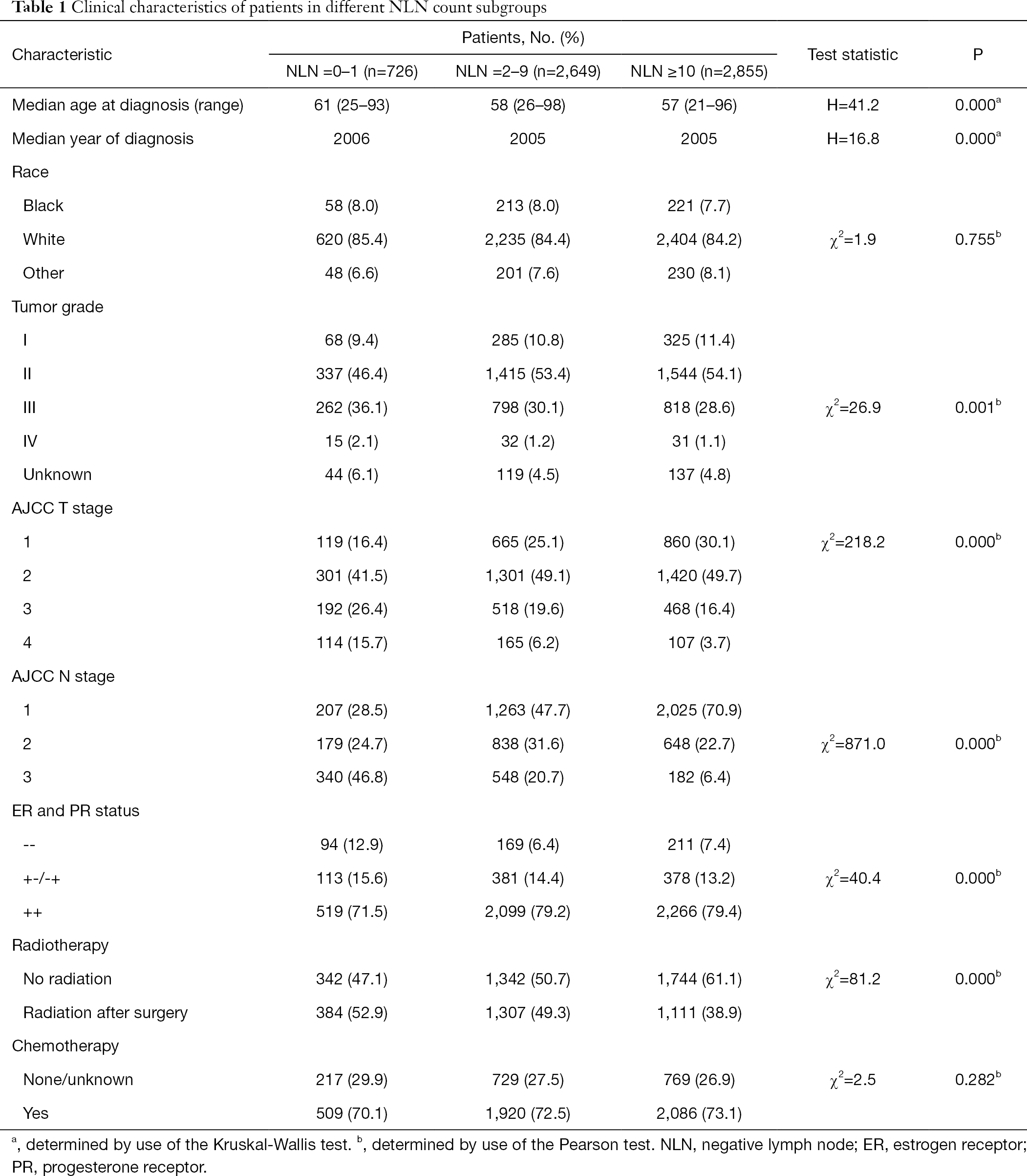 According to univariate analysis in Table 2, patients with NLN count ≤1, over 60 years old, being black, higher tumor grade, higher T or N stage, negative hormone receptor or no radiotherapy would more likely suffer poor survival outcome. Year of diagnosis was associated with significant differences in 5-year BCSS rate, although the correlation is less obvious than other factors (χ2=3.9, P=0.048). Both ER and PR positive was associated with higher odds of survival compared with ER or PR positive or ER and PR negative (χ2=207.4, P<0.001). However, according to the data, chemotherapy had no significant effect on 5-year BCSS rate, which was clinically inconsistent (χ2=2.6, P=0.106). 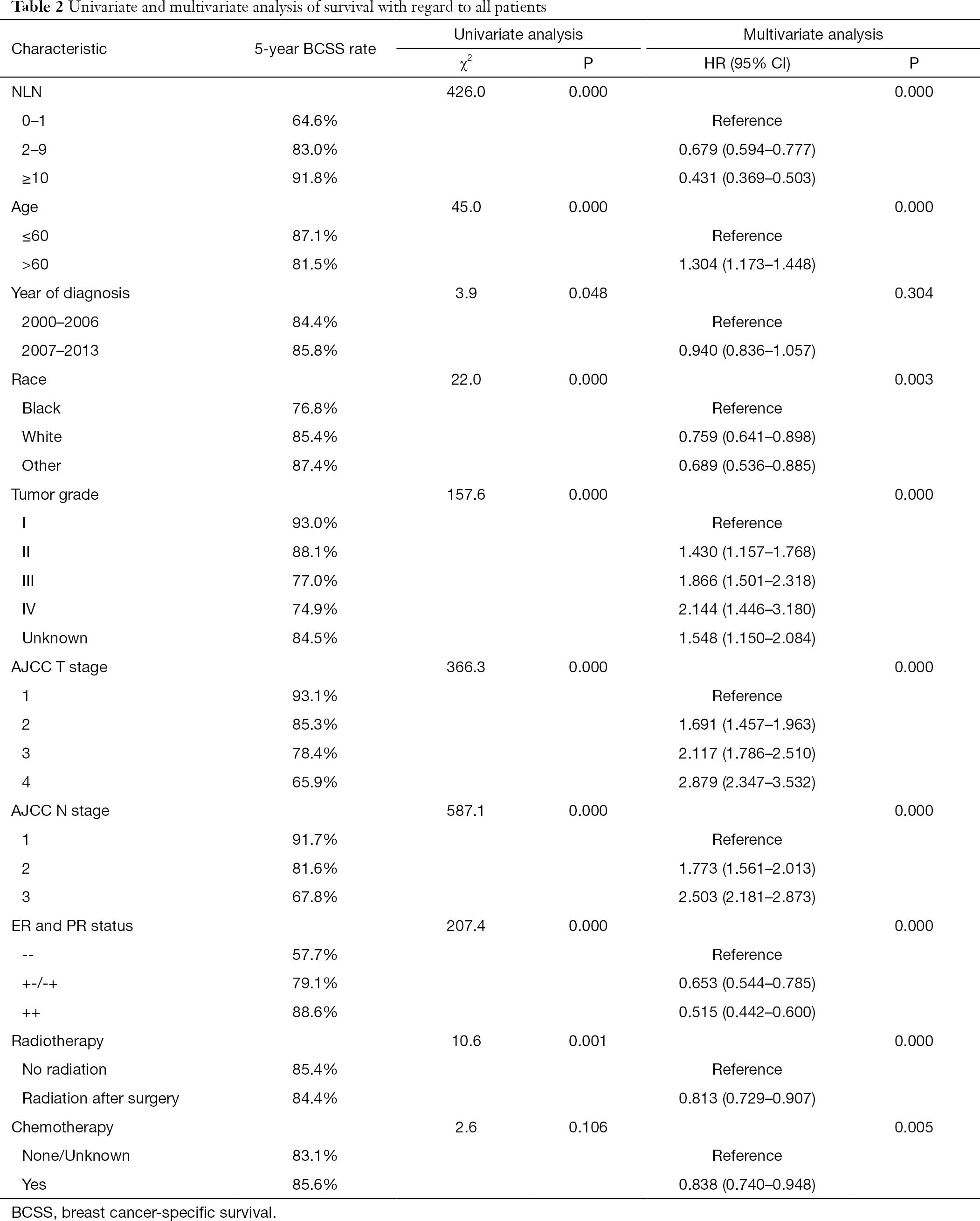 To further analyze the prognostic value of NLN count, different subgroups were ulteriorly divided by NLN count. Figure 2A showed that patients with NLN count ≤1 and older age suffered the highest risk of death. In race subgroup, the curve of black patients with NLN count ≤1 showed the most significant downward trend (Figure 2B). When patients were stratified based on tumor grade, higher NLN count still demonstrated higher survival (Figure 2C). Kaplan-Meier survival analysis of patients stratified by NLN count and AJCC T stage revealed that lower number of NLN and higher T stage resulted in a significantly worse breast cancer BCSS (Figure 2D). Likewise, AJCC N stage subgroup could demonstrate the same result as T stage (Figure 2E). Hormone receptor-negative breast cancer patients with NLN count ≤1 had the greatest reduction in survival, even compared with other subgroups (Figure 2F). Subgroups based on whether or not receiving radiotherapy or chemotherapy stratified by the cutoffs of NLN count also showed significant survival differences (Figure 2G,H). 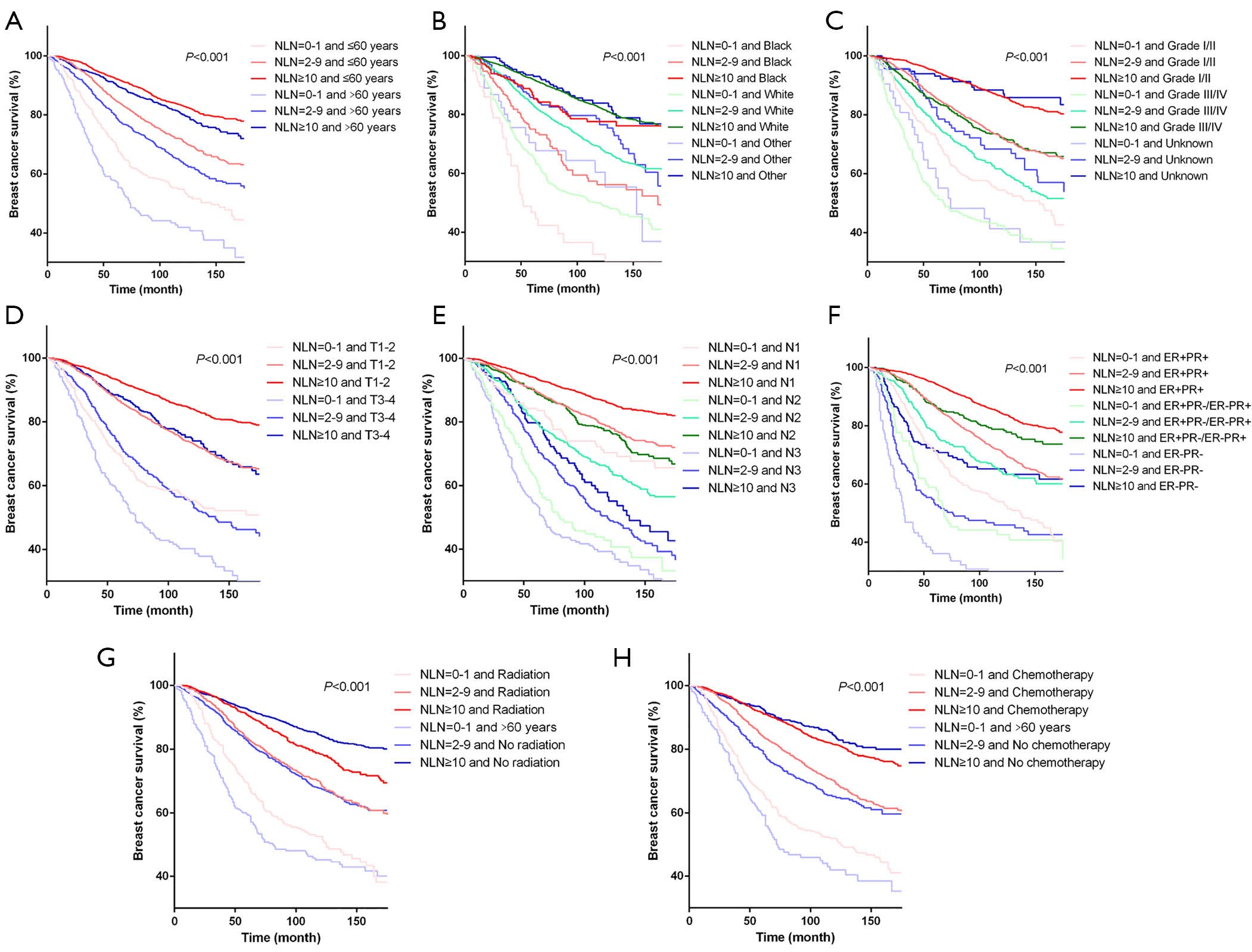 The TNM staging system is routinely used to evaluate survival outcome in patients, in which N stage represents the number of lymph nodes found to contain metastases, namely PLNs. However, the removed axillary lymph nodes consist of PLNs and NLNs and the number of PLNs is often affected by many facts such as neoadjuvant therapy, so it is not accurate to estimate the prognosis only by the number of PLNs. Recently, several studies have demonstrated that a high NLN count is associated with an improved survival. Mo et al. found that in esophageal cancer a better overall survival (OS) was observed with increasing number of NLNs and NLN count was an independent prognostic factor (13). Likewise, Hao et al. concluded that the high NLN had improved BCSS and OS compared to low NLN and histone modifiers were the most significant different biological processes between the high and low NLN group through transcriptomic analysis (14).

In this study, we screened female patients with node positive breast cancer after modified radical mastectomy from the SEER database, and found that NLN count can be a strong predictor for these patients. Additionally, age, race, tumor grade, AJCC T or N stage, radiotherapy and chemotherapy also have association with the survival of breast cancer patients. Even when patients were stratified based on the above subgroups, reduction in NLN count was still strongly associated with lower 5-year BCSS rate. We found that in multivariate analysis chemotherapy was associated with 5-year BCSS rate but not in univariate analysis, which might because the SEER database lacks specific descriptions of chemotherapy regimens and only provides information on whether patients have received chemotherapy. As a result, factors such as patient preferences, physician recommendations, comorbidities, and proximity to treatment providers might lead to bias.

At present, the mechanism by which NLN is associated with survival is unclear, but there are some conjectures. Firstly, the recurrence and metastasis of breast cancer may be achieved by the remaining PLNs, especially those with micrometastases, which is difficult to find during operation (15,16). The more NLNs removed, the fewer lymph nodes with micrometastases is, thus improving survival. Secondly, more NLNs means that more total lymph nodes are examined, and the N stage will be more reliable for the assessment of survival. On the other hand, it reflects the skill of surgeon and the success of the operation. Thirdly, NLN may reflect the response of lymph nodes to the tumor, and the high NLN count may indicate fewer circulating tumor cells, which has an independent effect on survival (17).

In conclusion, our study still suggests that NLN count is a potentially effective predictor of breast cancer and is a good supplement for N stage and TNM stage. Increased NLN retrieval can improve BCSS. NLN count can predict the prognosis of breast cancer more accurately combined with age, race, tumor grade and stage, receptor status, chemotherapy and radiotherapy.

There was no assistance or efforts beyond those of the primary authors.

Reporting Checklist: The authors have completed the STROBE reporting checklist, available at http://dx.doi.org/10.21037/tcr-20-2351

Conflicts of Interest: Both authors have completed the ICMJE uniform disclosure form (available at http://dx.doi.org/10.21037/tcr-20-2351). The authors have no conflicts of interest to declare.

Ethical Statement: The authors are accountable for all aspects of the work in ensuring that questions related to the accuracy or integrity of any part of the work are appropriately investigated and resolved. The study was conducted in accordance with the Declaration of Helsinki (as revised in 2013). Ethical approval was not required because we have signed the SEER research data agreement to access SEER information.