Correlation between the overexpression of epidermal growth factor receptor and pathological features of gastric cancer: a meta-analysis

We present the following article in accordance with the PRISMA reporting checklist (available at http://dx.doi.org/10.21037/tcr-20-2035).

PubMed, Embase, Web of Science, China National Knowledge Infrastructure, Wanfang were searched the relevant literature between January 2009 to March 2020 with “gastric cancer”, “erbB1”, “Her1”, “EGFR”, “epidermal growth factor receptor” as keywords. Subsequently, the searched literature was manually screened by reading the abstract and the full text. The language was limited to Chinese and English.

(I) Randomized case-control study published at home and abroad, with original data and using immunohistochemistry (IHC) as detection method. (II) Study on clinicopathological characteristics or prognosis of gastric cancer and EGFR overexpression (note: EGFR positive expression 26–50% was defined as overexpression, >50% was defined as high expression). (III) Study that patients in the study group had clear pathological diagnostic criteria, and all had complete clinicopathological data, and had not received radiotherapy or chemotherapy before surgery; the control group was normal tissues adjacent to cancer or benign diseases. (IV) Study with appropriate statistical method, reliable data, clear results; at least one of the pathological features such as differentiation degree, lymph node metastasis and TNM staging, could calculate the odds ratio (OR) and its 95% confidence interval (CI). Clinical stage was determined according to the TNM staging criteria formulated by the International Union against Cancer and American Joint Committee on Cancer.

(I) Other detection methods were applied except IHC, such as qPCR or Western blot. (II) Study subjects were patients with gastric adenoma or carcinoma of esophagogastric junction. (III) Reviews, abstracts, letters, etc. (IV) Repeated reports with the same group of people; studies with poor quality and little information, and the OR and its 95% CI could not be obtained. (V) Newcastle-Ottawa Scale (NOS) score <6.

Meta-analysis was carried out using Stata 15.0 software. The OR and 95% CI were calculated as effect sizes to represent the results. Q test was applied to examine the heterogeneity of each research result. I2≥50%, or P≤0.05 indicated heterogeneity, so the random effect model (REM) was adopted; otherwise, fixed effect model (FEM) was used. Z test was used for the significance test of the pooled OR. In this meta-analysis, funnel plot was used to assess the publication bias of included literature. The funnel plot uses the standard error of each research log (OR) to make a graph of its OR. If the funnel plot was asymmetric, there may be publication bias, and then Egger’s test was applied to examine publication bias. Eventually, sensitivity analysis was conducted to assess the robustness of the results.

The databases were searched comprehensively, and the results were cross-checked. After reading, the searched studies were screened strictly in line with the inclusion and exclusion criteria and quality requirements. Ultimately, 17 studies (8-10,12-25) were included in this meta-analysis. The specific screening process was shown in Figure 1. The basic characteristics of the included literature were shown in Table 1. A total of 4,424 gastric cancer patients were included, including 1,268 positive cases (28.66%). 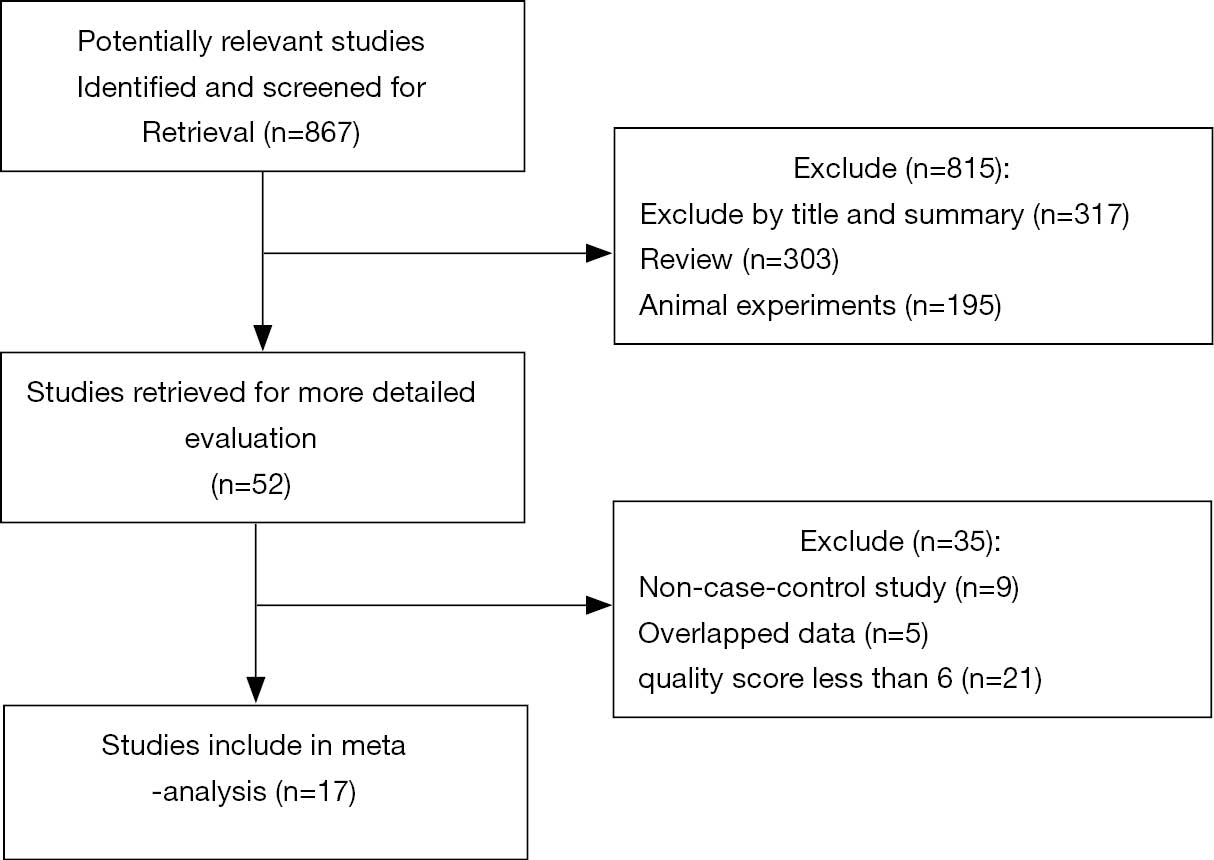 Figure 1 A flow diagram of the literature screening process. 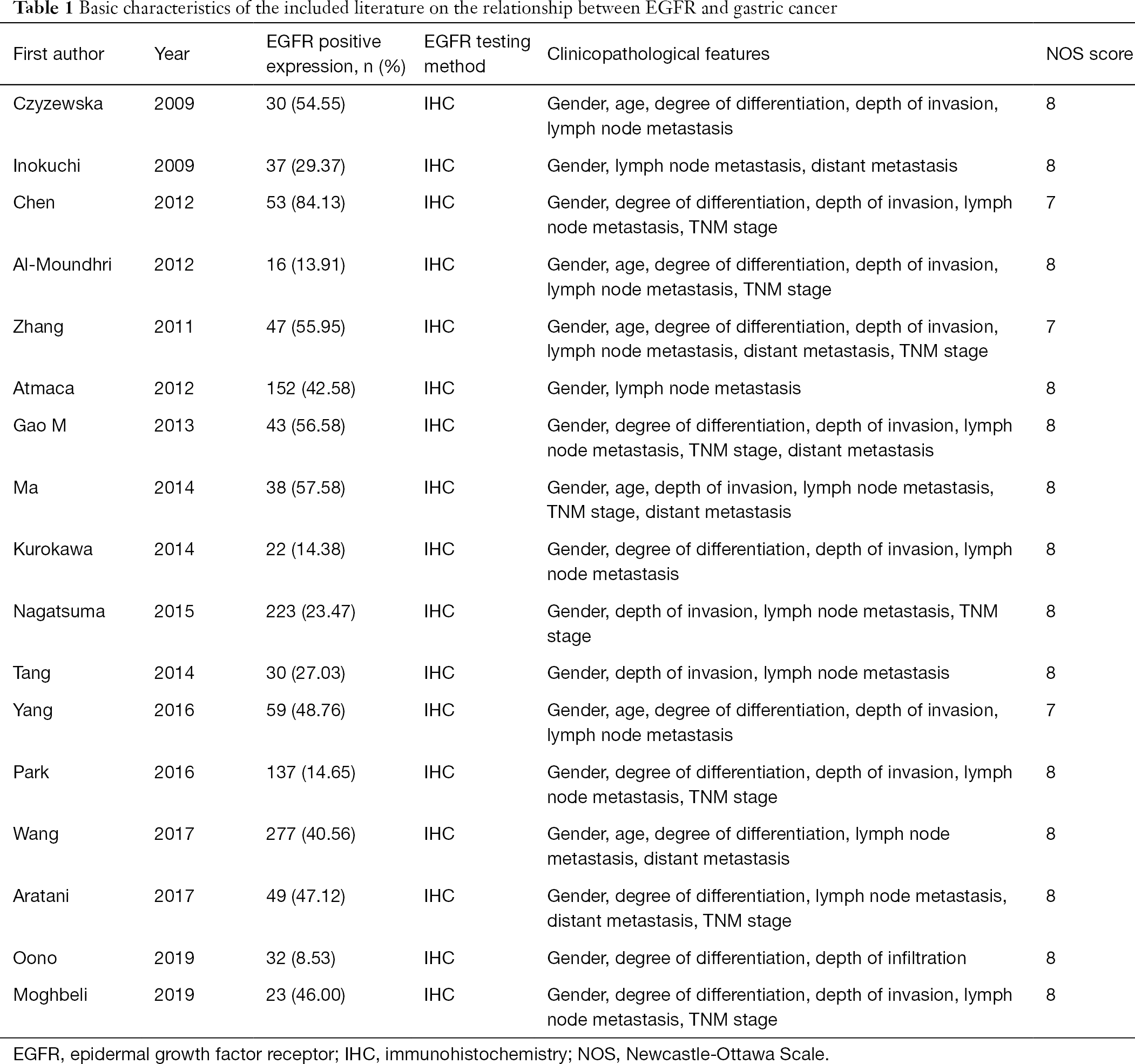 Relationship between EGFR overexpression and clinicopathological characteristics of gastric cancer

Relationship between EGFR overexpression and the depth of invasion

A total of 17 literature on EGFR overexpression and depth of invasion was included, including 1,975 cases with extraserosal invasion and 1,271 cases with subserosal invasion. The heterogeneity among the studies was significant (I2=73.3%), so REM was adopted (Table 2). The difference between the two groups was statistically significant, with subserosal invasion cases as the control group (OR =3.26, 95% CI: 1.95–5.44, P<0.001) (Figure 2A). The result indicated that with the enhancement of EGFR expression, the deeper the depth of invasion of gastric cancer. 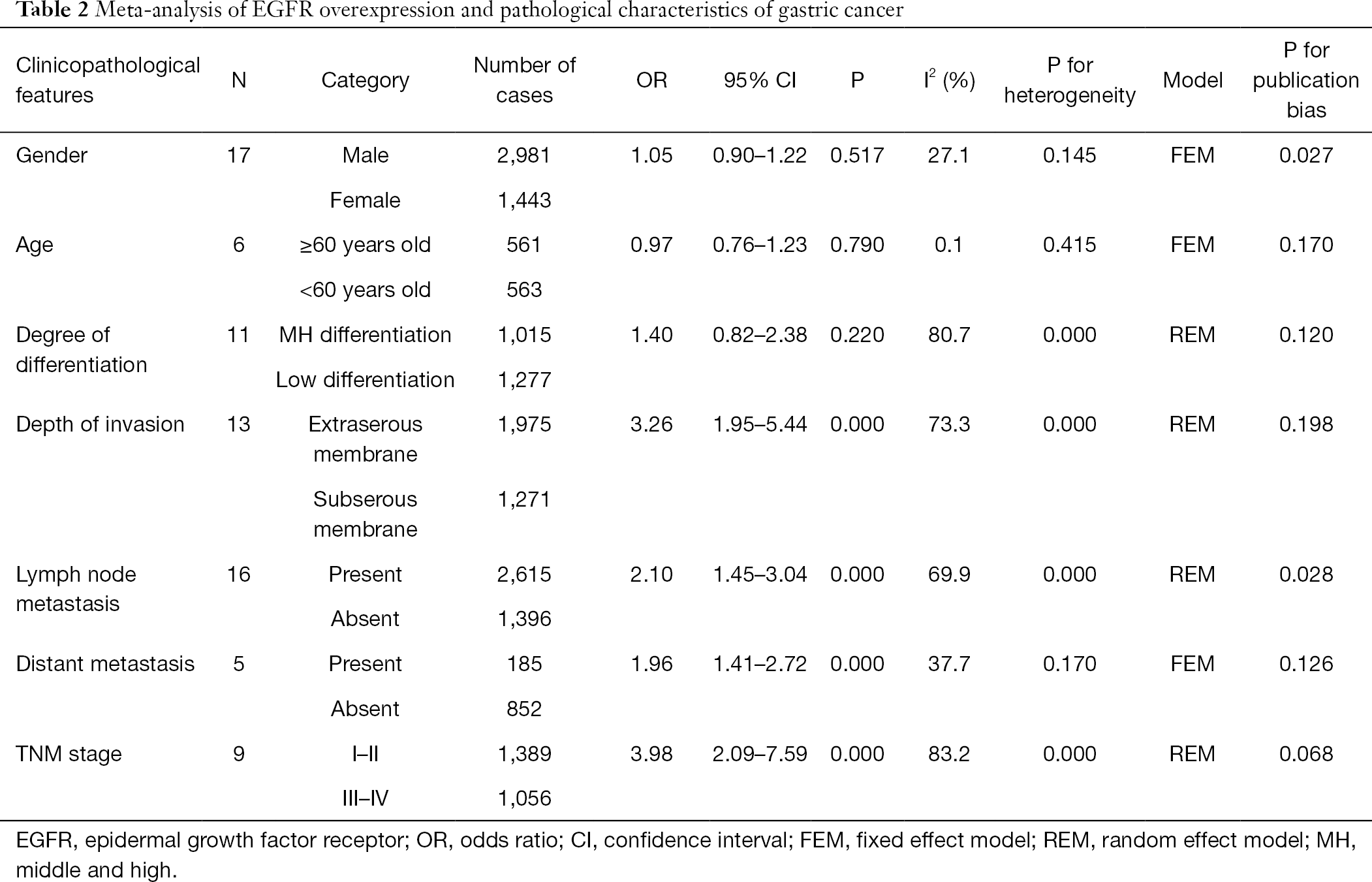 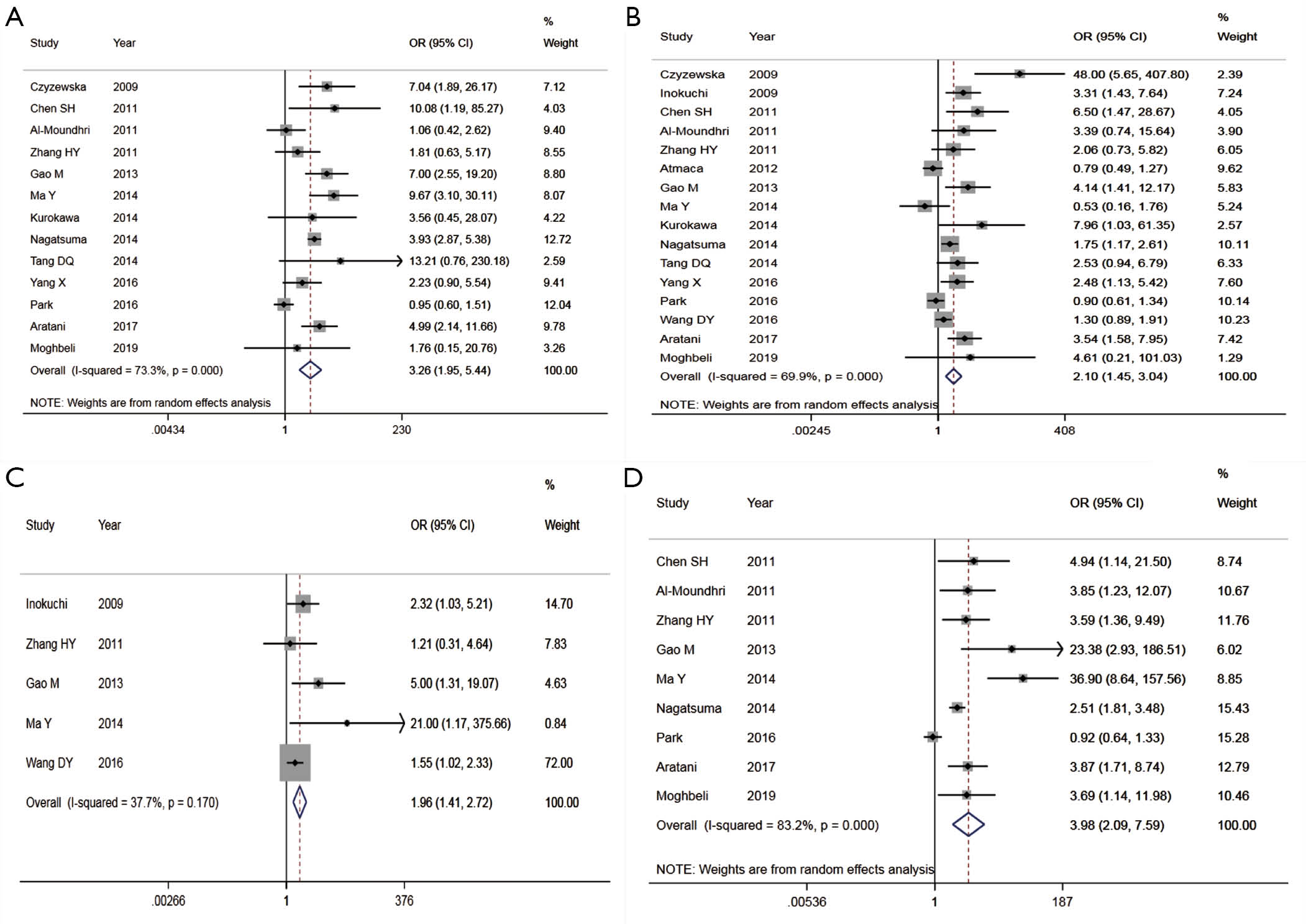 Relationship between EGFR overexpression and gender, age and degree of differentiation 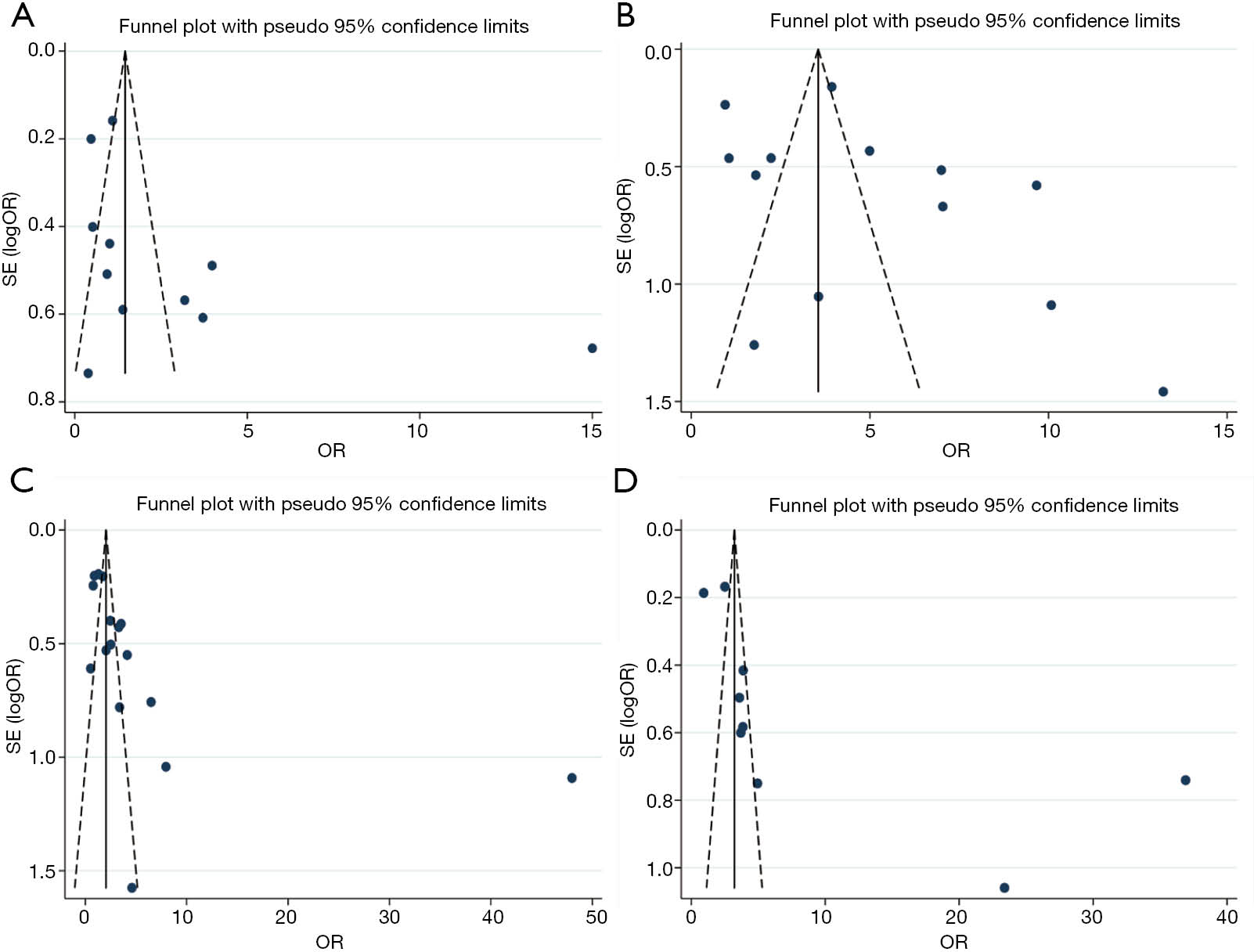 As shown in Figure 4, after removing a single study in turn, there was no statistically significant change in the meta-analysis outcome of the research indicators such as differentiation degree, depth of invasion, lymph node metastasis, distant metastasis and TNM staging. This showed that the results of this study were robust. 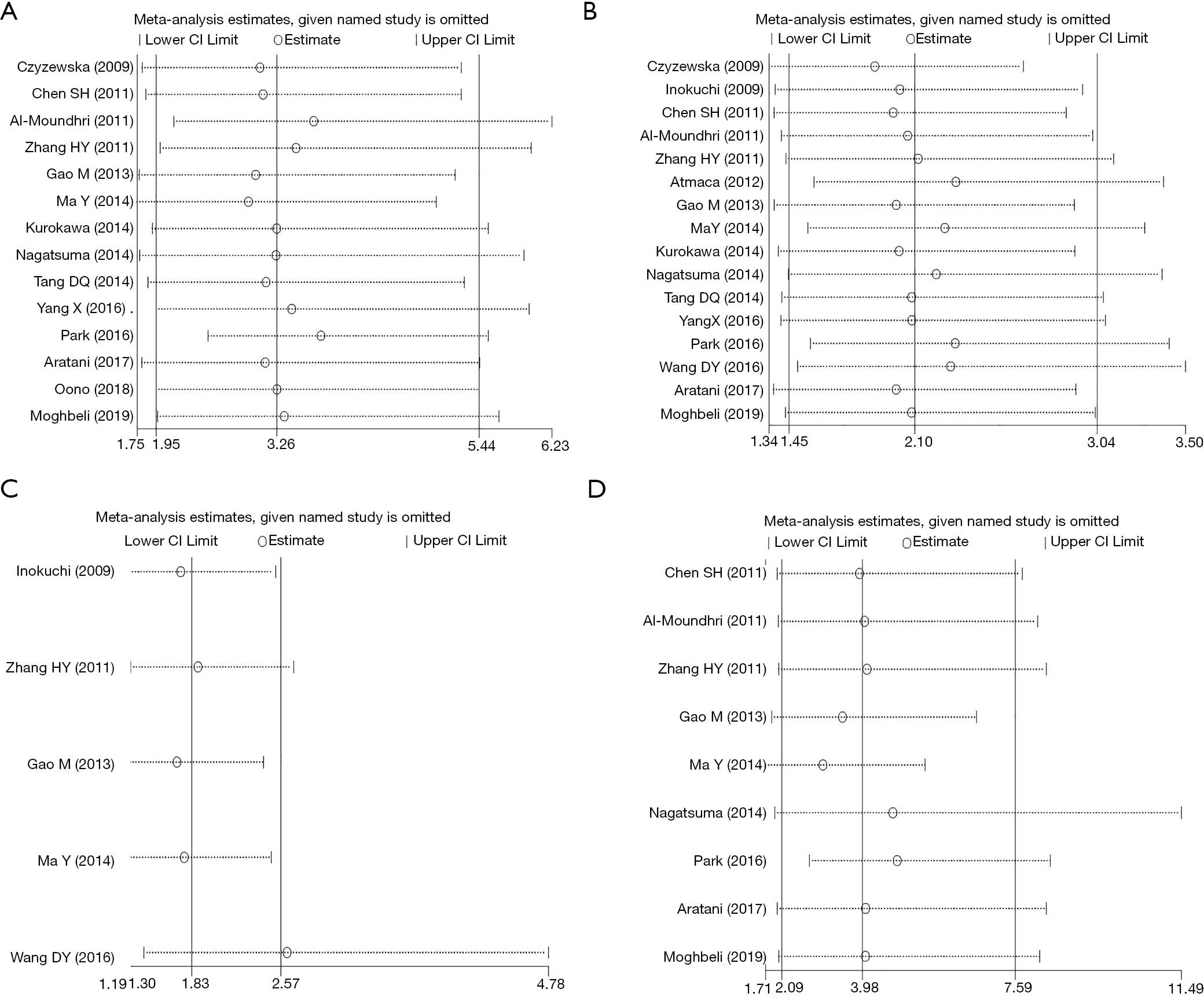 At present, surgery, radiotherapy and chemotherapy are the main treatment methods for gastric cancer. Although great progress has been made in the diagnosis and treatment of gastric cancer, its morbidity and mortality are still relatively high. EGFR belongs to tyrosine kinase type I receptor family. Members of this family not only act as receptors, but also can convert extracellular signals into intracellular effects (26), which play an important role in tumor progression. EGFR regulates cell proliferation, induces and promotes tumor growth by activating MAPK/ERK, EGFR-STAT3, PI3K-Akt and other pathways, which is closely related to the occurrence of more than 33% epidermal tumors (27). In the 21st century, the research on clinical transformation of targeted drugs is developing rapidly and targeted therapy is critical in the comprehensive treatment of multiple advanced solid tumors. EGFR is also the most important target molecule discovered so far (28,29). A large number of studies have confirmed that EGFR is overexpressed in head and neck tumors, breast cancer, non-small cell lung cancer, colorectal cancer, ovarian cancer and other tumors, which are closely related to tumor cell proliferation, invasion, metastasis, vascular growth and apoptosis (30-34). Therefore, EGFR has gradually become one of the main targets for tumor therapy today. However, through searching the relevant domestic and foreign literature in the past 10 years, the studies on the EGFR expression and the clinical characteristics are still lack of large samples of clinical and pathological data, and the conclusions are inconsistent. According to the inclusion and exclusion criteria, 17 high-quality literature (NOS score ≥6) is included in this meta-analysis. It provided more comprehensive data to explore the relationship between EGFR overexpression and clinicopathological characteristics of gastric cancer.

A total of 17 articles were included in this meta-analysis, including 4,424 gastric cancer patients, and the overall positive rate of EGFR was 28.66%. The results showed that EGFR overexpression was correlated with depth of invasion, lymph node metastasis, distant metastasis and TNM staging of gastric cancer, that is, it had predictive value for the above indicators, while EGFR overexpression had no relation with differentiation degree, age and gender. In term of heterogeneity, there is no significant heterogeneity in age, gender and distant metastasis, while there is some heterogeneity in differentiation degree, infiltration depth, lymph node metastasis and TNM staging. In term of publication bias, gender and lymph node metastasis have certain publication bias, and other indicators have no obvious publication bias. Sensitivity analysis results showed that after removing a single study in turn, there was no statistically significant change in the results of meta-analysis on the research indicators such as infiltration depth, lymph node metastasis, distant metastasis and TNM staging of gastric cancer, which indicated that the results were stable. This indicated that the conclusions of this meta-analysis were relatively reliable. Meta-analysis by Zhang et al. (37) showed that EGFR overexpression was correlated with differentiation degree, but not with depth of invasion. The result of Zhang was not very consistent with our conclusions. In this meta-analysis, EGFR overexpression was not related to the degree of differentiation, but to depth of invasion, which was also confirmed by sensitivity analysis. This result may be related to the inclusion of more high-quality literature in our study. In addition, EGFR overexpression was also confirmed to be associated with distant metastasis.

This study also has some limitations. (I) The scoring criteria of IHC for EGFR expression detection are different among the studies; and there are certain subjectivity and inconsistency in judging the positive expression among different researchers. The above factors may lead to potential bias and thus affect the accuracy of the results. (II) There is a certain publication bias in gender and lymph node metastasis. (III) The degree of differentiation, infiltration depth, lymph node metastasis and TNM staging have certain heterogeneity, which may be related to race or gastric cancer staging. (IV) Although IHC is applied to detect the EGFR expression in all included studies, the antibody manufacturers, dilution concentrations and judgement criteria are not completely consistent, thus affecting the results of meta-analysis. (V) The number of included studies is limited and may not cover all relevant studies comprehensively.

In conclusion, the results of this study reveal that the high expression of EGFR in gastric cancer tissues is correlated with the depth of invasion, lymph node metastasis, distant metastasis and TNM staging of gastric cancer. Therefore, we hypothesize that anti-EGFR targeted therapy combined with radiotherapy and chemotherapy is likely to achieve certain results in the comprehensive treatment of gastric cancer. Of course, because this study still has certain limitations and is not consistent with meta-analysis published in the past, more clinical researches are required and the prognosis should be observed, so as to make a more in-depth and comprehensive study on the effect of EGFR overexpression on gastric cancer and to provide more sufficient theoretical basis for the application of anti-EGFR targeted therapy in gastric cancer.

Funding: Study on the molecular mechanism of the relationship between insulin and insulin-like growth factor in diabetic patients (201907d07050010).

Reporting Checklist: The authors have completed the PRISMA reporting checklist. Available at http://dx.doi.org/10.21037/tcr-20-2035

Conflicts of Interests: Both authors have completed the ICMJE uniform disclosure form (available at http://dx.doi.org/10.21037/tcr-20-2035). The authors have no conflicts of interest to declare.