MicroRNAs (miRNAs) are considered important tumor regulators and have been reported as oncogenes or tumor suppressor genes in the occurrence and development of cervical cancer by influencing cell biologic function (5,6).

We present the following article in accordance with the MDAR reporting checklist (available at http://dx.doi.org/10.21037/tcr-20-2913).

Total RNA was extracted with TRIzol reagent; cDNA was synthesized using a reverse transcription kit according to the manufacturer’s instruction. The Applied Biosystems 7500 Real-Time PCR System was used for the real-time PCR. The reaction conditions were as follows: pre-denaturation at 95 °C for 3 minutes, denaturation at 95 °C for 40 seconds, annealing at 56 °C for 30 seconds, and extending for 30 seconds at 72 °C for 40 cycles. Using GAPDH or U6 as the internal reference, HPV16 E6 mRNA and miR-504 relative expression levels in SiHa cells were calculated by 2–△Ct method. The experiment was repeated three times. The primer sequences are shown in Table 1.

Cell lysates were collected 48 hours after transfection, and the protein concentration was determined by BCA method. The protein sample was boiled for 5 minutes in a water bath. The denatured protein was separated by SDS-PAGE and transferred to polyvinylidene difluoride (PVDF) membrane. After blocking with 5% skimmed milk powder for 2 hours at room temperature, the membrane was incubated with the primary antibody (1:500) overnight at 4 °C. After washing with phosphate-buffered saline containing 0.05% Tween-20 (PBST) three times, the membrane was incubated with t horseradish peroxidase-labeled secondary antibody (1:2,000) at 37 °C for 1 hour. After washing with PBST three times, the membranes were developed with the chemiluminescent agent. The expression level of the protein was detected using a gel imaging analysis system (Gel Doc XR+; Bio-Rad). The experiment was repeated three times.

Matrigel matrix gel (50 mg/L), diluted at a ratio of 1:8, was spread onto the upper surface of the membrane and dried at 4 °C. SiHa cell suspensions (1×105 cells/mL) were added into the upper chamber, with 100 µL/well and 600 µL medium containing 10% FBS added into the lower chamber. After 24 hours of culture, the cells were removed and fixed with4% paraformaldehyde. The cells were dyed with 0.5% crystal violet. After washing, the number of cells penetrating the membrane was observed and counted under a light microscope. The results were expressed by the mean number of cells randomly selected in five visual fields. The experiment was repeated three times.

SiHa cells in each group were collected into a centrifuge tube; each sample contained 1×106 cells. The medium was discarded after centrifugation at 800 ×g/minute for 5 minutes. The cells were then washed twice with phosphate-buffered saline (PBS); 200 µL PBS was added, and the cells were resuspended in the mixture. A total of5 µL annexin V-FITC and 5 µL PI were added to the cells and incubated at room temperature for 15 minutes under dark conditions. The apoptotic rate of SiHa cells was detected by using a flow cytometer (FACSC alibur; BD Biosciences). The experiment was repeated three times. 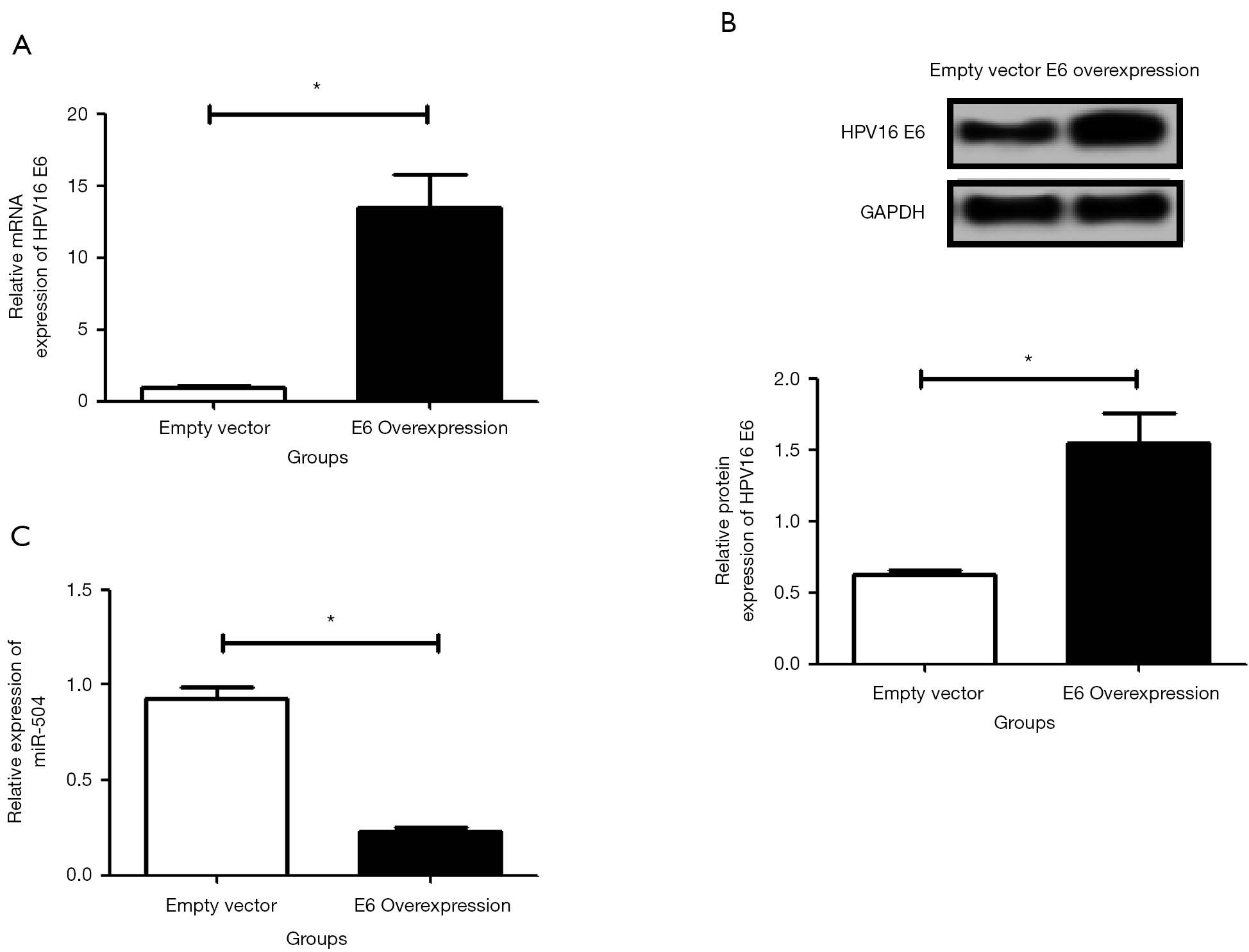 Expression of miR-504 in SiHa cells of each group 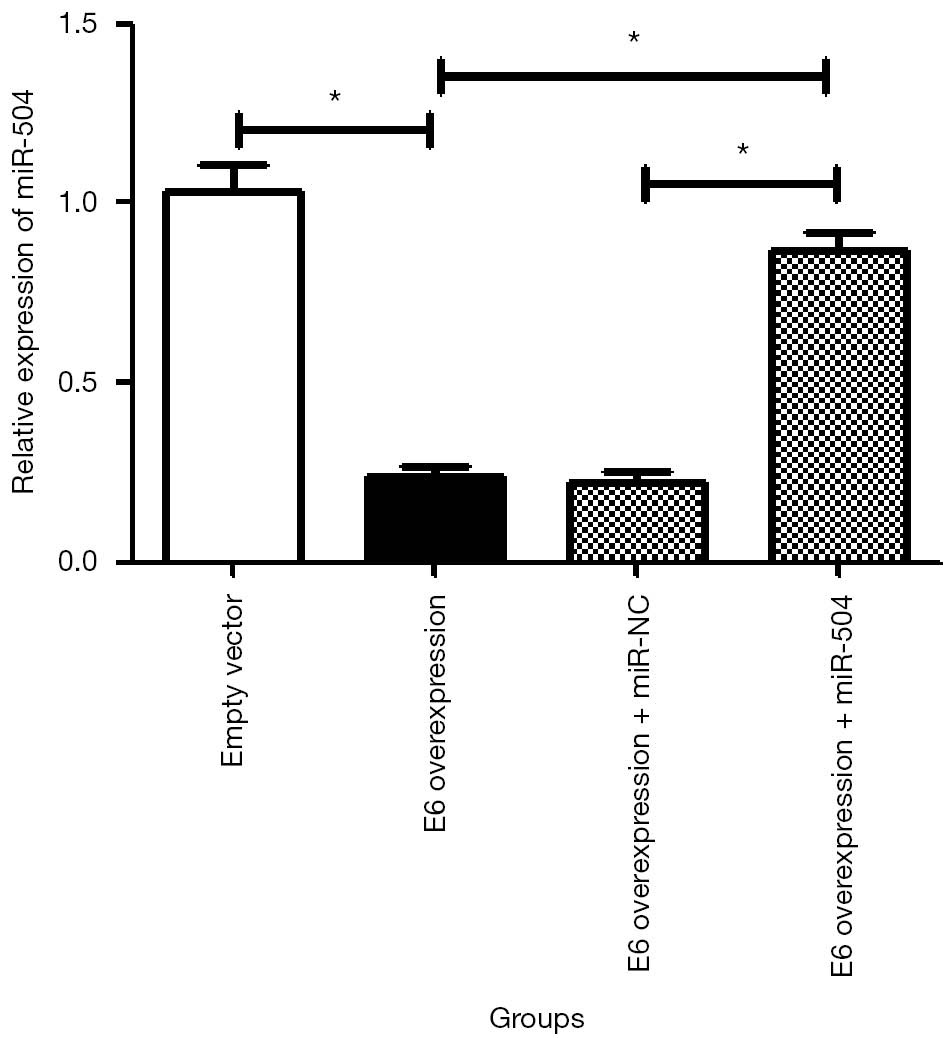 Table 2 Proliferation of SiHa cells in each group
Full table 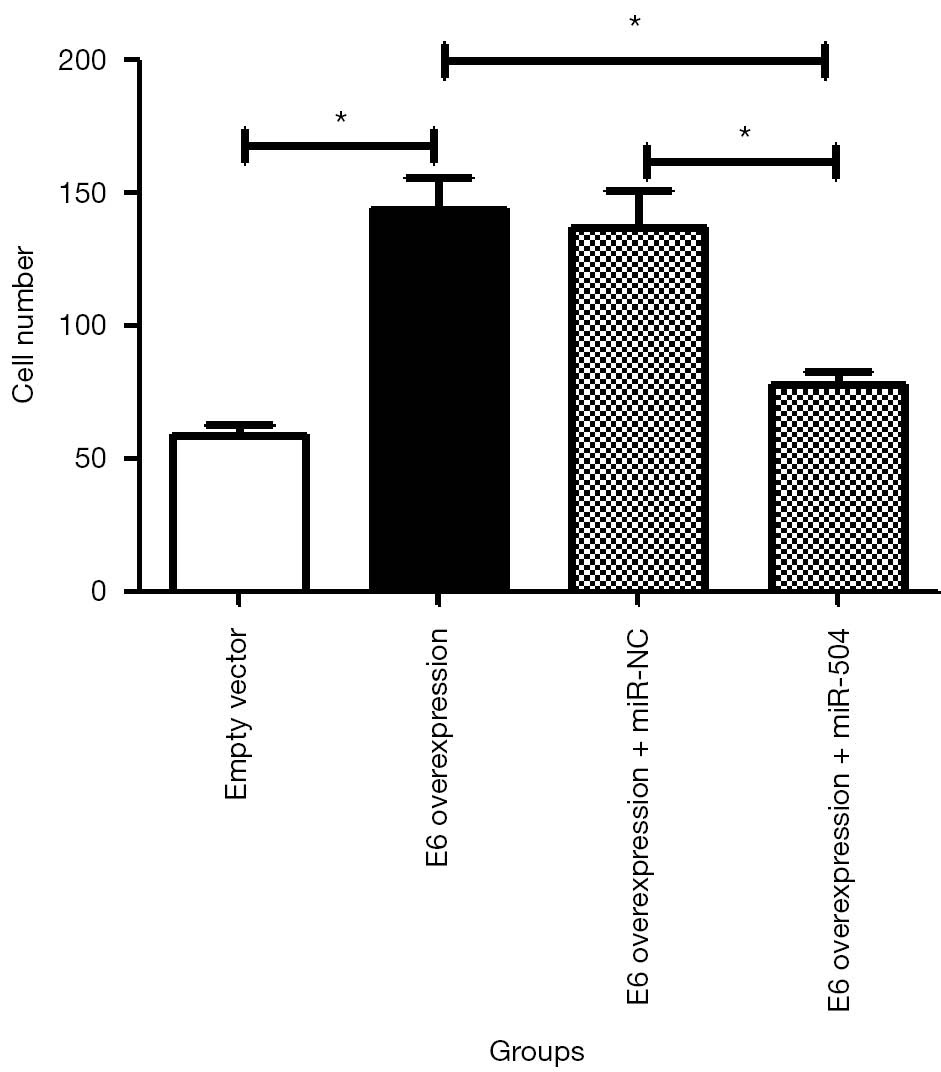 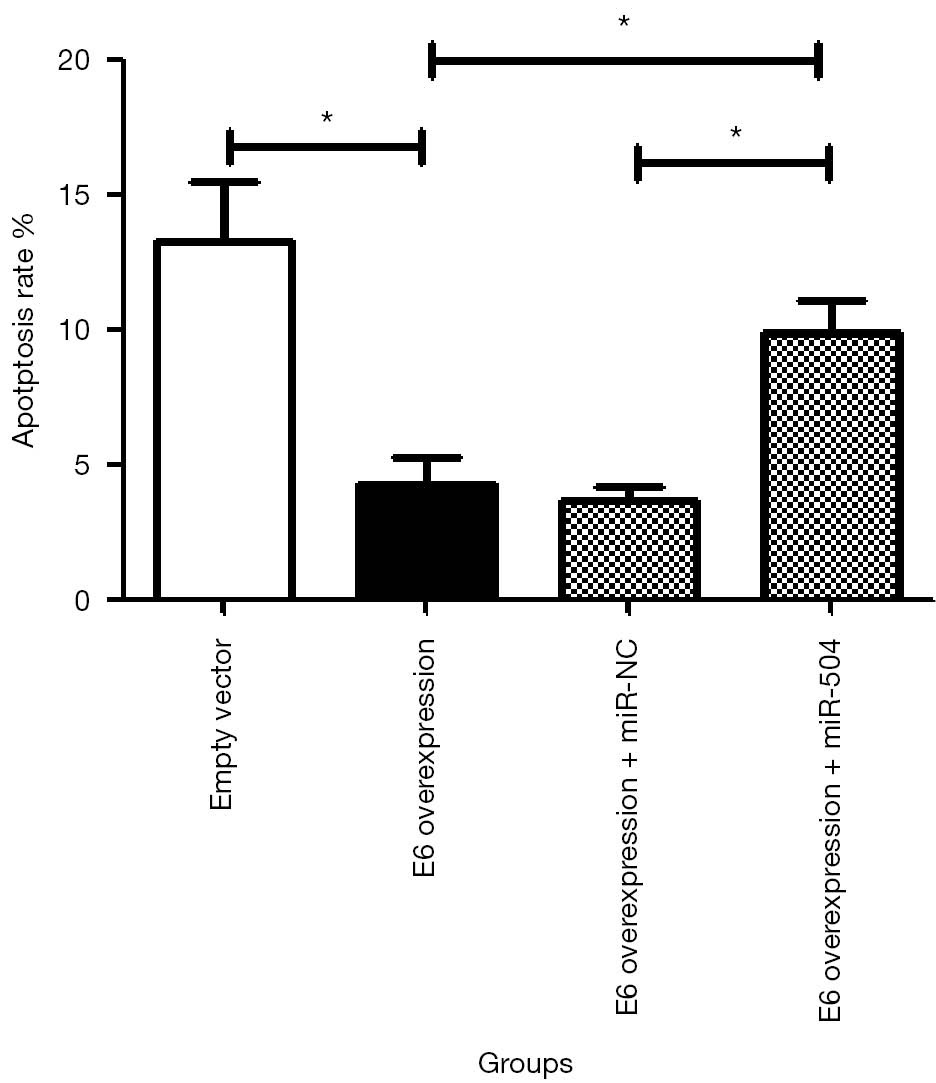 The HPV16 E6 gene is located at position 83-559 of the HPV16 genome and contains 477 nucleotides. The E6 protein is encoded by the E region gene and consists of 151 amino acids and two zinc finger structures. It can degrade p53 by binding to E6-related proteins, and plays an important role in cell cycle, apoptosis, and malignant phenotype transformation (12). HPV16 E6 can promote the occurrence and development of cervical cancer by regulating the function of tumor cells. Previously published studies have found that HPV16 E6 is highly expressed in cervical cancer, and its expression level is closely related to the grade of cervical lesions (13). HPV16 E6 can induce cancer cell proliferation and inhibit cell apoptosis by upregulating MIF expression (14). HPV16 E6 promotes the migration and invasion of cervical cancer cells by downregulating the expression of NHERF1 (15). In the present study, we found that the overexpression of HPV16 E6 significantly enhanced the proliferation and invasion of SiHa cells, whereas apoptosis was significantly reduced. The results are consistent with those of previous studies (14-16), and further verify that HPV16 E6 can promote proliferation and invasion, and inhibit apoptosis, in cervical cancer cells.

miRNAs are a class of endogenous non-coding RNAs that can regulate gene expression by inhibiting target gene transcription or protein translation; they affect cell proliferation, invasion, and apoptosis, as well as other biologic processes. miRNAs are closely related to the occurrence and development of many tumors, including HPV-related tumors. HPV infection is an important carcinogenic mechanism by regulating the expression of various miRNAs. Zang et al. reported that miR-125b has a low expression in HPV16 E6(+) esophageal cancer tissues, and is negatively correlated with HPV16 E6 expression (16). HPV16 E6 overexpression could activate the Wnt/β-catenin signaling pathway by reducing the expression of miR-125b in esophageal cancer cells, and promote the occurrence of esophageal cancer. Hufbauer et al. found that miR-3194-5p and miR-1281 were upregulated in HPV16 E6(+) oropharyngeal squamous cell carcinoma (17). HPV16 E6 could increase the number of transitional cancer stem cells by regulating the expression of miR-3194-5p and miR-1281. There are also miRNAs closely related to HPV16 infection in cervical cancer. The expression level of miR-34a in cervical cancer was found to be related to HPV16 infection; miR-34a could be used to evaluate and predict the prognosis of HPV infection (18). Peta et al. noted that miR-146a-5p was downregulated in HPV16 E6(+) cervical cancer, whereas HPV16 E6 could upregulate KMD2b expression by regulating the c-myc/miR-146a-5p axis and promote the proliferation and migration of cervical cancer cells (19).

miR-504 is closely related to tumorigenesis and development. It has been reported that miR-504 is abnormally expressed in non-small cell lung cancer, glioma, and breast cancer, and acts as an oncogene or tumor suppressor gene by regulating cell biologic function (20-22). In a previously published study, the expression of miR-504 was found to be downregulated in cervical cancer and related to HPV infection; however, the relationship between HPV16 E6 and miR-504 and the role of miR-504 in cervical cancer were not clear (11). In the present study, we found that the overexpression of HPV16 can downregulate the expression of miR-504 in SiHa cells, indicating that miR-504 may play an important role in the development of cervical cancer induced by HPV16 E6. In addition, transfection with the miR-504 mimic can reverse the role of HPV16 E6 on the proliferation, invasion, and apoptosis of SiHa cells. The results indicate that miR-504 could inhibit proliferation and invasion, and induce apoptosis, of SiHa cells. HPV16 E6 could promote the malignant development of SiHa cells by downregulating the expression of miR-504.

However, there are some limitations in the current study. Firstly, the in vivo experiments are lacking, which will be conducted in the next research work. Secondly, the in-depth mechanism has not been elusive, which is more meaningful.

In conclusion, HPV16 E6 can promote the proliferation and invasion, and inhibit the apoptosis, of SiHa cells by downregulating the expression of miR-504. The role of HPV16 E6 on the development of cervical cancer in vitro was discussed; however, further research is required to further verify this finding in animal experiments, which will help elucidate the carcinogenic mechanism of HPV16 E6 in cervical cancer.

Funding: The present study was supported by the Jiangsu Provincial Medical Youth Talent (No. QNRC2016303), the Science and Technology Development of Nanjing Medical University (No. 2017NJMUZD045), and the Medical Scientific Research Projects of the Health and Family Planning Commission in Jiangsu Province (H2018018).

Reporting Checklist: The authors have completed the MDAR reporting checklist. Available at http://dx.doi.org/10.21037/tcr-20-2913

Conflicts of Interest: All authors have completed the ICMJE uniform disclosure form (available at http://dx.doi.org/10.21037/tcr-20-2913). The authors have no conflicts of interest to declare.