Glioma is the most common type of intracranial tumors characterized by invasive growth and aggressive metastasis capabilities (1). Based on the classification of the World Health Organization (WHO), glioma is divided into grade I to grade IV (1,2). The brain glioma is considered as one of the most malignant tumors because of its resistance to chemotherapy and radiotherapy as well as the subsequent relapse. The detailed molecular mechanisms responsible for glioma initiation and progression are not fully elucidated, it is generally accepted that uncontrolled growth and migration of tumor cells contribute to glioma malignancy (3).

MiR-30c, belonging to the miR-30 family, has been shown to be involved in a variety of tumors (9-11). In breast cancer, miR-30c serves as an independent predictor of endocrine therapy in advanced estrogen receptor (ER) positive cases (12,13). Moreover, aberrant miR-30c expression changes the expressions of EMT markers and lead to the suppression of epithelial mesenchymal transition (EMT) (14). A recent study has confirmed that miR-30c-5p suppresses migration, invasion and EMT by targeting MTA1 in gastric cancer (15). In glioma cells, high expression levels of miR-21 and -30b/c are reported to maintain the tumor necrosis factor-related apoptosis-inducing ligand (TRAIL)-resistant phenotype (16). The aforementioned studies suggest the critical role of miR-30c-5p in human cancers, including glioma. However, the effect of miR-30c on glioma progression and its underlying mechanism still needs further investigation. In the present study, we explored the role of miR-30c-5p in growth, apoptosis, migration of glioma cells, aiming to identify novel therapeutic target for treatment of glioma. We present the following article in accordance with the MDAR reporting checklist (available at http://dx.doi.org/10.21037/tcr-19-2957).

Twenty paired human glioma specimens and the adjacent normal tissues were obtained from Department of Neurosurgery, the Second Affiliated Hospital of Soochow University. All samples were obtained at the time of surgery and immediately stored in liquid nitrogen until use. The study was conducted in accordance with the Declaration of Helsinki (as revised in 2013). This study was approved by the Ethics Committee of the Second Affiliated Hospital of Soochow University [No. JD-LK-2018-027-02], and all participants provided written informed consent.

The glioma cell line U251 and U87 were purchased from ATCC. These cell lines were cultured in Dulbecco’s Modified Eagle Medium (Gibco, USA) supplemented with 10% FBS (Gibco, USA) and 1% penicillin/streptomycin (Sigma, USA) and maintained at 37 °C in an atmosphere of 5% CO2.

Glioma cells were seeded in 96-well culture plates (5,000 cells/well) and cultured for 1, 2, or 3 days. 20 µL of MTT (Sigma) was added and the cells were incubated at 37 °C for 4 hours. Then, the supernatants were removed and 150 µL of DMSO was added. Ten minutes after shaking slowly, the optical density (OD) value was determined at 570 nm.

Glioma cells were seeded in medium mixed with soft agar, and cultured in the incubator for four weeks. Colonies were stained with crystal violet and the number of colonies was calculated.

Glioma cells were collected, washed twice with PBS and fixed in 80% ice-cold ethanol in PBS. Then, cells were re-suspended in the staining solution containing FITC-conjugated annexin V antibody and propidium iodide (BD Bioscience). Apoptotic cells were detected on a flow cytometer after incubation for 15 min at room temperature in the dark.

Glioma cells were cultured on the top of Matrigel-coated invasion chambers (BD Bioscience) according to the manufacturer’s instruction. After incubating at 37 °C for 30 min, the cells in the lower surface of the membrane were fixed in methanol and stained with crystal violet. The invasive cells were counted under an inverted microscope.

Glioma cells were collected, lysed in RIRA lysis buffer, and subject to centrifugation at 12,000 rpm for 10 min. Protein lysates were separated by denaturing sodium dodecyl sulfate-polyacrylamide gels and transferred to nitrocellulose membranes (Bio-Rad Laboratories, Hercules, CA). The membranes were probed with the anti-Bcl2 antibody antibodies: (1:5,000, Cell Signaling Technology) and then the secondary antibody labeled by horseradish peroxidase. The protein expression was detected by using the ECL chemiluminescent reagent kit (Amersham GE Healthcare).

The region that contained interacted sites of BCL2 was amplified by PCR from human genomic DNA and inserted into the psiCHECK-2 vector (wild-type) (Promega, Madison, Wisconsin) using the following primers: psiCHECK2-BCL2-F: 5'-CGAGCTCGCTGAATTCTAAATACTGTTAAGGATCTAAGGACAAGCTTG-3'; psiCHECK2-BCL2-R: 5'-CAAGCTTGTCCTTAGATCCTTAACAGTTTTAGAATTCAGCGAGCTCG-3'; psiCHECK2-BCL2-Mut-F: 5'-CGAGCTCGCTGAATTCTAAATATGTTTGAGGATCTAAGGACAAGCTTG-3'; psiCHECK2-BCL2-Mut-R: 5'-CAAGCTTGTCCTTAGATCCTATGTGTGTTTAGAATTCAGCGAGCTCG-3'. U87 was plated in 96-well dishes and co-transfected with wild-type or mutant with Lipofectamine 2000. Twenty-four hours later, the cells were lysed and the luciferase activities were measured using dual-luciferase assays (Promega). 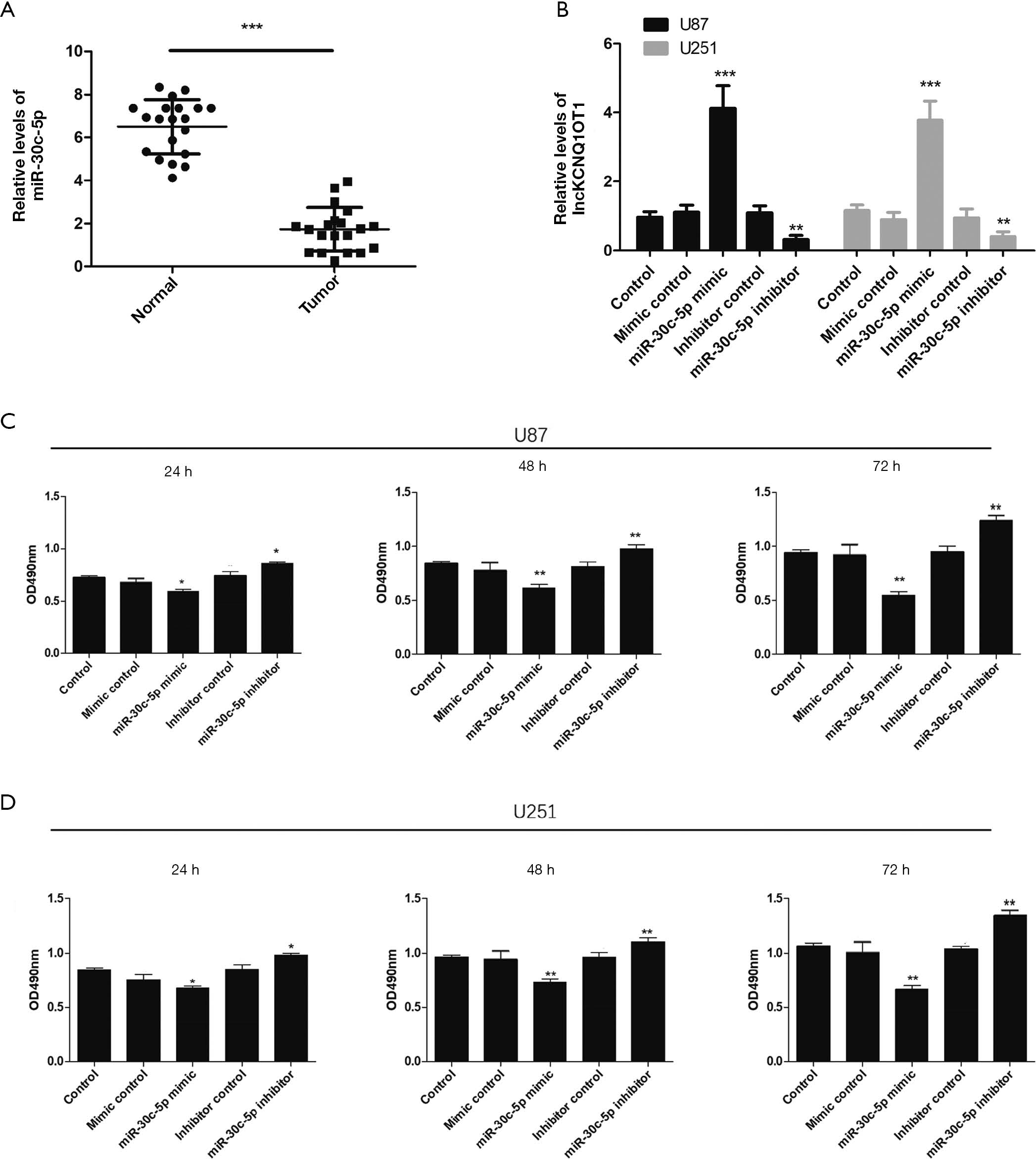 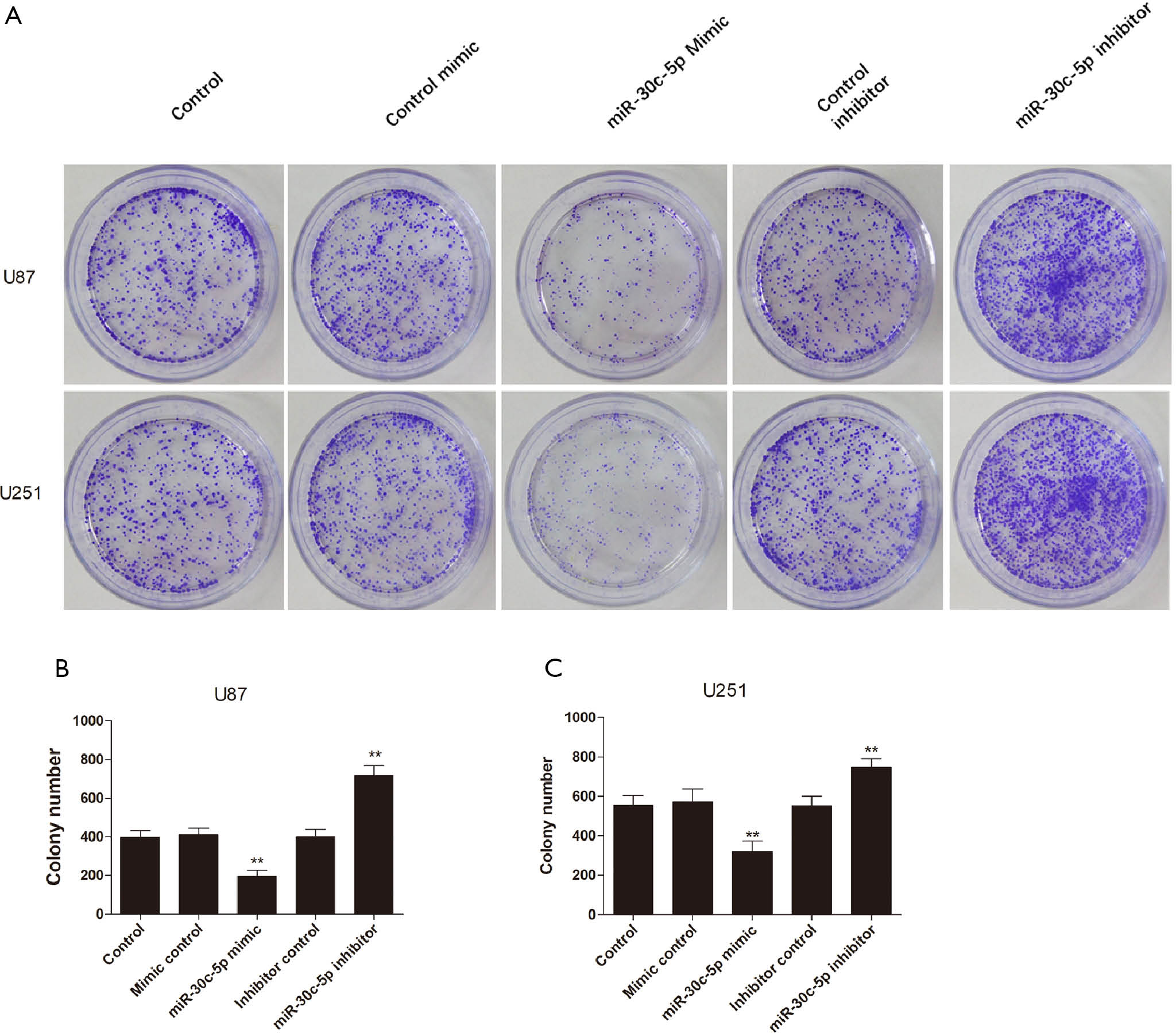 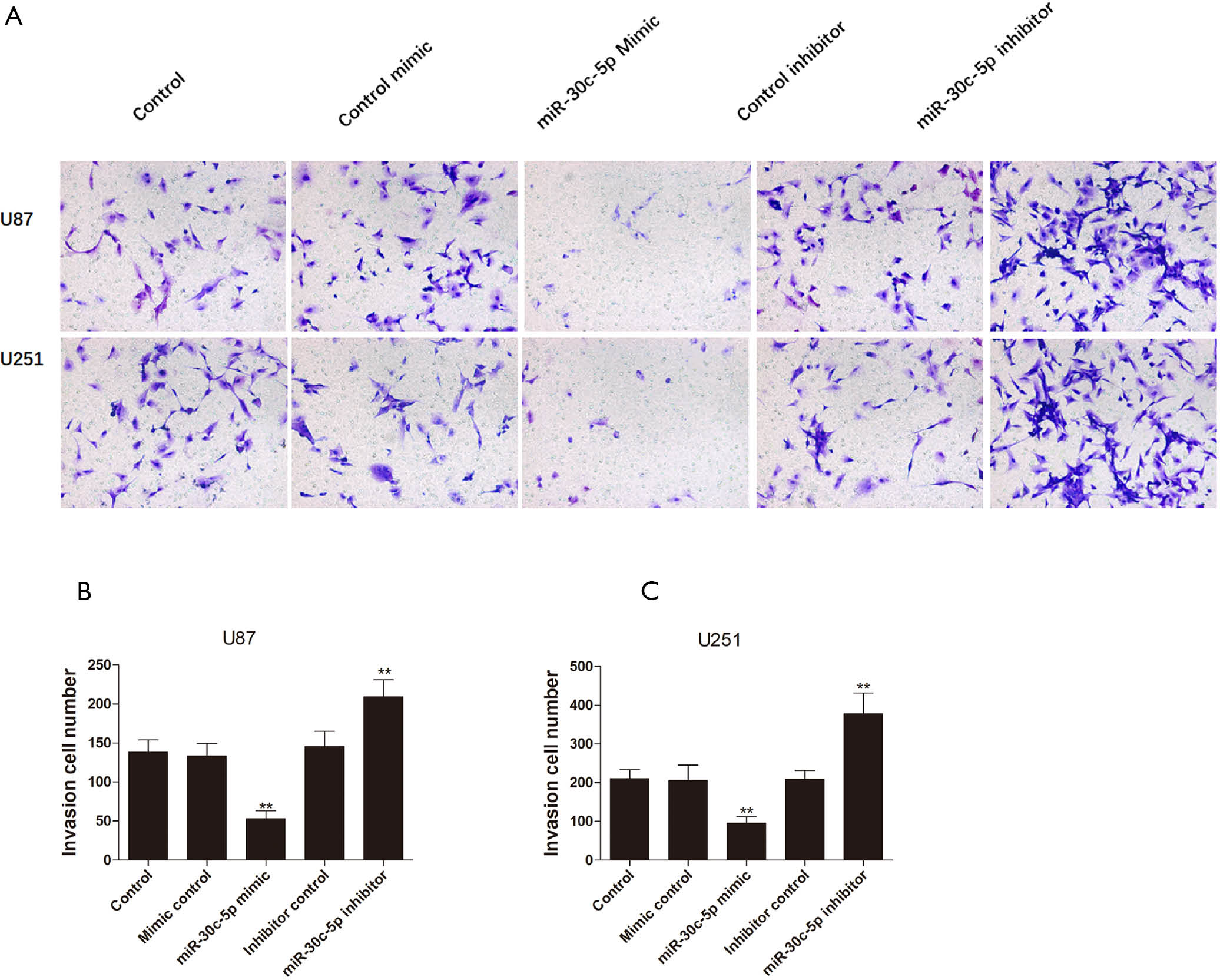 Bioinformatics software was used to identify the potential target genes of miR-30c-5p. Consequently, the 3’UTR of Bcl2 gene was found to contain the conserved regions that may serve as binding sites for miR-30c-5p (Figure 5A). In addition, we found that miR-30c-5p overexpression significantly decreased the expression of Bcl2, and transfection with miR-30c-5p inhibitor increased the protein levels of Bcl2 in U87 and U251 cells (Figure 5B). To further verify that Bcl2 is a potential target of miR-30c-5p, we generated luciferase reporters that contained the 3'UTR or a mutated sequence within the biding site of the Bcl2 gene. As a result, the reporter activity of wild-type Bcl2-3'UTR was reduced but the luciferase activity of mutated Bcl2-3'UTR remained unchanged in miR-30c-5p mimic-transfected cells (Figure 5C). Given that Bcl2 and caspase pathways are involved in apoptosis, we evaluated the expression of caspase-3/8/9 in glioma cells. Data showed that overexpression of miR-30c-5p in U87 cells dramatically led to caspase 3/9 activation, as evidenced by elevated cleaved caspase 3/9; whereas knockdown of miR-30c-5p decreased levels of cleaved caspase 3/9 (Figure 5D). However, the expression of caspase 3, 8 and 9 remained unchanged in U87 cells treated with miR-30c-5p inhibitor or mimic. Collectively, these findings confirm that miR-30c-5p targets Bcl2 and activates caspase pathway in glioma cells. 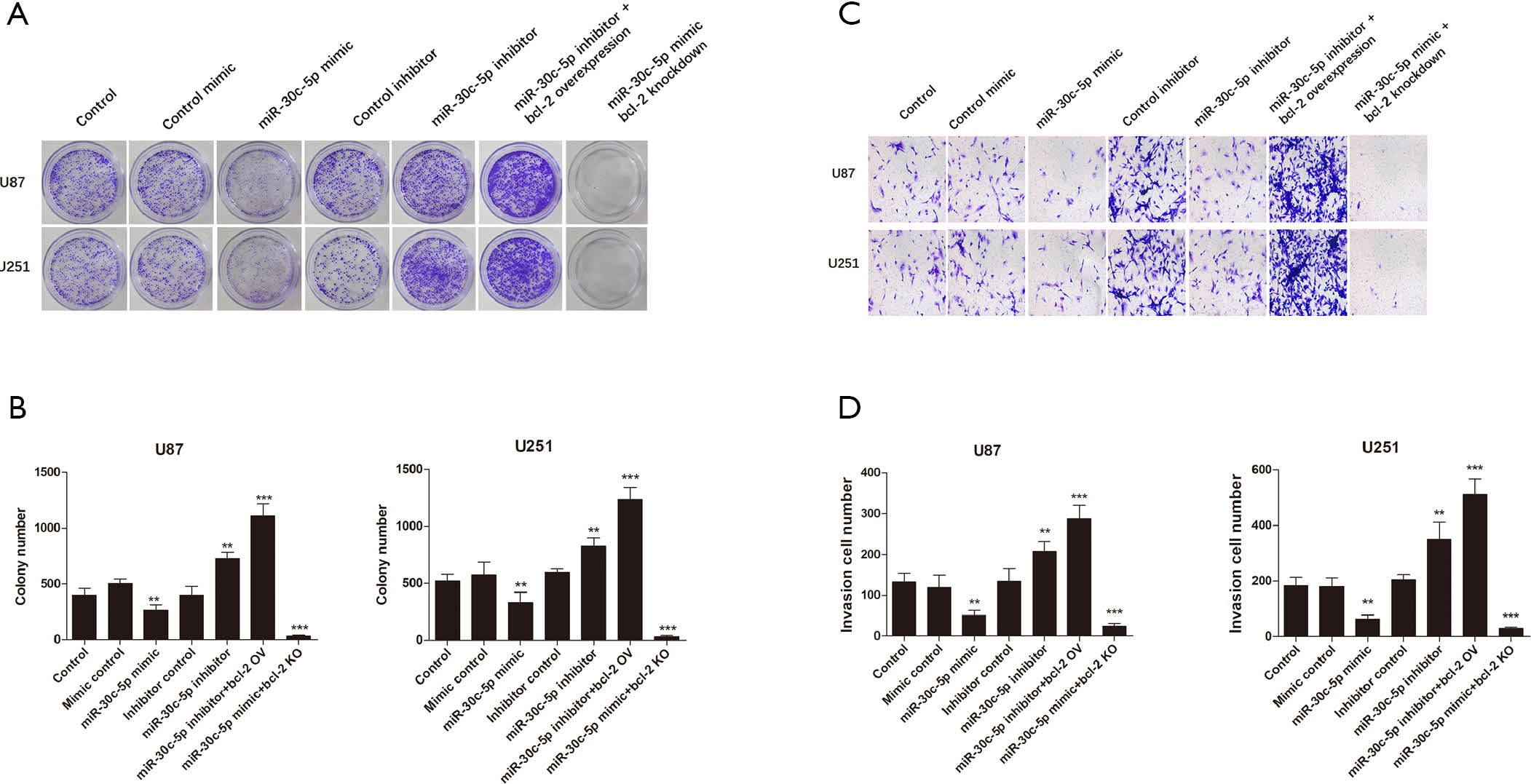 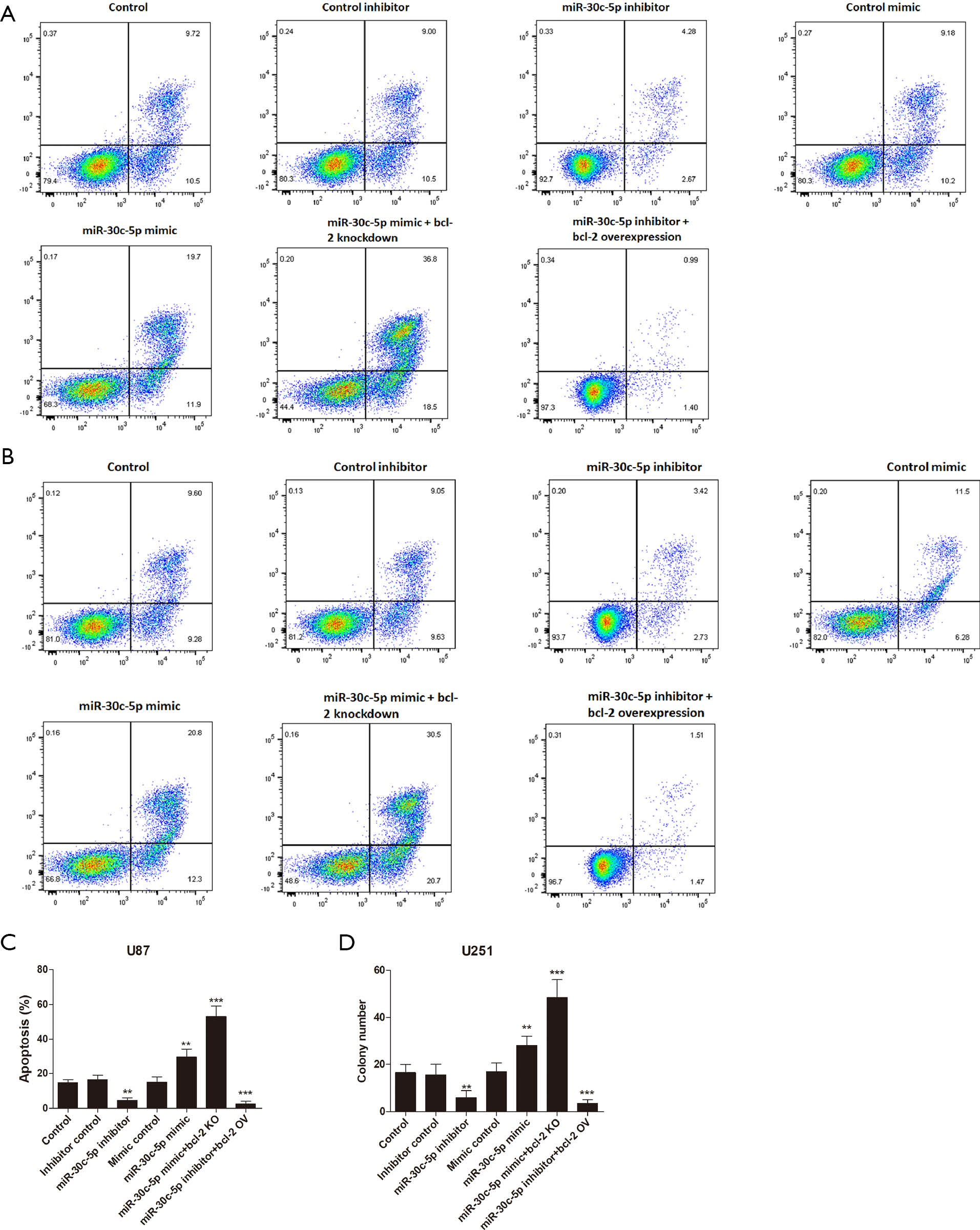 In the present study, we demonstrated that glioma cell growth and invasion were inhibited, and apoptosis was induced by overexpression of miR-30c-5p. These observations elicited a further study for the mechanisms of miR-30c-5p responsible for these functions.

It is well established that miRNAs post-transcriptionally regulate the downstream targets to interfere with cellular behaviors, such as proliferation, apoptosis, migration, and drug resistance (16,17). By this means, miRNAs play an important role in tumor initiation and progression. For instance, miR-21 is found to be elevated in colorectal cancers, and enforced expression of miR-21 promoted tumor cell migration and metastasis via targeting PDCD4 (18). Thus, miR-21 acts as an oncogene to exhibit regulatory effects in cancer development under this context. On the other hand, miRNAs also function as tumor suppressing factors, and are constantly expressed in a lower level. For example, let-7, a tumor suppressor gene, is absent in lung cancers and could inhibit cancer progression by inhibiting downstream target k-Ras and c-MYC (19).

miR-30c-5p is a member of the miR-30c family and has been reported to be essential for cellular behaviors. A recent study suggests that miR-30c-5p directly targets FASN and ameliorates hepatic steatosis in leptin receptor-deficient (db/db) mice (20). In addition, miRNA-30c-5p inhibits NLRP3 inﬂammasome-mediated endothelial cell pyroptosis by downregulating FOXO3 in ox-LDL-treated human aortic endothelial cells, suggesting a potential therapeutic value in atherosclerosis (21). Moreover, miRNA-30c-5p has been reported to be down-regulated in breast, lung, gastric and ovarian cancers (22), indicating its potential tumor suppression effect in human cancers. Indeed, down-regulation of miR-30c-5p is associated with clinical metastasis and poor prognosis in gastric cancer patient. Mechanical investigation revealed miR-30c-5p could inhibit migration and epithelial to mesenchymal transition (EMT) process via targeting metastasis-associated protein 1 (MTA1) (15). In ovarian cancer cells, miR-30c-5p is shown to suppress cisplatin resistance and EMT through targeting DNA methyltransferase-1 (DNMT1) expression (23). Previous studies reported that miRNA-30c could be involved in self-renewal and neural differentiation in glioma cells (16). However, there are still no evidence of miR-30c-5p in the pathogenesis and progression of glioma. In the present study, we found that enforced expression of miR-30c-5p significantly suppressed the proliferation and colony formation, and induced cell apoptosis in glioma cells. In contrast, inhibition of miR-30c-5p promoted cell growth and inhibited apoptosis in tumor cells. Regarding mechanical investigation, it is well known that apoptosis can be initiated by the extrinsic pathway, which is mediated by activation of caspase 3, 8 and 9 (12-14). Our data showed that miR-30c-5p promoted the activation of caspase 3 and caspase 9, but not caspase 8 in glioma cells. Furthermore, it has been reported that miR-30c-5p is associated with tumor cell invasion and distant metastasis (15). Consistently, our study observed that miR-30c-5p strongly suppresses the invasion of glioma cells, representing its potential role in metastatic glioma treatment.

In summary, these findings provide new insights into the role of miR-30c-5p in human gliomas. Upregulation of miR-30c-5p could suppress glioma growth and invasion by targeting Bcl2, suggesting that miR-30c-5p might represent a novel target for glioma therapy.

Funding: This study was supported by Suzhou Science and Technology Project (No. SYS201630).

Reporting Checklist: The authors have completed the MDAR reporting checklist. Available at http://dx.doi.org/10.21037/tcr-19-2957

Conflicts of Interest: All authors have completed the ICMJE uniform disclosure form (available at http://dx.doi.org/10.21037/tcr-19-2957). The authors have no conflicts of interest to declare.

Ethical Statement: The authors are accountable for all aspects of the work in ensuring that questions related to the accuracy or integrity of any part of the work are appropriately investigated and resolved. The study was conducted in accordance with the Declaration of Helsinki (as revised in 2013). This study was approved by the Ethics Committee of the Second Affiliated Hospital of Soochow University [No. JD-LK-2018-027-02], and all participants provided written informed consent.