Human cancer is a complex disease caused by the genetic and epigenetic alternations of two kinds of crucial genes: tumor suppressor genes and oncogenes (1). p53, one of the most famous tumor suppressor genes, controls DNA repair system and restrict chromosomal instability (2). While KRAS, as an essential oncogene, has been shown to promote cancer development and progression as well as influence the tumor microenvironment (3). However, some genes like TGF-β family members exert tumor suppressive effect early in tumorigenesis, but later they can lead to tumor progression and metastasis depending on signaling from growth factor receptors or activity of transcriptional regulators (4).

Being a long non-coding RNA and unable to encode protein, growth arrest-specific 5 (GAS5) has been reported to be a vital tumor suppressor and involved in apoptosis, proliferation, migration, invasion, cell cycle and metabolism of multiple cancers (5). Recent research reports that GAS5 suppressed the angiogenesis, invasion, and metastasis of colorectal cancer by inhibiting the activated Wnt/β‐catenin signaling pathway (6). In addition, GAS5 could inhibit cervical cancer cell proliferation, migration and invasion through miR-21 (7). Overexpression of GAS5 in ovarian cancer cells restrained proliferation, and was associated with inflammasome formation and pyroptosis (8).

In this research, we analyzed the expression of GAS5 through data mining in The Cancer Genome Atlas (TCGA) datasets, and explored its prognostic value and potential regulatory mechanism in both kidney renal clear cell carcinoma (KIRC) and liver hepatocellular carcinoma (LIHC).

We present the following article in accordance with the MDAR reporting checklist (available at http://dx.doi.org/10.21037/tcr-20-2221).

Data from the TCGA dataset

Expression of GAS5 in most cancer types represented in the form of log2(TPM + 1) from the University of California Santa Cruz (UCSC) Xena Project were obtained from GEPIA (http://gepia.cancer-pku.cn/) (11), only those groups had more than 10 samples were included. And the correlation between GAS5 and ABHD2 as well as the survival data of patients (updated to June 2019) with KIRC and LIHC were downloaded from R2 website related to TCGA program (http://r2platform.com). DNA methylation data of GAS5 and abhydrolase domain containing 2 (ABHD2) (measured by the Infinium Human Methylation 450 BeadChip) in LIHC and KIRC were downloaded from the TCGA Wanderer (http://www.maplab.cat/wanderer) (12). All these data can be downloaded for free from the above public website. The study was conducted in accordance with the Declaration of Helsinki (as revised in 2013).

One-way ANOVA was used to detect differences for comparisons. Survival curves were generated by the Kaplan Scan by using median or scan as a cutoff in assessing whether GAS5 or ABHD2 has the potential to separate patient survival and test the P value in a log-rank test. Wilcoxon test was conducted to assess the DNA methylation of CpG sites of GAS5 or ABHD2 between normal and tumor sample in both KIRC and LIHC patients. P<0.05 was considered as statistically significant.

Expression of GAS5 in most cancer types from TCGA program

To explore the expression of GAS5 in different kinds of cancers, we obtained RNA-sequencing data from TGCA in GEPIA (Figure 1). Nine types of tumor were excluded because they didn’t have enough normal tissue samples. By comparing the expression level of GAS5 between 14 kinds of cancer tissues and their normal tissues, we found that the expression of GAS5 had no significant difference in most of them, but was significantly upregulated in KIRC and LIHC (fold change >2, P<0.01). 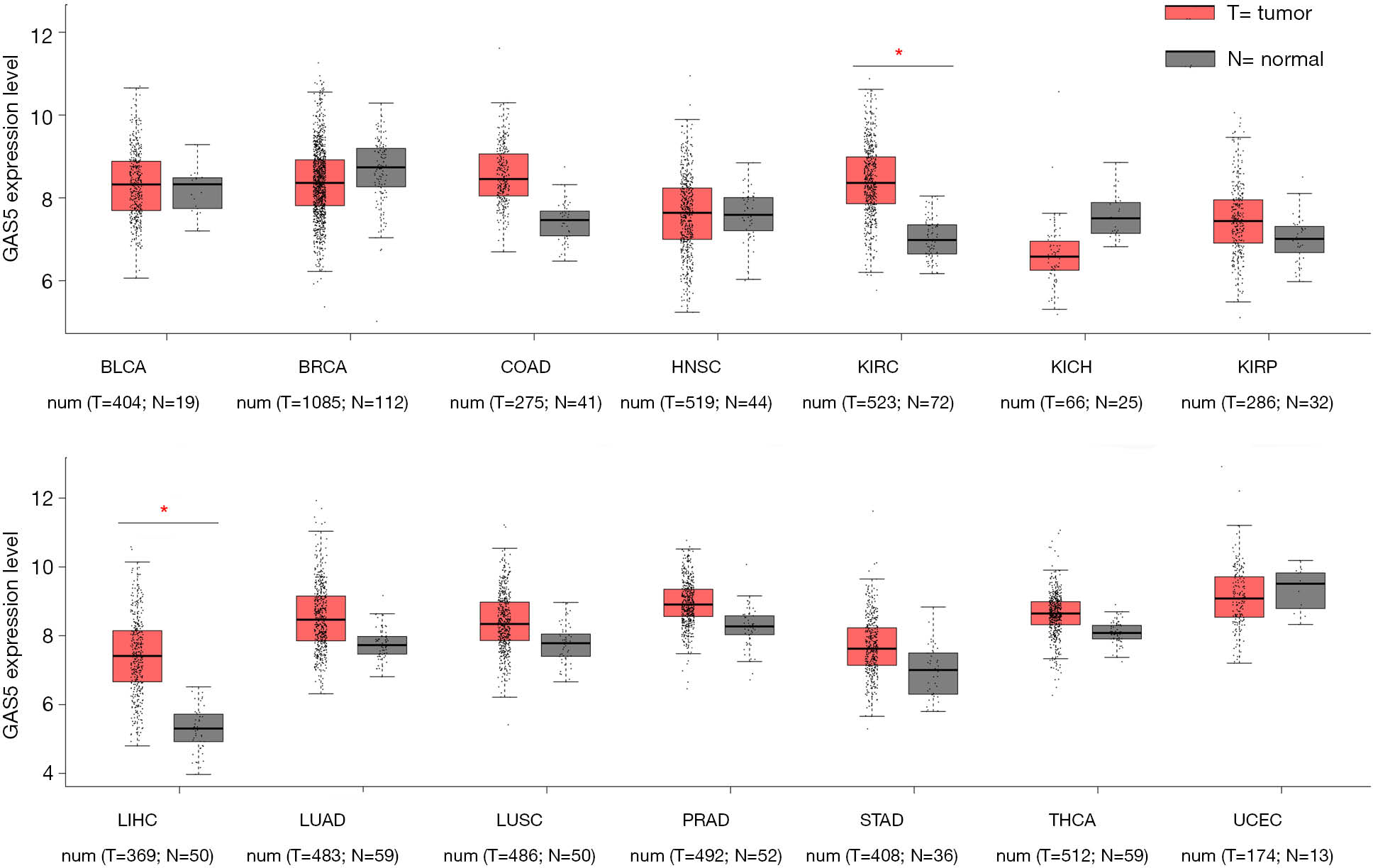 New biologically relevant hypotheses can be generated when we find out the related genes. Therefore, we performed HugoOnce mode analysis in R2 software to explore the relations of other genes with GAS5 in KIRC and LIHC. It summarized the results of a mini ontology analysis (Tables 1,2). In KIRC, those genes were involved with the process of DNA repair, apoptosis, cell cycle, kinase, membrane, signal transduction, transcription regulator activity and transcriptional repressor activity; while in LIHC, they were involved with DNA repair, development, membrane, transcription regulator activity and transcriptional repressor activity. Among them, membrane groups had the most significant P value. As a membrane protein, ABHD2 was highlighted in both KIRC and LIHC when we listed the top 20 genes (Tables 3,4). 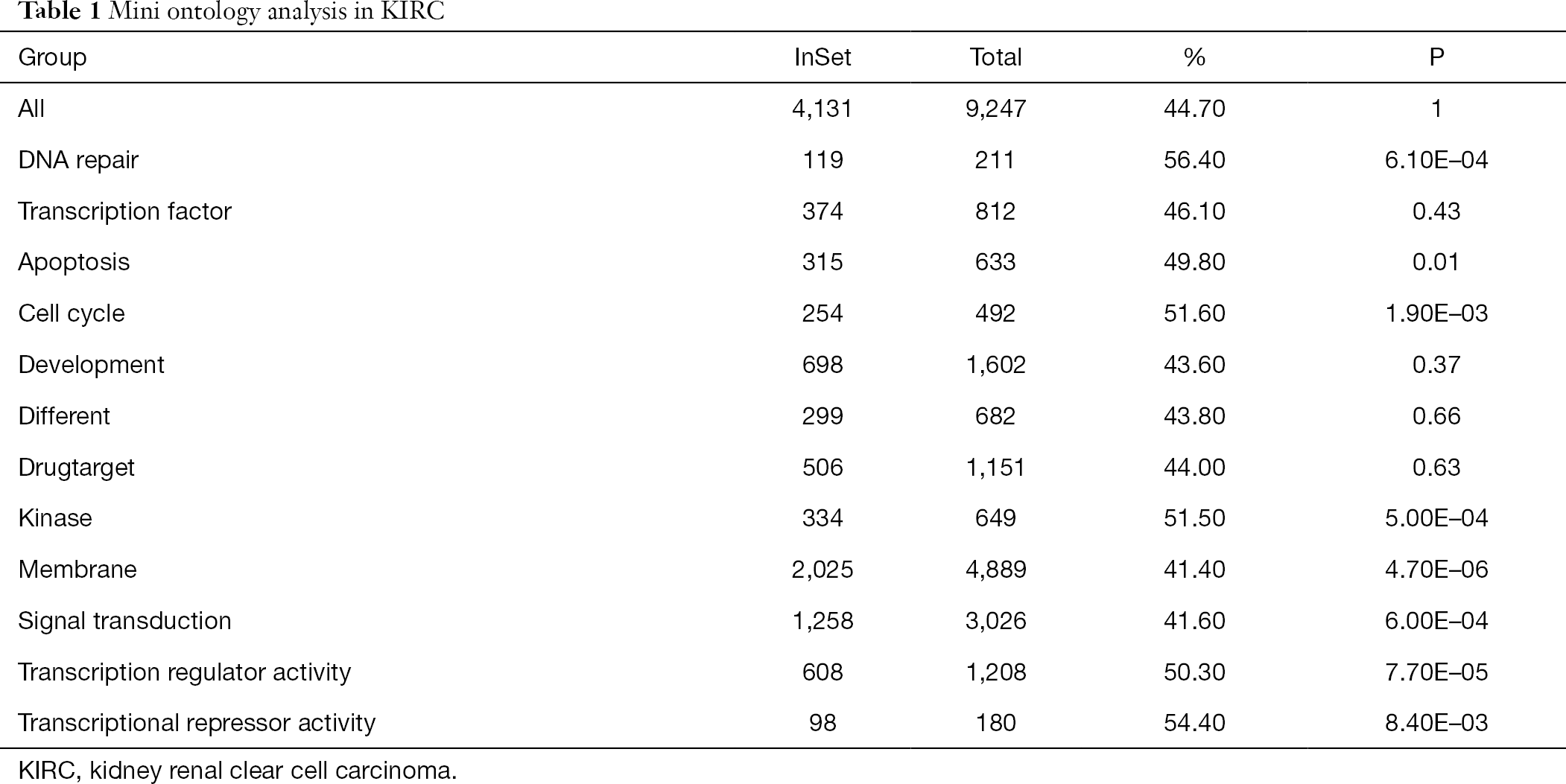 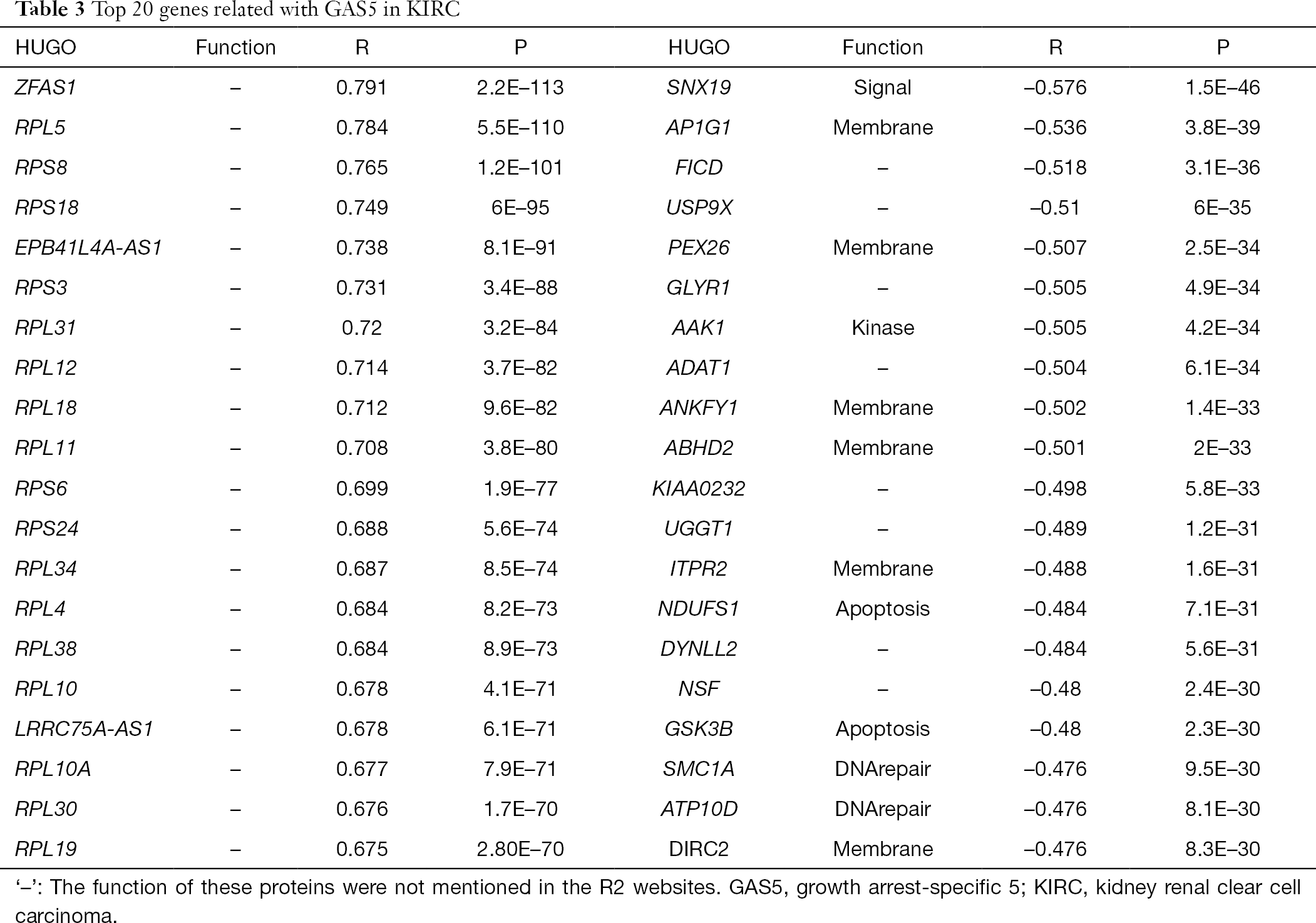 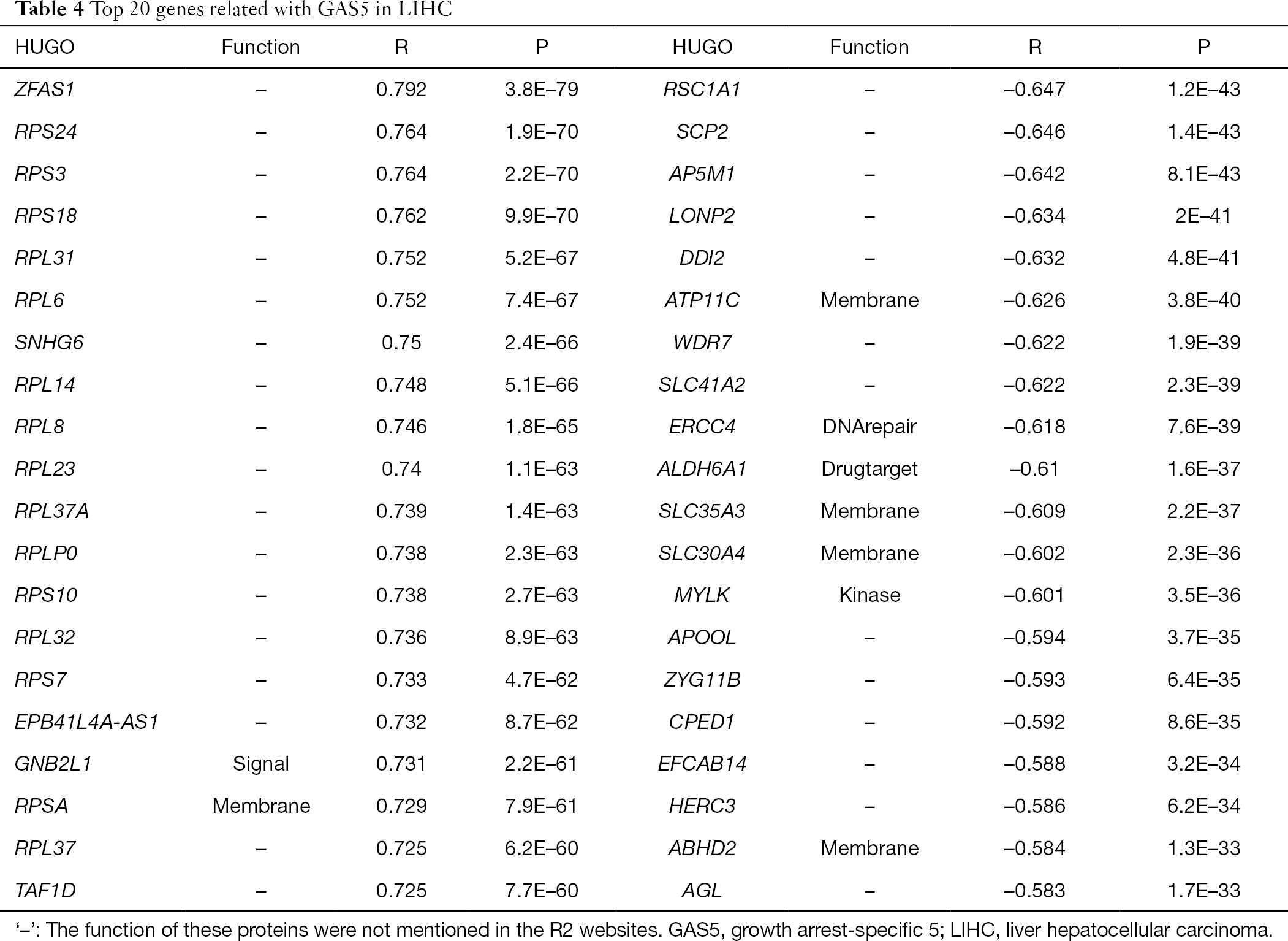 ABHD2 is negatively correlated with GAS5 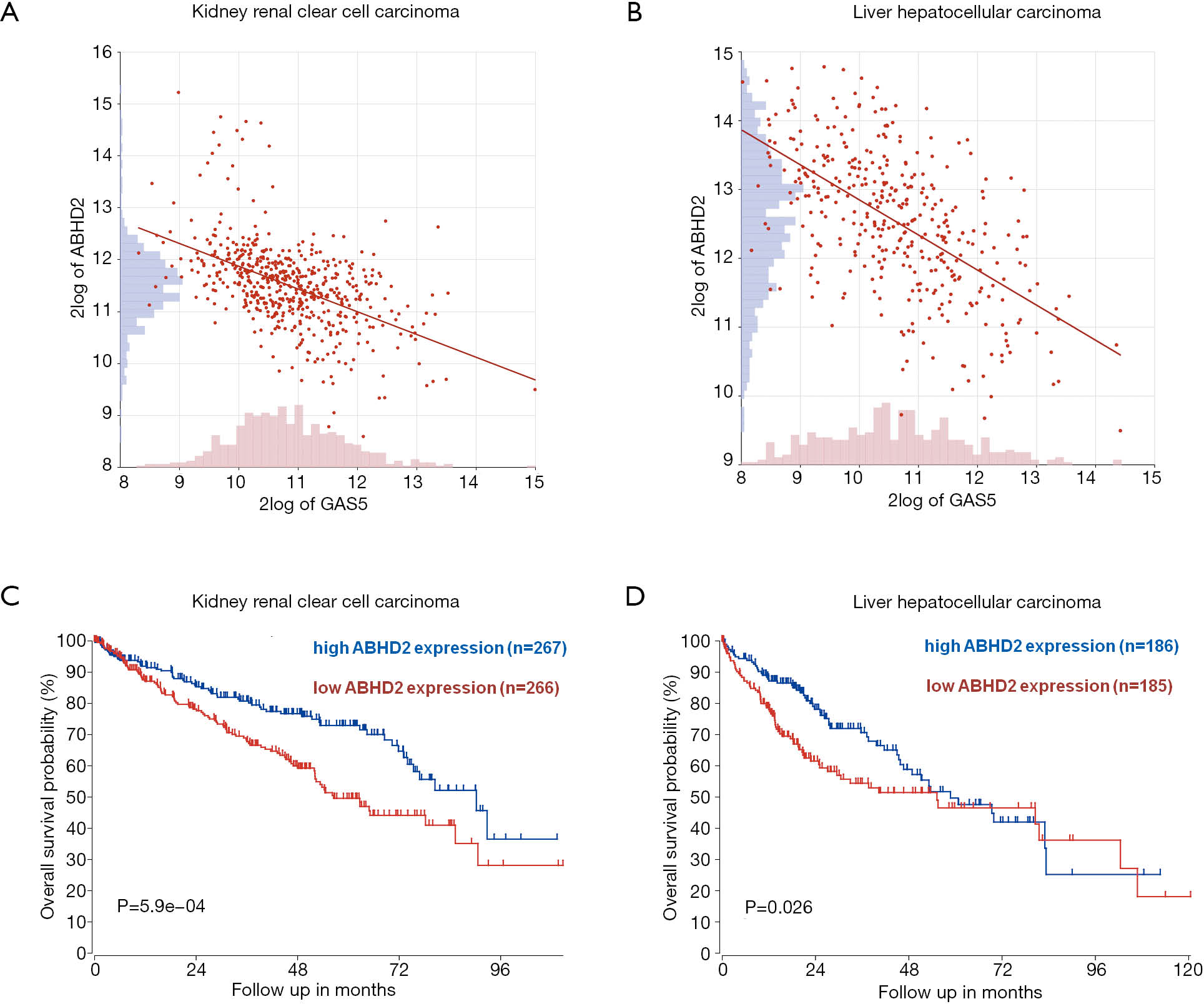 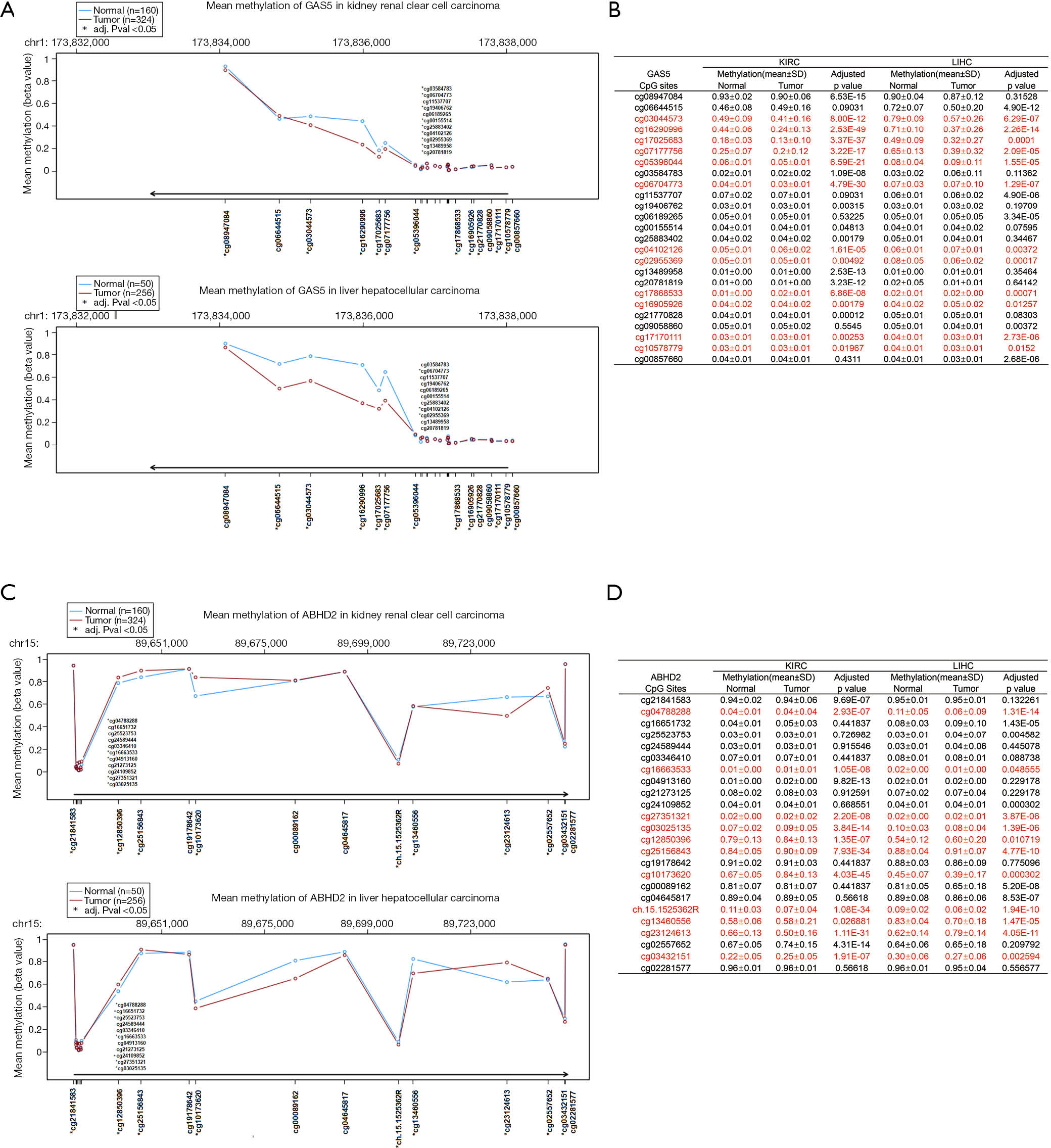 Published data showed that the expression of GAS5 was decreased in renal cell carcinoma cell lines (13). Similarly, reduced GAS5 expression was detected in clear cell renal cell carcinoma tissues and independently correlated with poor disease free survival of patients; their data revealed that GAS5 may function as a competing endogenous RNA (ceRNA) to positively regulate hZIP1 by sponging miR-223 (14). Latest research reported GAS5 downregulation promoted responsive renal cell carcinoma cells resistant to sorafenib treatment through miR-21/SOX5 axis (15). However, our research demonstrated that the mRNA level of GAS5 was significantly increased more than two folds in TCGA-KIRC dataset, probably because TCGA-KIRC dataset had much more samples than those previous studies. Moreover, high GAS5 expression was associated with poor OS, which predicted that GAS5 could be a prognostic marker for KIRC patients.

There are contrary results about GAS5 association with liver cancer. Two previous studies reported that downregulation of GAS5 was detected in liver cancer tissues compared with adjacent tissues and its reduction was associated with poor OS (16,17). Some other studies revealed that GAS5 could suppress metastasis via miR-21 (18) and inhibit the epithelial mesenchymal transition (EMT) of liver cancer cells (19). In contrary, knockdown of GAS5 partially revert the anti-apoptosis effect in liver cancer cell lines (10). A bioinformatic analysis demonstrated that high GAS5 was an independent predictor of shorter relapse free survival rather than OS in TCGA-LIHC (20). In the contrary, when we used scan as a cutoff to separated LIHC patients into two groups, results showed that high GAS5 level was associated with poor OS.

Therefore, we speculated that GAS5 might have its unique role and exert oncogenic effect in the development and progression of KIRC and LIHC. And, GAS5 might have different functions depending on different genetic backgrounds. In order to find out its new mechanism, we explored the correlated genes of GAS5. Results showed that GAS5 might be involved with DNA repair, development, apoptosis, cell cycle, kinase, membrane, signal transduction, transcription regulator activity and transcriptional repressor activity. Among them, ABHD2 was found to be negatively correlated with GAS5, and its low level could predict poor OS in KIRC and LIHC patients, which has never been reported before.

As a member of the α/β hydrolase superfamily, ABHD2 was reported to possess triacylglycerol (TAG) lipase along with ester hydrolysing capacity and regulate the lipid metabolism and signal transduction (21). ABHD2 deficient in aged mice led to reduction of alveolar type II cells and accumulation of macrophages in the lungs; in addition, ABHD2 could affect macrophage recruitment to atherosclerotic lesions. Thus, ABHD2 seemed to play a significant role in chronic diseases like emphysema and atherosclerosis (22,23). A study showed that knockdown of ABHD2 blocks hepatitis B virus propagation (24); while others reported that ABHD2 knockdown could reduce cell death by attenuating calcium release from the endoplasmic reticulum and mitochondrial calcium uptake in primary mouse lung fibroblasts stimulated with A23187 (25).

To our knowledge, our research is the first to report that GAS5 might be involved with ABHD2 in KIRC and LIHC. Although the detailed molecular mechanisms remain unclear and need further verification, our findings demonstrated GAS5 as a prognostic marker for KIRC and LIHC, and could be useful for the development of biomarkers for those cancer treatments.

Reporting Checklist: The authors have completed the MDAR reporting checklist. Available at http://dx.doi.org/10.21037/tcr-20-2221

Conflicts of Interest: All authors have completed the ICMJE uniform disclosure form (available at http://dx.doi.org/10.21037/tcr-20-2221). The authors have no conflicts of interest to declare.