The role of Livin expression in the clinicopathological features and prognosis of lung cancer: a meta-analysis

As one of the most commonly diagnosed malignancies worldwide (1) that accounts for 33.3% of overall cancer mortality, lung cancer is the leading cause of cancer-related deaths (2). Despite recent advancements in treatment interventions, the prognosis of lung cancer patients has not been improved significantly (3). Therefore, it is important to understand the prognosis mechanism of lung cancer. Livin is located on human chromosome 20q13.3 and contains a BIR domain and a RING finger domain. It is part of the group of inhibitory apoptotic proteins (IAP) and was discovered in 2000/2001. Like other IAP members, the N-terminus of Livin comprises one or more tandem baculovirus IAP repeated sequence with anti-apoptotic effects (4). Specifically distributed in a variety of tumor tissues, Livin plays a role in the regulation of cell apoptosis through a variety of pathways. Apoptosis is known to be regulated by the following caspase-mediated pathways: the death receptor pathway, the mitochondrial pathway and the endoplasmic reticulum pathway (5). It has been reported that Livin is overexpressed in tumor tissues, and that the overexpression of Livin is closely related to tumor invasion, metastasis and treatment resistance (6,7). In recent years, many studies focusing on the correlation between Livin expression and various tumors, such as melanoma (8), breast cancer (9), colorectal cancer (10), gastric cancer (11), hepatocellular carcinoma (12) and osteosarcoma (13) have shown that high Livin expression is a predictive biomarker of tumor progression and that Livin expression profile is useful for providing prognostic information. Consistently, Livin expression in lung cancer tissues has been found to be significantly higher than that in adjacent normal lung tissues and lung benign lesions (14-16). Although many studies have reported that Livin expression is associated with poor prognosis of lung cancer, the prognostic value of Livin expression in lung cancer patients remains controversial. For example, Wu and colleagues (15) have demonstrated that Livin expression is associated with tumor size, differentiation, TNM stage and metastasis. However, Zhang and colleagues (16) have verified that Livin expression is correlated with metastasis, but not with gender, age, smoking status, tumor size, differentiation and TNM stage. In this meta-analysis, all available literature was systematically evaluated to explore the prognostic value of Livin expression in patients with lung cancer. We present the following article in accordance with the PRISMA reporting checklist (available at http://dx.doi.org/10.21037/tcr-20-2835).

Articles fulfilling the following criteria were included in our analysis:

Articles with the following conditions were excluded:

The quality of the included literature was assessed using Newcastle-Ottawa Scale (NOS) (17). All included studies had a quality assessment score of ≥7 stars. Quality evaluation was independently conducted by Min Fei and Qian Yan. Discrepancies were resolved through discussion.

Statistical analyses were performed using STATA 12.0 software (Stata Corp LP, College Station, TX, USA) with P<0.05 considered to be statistically significant. Heterogeneity evaluation of included studies was conducted. In the absence of significant heterogeneity, the fixed-effect model (FEM) was selected for analysis (18). Otherwise, the random-effects model (REM) was used to lower the effect of heterogeneity (19). To analyze the prognostic value of Livin on lung cancer, OR with corresponding 95% confidence interval (95% CI) was calculated. The results presented in the form of forest plots were considered to be relevant when the overall 95% CI horizontal line of all enrolled studies did not intersect the invalid vertical line, but fell on the right side of the invalid line instead.

A total of 183 articles were initially retrieved from various databases. There were still 151 articles after the removal of duplicating studies, following which 49 studies remained after the elimination of comments, case reports, meta-analyses and unrelated studies. Next, with further review, 15 studies that were limited to molecular biological mechanism investigation, and another 14 studies that did not offer sufficient data (OR and 95% CI) were excluded. Finally, 20 studies (14-16,21-37) with a total of 1,395 patients were incorporated in this meta-analysis (Figure 1). The basic information of studies was shown in Table 1 and Table 2. Number of included patients in each study ranged from 30 to 216 (median 123). The expression of Livin was detected using immunohistochemistry (IHC) in 19 studies, and western blot (WB) in 1 study. Most of these eligible articles selected Asian populations as the research object. The NOS scores of included studies were ≥7 (with a mean value of 7.25). 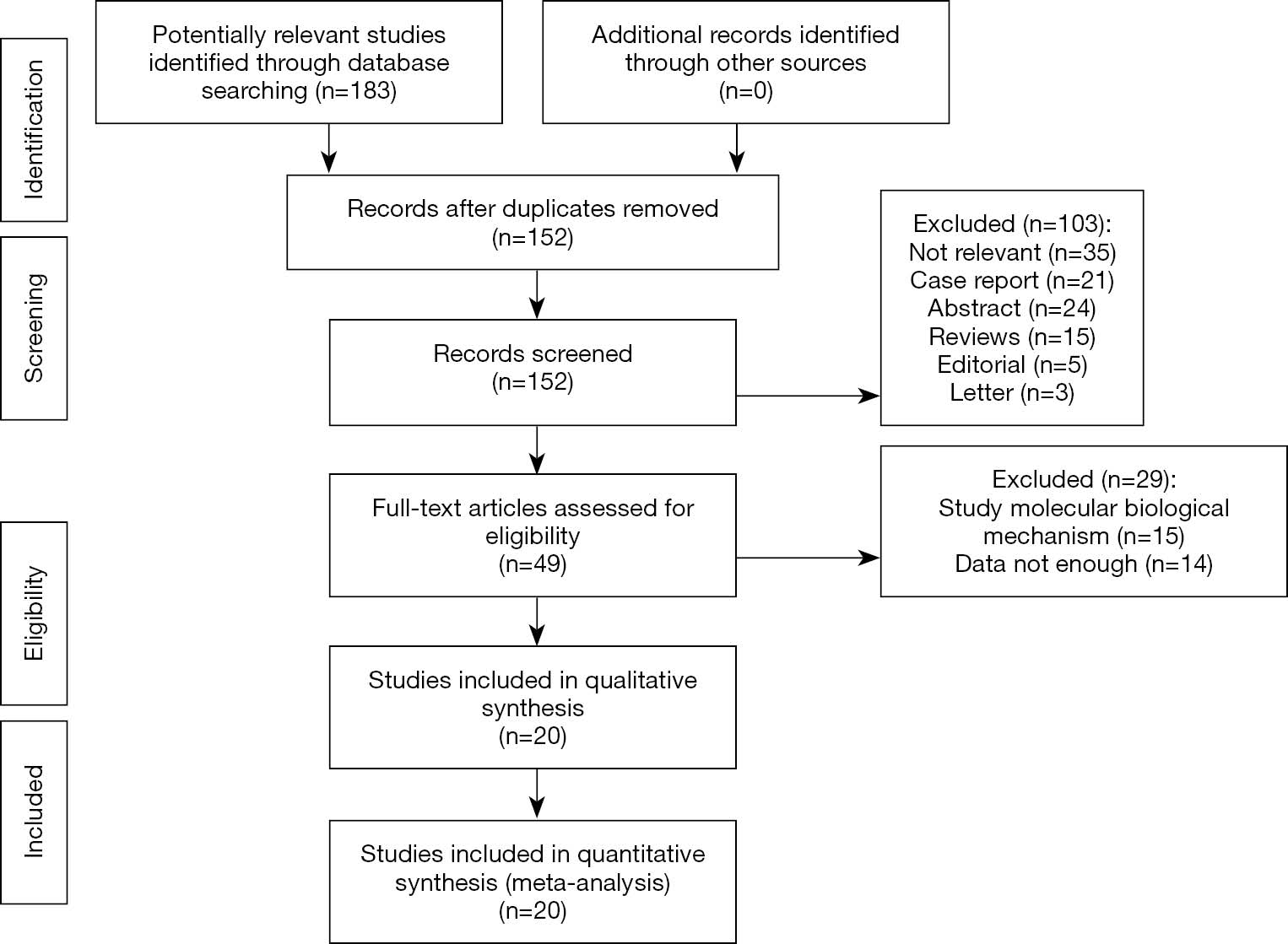 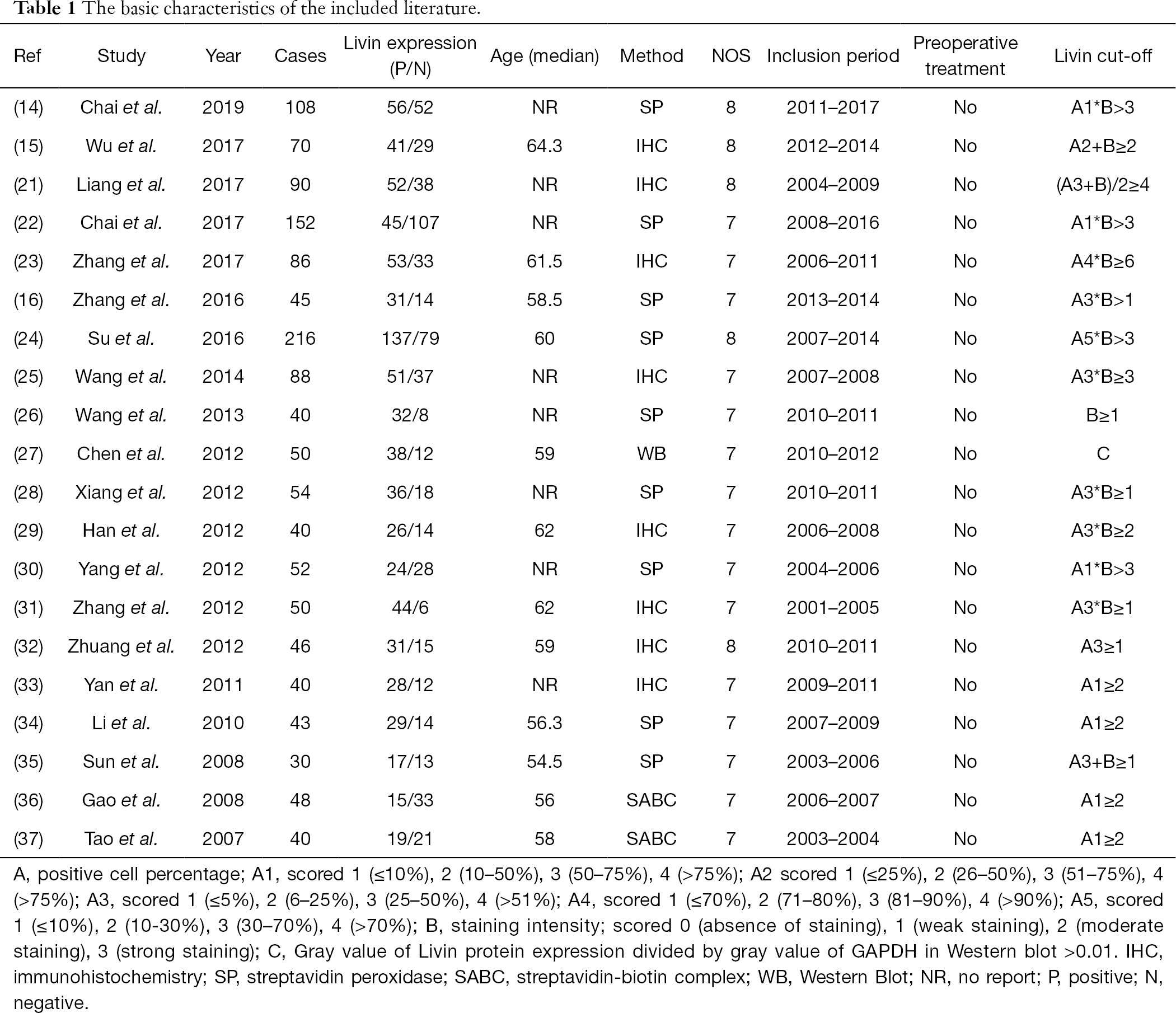 Table 1 The basic characteristics of the included literature.
Full table 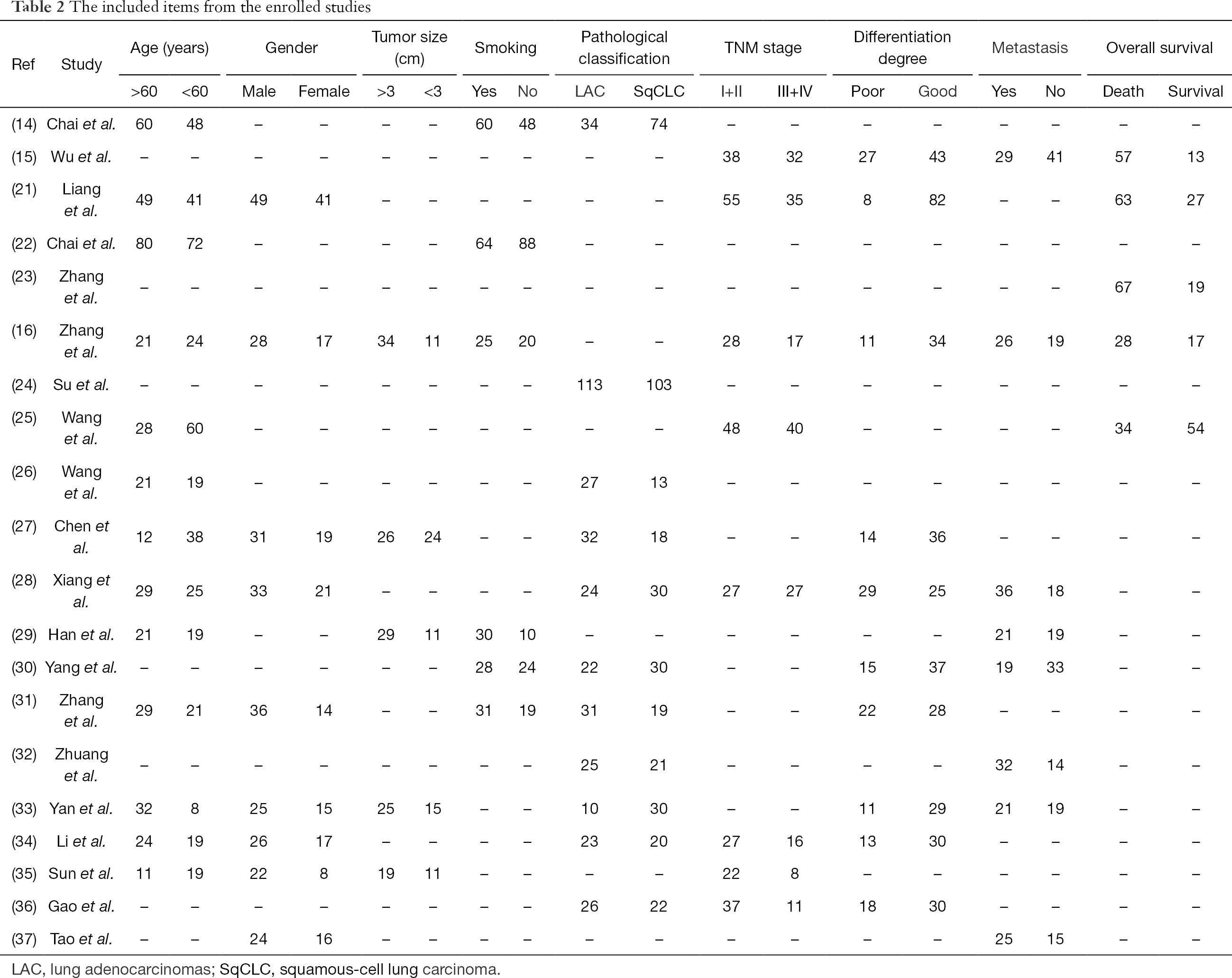 Table 2 The included items from the enrolled studies
Full table 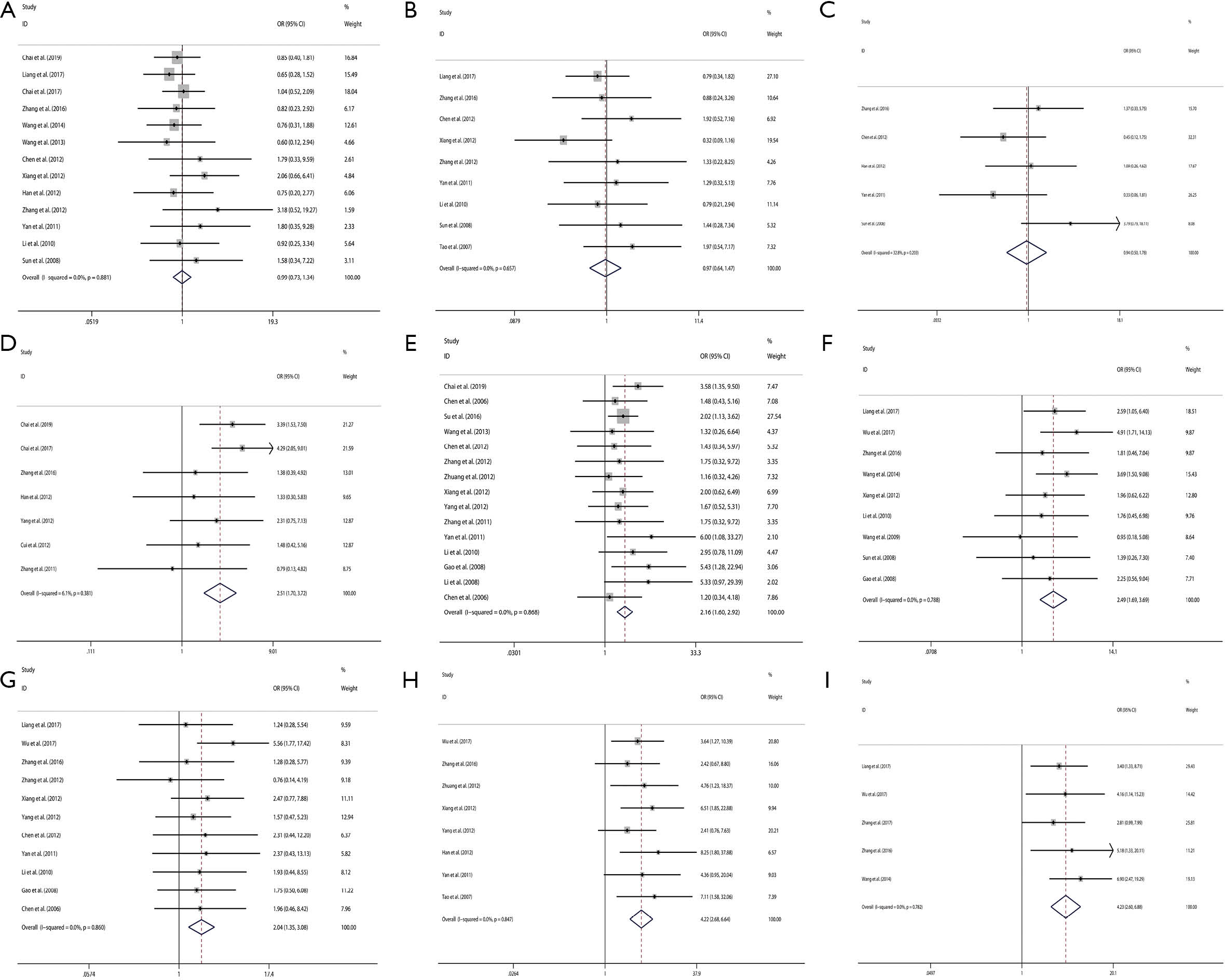 The stability of our results was estimated by sensitivity analysis by excluding one study after another. Our analysis showed that there were no significant changes in OR and heterogeneity, and that our findings were not impacted by any study, which was an indication of the credibility of our conclusion (Figure 3). 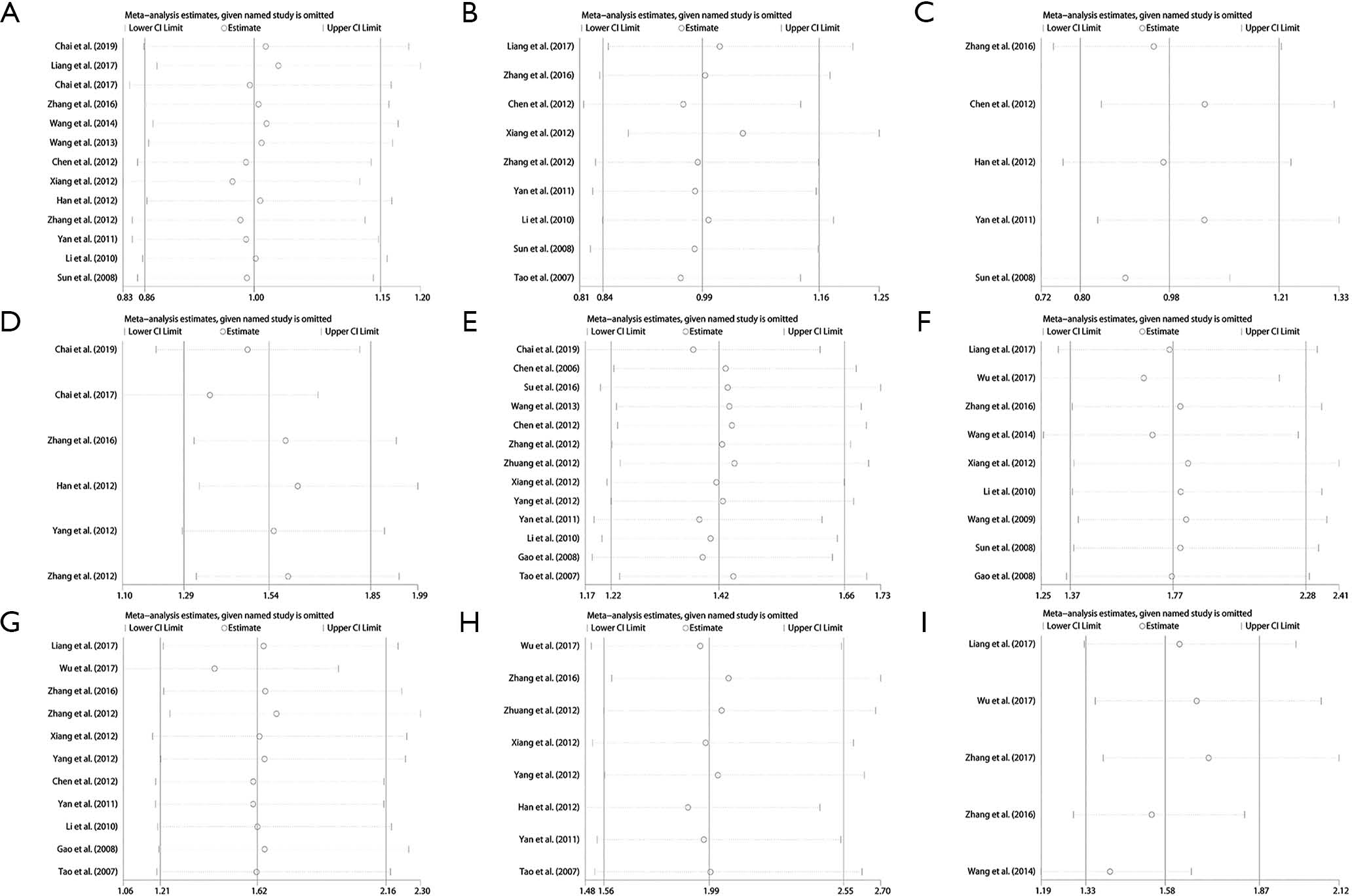 As shown in Figure 4, substantially symmetrical funnel plots (A,B,C,E,F,G,H,I) indicated the absence of significant publication bias (P>0.05) in the association between Livin expression and age, gender, tumor size, pathological classification, TNM stage, differentiation, metastasis and overall survival. However, asymmetrical funnel plot (D) indicated the presence of publication bias (P<0.05) in the association between Livin positive expression and smoking status. In order to make sure that all included articles conformed to the inclusion criteria and were eligible, the association between smoking status and lung cancer outlined in the included studies was carefully reviewed. Studies with desired results that were published more easily may contribute to publication bias, so the conclusion from these studies should be treated with caution. 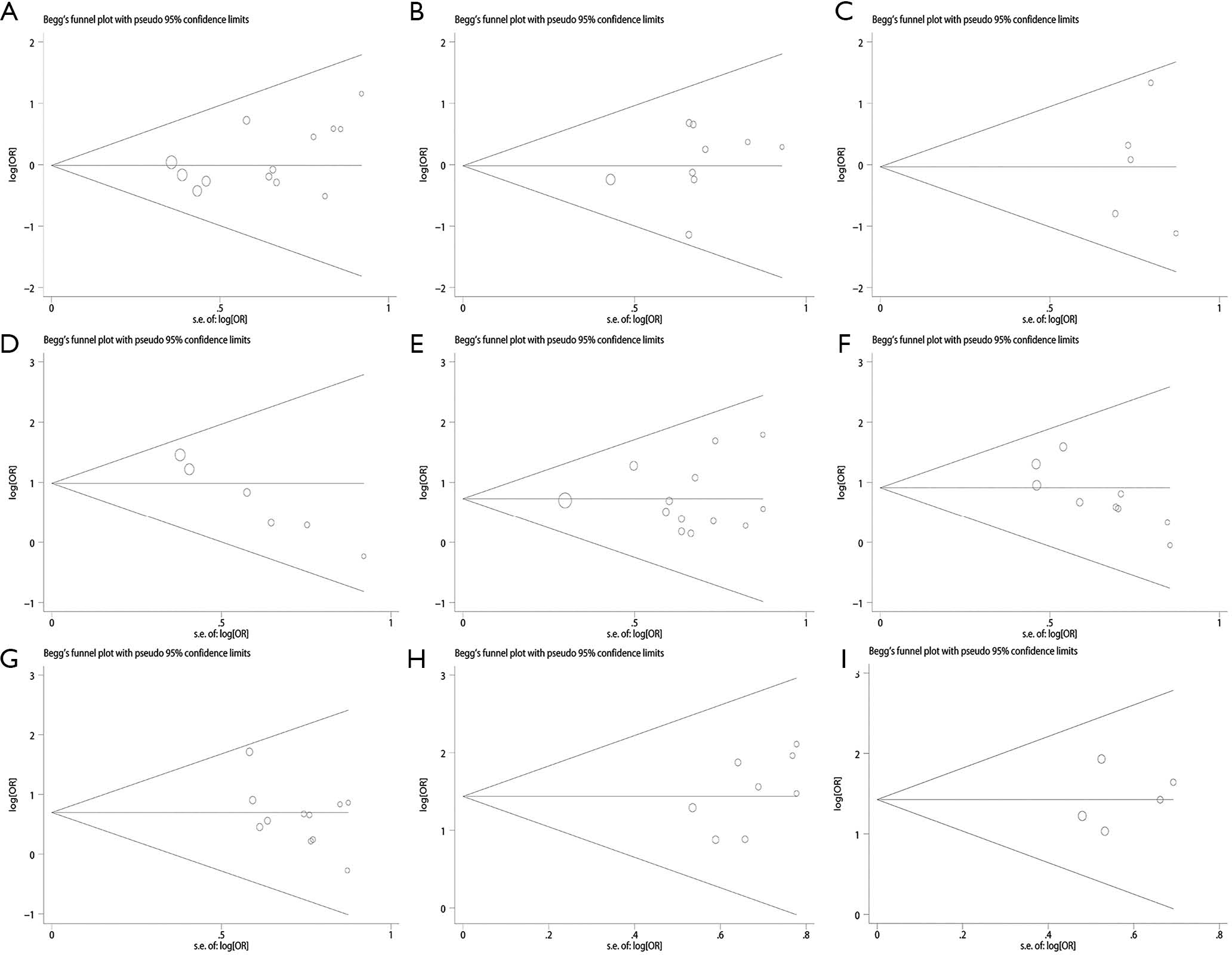 Lung cancer is a disease with poor prognosis characterized by the highest rates of mortality and morbidity among other cancer types (38,39), and represents a significant clinical challenge. The efficacy of traditional lung cancer treatment interventions, including surgery, radiotherapy and chemotherapy has been unsatisfactory (40). Accordingly, in order to improve the life quality of patients, effective treatment strategies that can decrease tumor recurrence and treatment resistance have gained much research attention in recent years, especially targeted therapy and immunotherapy (41,42). Nevertheless, the mortality rate has not been improved significantly (43). Hence, the discovery of novel prognostic biomarkers and targets is urgently in need to improve treatment efficacy.

Similar to other solid tumors, lung cancer is resistant to apoptosis (44). Therefore, targeting of apoptotic pathway represents a promising method in the identification of normal cells and in the selective killing of cancer cells. Highly expressed IAP in malignant tumors has been shown to tightly control the level of cell apoptosis (45). As a member of the IAP family, Livin inhibits tumor cells from undergoing apoptosis, leading to infinite cell proliferation and metastasis (46). Livin plays an apoptotic role by binding with caspases (5) or by activating the TAK1/JNK1 pathway (47). Previous studies have found that Livin is overexpressed in lung cancer, and that overexpression of Livin is strongly associated with lung cancer prognosis and diagnosis. This meta-analysis systematically evaluated the effect of Livin on the prognostic outcome of lung cancer patients.

This study has a number of limitations. Firstly, the cut-off values for Livin expression were based on positive cell percentage and staining intensity. The cut-off values were not exactly the same, which may contribute to study bias. According to previous studies, although different cut-off values may not affect the final conclusion (50,51), the conclusion should be treated with caution. Secondly, studies with desired results were more easily released, and publication bias was found for the association between Livin expression and smoking status. Thirdly, most subjects in all eligible literature were from Asia. Therefore, a detailed study with larger sample size is essential to comprehensively appraise the prognostic value of Livin in lung cancer.

Taken together, for the first time, we discuss the association between Livin expression and lung cancer. Our meta-analysis suggests that Livin expression is significantly associated with smoking status and LAC (P<0.05), indicating that Livin may be a potential diagnostic biomarker of LAC.

Moreover, our results show that Livin expression is associated with high TNM stage, poor differentiation, metastasis and low 5-year overall survival of lung cancer (P<0.05), suggesting that Livin may be a candidate prognostic biomarker for lung cancer. Due to the limitations, more rigorous and well-designed investigations are necessary to better estimate the prognostic role of Livin in lung cancer.

Reporting Checklist: The authors have completed the PRISMA reporting checklist. Available at http://dx.doi.org/10.21037/tcr-20-2835

Conflicts of Interest: All authors have completed the ICMJE uniform disclosure form (available at http://dx.doi.org/10.21037/tcr-20-2835). The authors have no conflicts of interest to declare.