Ki-67 is a kind of DNA-binding nuclear protein expressed throughout the proliferative phases of the cell cycle, but not in the quiescent phase (1). Therefore, it has become a well-known biomarker to evaluate the proportion of proliferating cells in a specific cell population (2). In clinical studies, it has been confirmed that high Ki-67 expression is closely related to a poor prognosis in a variety of tumors, such as breast cancer, gastrointestinal stromal tumor, pancreatic cancer, prostate cancer, and bladder cancer (3-7).

Lung cancer is the most common malignant tumor worldwide and one of the main causes of cancer-related death at present (8). In recent years, lung adenocarcinoma (LUAD) has been the most common pathological type of lung cancer, and its incidence has grown rapidly (9). High expression of Ki-67 is significantly associated with a poor prognosis in patients with LUAD, including even early-stage LUAD (10-13). In addition, Ki-67 proliferation index (PI) is an independent risk factor for recurrence in patients with early-stage LUAD after segmentectomy (14). However, Ki-67 PI has not yet become a routine parameter evaluated by pathological detection in lung cancer patients. At present, there are few studies on the associations between clinicopathological features and Ki-67 PI.

Therefore, the study aimed to explore the clinicopathological characteristics of peripheral clinical stage IA LUAD with high Ki-67 expression. We present the following article in accordance with the STROBE reporting checklist (available at http://dx.doi.org/10.21037/tcr-20-2608).

A retrospective case-control study was carried out in China-Japan Friendship Hospital from January 2017 to December 2018. The study was conducted in accordance with the Declaration of Helsinki (as revised in 2013). The study was approved by the institutional ethics committee of China-Japan Friendship Hospital (No. 2018-13-K08). The institutional ethics committee waived the need for informed consent because of its retrospective design and the use of anonymized data.

Clinical, pathological, and radiological features of patients who underwent curative operations for LUAD with clinical tumor size ≤3 cm were reviewed. Inclusion criteria: (I) according to the tumor-node-metastasis (TNM) stage in the 8th edition of lung cancer (15), the preoperative stage was cIA; (II) operations were performed, including lobectomy, segmentectomy and wedge resection of the lung, with mediastinal lymph nodes sampling or dissection; (III) LUAD was confirmed by pathological examination which was performed within 1 week after the operation. Exclusion criteria: (I) history of previous lung operation; (II) multiple pulmonary nodules on chest computed tomography (CT); (III) without mediastinal lymph node sampling or dissection; (IV) metastatic LUAD; (V) without definite pathological subtype or specific variants of invasive LUAD such as fetal or enteric LUAD; (VI) Ki-67 immunohistochemical staining was not performed after the operation.

The electronic medical records of all patients were reviewed, and the relevant clinical features were collected such as sex, age, smoking status, carcinoembryonic antigen (CEA) level, and operation procedures. The normal upper limit of CEA was 5 ng/mL.

According to the classification method of the International Lung Cancer Research Association/American Thoracic Society/European Respiratory Society, invasive adenocarcinoma (IAD) was further classified (16). The pathological TNM stage was based on the eighth edition of TNM classification proposed by the International Association for the Study of Lung Cancer (IASLC) Lung Cancer Staging Project (15). According to the 2015 World Health Organization (WHO) classification of lung cancer, STAS was defined as pathological micropapillary clusters, solid nests or single cells beyond the edge of the tumor, and are separated from the main tumor (17).

The mouse anti-human Ki-67 monoclonal antibody (Zhongbin Jinqiao Biotechnology Co., Ltd., Beijing, China) was used for immunohistochemical staining in strict accordance with the instructions. Five high-power fields were randomly selected from each staining section. The average percentage of positive cells in the total number of cells was quantitatively analyzed as the Ki-67 PI. PI ≥14% was defined as high Ki-67 expression and PI<14% was defined as low Ki-67 expression.

Statistical analyses were performed using IBM SPSS Statistics 22.0 (IBM, Chicago, IL, USA). Continuous variables with a normal distribution are presented as the mean ± standard deviation (SD), nonnormally distributed variables are reported as the median (interquartile range). Categorical variables were represented by the number and percentage of cases. Clinicopathological feature differences between groups were compared by using the Student’s t-test or Mann-Whitney U test for continuous variables, and χ2 test, continuous calibration χ2 test, or Fisher exact test for categorical variables. The variables with P<0.05 in the univariate analysis were carried into binary Logistic regression analysis (forward stepwise regression manner). A receiver operating characteristic (ROC) curve was used to determine the optimal cutoff values for continuous variables. The area under the curve (AUC) was adopted to measure the diagnostic power. The Youden index was used to select the optimal sensitivity and specificity from the ROC curves. P<0.05 was considered to indicate statistical significance (double-tailed). 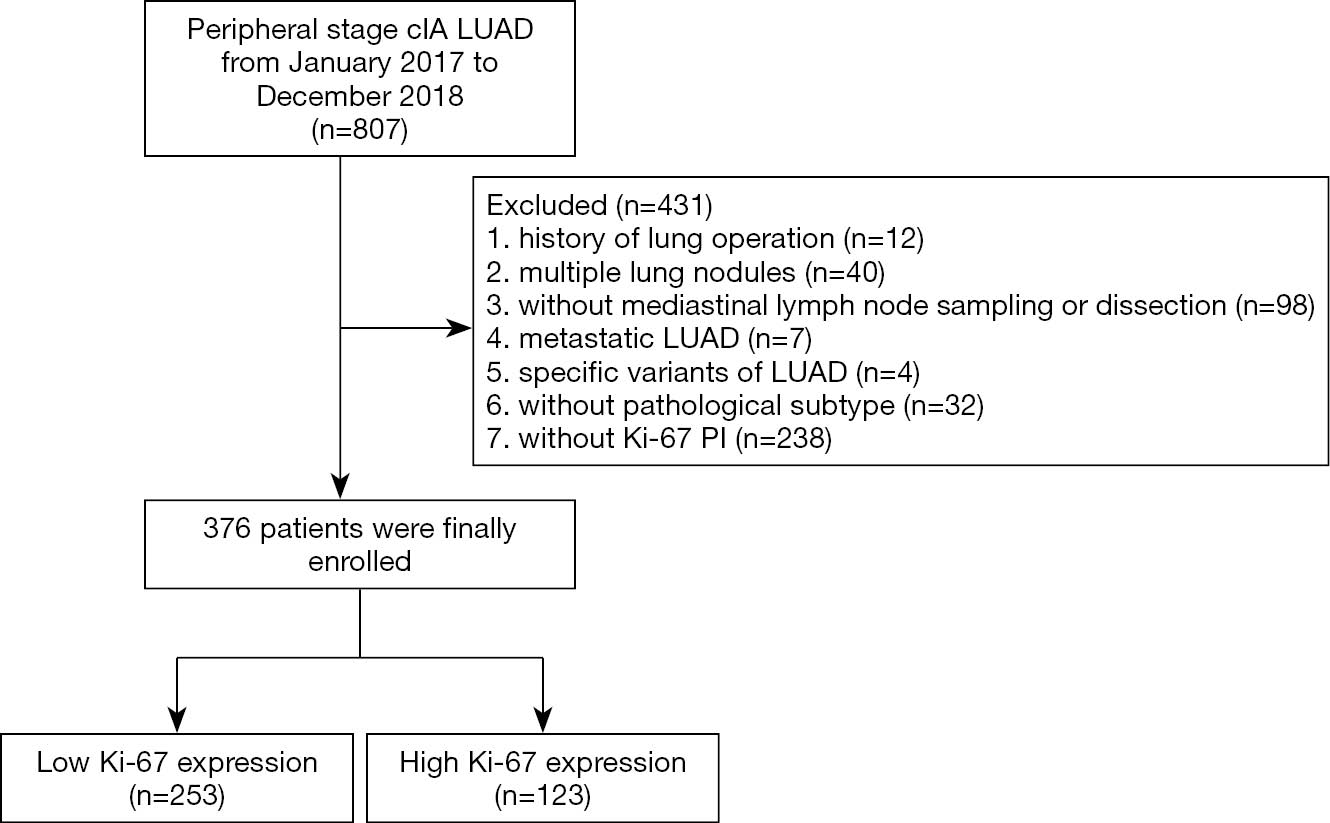 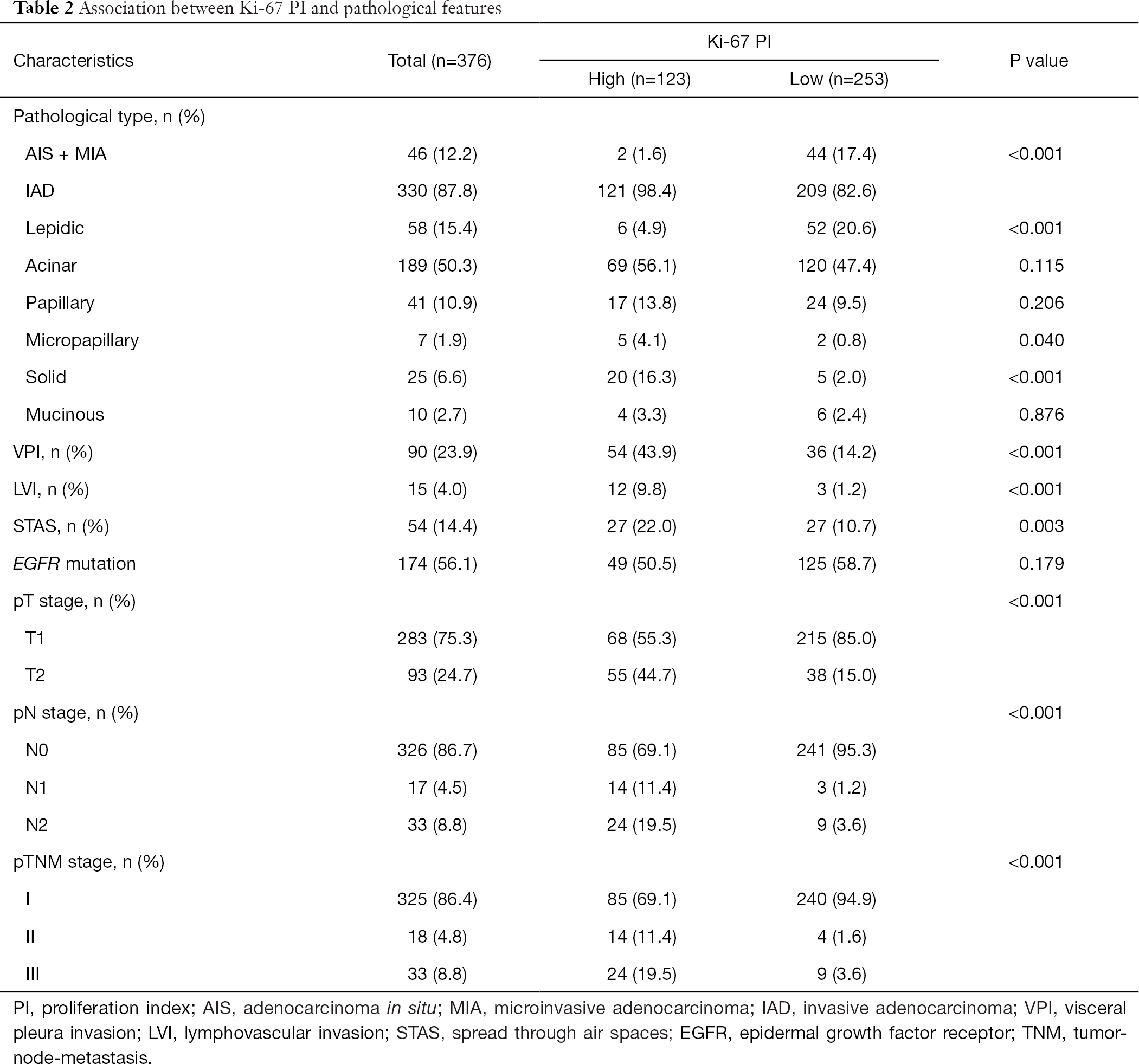 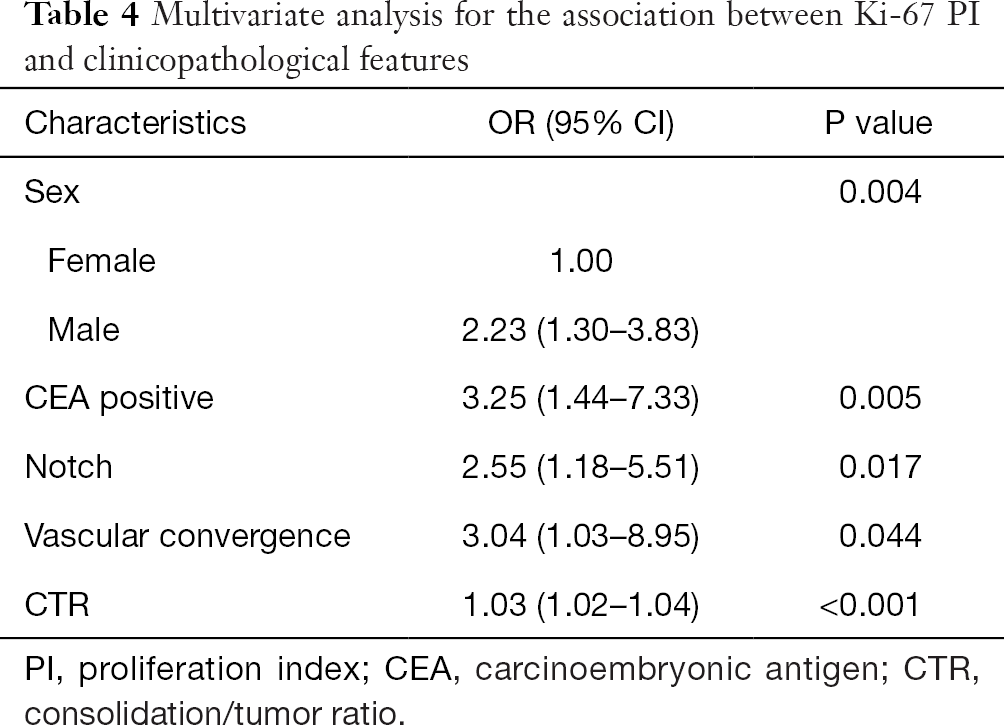 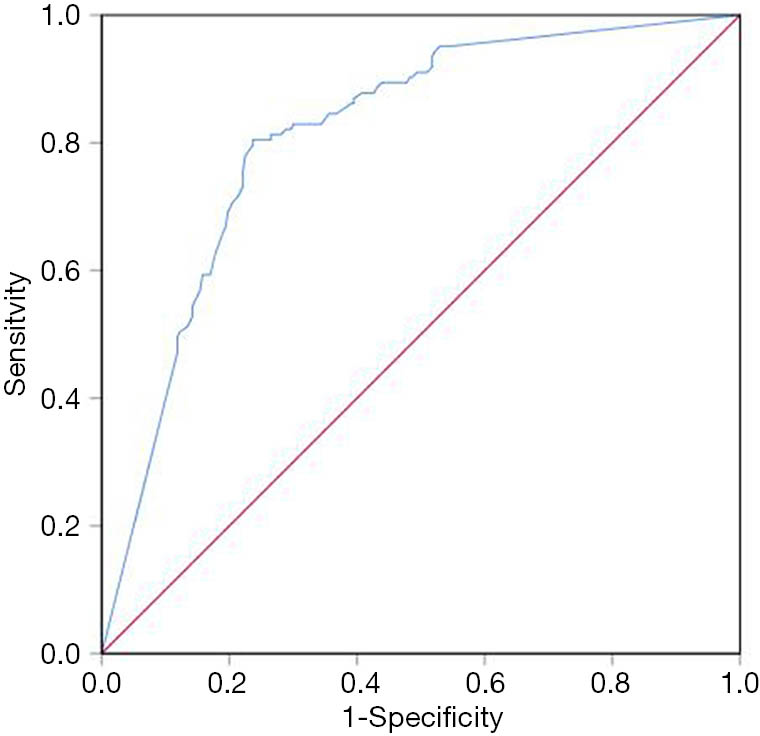 Several clinical studies have confirmed that high Ki-67 expression is significantly related to a poor prognosis in a variety of tumors, such as breast cancer, gastrointestinal stromal tumor, pancreatic tumor, prostate cancer, and bladder cancer (3-7). Moreover, Ki-67 is also an important reference in clinical decision-making for patients with breast cancer or gastrointestinal neuroendocrine tumors (19,20). However, given the limit related to the heterogeneity of the Ki-67 PI cutoff value, Ki-67 has not become a routine pathological detection parameter for lung cancer in clinical work.

A meta-analysis including 108 studies showed that the cutoff value of Ki-67 PI was between 3% and 75% and that the cutoff value of Ki-67 PI was one of the main sources of heterogeneity (10). A study by Warth showed that in patients with NSCLC, high Ki-67 expression with a lower cutoff level indicated a poor prognosis, while opposing results were found with a higher cutoff level. Furthermore, high expression of Ki-67 has different prognostic significance in different pathological types of NSCLC. In LUAD patients, high expression of Ki-67 indicates a poor prognosis, while, in contrast, it is related to a relatively good prognosis in lung squamous cell carcinoma patients (21). Therefore, independent evaluation of the expression of Ki-67 in different pathological types of lung cancer and establishment of a unified Ki-67 PI cutoff value based on prognosis are urgently needed.

Our study found that the high expression of Ki-67 was more common in males (P=0.004) and CEA-positive patients (P=0.005), which was consistent with previous reports (10,22,23). Interestingly, some studies have shown that testosterone can promote the growth of cancer cells expressing androgen receptor (AR), while AR negatively regulates the Ki-67 level in lung cancer patients (24,25). However, the current relevant mechanism is not clear at present, and further research is needed.

In the present study, high Ki-67 expression is significantly related to notch (P=0.017), vascular convergence (P=0.044), and CTR (P<0.001) (Figure 3). Yan et al. (26) described the associations between Ki-67 PI and radiological features in patients with LUAD and found that Ki-67 was correlated with notch and nodal density (Spearman correlation coefficient was 0.554 and 0.436, respectively). This was consistent with the results of our study, but there was no correlation analysis for vascular convergence. In addition, Zhou et al. (27) found that radiologic characteristics of enhanced CT images, including inverse variance, short axis, and extension, could be used as noninvasive predictors of the Ki-67 PI status in lung cancer patients. Therefore, according to the correlations between radiological features and Ki-67 PI, we could establish a radiological predictive model for Ki-67, which is of great significance for prognostic stratification and clinical decision-making in LUAD. However, there are few related studies on the correlations between radiological features and Ki-67 PI at present. Therefore, further research is needed to provide a more sufficient reference for the establishment of the Ki-67 predictive model. 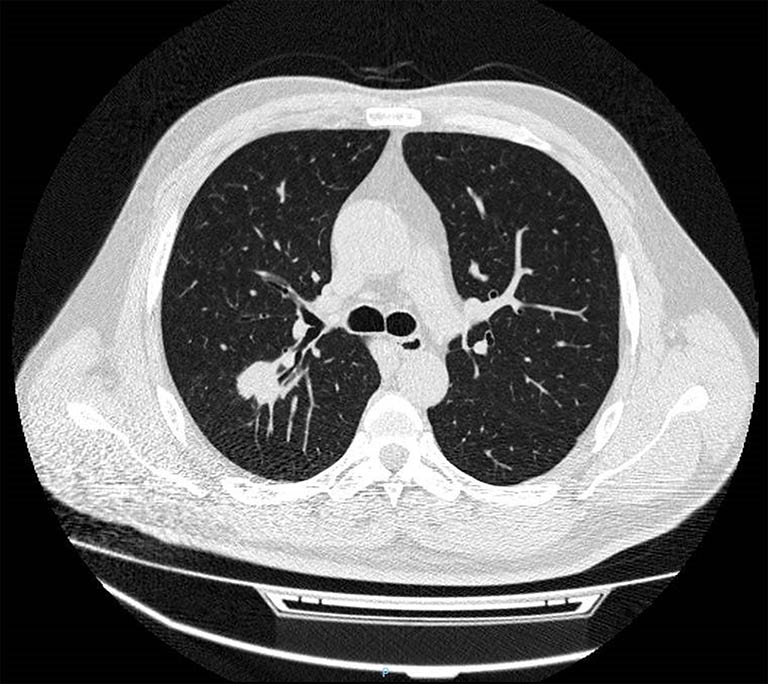 In terms of pathological features, we found that the patients with high Ki-67 expression were mostly invasive LUAD (P<0.001), with a larger tumor tissue size (P<0.001), more VPI (P<0.001), LVI (P<0.001), lymph node metastasis (P<0.001), and a higher pathological TNM stage (P<0.001), which was consistent with previous reports (10,28). Furthermore, we first analyzed the correlation between the STAS and Ki-67 PI and found that high expression of Ki-67 was significantly related to the STAS (P=0.003). The WHO classification of lung cancer proposed the concept of STAS as a new pattern of invasion in LUAD in 2015 (17), and many studies have shown that the STAS is negatively correlated with the prognosis of LUAD (29,30). These findings suggested that high Ki-67 expression could be associated with poor prognosis in patients with peripheral clinical stage IA LUAD.

This study has several limitations. First, this study is a single-center retrospective study, and selection bias is inevitable. Second, Ki-67 immunohistochemical staining has not become a routine pathological detection procedure in LUAD patients, and many patients were excluded (n=238), which might have led to selection bias. Third, the cutoff value of Ki-67 PI based on patient prognosis was not determined. Therefore, we used the median value (14%) as the cutoff value, similar to most previous studies. Fourth, the pathological data were based on review of postoperative reports, the parameters especially the Ki-67 PI could be influenced by subjectivity. While two separate pathologists were required to re-evaluated, the postoperative specimens could eliminate some of the subjectivity. Furthermore, assessing morphological features of pulmonary nodules is prone to inter and intra-observer variability. In addition, there was bias regarding the assessment knowing that these were proven tumors and the features mentioned are those that are relatively typical for malignant nodules.

Reporting Checklist: The authors have completed the STROBE reporting checklist. Available at http://dx.doi.org/10.21037/tcr-20-2608

Conflicts of Interest: All authors have completed the ICMJE uniform disclosure form (available at http://dx.doi.org/10.21037/tcr-20-2608). The authors have no conflicts of interest to declare.

Ethical Statement: The authors are accountable for all aspects of the work in ensuring that questions related to the accuracy or integrity of any part of the work are appropriately investigated and resolved. The study was conducted in accordance with the Declaration of Helsinki (as revised in 2013). The study was approved by the institutional ethics committee of China-Japan Friendship Hospital (No. 2018-13-K08). The institutional ethics committee waived the need for informed consent because of its retrospective design and the use of anonymized data.