Colorectal cancer (CRC) is an increasingly common type of cancer; it is the second-leading cause of cancer-associated death worldwide (1,2). Although much has been achieved in the past few decades in terms of early diagnosis and CTC treatment, many patients with advanced CRC still have a poor prognosis (3,4). Recurrence and metastasis are significant problems that affect the long-term survival of patients with metastatic CRC (mCRC) (5,6). Appropriate prognostic biomarkers are therefore urgently needed to predict both the risk of recurrence and patient prognosis. The biomarkers would provide clinicians with accurate information to guide their choice of appropriate therapeutic strategies for CRC patients.

Circulating tumor cells (CTCs) are often present in the blood of patients with solid tumors and travel via the bloodstream; CTCs are seeds for subsequent metastatic lesions in distant organs (7,8). Increasing evidence suggests that baseline CTC counts and dynamic changes in CTC counts are independent predictors for patients with various types of cancer, including CRC (9). As CTC detection in peripheral blood is both feasible and reliable, CTCs have attracted the interest of researchers not only as a convenient tool with which to explore the underlying mechanisms of metastasis better but as clinically relevant prognostic markers for cancer patients.

This study aimed to assess the relationship between baseline CTC counts and general measures of the immune-inflammation index, namely, NLR and PLR. We further determined if baseline CTC counts in combination with NLR and PLR were associated with clinical outcomes in CRC patients. We present the following article in accordance with the STROBE reporting checklist (available at http://dx.doi.org/10.21037/tcr-20-2032).

Between 1 January 2014 and 31 December 2017, 118 patients that attended the Affiliated Zhongshan Hospital of Dalian University were enrolled in this retrospective study. Of these patients, 72 had resectable CRC and had undergone radical resection, and 46 had mCRC and had received first-line therapy. The study methodologies conformed to the provisions of the Declaration of Helsinki (as revised in 2013). This study was reviewed and approved by the Human Ethics Review Committee of the Affiliated Zhongshan Hospital of Dalian University (Protocol: 2020011; 2015032). All participants signed written informed consent. Of the 118 patients, 76 were male, and 42 were female. The age range was 36–89 years, and the median age was 63 years. Inclusion criteria were the following: (I) histologically confirmed CRC; and (II) adequate hematologic, hepatic, renal, and cardiac function. Exclusion criteria were the following: (I) patients who suffered perioperative or non-tumor-related death; (II) patients with severe bone marrow suppression following chemotherapy; (III) patients with autoimmune diseases, blood diseases, or infections; (IV) a history of other types of malignant tumors; (V) patients on long-term oral anticoagulants; and (VI) patients with severe cardiopulmonary diseases.

All patients were followed up at outpatient clinics and by telephone from the date of blood collection. A total of 4 patients who underwent radical resection were lost to follow-up; the rate of loss to follow-up was 3.39% (4/118). The follow-up deadline was 30 October 2018, and the median follow-up time was 25.4 months. The primary follow-up endpoint was disease-free survival (DFS) and progression-free survival (PFS). The participants’ therapeutic response was assessed according to the American Joint Committee on Cancer (AJCC), the seventh edition.

CTC detection was performed using the CellSearch System, as described in previous literature (14). In brief, 6.5 mL of buffer was added to a specimen for dilution, then centrifuged at 800 g for 10 min. It was then observed whether the plasma and red blood cells had separated in the sample tube. Following this, the supernatant was removed, magnetic beads conjugated with specific antibodies were added, and the samples were incubated for 20 min in a Magnest Cartridge. Fluorescently labeled with leukocytes marker (CD45) and epithelial cells marker (cytokeratin 8, 18, 19 and EpCAM) monoclonal antibodies were used to distinguish epithelial cells from leukocytes. CTCs were defined as nucleated cells with negative expression of CD45 and positive expression of cytokeratin and EpCAM. All magnetized specific antibodies not bound to CTCs were then washed off, and the enriched cells were re-enriched. Finally, cell fluorescence staining was performed using CellTracks Analyzer. Two professionals interpreted the results.

Comparison of CTC counts, the immune-inflammation index and clinical features

Between January 2014 and December 2017, 118 patients newly diagnosed with CRC at the Affiliated Zhongshan Hospital of Dalian University were enrolled in this study, including 72 (61%) resectable CRC patients and 46 (39%) mCRC patients. The follow-up deadline was 30 October 2018, and the median follow-up time was 25.4 months. Of the 118 participants, 4 resectable CRC patients were lost to follow-up, the rate of loss to follow-up being 3.39%. The baseline variables tested were age, sex, tumor localization, and TNM (tumor, nodes, metastases) stage, metastatic sites, and therapeutic strategies. Of the resectable CRC cohort, 17 patients (24%) were positive for CTCs, and 55 (76%) were negative for CTCs (Table 1). Positive CTC status was significantly associated with stage III cancer (P=0.035) and N+ status (P=0.025). There were no significant differences between CTC counts and measures of the immune-inflammation index, being NLR and PLR in the resectable cohort. 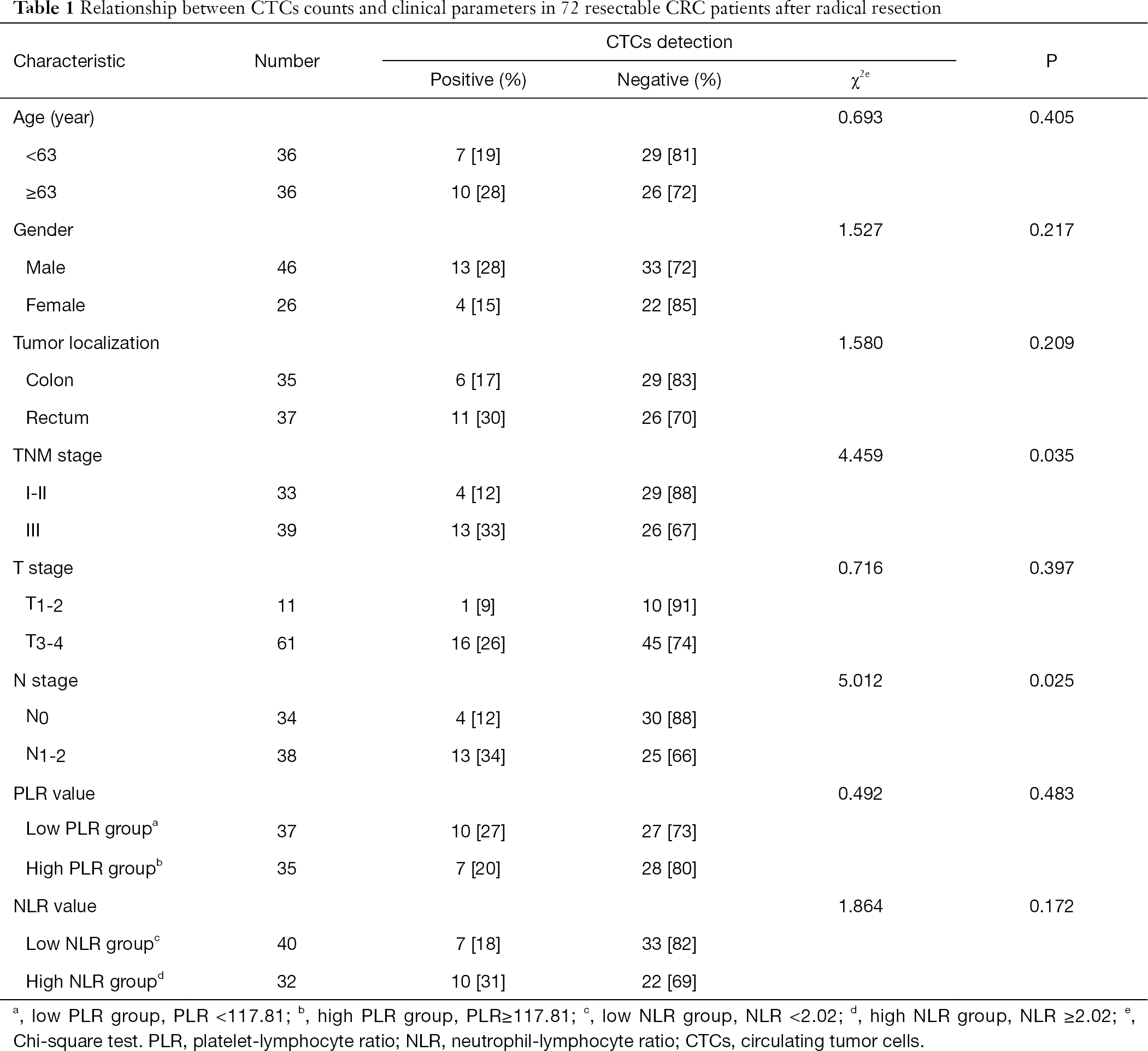 Of the mCRC cohort, 48% (22/46) were positive for CTCs, which was notably higher than in resectable patients. Additionally, positive CTC status was associated with advanced age (≥63 years old; P=0.037), a high PLR value (P=0.008), and a high NLR value (P=0.034). However, CTC counts were not correlated with age, sex, tumor localization, metastatic sites, or therapeutic strategies (Table 2). 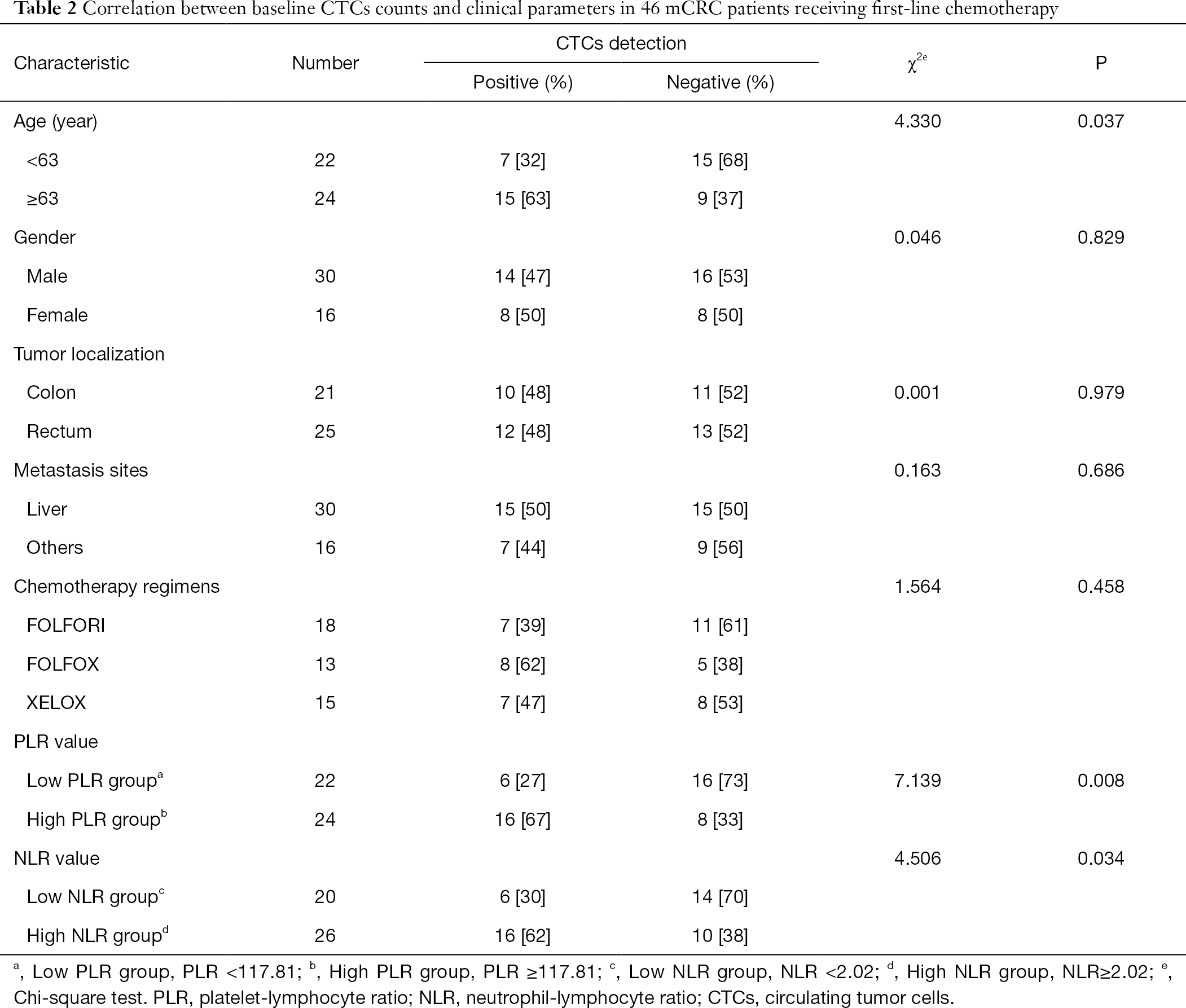 Relationship between CTC counts and the immune-inflammation index

To assess the potential value of the immune-inflammation index in CTC detection, we further analyzed the correlation between CTC counts and two measures of the index, NLR and PLR. A significant positive correlation was found between CTC counts and PLR in the resectable CRC population (P=0.011) (Figure 1A), though CTC counts were not positively correlated with NLR (P=0.079) (Figure 1B). However, in the mCRC cohort, CTC counts were positively correlated with both NLR (P=0.001) and PLR (P<0.001) (Figure 1C,D). 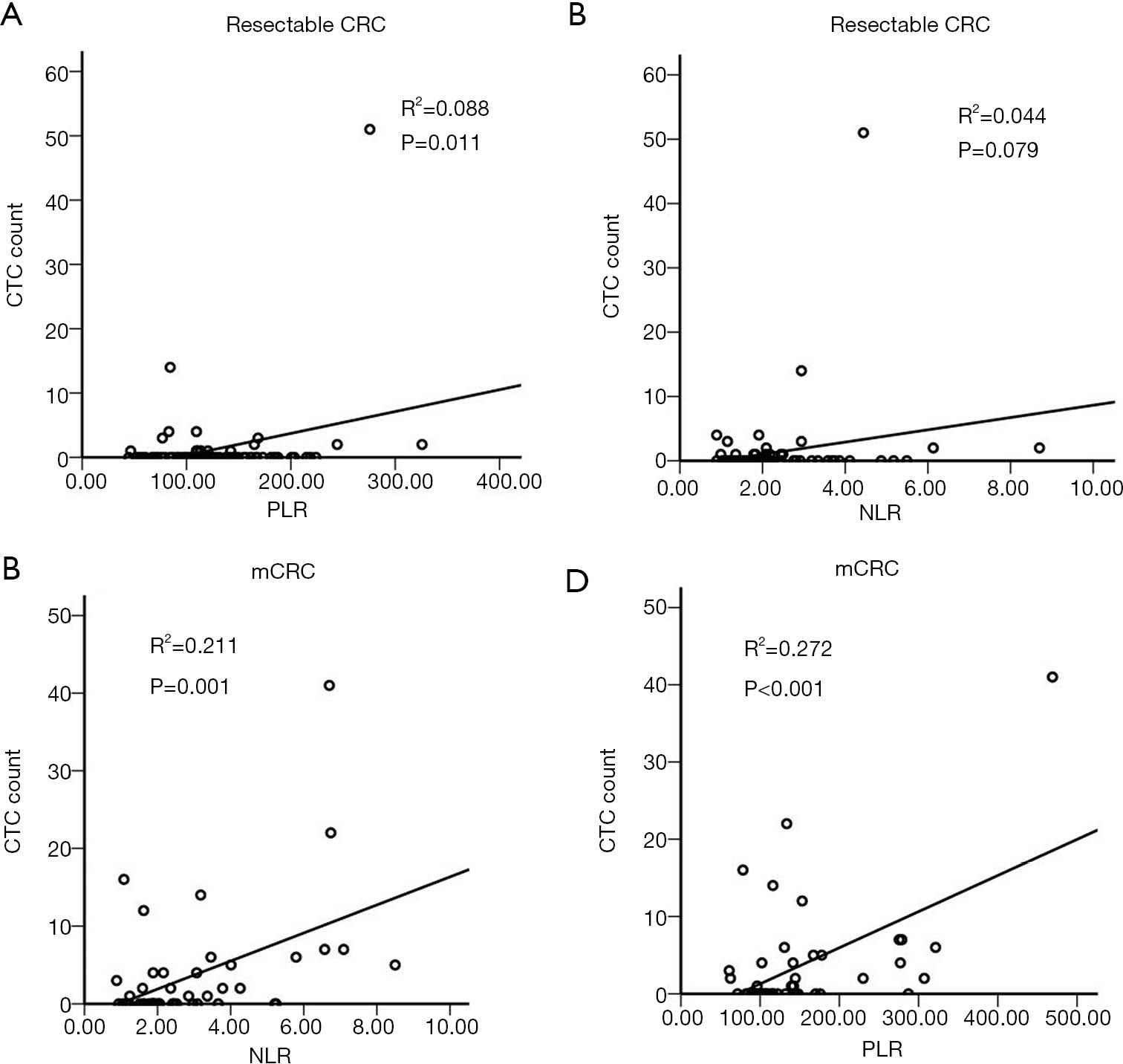 Next, we assessed the prognostic value of baseline CTC counts in patients with CRC. The median follow-up time of the entire study population was 25.4 months. Of the resectable CRC patients, 15 of the 72 (21%) relapsed or developed metastasis following radical resection. Positive CTC detection was not associated with worse DFS in the resectable CRC cohort (CTC positive: 28±1.5; CTC negative: 30±2.7 months; P=0.258) (Figure 2A). Of the mCRC patients, 43 of the 46 (93%) had to disease progression following first-line therapy. There was a significant difference in PFS between the CTC positive and CTC negative mCRC patients (CTC positive: 2.5±0.3 months; CTC negative: 6±0.5 months; P=0.011) (Figure 2B). This data suggests that CTC counts could predict whether mCRC patients show a therapeutic response to first-line therapy.

We further evaluated the prognostic value of baseline NLR and PLR in CRC patients. The corresponding optimal cut-off values for NLR and PLR, as determined by ROC curves, were 2.02 and 117.81, respectively. Participants were then separated into a high NLR group (≥2.02), a low NLR group (<2.02), a high PLR group (≥117.81), and a low PLR group (<117.81). For the resectable CRC cohort, there was no significant difference in DFS based on Kaplan-Meier curves stratified for either NLR (P=0.073) or PLR (P=0.166) (Figure 3A,B). However, a worse PFS in mCRC patients was associated with high NLR values (P=0.005) and high PLR values (P=0.027) (Figure 3C,D). These findings demonstrated that NLR and PLR are potential predictive markers for mCRC patient prognosis. 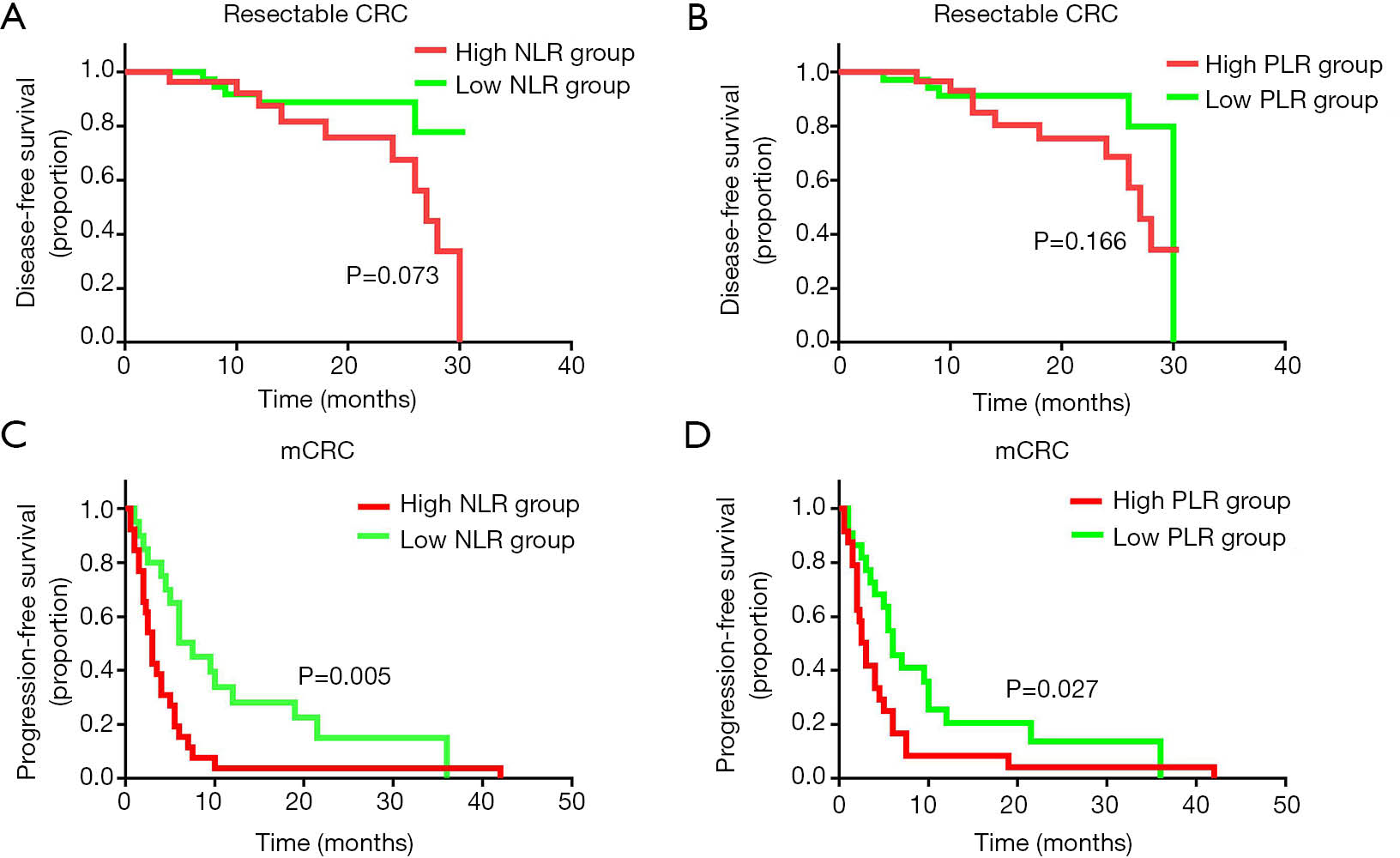 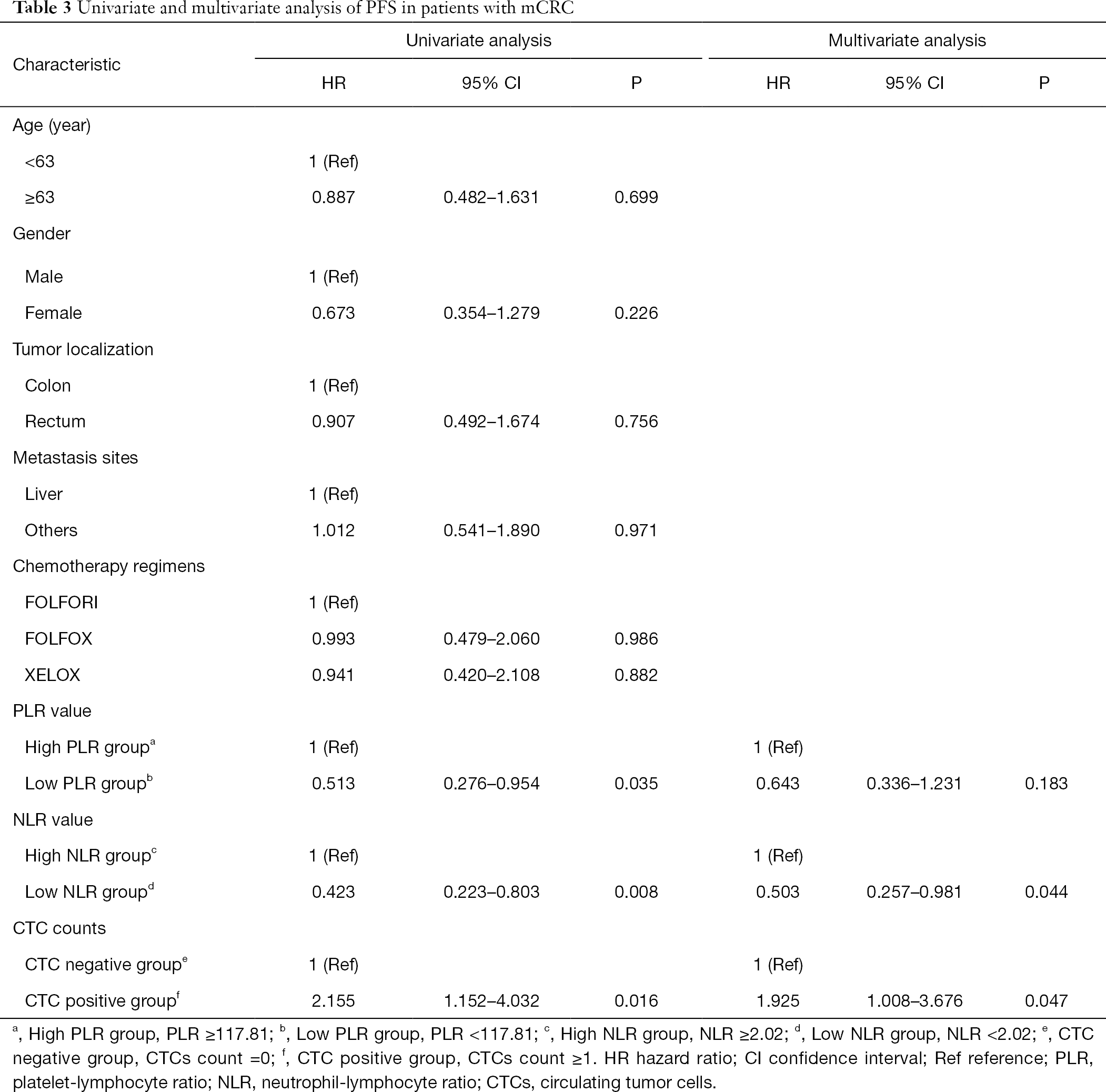 Several clinical variables have been reported to predict survival outcomes of CRC patients, including TNM stage and performance status (PS) score. However, the prediction and assessment of relapse risk in patients with occult metastases using imaging techniques and serum tumor marker detection remain difficult. A convenient and dynamic method of predicting relapse risk and monitoring therapeutic responses are therefore urgently needed. Previous retrospective studies have shown that CTCs is an independent prognostic marker for CRC patients (15). Inflammation induces systemic changes within the cancer microenvironment that promote tumor progression, and CTCs may be directly involved in this inflammation process (16). Therefore, CTC detection used in combination with the immune-inflammation index may lead to more accurate predictions of therapeutic response and prognosis. In the present study, we found for the first time that baseline CTC counts, together with NLR, were independent prognostic factors for patients with mCRC.

The molecular mechanisms by which CTC populations promote metastasis to a determined distant site are poorly understood. Theoretically, CTCs that leave the primary tumor site will be more vulnerable to attack by immune cells; the survival of CTCs in vessels might be the “Achilles’ heel” of metastasis (17). Recent publications have shown that some CTCs closely interact with blood cells, such as neutrophils, platelets, and monocytes, to survive in the bloodstream (13,18). It has been reported that neutrophils promote adhesion and metastases seeding of distant organ sites by secreting circulating growth factors, while lymphocytes play an essential role in tumor defense by inhibiting tumor cell proliferation and migration (19). Other studies have indicated that platelets induce the epithelial-mesenchymal transition process of CTCs, promoting extravasation to metastatic sites (20). In the present study, we found that CTC counts were positively associated with the immune-inflammation index (as measured by NLR and PLR) in mCRC patients, and that baseline CTC counts, together with NLR, were independent prognostic factors for mCRC patients. These results are consistent with previous studies that investigated breast and gastric cancer. The interaction of CTCs with the blood microenvironment is crucial to the development of new metastatic sites, which makes these interactions a potential target for novel treatment strategies.

This study was affected by the limitations that come with retrospective studies. We found that baseline CTC counts, NLR, and PLR were potential predictive markers for mCRC patients, but not for resectable patients, and we found no evidence that mCRC patients could benefit from chemotherapy. These findings were not in agreement with other studies. Additionally, the CTC positive rate was 24% in the resectable cohort, and 49% in the mCRC cohort, which was lower than other studies have previously reported. There are three possible explanations for these discrepancies. Firstly, even though the sample size of this study was 118, there were only 46 cases of mCRC (39%), far fewer than those with resectable CRC (61%). Secondly, our study was a retrospective single-center study. Finally, the participants had received a variety of treatments, including single chemotherapy treatment, chemotherapy and radiation, and other chemotherapy treatments combined with targeted therapy. These results may explain why we did not find that therapy regimens were significantly associated with PFS.

It is important to note that this study exhibited the several limitations of retrospective studies conducted at a single center with a smaller sample size. Moreover, in the subgroup analyses, it was impossible to obtain significant results due to the small sample size of this present study. Therefore, our findings require validation with large-scale, multicenter, controlled clinical studies.

CTC detection and NLR can be used as prognostic biomarkers for mCRC. CTC counts are significantly correlated with NLR and PLR, particularly in mCRC patients. The low cost, dynamic collection and ready accessibility to tools with which to assess CTC counts and NLR make these promising prognostic factors for mCRC. The relationship between CTCs and NLR requires further investigation in more extensive clinical trials. Such trials may contribute to the development of new prognostic models for mCRC.

Reporting Checklist: The authors have completed the STROBE reporting checklist. Available at http://dx.doi.org/10.21037/tcr-20-2032

Conflicts of Interest: All authors have completed the ICMJE uniform disclosure form (available at http://dx.doi.org/10.21037/tcr-20-2032). The authors have no conflicts of interest to declare.

Ethical Statement: The authors are accountable for all aspects of the work in ensuring that questions related to the accuracy or integrity of any part of the work are appropriately investigated and resolved. The study methodologies conformed to the provisions of the Declaration of Helsinki (as revised in 2013). This study was approved by the Ethics Committee of The Affiliated Zhongshan Hospital of Dalian University (Protocol: 2020011; 2015032). Signed written informed consent was obtained from the patient who was collected the blood sample.