Cervical squamous cell carcinoma (CSCC) is a common cancer; it is the fourth most frequently diagnosed cancer and fourth leading cause of cancer-related death in women (1). Although many novel treatment methods and technologies have been used in CSCC, the clinical outcomes of patients have not been satisfactory (2). Some studies have reported that the 5-year overall survival of CSCC patients is still less than 17% (3). In addition, specific and efficient treatments are lacking. Therefore, there is an urgent need to explore the mechanisms underlying CSCC.

Hsa_circ_0065898, located in the chromosomal region 3p21.2, is also known as circDCAF1. However, the molecular mechanism of hsa_circ_0065898 in CSCC remains unclear. In this study, we showed that circDCAF1 promoted CSCC proliferation and invasion, and constructed a regulatory network of circRNA targeting miRNAs-mRNAs. This study provides evidence for the treatment and pathogenesis of CSCC. We present the following article in accordance with the MDAR reporting checklist (available at http://dx.doi.org/10.21037/tcr-20-2808).

The workflow was shown in Figure 1. 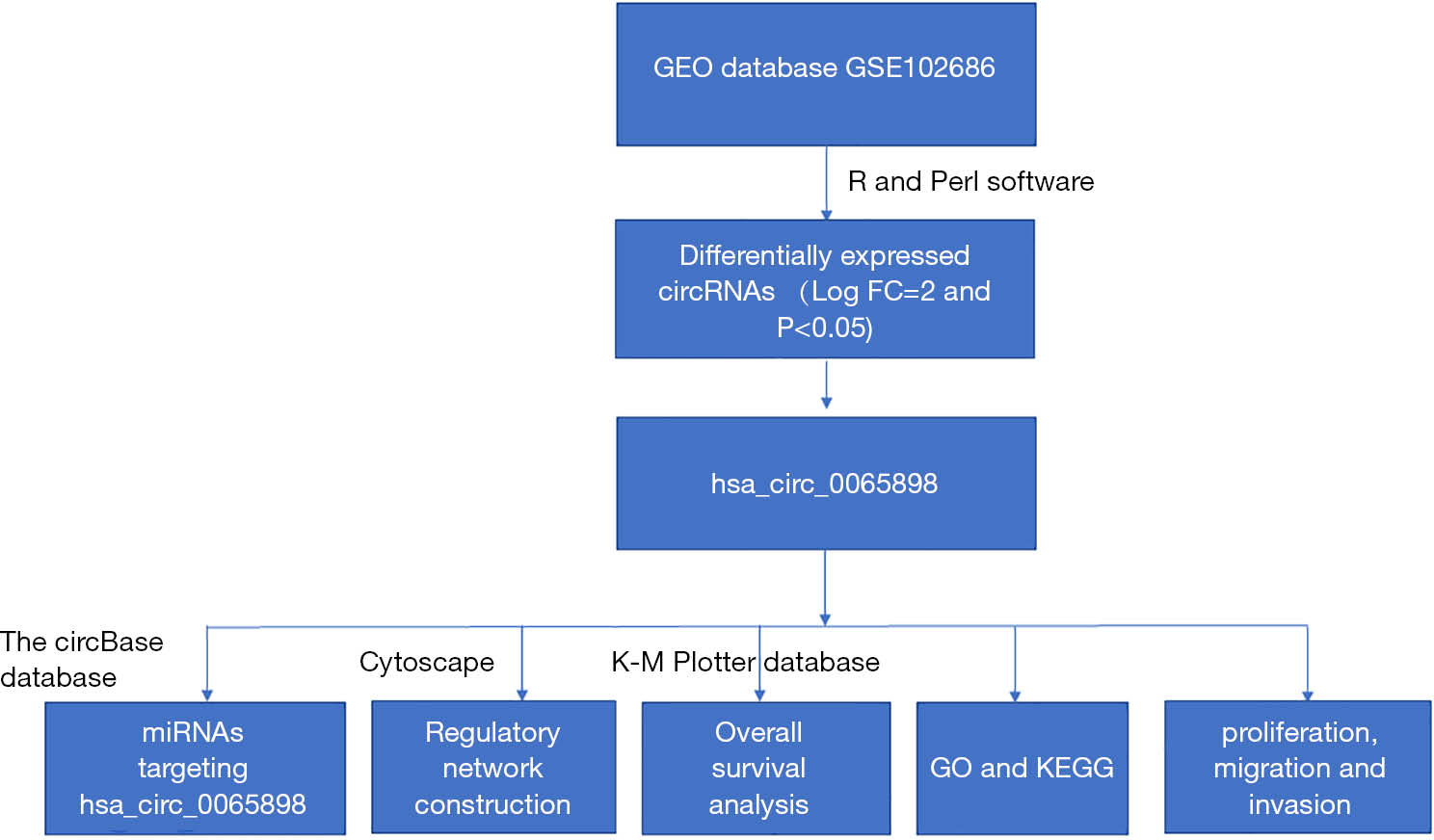 Figure 1 The flow diagram of this work.

miRNAs targeting hsa_circ_0065898 were obtained from the circBase database (http://www.circbase.org/). The miRNAs are shown in an miRNA txt file. miRNA expression validation and association with prognosis of CSCC were downloaded from the online Kaplan-Meier (KM) Plotter (http://kmplot.com/analysis/). The genes targeted by miRNAs were predicted using miRDB.tsv, miRTarBase.tsv, and TargetScan.tsv. The regulatory network of circRNA-miRNAs-mRNAs and hub genes was constructed using Cytoscape software 3.6.0 (13,14). The CytoHubba application, a Cytoscape plugin, was used to select hub genes (15).

The KM plotter database is capable in assessing the effect of genes and miRNAs on survival in 21 cancer types. The miRNA subsystems include 21 different cancer types. The primary purpose of the KM plotter is a meta-analysis-based discovery and validation of survival biomarkers (16). KM plotter was used to assess the prognostic value of microRNAs in CSCC. All cases were classified into a low expression group and a high expression group. KM survival plots, the hazard ratio (HR), 95% confidence interval (CI), and log rank P value were automatically shown on the webpage. A log rank P value <0.05 was considered statistically significant.

A CSCC cell line (SiHa) was purchased from the company Cosmo Bio (Tianjin, China). SiHa cells were cultured in F-12K and DMEM-H (Gibco, USA). All cells were cultured at 37 °C for 18–24 h in a humidified incubator containing 5% CO2. The expression level of hsa_circ_0065898 was tested by quantitative PCR (qPCR), as described in a previous study (7).

To examine cell proliferation, migration and invasion ability, we conducted a transwell and CCK-8 assay as described previously (17).

The hsa_circ_0065898 expression and difference of data in different groups were investigated by t-test or one-way ANOVA followed by Tukey’s test, using GraphPad Prism 6.0 software (GraphPad Inc., La Jolla, CA, USA). Survival analysis was performed using the KM plotter database. P<0.05 was considered significant (*, P<0.05; **, P<0.01; ***, P<0.001). The study was conducted in accordance with the Declaration of Helsinki (as revised in 2013). 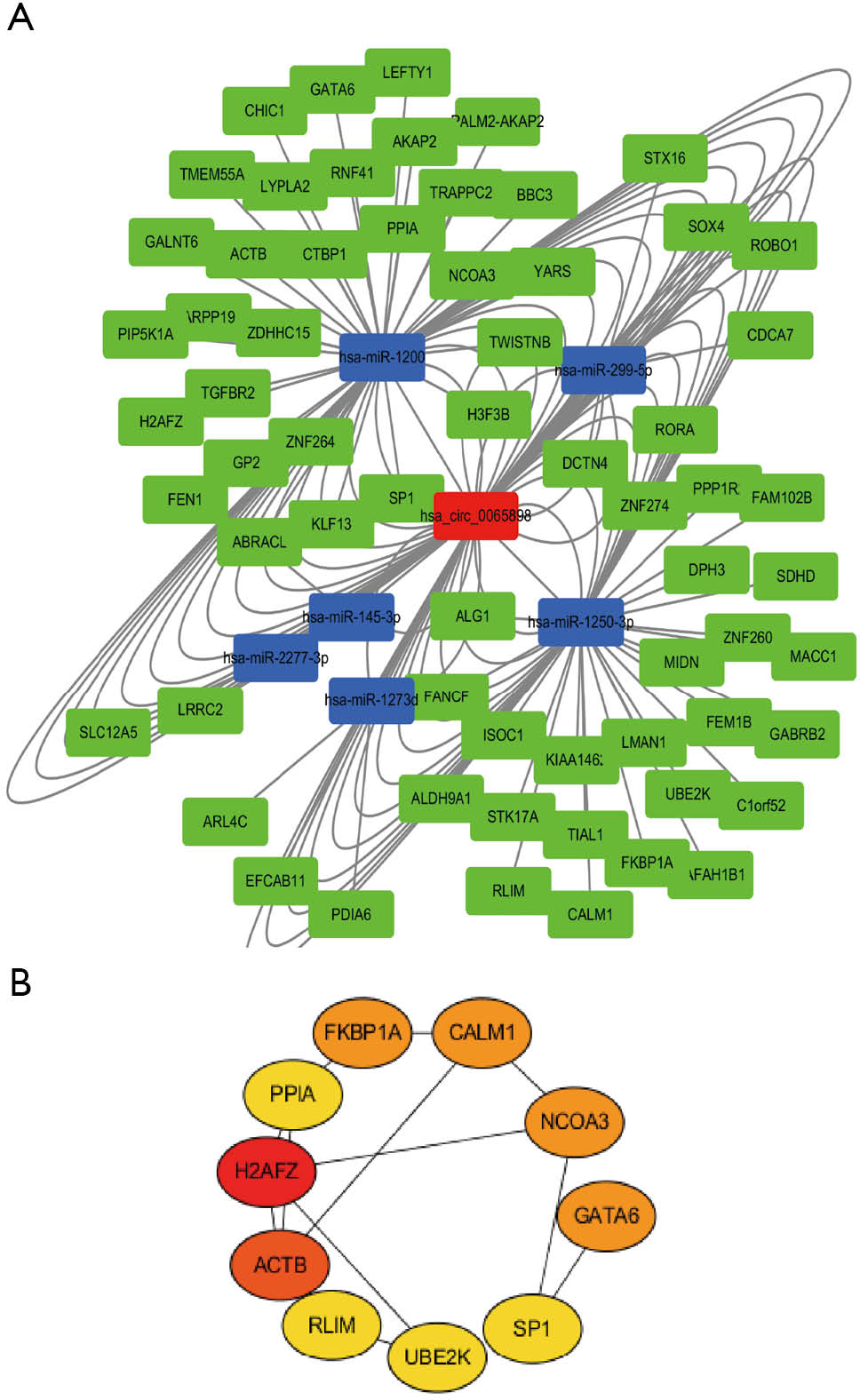 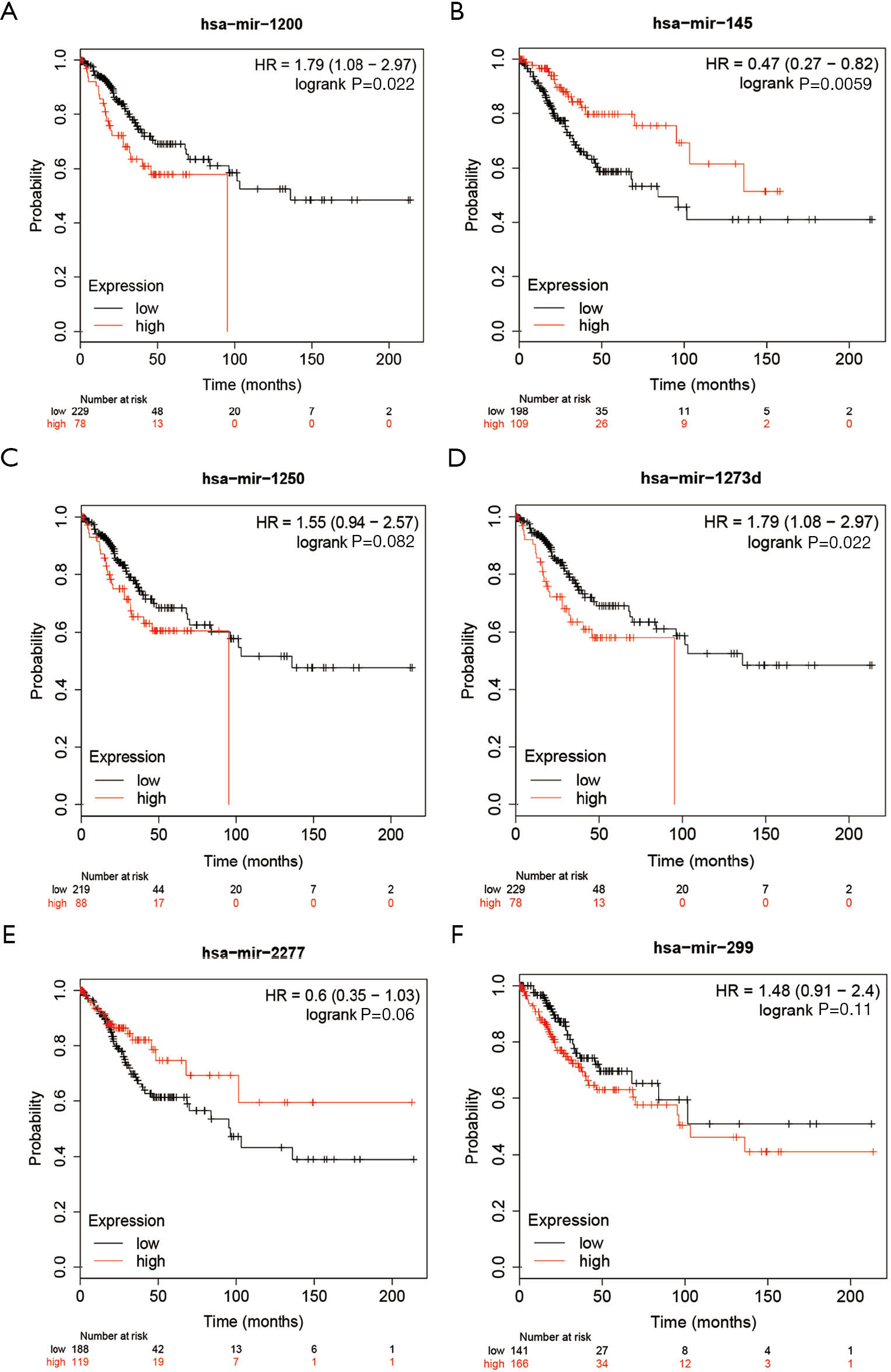 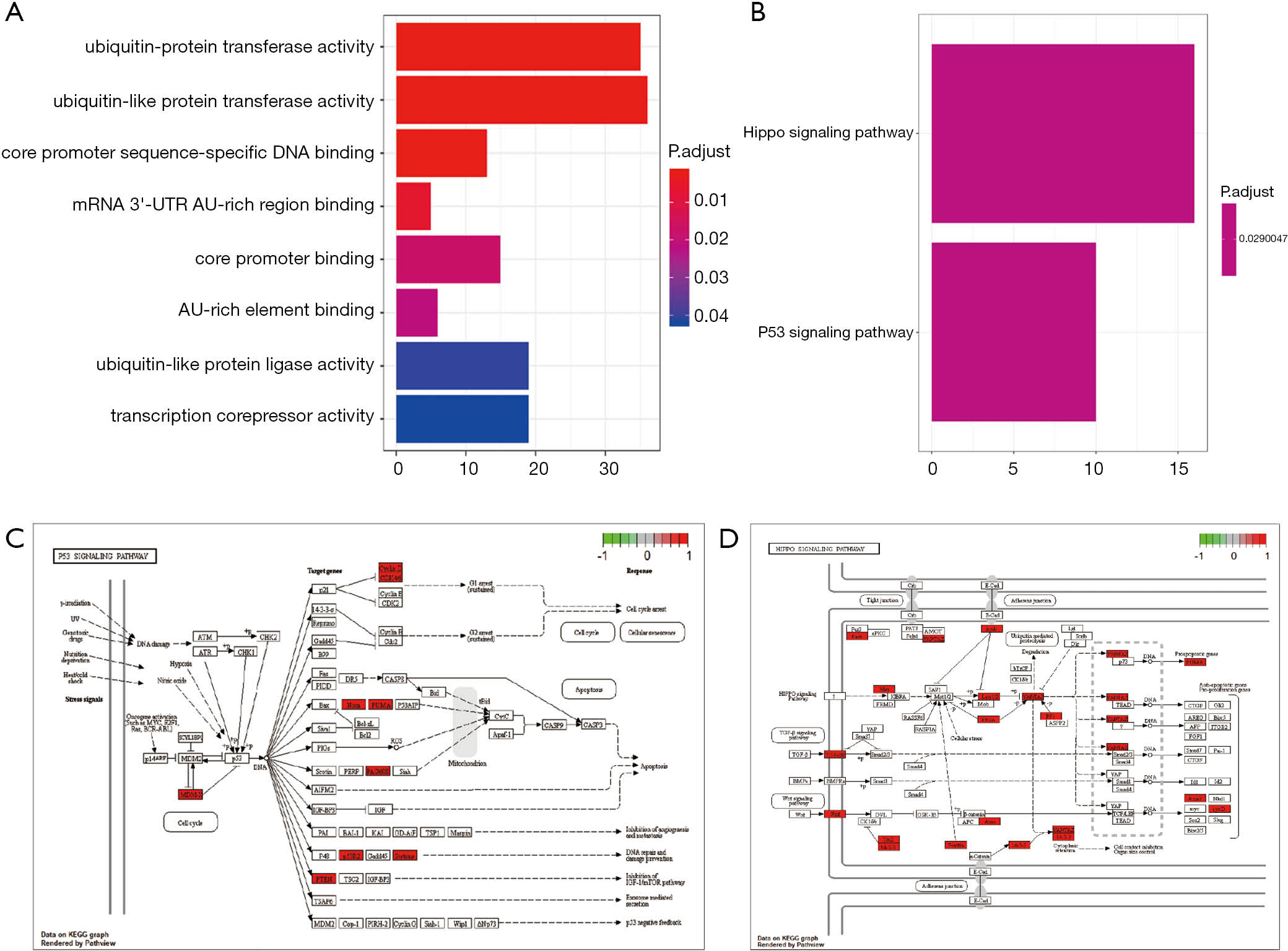 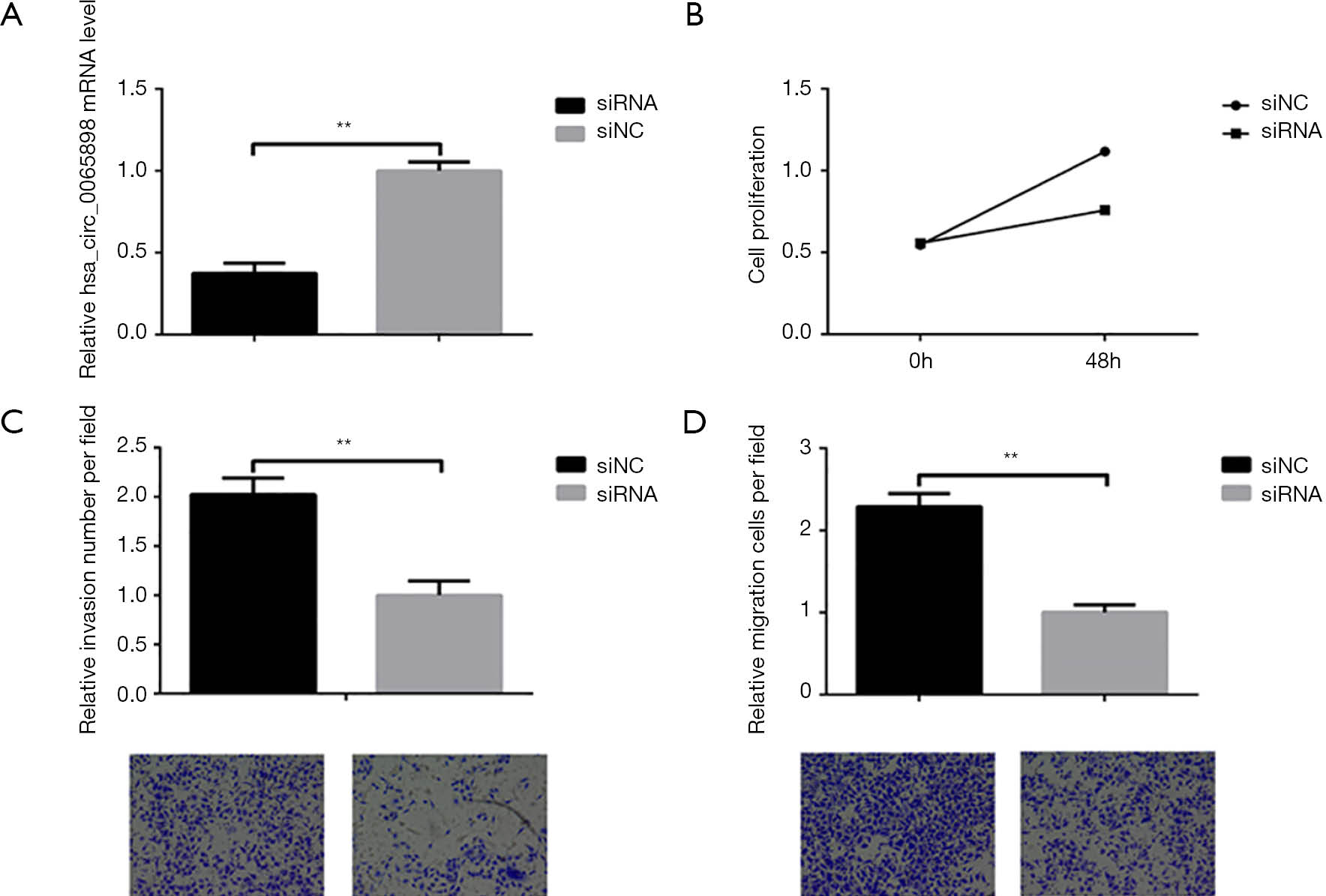 Cervical cancer is the second most prevalent cancer in women worldwide (19). CSCC accounts for a signiﬁcant proportion of cervical cancer. The underlying mechanism of CSCC remains unclear. Thus, there is a need for novel diagnostic biomarkers for CSCC.

To further analyze the role of hsa_circ_0065898 in CSCC pathogenesis, we used the online circBase database to explore the direct interaction of hsa_circ_0065898 with miRNAs. Hsa-mir-1200, hsa-mir-145, hsa-mir-1250, hsa-mir-1273d, hsa-mir-2277, and hsa-mir-299 were the top 6 miRNAs selected to construct the regulatory network. hsa-mir-1200 showed low expression in osteosarcoma cells (23), and it played a role in arterial and venous endothelial cells exposed to gestational diabetes mellitus (24). hsa-mir-1200 showed a negative correlation with the grade of neuroendocrine tumor biology of the lung (25). This study found that hsa-mir-1200 was significantly associated with poor survival. hsa-mir-145 affected circular RNA expression in prostate cancer (26), glioblastoma cell (27), bladder cancer (28,29), and colorectal cancer (30). In CSCC, we showed that hsa-mir-145 overexpression had a better overall survival. hsa-mir-1250, hsa-mir-1273d, hsa-mir-2277, and hsa-mir-299 play roles in many diseases (31-33).

Kong et al. also found that the Hippo pathway played an important role in CSCC (39). In addition, we studied the main genes of the Hippo and p53 pathways, MST1, LATS1, LATS2, and P53, and found that they were associated with immune cell infiltration in CSCC.

In conclusion, the present study identified differentially expressed circRNAs and found that hsa_circ_0065898 could promote CSCC cell proliferation and invasion. We explored the regulatory network of hsa_circ_0065898 targeted miRNAs and genes, and our study provides more insights into the role of hsa_circ_0065898 in cervical cancer progression.

This study identified differentially expressed circRNAs and constructed the regulatory network of hsa_circ_0065898 targeting microRNAs and mRNAs. We demonstrated that hsa_circ_0065898 promoted CSCC cell proliferation, migration, and invasion. Hence, hsa_circ_0065898 might be useful as a biomarker for CSCC diagnosis and targeted therapy.

This manuscript has been released as a pre-print at Research Square. https://www.researchsquare.com/article/rs-29331/v1.

Reporting Checklist: The authors have completed the MDAR reporting checklist. Available at http://dx.doi.org/10.21037/tcr-20-2808

Conflicts of Interest: All authors have completed the ICMJE uniform disclosure form (available at http://dx.doi.org/10.21037/tcr-20-2808). The authors have no conflicts of interest to declare.