Breast cancer is the most commonly diagnosed cancer (11.6%) and the leading cause of cancer death (6.6%) among females worldwide (1). Different subtypes of breast cancer have distinct risk profiles and prognosis (2). Approximately 20% of breast cancer patients are human epidermal growth factor 2 (HER2)-positive, which was known to have a poorer prognosis before the development of targeted therapies (3).

Two studies have estimated that approximately 40.5% (10) and 29.8% (11) of patients with HER2-positive EBC received trastuzumab therapy in China. Jiangsu was one of the provinces with the highest rates of adjuvant trastuzumab therapy (11). Since both studies were conducted after 2012, we assumed that medical insurance coverage for trastuzumab in Jiangsu contributed to its widespread use. Therefore, the current study aims to investigate the current use of trastuzumab in patients with EBC, and to examine the changes caused by medical insurance coverage for trastuzumab in Jiangsu, China. We present the following article in accordance with the MDAR reporting checklist (available at http://dx.doi.org/10.21037/tcr-20-3329).

This study was a retrospective, multicenter clinical study with follow-up data. It covered seven representative hospitals in seven cities in Jiangsu province. The study was based on data extracted from patients’ hospital records in 2010, 2011, and 2013 to avoid interference. The participating hospitals are listed in Table S1. The study was conducted in accordance with the Declaration of Helsinki (as revised in 2013). The study was approved by the ethics committee of the First Affiliated Hospital with Nanjing Medical University (Jiangsu Province Hospital, No.: 2018-SR-205). Informed consent form was signed by every patient.

This study included patients diagnosed with HER2-positive EBC. Patients had to meet the following criteria for enrollment: aged ≥18 and ≤85 years; were diagnosed with HER2-positive breast cancer on the basis of a pathological report after breast surgery or core needle biopsy; had undergone surgery for breast cancer and received related treatments; had been staged lower than T4N3M0. Patients who had inflammatory breast cancer, developed metastatic disease, or had pre-invasive carcinoma were excluded. All patients included in the study met the HER2-positive diagnostic standard (either HER2 gene amplified by fluorescent in situ hybridization or 3+ by immunohistochemistry) according to the American Society of Clinical Oncology/College of American Pathologists clinical practice guidelines (12). The eligible patients were divided into two groups: the trastuzumab group and the non-trastuzumab group. The different characteristics between the two groups were analyzed.

All continuous variables were presented as the mean ± standard deviation (SD). Levene’s test was used to test the homogeneity of variance. Categorical data and proportions were analyzed using the χ2 or Fisher’s exact test, whereas continuous variables were analyzed using the Student’s t-test (normally distributed) or the Mann-Whitney U test (non-normally distributed). The variables that attained a P value of <0.10 by univariate analysis were entered into a multivariate logistic regression model. Multivariate logistic regression analysis was used to identify the factors influencing the use of targeted therapy, and the results were expressed as odds ratio (OR) and 95% confidence interval (CI). The Kaplan-Meier method was used to identify the differences in overall survival between the trastuzumab group and the non-trastuzumab group. All statistical tests were 2-sided, and P<0.05 was considered statistically significant. SPSS 23.0 (IBM Corp., Armonk, NY) was used for the analyses.

A total of 641 patients (mean age 51.01±10.79 years) were enrolled in the study (Figure 1). All of them were diagnosed with HER2-positive EBC. Detailed baseline demographics for patients included in the analysis are presented in Table 1. Among all patients included, trastuzumab therapy was given to 214 (33.39%) patients. Only 8 patients received trastuzumab as a neoadjuvant therapy. A total of 412 (64.27%) patients had medical insurance. 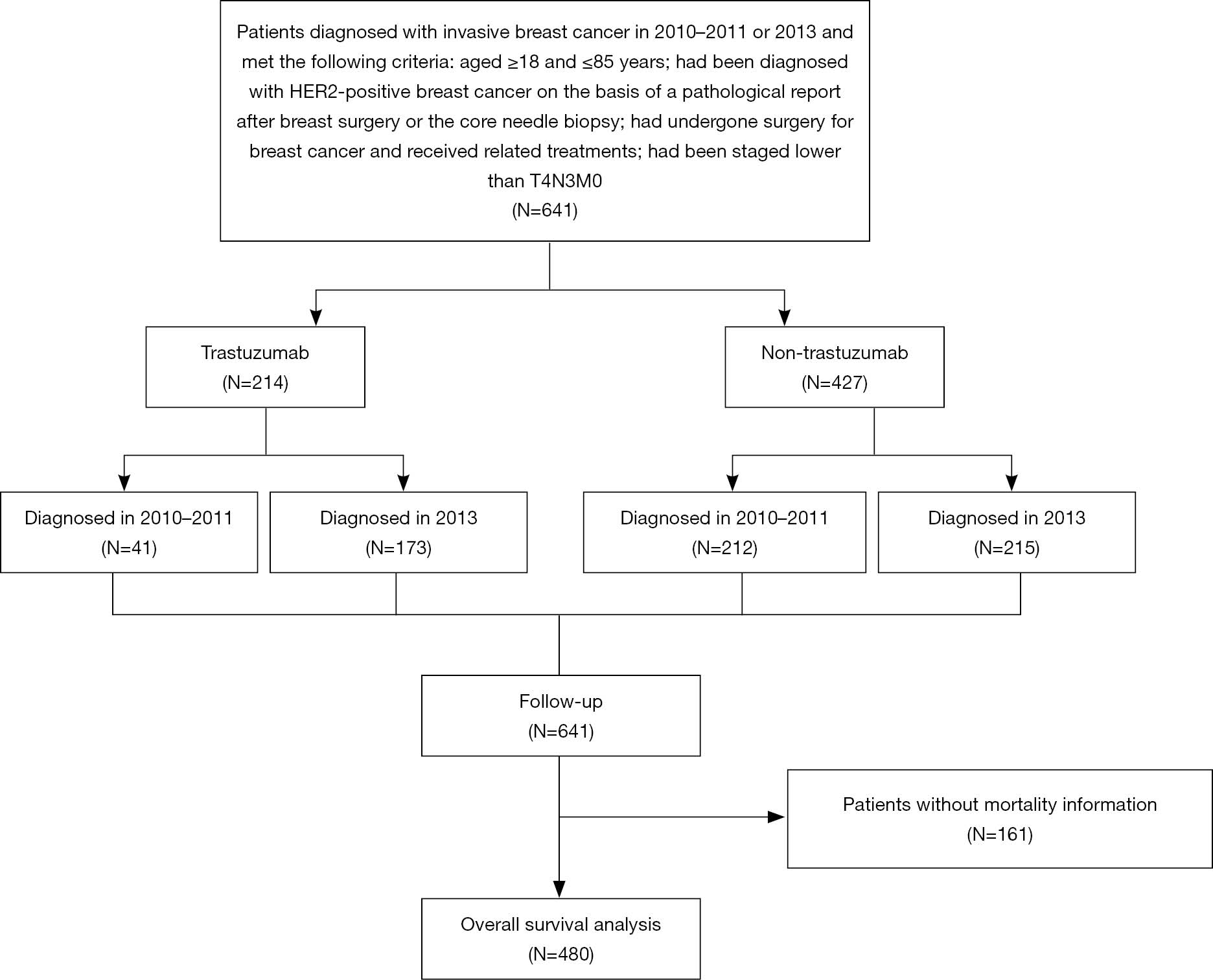 Figure 1 The flow chart of the patients included in the study.

Univariate analysis of factors associated with trastuzumab use

Univariate analysis revealed that patients who received trastuzumab therapy and those who did not receive trastuzumab therapy differed significantly in regard to the following factors: age, menstrual status, medical insurance, lymph node stage, and radiotherapy (all P<0.05, Table 2). Patients who were younger, premenopausal, had medical insurance, had more lymph node involvement, and received radiotherapy were more likely to receive trastuzumab therapy. There was no significant difference between the two groups in body mass index (BMI), primary tumor stage, molecular subtype, or adjuvant endocrine therapy (Table 2). 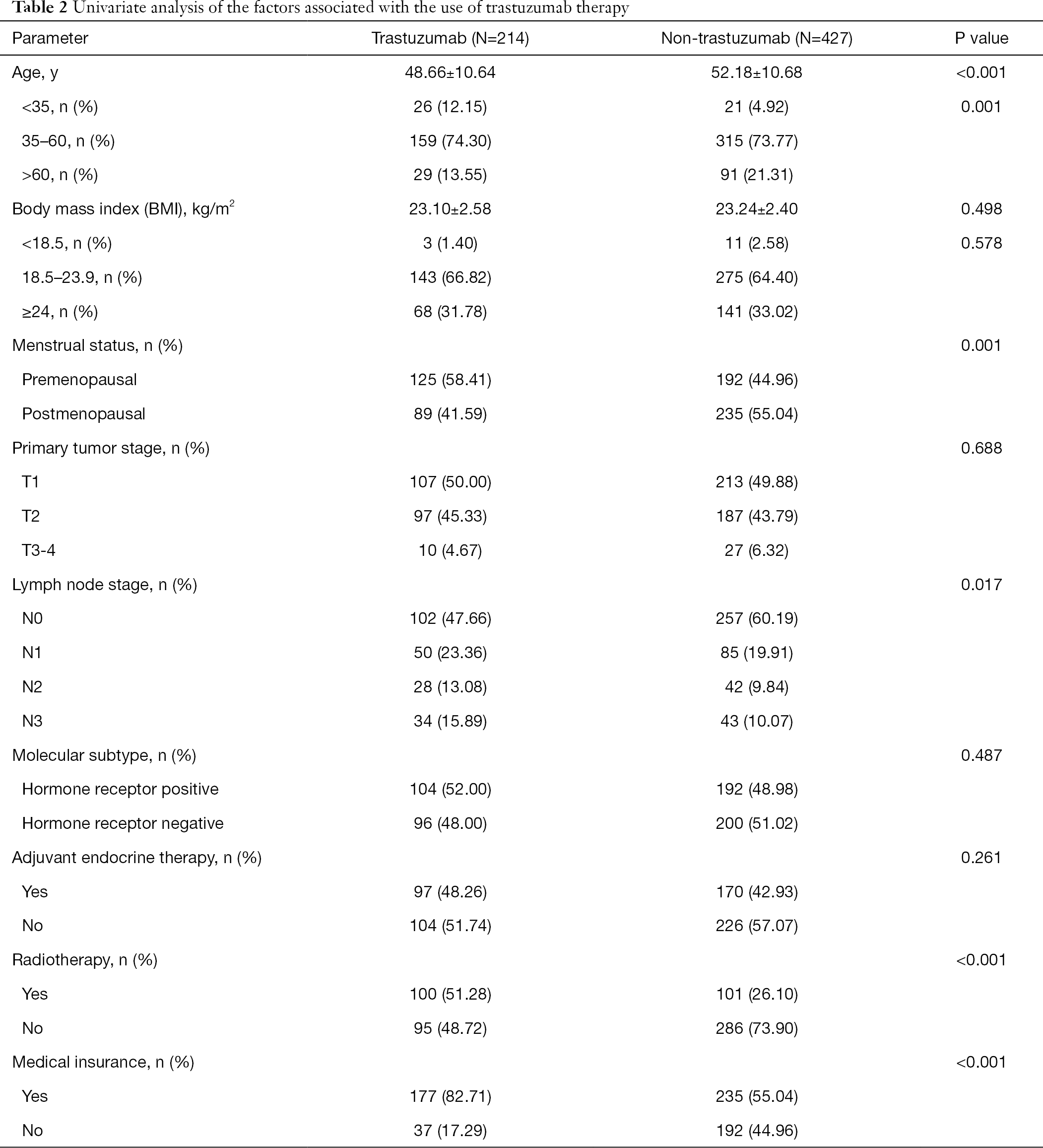 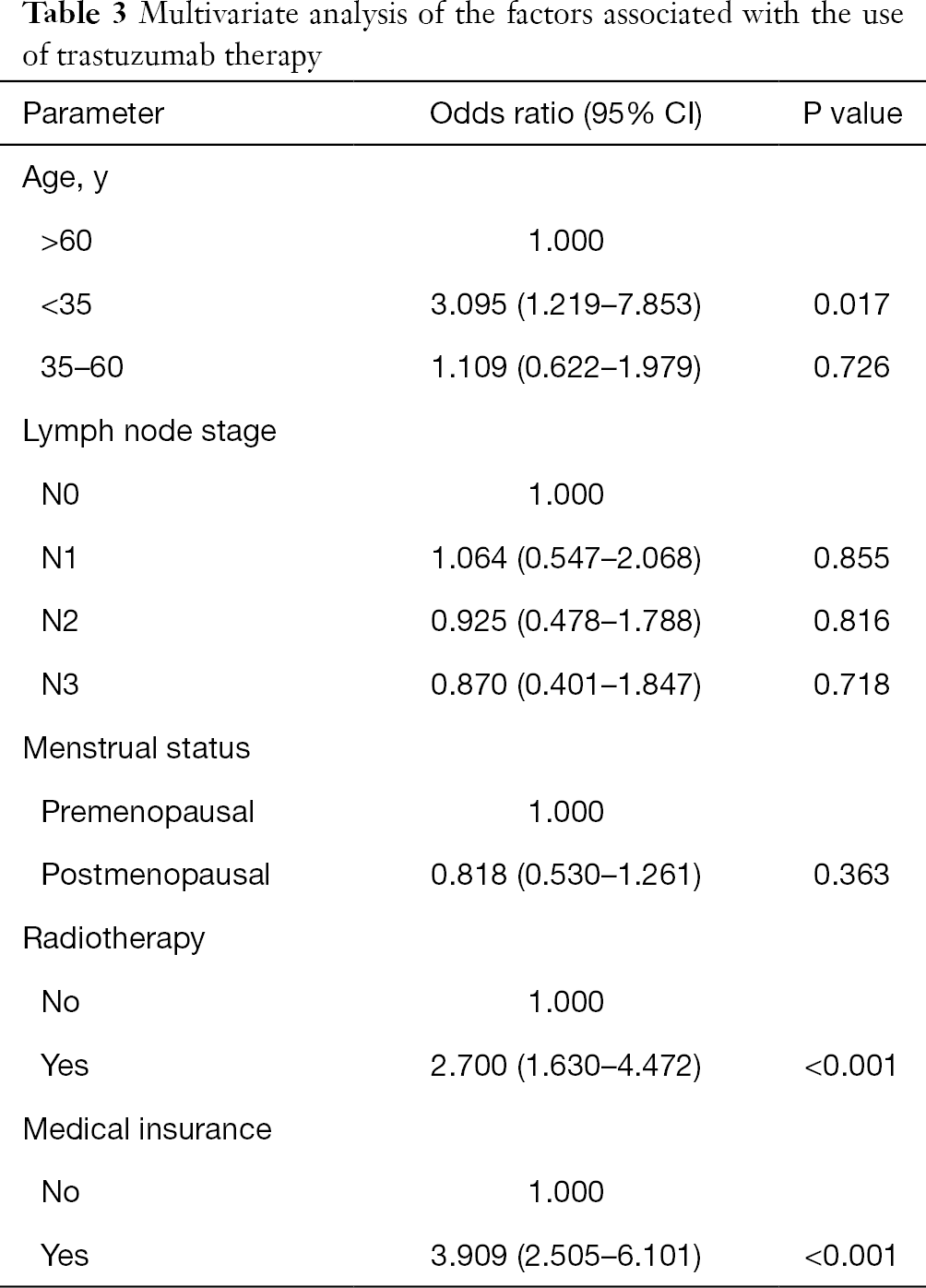 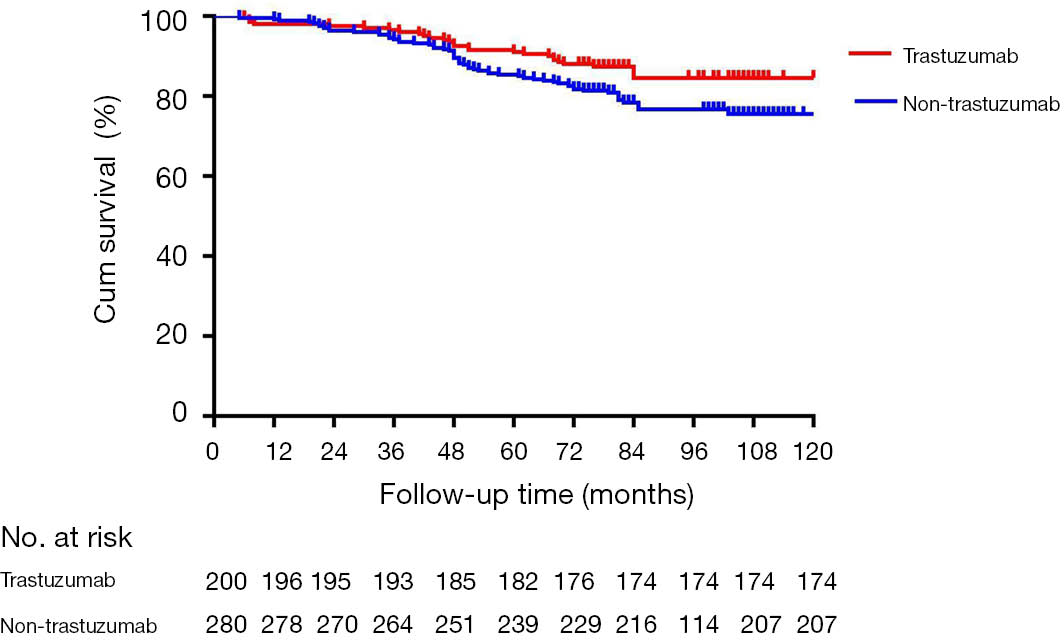 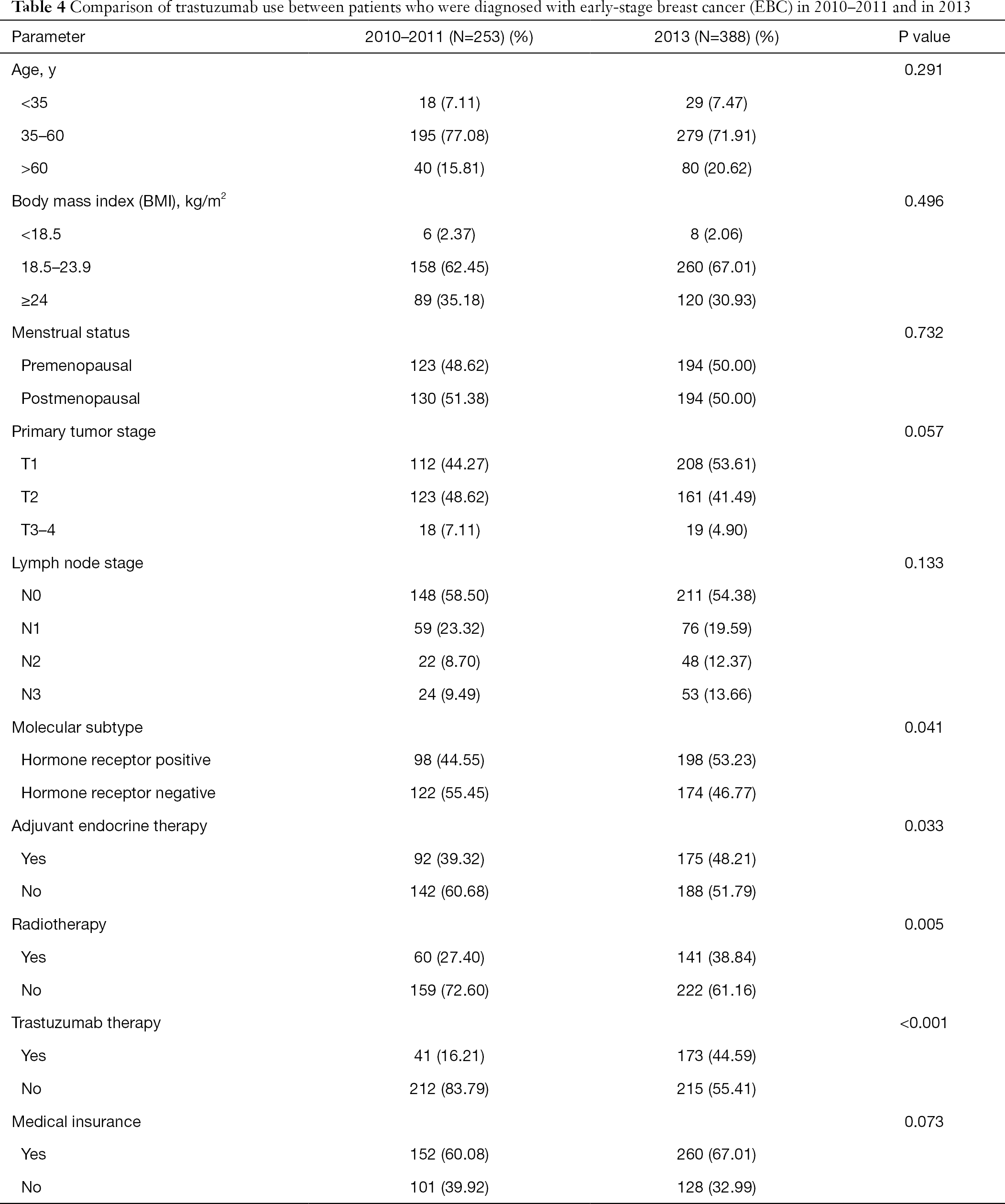 In this study, several factors were found to be associated with trastuzumab therapy. The presence or absence of medical insurance was the strongest predictor of trastuzumab use. Patients who had medical insurance were 3.909 times more likely to use trastuzumab than those without medical insurance. Hospitals offered trastuzumab therapy to 42.96% of patients with medical insurance, whereas they provided trastuzumab to 16.16% of patients without medical insurance. There are two specific reasons behind this. On the one hand, medical insurance was limited to the urban population who had a higher income, so were more likely to afford trastuzumab. On the other hand, trastuzumab was covered by medical insurance from 2012, which greatly reduced the out-of-pocket costs of patients. Several studies also revealed that economic burden was the main barrier to the use of trastuzumab. In China, another study demonstrated that patients who resided in more prosperous provinces/cities (with higher incomes) or in provinces/cities which provided medical insurance for trastuzumab (Beijing, Jiangsu, and Ningxia) were more likely to be treated with trastuzumab (11). Other research has also shown that physicians can decide not to prescribe anti-HER2 therapies where such treatment has regulatory approval but is not funded or reimbursed. A survey of oncologists in the United States and emerging markets (Brazil, Mexico, Turkey, and Russia) showed that among the respondents who reported “not so often,” “rarely,” or “never” prescribing trastuzumab, between 37% and 49% considered the lack of drug funding a barrier to the use of trastuzumab (13). Of the 151 physicians participating in TEACH, an international survey conducted in 2011, 27% of respondents reported at least 1 instance within the previous year in which adjuvant trastuzumab was recommended to a patient who ultimately did not receive it, citing cost as the reason for withholding treatment. Furthermore, cost was more often taken into account by physicians in low- and middle-income countries (73%) than in high-income countries (7%, P<0.0001) as a reason for withholding adjuvant trastuzumab (20).

There was a significant difference in the percentage of patients who received trastuzumab between 2013 and 2010–2011 (44.59% in 2013 versus 16.21% in 2010–2011, P<0.001). It should be noted that in 2013, more patients had medical insurance (67.01% in 2013 versus 60.08% in 2010–2011), although this did not reach statistical significance (P=0.073). This trend was certainly due to the health-care reform in China. In April 2009, China unveiled a huge and complex heath reform plan that pledged to provide all citizens with equal access to basic health care with reasonable quality and sufficient financial risk protection by 2020 (9). It emphasized insurance expansion in its first phase. Over the past 10 years, substantial progress was made in improving equal access to care and enhancing financial protection (21). In Jiangsu province, the insurance expansion together with the medical insurance coverage for trastuzumab greatly improved the rate of adjuvant trastuzumab use.

We also observed a trend towards more patients diagnosed with an earlier tumor stage in 2013 (P=0.057). This may be the result of enhanced breast cancer screening. First attempted in 2005, a national screening program for breast cancer set a goal of screening 1,000,000 women with both mammography and ultrasound, but was terminated because of a lack of funding and concerns about false-positive diagnosis (22). In 2009–2011, a “two-cancer” (breast cancer and cervical cancer) screening program was implemented for women aged 35–59 years in rural China and in some urban areas (23). Therefore, more accessible health services were provided to Chinese women, and breast screening has been taken more seriously since then. The results in our study reflected this phenomenon, particularly that patients younger than 35 years old were more likely to use trastuzumab therapy. In fact, several studies have demonstrated that trastuzumab was withheld from patients because of advanced age (24,25).

The strength of this study is that it is based on real-world data. It is also the first study, to the best of our knowledge, to explore the significance of health insurance policy in China on clinical practice. However, as a retrospective study, the current research has some limitations. Data were missing for many of the variables analyzed in some of the patients, which may bring information bais. In addition, the characteristics of patients in the trastuzumab group and those in the non-trastuzumab group were not evenly distributed. The unevenly distributed characteristics does may make it unreliable to directly analysis factors associated with the use of trastuzumab therapy. However we also took all variables with P value <0.10, including these potential confounders, from univariate analysis into the multivariate logistic regression model to identify factors independent associated with the targeted therapy. And we finally used the outcomes of the multivariate analysis to identify influencing factors. Therefore, large prospective randomized clinical trials are warranted to further verify the results of our study.

In conclusion, this study analyzed the factors affecting the use of trastuzumab as an adjuvant therapy for HER2-positive breast cancer patients in China. The results showed that the percentage of patients who received trastuzumab in China was lower than developed countries. Patients who had medical insurance were more likely to use trastuzumab than those without medical insurance. With the development of health-care reform in China, more patients could afford the targeted therapy essential for tumor management. Considering all this evidence, the health insurance policy in China has made great progress towards improving access for breast cancer patients who require trastuzumab therapy.

Funding: This study was financially supported by the Nanjing Medical University Education Development Foundation (JZ233490201802) and the Project of Philosophy and Social Science Research in Colleges and Universities in Jiangsu Province (2020SJA0292).

Reporting Checklist: The authors have completed the MDAR reporting checklist. Available at http://dx.doi.org/10.21037/tcr-20-3329

Conflicts of Interest: All authors have completed the ICMJE uniform disclosure form (available at http://dx.doi.org/10.21037/tcr-20-3329). The authors have no conflicts of interest to declare.

Ethical Statement: The authors are accountable for all aspects of the work in ensuring that questions related to the accuracy or integrity of any part of the work are appropriately investigated and resolved. The study was conducted in accordance with the Declaration of Helsinki (as revised in 2013).The study was approved by the ethics committee of the First Affiliated Hospital with Nanjing Medical University (Jiangsu Province Hospital, No.: 2018-SR-205). Informed consent form was signed by every patient.