Cervical carcinoma is the third most common female cancer in developing countries (1). Several factors such as HPV infection or chlamydia associated multiple pregnancies cause an increasing incidence of cervical carcinoma worldwide (2). Typically, carcinoma cells do not perform synchronized proliferation and self-renewal life cycles. A theory postulates that a small fraction of cancer cells, named as cancer stem cells (CSCs) (3), are answerable for the cancer initiation, development and migration. Furthermore, their roles in cancer therapy resistance and recrudesce were also reported (4-6). Thus, cervical CSCs have been considered as a potential clinical target (7).

Several studies have been working on the characterization of CSCs in cervical carcinoma (8,9). As the critical role CSCs play in resistance of chemotherapy and radiotherapy of cervical carcinoma (10), it has been considered for further development of new therapeutic target (11-14). Currently, several markers have been discovered for cervical CSCs, including cytokeratin (CK) 8, CK 17, CD44, and ALDH1 (8,15-17). However, it is unsatisfactory to identify cervical CSCs based on currently available technologies, the underlying mechanisms of cervical CSCs differentiation, proliferation and migration remain poorly illustrated.

CD276, also named B7H3, work as an immune checkpoint molecule (18). It expresses in most normal tissues at a low level, but shows a significantly high abundance in variety of cancer cells including breast, colorectal, glioma, kidney, liver, lung, and cervical (19-21). Recent discoveries indicate that CD276 is associated with poor prognosis in clinical (21,22). Several studies also claim that CD276 also displays CSCs-like traits in different cancers. However, even with the high-level expression of CD276 in cervical carcinoma, the potential role of CD276 in cervical CSCs has not been reported. Therefore, this study intends to articulate the CD276’s function in cervical cell metastasis and chemotherapy resistance.

We present the following article in accordance with the ARRIVE reporting checklist (available at http://dx.doi.org/10.21037/tcr-19-2910).

Experiments were performed under a project license [No. 2019(A)027] granted by committee Chinese National Institute for Food and Drug Control, in compliance with Regulations for the Administration of Affairs Concerning Experimental Animals published by the Chinese Government.

HeLa cell lines were obtained from the Type Culture Collection of the Chinese Academy of Sciences (Shanghai, China) and cultured according to the manuals. In details, cells were maintained in high glucose DMEM with 10% fetal bovine serum, 100 IU/mL penicillin G and 100 µg/mL streptomycin at 37 °C in a humidified 5% CO2 incubator.

HeLa cells (0.5×103) were seeded into 100 mm2 cell culture plates and cultured for 7 to 12 days. Colonies were fixed with paraformaldehyde, stained with crystal violet, and counted.

The pcDNA3.1-CD276 or control pcDNA3.1-LacZ plasmid vectors were transfected into HeLa cells using Lipofectamine 2000 transfection reagent, according to the manufacturer’s instructions. The cells were resuspended in complete medium (DMEM supplemented with 10% fetal bovine serum) for 48 h.

HeLa cells viability were determined by MTT assay. Briefly, cells were seeded in 96-well plates that were precoated with Matrigel, and various concentrations of cisplatin were added at the beginning, co-incubated for 12 or 24 h. After changing to fresh medium without cisplatin, cells were cultured for another 72 h. The MTT reagent was then added to each well according to the manufacturer’s instructions. Absorbance was measured at 490 nm.

BALB/c-nu mice (4–6 weeks old, female) were purchased from Charles River Laboratories (Beijing, China), and tumor cells (1×106) were subcutaneously injected into the dorsal or ventral flank. The mice were observed every three days. Two weeks later the mice were sacrificed and the tumor were dissected. All animal research was performed in accordance with the detailed rules approved by the Animal Care and Use Ethnic Committee, and all efforts were made to minimize animal suffering.

Results are shown as mean ± standard error of the mean. Statistical analysis among different groups was assessed by student’s t-test. P<0.05 was defined as statistically significant. 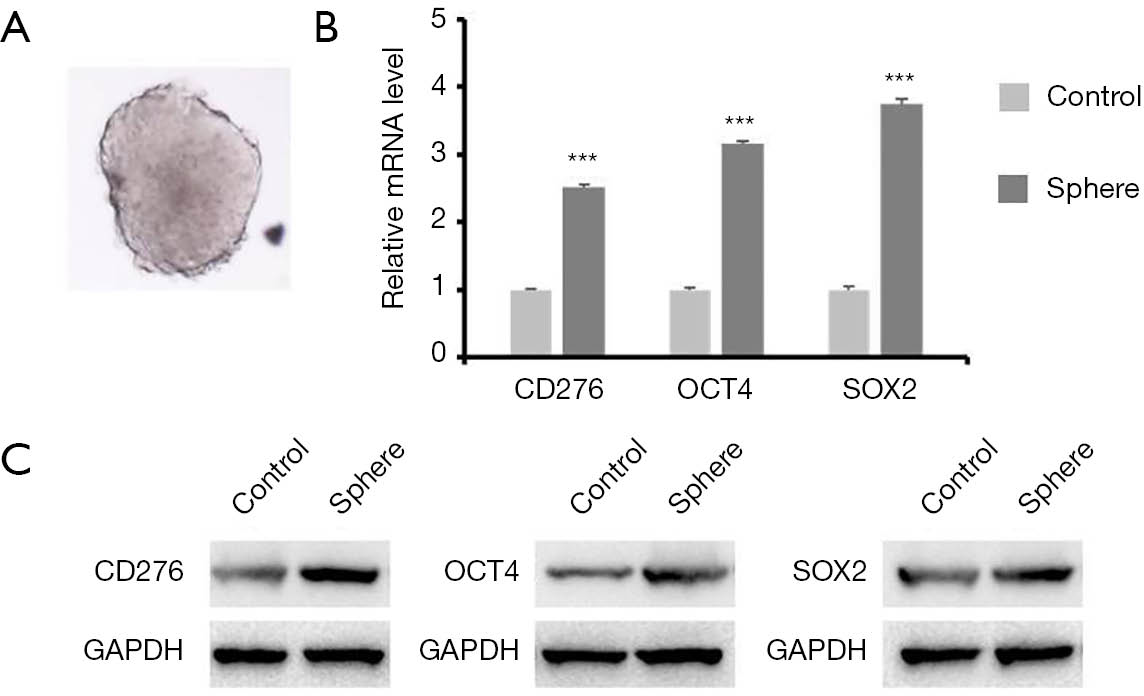 CD276 promotes the self-renewal process of the HeLa cells

Sphere-forming possess is the milestone of self-renewal process in cancer cells (23). To evaluate whether the expression of CD276 affects the sphere forming possess of HeLa cells, we regulated CD276 expression via two independent but opposite approaches, siRNA and extraneously transforming CD276-containing plasmid, and expression of CD276 and sphere-forming cells have been quantified. The RT-qPCR results (Figure 2) demonstrated that the both siRNA and CD276 vector could successfully regulate CD276 expression (Figure 2A,C). While the CD276 expression was downregulated, the number of cells that formed sphere significantly decreased (Figure 2B). On the contrary, overexpression of CD276 led to a significant increase in the abundance of formed spheres (Figure 2D). These results indicated the important role of CD276 in HeLa cells’ renewal. 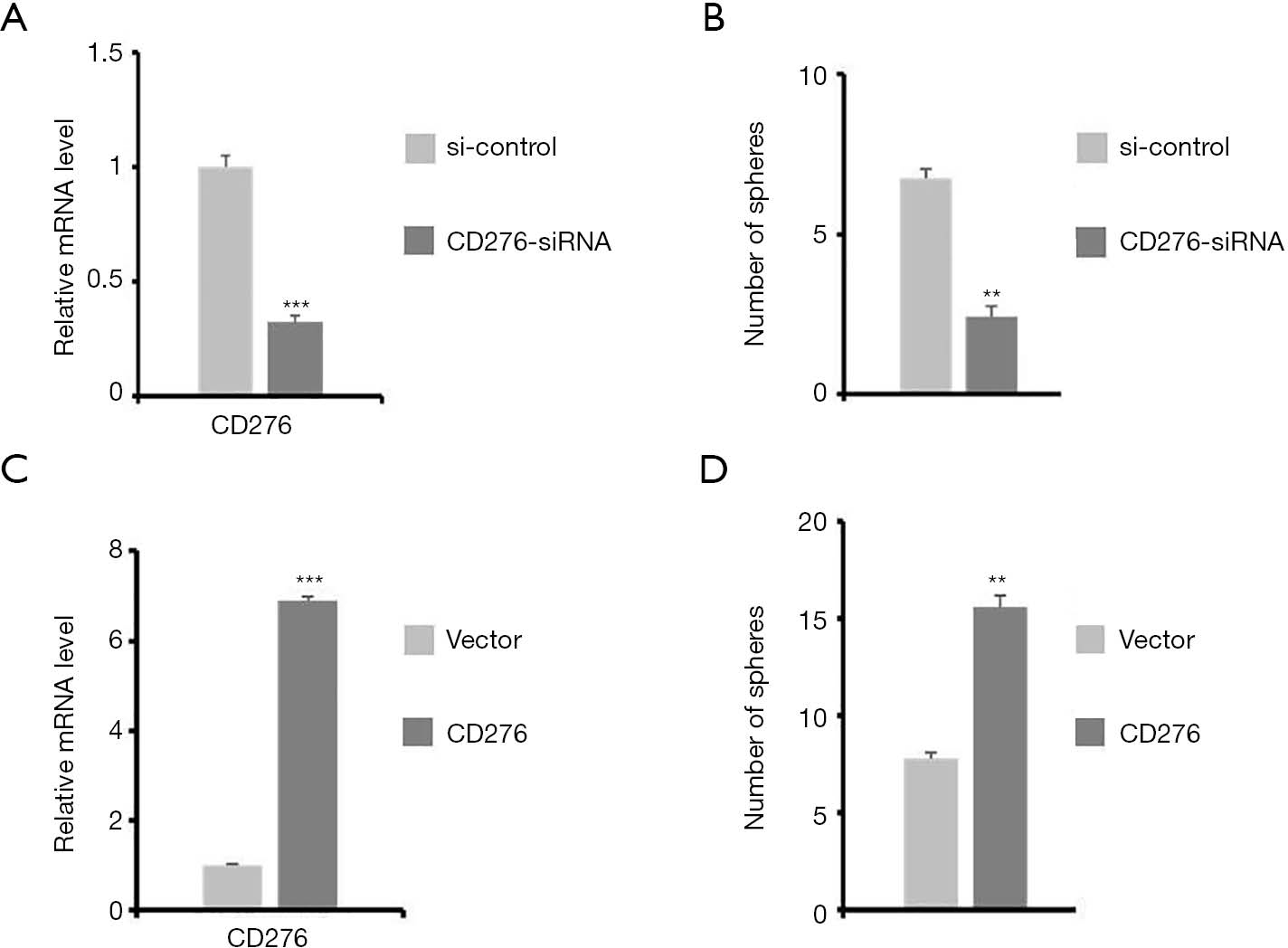 Figure 2 CD276 plays an important role in self-renewal process of the tumor cells. (A) siRNA downregulates expression of CD276 in Hela cells; (B) the number of sphere-forming cells decreased after CD276 downregulation; (C) overexpression of CD276 in Hela cells; (D) the number of sphere-forming increased after CD276 overexpression. Results are shown as mean ± standard error of the mean. **, P<0.01; ***, P<0.001.

CD276 serves as an oncogene in HeLa cells

To further investigate the bioactivity of CD276 in HeLa cells, we performed the colony formation assay and MTT assay after siRNA treatment or plasmid transformation. Knock-down of CD276 in HeLa cells remarkably inhibited the cell colony formation compared with control test (Figure 3A). Plasmid transformation of CD276, reversely, promoted the colony formation of HeLa cells extraordinarily (Figure 3A). Furthermore, MTT assay also indicated that downregulation of CD276 caused the decrease of cell viability while overexpression enhanced cell viability in 24–72 hours post-treatment (Figure 3B). These data demonstrated that CD276 is an oncogene which increases the metastasis of HeLa cells.

Previous studies concluded that CSCs greatly contributed on chemotherapy resistance in variety of cancers. To explore whether CD276 is involved in chemotherapy resistance of HeLa cells, we treated HeLa cells with cisplatin while increase or decrease expression of CD276 respectively. CD276 siRNA significantly increased cytotoxicity of cisplatin in HeLa cells, while CD276 plasmid transformation decreased its toxicity (Figure 4A). Meanwhile, MTT assay showed similar results, the expression level of CD276 was positively correlated to the cell viability after cisplatin treatment (Figure 4B). These findings suggested that CD276 protected HeLa cells in chemotherapy.

To evaluate the CD276’s influence on cervical carcinoma in vivo, we assessed the tumor size in a xenotransplantation mouse model. 6-week BALB/c-nu mice were used to transplant either wildtype or CD276 overexpression HeLa cells were into the dorsal or ventral flank. Significantly, all the tumors formed in CD276 overexpression group displayed a larger size with heavier weight compared to control group (Figure 5). These results indicated the overexpression of CD276 promoted cervical cancer proliferation and growth in vivo.

In this present study, we demonstrated that CD276 inhibited the proliferation and self-renewal capacity of HeLa sphere-forming cells, and also involved in chemotherapy resistance. This evidence suggested that CD276 might be a critical factor in cervical CSCs formation.

Despite the widespread of screening programs, cervical cancer remains the third most common female cancer in developing countries (1,2). Currently, strategies targeting cervical CSCs have been considered as a new therapy target with rising hope.

The abundance of CSCs is highly associated with cancer growth, invasion, and the resistance of conventional cancer therapy such as chemotherapy and radiotherapy. To date, treatment targeting CSCs has been considered as a novel strategy for clinical cancer therapy against cancers including cervical carcinoma. However, the molecular mechanism between CSCs and cervical carcinoma is still awaiting further clarification.

Conventionally, CD276 has been considered as an immune check point molecular (20). Recently, increasing evidence supports that CD276 is an oncogene and directly increases cancer development (20,24,25). Benzon et al. found that the expression level of CD276 is correlated with malignant phenotype of prostate cancer (26). In other hand, downregulating CD276 expression could significantly suppress the cell proliferation and increase chemotherapy sensitivity in various cancers, such as prostate, breast, gastric, colorectal, melanoma and cervical (18,20,27). However, few researches focus on the correlation between CD276 and CSCs, even though they exhibit similar functions including accelerating cancer invasion and recrudesce, as well as increasing chemotherapy resistance.

The subpopulation of sphere-forming cells performs most stem cells’ properties, which is instrumental for stem cell studies. In HeLa cells, the sphere-forming cells express various stem cell markers in an extremely high amount, including OCT4 and SOX2. Thus, in this present study, we firstly proved the increasing expression of CD276 in sphere-forming cells of HeLa cell line. To further evaluate the effect of CD276 on cervical carcinoma, we overexpressed CD276 by using pcDNA3.1-CD276, and knockdown CD276 via siRNA. The results indicated that the expression level of CD276 is positively correlated with the proliferation, self-renewal, and oncogenesis in HeLa cell line.

In conclusion, this presented study demonstrated that CD276 positively regulate the proliferation, self-renewal, and oncogenesis, as well as chemotherapy resistance in HeLa cells. These findings provide a solid evidence for the relationship between CD276 and cervical carcinoma, and also reveal the potential for CD276 as a new therapeutic target.

We thank Liu Yang for her technical assistant during the animal experiment.

Reporting Checklist: The authors have completed the ARRIVE reporting checklist. Available at http://dx.doi.org/10.21037/tcr-19-2910

Conflicts of Interest: All authors have completed the ICMJE uniform disclosure form (available at http://dx.doi.org/10.21037/tcr-19-2910). The authors have no conflicts of interest to declare.

Ethical Statement: The authors are accountable for all aspects of the work in ensuring that questions related to the accuracy or integrity of any part of the work are appropriately investigated and resolved. Experiments were performed under a project license [No. 2019(A)027] granted by committee Chinese National Institute for Food and Drug Control, in compliance with Regulations for the Administration of Affairs Concerning Experimental Animals published by the Chinese Government.