Pseudoprogression refers to the enlarged lesions or new enhanced lesions by imaging assessment following radiotherapy, chemotherapy, or immunotherapy. Subsequent treatment may find that the suspected lesions are sensitive to treatment, and they are therefore not true progression or recurrence (1,2). Since pseudoprogression and tumor recurrence are difficult to discriminate, it can greatly interfere with the therapeutic strategies, and even lead to erroneous treatment. Currently, differential diagnosis of pseudoprogression is dependent on the combination of pathological biopsy, imaging observations and experimental treatment (3,4). However, for patients with multiple metastatic lung cancer, it is impossible to perform pathological biopsy on all lesions, and the differential response of different lesions to immunotherapy also increases the difficulty in assessment. Therefore, it may be necessary to assess the lesions separately based on their distinct features to avoid misdiagnosis of progression.

In this study, we report a case of lung adenocarcinoma with coexistence of partial response, progression and pseudoprogression, and explore the potential molecular mechanisms of rare metastasis or progression. We hope to share our diagnostic and therapeutic experience in a complicated condition involving different treatment responses. We present the following article in accordance with the CARE reporting checklist (available at http://dx.doi.org/10.21037/tcr-20-2736).

Here we report a 57-year-old male patient, with a continuous smoking history of over 30 years, who was diagnosed as left lower lung peripheral lung cancer with left hilar and mediastinal lymph node metastasis, bilateral adrenal metastasis, and bilateral parietal metastasis. Needle biopsy was performed, and subsequent HE staining and immunohistochemistry confirmed poorly differentiated adenocarcinoma with PD-L1(+), CK(+), NapsinA(+) and TTF-1(+) (Figure 1). Quantitative polymerase chain reaction (qPCR) assay of EGFR, ALK and ROS-1 genes in primary tumor tissue showed no sensitive mutations to tyrosine kinase inhibitors (TKIs). Therefore, he was given the first-line therapy with PP regimen (Pemetrexed 900 mg d1+Cisplatin 60 mg d1–2 q3w) for 4 cycles, followed by 2 cycles of maintenance chemotherapy with Pemetrexed, while progression was observed after 2 cycles of maintenance therapy. Since the primary tissue immunohistochemistry showed strong positive PD-L1 expression (90%) (Figure 1), he entered the second line immunotherapy with IBI308 (sintilimab) (Innovent Biologics Co., Ltd) in a clinical trial (NCT02937116). The left lower lung lesions and mediastinal lymph nodes became significantly smaller after 3 cycles of treatment, and were evaluated as partial response (PR), but computed tomography (CT) showed new lesions in the left lung and suspected metastases in the liver (Figure 2), with a bean-sized mass (1.7 cm × 1.5 cm × 0.7cm) appeared at gingiva of the right lower jaw and symptom of gingival pain was documented in the patient. The gingival mass was removed and pathological biopsy confirmed a metastasis of poorly differentiated lung adenocarcinoma with CK (+), NapsinA (+) and TTF-1 (+) (Figure 3). The whole-exome sequencing (WES) showed that the main mutations of the gingival metastasis were ErbB2 amplification (3.1 copies), MET amplification (5.1 copies), PTEN amplification (3.0 copies) and TP53del (c.675_685del, 14.96%) with a large number of non-driver gene point mutations and insertion/deletion mutations (Tables 1,2). 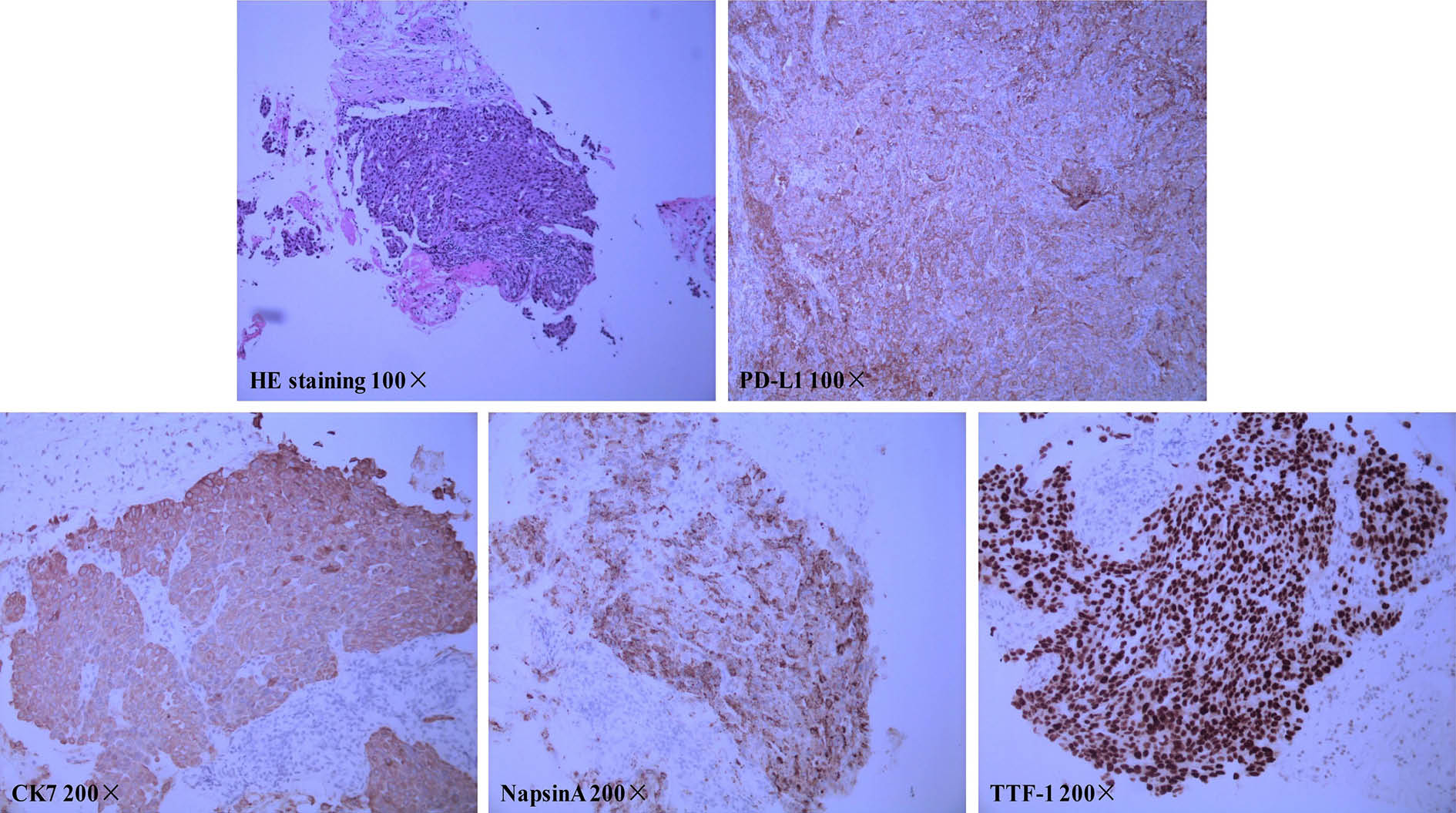 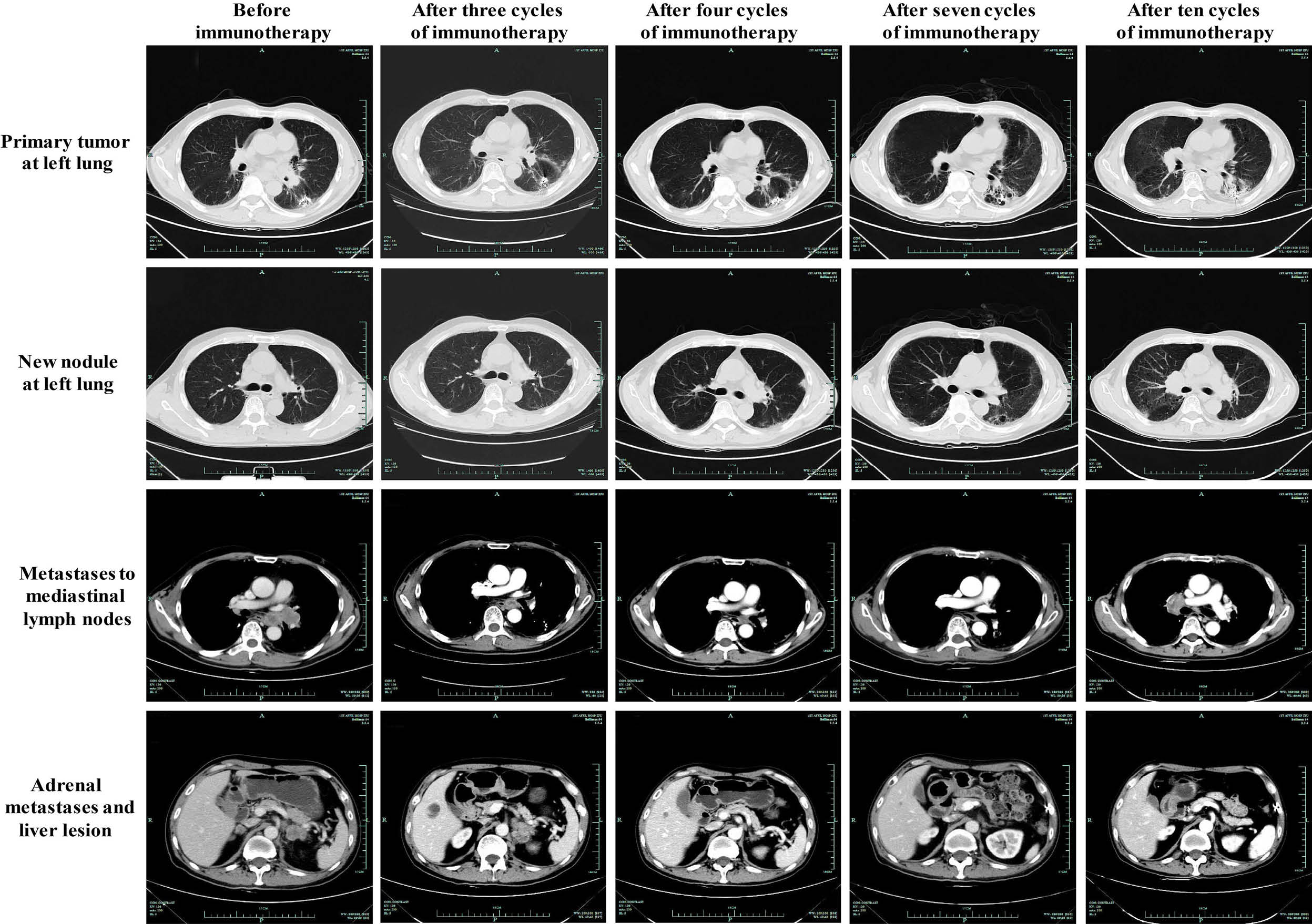 Figure 2 The response of primary tumors, new left lung nodules, mediastinal lymph node, adrenal, and liver lesions before immunotherapy and after 3, 4, 7, 10 cycles of immunotherapy. Partial response was observed with primary tumors, mediastinal lymph node and adrenal metastases, while new lesions at left lung and right liver lobe were found after three cycles of treatment. The new lesions continued to shrink until disappeared from cycle 4 to cycle 10, which was diagnosed as pseudoprogression. 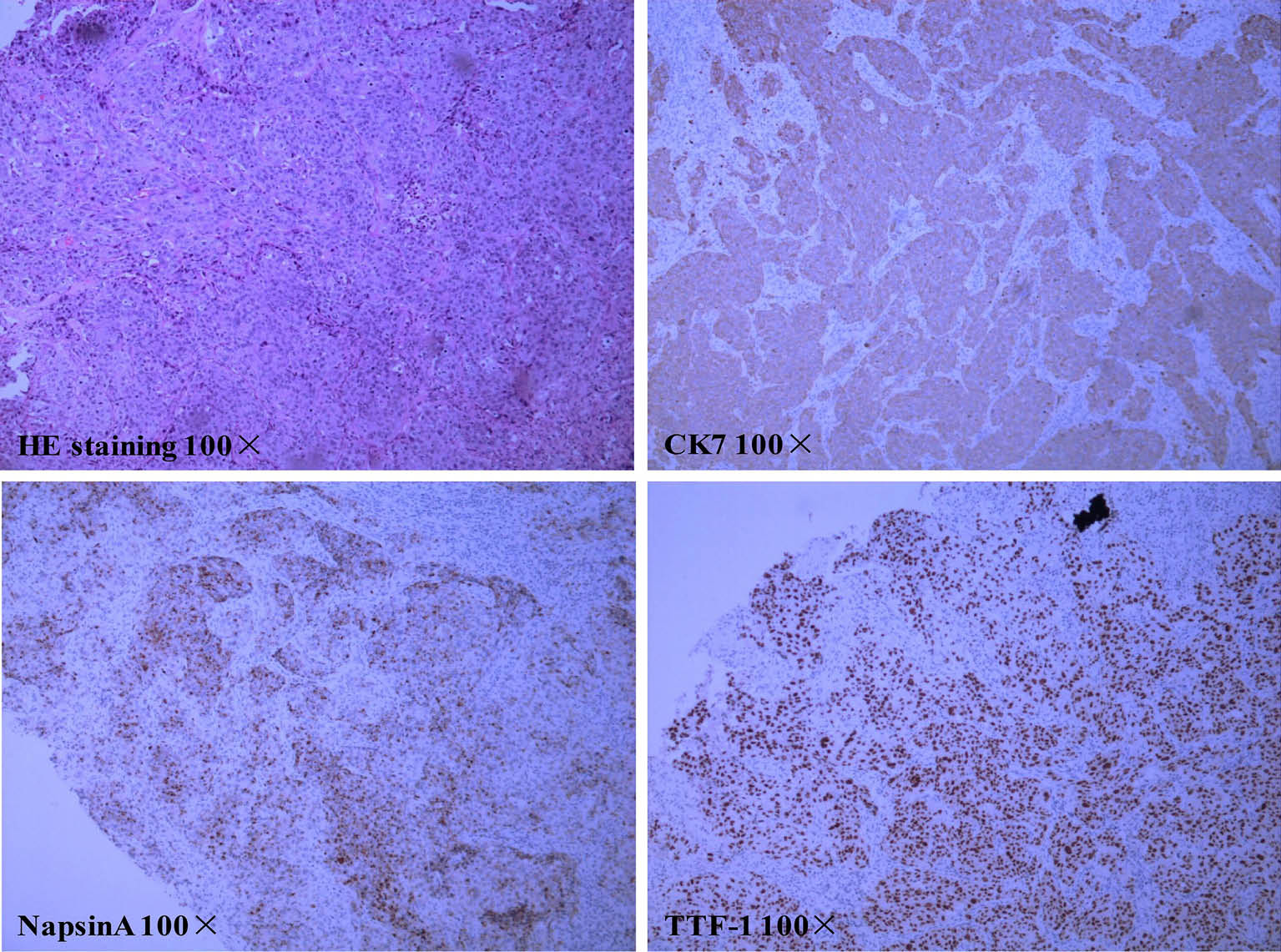 Although there were suspected new lesions at left lung and liver, the primary lung and mediastinal lymph nodes showed PR after 3 cycles of IBI308 (sintilimab) treatment. The patient had a significant improvement in self-feeling and appetite. It was therefore decided to continue the medication and observation. Assessment at by the end of the 7th cycle showed significant relief of left lung primary tumor, left lung new lesion, mediastinal lymph node, adrenal metastases, and the suspected liver lesion, and was regarded as PR (Figure 2). Meanwhile, immune pneumonia appeared around the 6th–7th cycle, and was treated with high dose methylprednisolone, and improvement was observed after 1-month treatment. Chest and abdomen CT showed stabilized primary and hepatic and adrenal lesions after 9 cycles of treatment (Figure 2), while the patient developed dizziness and nausea after 10 cycles of treatment. The magnetic resonance imaging (MRI) showed a new lesion in the right parietal lobe, which was assessed as PD. The patient reached the endpoint of clinical trial with progression-free survival (PFS) of 12.9 months (Figure 2). The new lesions on the right parietal lobe were treated with stereotactic radiosurgery, and the treatment of the third-line therapy with Docetaxel + Bevacizumab has begun.

Diagnosis, therapy, and assessment in concurrence of partial response, progression and pseudoprogression

In the case reported in this study, primary tumors, and some metastases (mediastinal lymph nodes, adrenal glands) were relieved after immunotherapy, while new metastases (gingiva) and suspicious metastases (left lung, liver) appeared. The latter showed significant response after continued treatment with the same strategy, suggesting that simultaneous target lesion relief, non-primary site progression and pseudoprogression coexisted in this case. This phenomenon is rare in current immunotherapy. The diagnosis of gingival metastasis suggests that the left lung and liver lesions may be true new metastases, but they responded well to treatment. This gives us new thinking about the definition of pseudoprogression, which may not necessarily be limited to the primary lesion or the lesions already existing at the time of diagnosis, and it may appear as new lesions after the start of immunotherapy. It was reported that biopsy can be performed to distinguish true metastasis from pseudoprogression, as immune cell infiltration and rare tumor cells were mainly found in pseudoprogression, while true progression always presented large amount of tumor cells (3-5). Therefore, if target lesions respond well while new suspected metastatic lesions appear after treatment, and the patient feel better in general condition including appetite, the treatment can be continued to confirm the diagnosis of new lesions, and responded lesions and suspected progression may be assessed separately, as discrepancy has been found between imaging and pathological assessment in some patients.

In this case, the gingival mass was diagnosed as metastatic carcinoma, which was very rare in lung adenocarcinoma. It was reported that metastatic cancer accounted for 1% of oral tumors. The primary cancers included lung, prostate, rectal cancers in male and breast, adrenal glands, and genitalia cancers in females (6). In this study, the gingival metastasis was sequenced by WES and key driver gene variations including MET, HER2, PTEN amplification and TP53del mutations were identified. Although the complete sequencing information of the patient's primary tumor was absent, large variations of driver genes are more commonly seen in metastatic cancer than the primary cancer, which could be the driving force of metastasis (7-14).

In conclusion, we reported for the first time the coexistence of partial response with true progression and pseudoprogression, and identified the possible molecular mechanism of rare gingival metastasis. Our study provides experience and evidence for the diagnosis of pseudoprogression and therapy of multiple metastases with immunotherapy.

We thank Dr. Zili He for proof reading the manuscript as a native English-speaking expert.

Reporting Checklist: The authors have completed the CARE reporting checklist. Available at http://dx.doi.org/10.21037/tcr-20-2736

Conflicts of Interest: All authors have completed the ICMJE uniform disclosure form (available at http://dx.doi.org/10.21037/tcr-20-2736). Dr. LY, Dr. LL and Dr. GL report other from HaploX Biotechnology, outside the submitted work. Dr. LS and Dr. NX report grants from Zhejiang Provincial Science and Technology Project, grants from National Health and Family Planning Commission Research Fund and Zhejiang Provincial Medical and Health Major Science and Technology Plan Project, during the conduct of the study. Dr. LS reports other from HaploX Biotechnology, Shenzhen, China, outside the submitted work. The other authors have no conflicts of interest to declare.

Ethical Statement: The authors are accountable for all aspects of the work in ensuring that questions related to the accuracy or integrity of any part of the work are appropriately investigated and resolved. All procedures performed in studies involving human participants were in accordance with the ethical standards of the institutional and/or national research committee(s) and with the Helsinki Declaration (as revised in 2013). Written informed consent for sample collection, genetic testing and publication of the case was obtained from the patient.