Lung cancer is the leading cause of cancer-related mortality worldwide, with approximately 85% of patients having non-small cell lung cancer (NSCLC) (1). Surgery is still the first choice of treatment for localized NSCLC if the patient’s physical condition is feasible. However, the postresection 5-year survival rate is only 50% to 60% (2). The primary tumor, lymph nodes (LNs), and the metastasis (TNM) staging system remain the most important determinant of outcome (3). Because prognosis of lung cancer is directly proportional to the presence of LNs metastasis, accurate LNs assessment is crucial in determining treatment. Could radical systematic LNs dissection or sampling lead to a different result on patients with cIA NSCLC? Up to now, although there have been several prospective controlled studies published, they had never reached a consensus (4-6). The pulmonary nodule diameter and consolidation/tumor ratio (CTR) is a well-established radiological parameters for identifying pathologic noninvasive tumors or invasive tumors on CT images of the chest (7,8). However, there are limited studies on the relationship between CT imaging information and LNs metastasis. Therefore, we aimed to determine whether the use of pulmonary nodule diameter and CTR predicts LNs metastasis for early-stage (cT1N0M0) lung adenocarcinoma. We present the following article in accordance with the STARD reporting checklist (available at http://dx.doi.org/10.21037/tcr-20-2548).

The study was conducted in accordance with the Declaration of Helsinki (as revised in 2013). The study was approved by the institutional ethics board of China-Japan Friendship Hospital (No. 2018-13-K08) and Consent of patients was waived because it was a retrospective study.

We retrospectively analyzed 433 consecutive patients who underwent therapeutic surgical resection in China-Japan Friendship Hospital between February 2011 and February 2019. We included patients with the following criteria: (I) received lobectomy and sublobectomy without any preoperative chemoradiotherapy; (II) was preoperatively staged as clinical stage IA (T1N0M0, tumor size ≤3 cm); (III) was pathologically confirmed with peripherally located primary lung adenocarcinoma (outer one-third of the hemithorax); or (IV) underwent systematic LNs dissection or sampling based on the European Society of Thoracic Surgeons criteria (9).

The HRCT imaging information contains the following: (I) the diameter of the tumor (T) was defined as the largest axial diameter of the lesion on the lung window setting; (II) the diameter of consolidation (C) on the axial image on the lung window setting was measured, and consolidation was defined as an area of increased opacification that completely obscured the underlying bronchial structures and vascular markings; (III) the largest axial diameter of the lesion on the mediastinal window (DM) setting was also measured; (IV) Diameter of nodule measured by postoperative pathology (DP); (V) the ratio of the maximum diameter of consolidation relative to the maximum tumor diameter from the lung window (CTR). Status of LNs metastasis contains the following: (I) total dissected mediastinal LNs number and metastasis rate; (II) total dissected N1 (hilar or intrapulmonary) LNs number and metastasis rate. CT images were independently evaluated by a radiologist with more than 10 years' experience in thoracic imaging diagnosis and a thoracic surgeon with more than 10 years' experience in diagnosis and treatment of thoracic disease. The clinicopathological characteristics of the patients were not informed in advance to avoid any potential bias. Length measurements were carried out by manual cursor method in the Picture Archiving and Communication System (PACS).

All patients were staged according to the eighth edition of the TNM staging system for lung cancer (3).

Categoric variables were expressed as percentages and evaluated with λ2 or Fisher’s exact test. Continuous data were presented as mean ± SD and were compared using the ANOVA, two-sample Student t test and nonparametric tests. Receiver-operating characteristic (ROC) curves were plotted to assess the predictive value of LNs metastasis in early-stage lung adenocarcinoma. All P-values were reported by 2-sided analyses, and the statistical significance level was set at less than 0.05. Statistical analysis was performed with SPSS 24.0 software (SPSS, Inc., Chicago, IL, USA). 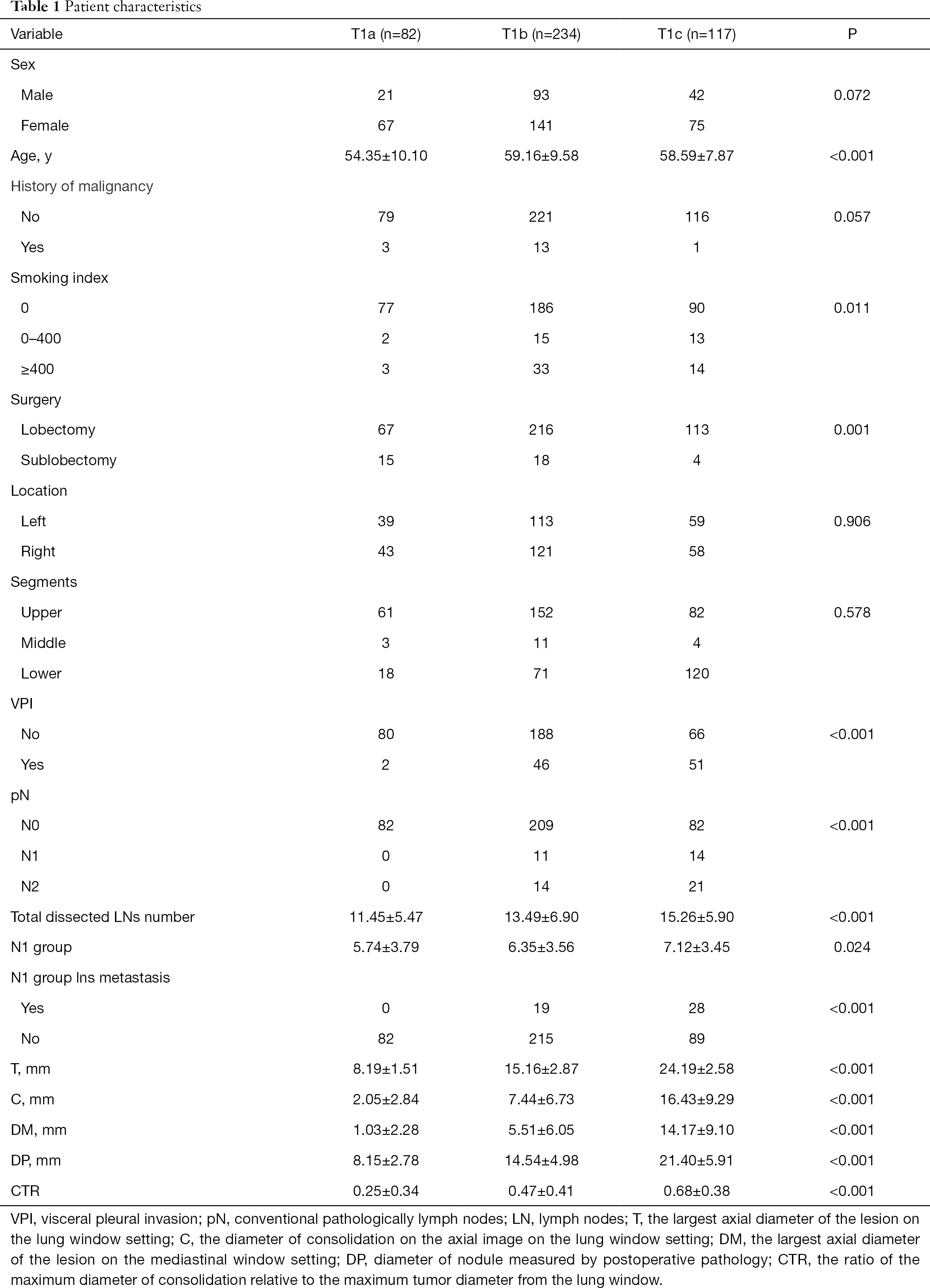 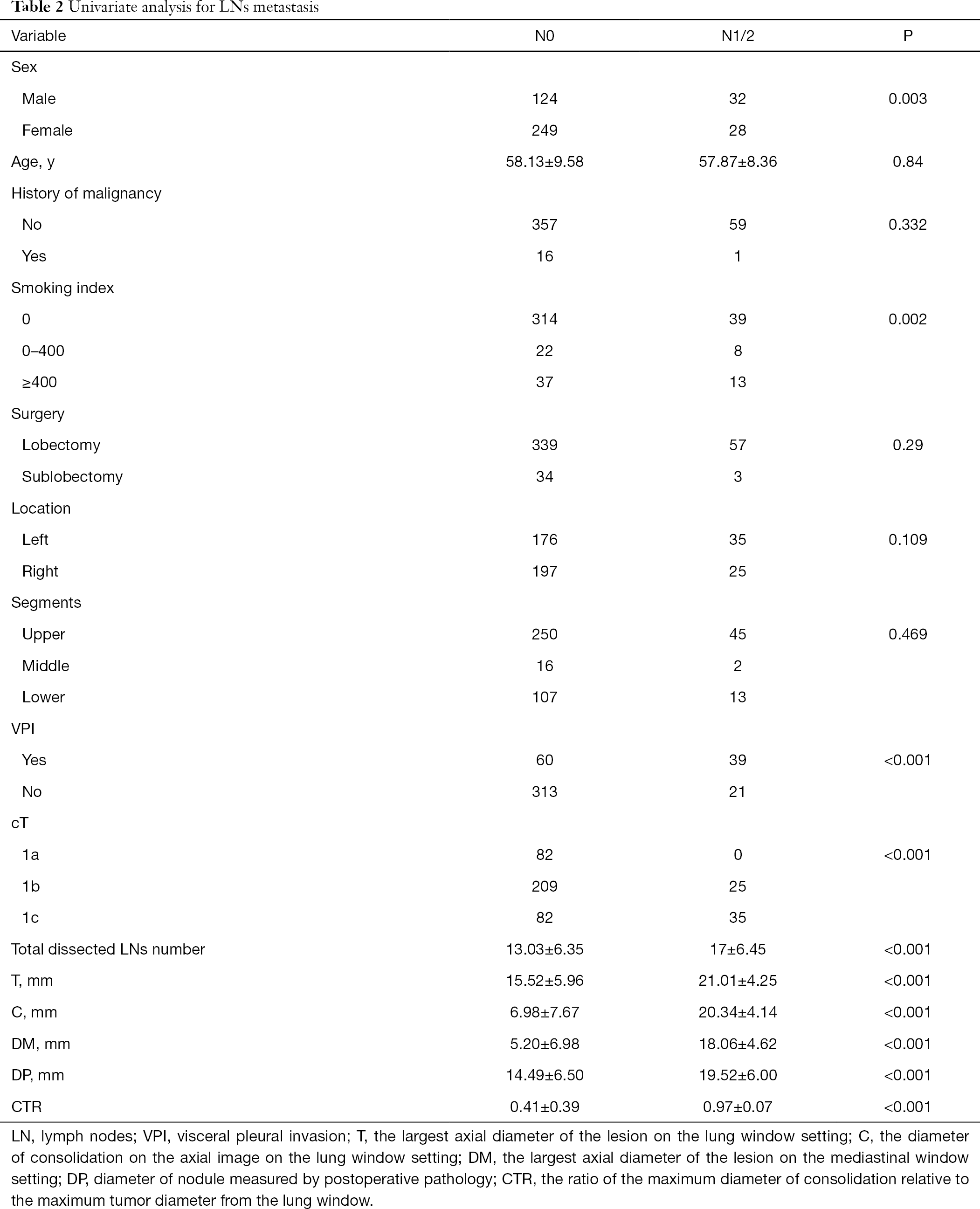 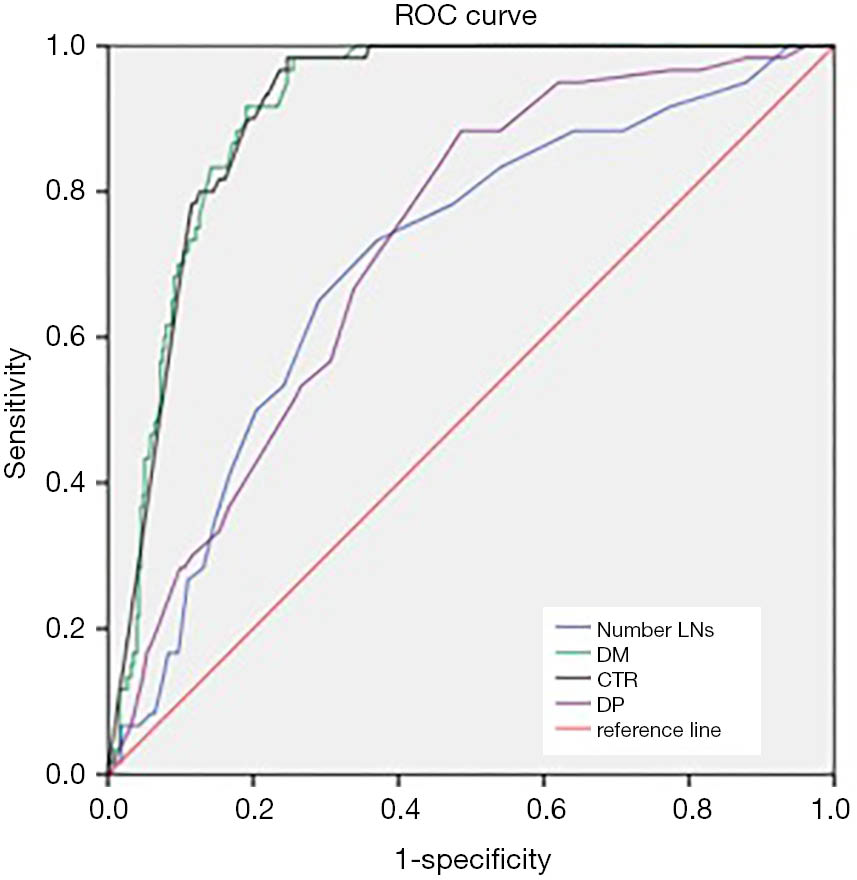 The tumor size and LNs metastasis

Pulmonary nodules were further divided into solid, ground-glass, and part-solid categories. The detection of small-sized lung cancer was increasing with the development of low dose CT (LDCT), however, the preoperative evaluation of LNs status with CT scan was remaining to be difficult mainly because many cancer positive nodes of normal size could be seen on pathological examination especially in adenocarcinoma cases. It has been proved that the maximum diameter of the nodule was associated with LNs metastasis (10,11). In our study, we have chosen the diameters measured in various ways (including T, C, DM, and DP). According to the largest axial diameter of the lesion on the lung window setting, IASLC Lung Cancer Staging Project results show that cT1 tumors could be divided into three subgroups based on the best cut points identified by the running log-rank analysis (3). Pathological N1 LNs metastasis in cT1a, cT1b, and cT1c group was 0%, 4.70%, 11.97%, respectively. Pathological N2 LNs metastasis in cT1a, cT1b, and cT1c group was 0%, 5.98%, 17.95%, respectively. The rate of LNs metastasis increases with the increase of T. Many early-stage lung cancer showed ground-glass opacity (GGO) nodules on chest CT. Generally, GGO on a chest CT was considered an indication of noninvasive or minimally invasive tumors (12). Part-solid GGOs tended to have increased malignant invasiveness as the solid portion increases (13). Saji et al. believed that the predictive values of the solid tumor size visualized on HRCT especially in the mediastinal window for pathologic high-grade malignancy and prognosis in lung adenocarcinoma were greater than those of whole tumor size (14). In our multivariate analysis, DP and DM were independent prognostic factors for LNs metastasis. DP was difficult to obtain before an operation, so the value of prediction was poor. We suggested that the DM be used to predict LNs metastasis in cases of lung adenocarcinoma with a GGO component visualized on HRCT. According to the ROC curve and Youden index, we calculated that the best cutoff point was 11.81 cm. We recommended systematic LN dissection if DM was greater than 11.81 cm and the pathological type was adenocarcinoma.

Previous studies have revealed that a CTR of 0.5 or less was an important cutoff value for predicting pathologic invasiveness in lung adenocarcinoma (15,16). Similarly, we also noted that there was no LNs metastasis in patients with a cutoff point of less than 50%. The Japan Clinical Oncology Group (JCOG) 0201 study revealed that CTR of 0.25 or less was an important cutoff value for predicting pathologic noninvasiveness in lung adenocarcinoma of 2.0 cm or less (17). A lower CTR corresponded with less aggressive behavior, whereas a higher CTR indicated a more aggressive tumor. There were further studies on CTR and LNs metastasis. Heineman et al. reported that LNs metastasis occurred in 14.9% of patients with clinical stage I NSCLC after anatomical resection (18). In our research, CTR was an independent factor for LNs metastasis. According to the ROC curve and the Youden index, an LNs metastasis patient could be predicted by a CTR with a cutoff point of 79.50% and a specificity of 98.3% (95% CI, 0.883–0.939) for peripherally located primary lung adenocarcinoma ≤3.0 cm in size. As a result, 79.50% cutoff point showed the highest specificity, although its sensitivity was relatively low. However, Moon et al. believed that patients with a CTR ≥0.61 had LNs metastasis (19). The reason for such a big difference in cutoff point might be the fact that they only included clinical N0 patients, and we had no limit on clinical N staging. The CTR ≥79.50% provided clinically safe criteria to identify LNs metastasis.

In the current lung cancer TNM staging system, the anatomic extent of LNs metastases was the only factor used to define the N category of TNM (20). Some studies have demonstrated that the number of positive LNs was an important prognostic factor for resected NSCLC (21). According to ACOSOG Z0030 results, National Comprehensive Cancer Network (NCCN) recommends systematic lymphadenectomy or sampling for lung cancer patients, with at least 12 LNs removed (4). Liang et al. recommended 16 LNs as the cutoff point for evaluating the quality of LN examination or prognostic stratification postoperatively for patients with declared node-negative disease (22). In our study, the total dissected LNs number was an independent factor for LNs metastasis. According to the ROC curve and the Youden index, LNs metastasis patients could be better predicted by a total dissected LNs number with a cutoff point of 13.5 for lung cancer. ACCP only recommended that the minimum requirements for accurate nodal staging must include the removal of at least six LNs from hilar and mediastinal stations (5). Complete resection including 14 or more LNs provided more information for determining LNs metastasis and TNM classification.

The presence of VPI reflected a poor prognosis in resected patients with lung cancer (23). Primary tumor cT1 with VPI was upgraded to pT2a in the 8th edition of the TNM classification system for patients with lung cancer (3). In our analysis, VPI was an independent factor for LNs metastasis. The VPI rate was only 2.43% in cT1a group, but up to 43.59% in cT1c group. Moon et al. believed that VPI (HR 2.901, P=0.005) was a predictor of LNs metastasis in clinical N0 peripheral NSCLC with nodules size ≤3 cm (24). Ding et al. also found that VPI (OR 48.37, P<0.001) was significantly associated with LNs metastasis in clinical stage IA NSCLC (25). If VPI was found during the operation, lymphadenectomy should be taken and all visible LNs should be removed.

Our study still suffered from several limitations. First, as a retrospective study, it was vulnerable to various sources of deviation that might not be identified and controlled. Second, this was a single institutional study with a limited sample size and thus calls for more evidence from further prospective studies (including a larger series of patients).

Under the eighth edition TNM classification, with the increase of tumor diameter, the probability of LNs metastasis increases. On univariate and multivariate analysis, VPI, DP, DM, CTR, and total dissected LNs number categories were independent factors for LNs metastasis. If DM ≥11.81 cm, or CTR ≥79.50%, or VPI, systemic lymphadenectomy was recommended. We suggested 14 LNs as the cut point for the evaluation of the quality of postoperative LNs examination.

Reporting Checklist: The authors have completed the STARD reporting checklist. Available at http://dx.doi.org/10.21037/tcr-20-2548

Conflicts of Interest: All authors have completed the ICMJE uniform disclosure form (available at http://dx.doi.org/10.21037/tcr-20-2548). The authors have no conflicts of interest to declare.

Ethical Statement: The authors are accountable for all aspects of the work in ensuring that questions related to the accuracy or integrity of any part of the work are appropriately investigated and resolved. The study was conducted in accordance with the Declaration of Helsinki (as revised in 2013). The study was approved by the institutional ethics board of China-Japan Friendship Hospital (No. 2018-13-K08) and Consent of patients was waived because it was a retrospective study.