As indicated in the latest GLOBOCAN report, about 2.1 million new diagnosed lung cancer (LC) cases and 1.8 million deaths were predicted worldwide in 2018, representing the leading cause of cancer morbidity and mortality (1,2). Brain metastasis (BM) was the most prevalent intracranial tumor in adults, commonly developing in LC patients (3-5). Generally, BM shows poor prognosis; approximately 90% of patients died within two years after initial diagnosis and median survival ranges from 7 to 10 months, with significant worsening of quality of life (6,7).

It is critical to identify high-risk patients with BM and conduct targeted screening. Yet, the National Comprehensive Cancer Network (NCCN) suggests that brain MRI should only be recommended for patients diagnosed with stage II to IV and high-risk stage 1B non-small-cell lung cancer; no unanimous screening guidelines for identifying BM exists, until now (8,9). Previous studies found several risk and prognostic factors for BM, shedding light on methods to identify high-risk patients, predict survival, and conduct targeted therapy (10-13). However, due to the relatively small sample size, the results were not consistent (7,14,15).

Surveillance, Epidemiology, and End Results (SEER) is an open-access database comprising approximately 30% of the total US population. SEER collected complete social demographics and clinical data for assessment of characteristics of cancer epidemiology worldwide. The present study aims to investigate BM prevalence in LC patients, determine risk and prognostic factors, and construct nomograms for predicting BM development and prognosis in LC patients using the SEER database. We present the following article in accordance with the TRIPOD reporting checklist (available at http://dx.doi.org/10.21037/tcr-20-2745).

The data about cancer in the SEER database is continually reported in every state of the United States and retrieved with no need for informed patient consent. The present study complied with the Declaration of Helsinki (as revised in 2013).

A total of 266,522 eligible LC patients were identified between January 1, 2010, and December 31, 2016. The inclusion criteria were as follows: (I) aged 18 years or older; (II) diagnosed as the first and only malignant cancer; (III) only one primary site; (IV) diagnosis not obtained from a death certificate or an autopsy; (V) with definite BM information at primal diagnosis of LC. Patients diagnosed before 2010 were excluded because the SEER did not record BM information until 2010. The flow-chart for the population selection was shown in Figure S1.

The calibration of the nomograms was assessed by calibration plots, which was generated by adopting a regression smoothing method and bootstrapping with 100 resamples to estimate the calibration of nomograms, where the consistency between observed and predicted probabilities of occurrence of BM and 1, 3 and 5-year survival was presented graphically.

The randomly splitting method was adopted as the method of internal validation to evaluate the stability of the nomograms. The ROC curve was constructed to evaluate the performance of the construction and validation, and the difference in the AUC was tested by DeLong’s test. To evaluate the external performance of survival predicted nomogram, an external validation set that consisted of LC patients with de novo BM in 2016 was selected from the same database, and the calibration curve for evaluating the performance in predicting 1-year was generated based on the conducted program. The construction and validation of the nomogram were conducted using the rms package in R version 3.4.1 (R Foundation for Statistical Computing, Vienna, Austria; www.r-project.org). Other statistical analyses were performed using the Statistical Package for the Social Sciences (SPSS) version 23.0 software package for Windows (SPSS, Inc.). Statistically significant levels were set two-tailed at P<0.05. 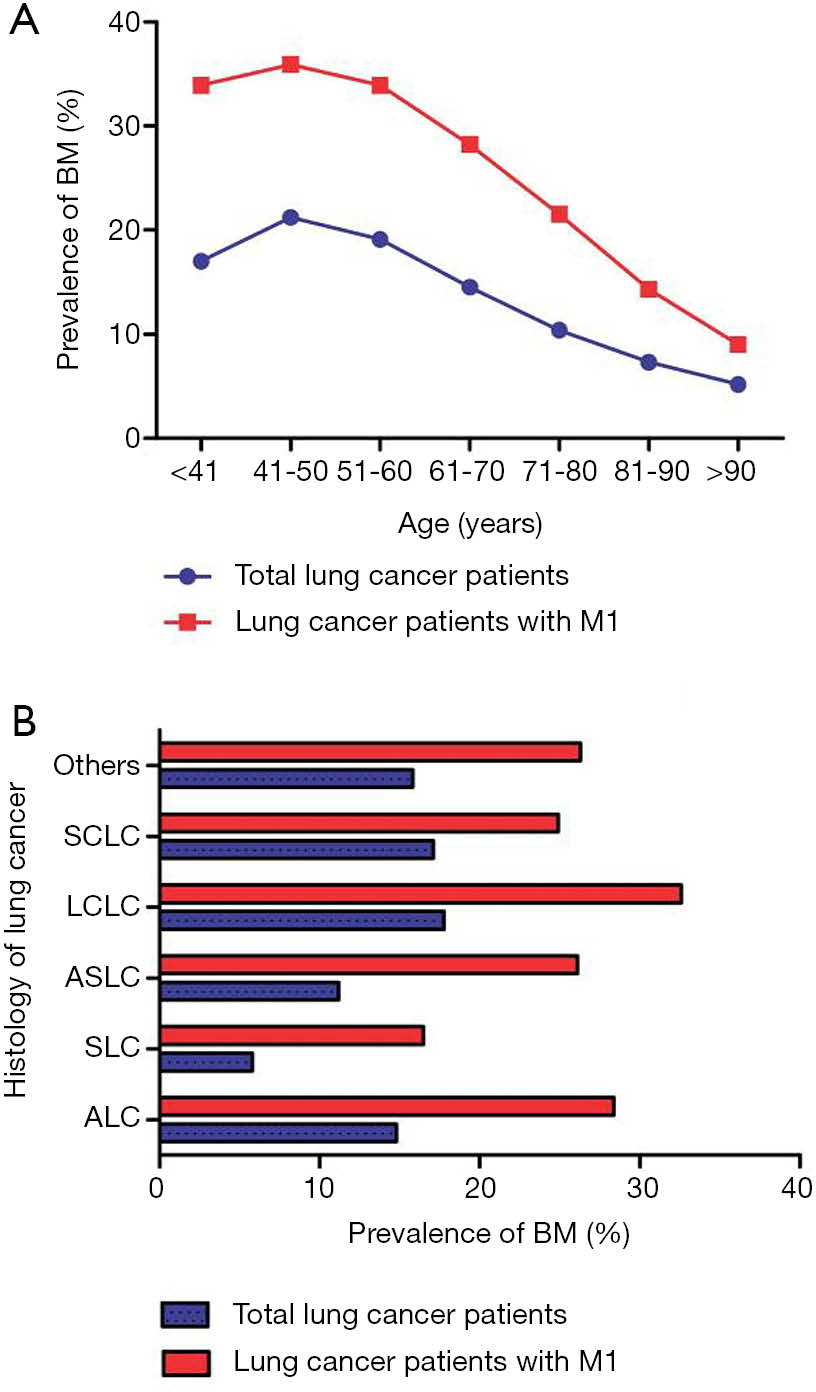 Figure 1 The prevalence of BM in LC patients with metastasis or not. (A) Stratified by age; (B) stratified by histology. BM, brain metastasis; LC, lung cancer.

Construction of nomogram to predict BM development and performance assessment

Based on the aforementioned BM risk factors, a nomogram was constructed to accurately predict the probability of BM development (Figure 2A). The AUC of the ROC curve 73.1% (95% CI: 72.6–73.6%), indicating good discrimination (Figure 2B). The stability of this prediction model was validated by random splitting method; the AUC values of the construction and validation models were 72.5% (95% CI: 72.0–72.9%) and 72.6% (95% CI: 72.3–72.9%), respectively, with no significant difference (D =−0.43; P=0.67) (Figure 2B). The calibration curve revealed good agreement between predicted and observed probabilities for BM occurrence, indicating good calibration ability of the nomogram (Figure 2C). 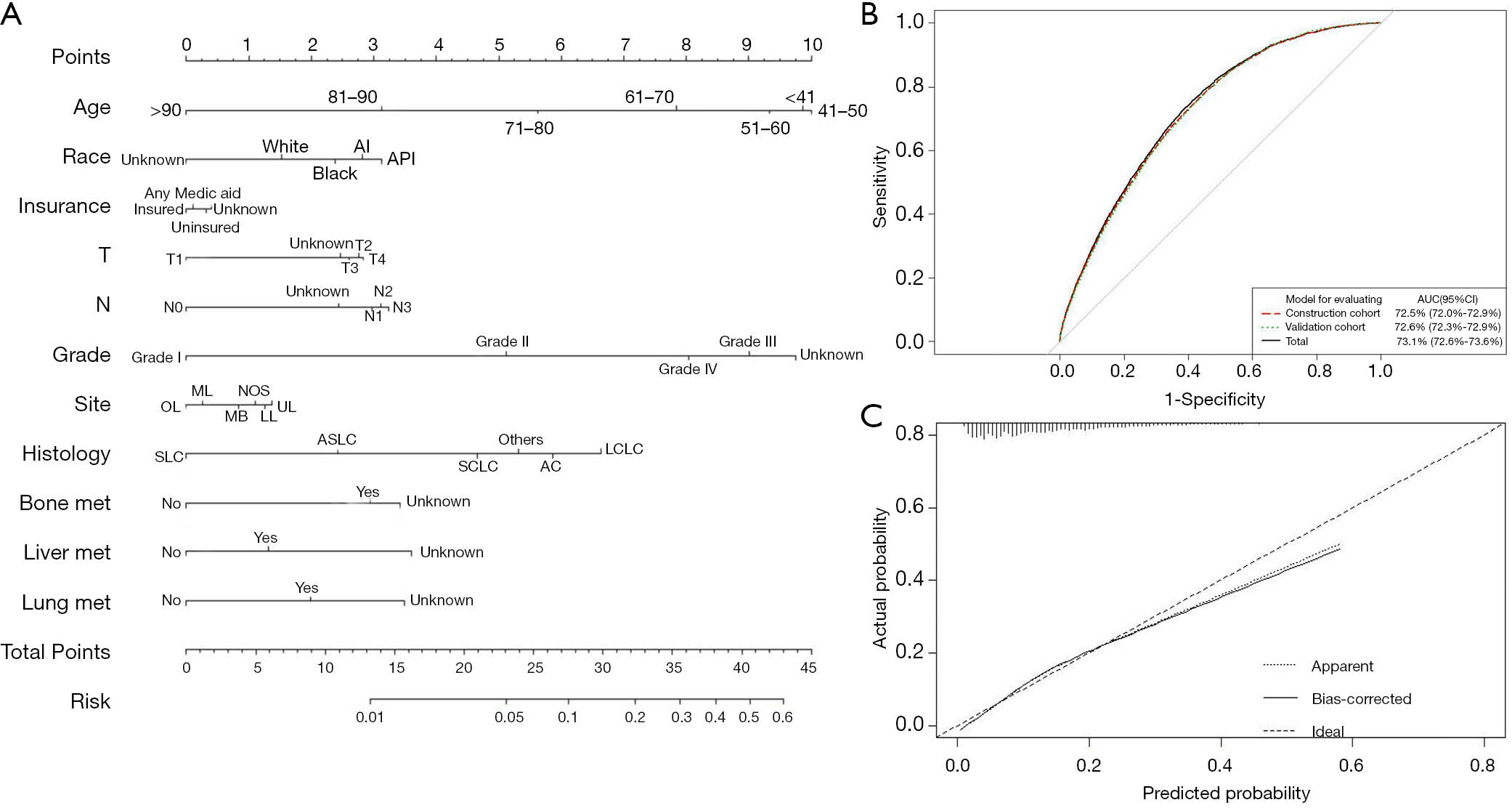 Figure 2 The nomogram for predicting BM in LC (A), ROC curve and randomly splitting method for evaluating the performance and stability of the nomogram. (B) and the calibration curve for estimating the predictive accuracy of the nomogram (C). BM, brain metastasis; LC, lung cancer.

Construction of nomogram to predict prognosis and performance assessment

The survival prediction nomogram was constructed based on the prognostic factors for predicting the 1-year, 3-year, and 5-year OS of LC patients with BM (Figure 3A). The overall C-index was 0.88 (95% CI: 0.87–0.89), indicating the nomogram has satisfactory performance in distinguishing those who have terminal events from those who do not. The calibration curve has good performance for predicting 1-year (Figure 3B), 3-year (Figure 3C), and 5-year (Figure 3D) OS. Additionally, LC patients diagnosed in 2016 were selected to validate nomogram performance; the calibration curve suggested good agreement between predicted and actual probability curves (Figure 3E). 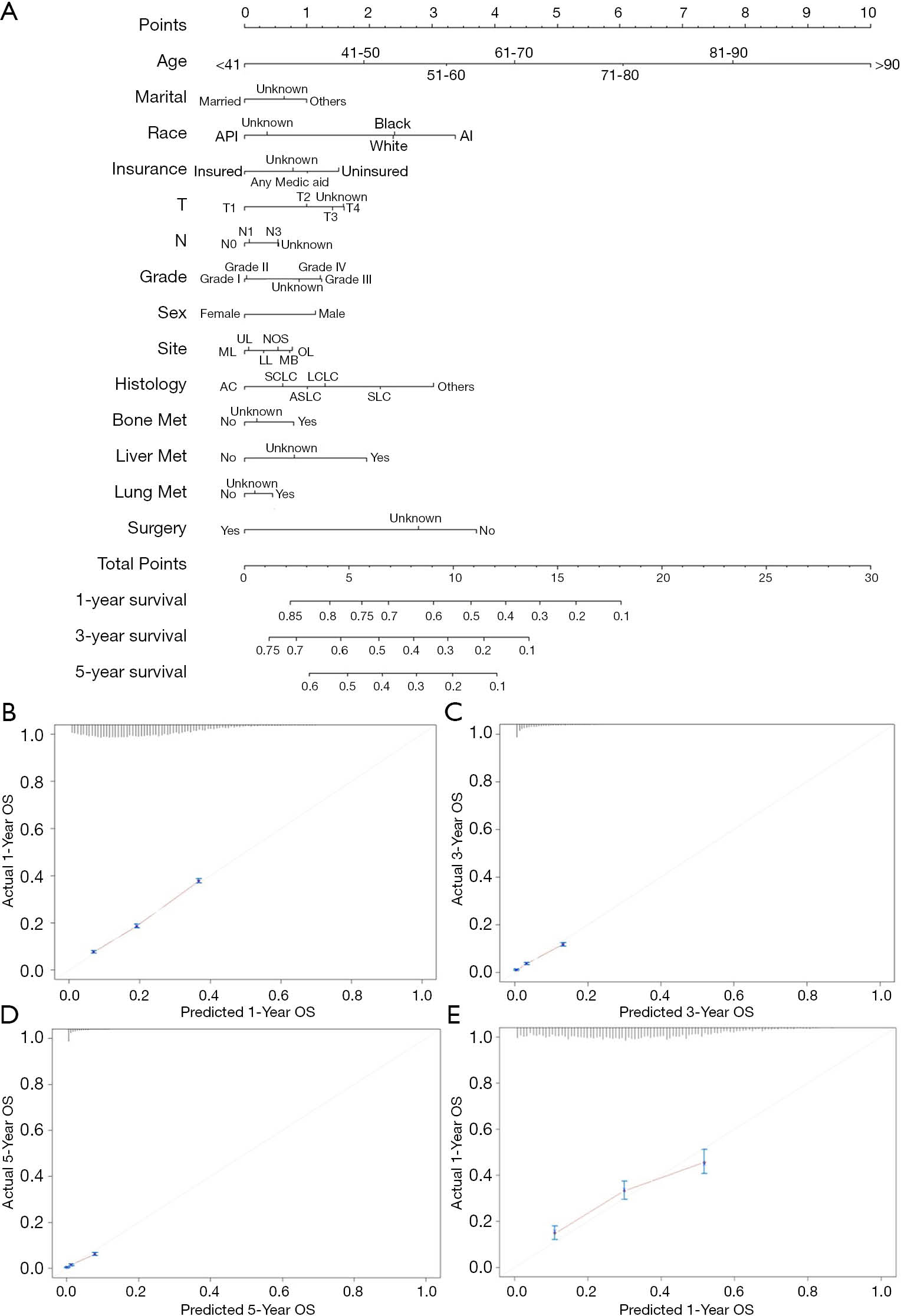 Figure 3 The nomogram for predicting prognosis of LC patients with BM (A) and the calibration curve for evaluating the performance in predicting 1-year (B), 3year (C), 5-year (D) and external performance in 1-year (E) survival probability. BM, brain metastasis; LC, lung cancer.

The present study comprehensively describes BM prevalence in patients initially diagnosed with LC in the SEER cohort; then, risk and prognostic factors associated with BM were detected. We constructed two nomograms to predict the development and prognosis of LC patients, respectively. Our results showed that BM prevalence in LC patients was 13.33%, consistent with previous studies that ranged from 10.4% to 19.9% (3,16). In accordance with the consequence of risk factors analysis, we specified that BM diagnosis is more likely among LC patients with the following features: 41 to 60 years of age, API race, any Medicaid status and uninsured status, tumor location in upper lobe and lower lobe, higher T stage, more lymphatic metastasis (N), higher grade stage, presence of metastases outside of the brain, and AC histological subtype. Part of the above risk factors has also been determined in previous studies (17-20). It is worth noting that a few previous works found a higher incidence of BM in women with NSCLC than in men (3,21,22). We observed no significant differences in BM incidence of LC without specific histological subtype according to sex. More studies are warranted to determine the potential cause.

A cohort of 28,526 LC patients with BM who received follow-up for over one year was utilized for survival analysis. Results suggest that the median OS is 4 months, correlating with previous findings (4,22). It has been widely discussed in many pieces of research that older age, poor tumor grade, extracranial metastases, non-AC histological subtype, and absence of definitive therapy were negative relevant predictors in the prognosis of LC patients with BM (23-26). In the present study, we found that patients with the following features also had less favorable outcomes: male, uninsured status, higher T stage, lymph node involvement, and main bronchus tumor location. No previous studies reported that API race patients had better survival than other races; however, this was determined in our study. A previous study reported that tumor location in the main bronchus is an independent risk factor for distant metastasis of lung adenocarcinoma. Interestingly, in this study, it was found that patients with LC in the main bronchus are less likely to develop BM than those without main bronchus location, yet have relatively poor prognosis (27). Further research is needed to reveal the potential cause.

National Comprehensive Cancer Network (NCCN) guidelines do not recommend BM screening for patients who are asymptomatic and in clinical stage I (9). While brain imaging has been increasingly applied to newly-diagnosed LC patients, there are still many missed diagnoses of BM in early-stage LC or asymptomatic patients (28). To achieve timely BM screening for the suitable population, an easy operating prediction nomogram was constructed from our data set. A quantified metastatic risk could be generated utilizing the constructed nomogram based on established risk factors, including: age, race, insurance status, primary tumor site, primary tumor, N stage, tumor differentiation grade, presence, or absence of metastases in the liver or bone, and histology. Nomogram performance was evaluated from two aspects; it is qualified for predicting the risk of BM development. Moreover, internal validation results indicated excellent stability of this model’s predictive accuracy.

Many parameters influence the treatment choice for LC patients with BM (25). It is vital to determine more effective treatments to achieve longer survival and better quality of life (23). The nomogram for predicting OS was built based on factors determined by multivariate Cox regression analysis; the C-index was 0.88, with the addition of the calibration curve proving the model’s prediction capacity. In some previous studies, different scoring systems to evaluate the prognosis of LC patients with BM were established: Recursive Partitioning Analysis (RPA), Gaspar et al. (24); Diagnosis-Specific Graded Prognostic Assessment (DS-GPA), Sperduto et al. (29); Graded Prognostic Assessment for Lung Cancer Using Molecular Markers (Lung-molGPA), Sperduto et al. (19). From these, we have learned that other factors—such as number of brain metastases, gene alterations, and treatment for brain metastases—contribute to patient survival.

Our study had several limitations arising from the SEER database itself. First, the actual BM rate in LC patients may be underestimated due to non-recording in asymptomatic cases and missed information related to BM development during disease course. Second, patient data regarding comorbidities, smoking history, and molecular biological characteristics are not available; these were supposed to be the underlying risk and prognosis factors. Third, due to data access limitations, the specific treatment program of study subjects could not be obtained. Finally, the follow-up period for the external validation group was short. These limitations may affect the model’s predictive accuracy. Still, the calibration and discrimination ability of the prediction model reached a high level, suggesting the prediction model may be applied to a more extensive and heterogeneous population; considering the deficiencies of the external validation set, the research results must be further verified.

In LC patients, BM was highly developed with a prevalence of 13.33%, varying with age. The prognosis of LC patients with BM was relatively poor with a median OS of four months. Our nomograms showed good performance and stability in predicting BM development and prognosis, possibly aiding clinicians in identifying high-risk patients and tailoring treatment regimens for LC patients with BM.

We thank Xin Wang for his contribution on collecting data and editing the language of the manuscript. This study used the linked SEER-Medicare database. The interpretation and reporting of these data are the sole responsibility of the authors. The authors acknowledge the efforts of the National Cancer Institute; the Office of Research, Development and Information, CMS; Information Management Services (IMS), Inc.; and the Surveillance, Epidemiology, and End Results (SEER) Program tumor registries in the creation of the SEER-Medicare database.

Reporting Checklist: The authors have completed the TRIPOD checklist. Available at http://dx.doi.org/10.21037/tcr-20-2745

Conflicts of Interest: All authors have completed the ICMJE uniform disclosure form (available at http://dx.doi.org/10.21037/tcr-20-2745). The authors have no conflicts of interest to declare.

Ethical Statement: The authors are accountable for all aspects of the work in ensuring that questions related to the accuracy or integrity of any part of the work are appropriately investigated and resolved. The study was conducted in accordance with the Declaration of Helsinki (as revised in 2013). The data about cancer in the SEER database is continually reported in every state of the United States and retrieved with no need for informed patient consent.