Squamous cell carcinoma of the tongue (TSCC) is the most common malignancy of the head and neck, and has shown a tendency of increase in prevalence in the young population. To date, the prognosis of tongue cancer is usually affected by lymph node metastasis, which hampers the overall health of patients (1,2). LncRNAs have rised extensive attention as an significant component of gene regulation network, long non-coding RNA HOTAIR (lncHOTAIR) is the first lncRNA recognized as having reversely transcriptional effects (3). Recently, it has been reported to contribute to the pathogenesis of malignancy by inhibiting the anti-oncogene in patients with breast, bladder, and esophageal cancer (4-6). Epithelial-mesenchymal transition (EMT) is the major route of migration and metastasis of cancer cells, including TSCC. According to the previous description, HOTAIR was highly expressed in TSCC tissues compared with the adjacent normal tissues (7). Besides, malignant patients with over-expression of HOTAIR usually show poor prognosis and lymph node metastasis (8). These features led us to investigate the roles of HOTAIR in the pathogenesis of TSCC.

In this study, we explored the lncHOTAIR expression in Tca8113 and TSCCA cells. Besides, we determined the expression of EMT and Notch signaling ligands including Jagged-1, Notch-1 receptor, and downstream Hes-1 protein, to identify whether there was a potential link between RNA HOTAIR and EMT or the Notch signaling pathway.

We purchased TSCCA and Tca8113 cells from the Chinese Academy of Medical Science. Cells were cultured in high glucose medium (HyClone, South Logan, UT, USA) containing 10% fetal bovine serum (FBS, HyClone, South Logan, UT, USA) at 37 °C in 5% CO2. The medium was replaced every 48 h. The study protocols were approved by the Ethical Committee of The First Affiliated Hospital of Xinjiang Medical University (No. K202012-05).

The cells were divided into two groups, an experimental group (siRNA-1 group, siRNA-2 group, siRNA-3) and a negative control group (NC group). The sequences for siRNA-1, siRNA-2, and siRNA-3 were as follows:

Total RNA was extracted from the cell lines with Trizol reagent. The complementary (c)DNA synthesis was carried out using a commercial reverse transcription kit (QIAGEN, Hilden, Germany) according to -the instructions of the reagent. Real-time polymerase chain reaction (qPCR) was carried out in a total volume of 20 µL containing 10 µL SybrGreen qPCR mastermix 10 (QIAGEN, Dusseldorf, Germany), 0.5 µL each specific primer, and 1 µL cDNA template. The PCR conditions consisted of denaturation at 94 °C for 2 minutes, followed by 40 cycles of denaturation at 95 °C for 10 seconds, annealing at 56 °C for 30 seconds, and extension at 72 °C for 60 seconds. Primer sequences were as follows: HOTAIR primer sequences, 5'-AAATATGGCGGCGTCTACACGGA-3'; 5'-TCCAGAACCCTCTGACATTTGCCT-3'; glyceraldehyde 3-phosphate dehydrogenase (GAPDH) primer sequences, 5'-GAAGGTGAAGGTCGGAGTC-3'; 5'-GAAGATGGTGATGGGATTTC-3'. The mRNA level was normalized by GAPDH. We use 2 (−ΔΔCt) calculated the results of real-time PCR amplification (8).

Cells were seeded on 96 wells, and then the margins were washed using a phosphate buffered saline (PBS) buffer. The 3-(4,5-dimethylthiazol-2-yl)-2,5-diphenyl tetrazolium bromide (MTT) (Boster Biotech, Wuhan, Hubei, China) was added at about 0, 24, 48, and 96 h after transfection, followed by replacing with dimethyl sulfoxide (DMSO) 4 h later. The mixture was incubated in an incubator for 5–10 minutes. The absorbance values of the experimental group and the blank control group were determined by enzyme-linked immunosorbent assay (ELISA) at 570 nm. The survival rate was the ratio of the optical density (OD) value between the experimental group and the blank control group. The test was performed at least in triplicate.

The cells were seeded on 6-well plates, and a perpendicular direction scratch was performed after transfection. Then, the plates were washed using PBS buffer, and then the migration was recorded at 0 h and 48 h, respectively. The images were analyzed using the Image J software (https://imagej.net). The test was performed at least in triplicate.

About 24 h after transfection, the cells were incubated on the upper Transwell chamber (Corning, Corning, NY, USA) containing no serum. In the lower chamber, there was high glucose Dulbecco’s Modified Eagle Medium (DMEM) containing 10% FBS. In the invasion assay, we put the Matrigel (Corning, Corning, NY, USA) in the upper compartment. The cells were incubated for 24 h in an incubator, followed by cleaning of the upper cells using a cotton bud. The cells migrated to the lower chamber were fixed using paraformaldehyde, and then stained with 0.1% crystal violet for 20 minutes. Subsequently, the cells were washed 3 times using PBS. A total of 5 visual fields were randomly selected under a magnification of 10×.

Extract total proteins from cells, and then the protein content was evaluated. The protein was separated by electrophoresis on a 10% sodium dodecyl sulphate-polyacrylamide gel electrophoresis (SDS-PAGE) gel and transferred to a Hybond-P polyvinylidene difluoride (PVDF) membrane. The membrane was blocked in 5% nonfat milk and incubated with Notch-1, Hes-1, Jagged-1, E-cadherin, and vimentin antibodies (1:1,000, CST, Danvers, MA, USA) 4 °C for the night. Then, incubation with the horseradish peroxidase (HRP)-conjugated secondary antibody (1:2,000, CST, Danvers, MA, USA) and leave them at room temperature for 1 hour. After washing with PBS, the bound primary antibody was visualized with the Enhanced Chemiluminescence System (Amersham, Piscataway, NJ, USA) and exposed to film. -The same approach was applied to GAPDH (Solarbio, San Diego, CA, USA) for loading control. The relative density was analyzed with the Image J software.

We express all data as the mean plus or minus standard deviation. The statistical software using statistical software SPSS 22.0 (IBM, Chicago, IL, USA) to analysis data. One-factor analysis of variance (ANOVA) was utilized for the multiple group comparison. The Student’s t-test was used for comparison between groups. The software GraphPad Prism 7 (GraphPad, San Diego, CA, USA) was used for the plot. A P value <0.05 was considered statistically significant.

As shown in Figure 1, compared with the normal control, HOTAIR expression was substantial decreased in the Tca-8113 group (P<0.01). Similarly, a significant decrease was noticed in the HOTAIR expression in TSCCA (P<0.01), especially the siRNA-3. On this basis, siRNA-3 was selected for subsequent experiments.

Figure 1 Expression of HOTAIR in the Tca-8113 and TSCCA cells as revealed by real-time PCR.

Effects of HOTAIR silencing on the proliferation of tongue cancer cells

Effects of HOTAIR silencing on the migration of cancer cells 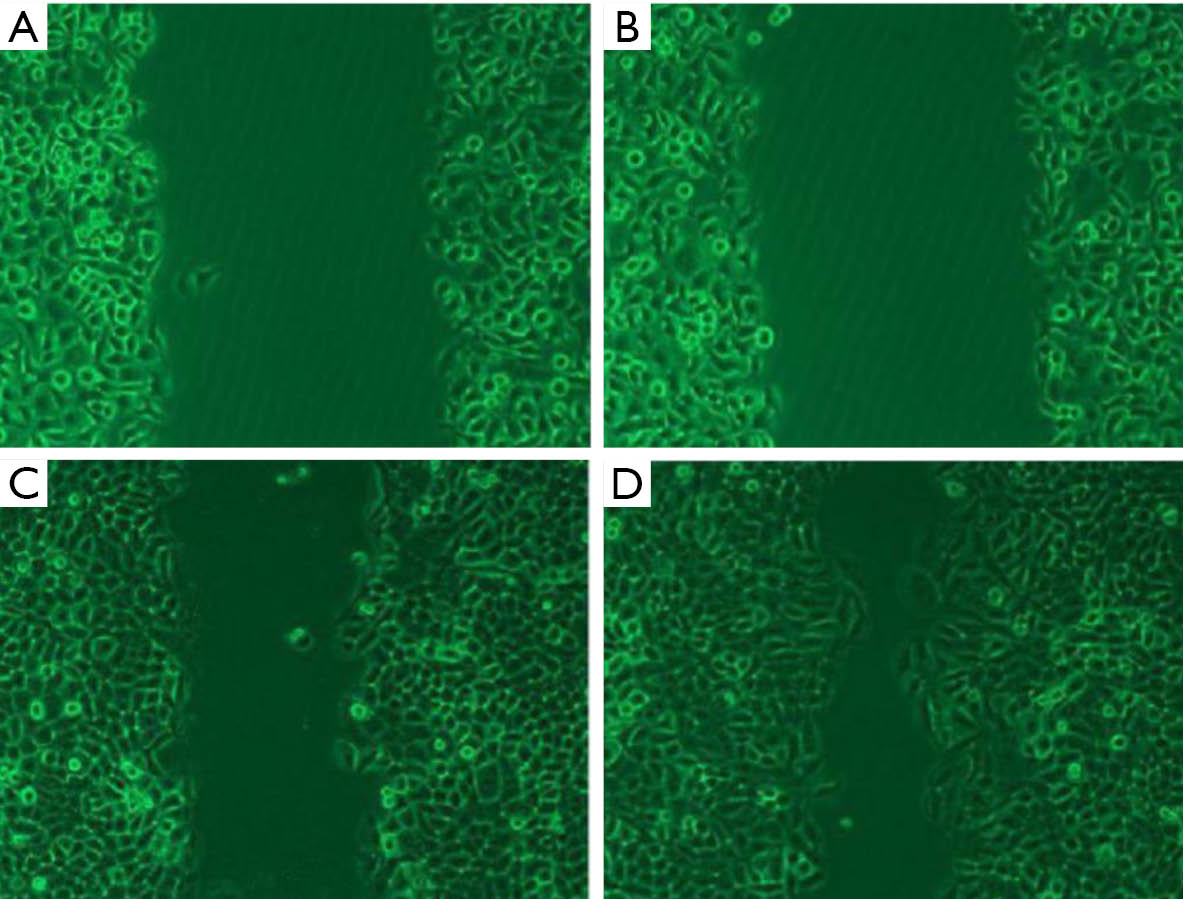 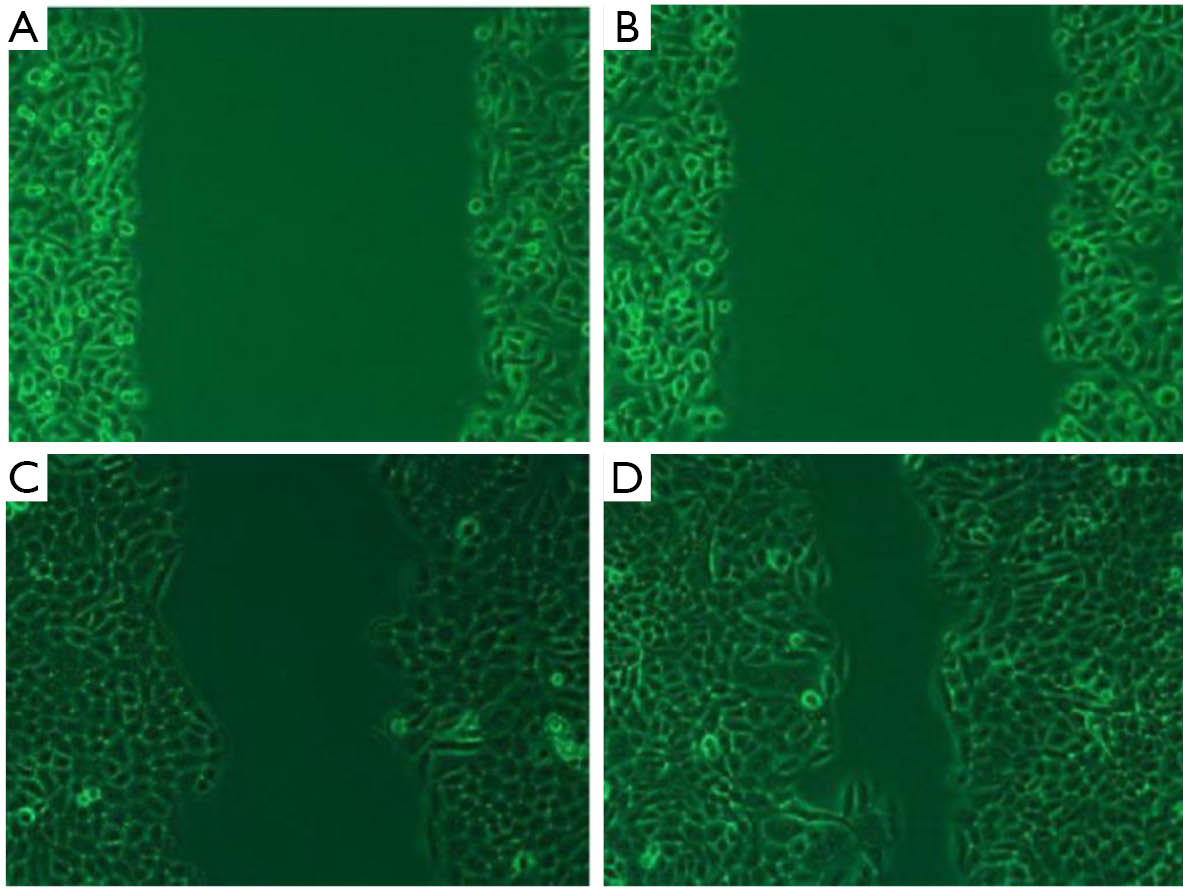 Effects of HOTAIR silencing on the invasion of cancer cells 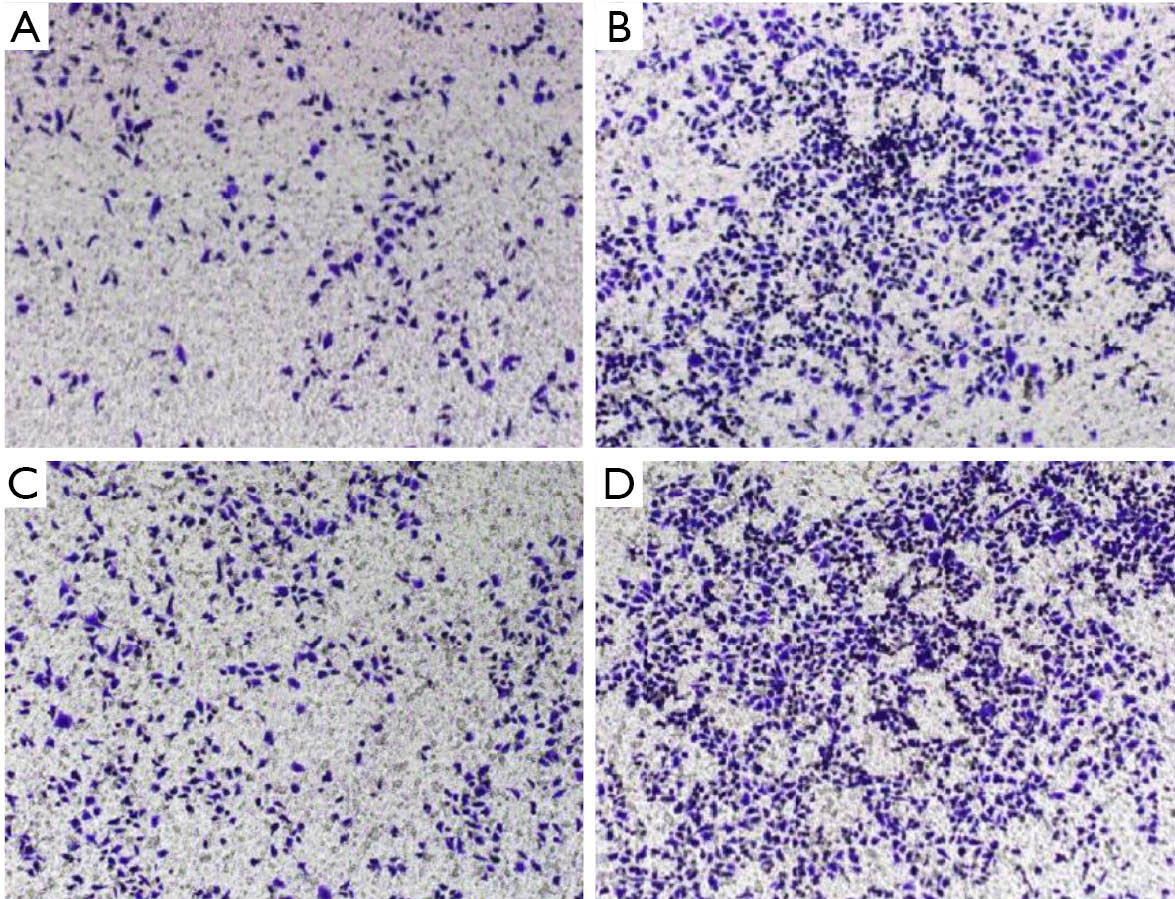 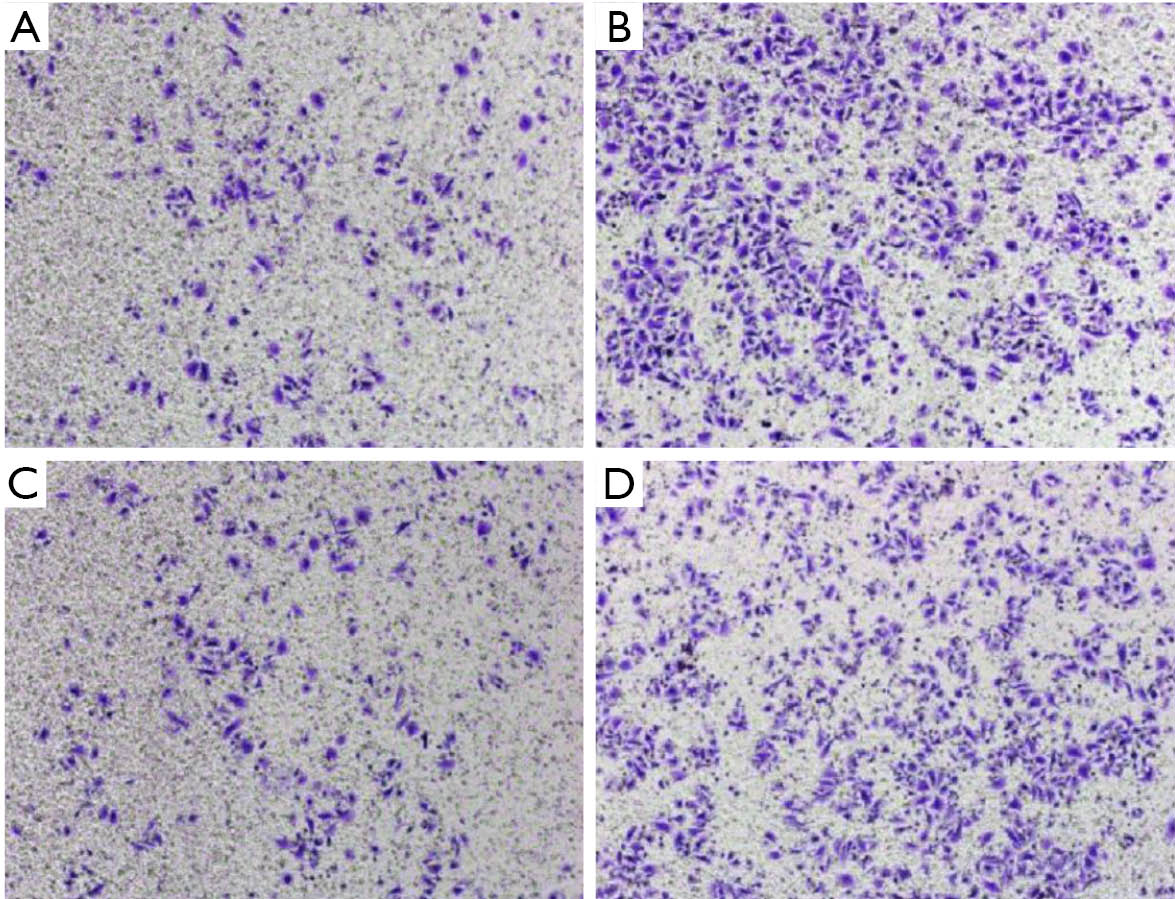 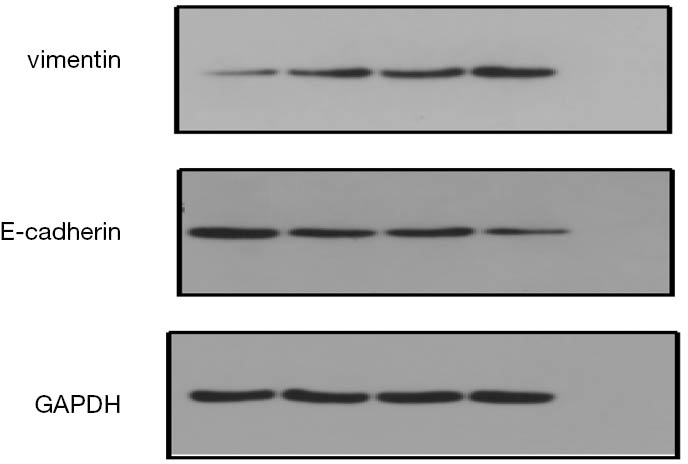 Effects of HOTAIR on the Notch signaling pathway in Tca8113 cells

In the Tca8113 cells, a significant decline was observed in Notch1, Jagged1, and Hes-1 protein expression in the presence of HOTAIR knockdown (P<0.05). Whereas, no statistical differences were discovered in the cells transfected with scramble sequences–contrasted with the blank control (P>0.05, Figure 8). 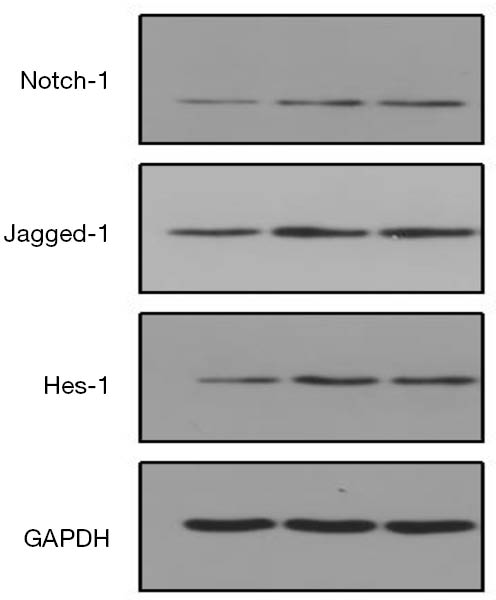 As a novel lncRNA, HOTAIR has been taken a critical role in the regulation of several types of malignancies (9). Nowadays, extensive studies have been focusing on the invasion and metastasis mechanisms of several malignancies (8-12), with the aim of identifying potential targets for treating cancer. HOTAIR is highly expressed in supercutaneous malignancies. HOTAIR regulates target genes through the Hotair5 “structure and 3” structure recruitment protein complex. The high expression of HOTAIR eventually leads to malignant proliferation, reduced apoptosis and distant metastasis of tumor cells, which affects the disease progression of tumor patients and the therapeutic effect of drugs. It has been reported that HOTAIR is aberrantly expressed in several cancers including breast cancer, pancreatic cancer, and esophageal squamous cell carcinoma, which affects the prognosis of these patients (6,8,11-14). In this study, we wanted to explore the effects of lncHOTAIR on the proliferation and migration of Tca-8113 and TSCCA cells. Our data showed that lncHOTAIR could contribute to the invasion and metastasis of these cells.

In this study, we firstly down-regulated the expression of HOTAIR in the TSCCA and Tca-8113 cells. Then, functional testing showed that HOTAIR contributed to the proliferation, migration, and invasion of these cells. In the MTT assay, HOTAIR knock-down led to a decline of absorbance at each time point compared with the control group, which implied that HOTAIR knock-down attenuated cellular proliferation. In terms of invasion, HOTAIR contributed to the invasion of TSCCA and Tca-8113 cells. Similarly, in the migration assay, the number of cells penetrating the small chamber in the treatment group was substantial higher than that of the control group, indicating that HOTAIR resulted in metastasis of these cells. In the invasion tests, the number of cells penetrating the membrane in the experimental groups was significantly higher than that of the control group, which demonstrated that the invasion capacity declined after HOTAIR silencing.

The process of EMT is the premise for the migration and invasion of cancer cells (19). Several factors and signaling pathways could be involved in the EMT process through corresponding receptor signals. In this study, HOTAIR knock-out led to significant decline in the proliferation, metastasis, and invasion of the TSCCA and Tca-8113 cells, which demonstrated that HOTAIR was associated with the pathogenesis, invasion, and migration of TSCCA. After HOTAIR silencing, the expression of E-cadherin was significantly upregulated and vimentin was down-regulated in the cells. This implied that HOTAIR may induce EMT in Tca-8113 and TSCCA cells. Silencing HOTAIR could reverse the EMT phenotype, inhibit EMT, and then inhibit the invasion and metastasis of cancer.

Funding: The study was supported by the Natural Science Foundation of Xinjiang Uygur Autonomous region (2016D01C263).

Conflicts of Interest: All authors have completed the ICMJE uniform disclosure form (available at http://dx.doi.org/10.21037/tcr-20-3452). The authors have no conflicts of interest to declare.

Ethical Statement: The authors are accountable for all aspects of the work in ensuring that questions related to the accuracy or integrity of any part of the work are appropriately investigated and resolved. The study protocols were approved by the Ethical Committee of The First Affiliated Hospital of Xinjiang Medical University (No. K202012-05).