Colorectal cancer (CRC) is the third leading cause of cancer worldwide (1). Defunctioning loop ileostomy is selectively performed during CRC surgery. Although ileostomy cannot prevent leakage itself, a defunctioning ileostomy can minimize the aggravation of clinical symptoms (2). However, the formation of ileostomy could have a great negative impact on the quality of life, including electrolyte disturbances, readmission, increased costs and peristomal dermatitis (3). New stoma patients face significant physical, psychological and body image adaption due to the lack of information with ileostomy care (4,5). Patients often rely heavily on the assistance of specialized stoma care nurses during their hospital stay rather than independently managing their own stoma. Specialized guidance and expertise can improve the quality of stoma-care and problem-solving abilities for new stoma patients (6,7). Patient education was reported to have a positive impact on self-management skills (8).

There is a continued need for further study to test and verify the influence of stoma education on the risk of peristomal dermatitis. A postoperative stoma education class has been held by the stoma team in our institution for a decade, and a retrospective study of 491 CRC patients with ileostomy was carried out. We postulate that well-educated patients will have a lower risk of peristomal dermatitis in the early postoperative period compared to patients who did not participate in the stoma education class. We present the following article in accordance with the STROBE reporting checklist (available at http://dx.doi.org/10.21037/tcr-20-3267).

Our study collected the data of CRC patients who underwent surgery with ileostomy at the Sixth Affiliated Hospital of Sun Yat-sen University from January 2018 to December 2018. Peristomal dermatitis was assessed during the outpatient visit within one month after surgery. And the general demographic information of patients along with the participation in stoma education class and the occurrence of peristomal dermatitis were analyzed.

CRC Patients older than 18 years who underwent ileostomy were eligible for inclusion, and patients with previous abdominal surgery, emergency and/or urgent surgery or who had incomplete or missing follow-up data were excluded.

The study was conducted in accordance with the Declaration of Helsinki (as revised in 2013). The study was approved by the Ethics Committee of the Sixth Affiliated Hospital of Sun Yat-sen University (NO.2020ZSLYEC-040). Informed consent is not needed in this observational and retrospective study.

The stoma education class refers to the theoretical training of stoma nursing held by the stoma team in our research institute every two weeks. The speakers are all certified nurses, and patients, along with their spouses/partners/caregivers were invited to attend the one-hour education within 2 weeks after ileostomy operation. A PowerPoint presentation was prepared that included assessment of the stoma and peristomal skin, assessment of stoma output, stoma-related supplies and resources, nutrition and fluids, activities of daily living, sports and work. Patients and their caregivers were encouraged to both ask questions and share their prior knowledge regarding stoma-related issues to correct inaccurate information. At least one stoma volunteer with more than 5 years of stoma-care experience was invited to the following group discussion to share their experience and to alleviate any exaggerated concerns. Patients and their partners or caregivers were given a hands-on booklet regarding care of ileostomy after class. All patients were shown how to and practiced emptying and changing their pouch at least 2-3 times before the day of discharge by the ward colorectal nurse specialist.

The data of patients were obtained through clinics and telephone follow-up. The researchers extracted the follow-up information of CRC patients with ileostomy from January to December 2018, and the follow-up time was up to January 30, 2019.

Statistical analysis was performed using IBM SPSS Statistics version 25.0. Descriptive statistical methods were performed to characterize the patients and data were presented as median and range. Chi-square tests was used in univariate and stratified analysis was made for the age group (≤60 and >60) and caregiver and diabetes group. Logistic regression models were fitted to calculate OR value and 95% CI of the occurrence of peristomal dermatitis associated with all covariates with a P value of 0.05 or less in univariate comparisons. Differences were considered statistically significant when P<0.05. 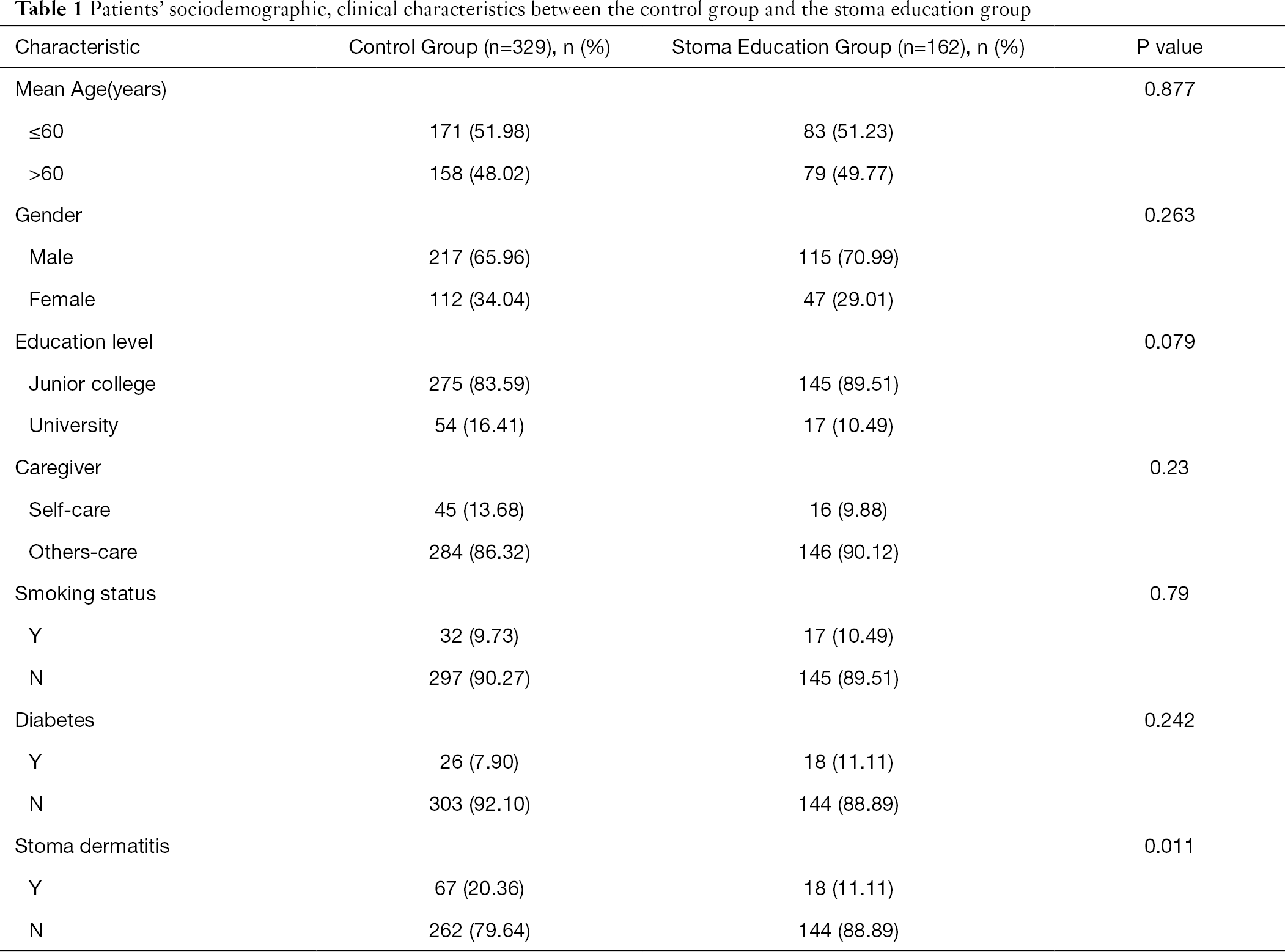 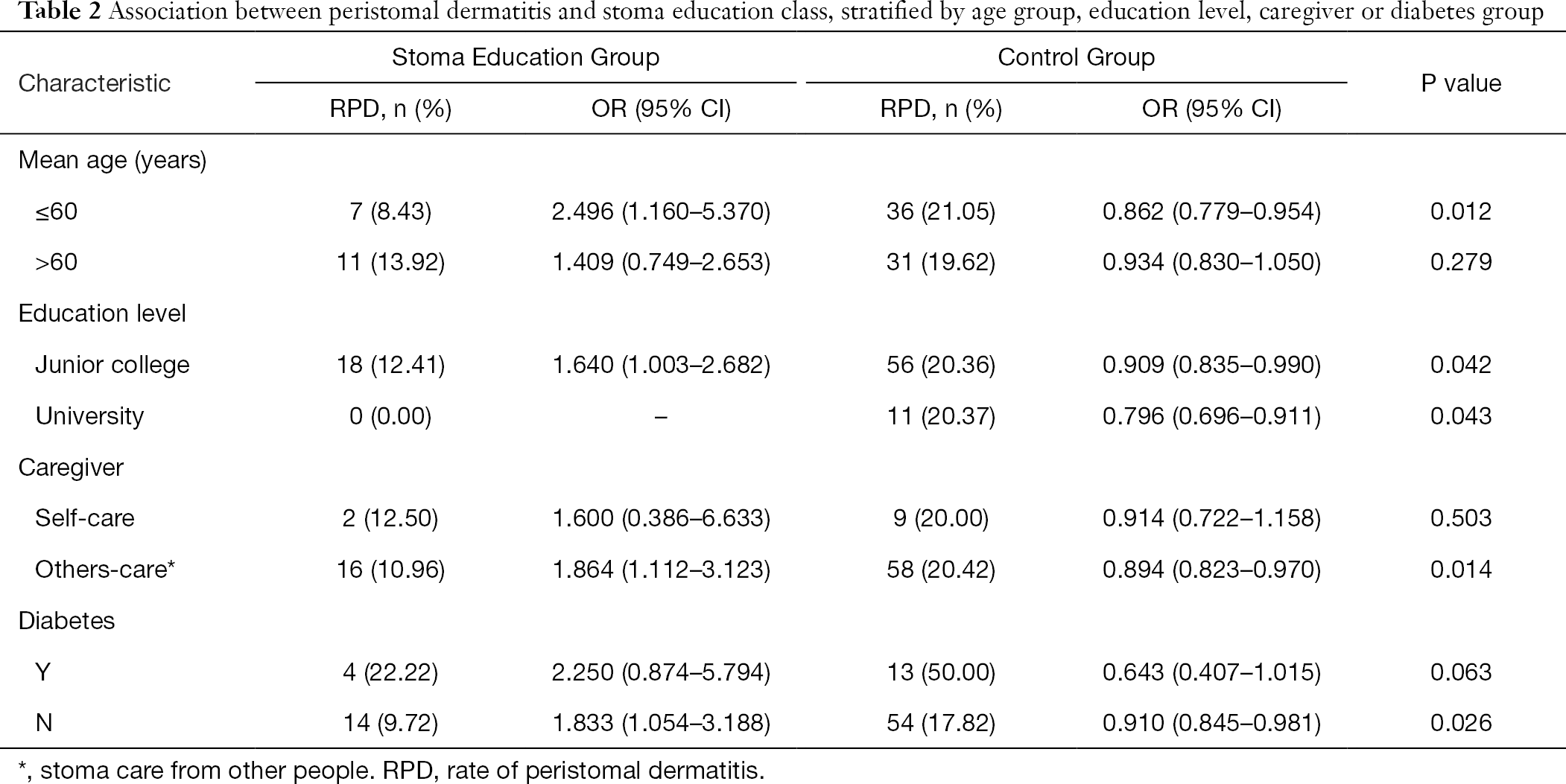 The most common type of stoma complications are peristomal skin problems, retraction, hernia, prolapse and necrosis (15), which are divided into early stage complications and late stage complications according to whether they occurred within one month or not (16). The rates of stoma complications have been reported to range from 10% to 72%, and the rates of peristomal dermatitis were 12% to 62% (16-18). In our study, the rates of peristomal dermatitis was 17.31% in the first 30 days after ileostomy creation. Leakage is a critical factor in the development of peristomal skin complications (19). Inadequate consideration of appliance leakage is of particular significance to patients at times of deep distress and a lack of practical knowledge and skill hinders patients’ mastery of stoma self-care (20). Stoma nurse specialists should pay more attention to teaching patients the knowledge of stoma care and stoma products (21).

Enhanced recovery after surgery (ERAS) care is well established in colorectal surgery in decade years, and is associated with a reduction in length of stay and morbidity rates (22,23). A certain number of patients with stoma failed to receive adequate guidance of stoma nursing during hospitalization. An educational program was recommended to increase the knowledge of stoma-care, resulting in improved stoma self-management for new stoma patients (3,6,24,25). To solve similar problems, under the premise of ensuring that every ostomate receives 2–3 rounds of stoma care skills guidance during hospitalization, our stoma team holds centralized health education for ostomate regularly. It was found that the incidence of peristomal dermatitis in patients who did not participate in the stoma education class was significantly higher (20.36% vs. 11.11%, P=0.011) in our study. Multivariate analysis confirmed that the stoma education class was an independent protective factor (OR =0.458, P=0.008). The results are consistent with the study of Stokes et al. (11), which confirmed that the rate of peristomal dermatitis of patients who participated in a preoperative 2-hour stoma education class was significantly lower. Preoperative education tends to explain the concept of stoma and make preparation such as stoma marking before the stoma operation, while postoperative education pay attention to the nursing knowledge and skills for stoma. What’s more, they complement each other and are beneficial to reduce the peristomal dermal complications. And our institution has carried out preoperative stoma site and preoperative stoma education and we will try to form a systematic and standardized education course in the future.

It was reported that diabetes mellitus may be an independent risk factor for peristomal skin complications. In our study, the results of multivariate analysis suggested that diabetes mellitus was a risk factor for early postoperative peristomal dermatitis in patients with ileostomy (OR =3.732, P=0.001). Patients with stoma should actively treat diabetes and other basic diseases. In our stratified analysis, for patients without diabetes, the rates of peristomal dermatitis was significantly lower in those attending the education class than in those who did not (P=0.026), while there was no significant difference among those with diabetes.

In addition, self-care patients were reported to be happier and to experience higher health-related quality of life, which inevitably results in a reduction of health care costs (28). Our stratified analysis found that for different caregivers, stoma class was significant indicators of peristomal dermatitis in patients who received stoma care from others (P=0.014) while not in patients who practiced of self-care (P=0.503). We supposed that ostomates who practiced self-care paid more attention to ward stoma-care practice and ostomates cared for by others and who attended stoma education class received more effective support from their caregivers. Therefore, we should take actions to improve the nursing level for the self-care patients, especial elderly patients. Maybe we can provide teaching video and technique support during follow-up.

Several limitations need to be noted regarding the present study. First, the content was follow-up data by clinics and telephone, and the data may deviate from the actual situation, and the frequency and severity of peristomal dermatitis were not classified. What’s more, only 32.99% of ostomates in our study participated in the stoma education class, which was largely related to the 2-week interval between stoma education class and the failure of most of patients to participate in stoma education class during their hospitalization. A more effective mode and frequency of centralized health education according to the actual situation should be explored in the near future.

Regardless of education level, a postoperative stoma education class significantly decreased the rate of peristomal dermatitis in the early postoperative period in CRC patients with ileostomy, especially for those who were younger than 60 years, who received stoma care from others and who were without diabetes.

Funding: This research did not receive any specific grant from funding agencies in the public, commercial, or not-for-profit sectors.

Reporting Checklist: The authors have completed the STROBE reporting checklist. Available at http://dx.doi.org/10.21037/tcr-20-3267

Conflicts of Interest: All authors have completed the ICMJE uniform disclosure form (available at http://dx.doi.org/10.21037/tcr-20-3267). The authors have no conflicts of interest to declare.

Ethical Statement: The authors are accountable for all aspects of the work in ensuring that questions related to the accuracy or integrity of any part of the work are appropriately investigated and resolved. The study was conducted in accordance with the Declaration of Helsinki (as revised in 2013). The study was approved by the Ethics Committee of the Sixth Affiliated Hospital of Sun Yat-sen University (NO.2020ZSLYEC-040). Informed consent is not needed in this observational and retrospective study.