The microRNA miR-19a-3p suppresses cell growth, migration, and invasion in multiple myeloma via the Wnt/β-catenin pathway

Multiple myeloma (MM) is the second most common hematological malignancy (1,2) characterized by the uncontrolled growth of monoclonal plasma cells in the bone marrow, resulting in hypercalcemia, bone disease, renal failure, anemia and other complications (3,4). The latest treatments for MM include immunomodulatory drugs (IMID), second-generation proteasome inhibitors (PI), anti-CD38 monoclonal antibodies (MoAb), and chimeric antigen receptor T cell (CAR T cell) therapy (5-8). Although these therapies significantly improve the rate of survival in MM patients, issues of relapse and refractory disease still require urgent attention (9). Therefore, it is necessary to explore the pathogenesis and diagnostic markers of MM to provide new directions for the treatment of MM.

MicroRNAs (miRNAs) are small non-coding RNA with a length of 19–25 bases that regulate gene expression by degrading mRNA or inhibiting its translation (10). In MM, a variety of miRNAs (such as miR-21 and miR-221) are abnormally expressed or dysfunctional. In addition, the miRNAs in the tumor microenvironment regulate MM cell functions through gene/protein targets, signaling molecules, and pathways leading to the transfer of MM cells (11-13). It has been reported that the regulation of miRNAs (such as miR-15a, miR-16, and miR-34) in MM cells could weaken their functional interaction with the bone marrow microenvironment and produce significant anti-tumor activity (10,14). Other studies have demonstrated that miR-19a-3p was abnormally expressed in MM, and promoted cell proliferation and inhibited cell apoptosis by degrading the F-box only protein 32 (FBXO32) mRNA (15). Therefore, miRNAs may be potential therapeutic targets for MM.

The Wnt/β-catenin pathway is widely involved in cell proliferation, tumorigenesis, and metastasis (16-18). Wnt is a type of secreted glycoprotein that interacts with specific receptors on the cell surface and causes β-catenin to accumulate through a series of downstream protein phosphorylation and dephosphorylation processes (19,20). β-catenin enters the nucleus and regulates gene expression (such as cyclin D1 and c-Myc), and promotes tumorigenesis (21). Therefore, inhibiting the activation of the Wnt/β-catenin pathway plays an important role in anti-tumorigenesis.

Since it has been shown that miR-19a-3p is dysregulated in several types of cancer cells (including MM cells), this study hypothesized that miR-19a-3p may be involved in the progression of MM. This investigation explored the novel regulatory mechanisms of miR-19a-3p in MM, and provided new clues for the treatment of MM. We present the following article in accordance with the MDAR reporting checklist (available at http://dx.doi.org/10.21037/tcr-20-3490).

Bone marrow samples from 25 patients with MM and 12 patients with non-hematological diseases were collected in the Affiliated Hospital of Southwest Medical University from May 2017 to May 2018. The collected samples were stored at −80 °C. This study was approved by the Research Ethics Committee of the Affiliated Hospital of Southwest Medical University, and all patients provided signed informed consent. The study was conducted in accordance with the Declaration of Helsinki (as revised in 2013).

The small interfering RNA of Wnt1 (si-Wnt1), the miR-19a-3p mimic, and the pcDNA3.1-Wnt1 vector, as well as their corresponding negative controls (NC) were obtained from Shanghai GenePharma Co., Ltd., (Shanghai, China) and transfected into U266 and RPMI-8226 cells using Lipofectamine 2000 (Invitrogen; Thermo Fisher Scientific, Inc.) following the manufacturer’s protocol. The sequences of miR-19a-3p mimic and si-Wnt1 were listed in Table 1. Cell samples were then harvested for further research.

Cells at the logarithmic growth phase were harvested and digested with trypsin to prepare a cell suspension. The cells were seeded into 96-well plates at a cell density of 2×103 cells/well, and the wells at the edge of the plate were filled with sterile phosphate buffered saline (PBS). After cell culture for 0, 24, 36, 48, and 60 hours, 10 µL of the CCK-8 reagent was added to each well and cultured for a further 4 hours. A microplate reader was used to measure absorption at 450 nm.

U226 cells were transfected with miR-19a-3p mimic and mimic NC and cultured for 24 hours. After trypsin digestion, cell suspension at a cell density of 1×106 cells/mL was made by 1× Banding Buffer dilution. Then cell suspension was added 5 µL Annexin V-FITC and 10 µL PI, and incubate for 15 min at room temperature in the dark. Finally, flow cytometry was used to analyze apoptosis of each sample group.

The transfected cells were seeded into 24-well cell culture plates at a density of 5×104 cells/well. After 24 hours, the cell confluence reached 70–80%. A sterile 10 µL pipette tip was used to gently draw a straight line through the monolayer of cultured cells. After scratching, each well was gently washed with PBS to remove the exfoliated cells. Cells were cultured for a further 48 hours and wound closure was examined under light microscopy.

A 24-well transwell chamber (Corning Inc., Corning, NY, USA) was pre-coated with Matrigel (BD Biosciences, USA). The transfected cells were resuspended with serum-free Dulbecco’s Modified Eagle Medium (DMEM) and then seeded into the upper chamber at a density of 5×104 cells/well. DMEM containing with 10% FBS was added into the lower chamber. After 48 hours at 37 °C, the cells on the lower surface were fixed with 4% methanol for 10 minutes and stained with 0.1% crystal violet for 5 minutes. Invasive cells were observed in six randomly selected fields of view under a light microscope.

The online miRNA target predication databases miRDB and TargetScan 7.2 predicted that the target gene of miR-19a-3p was Wnt1. The wild-type (WT) and mutant-type (Mut) of the 3'UTR of Wnt1 was cloned and amplified by PCR, and the psi-CHECK2™ plasmids containing the wild-type and mutant-type fragments of the 3’-UTR of Wnt1 were constructed. Cells were cotransfected with the miR-19a-3p mimic, the corresponding negative control (NC) mimic, or the Wnt1 WT, or Mut luciferase reporter vector using Lipofectamine 2000 reagent according to the instruction manual. After transfection for 48 hours, the Dual-Luciferase Reporter Assay kit (Promega Corporation) was used to detect Firefly and Renilla luciferase activities following the manufacturer’s protocol. 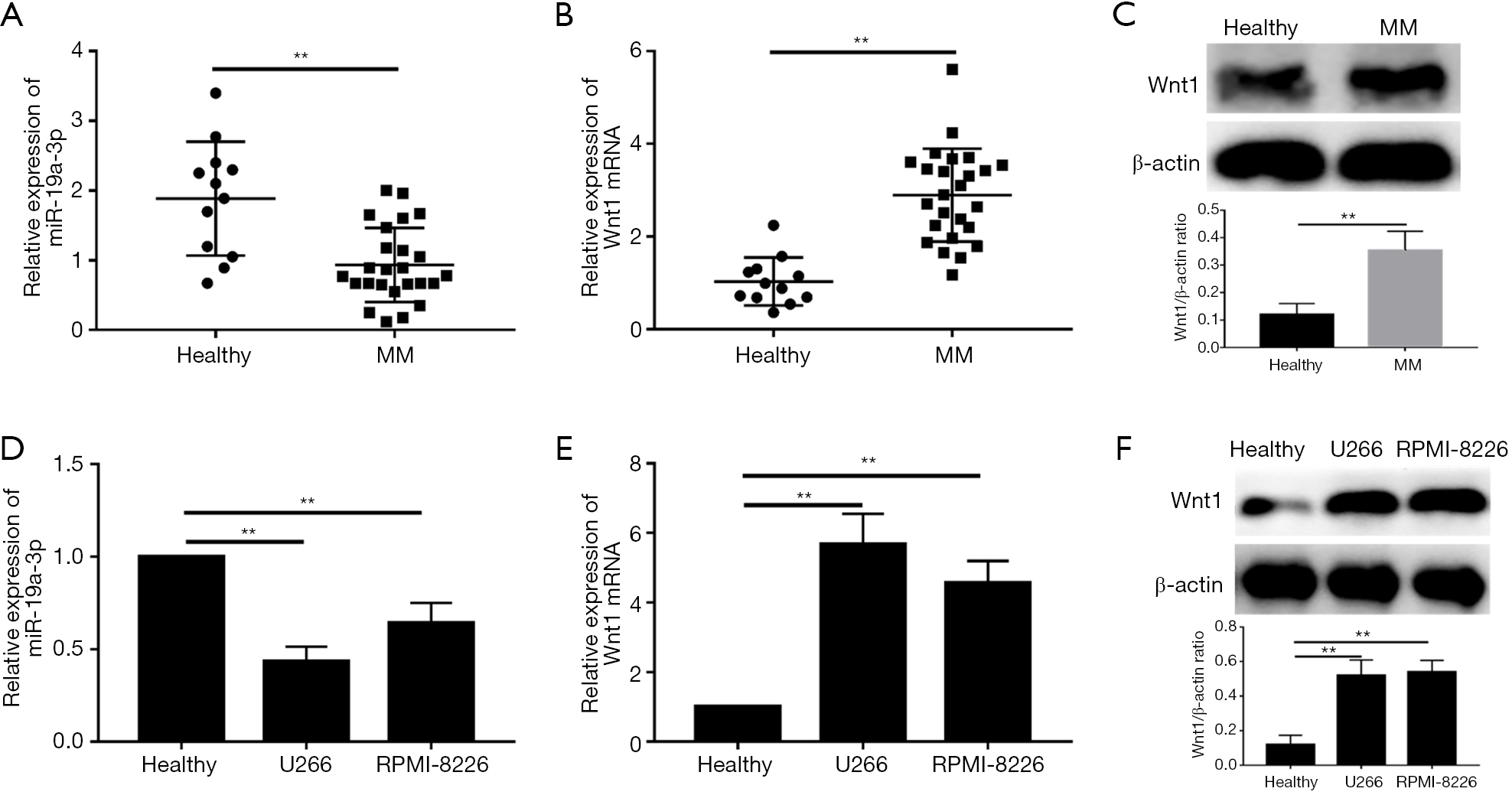 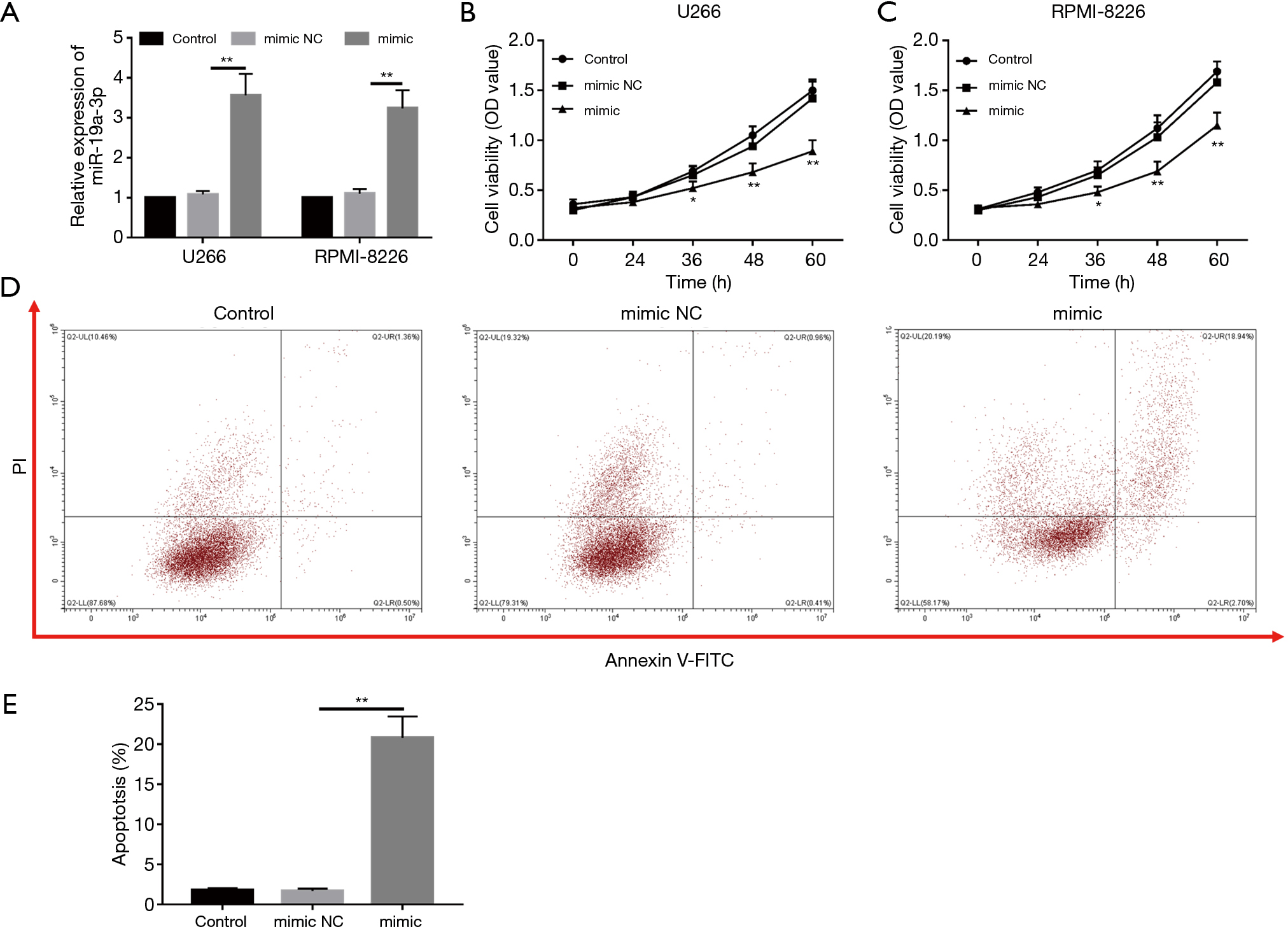 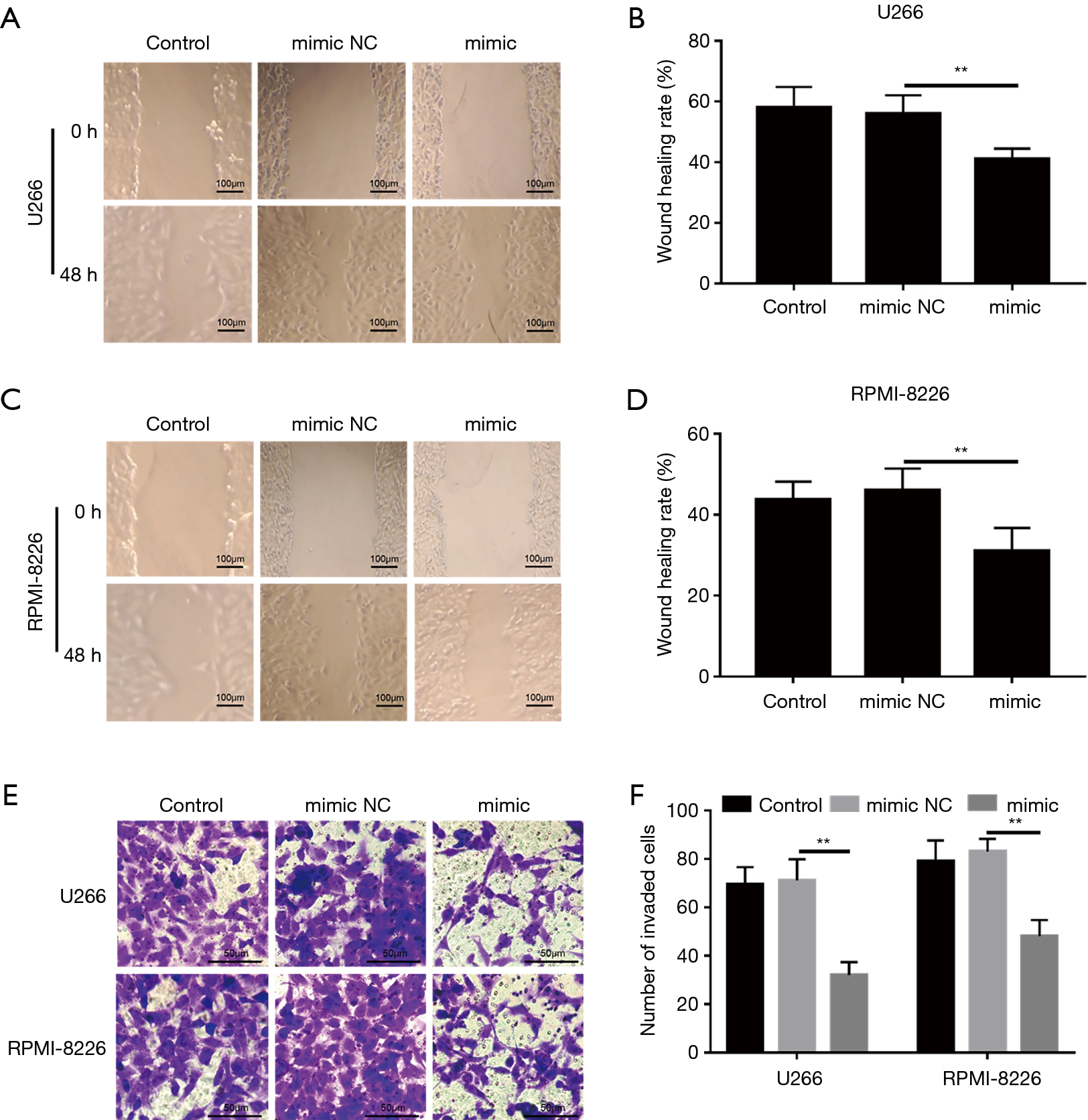 Figure 3 Overexpression of miR-19a-3p inhibited cell migration and invasion in multiple myeloma cell lines. U226 and RPMI-8226 cells were transfected with a miR-19a-3p mimic or a NC mimic. (A,C) The effect of miR-19a-3p overexpression on the migratory ability of U226 and RPMI-8226 cells was evaluated by the wound healing assay (magnification, 100×). (B,D) The wound closure rate was calculated with Image J software. (E) The effect of miR-19a-3p overexpression on the ability of U226 and RPMI-8226 cells to invade was assessed by the transwell invasion assay. The cells in the lower layer of the chamber were fixed with 4% paraformaldehyde for 20 minutes and stained with crystal violet solution for 15 minutes, and finally photographed under a microscope (magnification, 400×). (F) The number of invading cells was counted. **P<0.01. NC, negative control. 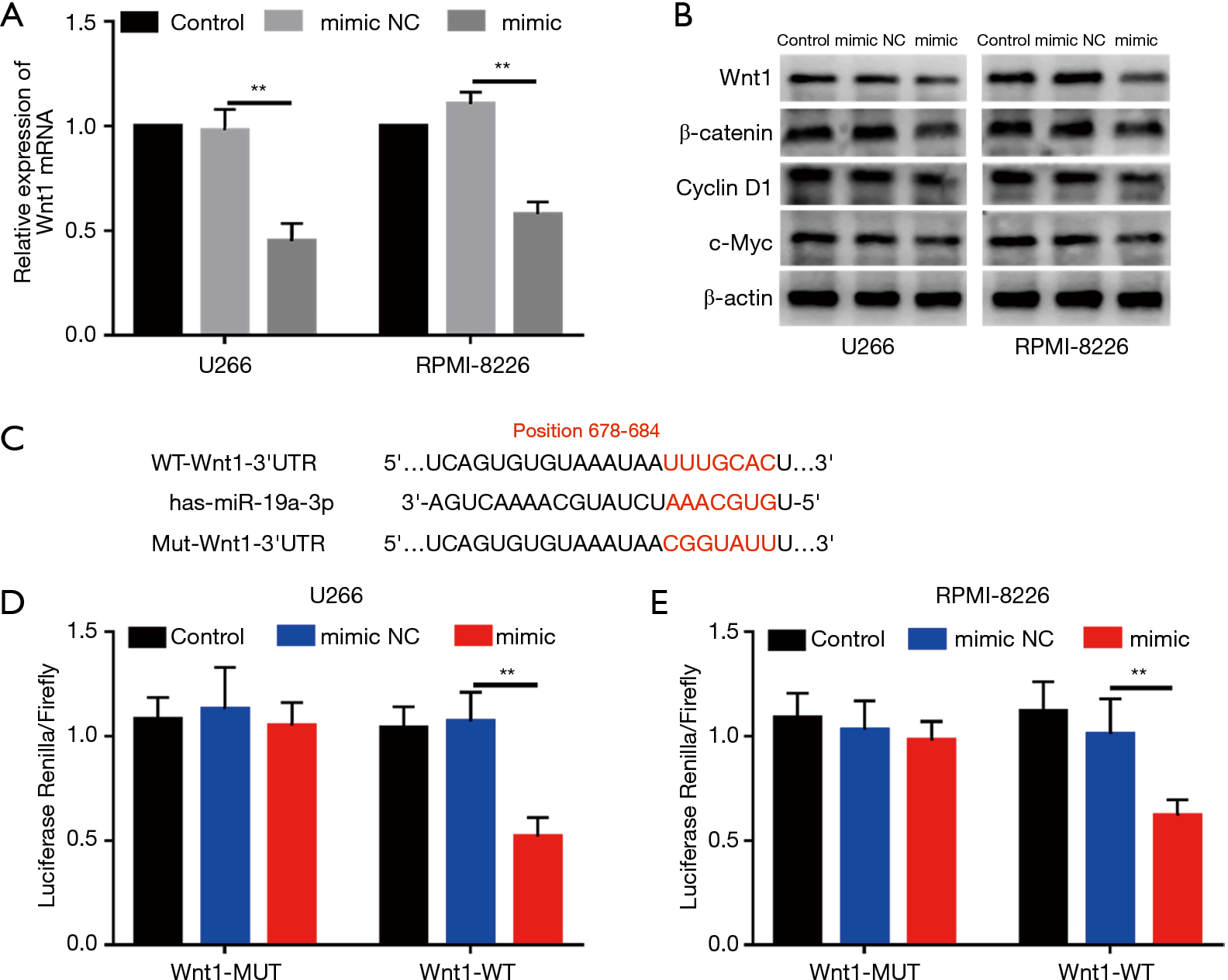 Figure 4 Wnt1 was a direct target of miR-19a-3p. U226 and RPMI-8226 cells were transfected with a miR-19a-3p mimic or a NC mimic. (A) The expression of Wnt1 mRNA in U226 and RPMI-8226 cells was detected using RT-qPCR. (B) Western blot analysis was performed to detect Wnt1, β-catenin, cyclin D1, and c-Myc. β-actin served as internal reference. (C) The sequence of miR-19a-3p revealed complementary pairing with the 3’-UTR of Wnt1. The sequence of the mutant 3’-UTR of Wnt1 is also shown. (D,E) The dual-luciferase reporter assay was performed on both U226 and RPMI-8226 cells. **P<0.01. RT-qPCR, quantitative reverse transcription polymerase chain reaction; NC, negative control.

Silencing of Wnt1 suppressed cell proliferation, migration, and invasion in U266 cells 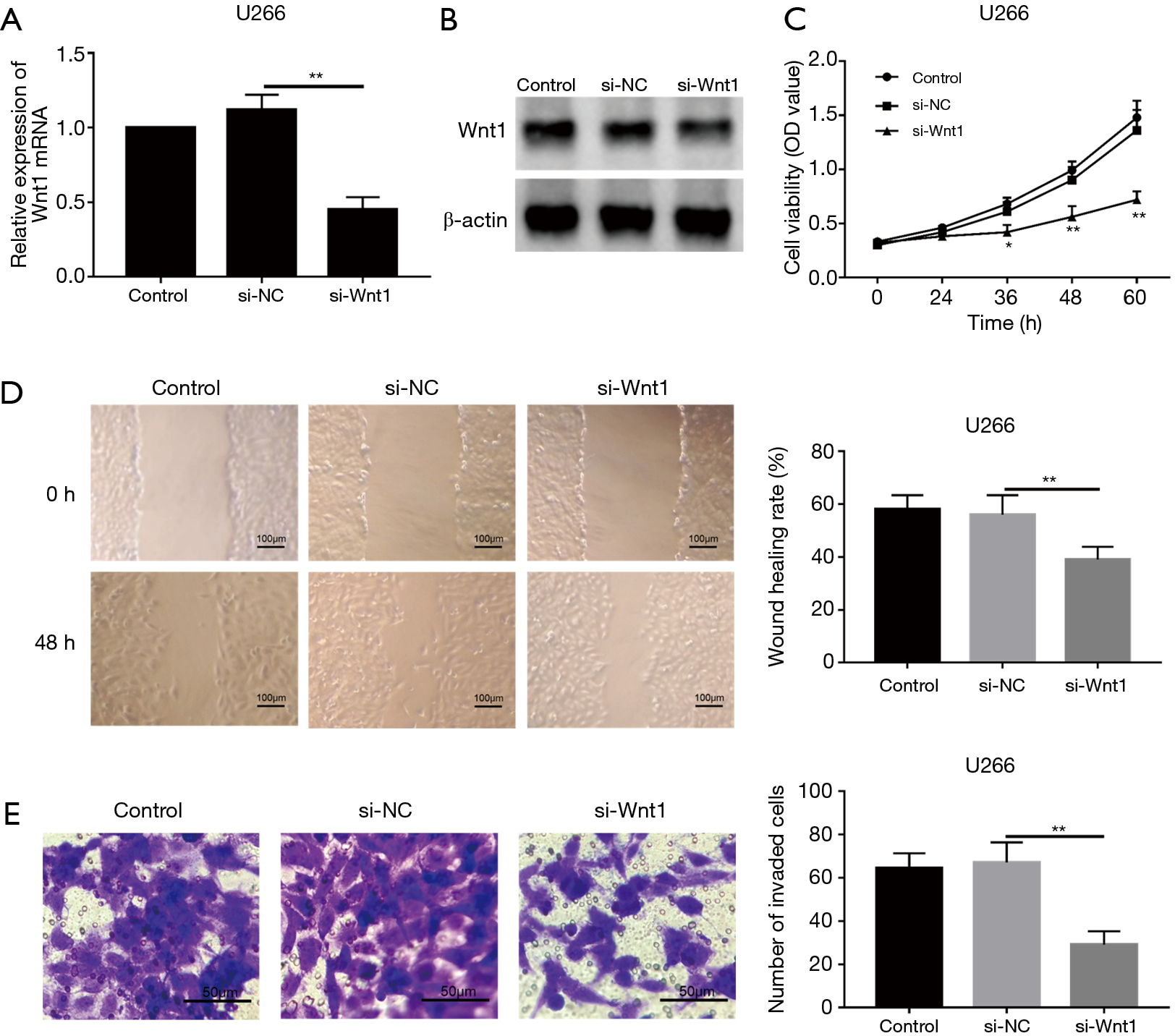 Figure 5 Knockdown of Wnt1 suppressed cell proliferation, migration, and invasion in U266 cell. U226 cells were transfected with 40 nM si-Wnt1 and its negative control si-NC. (A) The mRNA levels of Wnt1 were assessed using RT-qPCR. (B) Western blot was performed to detect Wnt1 protein expression after silencing Wnt1. (C) Cell viability was determined using the CCK-8 kit. (D) Wound healing assay was performed to determine the effect of si-Wnt on the migratory ability of U226 cells (magnification, 100×). (E) Transwell invasion assays were used to detect the invasion ability of U226 cells following knockdown of Wnt1. The cells in the lower layer of the chamber were fixed with 4% paraformaldehyde for 20 minutes and stained with crystal violet solution for 15 minutes, and finally photographed under a microscope (magnification, 400×). *P<0.05; **P<0.01. NC, negative control; RT-qPCR, quantitative reverse transcription polymerase chain reaction; CCK-8, cell counting kit-8.

Wnt1 overexpression partially reversed the suppressive effects of miR-19a-3p on cell proliferation, migration, and invasion in U266 cells 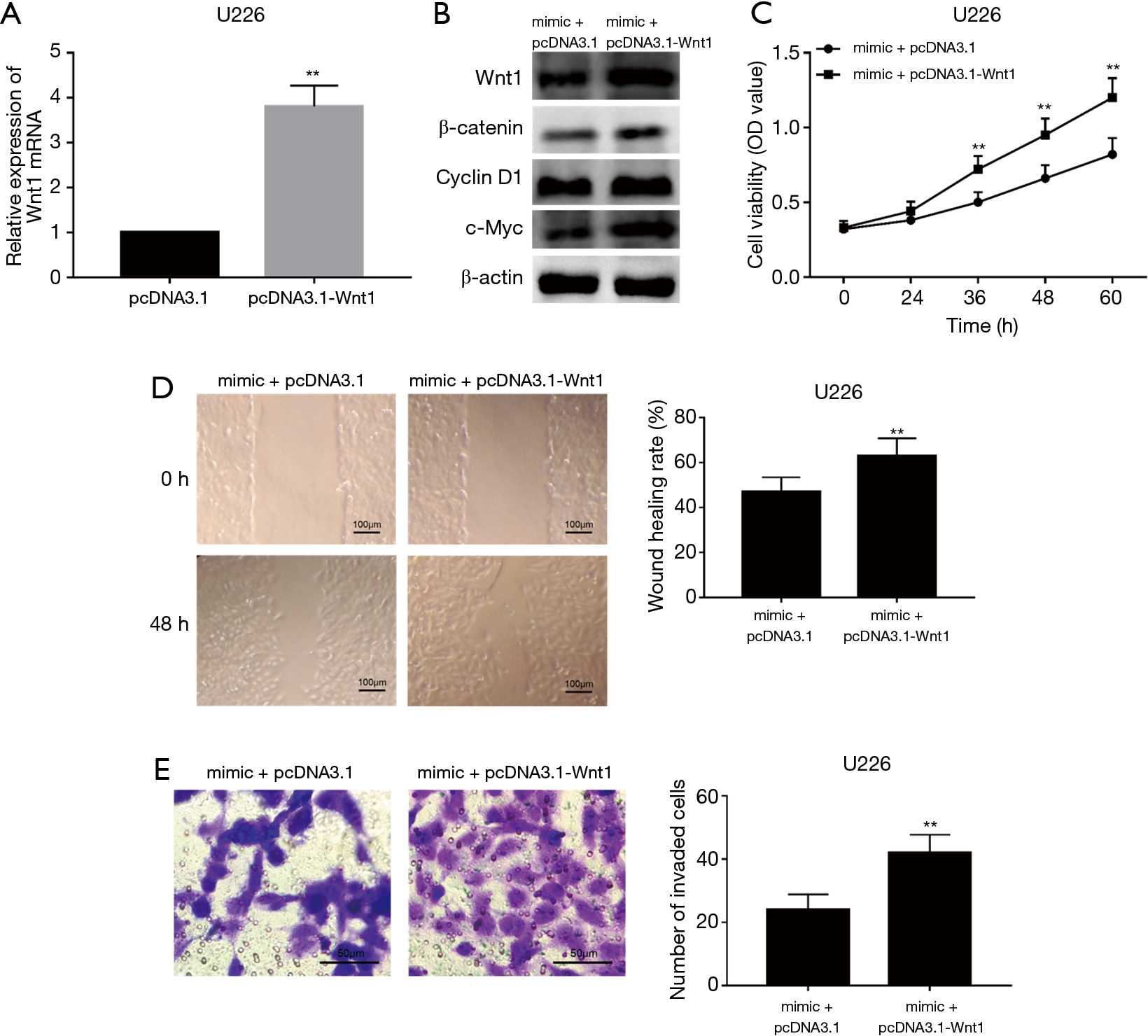 Figure 6 Wnt1 overexpression partially reversed the suppressive effects of miR-19a-3p on cell proliferation, migration, and invasion in U266 cells. U266 cells were transfected with the pcDNA3.1 or pcDNA3.1-Wnt1 vector. (A) The mRNA levels of Wnt1 were measured to detect the transfection efficiency using RT-qPCR. (B) Western blot analysis was performed to determine Wnt1, β-catenin, cyclin D1, and c-Myc protein levels following Wnt1 overexpression. β-actin served as internal reference. (C) The CCK-8 assay was used to assess cell viability. (D) Cell migration ability was evaluated by wound healing experiments (magnification, 100×). (E) Cell invasion ability was assessed using the transwell invasion assay. The cells in the lower layer of the chamber were fixed with 4% paraformaldehyde for 20 minutes and stained with crystal violet solution for 15 minutes, and finally photographed under a microscope (magnification, 400×). **P<0.01. RT-qPCR, quantitative reverse transcription polymerase chain reaction; CCK-8, cell counting kit-8.

MM is one of the most common hematological malignancies, accounting for about 1% of all cancer cases (22). Currently, there is no drug or treatment that can completely cure MM. Resistance and relapse are the biggest obstacles hindering the development of successful MM treatments (8). Therefore, it is crucial to investigate the potential pathogenic mechanisms of the occurrence and development of MM, especially in terms of proliferation and apoptosis in order to develop new treatment strategies (1). In recent years, the use of non-coding RNAs (including miRNAs, long non-coding RNAs, circular RNAs, and siRNA) has become increasingly popular for studying the mechanisms and treatments of MM (23,24). This present study demonstrated that miR-19a-3p was significantly down-regulated in MM patients and cell lines. This result was consistent with the changes in miR-19a-3p reported in other cancers (15,25).

The Wnt/β-catenin pathway plays an important role in embryogenesis, cell growth, and proliferation (27). Over-activation of the Wnt signaling pathway is inextricably linked to cancer initiation and progression (28). Wnt binds to the receptor and initiates a signal cascade to activate β-catenin which promotes the expression of oncogenes such as cyclin D1 and c-Myc (29). In this study, miR-19a-3p significantly inhibited the expression of Wnt1, β-catenin, cyclin D1, and c-Myc. When Wnt1 was knocked down, the expression of β-catenin, cyclin D1, and c-Myc was also suppressed. These data suggested that Wnt1 played a vital role in the miR-19a-3p-mediated regulation of cell proliferation, migration, and invasion.

In summary, miR-19a-3p was down-regulated in MM tissues and cell lines and was negatively correlated with Wnt1 expression. Moreover, miR-19a-3p overexpression in U226 and RPMI-8226 cells inhibited cell growth, invasion, and migration by targeting Wnt1. The data in this report indicated that miR-19a-3p may be a potential target for the treatment of MM.

Reporting Checklist: The authors have completed the MDAR reporting checklist. Available at http://dx.doi.org/10.21037/tcr-20-3490

Conflicts of Interest: All authors have completed the ICMJE uniform disclosure form (available at http://dx.doi.org/10.21037/tcr-20-3490). The authors have no conflicts of interest to declare.

Ethical Statement: The authors are accountable for all aspects of the work in ensuring that questions related to the accuracy or integrity of any part of the work are appropriately investigated and resolved. This study was approved by the Research Ethics Committee of the Affiliated Hospital of Southwest Medical University, and all patients provided signed informed consent. The study was conducted in accordance with the Declaration of Helsinki (as revised in 2013).