Breast cancer (BC) is an extremely heterogeneous systemic disease and the second leading cause of death worldwide (1). There are over 20 pathological types of invasive BC, which exhibit different prognostic outcomes. At present, the expression levels of estrogen receptor (ER), progesterone receptor (PR), human epidermal growth factor receptor 2 (HER2) and Ki67 have been adopted as important reference to select clinical treatments (2), but the individualized treatment for BC cannot be reached so far. Therefore, it is still a hot topic in BC research to identify more predictive prognostic markers.

Ankyrin repeat and death domain containing 1A (ANKDD1A), is located at 15q22.31, and contains nine ankyrin repeats and one death domain. Meanwhile, it is down-regulated in glioblastoma multiforme (GBM), and acts as a tumor suppressor in GBM, especially under hypoxic condition (3). Importantly, the ankyrin repeat, one of the most common protein-protein interaction (PPI) motifs, has been reported to be involved in numerous functions, such as transcriptional activator, transporters, inflammatory responses, and signal transducers (4). Nonetheless, the role of ANKDD1A in BC remains unclear for the time being.

In this study, we discussed ANKDD1A expression in BC, including the correlation of ANKDD1A with various clinical phenotypes (like clinical stage and molecular subtypes). According to the functional enrichment analysis of ANKDD1A-related genes, ANKDD1A mostly participated in immune response. Moreover, ANKDD1A was shown to be strongly related to TBX21 and STAT4, the makers of Th1 cells. Most importantly, patients with higher ANKDD1A expression had superior clinical outcomes.

In this study, the clinical information of BC and ANKDD1A expression profile were obtained from The Cancer Genome Atlas (TCGA) database (https://portal.gdc.cancer.gov/) (5). The dataset of TCGA-BC contained 113 Para-cancerous breast tissues and 1,109 BC tissues. Specifically, clinical information was collected from BC individuals, including clinical stage, T stage, ER status, molecular subtypes and pathological types, while ANKDD1A expression was extracted from the RNA-sequencing data. Overall survival (OS) was calculated as the duration from the date of diagnosis to the date of death or last follow-up. In addition, the immune scores of cancer samples were obtained from the ESTIMATE (https://bioinformatics.mdanderson.org/estimate/), the professional approach to estimate the immune and stromal scores of tumor samples (6). The study was conducted in accordance with the Declaration of Helsinki (as revised in 2013).

ANKDD1A expression in para-cancerous breast tissues and BC tissues was analyzed, which was also estimated among BC individuals with different clinical stages, T stages, ER statuses, molecular subtypes, and pathological types.

To explore the molecular function (MF) of ANKDD1A, the ANKDD1A co-expressed genes that had the absolute value of Spearman’s correlation coefficient of >0.4 were selected. Thereafter, functional enrichment analysis was carried out by the Cluster Profiler package provided by Yu et al. (7).

Individuals were divided into high or low immune-score group according to the median immune score of samples. Later, ANKDD1A expression in these two groups was analyzed. The correlations of ANKDD1A with immunocytes (including B cells, CD8+ T cells, CD4+ T cells, macrophages, neutrophils, and dendritic cells) were evaluated by TIMER (https://cistrome.shinyapps.io/timer) (8). In addition, the relationships of ANKDD1A with various immunocyte markers were estimated by TIMER.

The Kaplan-Meier plot analysis was adopted in estimating the OS for BC individuals using log-rank test.

The SPSS23.0 software was utilized in all statistical analyses, and Fisher exact test was adopted to analyze the categorical data. A two-sided P value of 0.05 indicated statistically significant difference.

Down-regulation of ANKDD1A in BC

Firstly, ANKDD1A expression was compared between BC tissues and para-cancerous breast tissues. As shown in Figure 1A, ANKDD1A was significantly down-regulated in cancer tissues. Later, ANKDD1A expression was evaluated at different clinical stage, which suggested that ANKDD1A showed a downtrend as the tumor clinical stage progressed (Figure 1B). Also, ANKDD1A was down-regulated as T stage of BC progressed (Figure 1C).

Figure 1 ANKDD1A expression in BC. (A) ANKDD1A is down-regulated in breast cancer tissues compared to Para-cancerous tissues. (B) ANKDD1A has a downtrend while the clinical staging of tumor progressed. (C) ANKDD1A has a decrease with T stages in the progression of breast cancer. ANKDD1A, ankyrin repeat and death domain containing 1A.

Relationship of ANKDD1A to the molecular subtype of BC

Firstly, ANKDD1A expression in different histological subtypes was evaluated, which revealed that ANKDD1A was up-regulated in infiltrating lobular carcinoma compared with that in infiltrating ductal carcinoma (Figure 2A). As a supplement to pathological type, ANKDD1A expression in different molecular types was analyzed based on the gene expression profiles and molecular biological characteristics of individuals. According to our results, ANKDD1A showed the highest level in normal type, followed by basal type, luminal A, and luminal B, while the lowest level was detected in HER2-enriched type of BC (Figure 2B). Additionally, it was discovered that, ANKDD1A was up-regulated in ER negative group compared with that in ER positive group (Figure 2C). 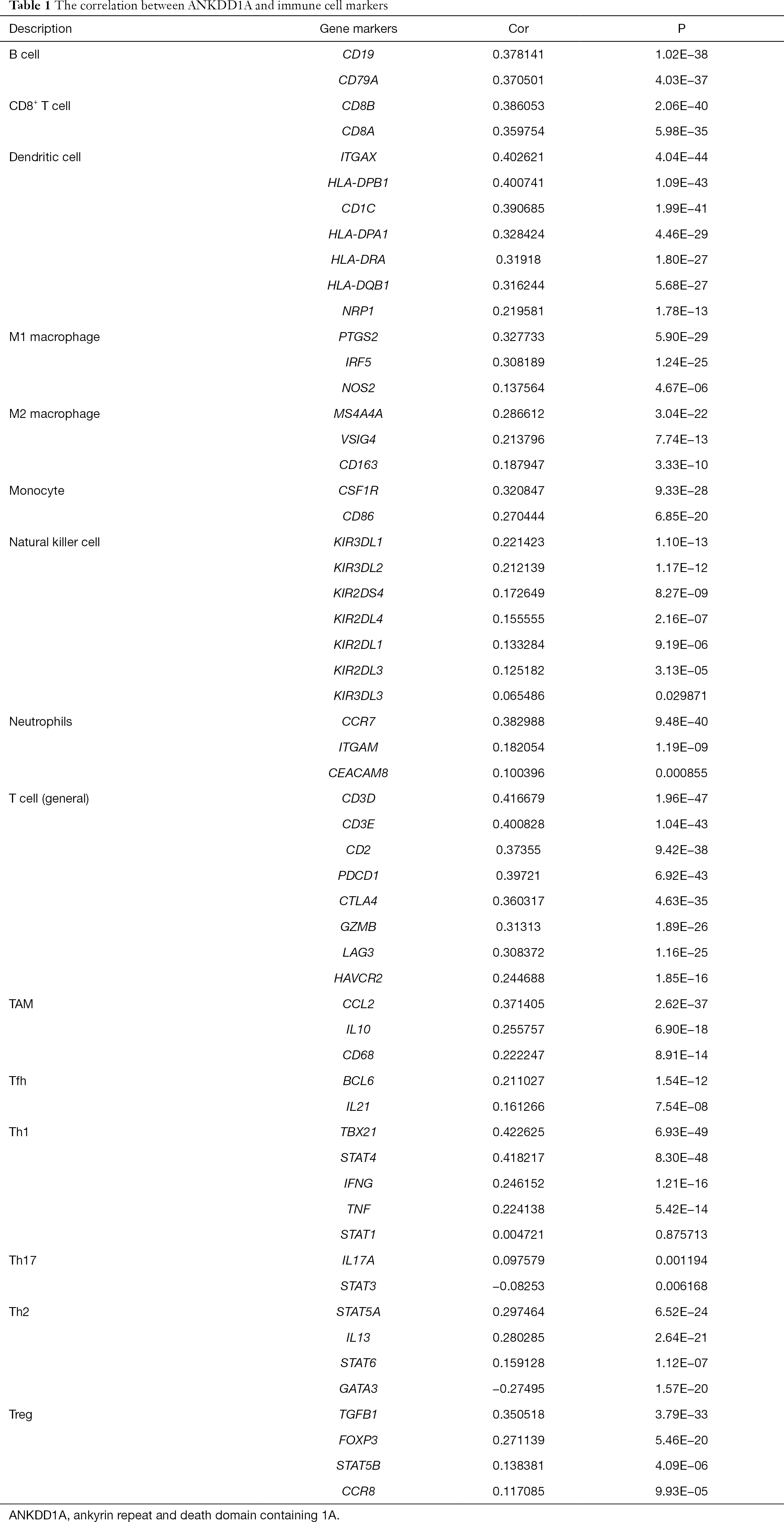 ANKDD1A was a marker that predicted superior prognosis for BC

ANKDD1A might be involved in immune response, and it was a critical factor for the clinical outcome of BC. Thus, we evaluated the prognostic value of ANKDD1A in BC. It was observed in Figure 5 that, patients with higher ANKDD1A expression achieved a longer survival. 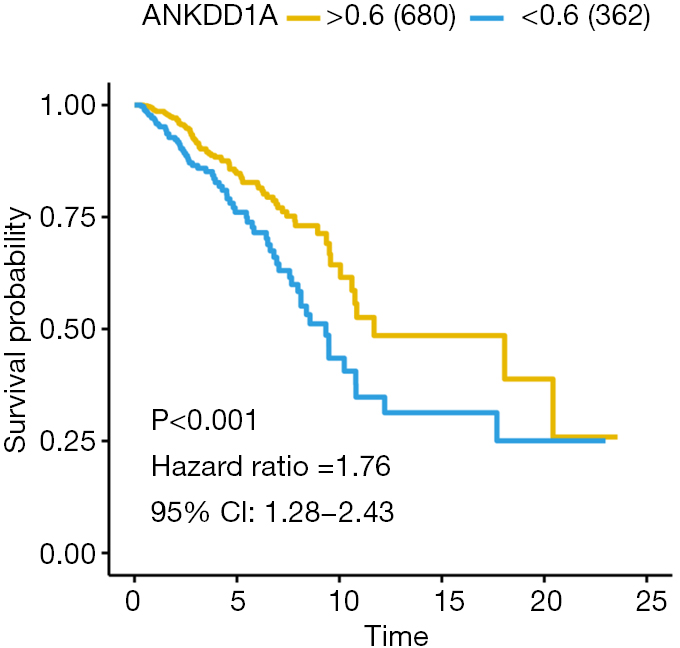 Methylation status of ANKDD1A in BC

As suggested in previous study, ANKDD1A is hypermethylated in GBM. As a result, we explored the ANKDD1A methylation status in BC using the online tools. According to Figure 6, ANKDD1A expression was correlated with different CpG islands, including cg18612204, cg10097464, cg00958451, cg21153004, cg12119988, and cg09291474. SH3BP2/HIF1AN interacts with ANKDD1A gene, and the correlation between ANKDD1A and SH3BP2/HIF1AN is 0.296 and 0.102, respectively (Table 2). As showed in Figure 6, ANKDD1A is regulated by methylation, so the expression of ANKDD1A in BC is inhibited. And, SH3BP2/HIF1AN interacts with ANKDD1A gene to inhibit tumor immune microenvironment, thus promoting tumor growth.

Table 2 The correlation between ANKDD1A and regulatory genes
Full table

Findings in this study suggested that, ANKDD1A decreased in BC tissues compared with para-carcinoma tissues. Besides, high ANKDD1A expression was detected in early-stage BC, ER negative group, infiltrating lobular carcinoma, and normal subtype of BC molecular subtypes. Noticeably, ANKDD1A expression was correlated with several CpG islands, such as cg18612204, cg10097464, cg00958451, cg21153004, cg12119988 and cg09291474.

DNA methylation is a common and important form of epigenetics, which plays an important role in the occurrence and development of malignant tumors. Methylation regulation is quite common in BC, which involves a wide range of genes, including cell cycle regulatory genes, DNA repair genes, signal transduction genes, and cell adhesion genes. Typically, the abnormal DNA methylation may serve as a potential biomarker in the early diagnosis of BC. In this study, we found that ANKDD1A expression was related to its CpG islands, indicating that the methylation status of ANKDD1A might substantially contribute to BC. However, the precise mechanism in the regulation of ANKDD1A methylation remains unknown so far, which deserves further investigation.

Mina Bissel first proposed that, the biological behavior of malignant tumors depended not only on tumor cells, but also on the tumor microenvironment (9), and it also exerted a decisive role in tumor evolution and prognosis, as proved by numerous studies (10-12). The microenvironment of BC cells consists of cancer cells, fibroblasts, endothelial cells, immune cells, adipocytes and other stromal cells, as well as the extracellular matrix components, which jointly promote the occurrence and development of BC (13).

T lymphocytes are the major immune infiltrating cells in BC, which account for approximately 75%, while B lymphocytes take up less than 20%, and monocytes occupy 10% (14). T lymphocytes can be divided into CD4 T cells, CD8 T cells and Treg cells (15). According to the secreted cytokines, CD4+ T cells are classified as Th1 and Th2 cells. Of them, Th1 cells enhance cellular immunity through secreting IFN-γ and IL-2 (16), while Th2 cells inhibit cellular immunity and promote humoral immunity by secreting IL-4, IL-5 and IL-10 (17,18).

The potent correlation between ANKDD1A and T cells suggests that, ANKDD1A contributes to the regulation of T cells, especially for Th1 cells. Also, studies reveal that the increased proportion of Th1 cells and decreased proportion of Th2 cells indicate favorable prognosis for BC; in addition, the ratio of Th1/Th2 in BC tissues has become one of the optimal immune prognostic factors (19). Further, survival analysis of ANKDD1A showed that, individuals with high ANKDD1A expression had promising clinical outcomes compared with those with low ANKDD1A expression. Such result was consistent with the finding that, BC patients with a higher Th1 cell proportion had better prognosis. In future, we will perform experimental studies to explore the function of ANKDD1A in BC, so as to verify our results.

ANKDD1A may serve as a critical gene in the pathogenesis of BC and the immune microenvironment of BC tissues.

Reporting Checklist: The authors have completed the MDAR reporting checklist. Available at http://dx.doi.org/10.21037/tcr-20-2685

Conflicts of Interest: All authors have completed the ICMJE uniform disclosure form (available at http://dx.doi.org/10.21037/tcr-20-2685). The authors have no conflicts of interest to declare.