Most of the chemotherapeutic drugs will kill cancer cells and normal tissue cells simultaneously, causing a variety of toxic side effects such as digestive tract reaction, central nervous system reaction, cardiovascular disease and myelosuppression (1-5). Among these toxic and side effects, hematopoietic damage triggered off by chemotherapeutic drugs is particularly serious. The hematopoietic tissue and cell will be damaged mostly then lead to the number of peripheral blood cells released from bone marrow decreasing, especially the leukocytes decline seriously in a short time. There are symptoms such as anemia, hemorrhage, infection, even life-threatening (6) because of the myelosuppression. Re-establishing hematopoiesis and immune system are the key to treating these diseases. At present, the treatments rely mainly on leukocytes drugs (7), platelet transfusion (8) and haemopoietic growth factors (9) therapy to improve the basic conditions of patients. But these methods have disadvantages for some patients such as transfusion reactions and transfusion-transmitted infections (10), expensive cost (11,12), and so on. Therefore, a safer, more effective and economical method should be found to promote medullary hematopoiesis function to support cancerous people complete the course of chemotherapy successfully and improve their quality of life.

As an emerging physical therapy, low-intensity pulsed ultrasound (LIPUS) has been approved as a safe non-invasive method for the treatment of bone healing, soft-tissue regeneration, inhibition of inflammation, non-invasive neuromodulation, and other applications (13). Our previous experimental study showed that LIPUS can promote the proliferation, differentiation and migration of bone marrow mesenchymal stem cells (14-16), and also found that LIPUS can treat leukopenia caused by cyclophosphamide chemotherapy and elevate leukocytes count after cytarabine chemotherapy (17,18).

But, the above results of our research only use single drugs to induce myelosuppression. In consideration of current clinical application, different cell cycle chemotherapy drugs are often used to treat cancer in combination, such as paclitaxel and carboplatin (19,20). We thought animal models should be conducted in strict simulation of clinical diagnosis and treatment to disease in order to be closer to the clinical status quo. So, in this research we triggered the hematopoietic damages of SD rats by paclitaxel plus carboplatin. This research was further explored whether LIPUS can reconstruct the hematopoietic function in myelosuppression induced by paclitaxel plus carboplatin combination chemotherapy. The mechanism of treating effects of LIPUS on hematopoietic damage will be tried to explain. The results might introduce a new method to treat hematopoietic damage caused by combined chemotherapy in clinics in the future. We present the following article in accordance with the ARRIVE reporting checklist (available at: http://dx.doi.org/10.21037/tcr-20-3035).

After drug administration for 4 days, the LIPUS group began treatment with LIPUS device (Chongqing Haifu Medical Technology Co., Ltd., China). The parameters of LIPUS were involved as follows: spatial-average temporal-average intensity (ISATA) 0.2 W/cm2, frequency 0.27 MHz, duty cycle 20% and pulse repetition frequency 1 KHz. The position of treating was the metaphyseal of the right hind limb femur. Before LIPUS treatment, the surface of the right hind limb skin was depilated, disinfected, and covered with the ultrasonic coupling agent. Then, LIPUS started to work. The control group was handled as the same as the LIPUS group except for no energy output from LIPUS device. The treatment time was 20 min/day, for 7 consecutive days.

The mental state of the rats, diarrhea, skin and hair color, exercise, weight changes and time of death were observed and recorded during the experiment.

To detect the counts of blood cell, the rats (n=6, per group and per time point) were chosen randomly on the days 0, 4, 7, 9, 11, 14 and 18. The 0.5 mL heart blood was extracted from the rats anesthetized and quickly injected into the disposable blood collection tube (including EDTA, Yulin medical equipment Co., Ltd., China). The blood in the blood collection tube was mixed upside down for anticoagulation, and was detected by automatic five-classification blood analyzer (XT-2000i, SYSMEX, Japan) within 2 h.

To investigate the change of bone marrow, the rats (n=6) were euthanized on the days 0, 4, and 11, the right hind limb hair was shaved and the skin was disinfected. Then the right femur was dissected and the bone marrow was fixed in 4% paraformaldehyde (Chongqing Boer Biotechnology Co., Ltd., Chongqing, China). After dehydration, decalcification, embedding, sectioning and staining, the morphology of hematopoietic tissue was surveyed under optical microscope (BX51, Olympus, Germany) with the same magnification and each tissue specimen was observed with the same 10 visual fields. Bone marrow tissue sections (10 images per sample) were quantitatively analyzed by Image J (IBM, Armonk, NY, USA) software, and the proportion of hematopoietic tissue in the above samples was calculated.

To observe the change of hemopoietic tissue, on the days 0, 4, and 11 the part of the femur was taken 1 cm long and then cut along a major axis. After being fixed in 2.5% glutaraldehyde fixative (Chongqing Boer Biotechnology Co, Ltd, Chongqing, China) at 4 °C over 4 h, the samples were handled by dehydration, drying, coating, at last detected under a scanning electron microscope (Hitachi, Tokyo, Japan) (21).

To detect the level of Human granulocyte-macrophage colony stimulating factor (GM-CSF) and interleukin 3 (IL-3), the femur was cut on days 0, 4, and 11, then the supernatant was isolated from the bone marrow in the femur by centrifugation at 1,000 r/min for 10 min. According to the instructions of the ELISA kit (Shanghai Westang BIO-TECH Co., Ltd., Shanghai, China), the GM-CSF and IL-3 in bone marrow supernatant were detected.

The counts of peripheral blood cells 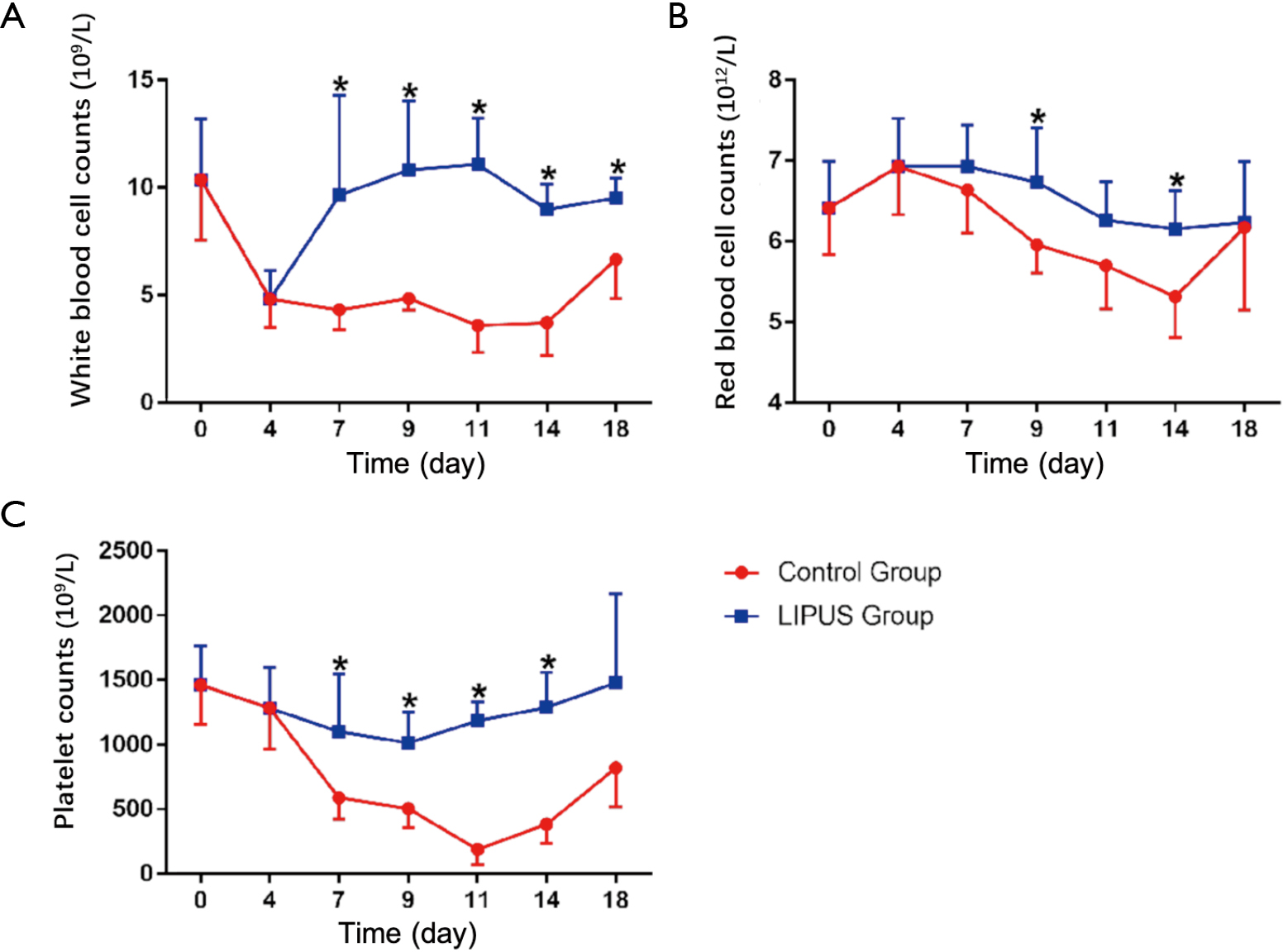 The expressions of SCF, ICAM-1 and ACVM-1 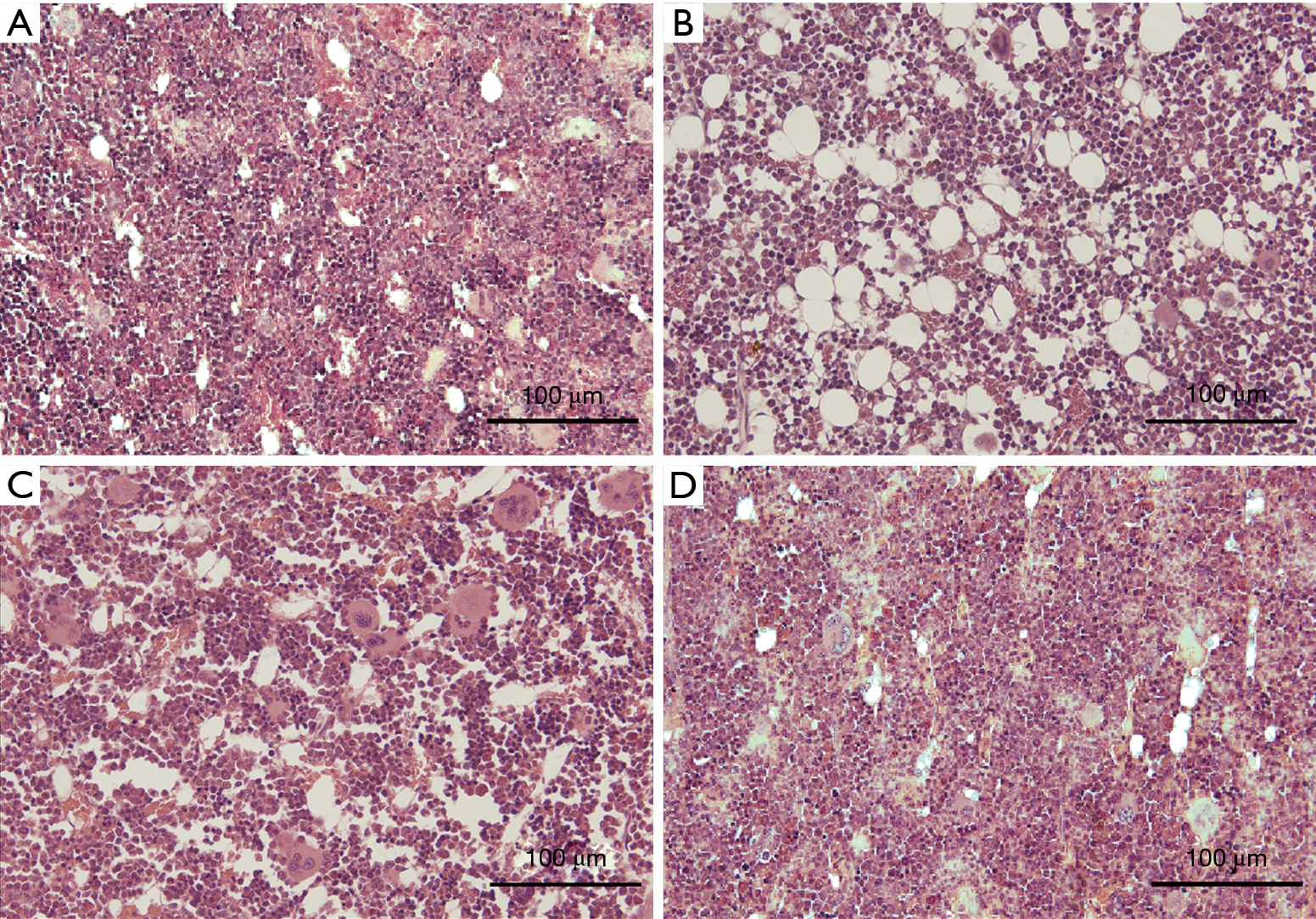 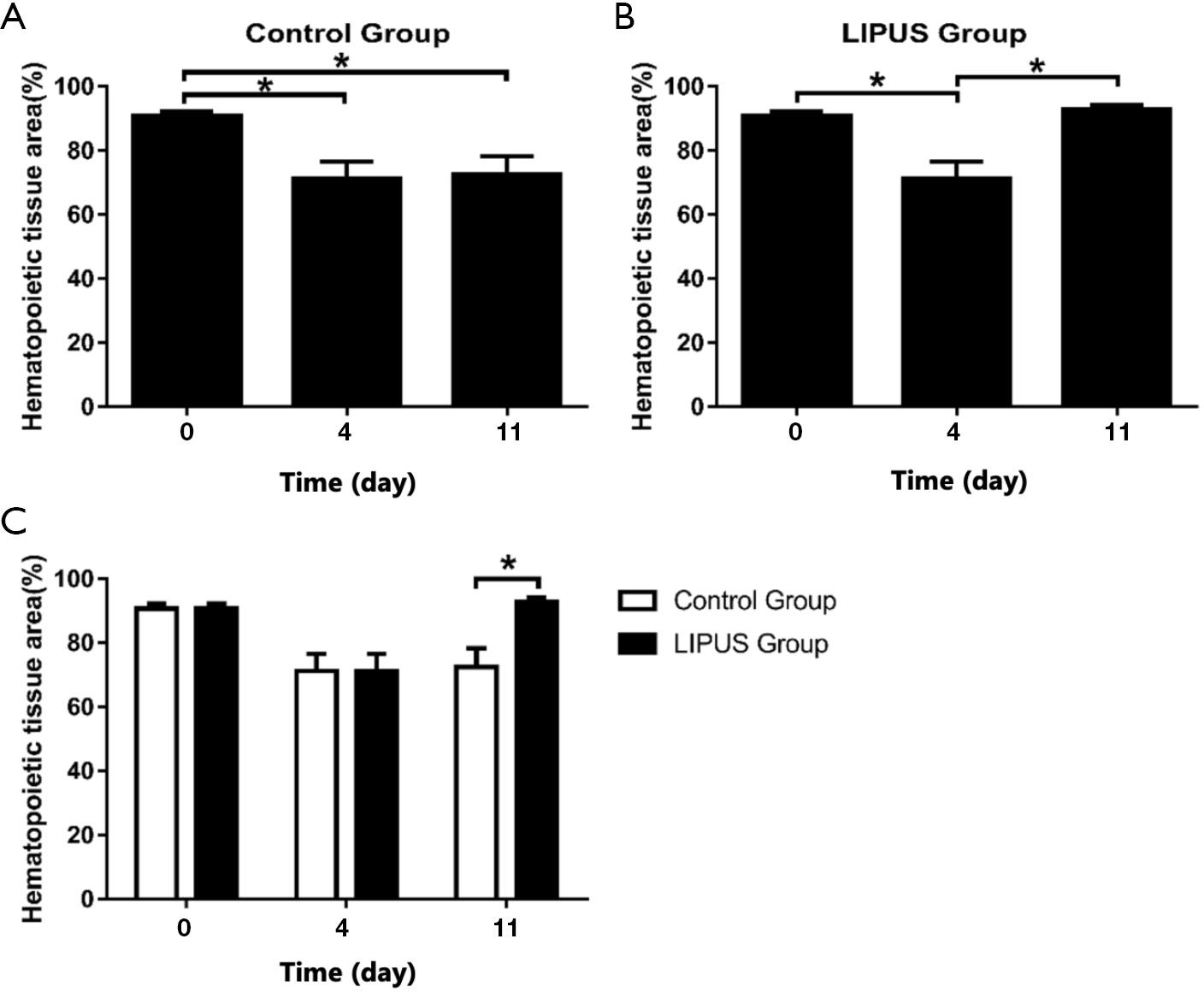 The results were analyzed by H&E staining and scanning electron microscopy. In normal rats, bone marrow tissue was gathered to form a colony (Figure 5A). However, after drug administration, the adherent cells are significantly reduced and less gathered (Figure 5B). On the 11th day, the cells began to re-form new small colonies, but the number of attached cells did not increase (Figure 5C). In contrast, on the 11th day, cells in the LIPUS group were abundant and large colonies were formed (Figure 5D). It showed that LIPUS promoted the adhesion of bone marrow cells and helped the bone marrow cells to form colonies. 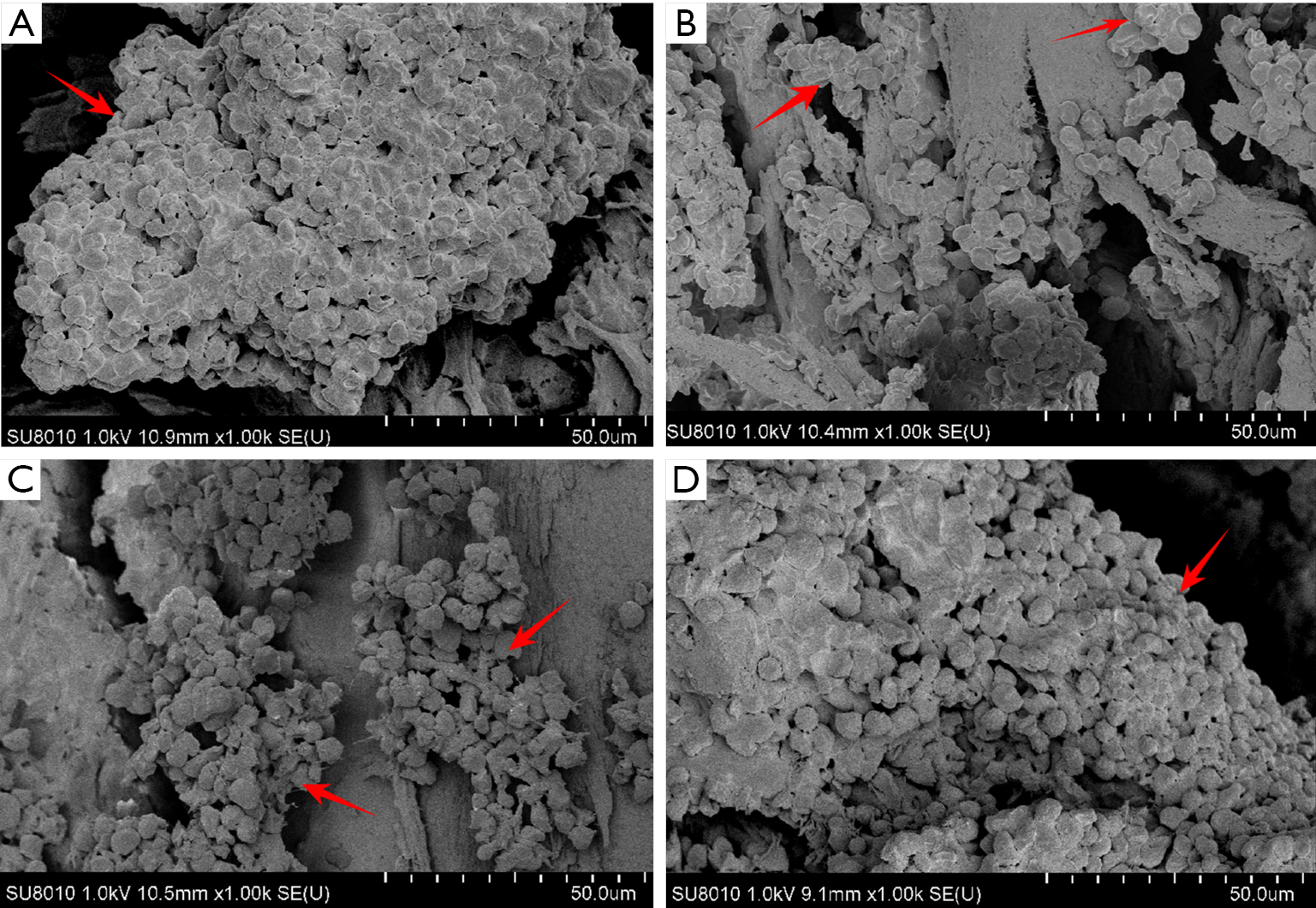 Levels of GM-CSF and IL-3 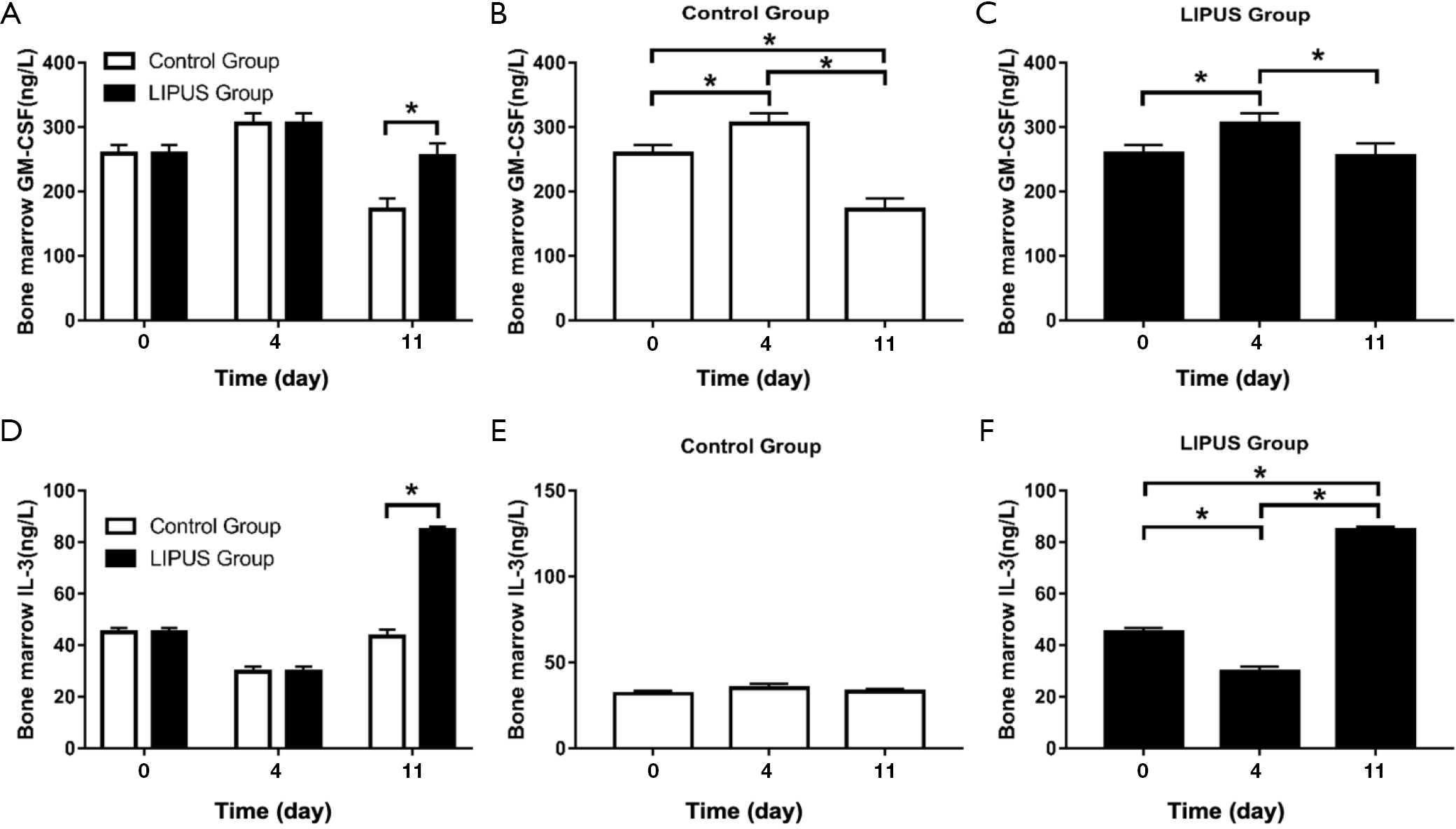 In recent years, chemotherapy is still the main treatment for malignant tumors in the middle and advanced stages. The chemotherapy is often applied with cell cycle-specific drugs combined with cell cycle non-specific drugs in clinic currently. The utilizing of combination chemotherapy drugs has been shown higher than the single drug because of the better therapeutic effects and fewer side effects. However, the current animal model of hematopoietic damage has been induced still mainly by single drugs, which are not inconsistent with the clinical treatment plan. The periodic specific drug paclitaxel plus the cell cycle non-specific drug carboplatin is widely used in clinical treatment, especially in the treatment of non-small cell lung cancer (22). So, the animal hematopoietic model was tried to and achieved to make by paclitaxel plus carboplatin in this research to be fitting in with the clinical requirements.

The paclitaxel plus carboplatin also causes bone marrow failure when killing tumor cells. The main damages of the two drugs are to make leukocytes and platelet counts be decreased, which will lead to the body’s immune decline, increased susceptibility, bleeding tendency and many other side effects, and may even be life-threatening. In this experiment, the leukocyte and platelets counts declined after paclitaxel and carboplatin administration for 4 days, which was in keeping with those side effects talked above. The results demonstrated that it is feasible to construct a bone marrow suppressive model with combined chemotherapy drugs.

Currently, with the rapid and comprehensive development of non-invasive method, LIPUS has been widely used in articular cartilage regeneration (23), soft tissue repair (24), anti-infection and infarction (25), nerve regeneration (26) and vascular thrombolysis (27), myelosuppression researched by our past studies (17,18,21), and so on. LIPUS is deserved as a new method with the advantages of effectiveness, safety and economy. So, in this investigation, the treatment effects of LIPUS on bone marrow failure rats induced by paclitaxel plus carboplatin were observed.

The results of this study showed that LIPUS had the effect on making the hematopoietic damaged recovered. Through blood analysis, LIPUS was proven to promote the increase of leukocytes and platelets after paclitaxel combined with carboplatin chemotherapy. These results were the same as those which had been reported by our team (17,18,21). But the effect on erythrocytes was not as obvious as on leukocytes and platelets. The decline of erythrocytes was slowed down merely by LIPUS. The reason maybe the normal erythrocytes lifespan is about 120 days, which is difficult to change in the short term.

It was reported that the SCF is the key to survival, proliferation and differentiation of early hematopoietic stem cells (28). The ICAM-1 and VCAM-1 are two adhesion molecules expressed by bone marrow stromal cells. The VCAM-1 was involved in the homing of early blood progenitor cells (29) and ICAM-1 could activate specific kinase through phosphorylation, leading to increased transcription factor activation and cytokine production, increased expression of cell membrane proteins, and reactive oxygen species (30). The SCF detection result indicated that LIPUS had no significant effect on the secretion of SCF. Zhao et al. (31) had found that SCF promotes hematopoiesis and angiogenesis is a slow process, and the need for SCF is elevated. For a period of time, it would take more time to increase the SCF than ICAM-1 and VCAM-1. Through the detection of ICAM-1 and VCAM-1, it was found that there was a significant increase in LIPUS group and control group in 11th days after drugs administration. VCAM-1 levels have been significantly improved. Our results suggested that LIPUS activated adhesion and proliferation of bone marrow cells and the like possibly by raising the level of VCAM-1 and ICAM-1, thereby improving the hematopoietic damage.

Both GM-CSF and IL-3 are hematopoietic regulators (33). GM-CSF mainly stimulates the cloning of granulocytes and macrophages (G/M) and enhances the function of mature cells (34). The main role of IL-3 is to stimulate G/M colonies (35). In the research, LIPUS promoted the secretion of GM-CSF and IL-3, thereby accelerating cell maturation and adhesion. Finally, the hematopoietic damage was also improved.

Of course, further research is needed to clearly understand the specific effects and mechanisms of LIPUS on the immune system.

In summary, long-term stable bone marrow failure can be induced by the cell cycle-specific drug paclitaxel plus cell cycle non-specific drug carboplatin combination chemotherapy, which was consistent with clinical manifestations of the two drugs. The hematopoietic damage can be improved by LIPUS, which mechanisms maybe through correcting blood cell decline, increasing hematopoietic tissue, enhancing the levels of ICAM-1 and VCAM-1, and promoting the secretion of GM-CSF and IL-3.

Reporting Checklist: The authors have completed the ARRIVE reporting checklist. Available at http://dx.doi.org/10.21037/tcr-20-3035

Conflicts of Interest: All authors have completed the ICMJE uniform disclosure form (available at http://dx.doi.org/10.21037/tcr-20-3035). The authors have no conflicts of interest to declare.

Ethical Statement: The authors are accountable for all aspects of the work in ensuring that questions related to the accuracy or integrity of any part of the work are appropriately investigated and resolved. Experiments were performed under a project license (SCXK 2018-0003) granted by ethics board of Chongqing Medical University, in compliance with all national and institutional guidelines for the care and use of animals.