MicroRNAs (miRNAs) are small, non-coding RNAs with an approximate length of 22 nucleotides. They are found in many organisms and play an important role in the regulation of gene expression at the post-transcriptional level (1,2) via degradation of RNA targets or inhibition of messenger RNA (mRNA) translation (3). Increasing evidence has shown that miRNAs are aberrantly expressed in multiple cancers and more than 50% of miRNA genes are located in cancer-associated genomic regions (4-6), suggesting a crucial role of miRNAs as oncogenes or tumor suppressors in the pathogenesis of cancers.

A single miRNA could act as a regulator of hundreds of genes, and a transcript could be regulated by numerous different miRNAs. With the development of high-throughput profiling and comprehensive bioinformatics analysis, it is possible to identify multiple miRNA-associated genes using next-generation sequencing. This may help in investigating miRNA-targeted genes or cellular pathways involved in cancer. Ye et al. performed next-generation sequencing to explore the alterations in the whole transcriptome induced by overexpression of miR-145. Their study identified 49 mRNAs targeted by miR-145 in breast cancer cells (9). Considering that miR-133a can function as a tumor suppressor in breast cancer (10), this study set out to explore the multiple miR-133a-1 associated target genes and their pathways using next-generation sequencing followed by an integrated bioinformatics analysis. We present the following article in accordance with the MDAR checklist (available at: http://dx.doi.org/10.21037/tcr-20-2681).

The gene expression profiles of 916 patients with breast cancer were downloaded from the Kmplotter database (www.kmplot.com). Data analyses were conducted in strict accordance with The Cancer Genome Atlas (TCGA) publication guidelines (http://cancergenome.nih.gov/publications/publicationguidelines). Kaplan-Meier analysis was performed to assess the differences in survival between patients with high and low levels of miR-133a-1 expression using the “survival” package in R (version 3.24). Statistical significance was compared using the log-rank test. A P value of <0.05 was considered to represent statistical significance. The study was conducted in accordance with the Declaration of Helsinki (as revised in 2013). 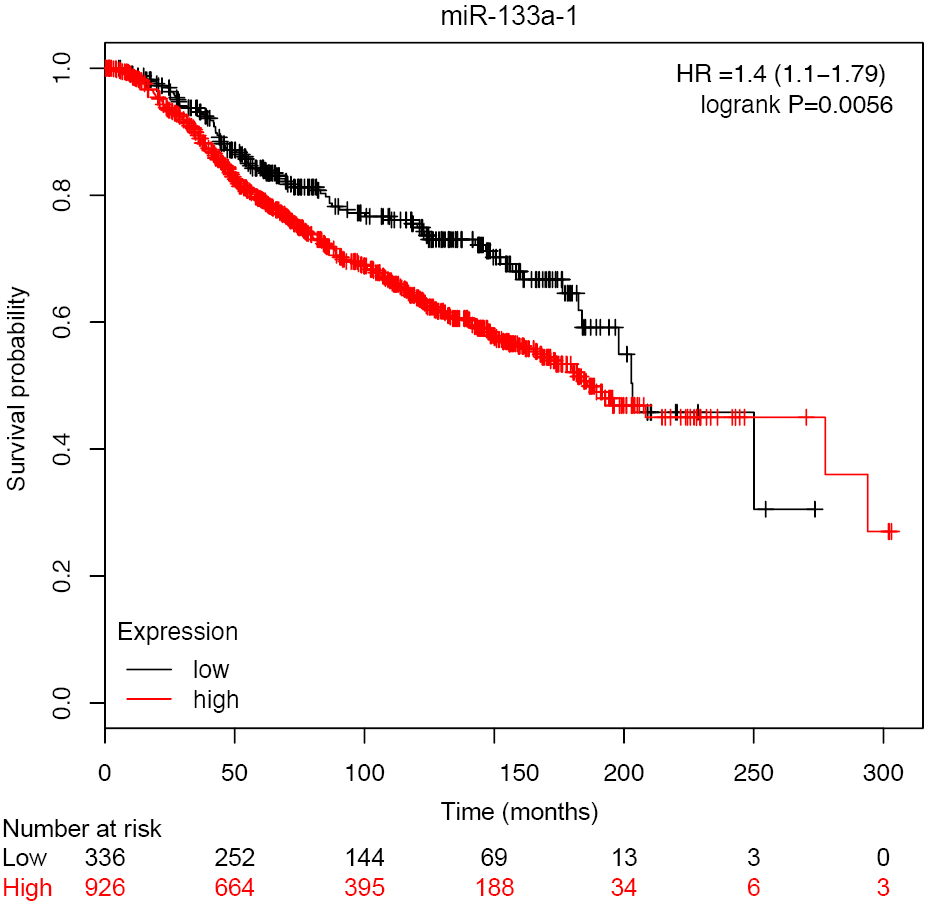 A sequencing library was constructed for further RNA-seq analysis. A principal component analysis was conducted to assess the similarity or dissimilarity of gene expression patterns between cells overexpressing miR-133a-1 and cells transfected with the miR-NC. Cells overexpressing miR-133a-1 and cells transfected with miR-NC were grouped into distinct clusters, and the first two principal components explained more than 80% of the variability between the samples (Figure 2). This finding indicated the presence of differential gene expression patterns between the two samples, and confirmed the excellent performance of the RNA-seq.

The differential expression of genes 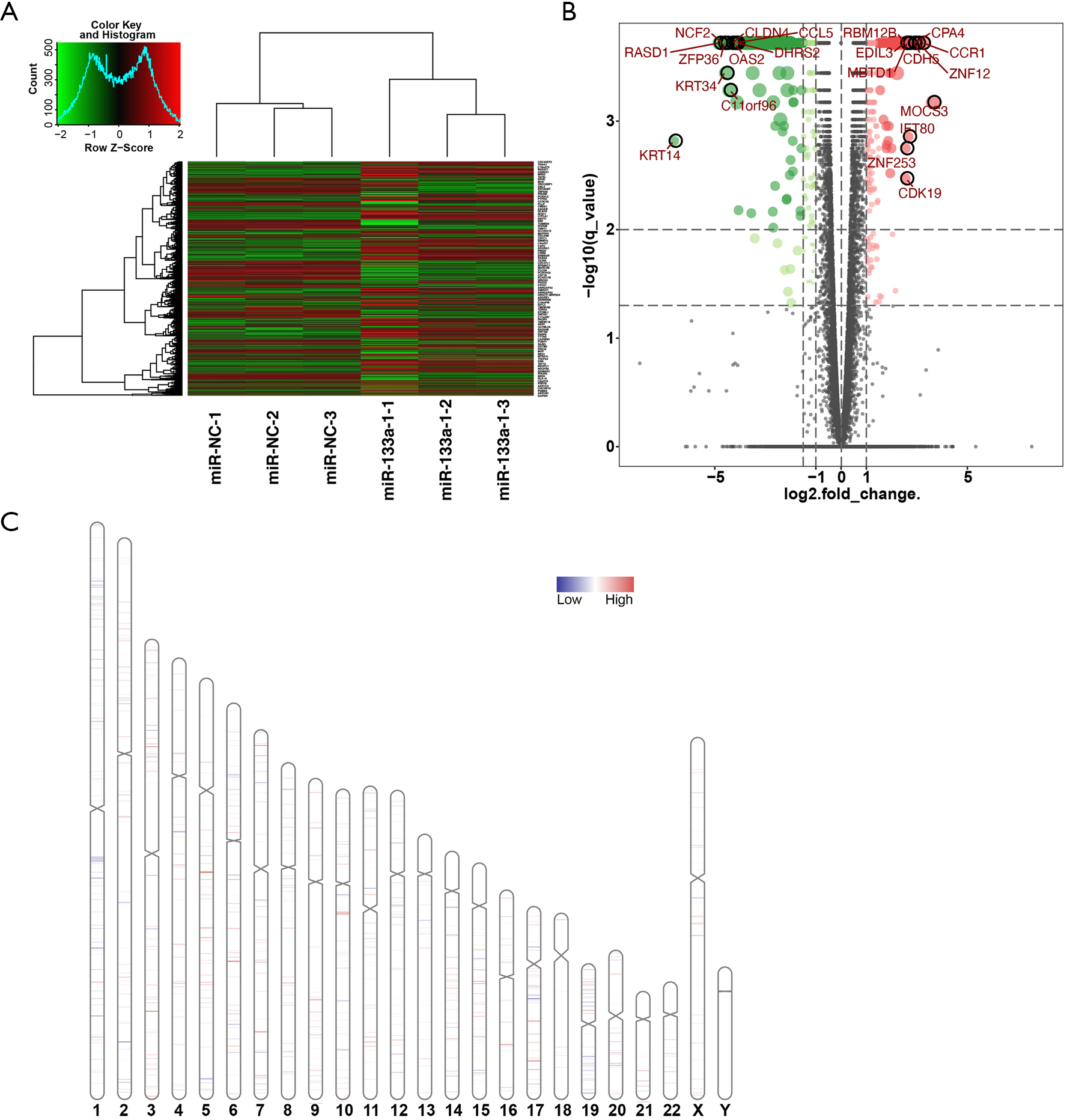 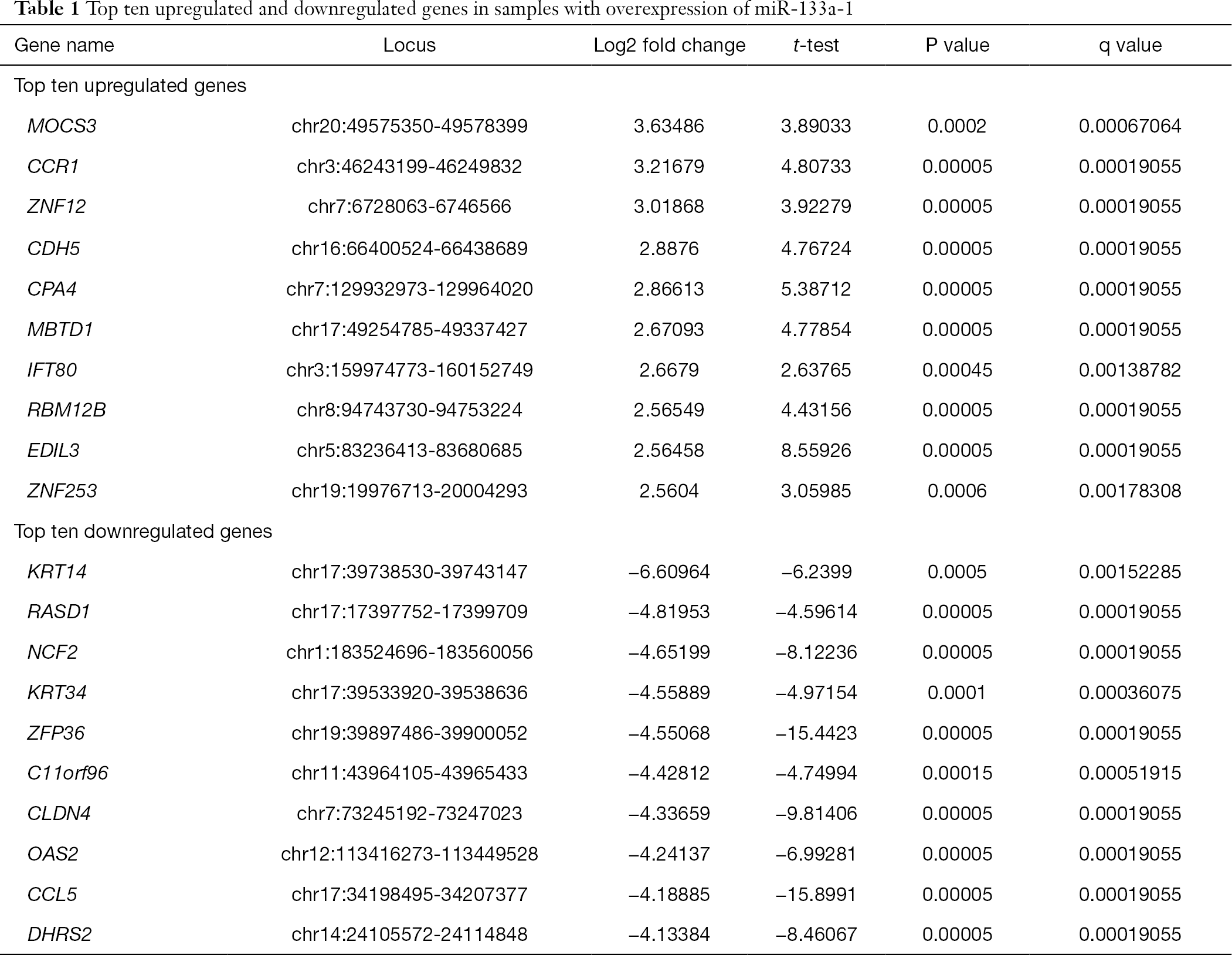 To investigate the enrichment status of the genes with differential expression caused by miR-133a-1 overexpression, the chromosomal locations of the 1,216 genes were examined. The results revealed that the differentially expressed genes were located throughout the genome, with no enrichment preference for any genomic region observed (Figure 3C).

To investigate the pathways related to the differential expression of the 653 upregulated and 563 downregulated genes, GO enrichment analysis was performed using the Clusterprofiler package. An adjusted P value of <0.05 was considered to be statistically significant. The top 10 pathways in which the differentially expressed genes were significantly enriched included negative regulation of protein phosphorylation, regulation of the intrinsic and extrinsic apoptotic signaling pathways, embryonic organ development, gland morphogenesis, ossification, response to viruses, and positive regulation of chromosome organization (Figure 4A).

Cluster similarity analyses were conducted on the basis of the GO results. Four GO-based pathway clusters containing more than 1 pathway were generated and are presented in the clustering dendrogram in Figure 4B. The observation that miR-133a-1 regulated genetic events across subgroups and multiple pathways further supported the hypothesis that it plays an important role in breast cancer.

TargetScan was used to predict the potential target genes of miR-133a-1. The selected genes were combined with the differentially expressed genes from our sequencing data, and the intersection was used for the analysis of semantic similarity using GOSemSim. Twelve genes were selected; their semantic similarities were ranked and are presented in the box plot shown in Figure 5A. Sex determining region Y-box 9 (SOX9) showed the highest semantic similarity among these genes, followed by neural precursor cell expressed, developmentally down-regulated 9 (NEDD9), and msh homeobox 2 (MSX2). These results suggested the potential role of SOX9 in the miR-133a-1-associated gene network. In addition, from the GO database (http://www.geneontology.org), we found that SOX9 was enriched in embryonic organ development pathway and ossification pathway, which indicating the potential regulation of the two pathways by miR-133a-1. 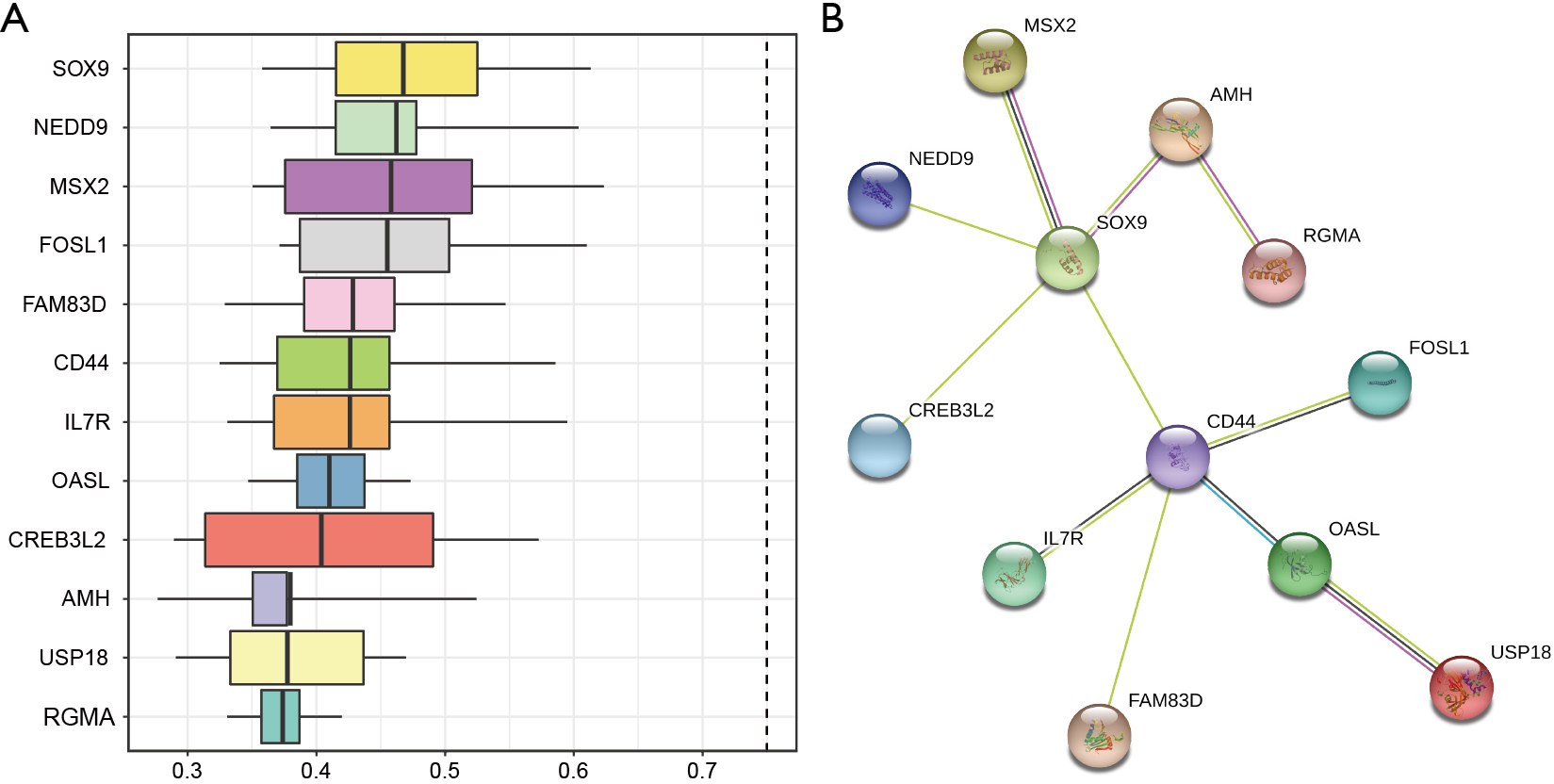 Figure 5 In silico analysis revealed that SOX9 is a crucial target of miR-133a-1. (A) The box plot shows the semantic similarity of potential targeted genes of miR-133a-1. (B) The protein-protein interaction network analysis of the differentially expressed genes obtained from the STRING database.

To further validate the potential target genes of miR-133a, the PPI network was analyzed. The 12 genes obtained from the semantic similarity analysis were uploaded to the STRING website. The network of potential target genes of miR-133a-1 was constructed with 12 nodes and 11 edges (Figure 5B). SOX9 and CD44 were hub nodes in the network, which further supported the hypothesis that the SOX9 gene might be a target of miR-133a. Among the genes presented in Figure 5B, MSX2 demonstrated the closest relationship with SOX9, suggesting a potential role of MSX2 in the miR-133a-1-SOX9 axis. 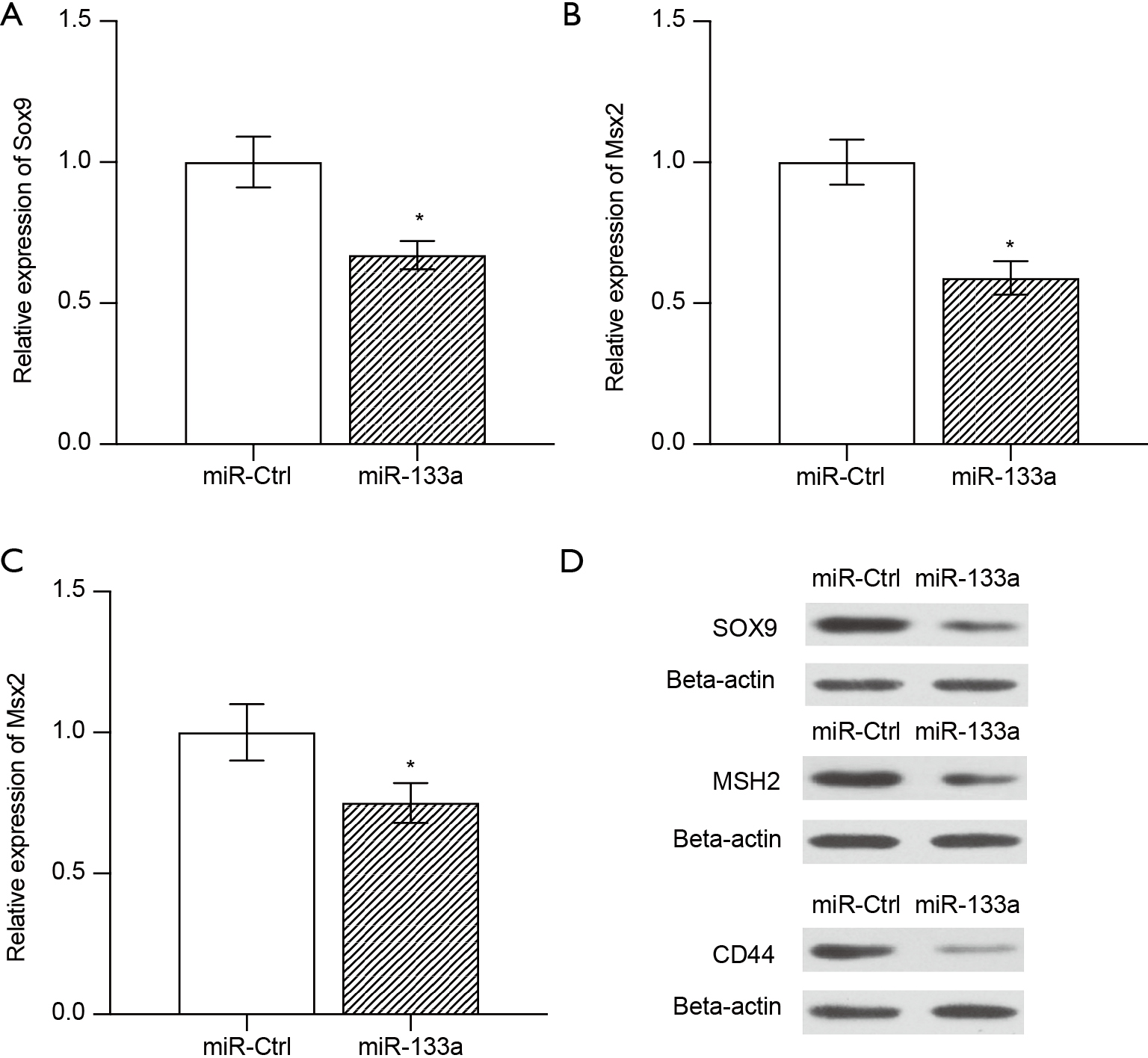 In this study, we demonstrated that low levels of miR-133a-1 expression were associated with longer median survival in patients with breast cancer, thus supporting the potential role of miR-133a-1 as a prognostic biomarker. Integrated bioinformatics analysis identified multiple potential target genes of miR-133a-1 and associated pathways in breast cancer cells. Semantic similarity analysis demonstrated that SOX9 showed the highest semantic similarity among the differentially expressed genes. PPI analysis confirmed the key role of SOX9 in the miR-133a-1-associated PPI network.

Several miR-133a-1-upregulated and downregulated genes identified in this study have been reported to play important roles in breast cancer cells. It has been demonstrated that the expression of the CCR1 is higher in breast invasive ductal carcinoma tissue than in adjacent normal tissues, and silencing of CCR1 can weaken the invasive and metastatic capabilities of breast cancer cells (11). CDH5 has been shown to stimulate the progression of breast cancer via the TGF-β signaling pathway (12). Experiments in MCF-7 cells have shown high levels of CPA4 secretion, indicating a role of CPA4 in the progression of breast cancer (13). Upregulation of RASD1 has also been shown to result in apoptosis of MCF-7 breast cancer cells (14). All of the above reports concur with and support the findings of the current study. Moreover, we also identified several novel potential targets of miR-133a-1, including MOCS3, ZNF12, MBTD1, IFT80, KRT14, NCF2, and KRT34. Further investigations are warranted to elucidate the underlying mechanisms of miR-133a-1 and its targets in breast cancers.

GO enrichment analysis generated several pathways in which the differentially expressed genes were abundantly enriched. These pathways included the negative regulation of protein phosphorylation, the apoptotic signaling pathway, and the development of embryonic organs. The association of miR-133a-1 with these pathways have been reported in other diseases and were consistent with our results. Upregulation of miR-133a reduced phosphorylation of ERK1/2 in cardiac hypertrophy (15) and miR-133 acted as an anti-apoptotic regulator in cardiomyocytes (16). A microarray study revealed that expression of miR-133 was increased during the development of mouse embryos (17). However, the relationships between these pathways and miR-133a-1 have not been explored in breast cancers previously. Here, we reported that genes in these pathways were regulated by miR-133a-1 overexpression in breast cancer cells, and the mechanisms involved warrant further investigation.

Previous studies have reported that miR-133b regulates the pathogenesis and metastasis of breast cancer by targeting SOX9 (18). MiR-133a, an isoform of miR-133 that has only 1 base difference from miR-133b at the 3'-end (19), was reported to suppress breast tumor growth (10). However, the correlation of miR-133a-1 with SOX9 has not been investigated. Here, we observed that SOX9 had the highest semantic similarities among all the miR-133a-1-induced differentially expressed genes, and SOX9 was the hub node in the PPI network. These observations provided a basic understanding of the function of miR-133a-1 in breast cancer via targeting of SOX9.

SOX9 is a transcription factor which regulates several developmental and tumor pathways. Previous studies have described the involvement of SOX9 in tumor initiation, proliferation, migration, and metastasis (20). SOX9 was found to contribute to all the miR-133b-mediated effects including cell proliferation, colony formation, and invasion ability in vitro, while re-expression of SOX9 could reverse miR-133b-mediated metastasis suppression in vivo (18). Therefore, we speculated that SOX9 might also function downstream of miR-133a by regulating cell proliferation, colony formation, invasion, and metastasis in breast cancer cells. Targeting SOX9 may be a potential therapeutic strategy for the treatment of breast cancers. However, further experiments are required to validate the function of miR-133a and SOX9 in breast cancers.

In conclusion, we performed an integrated bioinformatics analysis to investigate the role of miR-133a-1 in breast cancer. We identified several differentially expressed genes in breast cancer that are regulated by miR-133a-1, as well as their related pathways. This comprehensive investigation may contribute to a deeper understanding of cancer-related miRNAs and their targets, and provide a basis for further exploration of the mechanisms involved in the pathogenesis of breast cancer.

Conflicts of Interest: All authors have completed the ICMJE uniform disclosure form (available at http://dx.doi.org/10.21037/tcr-20-2681). The authors have no conflicts of interest to declare.