Breast cancer is the most common female malignancy worldwide. In approximately 5% of cases, the breast cancer has metastasized by the time of initial diagnosis. Despite most operable patients receiving surgery and adjuvant chemotherapy, the rate of recurrence or metastasis reaches 20–35% (1). Metastatic breast cancer (MBC) is an incurable disease, and the major goal of treatment is to relieve and control patients’ symptoms, improve their quality of life, and prolong their survival time (2).

Based on gene and immunohistochemistry analyses, breast cancers can be divided into different subtypes. Biological characteristics and clinical outcomes differ among patients with different subtypes, and the treatment strategies also vary. Expert consensus recommends endocrine therapy as the treatment of choice for hormone receptor (HR)-positive tumors. Trastuzumab is also used in combination with chemotherapy and then maintained on its own in HER2-positive patients. Triple-negative breast cancer (TNBC), which is defined as HER2-negative and HR-negative, accounts for nearly 12–17% of all breast cancers (3). TNBC progresses rapidly and is life threatening, and chemotherapy is recommended as treatment (4-6).

Capecitabine is widely used in the treatment of breast cancer. The FinXX study (13) and the CSCSG-010 study (14) showed that capecitabine-based adjuvant chemotherapy significantly prolonged the recurrence-free survival and OS of TNBC patients, while the GEICAM/ 2003-11 (15) study showed that patients with a non-basal-like phenotype could benefit from the addition of extended capecitabine treatment in early TNBC. In mTNBC, capecitabine maintenance therapy has been reported to demonstrate high activity and manageable safety (16,17). Clinical biomarkers to predict the efficacy of capecitabine are extremely important in TNBC, although studies in this area are relatively limited.

This retrospective cohort study focused on the correlations between CK5/6 and EGFR expression, the prognosis of TNBC, and the efficacy of capecitabine maintenance in patients with different TNBC subtypes. We present the following article in accordance with the REMARK reporting checklist (available at http://dx.doi.org/10.21037/tcr-20-1760).

Between January 2012 and December 2016, 164 mTNBC patients received first-line combination chemotherapy in the Oncology Department of the First Affiliated Hospital of Wannan Medical College, Anhui, China. Table 1 shows the baseline characteristics of the patients. All patients were aged 18 years or above, and all had confirmed recurrent or metastatic TNBC. Of 115 patients who achieved disease control after first-line combination chemotherapy, 93 had received an anthracycline-containing regimen, and 85 had received a taxane-containing regimen as adjuvant/neoadjuvant therapy. All patients had a good Eastern Cooperative Oncology Group (ECOG) score and a life expectancy of ≥3 months, along with at least 1 measurable metastatic lesion detected by computed tomography or magnetic resonance imaging examination, and adequate organ function. 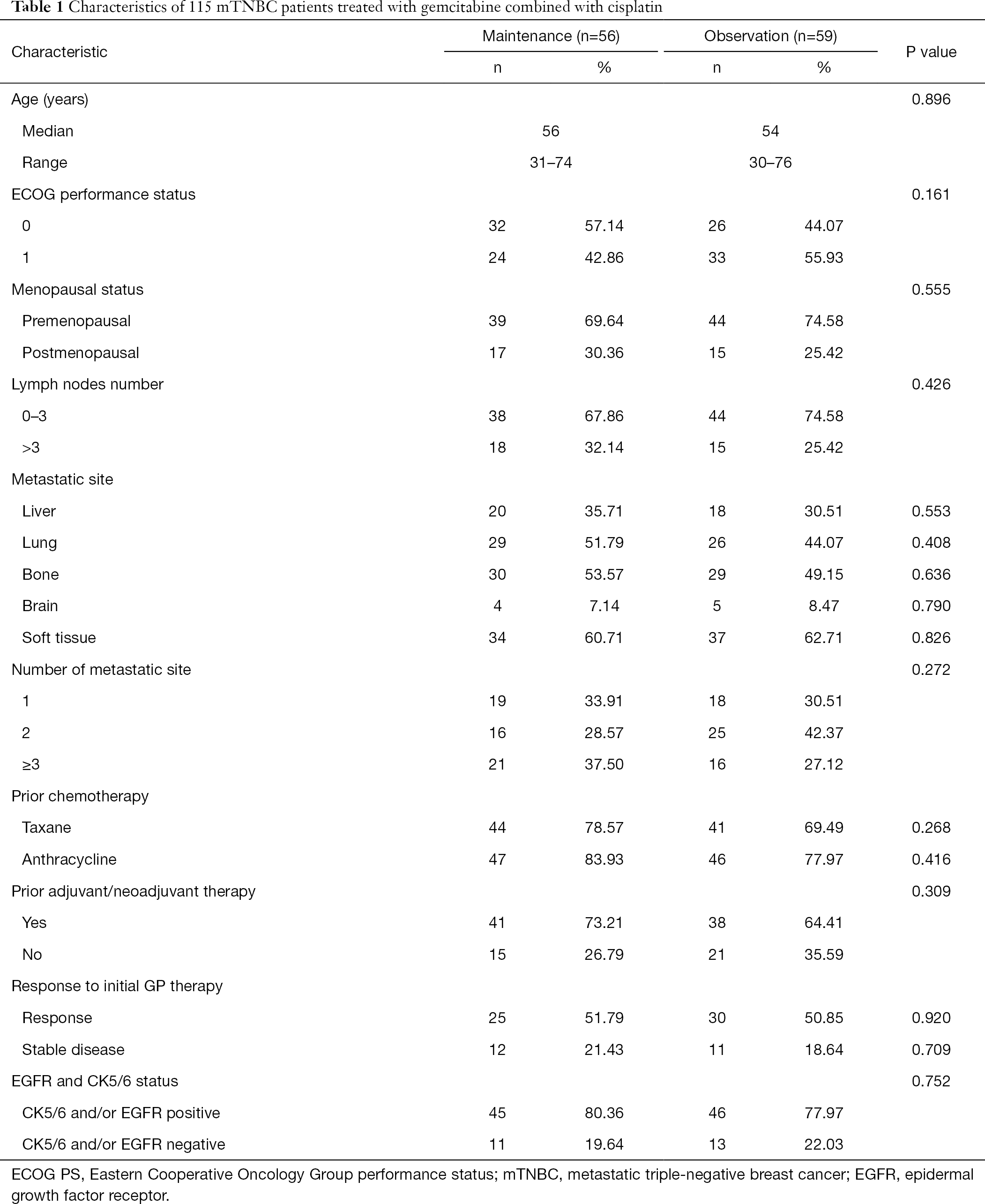 Patients with clinically detectable meningeal and/or brain parenchyma metastases, congestive heart failure, or reduced hepatic or renal function were excluded, as were those with HER2- or HR-positive cancers. We also excluded patients with concurrent tumors and those who had been diagnosed with tumor within the previous 5 years, as well as pregnant or breast-feeding women. The study was conducted in accordance with the Declaration of Helsinki (as revised in 2013) and was approved by the Ethical Committee of the First Affiliated Hospital of Wannan Medical College (No. 2008-7). Individual consent for this retrospective analysis was waived.

In this retrospective study, 115 of 164 patients achieved disease control, of whom 56 received capecitabine maintenance chemotherapy and 59 received observation. Patients in the maintenance group received capecitabine (1,000 mg/m2) orally bid for 2 weeks every 3 weeks along with metoclopramide and dexamethasone to prevent nausea and vomiting, until disease progression, intolerable toxic effects, or withdrawal of consent. In the observation group, patients received observation until disease progression or withdrawal of consent. Laboratory assessments, such as routine blood counts, serum liver function markers, creatinine, and tumor biomarker levels were carried out at the beginning of each cycle. The tumors were measured at baseline and every 2 cycles through computed tomography scanning, magnetic resonance imaging, ultrasound, or physical examinations. Efficacy and toxicity were evaluated every 2 cycles.

Tumor tissues from TNBC patients were fixed in formalin, embedded in paraffin, and cut to a thickness of 4 µm. The sections were baked and dewaxed, and the endogenous catalase was removed. After blocking, the sections were incubated with primary antibody targeting CK5/6 (1:250, MA5-12429, Thermo Fisher Scientific, France) and EGFR (1:250, MA5-13070, Thermo Fisher Scientific, France) overnight at 4 °C, then incubated with secondary horseradish peroxidase (HRP)-conjugated antibody (Cell Signaling Technology, Danvers, MA, USA). Sections were then stained with 3,3’-diaminobenzidine. Two independent pathologists scored the results. All sections were observed under fluorescence microscopy. The percentage of positive cells in 5 random high power fields (HPFs) and the intensity of positive staining were evaluated.

The primary endpoint of the study was PFS, and clinical efficacy and OS were the secondary endpoints. Response evaluation criteria for solid tumors (RECIST version 1.1) (18) was used to evaluate clinical efficacy. SPSS 19.0 software was used to analyze all data. The Kaplan-Meier estimator and log-rank test were used to analyze median PFS (mPFS) and mOS, and a Cox regression model was used to analyze the effects of age, menopausal status, metastatic sites, prior chemotherapy status, and ECOG. P<0.05 in a 2-sided test was considered to represent a statistically significant difference.

After the first 6 cycles of combination chemotherapy, 115 patients (70.12%, 115/164) had achieved disease control. Subsequently, 56 patients received maintenance therapy with capecitabine and 59 patients underwent observation alone. The maintenance group included 39 premenopausal women, and the observation group included 44 premenopausal women. The median ages in the maintenance and observation groups were 56 years and 54 years, respectively. All patients had an ECOG score of 0–1, and most patients in both groups had multiple metastatic sites and visceral metastases. More than 80% of the patients underwent surgical resection and received adjuvant/neoadjuvant chemotherapy. CK5/6 and EGFR were negatively expressed in nearly 20% of cases (Figure 1). The clinicopathological features of the patients are shown in Table 1. 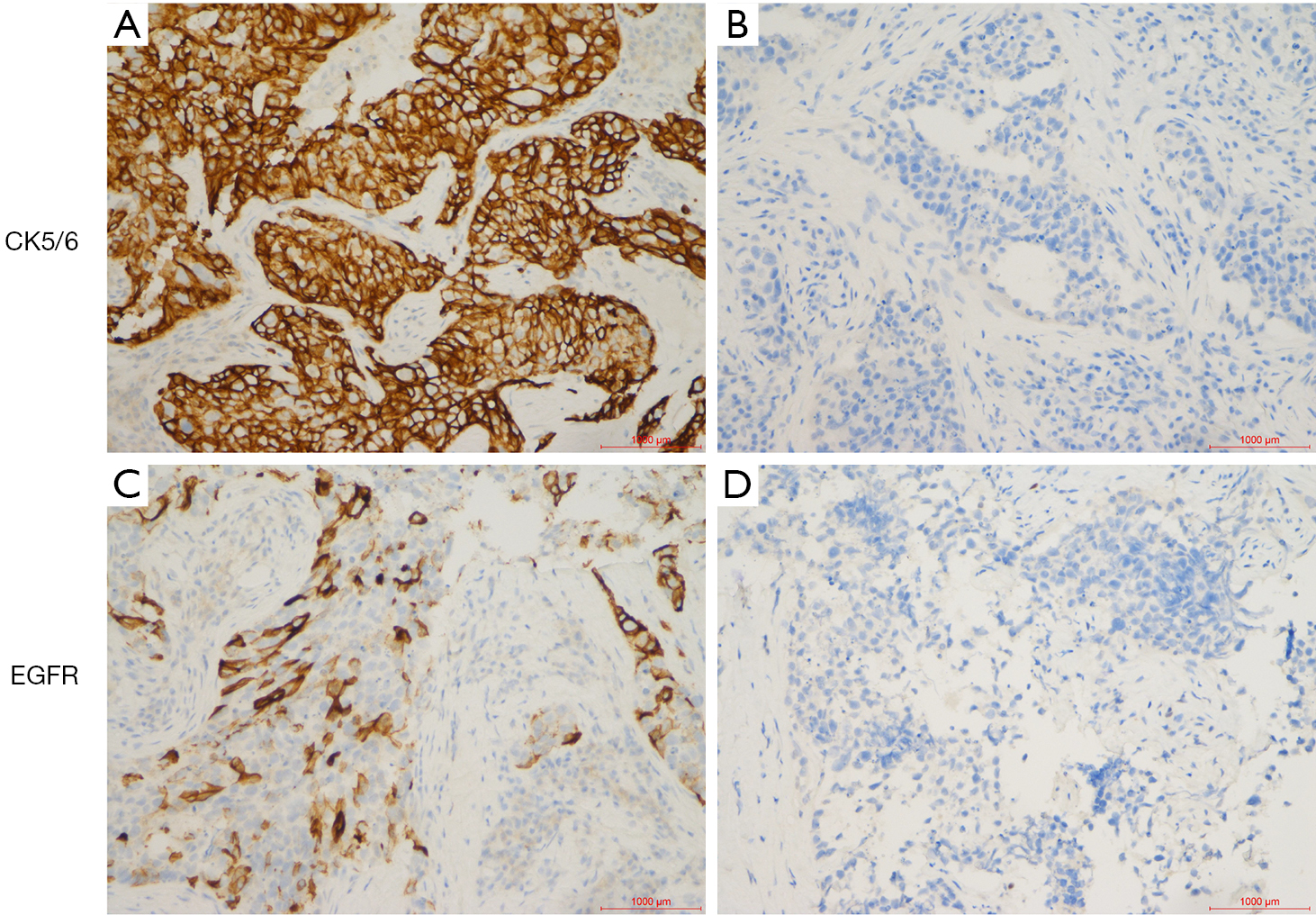 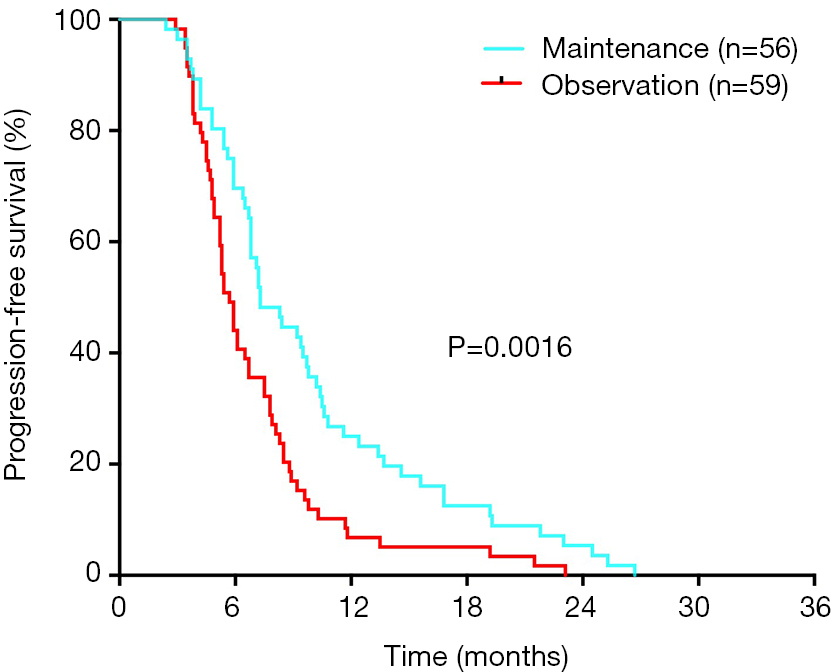 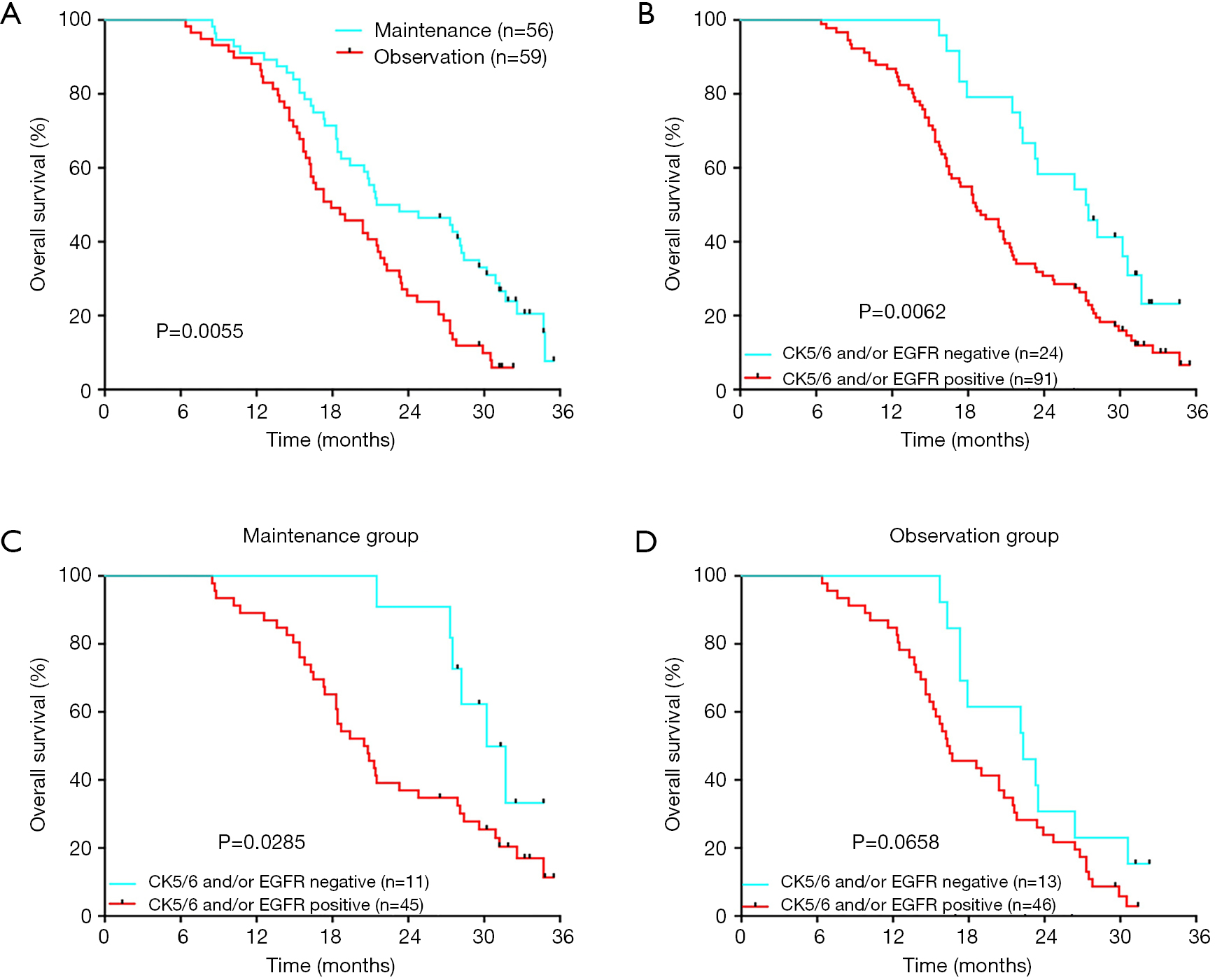 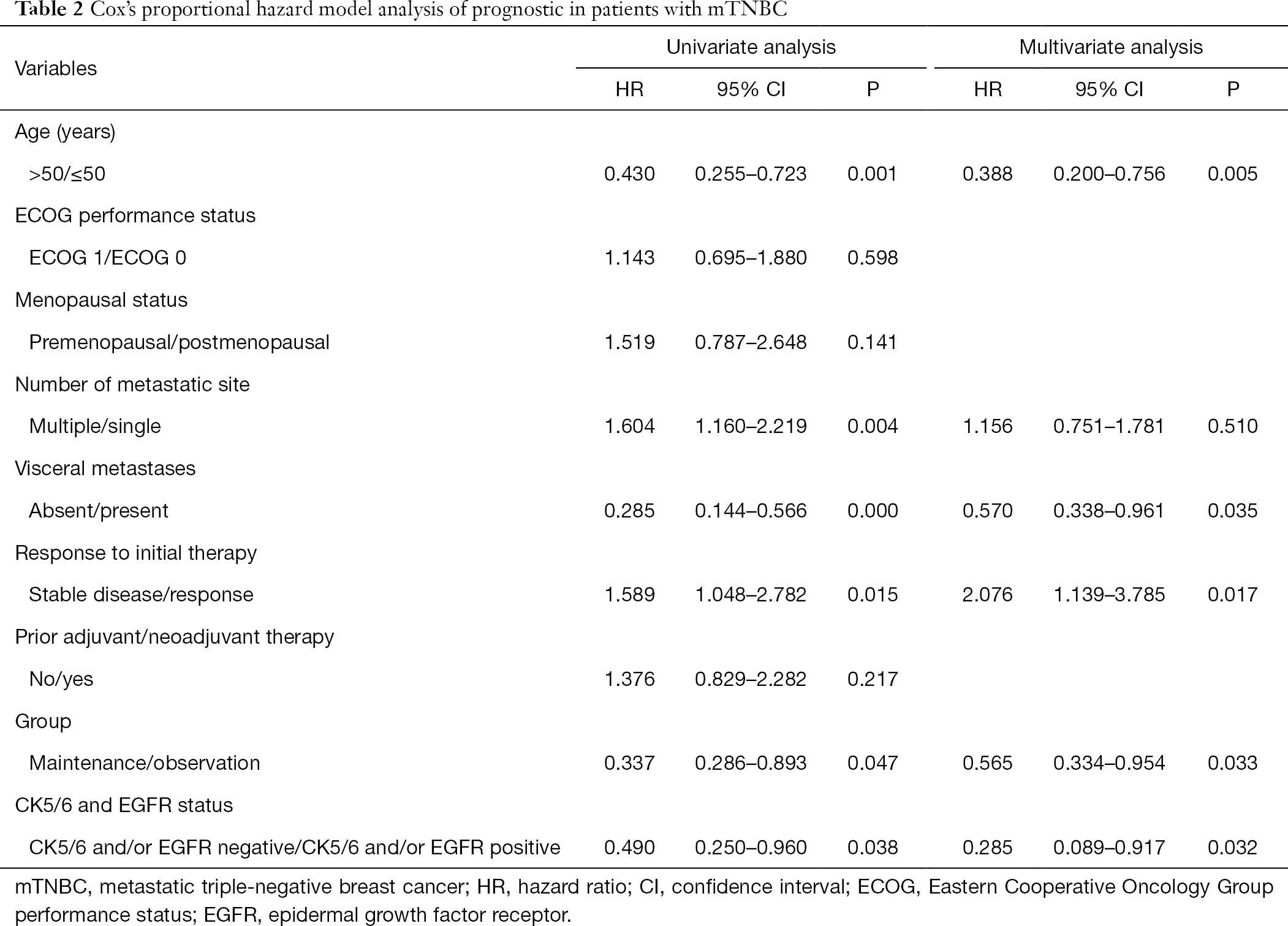 At present, cytotoxic drugs are still the main treatment for TNBC. However, once chemotherapy is withdrawn, tumors can quickly relapse and metastasize. Several studies have reported mPFS ranging from 3.8–5.1 months after the termination of chemotherapy (19,20). Therefore, maintenance therapy is particularly important, and increased attention is being focused on maintenance therapy in patients with TNBC. However, there is great variation in the mPFS (7.6–9.1 months) and mOS (18.1–19.2 months) reported by different studies (21,22).

The prognosis of TNBC currently depends on the molecular subtype. Among the diverse subtypes of TNBC, basal-like is one of the most malignant. The gold standard for identifying BLBC is still based on gene expression profiling. However, technical problems and high costs limit the detection of gene expression profiles as a routine test in clinical practice. Using immunohistochemistry, numerous studies have shown that BLBC can be identified by ER-, PR-, HER-, CK5/6, and/or EGFR positivity (23-25). In particular, CK5/6 is considered to be an extremely useful marker for identifying TNBC subtypes (26).

CK5/6 expression has been reported in 24–72% of TNBCs (27,28). Patients with CK5/6-positive tumors often show a shorter survival time, and CK5/6 has been put forward as an independent prognostic factor in breast cancer (11,26). The overexpression of EGFR has been observed in more than half (57%) of BLBCs (11), and its expression was reported to be closely related to tumor grade and lymph node metastasis in 60.3–71.4% of patients with TNBC. Another study reported that patients with EGFR-positive TNBC responded poorly to neoadjuvant chemotherapy and showed poor DFS and OS compared with patients with EGFR-negative status. Furthermore, a multivariate analysis showed EGFR to be an independent predictor of PFS and OS in TNBC (29,30). Thus, CK5/6 and EGFR are widely considered as molecular markers for BLBC. Using this surrogate panel, 79.13% of patients with TNBC were classified as BLBC in our study. Among the 115 patients who achieved disease control, we found that the mOS of patients with BLBC was significantly shorter than that of non-BLBC patients (18.6 vs. 27.4 months, P=0.0062), and the prognosis of non-BLBC patients was significantly better than that of BLBC patients. Multivariate regression analysis revealed that age, visceral metastases, response to initial therapy, maintenance therapy, and CK5/6 and EGFR status were independent prognostic factors for, which was similar to the results reported by other studies (3,31,32).

A platinum-based combination chemotherapy regimen has been considered as an alternative or even as the preferred first-line chemotherapy option for treating patients with mTNBC (33-35). Some preliminary clinical trial data (36), a randomized neoadjuvant clinical study (37), and a retrospective case review of adjuvant therapy (21) have provided some level of evidence for platinum activity in TNBC patients. In our study, we observed that the objective response rate and the disease control rate were 51.83% (85/164) and 70.12% (115/164) in patients with TNBC who received 6 cycles of combination chemotherapy as a first-line treatment, which was similar to the results reported by previous studies. Patients in the maintenance group received 6 cycles of combination chemotherapy and another 8 (median) cycles of single capecitabine, while those in the observation group received only 6 cycles of combination chemotherapy. In the maintenance group, the mPFS and mOS were 1.6 and 4.5 months longer, respectively, than those in the observation group (7.3 vs. 5.7 months and 22.4 vs. 17.9 months, respectively), and the differences were significant. We suspect that these results are attributable to the additional maintenance treatment. More cycles may improve the clinical benefit, but more cycles also encompass more side effects (16,20,38,39). Significantly higher bone marrow toxic effects, especially grade 3–4 neutropenia, were observed in the maintenance treatment group than in the observation group (32.14% vs. 3.39%, P<0.001), and the incidence rates of nausea, vomiting, and HFS were also all significantly higher in the maintenance group (83.47% vs. 11.86, P<0.001; 69.64.6% vs. 8.47%, P<0.001; and 32.14% vs. 8.47%, P=0.002, respectively).

The authors thank B. Draper and J. Reynolds for English language editing.

Funding: This research was supported by the National Natural Science Foundation of China (No. 81802651) and Foundation of “Peak” Training Program for Scientific Research of Yijishan Hospital, Wannan Medical College (No. GF2019G11).

Reporting Checklist: The authors have completed the REMARK reporting checklist. Available at http://dx.doi.org/10.21037/tcr-20-1760

Conflicts of Interest: All authors have completed the ICMJE uniform disclosure form (available at http://dx.doi.org/10.21037/tcr-20-1760). The authors have no conflicts of interest to declare.

Ethical Statement: The authors are accountable for all aspects of the work in ensuring that questions related to the accuracy or integrity of any part of the work are appropriately investigated and resolved. The study was conducted in accordance with the Declaration of Helsinki (as revised in 2013). The study was approved by the Ethical Committee of the First Affiliated Hospital of Wannan Medical College (No.: 2008-7) and individual consent for this retrospective analysis was waived.