SEER 18 population-based cancer Registries (1975 to 2017 dataset) were chosen to select patients, which is maintained by the National Cancer Institute and covers nearly 28% of the population in the United States. The inclusion criteria in our study were that (I) patients with stage III non-small cell lung cancer were diagnosed between 2010 and 2015; (II) patients aged 18 years or older who were diagnosed; (III) the information of patient consisted of the age of diagnosis, race, sex, primary site, laterality, stage T, stage N, grade, histology, surgery, survival status and time. Individuals who had unclear information were subsequently excluded. We collected and retrospectively analyzed the demographic data of all eligible cases.

The study was conducted in accordance with the Declaration of Helsinki (as revised in 2013). This article does not contain any studies with human participants or animals performed by any of the authors. All procedures performed in study involving human data were extracted freely from the SEER Research Data available to the public online (https://seer.cancer.gov/data/access.html).

The analysis of differences in clinical characteristics between the different groups was performed by using the chi-square test. An analysis of Cox regression was implemented to assess the risk factors of overall survival. It was set up in that P<0.05 was considered statistically significant. R software was used to set up a nomogram based on the numerous possible prognostic factors which could be associated with the overall survival. The validation of the nomogram was executed, and the results were evaluated based on the concordance index and the calibration curve. The concordance index was used to denote the predictive accuracy and differentiation ability of each factor of the nomogram. Calibration curves were performed to check the calibration of the nomogram. Kaplan–Meier curves were used to illustrate and compare the overall survival of patients in different clinical characteristics. Data extraction was collected using SEER*Stat software version 8.3.6.1 and data analyses were all performed using R software (version 4.0.0).

Demographics of the entire cohort of patients

The Cox proportional hazards model was performed to investigate how each variable could help predict overall survival. Multivariate analyses indicated that factors such as age, sex, site, histology, grade, stage T, and N, chemoradiotherapy, surgical treatment were associated with the prognosis of patients (Table 2).

Building and validating the novel nomogram

The model that incorporated the above factors was developed and presented as the nomogram (Figure 1). In the nomogram, each predictor was scored based on a point scale. By adding up the total scores projected in the scale at the bottom, we could then predict the probability of overall survival for patients with stage III non-small cell lung cancer. The concordance index of the novel nomogram was 0.751, indicating the good discrimination ability of the model. The calibration curves also showed good consistency in the probability of 5-year overall survival between the actual observation and the nomogram prediction (Figure 2). 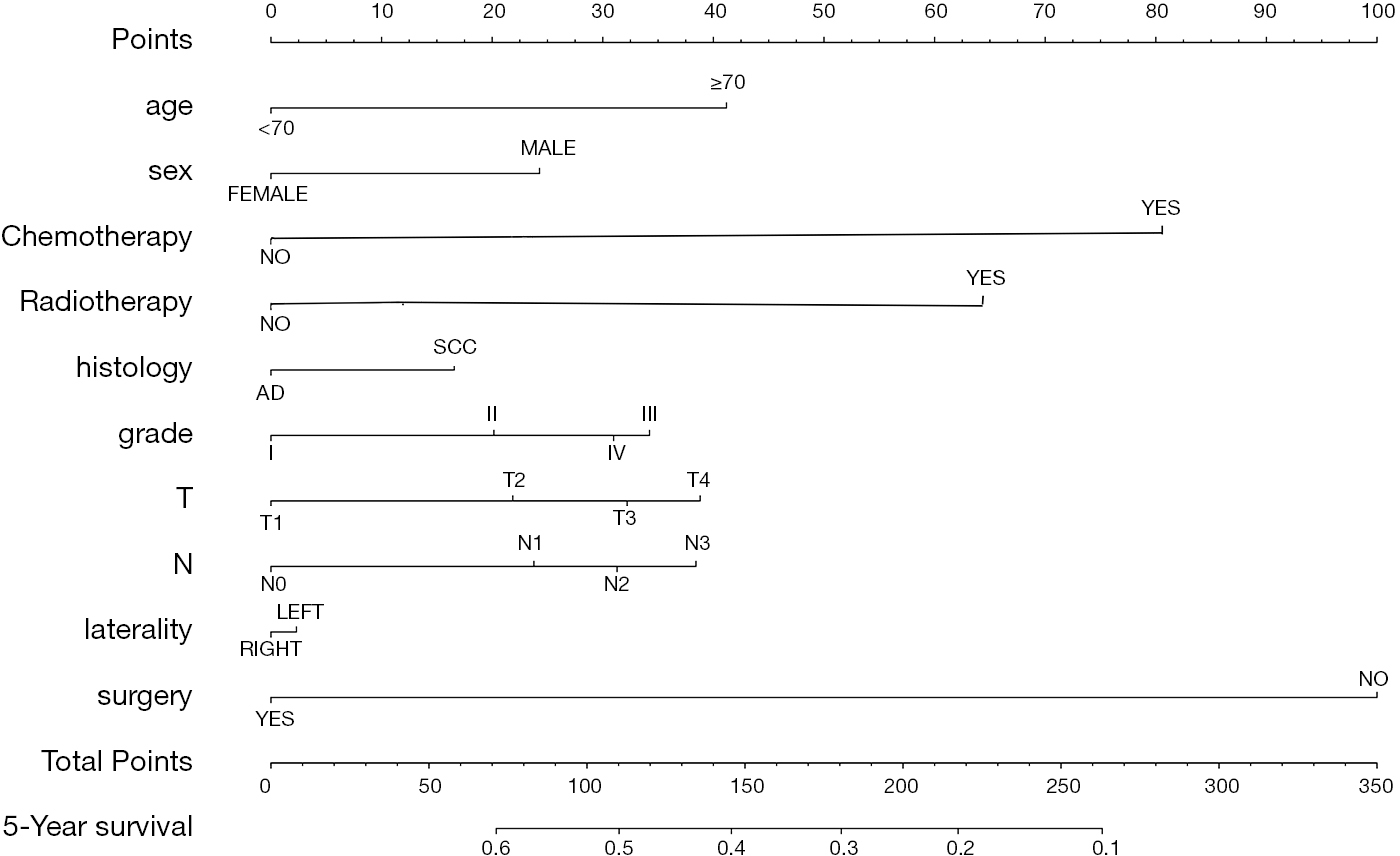 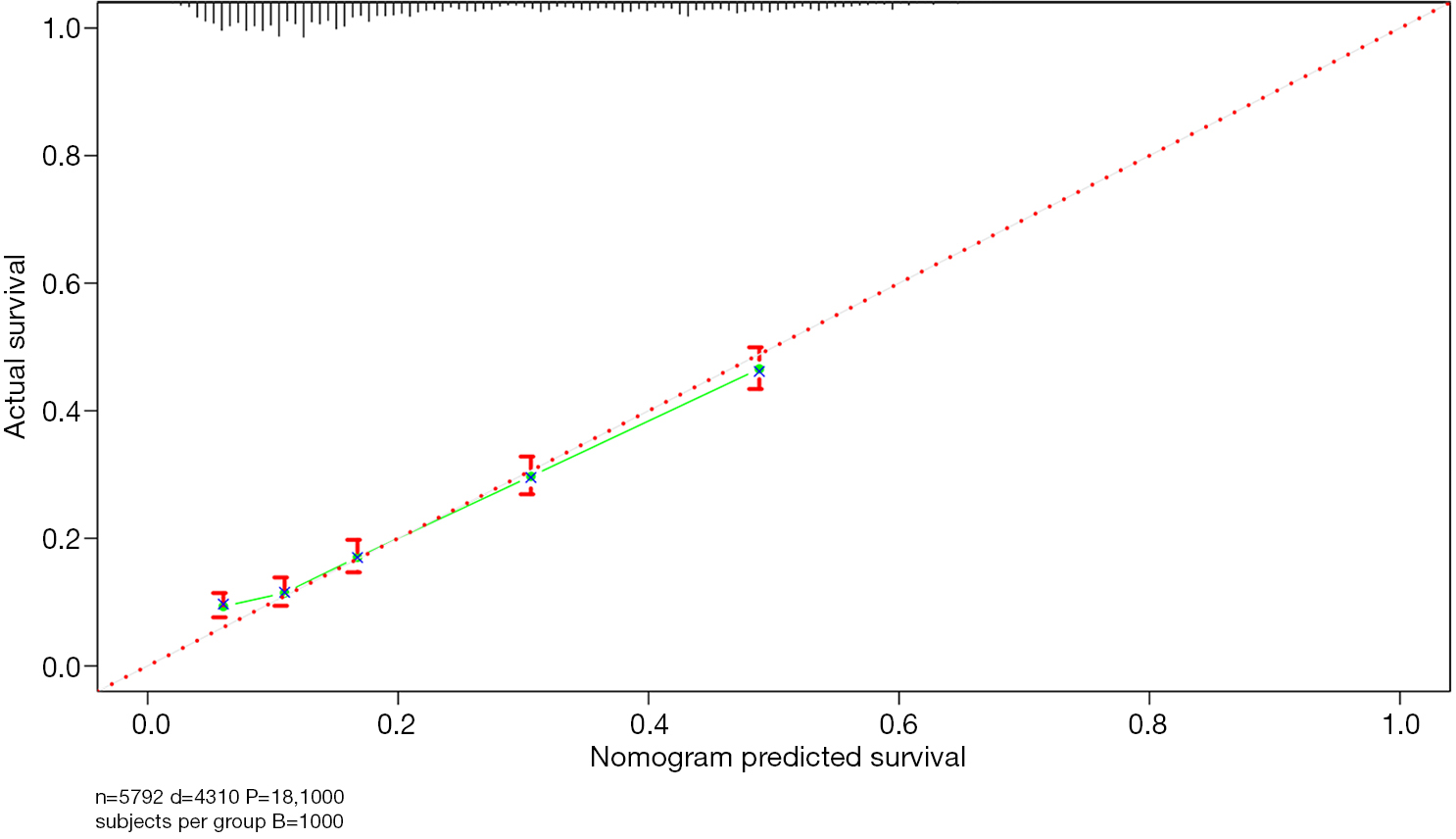 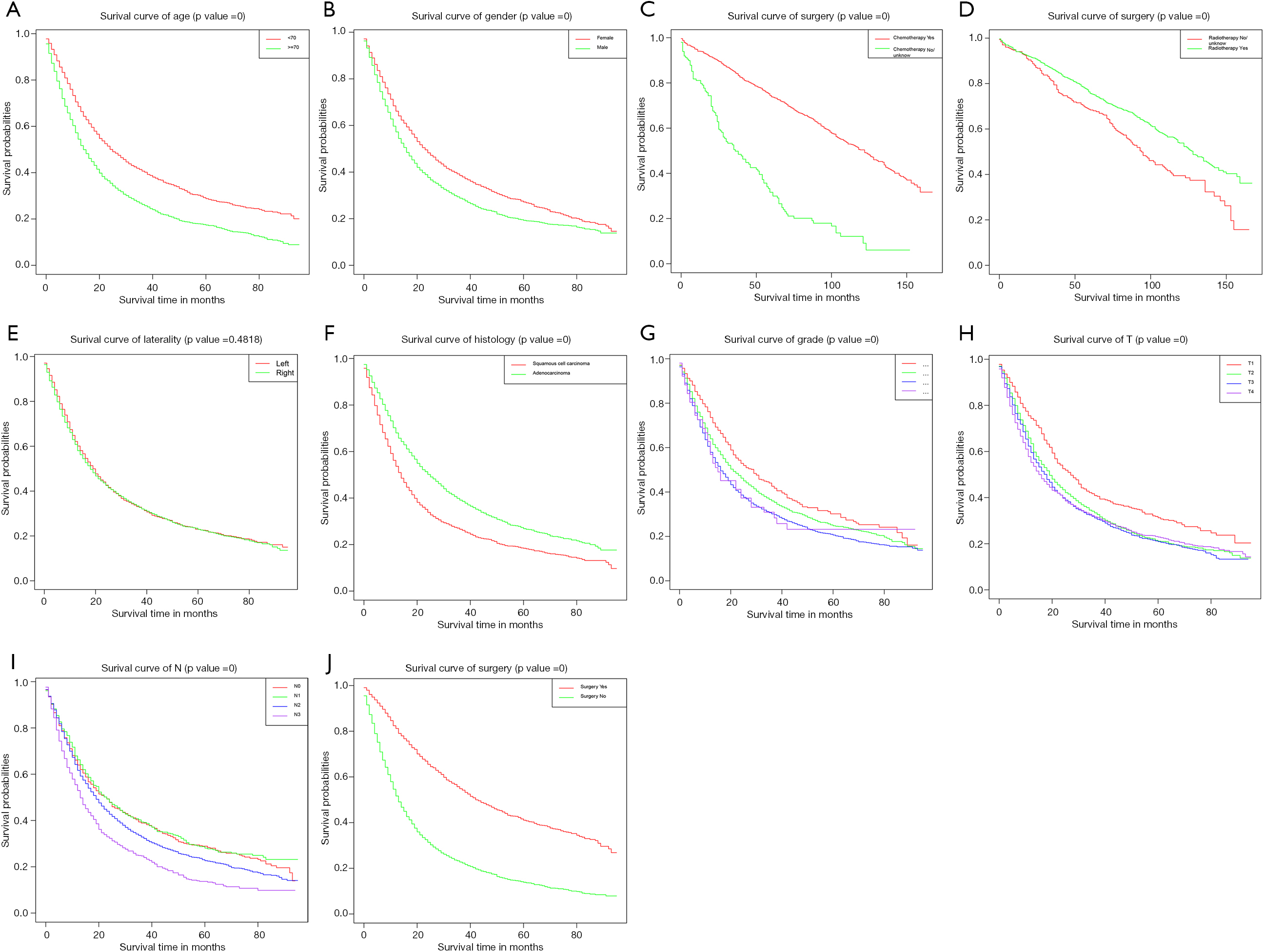 Demographics of the patients with different overall survival 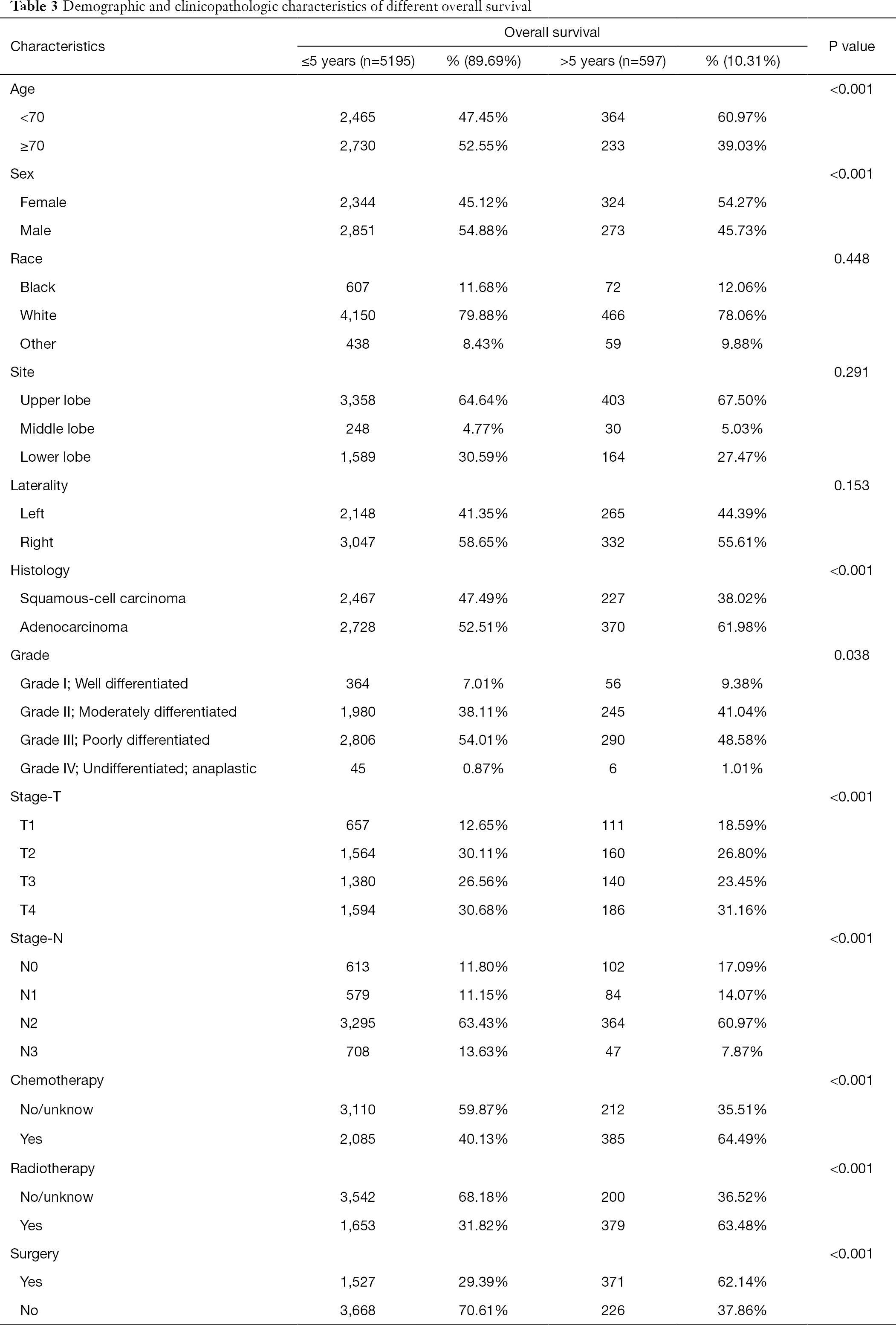 The reported studies had demonstrated that women with non-small cell lung cancer had a better prognosis than men with longer survival (14-16). Foeglé and colleagues found that there was no gender difference by retrospectively analyzing the outcomes of 1,738 non-small cell lung cancer patients (17). However, in our study, the 5-year survival of female patients with adenocarcinoma was significantly higher than that of male patients with squamous cell carcinoma patients, which might mean that adenocarcinoma had a better prognosis than squamous cell carcinoma. The significant difference of 5-year survival in age, sex, race, site, histology, grade, stage T, and N, chemoradiotherapy, surgical treatment was also found in the presented study except race, site, and laterality.

Multimodality therapy is an appropriate treatment approach for stage III non-small cell lung cancer patients. But the optimal treatment strategies are still indistinct. When surgical resection can be accomplished after adjuvant therapy with low risk and a good chance of complete resection, the survival time may be optimal. Despite the lack of information on chemoradiotherapy, we were still able to see that surgery could improve the prognosis of patients with stage III non-small cell lung cancer and there was a higher rate of surgical treatment among those with a survival of more than 5 years compared with those with the survival of less than 5 years. The results of our study are consistent with that of some previous studies (18).

There still are some several limitations that deserve attention in our study. First, because the study is a retrospective study, it will have an unavoidable confounding bias. Second, the details of chemotherapy and radiotherapy are not obtained in the SEER database, which hindered further prognostic analyses. Third, the population of our study was patients in America, which can not represent the global population. Finally, because the external validation was not accomplished, before the proposed nomogram can be used in clinical practice, it needs to be replicated and verified prospectively.

We thank Steven Wong for providing language editing assistance in this study.

Reporting Checklist: The authors have completed the TRIPOD reporting checklist. Available at http://dx.doi.org/10.21037/tcr-20-3173

Conflicts of Interest: Both authors have completed the ICMJE uniform disclosure form (available at http://dx.doi.org/10.21037/tcr-20-3173). The authors have no conflicts of interest to declare.

Ethical Statement: The authors are accountable for all aspects of the work in ensuring that questions related to the accuracy or integrity of any part of the work are appropriately investigated and resolved. The study was conducted in accordance with the Declaration of Helsinki (as revised in 2013). This article does not contain any studies with human participants or animals performed by any of the authors. All procedures performed in study involving human data were extracted freely from the SEER Research Data available to the public online (https://seer.cancer.gov/data/access.html).