Lung cancer is the most common malignancy worldwide, with high rates of incidence (2.1 million new cases in 2018) and mortality (1.8 million deaths in 2018) (1). Non-small cell lung cancer (NSCLC) accounts for about 83% of lung cancer cases (2). Although significant progress in the fields of immunotherapy (3,4) and tyrosine kinase inhibitors (5) in the recent decades has prolonged survival time to some extent, the prognosis of advanced and metastatic NSCLC remains unsatisfactory (1). Therefore, searching for new potential treatment targets is worthwhile.

Cancer cells prefer aerobic glycolysis to obtain energy to support their rapid growth, even in the presence of abundant oxygen, a phenomenon known as the ‘Warburg effect’ (6). As a consequence, a large volume of lactate is produced. For cancer cells to sustain continuous glycolysis, exporting redundant lactate and maintaining intracellular pH stability is critical. The monocarboxylate transporter (MCT) family, especially MCT1 and MCT4, have been recognized as important lactate transporters. Also, the over-expression of MCT1 and MCT4 has been observed in various cancers (7-9) including esophageal squamous cell carcinoma (10), glioblastoma (11) and breast cancer (12,13), osteosarcoma (14), hepatocellular carcinoma (15,16), oral squamous cell carcinoma (17), prostate cancer (18), and lung adenocarcinoma (19), and has also been associated with survival outcomes. In urothelial carcinoma, increased MCT4 levels, either ribonucleic acid (RNA) or protein, is a predictor of worse overall survival (OS). Silencing of MCT4 has been shown to promote the intracellular accumulation of lactate and tumor growth reduction (20). Besides the expression of MCT4 in cancer cells, MCT4 expression in cancer-associated fibroblasts was also associated with worse prognosis in patient with pancreatic ductal adenocarcinoma (21).

Although both MCT1 and MCT4 have been reported to play an important role in cancer progression, their function and effect on prognosis may be different to some extent. For example, elevated MCT1 levels were indicative factor for worse survival in breast cancer (22). However, in triple-negative breast cancer, MCT4, and not MCT1, had a significant deleterious impact on survival (23). It is suggested that in context of different tumor types, the role of MCT1 and MCT4 may be varying. Besides, although both MCT1 and MCT4 act as lactate and ketone bodies transporters, MCT1 has a much higher affinity for both lactate and pyruvate than MCT4 (24). Also, MCT1 has a bi-directional transport function for lactate shuttle, while MCT4 mainly focuses on lactate export. Thus, a comprehensive evaluation of MCT1 and MCT4 is meaningful. In this study, we investigated both the expression of both MCT1 and MCT4 and examined their association with survival. Our results suggested that MCT4, and not MCT1, is a predictive marker of worse survival outcome in patients with NSCLC. We present the following article in accordance with the REMARK reporting checklist (available at: http://dx.doi.org/10.21037/tcr-20-3117).

In this retrospective study, primary NSCLC patients who signed informed consent and had well-stored surgical specimens in the biological sample bank of Zhejiang cancer hospital were reviewed. Surgical samples between July 2011 and October 2012 were chosen randomly to ensure surgical homogeneity and sufficient follow-up time to obtain the prognosis data. Tumor tissues and adjacent lung tissues were collected from the tumor tissue bank. TNM stages were evaluated according to the 7th edition of the international staging system (25). The follow-up work was carried out by reviewing medical records and telephone interviews (up to May 20th, 2019). Progression-free survival (PFS) and OS time were calculated from surgery date to disease progression or death from any cause, respectively. The Ethics Committee of Zhejiang Cancer Hospital approved this research (approval number IRB-2019-41). The study was conducted in accordance with the Declaration of Helsinki (as revised in 2013). The study was approved by The Ethics Committee of Zhejiang Cancer Hospital (IRB-2019-41) and individual consent for this retrospective analysis were waived.

IHC staining was performed to evaluated the expression of MCT1 and MCT4, in both tumors and paired adjacent lung tissues in each case. In brief, the formalin-fixed paraffin-embedded tissues were cut into a series of 5 µm-thick sections. The sections were de-paraffinized, rehydrated and underwent antigen retrieval using Dako EnVisionTM FLEX Target Retrieval Solution (pH 9.0) at 95 °C for 20 minutes. Anti-SLC16A3 (MCT4) antibody (Rabbit polyclonal antibody, HPA021451, Sigma-Aldrich), and anti-MCT1 antibody (Rabbit polyclonal antibody, ab238825, Abcam) were used as primary antibodies, and were diluted at a ratio of 1:100. After 2 hours of primary antibody incubation at room temperature, incubation with a secondary antibody (PV-9000, Zhongshan Jinqiao Biotechnology Co. Ltd., Beijing, China) was performed at room temperature for 30 minutes. Finally, 3,3’-diaminobenzamine and hematoxylin were used for coloration of the immune complex and nucleus, respectively. The expression of MCT4 and MCT1 was assessed by multiplying the staining intensity score and the percentage score as described in our previous study (26). A final score ≥6 was defined as high expression. 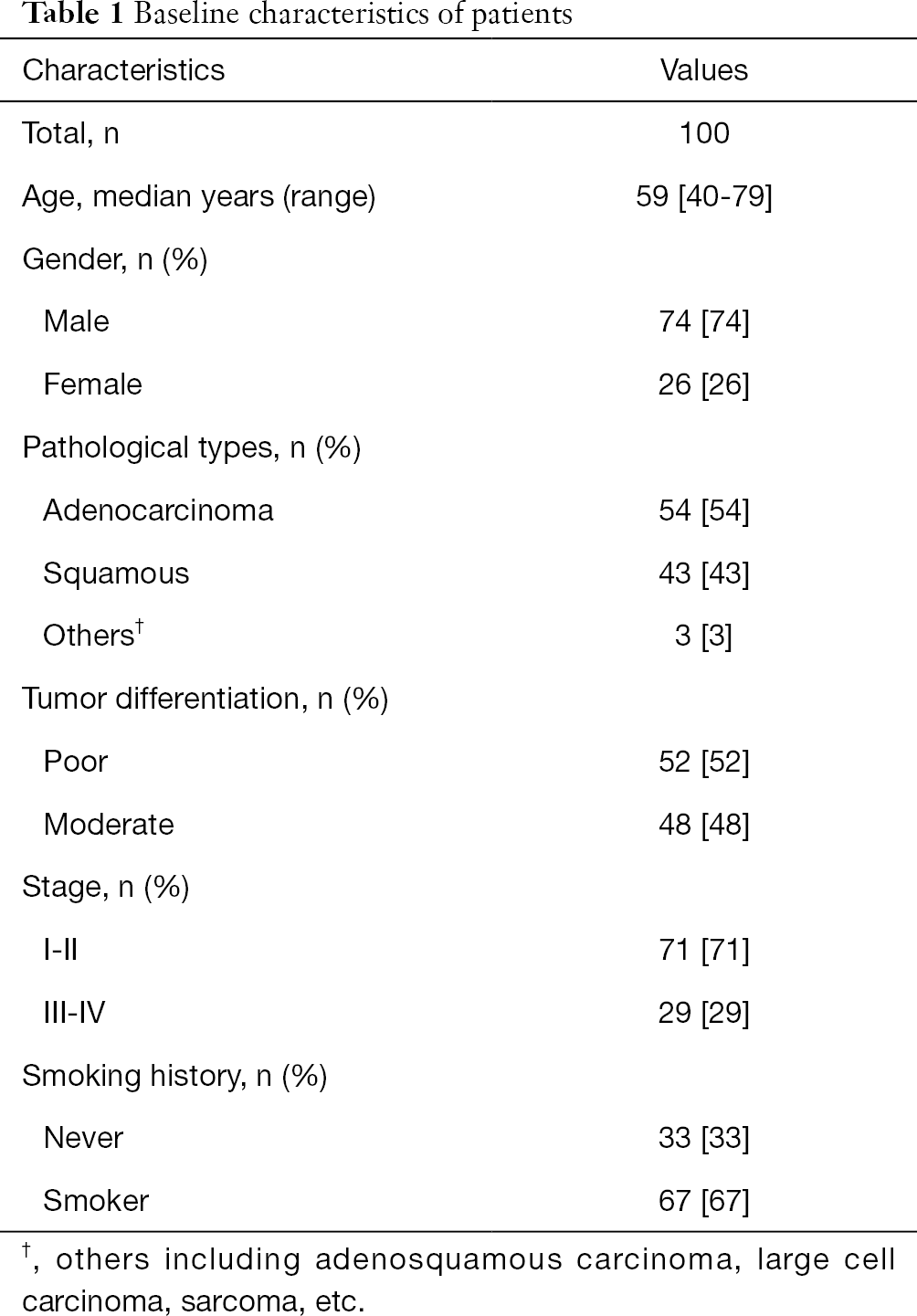 Expression of MCT1 and MCT4 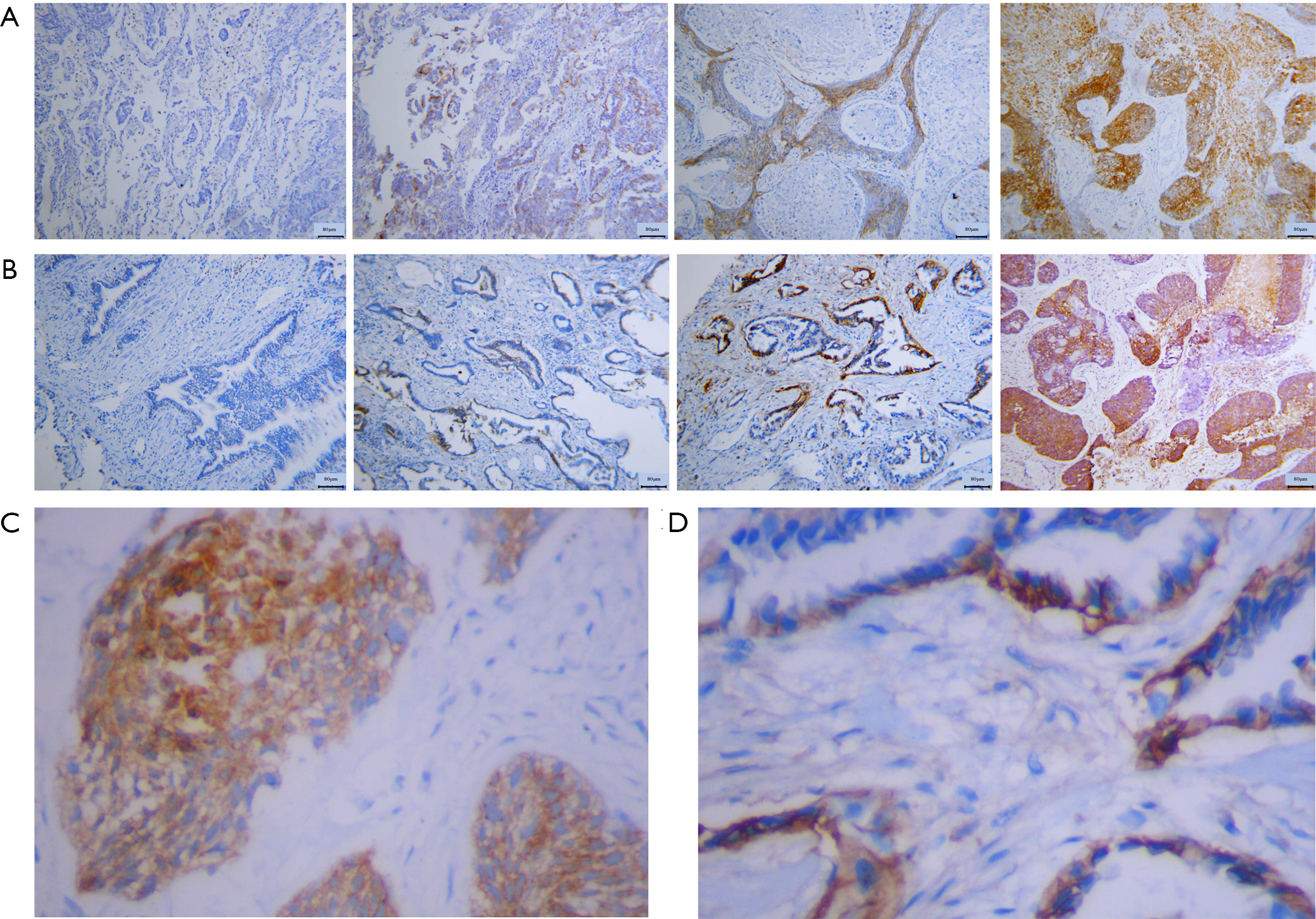 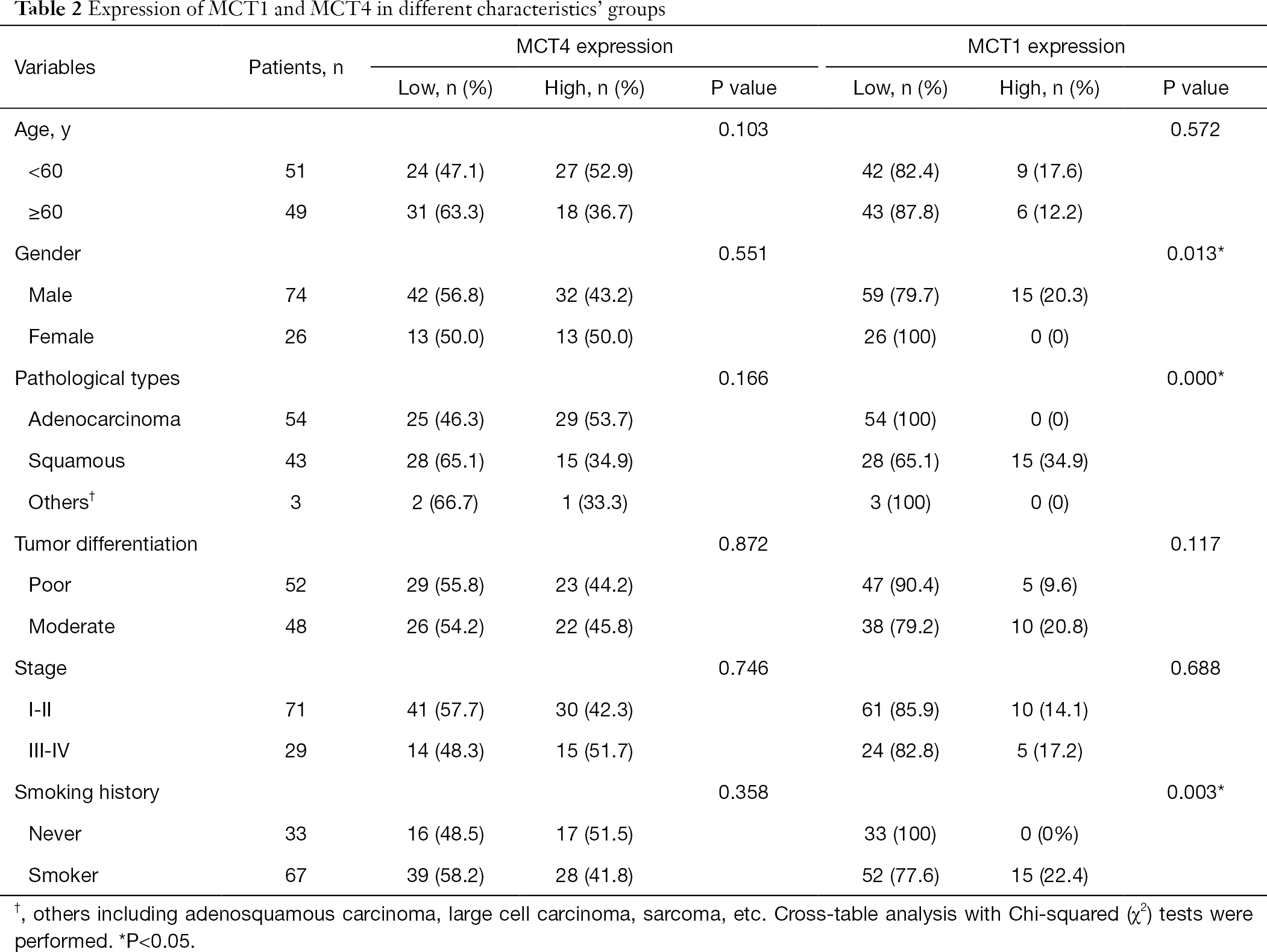 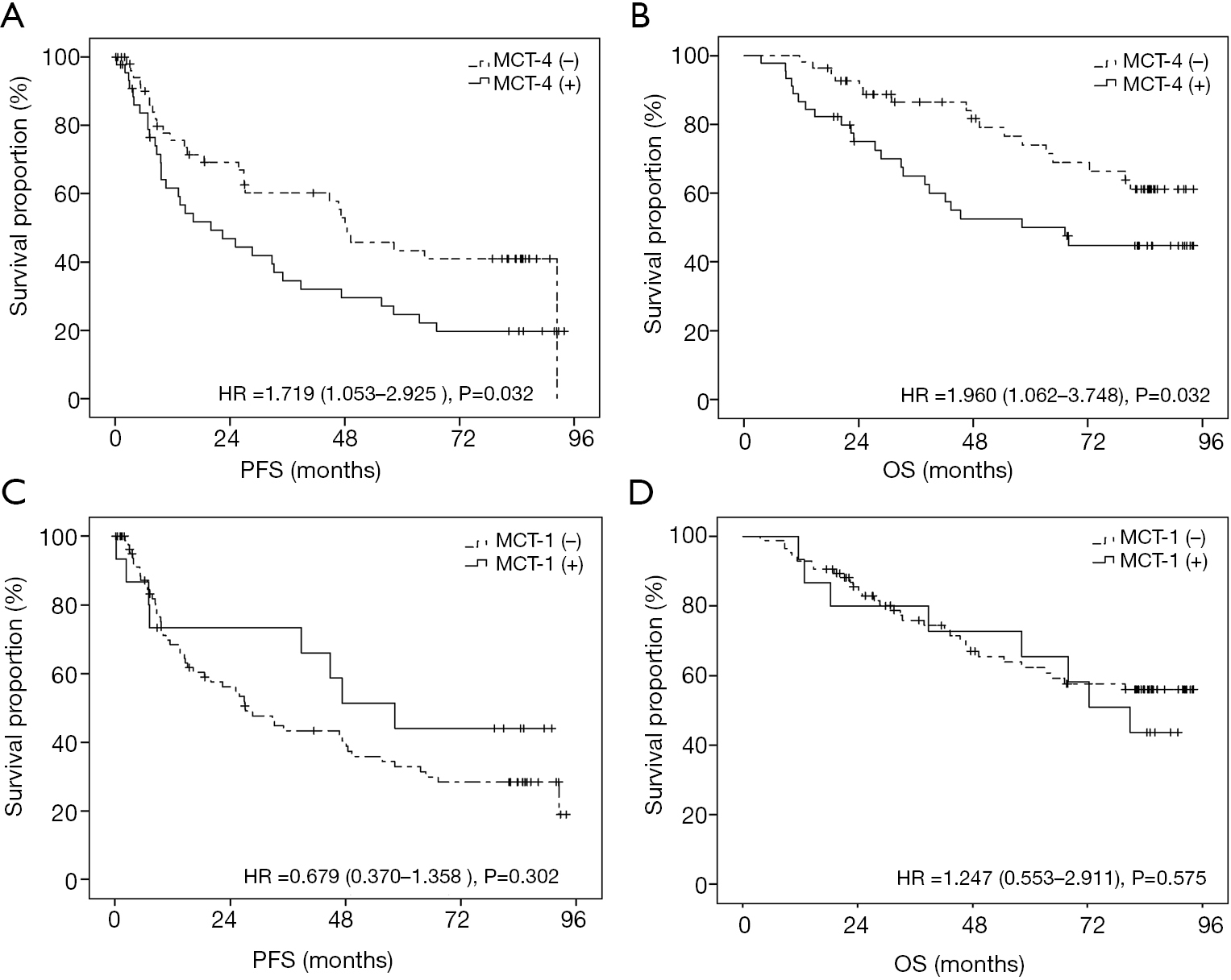 To further elucidate the independent role of MCT4 in prognostic prediction, MCT1, MCT4 and other clinical characteristics were analyzed using Cox proportional hazards analysis, and the results are shown in Table 3. Advanced cancer stage and MCT4 were identified as predictive indicators for both PFS [HR (MCT4) =1.888 (1.114–3.199), P=0.018] and OS [HR (MCT4) =2.421 (1.271–4.610), P=0.007], while pathological types and differentiation status of tumor cells were the rest prognostic factor for PFS. In our multivariate analysis, high expression of MCT4 and advanced stage were two independent prognostic factors for both PFS and OS. In addition, the poor differentiation status of cancer cells was another independent prognostic factor for PFS. 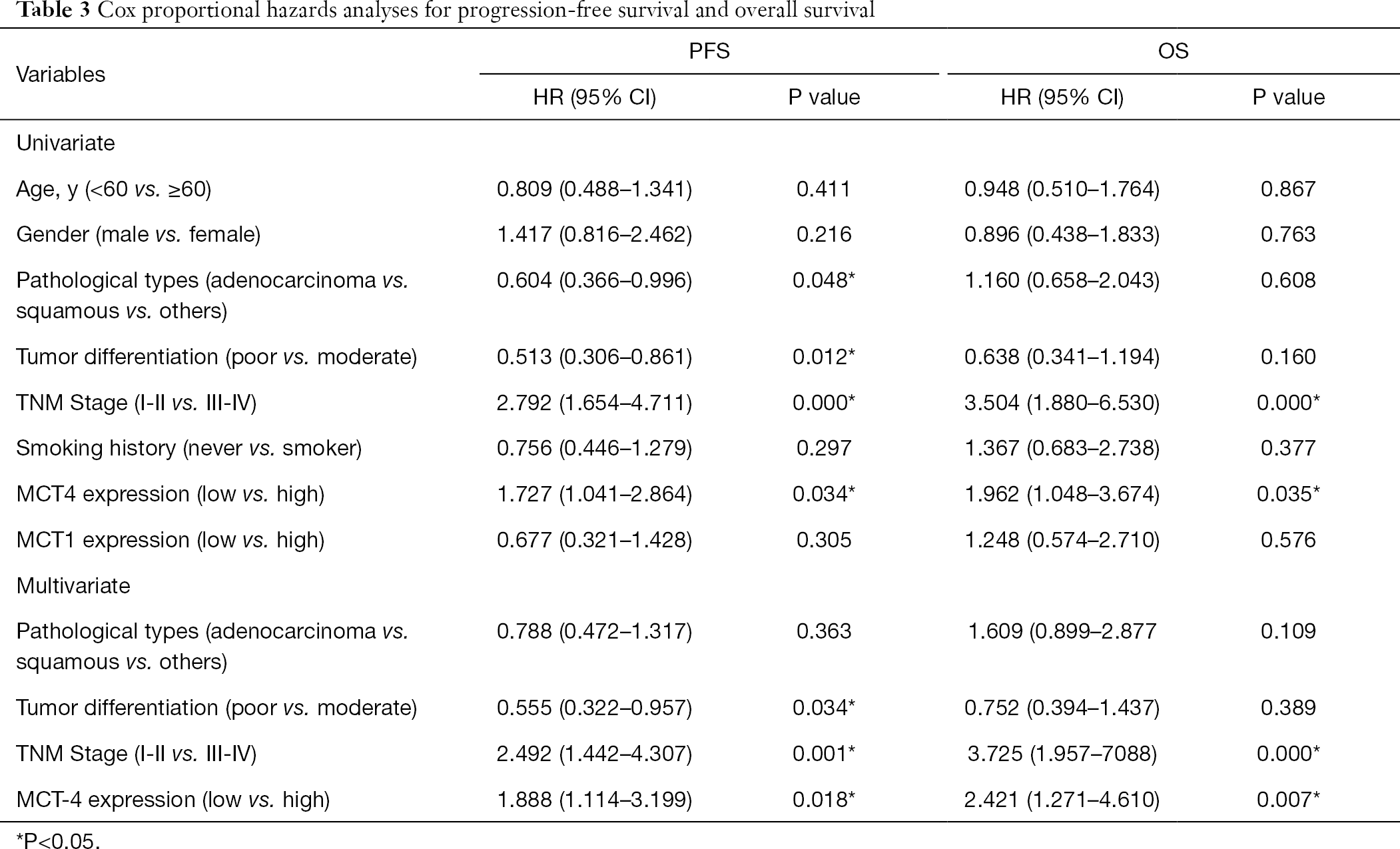 To further clarify the advantage population for MCT4 to predict outcomes, a series of subgroup and interaction analyses were performed in different clinical characteristic groups (Figure 3). MCT4 seemed to be more predictive of OS in elderly patients (≥60 years), patients with squamous cell carcinoma, tumors with poor differentiation, advanced stages, smokers, and PFS in males, patients with squamous cell carcinoma, tumor with poor differentiation, and smokers for PFS. However, there was no significant difference in HR in the interaction analyses (all P values were >0.05).

Glycolysis and reprogramming energy metabolism was proposed as a new hallmark of cancer (27). During the past time, lactate was considered to be a metabolic waste in glycolysis. However, increasing evidences has shown that lactate exerts multiple activities in tumor cells’ biological function (28). Lactate can be utilized as a source of energy for oxidative cancer cells, function as a pro-angiogenic agent, and also play crucial roles in stimulating amino acid metabolism, inhibiting histone deacetylases and inducing immune tolerance, et al. (29). Thus, how to properly deal with lactate is of great significance in glycolytic cancer cells. MCT family members plays an important role in lactate transport, especially MCT1 and MCT4. These two proteins were found widely expressed in various malignancies and play multiple roles in cancer, not merely limited to monocarboxylate transport, but also in metabolic exchanges, metabolic signaling, and cancer metastasis.

In this study, we reported that the expression of MCT4, but not MCT1, was associated with worse OS and PFS in NSCLC patients. We also tested whether the combination of MCT1/4 IHC staining (“any” or “both”) is a better prognostic factor. Since there were only five cases are both MCT1/4 high expression (data are shown in Table S1), we examined the predictive role of MCT1/4 (+), which was defined as MCT1 or MCT4 positive. In our study, MCT1/4 (+) predicted worse OS for NSCLC patients [HR =2.142 (1.101–3.807), P=0.024)], however, it failed to be a prognostic factor for PFS [HR =1.501 (0.901–2.462), p=0.121)] (Figure S1). Thus, our results demonstrated that MCT4 is a better prognostic factor for NSCLC patients. As mentioned above, aerobic glycolysis is an essential step in the metabolic reprogramming of cancer cells. In this process, MCT1 and MCT4 play important roles in lactate transport and maintaining intracellular pH. Although MCT1 has a much higher affinity for lactate transport than MCT4 (24), in our study, we found high MCT4 expression, instead of MCT1 expression, was an independent indicator for worse prognosis. In addition, the expression of MCT4 was more frequently observed in NSCLC tumor cells.

There are several potential mechanisms to explain why tumoral MCT4 levels, but not MCT1, are more relevant to a worse prognosis. Firstly, compared with MCT4, MCT1 has markedly higher affinity, not only for lactate transport, but also for other substrates such as pyruvate, et al. (24). On the contrary, MCT4 exhibits high specificity for lactate transport, with lower affinity and high Km and Ki values for other substrates (24,30). The excessive loss of pyruvate from the cell may reduce the renewal of nicotinamide adenine dinucleotide (NAD+) during lactate production, which is necessary for maintaining a high glycolytic flux. Treatment with an MCT1 inhibitor in vitro were reported to slightly promoted cell growth in most glycolytic cells (23). Secondly, MCT1 also acts as a bi-directional transport through lactate shuttle in specific cells and tumor-stroma interplay, while MCT4 mainly focus on the export of lactate (31). Exporting lactate to the extracellular matrix were proved crucial for oxygenation of cancer cells, which used lactate as a sources of energy (29). Meanwhile MCT4 expression markedly increased the pH value gradient between the intracellular and extracellular environments, paralleled by increased tumor growth and diminished necrotic regions (32). Thirdly, the presence of hypoxia response elements (HREs) in the promoter region of MCT4 makes it a direct hypoxia induced factor (HIF)-1-target gene (33,34). Thus, MCT4 expression in the tumor may reflect HIF-1 activation, which promotes epithelial to mesenchymal transition (EMT), angiogenesis, and metastasis of tumor cells. Finally, MCT4 expression was previously found to be abundant in the neonatal heart of rat, but was absent in the adult heart, where MCT1 expression is high (35), suggesting that MCT4 expression is more likely to occur in glycolytic cells (35).

Ruan et al. reported that high MCT4 expression is predictive in patients with lung adenocarcinoma. However, their study did not mention whether MCT4 is a prognostic factor in other types of NSCLC, such as squamous-cell carcinoma. Our study’s subgroup analyses revealed a trend that MCT4 seemed to be more predictive in patients with squamous cell carcinoma (Figure 3). However, our study found no significant difference in the interaction analyses (all P values are >0.05).

Further studies may be required to explore and demonstrate the potential mechanisms. Based on our findings and those of numerous studies focus on the functions of MCT4 in cancer, we believe that MCT4 has great potential to be an anticancer target for patient treatment. Although MCT1 inhibitors such as AZD3965 has been entering clinical trials for several types of advanced cancer (NCT01791595), selective MCT4 inhibitors are still in the discovery phase. We hope that development of MCT4 inhibitors in the future will offer a new approach to cancer therapy.

High MCT4 expression is an independent predictive marker for worse outcomes in NSCLC.

Reporting Checklist: The authors have completed the REMARK reporting checklist. Available at http://dx.doi.org/10.21037/tcr-20-3117

Conflicts of Interest: All authors have completed the ICMJE uniform disclosure form (available at http://dx.doi.org/10.21037/tcr-20-3117). The authors have no conflicts of interest to declare.

Ethical Statement: The authors are accountable for all aspects of the work in ensuring that questions related to the accuracy or integrity of any part of the work are appropriately investigated and resolved. The study was conducted in accordance with the Declaration of Helsinki (as revised in 2013). The study was approved by The Ethics Committee of Zhejiang Cancer Hospital (IRB-2019-41) and individual consent for this retrospective analysis were waived.