Glioblastoma multiforme (GBM) is the most malignant and invasive central nervous system tumor, and its incidence accounts for about 69% of gliomas (1). The current treatment of GBM is to surgically remove the tumor lesion to the maximum extent combined with chemo- and radiation therapy. However, while the median survival time of low-grade gliomas in China is 78.1 months, for GBM this is only 14.4 months (2). The prognosis for GBM patients is not optimistic, and there is an urgent need for research on targeted therapies to treat this disease.

Primary GBM is usually divided into four types according to the genetic changes involved. These are, a neuron type, pre-neuronal type, classic type and interstitial type (3). With the continuous development of biological technology, especially the application of high-throughput sequencing and genome sequencing, it has become possible to evaluate the genetic and epigenetic changes of various types of tumors at the genome-wide level. Cell and molecular genetics related studies have confirmed that there are a large number of chromosomal abnormalities and gene mutations in GBM (4). However, in addition to genetic changes, epigenetic changes may also be involved in the development and evolution of each subtype (5). As one of the important mechanisms of epigenetic regulation, DNA methylation plays an important role in the occurrence and evolution of GBM (6).

Research shows that the infiltration of immune cells in tumors is closely related to clinical outcomes. Immune cells infiltrated in tumors are most likely to serve as drug targets to improve patient survival (7) as they can be isolated after migrating from blood to tissue (8). However, it is difficult to analyze tumor prognosis with gene methylation combined with tumor immune infiltration, and few studies have reported it.

Fortunately, with the development of bioinformatics, gene methylation chip data has gradually become a powerful tool to study tumor targeted therapy (9). The Illumina Human Methylation 450K BeadChip can detect nearly 450,000 methylation sites in the human genome with single-base resolution. This technology completely covers 96% of CpG islands, in addition to CpG sites other than CpG islands, the non-CpG methylation sites of human stem cells, and the differential methylation sites of normal tissues and tumor (multiple cancers) tissues, encoding as required. The sites of CpG island, miRNA promoter region and GWAS disease-related regions outside the region also cover 90% of the sites of the Human Methylation 27 BeadChip (10). Moreover, EpiDISH is an R software package used to infer the proportion of a priori known cell subtypes present in a mixture of cell types. The package contains references for eight cell subtypes (B cells, CD4T cells, CD8T cells, NK cells, monocytes, neutrophils, eosinophils, and granulocytes) (11) and provides a function that allows the identification of differentially methylated cell-types and their directionality of change in Epigenome-Wide Association Studies. Importantly, EpiDISH can be used directly on 450k DNA array and EPIC array data (12); therefore methylation chip data can also be used for tumor immune infiltration pattern analysis.

In this study, we obtained the data of the 450k BeadChip methylation chip in the GEO database and that of immune cell infiltration through the EpiDISH software package transformation. The proportion, correlation and differential expression of related immune cells was then analyzed, and its prognostic significance for GBM clarified. We contend the results of this study will lay the foundation for the development of targeted therapy for this aggressive malignancy.

The gene methylation chip data of GBM with survival data were downloaded from the GEO database with RTGCA toolkit R (version 3.5.1). The samples were divided into two groups: long-term survival (SNU-LTS: GSM3143643-GSM3143663) and short-term survival (SNU-STS: GSM3143664-GSM3143675) based of patient survival. The related data were downloaded, sorted, and annotated. We then used glioma data and the ID conversion of relevant GEO data to convert methylation sites to gene sites. Using edge R for differential analysis, the corrected expression and gene differential expression were obtained, and the Heatmap file was used to draw a heat map. Limma was used to correct the expression of samples. The corrected expression file was used for the software transformation of immune cells. EpiDISH was used to translate the expression amount of methylation data, so that the expression amount was transformed into the expression matrix of immune cells. The study was conducted in accordance with the Declaration of Helsinki (as revised in 2013).

SPSS software 22.0 (IBM Corporation, Armonk, NY, USA) was used for data analysis. All statistical tests were bilateral, and a p value less than 0.05 had statistical significance. When the continuous variable conformed to normal distribution, the independent sample t-test was used for comparison, and when the continuous variable deviated from the normal distribution, the U-test was used for comparison. Pearson correlation analysis and Spearman correlation analysis were then used.

There were 21 samples in the SNU-LTS group and 12 in the SNU-STS group. The difference analysis was carried out by edger package and the corrected expression amount and gene differential expression were obtained. The behavior gene name was listed as the sample name and the Heatmap file used to draw the heat map (Figure 1). The results showed that 73 genes (DKFZP434H168, INTS4L1, MIR524, etc.) in the two groups were different, and the difference was statistically significant. 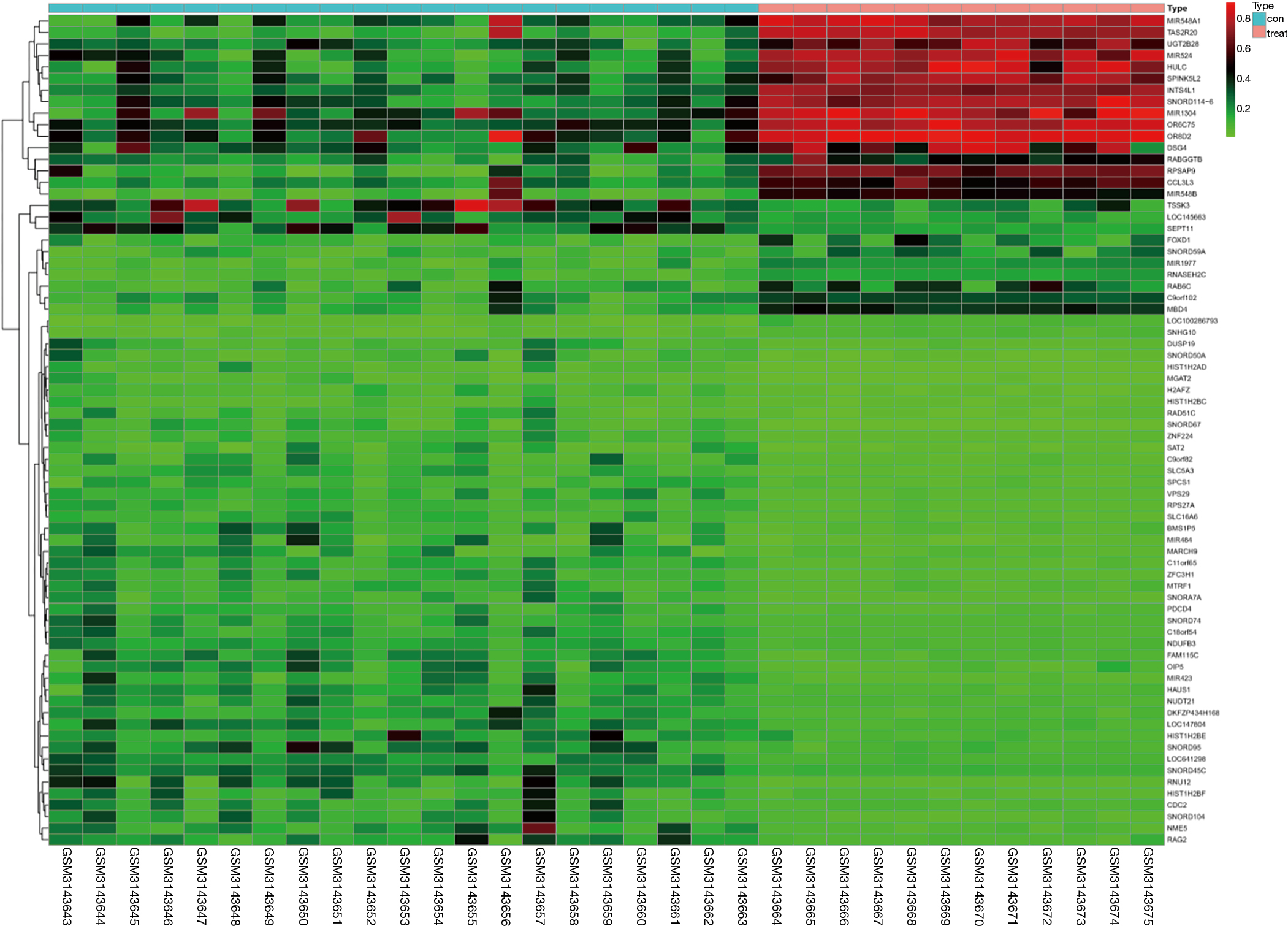 The landscape of immune inﬁltration 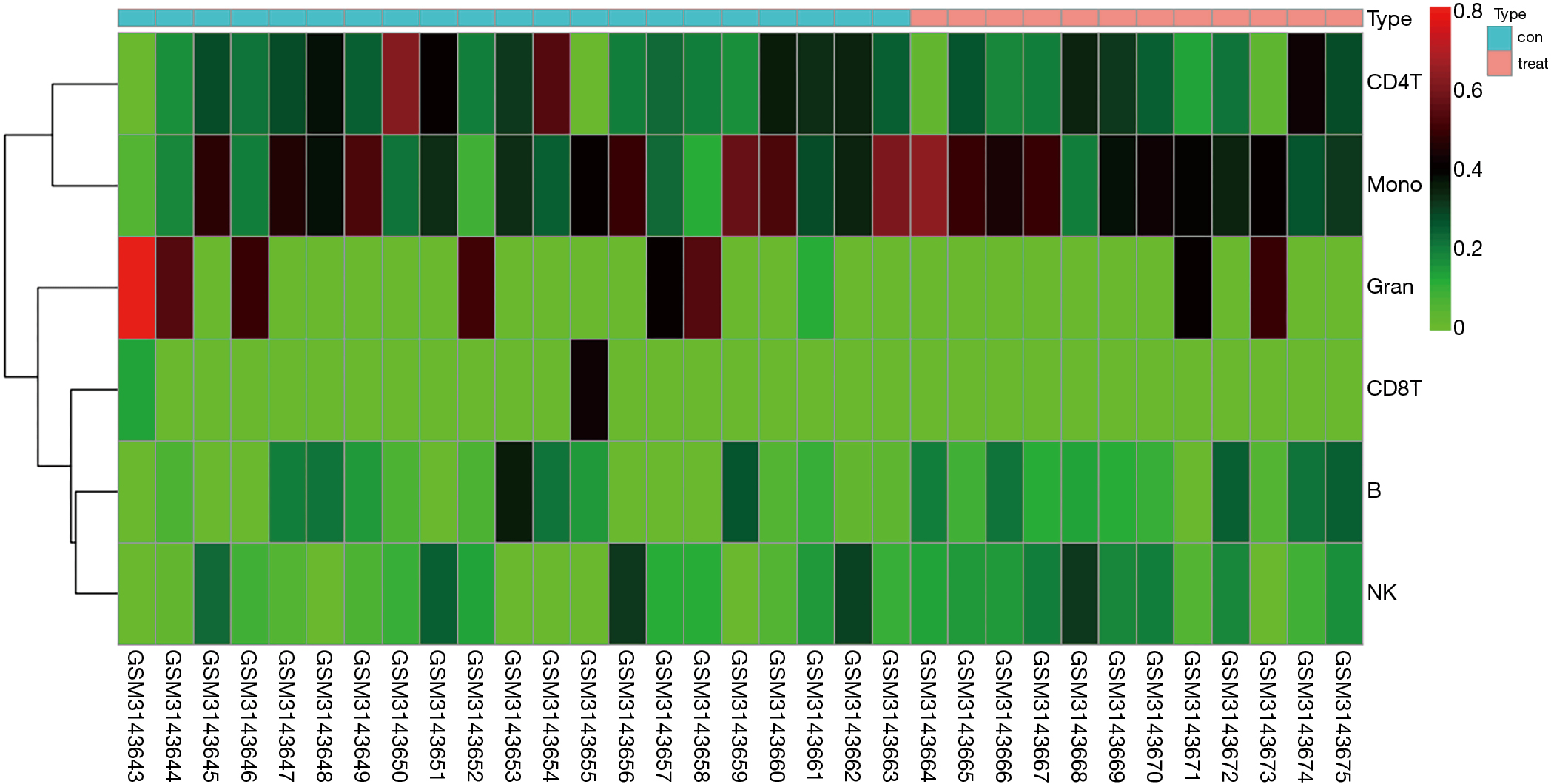 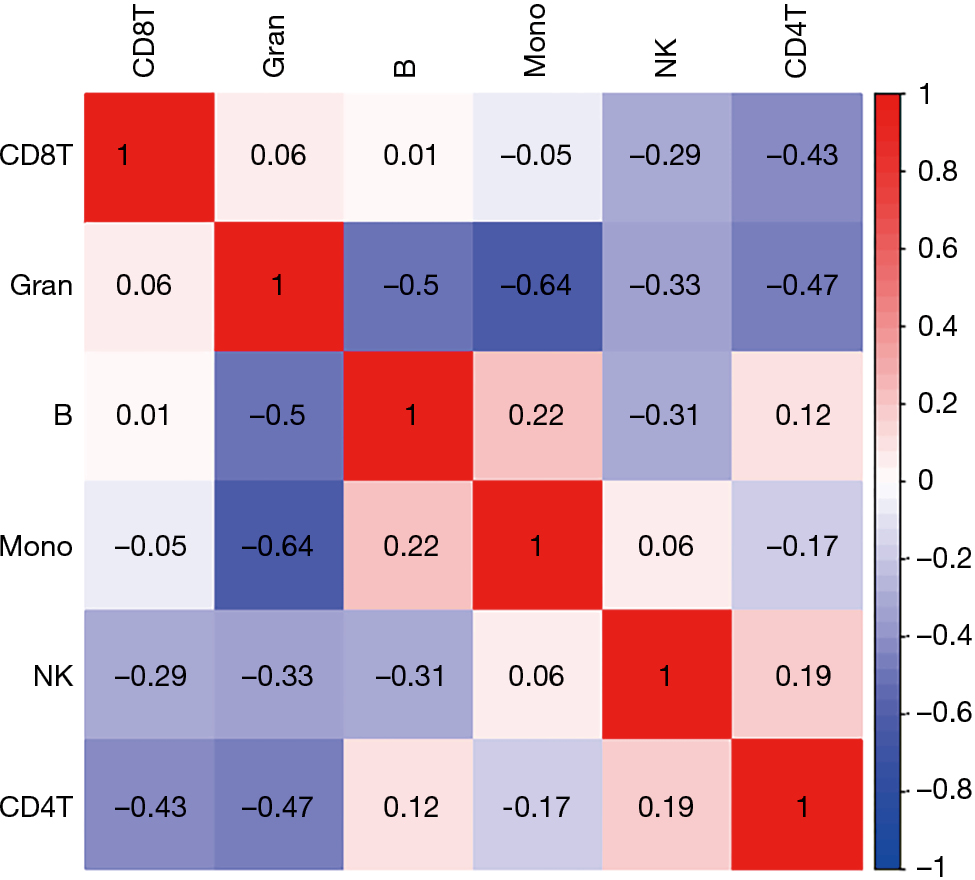 The different infiltrates of six immune cells in the SNU-LTS and SNU-STS groups were compared. The results show that there is no significant difference in the infiltration degree between the two groups (P>0.05, Figure 5). The results of principal component analysis (PCA) show that while there are individual differences between the SNU-LTS and SNU-STS groups, there is also a certain degree of consistency, suggesting PCA analysis had no obvious significance (Figure 6). 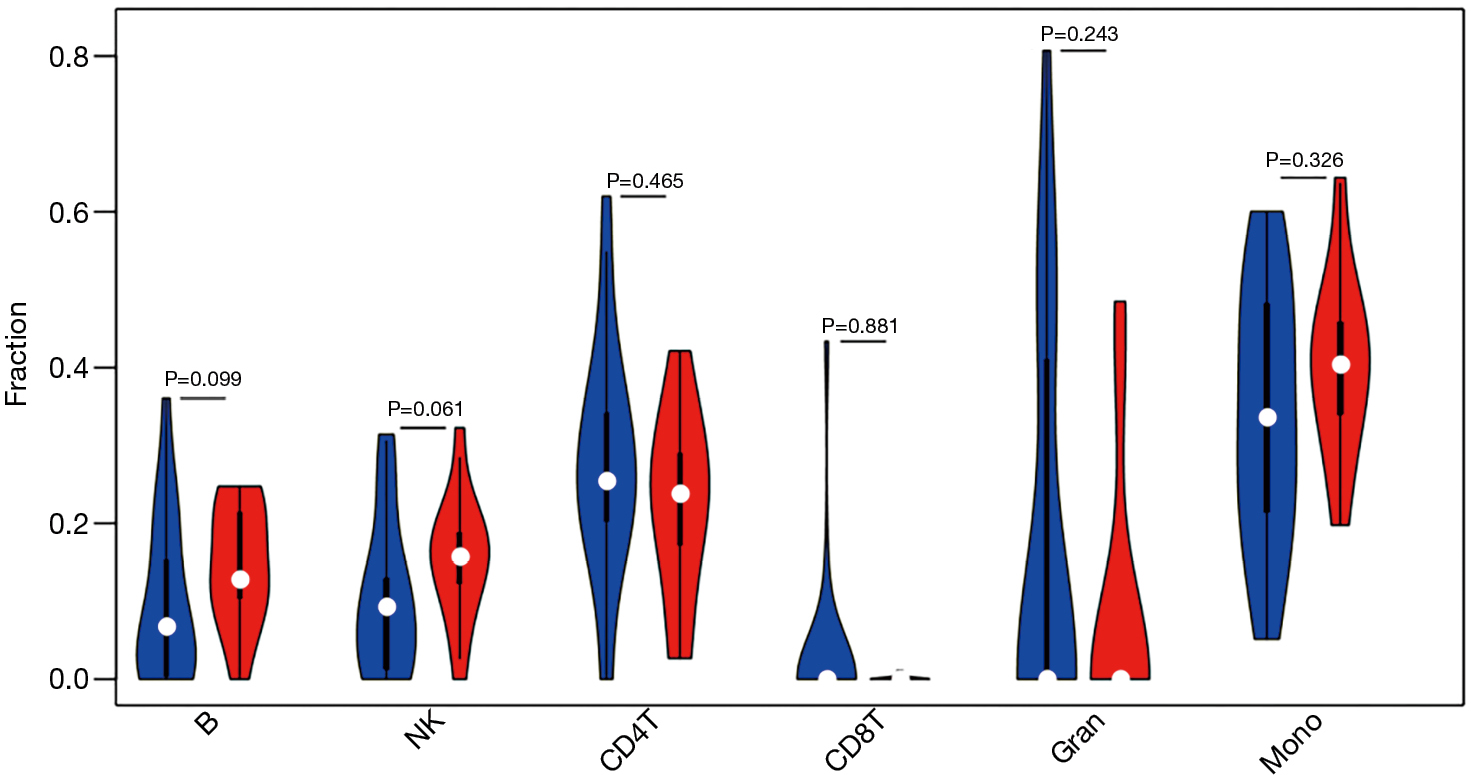 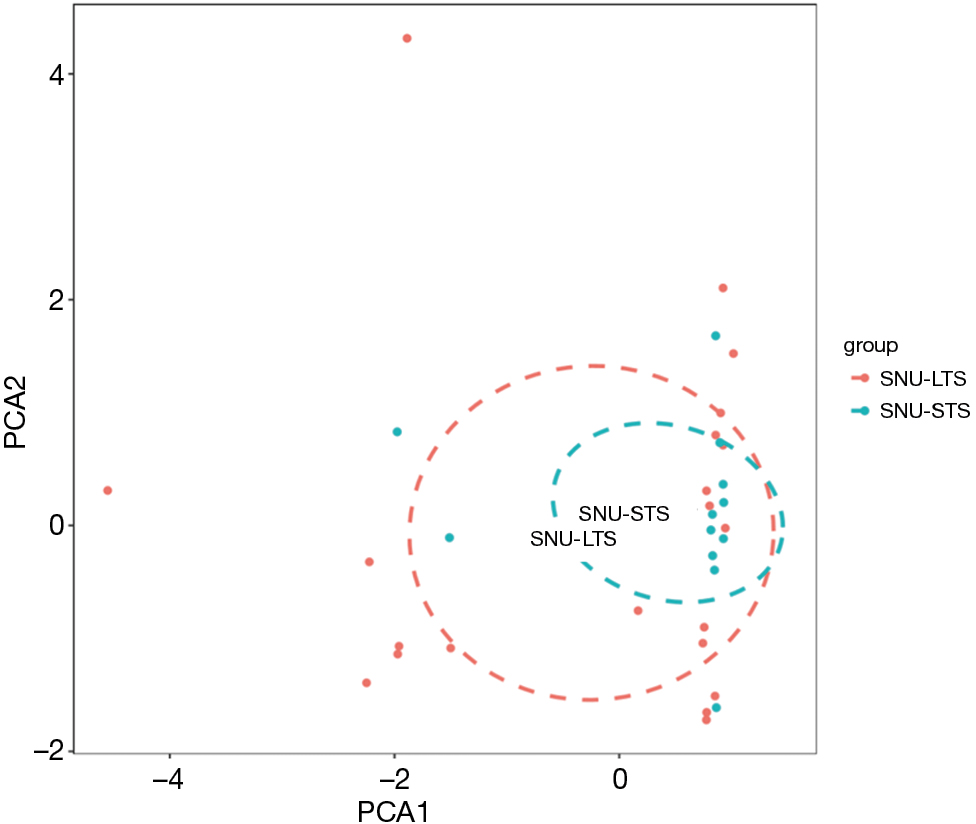 The importance of DNA methylation in the occurrence and development of GBM continues to be of interest to researchers. Epigenetic regulation has the characteristics of complexity, variability, and space-time specificity, which makes the study of epigenetic regulation very difficult (13). At present, most research on DNA methylation is limited to the use of drug treatment or knockout of DNA methyltransferase so that the effect of gene changes on downstream targets can be observed. However, the epigenetic changes of GBM are across a wide range, and such research often has little effect on its treatment. Finding a correlation between the regulatory epigenetic changes and other tumor pathogeneses to indirectly affect the overall epigenetic changes of GBM will have a profound impact on its treatment. In addition, it is difficult to analyze the whole genome methylation group in a large number of GBM patients and the procedure is expensive (14). Therefore, it is important to reduce the cost of detection or find a substitute detection method. Developments in gene editing methods and human genome information mining suggest there is a close relationship between methylation and immune cell infiltration, and the study of their correlation is an important topic for future research (4). We obtained the data of the 450k BeadChip methylation chip in the GEO database and that of immune cell infiltration through the EpiDISH software package transformation. The proportion, correlation and differential expression of related immune cells was then analyzed, which is of great significance in determining the prognosis of GBM.

We explored the differences in methylation gene expression among 33 GBM patients with different life cycles, and then acquired the proportion, difference, and correlation of tumor immune infiltrating cells through data conversion. Statistical analysis of the methylation chip data showed 73 genes with significant differences in expression among patients with different life cycles, and individual gene methylation showed considerable differences. Whilst methylation genes were up regulated to some extent, some genes were down regulated. Following this, we determined the proportion of immune cells infiltrated by tumor tissue. Mono cells were found to be infiltrated more commonly in tumor tissue than CD8T and Gran cells, and the individual differences were large. There was no significant difference between the two groups, indicating that correlation between the survival cycle and the infiltration of immune cells was not high.

Exploration of the correlation between DNA methylation and tumor infiltrating immune cells is in its infancy, and many factors have not been taken into account, such as the age of patients, the course and stage of the disease, and the treatment received. The sample size obtained in this study is small, and it is difficult to obtain a clear correlation trend. More research is required to verify these results.

Conflicts of Interest: All authors have completed the ICMJE uniform disclosure form (available at http://dx.doi.org/10.21037/tcr-21-74). The authors have no conflicts of interest to declare.