Lung cancer is the most common malignant tumor with high morbidity and mortality worldwide (1,2). Lung adenocarcinoma is the most frequent pathological type of non-small cell lung cancer (NSCLC) and carries a poor prognosis (3). Epidermal growth factor receptor (EGFR) is a glycoprotein belonging to the ErbB family and has been shown to play an important role in tumorigenesis (4,5). EGFR mutations are mainly found in patients with lung adenocarcinoma and several clinical trials (6-8) have confirmed that the application of EGFR tyrosine kinase inhibitors (TKIs) improves the prognosis of patients with positive EGFR mutations. Thus, EGFR-TKIs have been approved as a first-line therapeutic method for metastatic NSCLC with EGFR mutation (9). The advent of novel targeted therapies provides options for treatment strategies. However, there are few studies on the relationship between overall survival (OS) and the status of EGFR outside clinical trials. Therefore, 291 lung adenocarcinomas with known exact status of EGFR were retrospectively analyzed. The relationship between the status of EGFR and general clinical characteristics was explored in de novo lung adenocarcinoma and further investigation on the outcomes and the status of EGFR was also performed.

We present the following article in accordance with the REMARK reporting checklist (available at http://dx.doi.org/10.21037/tcr-21-402).

The clinical details of 291 patients with primary lung adenocarcinoma diagnosed between January 2011 and December 2013 at the Shanxi Cancer Hospital were collected. The study was approved by the Ethics Committee of the Shanxi Cancer Hospital (ethical ID: 201835). All procedures performed in studies involving human participants followed the ethical standards of the institutional research committee of Shanxi Cancer hospital (Ethical ID: 201835) and the Helsinki declaration (as revised in 2013). Formal consent was not required for this retrospective study and the study did not involve animal experiments.

All patients were diagnosed as primary lung adenocarcinoma by either cytopathology or histopathology and EGFR status was confirmed. Patients with an unknown EGFR status or with mixed pathological types were excluded. Follow-up was provided by the Medical Records Department of our hospital. All cases were divided into a mutant-type group and wild-type group according to their EGFR status and the definition of metastatic status and TNM stage were based on the IASLC 8th TNM Lung Cancer Staging System. Initially, 337 cases were identified, and of these, 291 patients were ultimately selected. In addition, 396 individuals were excluded for the following reasons: (I) 23 patients had been treated before their EGFR status was determined; (II) 12 cases had a history of another malignancy or mixed pathological types; (II) three cases had incomplete laboratory data; and (IV) eight individuals had incomplete follow-up data.

DNA extraction procedures of tissue specimens were performed as follows. Paraffin-embedded wax blocks were cut into four slices with 7 µm thickness, then after dewaxing, benzol removal, and dyeing, the slices were placed into an Eppendorf tube. DNA was extracted according to the experimental steps of the QIAamp DNA FFPE Kit (Qiagen Company, Germany), then the concentration of DNA was adjusted to 20–30 ng/µL and stored at –20 °C to reserve.

The DNA extraction procedures of cytological specimens were as follows: Samples of lung adenocarcinoma patients scraped cancer cells were placed into an Eppendorf tube, and the number of cancer cells was not less than 200. DNA was extracted according to the instructions of the DNA extraction kit (Xiamen amoydx Technology Co., Ltd.) and stored at –20 °C to reserve.

The primers for polymerase chain reaction (PCR) amplification and sequencing were designed by AstraZeneca (Shanghai R&D Center) and synthesized by the Shanghai Biological Company. Mutations in exons 18–21 of the EGFR gene were detected by amplification refractory mutation system (ARMs) and all experimental steps were completed according to the instructions of the ADx -EGFR detection kit.

Basic information between the two groups

General information regarding the two groups is summarized in Table 1. Among involved patients, 124 had the EGFR mutation, 167 had wild-type EGFRe, and the mutation rate was 42.6% (124/291). The gender ratio was 146 males and 145 females, the median age was 58 years old, 121 cases were smokers, and 170 cases were non-smokers. Distant metastases at the initial diagnosis were present in 147 cases, 95 cases underwent surgical resection at the initial treatment, and 11 cases underwent initial treatment after neoadjuvant chemotherapy. Radiotherapy and chemotherapy were provided in 133 cases, 13 cases used TKIs, and 39 cases received best supportive treatment. The 1-, 2-, 3-, and 5-year survival rates were 75.9%, 56.3%, 41.9%, and 14.8%, respectively, and 42, 35, 67, and 147 cases had stage I, stage II, stage III and stage IV, respectively. KRAS was detected in 93 patients, including nine mutations and 84 non-mutations. 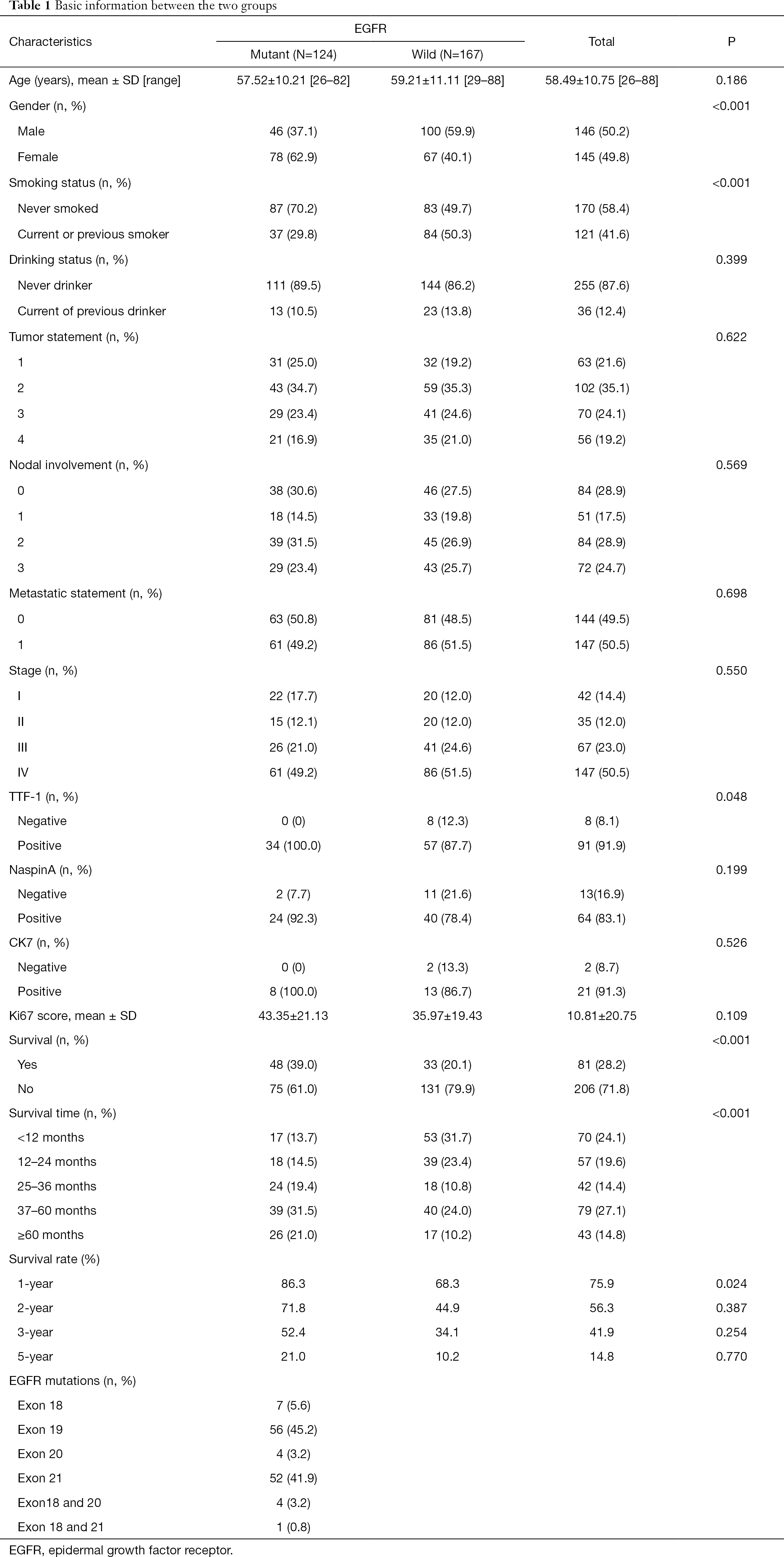 The subtypes of EGFR mutations

OS between the two groups 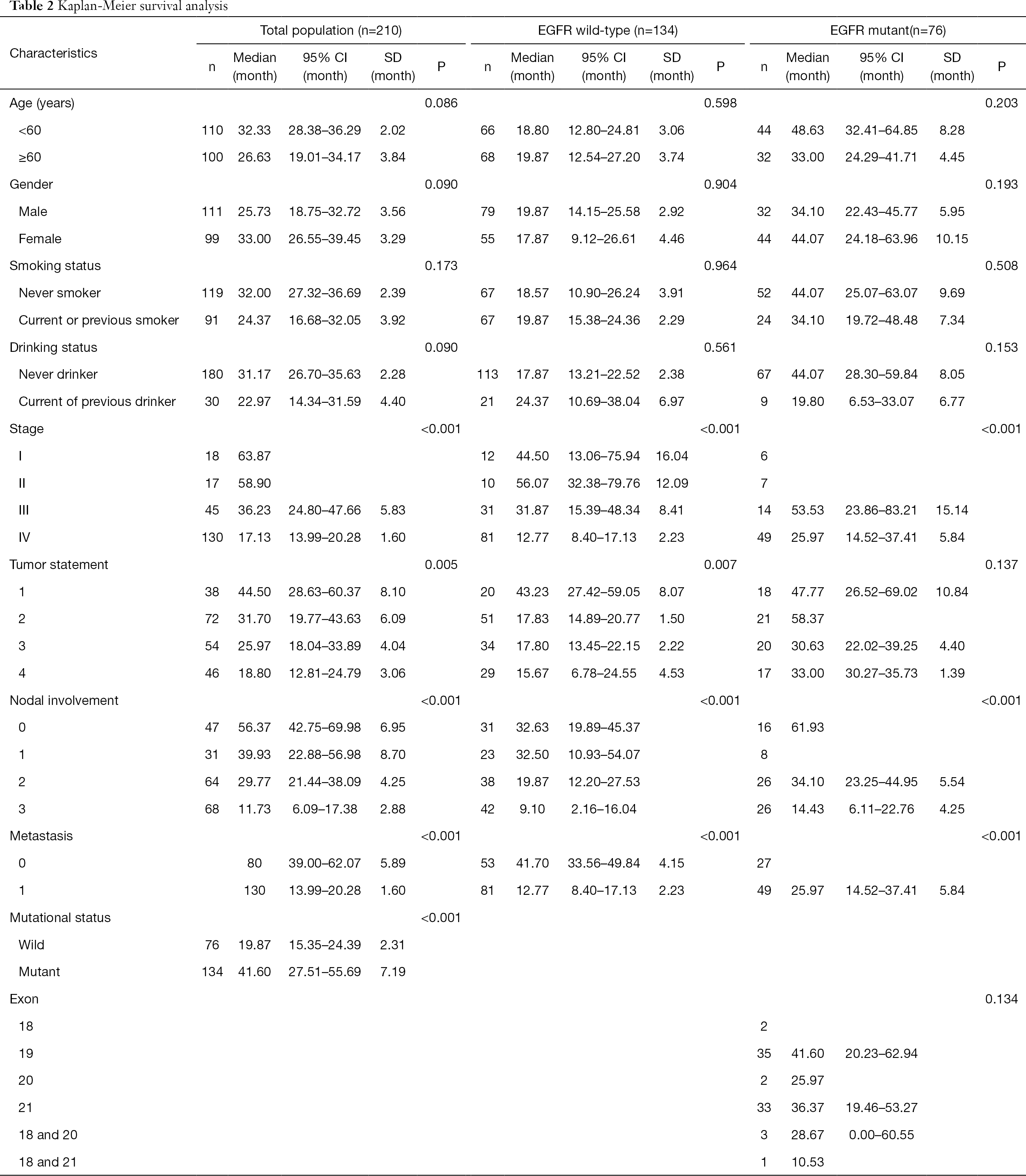 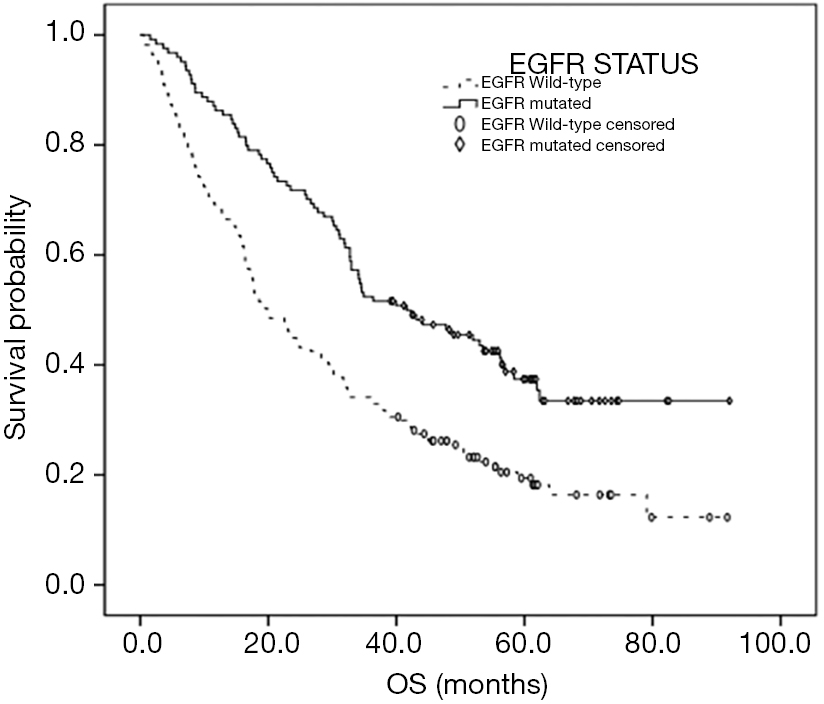 NSCLC is prone to be diagnosed in its advanced stages when the prognosis is poor (10). EGFR belongs to the ErbB family which has tyrosine kinase activity, and its abnormal function can lead to unusual cell proliferation, adhesion, and migration variation, which promotes the invasion and metastasis of cancer cells (11). Some studies showed EGFR mutation was more likely to respond to EGFR-TKIs in lung adenocarcinomas patients and led to longer progression-free survival (PFS) (12,13). In the present study, we observed the relationship between the status of EGFR and outcomes in lung adenocarcinomas. The rate of EGFR mutations has varied in previous studies and a higher rate has been found in Asians, females, and non-smokers (14), while in Europe, the rate of EGFR mutations was only 16.6% in Spain (7) and 4.9% in Germany (15).

Studies analyzing lung adenocarcinoma patients in areas of Southeast Asia (14) showed that the mutation frequency of EGFR varied from region to region. The mutant rate of the EGFR gene in China was 50.2%, and the mutant rate in females (61.1%) was higher than that of males (44.0%), while age had no effect on the mutation of EGFR. The results of our study support these findings.

EGFR mutations are most common in lung adenocarcinomas and are associated with particular clinical features. Some researchers have analyzed the relationship between EGFR mutation and clinical and pathological features (16) and showed higher mutant rates were found in Asians, females, and non-smokers (17), which is consistent with our study. We retrospectively analyzed 291 lung adenocarcinomas with exact status of EGFR and the results showed that the mutant rate was 42.6%, and OS of mutant-type patients was better than that of wild-type patients.

Some studies have found that exon 19 and exon 21 were more common in all EGFR mutations (18,19), which is consistent with our research. However, while there was no difference in OS between exon 19 mutations and exon 21 mutations after gefitinib treatment (20), other studies have shown opposing results. The OS in patients with exon 19 deletion mutation was better than that with exon 21 L858R mutation, and first-line treatment did not affect OS (21,22). In contrast, in the present study, there was no difference in OS with each subtype of EGFR mutations. Fewer deaths occurred in the mutant-type group and the different clinical treatments may have contributed to this. In the LUX-Lung6 clinical trial (23), OS in a mutant-type group was 9 months longer than that in a wild-type group. However, in a cross-sectional study of phase IV lung adenocarcinoma patients using second-generation sequencing (22), the OS of wild-type patients was better than that of mutant-type patients. In our study, the OS of both wild-type and mutant-type patients was slightly higher than that reported in clinical trials, although this disparity may be due to a loss of follow-up following premature death.

In addition, some studies (24) have revealed that the response to chemotherapy was better in EGFR mutant-type patients than that of wild-type patients, which may also lead to longer survivals. Some studies (25) demonstrated that there was no survival difference between EGFR mutations treated with TKIs and those which were not. However, patients with mutant-type usually choose surgery or radiotherapy and chemotherapy as first-line treatment, and if these treatments fail or the disease progresses, EGFR-TKIs treatment can be used to prolong the OS of these patients. At the same time, with the wide application of TKIs and immunotherapy, there are more choices for a therapeutic strategy. Finally, the economic status and desire for treatment of patient’s is also related to OS. Although most EGFR mutations occurred in non-smoking women with lung adenocarcinoma, there was still no difference in OS. In this study, N stage, M stage, clinical staging, and EGFR mutation were the risk factors of OS in lung adenocarcinomas.

There are some limitations to our study. Firstly, the nature of retrospective studies causes selection bias. In addition, specific treatment methods and other gene mutations were not included in this study. Finally, because of the heterogeneity of malignancy, multi-center studies using larger cohorts are required to confirm the results.

Funding: This work was supported by the health commission of Shanxi Province (2020058).

Reporting Checklist: The authors have completed the REMARK reporting checklist. Available at http://dx.doi.org/10.21037/tcr-21-402

Conflicts of Interest: All authors have completed the ICMJE uniform disclosure form (available at http://dx.doi.org/10.21037/tcr-21-402). The authors have no conflicts of interest to declare.

Ethical Statement: The authors are accountable for all aspects of the work in ensuring that questions related to the accuracy or integrity of any part of the work are appropriately investigated and resolved. The study was approved by the Ethics Committee of the Shanxi Cancer Hospital (ethical ID: 201835). All procedures performed in studies involving human participants followed the ethical standards of the institutional research committee of Shanxi Cancer hospital (Ethical ID: 201835) and the Helsinki declaration (as revised in 2013). Formal consent was not required for this retrospective study and the study did not involve animal experiments.