Laparoscopy-assisted distal gastrectomy (LADG) is widely performed for gastric cancer in Eastern countries (1-4). Following LADG, reconstruction methods mainly include Billroth-I, Billroth-II and Roux-en-Y. There are merits and demerits to each of them. Billroth-I is simple and enables more physiological processing of food postoperatively. However, only when the remnant stomach is large enough can this procedure be safely performed. It is widely used in Japan and Korea, where tumors are usually detected at an early stage. In other parts of the world, gastric cancers are usually diagnosed at an advanced stage. Therefore, Billroth-II and Roux-en-Y, which enable wider stomach resection without increasing anastomotic tension, are more favored (5). Compared to Roux-en-Y, Billroth-II is simpler, requires only one anastomosis, and takes less time. However, Billroth-II has also been criticized for increased reflux gastritis, as well as afferent loop syndrome (6,7). Many surgeons tend to add a Braun anastomosis (a side-to-side anastomosis between afferent and efferent loops distal to the gastrojejunostomy site) to reduce postoperative complications (8,9). However, this approach inevitably increases the complexity of the operation, and some obese patients may need the surgical incision extended to complete the procedure.

In Billroth-II with Braun anastomosis, there are two separate anastomoses: a proximal gastrojejunal anastomosis and a distal jejunojejunal anastomosis. The latter reduces afferent loop syndrome and reflux gastritis by diverting a substantial amount of bile from the duodenum to the efferent limb. We hypothesized that these two anastomoses could be integrated as one procedure without compromising their functions. To achieve this aim, we developed a modified Billroth-II gastrojejunostomy technique, referred to as “pant-shaped anastomosis”, which can effectively reduce the incidence of reflux gastritis and prevent afferent loop syndrome.

This study describes the surgical method for this novel technique and analyzes the surgical outcomes. We present the following article in accordance with the STROBE reporting checklist (available at https://tcr.amegroups.com/article/view/10.21037/tcr-21-2220/rc).

Patients were followed up with regular outpatient visits at 1, 3, 6, 12, 18, and 24 months postoperatively, and gastroscopy was routinely performed at 12 and 24 months. The patients were specifically asked about diarrhea, early dumping, appetite, weight gain or loss, heartburn, and epigastric pain, as well as if they needed to take antiulcer or antireflux medications. The Visick score was used to evaluate these subjective surgical outcomes (10), as follows: Visick I, no symptoms (complete satisfaction); Visick II, infrequent or minor symptoms (patients with mild symptoms not requiring medical treatment); Visick III, significant symptoms (patients requiring medical treatment for their symptoms); and Visick IV, severe intractable symptoms (patients having severe symptoms despite drug treatment, therefore needing an operation). Postoperative reflux gastritis was evaluated by gastroscopic images and defined as superficial gastritis exhibiting findings such as redness, edema and bleeding tendency (11). The endoscopic severity of reflux gastritis was assessed in four grades as follows: grade 0, no redness; grade 1, mild redness around the anastomosed region; grade 2, comb-shaped marked redness in the greater curvature on the oral side of the anastomosed area; and grade 3, diffuse severe redness and marked edema.

After satisfactory induction of general anesthesia, the patient was placed in the supine position with legs slightly apart. Through a small infraumbilical incision, a 12-mm trocar was inserted, and pneumoperitoneum was achieved. A laparoscopic camera was then introduced. Two 5-mm assistant ports (lower and upper) were inserted on the right, and two 12-mm operator ports were inserted on the left under close surveillance. Following an inspection of the peritoneal cavity, distal gastrectomy was performed with lymphadenectomy according to the Japanese Gastric Cancer Treatment Guidelines (12). After mobilization of the stomach, the duodenum bulb was transected just below the pyloric ring intracorporeally using endoscopic linear staplers. Then, a 5-cm long midline incision was made in the upper abdomen, and the fully mobilized stomach was removed from the abdominal cavity. Subsequent digestive tract reconstruction was performed extracorporeally.

The jejunum was lifted in front of the transverse colon through the middle incision of the upper abdomen. A 1.0 cm longitudinal incision was made on the antimesenteric border of the proximal jejunum, 25–30 cm distal to the ligament of Treitz (Figure 1A). The two arms of a 60 mm linear stapler with white cartilage were inserted into the afferent loop and efferent loop. By firing the stapler, a side-to-side enteroenteric anastomosis between the loops was created (Figure 1B). Then, the anvil head of a 29-mm circular stapler was inserted into the common opening of the afferent-efferent loops (Figure 1C). Then, an incision was made on the anterior wall of the stomach, and a 29-mm circular stapler gun was inserted. Next, the anvil was docked onto the end of the stapler gun, and the posterior wall of the remnant stomach was anastomosed to the common opening of the afferent-efferent loop (Figure 1D). Finally, the gastric stump was closed with linear staplers (Figures 1E,2). 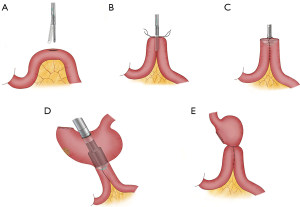 Figure 1 Schematic diagram of the steps of the pant-shaped anastomosis. (A) A small incision was made on the antimesenteric edge of the proximal jejunum; (B) two arms of a linear stapler were inserted into the afferent and efferent portions of the jejunum; (C) a circular stapler anvil was inserted into the common opening of the loops; (D) gastrojejunostomy was performed; (E) the gastric stump was closed. 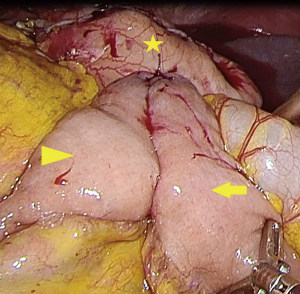 Continuous variables with a normal distribution are expressed as the mean ± standard deviation; otherwise, they are presented as the median (interquartile range). Count data are expressed as cases/percentages (n/%). SPSS 20.0 was used for data processing and statistical analysis.

Table 3 shows the postoperative complications, postoperative symptoms and endoscopic findings in patients who underwent LADG with pant-shaped anastomosis. One patient developed duodenal stump leakage on the 5th day after the operation, and no patients developed extraluminal bleeding, intraluminal bleeding, anastomosis leakage, afferent obstruction, internal herniation or pancreatitis. Postoperative symptoms were collected in 79 patients. Among them, 60 patients had no symptoms, and 55 patients gained weight. There were 9, 3, 3, 2, and 3 cases of diarrhea, early dumping, appetite loss, heartburn, and epigastric pain, respectively. Visick scores for grades I, II, and III were 75.9%, 14.0%, and 10.1%, respectively. Regarding the severity of reflux gastritis, 6.1% (4/66) had endoscopic grade 0, 56.1% (37/66) had grade 1, 21.2% (14/66) had grade 2, and 16.7% (11/66) had grade 3.

In contrast to that in Japan and South Korea, the proportion of advanced gastric cancer in China is still high (13). Billroth-II and Roux-en-Y procedures are more popular for distal gastric cancer, as the stomach can be resected sufficiently without increasing anastomotic tension (14). However, both methods have drawbacks. Billroth-II yields a higher incidence of bile reflux and gastritis (15). In addition, afferent loop syndrome, originating from mechanical obstruction at the anastomosis itself or a point near the anastomosis, is sometimes found, especially in antecolic Billroth-II reconstruction (7). Roux-en-Y can prevent alkaline reflux gastritis, but it is more complicated, and Roux leg stasis and internal hernia are possible complications (16,17).

In our department, we prefer Billroth-II with Braun anastomosis for LADG. However, sometimes this is still not easy to perform since the incision of laparoscopic surgery is relatively small. If a patient has obesity or a short mesentery, the incision usually needs to be extended before Braun anastomoses can be performed. To some extent, this is contrary to the original intention of minimally invasive laparoscopic surgery.

Through preliminary clinical practice involving 96 patients, we found that pant anastomosis is indeed safe and easy to perform. The mean total operative time was 155.8 min, with an average of 22 min required for digestive tract reconstruction. The mean incision length was 5.3 cm. Our follow-up results showed that there were no cases of extraluminal bleeding, intraluminal bleeding, anastomotic leakage, afferent obstruction, internal herniation or pancreatitis. Only one patient developed duodenal stump leakage on the 5th day after the operation, so the rate of pant-shaped anastomosis-related severe complications was 1.5% (1/66). The Visick score showed that the proportion of patients who felt significant reflux was not high (Visick III–IV 10.1%). This result is similar to that previously reported for Roux-en-Y (21). In total, 62.6% of patients exhibited endoscopic reflux gastritis of grade 1 or less, and this percentage was higher than that for Billroth-I or Billroth-II (11).

Our study has several limitations. First, it was a retrospective single-center single-arm study. Second, anastomosis-related complications, such as bleeding, leakage, and afferent obstruction, are rare; therefore, the number of patients included in this study was not large enough to properly evaluate the incidence of complications. Additionally, some postoperative complications may occur 3–5 or even 10 years after the operation, indicating that our follow-up time was comparatively short. Therefore, more high-quality prospective large-sample controlled studies and long-term follow-up are needed to confirm the effect of pant-shaped anastomosis. However, despite these limitations, our study offers a new idea for gastrointestinal reconstruction and the preliminary experience of our team.

In conclusion, pant-shaped anastomosis is a safe and simple procedure. It is a feasible option to reduce afferent obstruction after LADG in patients with distal gastric cancer.

Funding: This study was supported by grants from the Research Projects of Anhui Health Committee (AHWJ2021b109) and the “Peak” Training Program for Scientific Research of Yijishan Hospital, Wannan Medical College (KPF 2019017).

Reporting Checklist: The authors have completed the STROBE reporting checklist. Available at https://tcr.amegroups.com/article/view/10.21037/tcr-21-2220/rc

Conflicts of Interest: All authors have completed the ICMJE uniform disclosure form (available at https://tcr.amegroups.com/article/view/10.21037/tcr-21-2220/coif). The authors have no conflicts of interest to declare.

Ethical Statement: The authors are accountable for all aspects of the work in ensuring that questions related to the accuracy or integrity of any part of the work are appropriately investigated and resolved. The study was conducted in accordance with the Declaration of Helsinki (as revised in 2013). The study was approved by the Medical Ethics Committee of Yijishan Hospital of Wannan Medical College (No. YJSYY20180502) and individual consent for this retrospective analysis was waived.