Liver cancers are estimated to rank the sixth among newly diagnosed cancers and the fourth cause of cancer-related death in the world with over 8.4 million new cases and 7.8 million deaths annually (1). Hepatocellular carcinoma (HCC) accounts for the most common type of primary liver cancers which is most caused by hepatitis B or C virus (HBV or HCV) infection or alcohol abuse, with poor prognosis due to the lack of specific symptoms at the early stage (2). Therefore, Asian-Pacific Association for the Study of the Liver (APASL) guidelines recommended using ultrasonography (US) and serum alpha-fetoprotein (AFP) tests for early diagnosis of individuals with the above liver diseases (3).

AFP is the most widely used biomarker for HCC, even though it has been reported that up to 20% of HCC patients’ tumor cells do not secrete AFP proteins (4). A previous study reported that a cutoff value of AFP of 90.0 ng/mL had a sensitivity of 0.609, and specificity of 0.818 for diagnosing HCC in 121 enrolled patients, and the receiver operating characteristic (ROC) curve of AFP for diagnosis of HCC was 0.746 (95% CI: 0.674–0.818) (5). Serum AFP level can indirectly reflect the ability of tumor cells to synthesize and process AFP protein. Combined with imaging techniques, variation tendency of serum AFP plays a critical role in surveillance of individuals with HCC risks and diagnosis of HCC. More importantly, AFP has been widely accepted as a prognostic predictor for HCC in recent researches.

A retrospective study reported that preoperative serum AFP level greater than 100 ng/mL was associated with a higher rate of recurrence of HCC after hepatectomy (6). According to the results of the above study, preoperative serum AFP level can help surgeon to make a comprehensive treatment schedule based on surgery. Moreover, tissue AFP staining status of specimens obtained by liver biopsy is useful in the histologic early diagnosis of HCC (7). The expression level of AFP protein in tumor tissue was significantly higher than that in normal tissue, but the expression level of AFP in carcinoma and para-carcinoma tissue showed no significant difference in the same patients (8). AFP protein expression rate in HCC is 25% to 50%, and the positive AFP status is negatively correlated with tumor histological grade (9,10). However, serum AFP level is negative in 20% HCC patients clinically, but those patients’ tissue AFP status may be positive or negative. Therefore, the clinical association among serum AFP level and tissue AFP status is not clear.

Here, we conducted a retrospective study of patients with HCC to investigate the relationship between preoperative serum AFP concentration and tissue AFP status and to identify the prognostic value of serum and tissue AFP. We present the following article in accordance with the STROBE reporting checklist (available at https://tcr.amegroups.com/article/view/10.21037/tcr-21-2334/rc).

The study was conducted in accordance with the Declaration of Helsinki (as revised in 2013). This study was approved by Ethics Committee of National Cancer Center/Cancer Hospital, Chinese Academy of Medical Sciences and Peking Union Medical College (No. 19-010/1795), and written informed consents were obtained from all the patients during the hospital stay. Patients with primary HCC who had been treated with surgical resection by the same single-surgeon team at our institution between January 2012 and December 2018 were identified. Inclusion criteria were: (I) patients who underwent hepatectomy; (II) pathological diagnosis was HCC; (III) postoperative survival more than 1 month. Exclusion criteria were: (I) a history of prior cancer surgery; (II) combined with other local therapy during surgery; (III) extrahepatic metastases detected during surgery; (IV) had missing data that made it impossible to evaluated. Clinical data collected from eligible patients included the following: age, sex, HBV, HCV, tumor number, tumor size, Barcelona clinic liver cancer (BCLC) stage, histological grade, preoperative serum AFP level and postoperative tissue AFP status. Overall survival (OS) was defined as the time from the end of surgery to the death of any cause. The rules of follow-up were described in our previous report in detail (11) and the treatment after recurrence including surgery, radiofrequency ablation, transhepatic arterial chemotherapy and embolization (TACE), radiation and systemic therapy.

Preoperative serum AFP concentrations were measured by electrochemiluminescence immunoassay (ECLI) with a normal range of 0–7 ng/mL (the reference range of ECLI kits) and AFP value could be collected from preoperative laboratory results. Postoperative tissue AFP status was measured by immunohistochemistry (IHC) that was performed using an indirect peroxidase method. The sections (5 µm) of cancer tissues were deparaffinized with xylene and rehydrated in citrate buffer. Next, the sections were incubated at 4 ℃ overnight with primary AFP antibodies (1:50 dilution; ZSGB-Bio, Beijing, China) raised in rabbit. After incubating with a secondary antibody, diaminobenzidine was used to develop the antigen‐antibody reactions. AFP protein is cytoplasmic staining and were scored 0–3 according to tumor specimens with AFP IHC staining intensity. The staining intensity of 2+ or more were judged as AFP-positive status, others were AFP-negative status. The IHC process was conducted at the Department of Pathology, Cancer Hospital, Chinese Academy of Medical Sciences. Tissue AFP expression was reviewed by experienced pathologists. 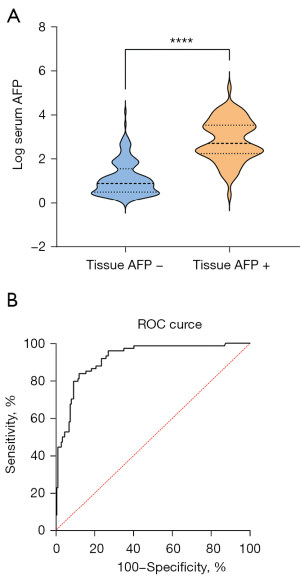 Correlations between serum or tissue AFP and clinicopathological variables

Correlations between serum or tissue AFP and clinicopathological variables

Additionally, the present study concluded that HCC patients with serum AFP ≥92.33 ng/mL had poorer OS. Investigators have reported that serum AFP level was associated with HCC patients’ prognosis. Among 852 patients, patients with high AFP (>10 ng/mL) levels had worse 3-year post-recurrence survival compared with individuals with low AFP (<10 ng/mL) levels. After adjusting for competing risk factors, patients with AFP >10 ng/mL at the time of recurrence were independently associated with almost twofold higher hazards of death in the post-recurrence setting (13).

Furthermore, our study showed that tissue AFP-positive status was associated with poorer OS. Zhu et al. reported that the expression of Oct4, Klf4, Sox2 and c-Myc was significantly higher in AFP-positive tissues compared to AFP-negative tissues due to these markers were closely related to hepatocarcinogenesis (19). Moreover, the expression levels of tissue AFP in metastatic HCCs were lower than that in those HCCs without metastases, but the expression level of tissue AFP showed no significant influence on survival time (8). Our results demonstrated that serum and tissue AFP were not independent factors of OS, but AFP play an important role in HCC progression. The variation trend of serum AFP can be used as an index to evaluate the efficacy for HCC after receiving treatment in previous studies. Serum and tissue AFP for prognosis was affected by other factors, more studies are needed. In a vitro experiment, overexpression of AFP could enhance proliferation, invasion, and migration of HCC cells. Both qPCR and western blot results demonstrated that the expressions of PD-L1, B7-H4, and P65 were significantly higher in the AFP transfection group compared to the controls (20). Further, high levels of acetylated AFP in HCC tissues were associated with HBV infection and correlated with poor prognosis and decreased patient survival, AFP acetylation plays an important role in HCC progression (21).

There are some limitations in the current studies. Firstly, the grouping process were exposed to selection bias due to retrospective study. Secondly, the cut-off value of serum AFP was influenced by different assay kit. Thirdly, a small number of patients were included because of the single-surgeon team, and further lager sample research is needed to clarify the diagnostic value of AFP.

In conclusion, this study showed that serum AFP level could be a highly predictive biomarker for tissue AFP status in patients with HCC. Furthermore, serum AFP levels ≥92.33 ng/mL and tissue AFP-positive status were associated with poorer OS but were not independent factors of OS.

Reporting Checklist: The authors have completed the STROBE reporting checklist. Available at https://tcr.amegroups.com/article/view/10.21037/tcr-21-2334/rc

Conflicts of Interest: All authors have completed the ICMJE uniform disclosure form (available at https://tcr.amegroups.com/article/view/10.21037/tcr-21-2334/coif). The authors have no conflicts of interest to declare.

Ethical Statement: The authors are accountable for all aspects of the work in ensuring that questions related to the accuracy or integrity of any part of the work are appropriately investigated and resolved. The study was conducted in accordance with the Declaration of Helsinki (as revised in 2013). This study was approved by Ethics Committee of National Cancer Center/Cancer Hospital, Chinese Academy of Medical Sciences and Peking Union Medical College (No. 19-010/1795), and written informed consents were obtained from all the patients during the hospital stay.