A retrospective study based on SEER database: not all high-risk factors are equal for stage II colon cancer

In general, patients with stage II colon cancer have a favorable prognosis with 5-year OS rate above 80%. Most of these patients will never develop recurrences (8). During the long survival period, more factors other than tumor stage were involved in the development of the outcome. Thus, American Joint Committee on Cancer (AJCC) tumor-node-metastasis (TNM) cannot effectively predict the long-term survival rate of patients, underscoring the need to explore prognostic and predictive models to facilitate the identification of patients for additional intervention. Given increasing value of multiple variables, including tumor location, mucin-producing tumors, tumor deposition and marital status (MS), more HRFs have been noticed gradually. But, of note, very few studies have focused on the nomogram implementation. Therefore, our research is dedicated to identify more HRFs, quantify the degree of risk each HRF confers, assess the survival benefits that each HRF and its combinations can obtain from chemotherapy. And based on the identified HRFs, we attempt to establish an effective and stable predictive model. These results will hopefully provide systematic and effective guidance for clinical practice.

The study was conducted in accordance with the Declaration of Helsinki (as revised in 2013). The clinical variables of patients confirmed as stage II colon cancer between 2000 and 2018 were retrieved from the SEER database, a program stablished by NCI aiming for comprehensively national-level clinical investigation (10). Inclusion criteria were: (I) stage II colon cancer (site recode, international classification of diseases for oncology (ICD-O-3/WHO 2009); (II) diagnosis confirmed by pathological examination; (III) surgery performed in each case. Exclusion criteria were: (I) incomplete information on TNM stage and general information; (II) undergoing radiotherapy and other adjuvant treatments besides chemotherapy (Figure 1). 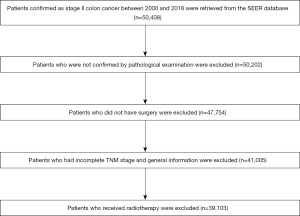 OS was the primary outcome in this study and was calculated as the time from surgery to death or last date of study follow-up. Data classifying receipt of chemotherapy were limited to yes versus no.

Univariate and multivariate Cox regression analysis were performed to identify independent risk factors affecting the OS, and after propensity score adjustment, death risk ratio of each HRF was calculated. Survival analysis was used to evaluate whether each HRF and its combinations could benefit from chemotherapy. Then, the HRFs identified were used to develop a nomogram model. The comparison between the nomogram prediction and observed outcomes was assessed by the concordance index (C-index). The calibration plot was used for visualized comparison between predicted and actual prognosis. Furthermore, the power of nomogram model was compared to AJCC TNM in both receiver operating characteristic curve (ROC) and decision curve analysis (DCA). All analysis was performed by R Studio software 1.4.1106 and IBM SPSS Statistics 24 software. All statistical tests in this study were two-sided, conducted at a significance level of five percent (a =0.05).

A total of 39,103 patients with stage II colon cancer, who had received surgery and were diagnosed pathologically during 2000 to 2018, were included in this study. Through univariate and multivariate COX regression analysis, T4 tumors, poorly/undifferentiated tumors, positive carcinoembryonic antigen (CEA), PNI, tumor deposition, LN examination less than 12, advanced age, unmarried status, mucin-producing tumors, and left tumors were identified as the independent risk factors associated with the OS of stage II colon cancer (Table 1). In our study, all independent risk factors were considered as HRFs. 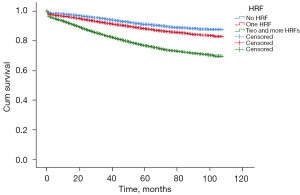 Figure 2 Kaplan-Meier of different amounts of HRF; a cumulative effect on OS: compared with patients with no HRFs, those with two or more HRFs and one HRF have a significant decrease in OS. HRF, high-risk factor; OS, overall survival.

Covariates-adjusted overall mortality HR based upon receipt of adjuvant chemotherapy

Establishment and validation of the nomogram

A nomogram model was developed by all the identified HRFs. Figure 3 showed the nomogram model of 1-, 3- and 5-year OS rate. The assessment was internally verified by 1,000 bootstraps, measured by C-index and calibration plots. Specifically, C-index of OS nomogram was 0.704 (95% CI: 0.698–0.716). Meanwhile, the calibration curve showed a high agreement between predictions and actual observations of OS nomogram (Figure 4A-4C). Then, to further compare the nomogram with AJCC TNM stage: in ROC, nomogram (AUC =0.738) in OS showed a larger area than AJCC TNM stage (AUC =0.714) (Figure 5A); in DCA, nomogram in OS showed superior power than AJCC TNM stage (Figure 5B). In summary, nomogram showed better predictive ability and stability compared with AJCC TNM stage. 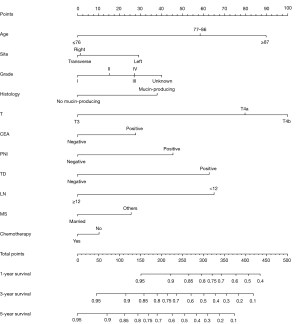 Figure 4 The calibration curve for predicting patient survival of (A) 1-, (B) 3- and (C) 5-year OS in the primary cohort after 1,000 bootstrap internal validation. OS, overall survival.

Several previous retrospective studies and randomized controlled trials have indicated that the OS of stage II colon cancer could not benefit from adjuvant chemotherapy (3-5). However, these studies only have analyzed OS or disease-free survival (DFS) generally, ignoring the effect of other treatments on OS, as well as the interactions and differences among the various subgroups of stage II colon cancer. Recently, some studies have found that stage II colon cancer with HRFs can benefit from adjuvant chemotherapy (6,7,11). However, knowledge of HRFs is relatively limited, and some newly discovered HRFs affecting OS, such as tumor location, mucin-producing tumors, tumor deposition, etc., have not been included. Meanwhile, most of these studies have not quantified the amount of risk associated with any specific HRF and assessed the survival benefit conferred by receipt of adjuvant chemotherapy based on the HRFs (7,11,12). Our study, based on SEER database, comprehensively identified most independent risk factors associated with the OS of stage II colon cancer, and included all these independent risk factors into the HRF groups, and then analyzed the HRFs and their combinations in depth. But the limitation in our study was that details (such as chemotherapy regimens, treatment courses, microsatellite instability, etc.) were not available in the SEER database, and some meaningful subgroups may not have been identified.

In our study, T4b tumors were identified as the highest risk for reduced OS, mucin-producing tumors the second, and LN examined less than 12 the third. The benefit of adjuvant chemotherapy among patients with stage II colon cancer was limited to those with specific HRFs. Only T4 tumors, poorly differentiated tumors and some combinations containing either could benefit from chemotherapy. This is basically consistent with the results of a retrospective study based on the California Cancer Registry (CCR) and the study conducted by Kumar et al. (6,13). However, their research mainly reported that benefit was mainly seen in the subgroup of patients with T4 tumors. The difference is that we have find poorly differentiated tumors can also benefit from chemotherapy, and our research have a larger amount of data, while excluding the effect of radiotherapy. In addition, a randomized controlled trial led by Ueno also confirmed our view. The study found that the 5-year RFS rate of patients with poorly differentiated tumors in the chemotherapy group achieved greater improvement (9.1%) than the surgery-alone group (14). Positive CEA, PNI, LN examined less than 12, unmarried status, mucin-producing tumors and left tumors were associated with significant increased risk of mortality compared with patients with no HRFs, and there was a cumulative effect of HRF on OS. Some earlier studies support our results (15-18). However, we found that adjuvant chemotherapy does not significantly improve the survival of patients with these HRFs. On the contrary, a large NCDB study reported that all patients with stage II colon cancer gained benefit from adjuvant chemotherapy regardless of high-risk pathologic features (19). But, the limitation of data variables and the selection bias of the inclusion criteria have led to controversial conclusions.

The general clinical prediction system uses uniform pathological characteristics to predict OS risk, and does not consider the individual differences of patients and the interactions among various risk factors. Meanwhile, due to the long survival of stage II colon cancer, there are many uncertain factors in the follow-up process, which is the limitation of the traditional prediction system. The nomogram model is a visualization tool that comprehensively considers various risk factors affecting OS. It can provide more accurate prediction results for specific patients, possess rich clinical application value, and is gradually adopted by clinicians. The prediction accuracy and discriminative ability of the nomogram have been well verified by the C-index and DCA.

Our study screened all HRFs and quantified the relative risk of death for each HRF in patients with stage II colon cancer. And we found that the survival benefit of adjuvant chemotherapy is limited to some subgroups of patients with T4 tumors, poorly differentiated tumors, and some of their combinations. Meanwhile, we developed high-efficiency prognosis models. We believe these results can help clinicians make adjuvant treatment decisions for high-risk stage II colon cancer.

Reporting Checklist: The authors have completed the STROBE reporting checklist. Available at https://tcr.amegroups.com/article/view/10.21037/tcr-21-1779/rc

Conflicts of Interest: All authors have completed the ICMJE uniform disclosure form (available at https://tcr.amegroups.com/article/view/10.21037/tcr-21-1779/coif). The authors have no conflicts of interest to declare.

Ethical Statement:The authors are accountable for all aspects of the work in ensuring that questions related to the accuracy or integrity of any part of the work are appropriately investigated and resolved. The study was conducted in accordance with the Declaration of Helsinki (as revised in 2013).