The cervical cancer combined with cervical tumor prolapse is very rare, and there is no standardized treatment in such cases. A few cases report have been published and have recommended combined abdominal and vaginal surgery as the main treatment (1-3). We wish to share and discuss our experience with gynecologists to improve our capability to deal with this type of disease. We present the following article in accordance with the CARE reporting checklist (available at https://tcr.amegroups.com/article/view/10.21037/tcr-21-2109/rc).

We present a case of a 48-year-old woman who was admitted with cervical cancer. The main symptom of the patient is irregular vaginal bleeding for half year. After biopsy of the cervical lesion, she was diagnosed as adenosquamous carcinoma. The pelvic magnetic resonance imaging (MRI) showed that the cervix occupied space, the upper third of the vagina was involved, and the pelvic lymph nodes were enlarged. PET-CT suggested that cervical volume increased is accompanied by 18F-FDG metabolism increased and multiple pelvic lymph nodes enlarged and metabolism increased. The 18F-FDG metabolism of small retroperitoneal lymph nodes was not abnormally increased. Therefore, the patient was diagnosed as cervical adenosquamous carcinoma stage IIIC1 and radical radiotherapy and chemotherapy were planned. On the 2nd day of TP chemotherapy [paclitaxel (135 mg/m2, cisplatin 60 mg/m2], the whole cervical tumor was prolapsed due to defecation. And the initial tumor size was 10 cm ×5 cm ×5 cm (Figure 1A).

The prolapsed huge tumor was unable to return to the vagina and was associated with active bleeding, so we urgently contacted the interventional department for arterial embolization to stop bleeding. Then the patient underwent a three-dimensional implant brachytherapy and the HR-CTV dose (D90) was 9.14 Gy (Figure 1A,1B). And the machine used for the IGBTs is Flexitron.

After three-dimensional implant brachytherapy, the prolapsed tumor was necrotic and fell off every day (Figure 2). On the 7th day after brachytherapy, the tumor size was reduced to 4 cm × 3 cm × 3 cm and it retracted into the vagina by itself (Figure 2). Physical examination showed that the distance from the lower edge of the tumor to the vaginal opening is 4 cm. We observed for several days, the tumor did not prolapse to the outside of the vagina again. On the 8th day after the implantation treatment, the patient complained of pain in the skin of the vulva. Then the patient underwent radical radiotherapy (pelvic and abdominal cavity external beam radiotherapy-PCTV 50.4 Gy/28 F, pelvic metastatic lymph nodes PGTVn 61.0 Gy/28 F (from February 17 to March 18, 2021), and followed with vaginal three-dimensional brachytherapy- HRCTV (D90) 27.25 Gy/4 F, quaque week (from March 23 to April 13, 2021). And the three-dimensional brachytherapy was applied tandem with ovoids. When the patient was treated with external beam radiotherapy-PCTV 7.2 Gy/4 F, just about 14 days after the three-dimensional implant treatment, we observed that congestion, edema and ulcers appeared on the skin of right labia majora and labia minora (Figure 3A,3B). The local cervical tumor was significantly retreated after external irradiation. And the CT and MRI images before and after external irradiation are shown in the Figure 3C-3F. All procedures performed in this study were in accordance with the ethical standards of the institutional and/or national research committee(s) and with the Helsinki Declaration (as revised in 2013). Written informed consent was obtained from the patient for publication of this case report and accompanying images. A copy of the written consent is available for review by the editorial office of this journal. 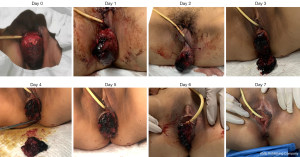 Figure 2 The tumor gradually regressed and it retracted into the vagina by itself on the 7th day after three-dimensional implant brachytherapy. 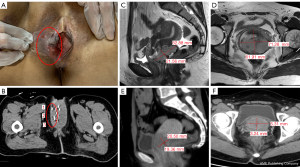 Figure 3 The skin damage and comparison of imaging after treatment with interstitial implantation brachytherapy. (A) The right labia majora and labia minora appeared ulcerated and painful (on 22th after the three-dimensional implant treatment). Just about 14 days after the three-dimensional implant treatment, we observed the skin of right labia majora and labia minora appeared congestion, edema and ulcers. But no photos were taken at that time. (B) The top of the No. 1–3 implant needles were obviously close to the skin of the right labia. (C,D) The MRI images before treatment (sagittal and transverse). (E,F) The CT images after external irradiation (sagittal and transverse). The patient couldn’t undergo MRI examination after placing spring clips during arterial embolization interventional therapy.

Cervical carcinoma continues to be a common gynecological malignancy in developing countries. According to current data, it ranks fourth-ranked cancer among women worldwide (4). And cervical and uterine prolapse are also common diseases in developing countries, but cervical cancer patients with uterine prolapse are relatively rare (5). The treatment of cervical cancer depends on the stage, with main treatment including surgery, radiotherapy and chemotherapy. However, no standard recommendations for treatment of cervical cancer combined with uterine prolapse have been well established (6). Some gynecological oncologists consider that cervical cancer with a prolapsed uterus is usually accompanied by cystocele–rectocele, and if radiation is performed, the damage to normal tissues and organs might be increased. Therefore, radiation therapy is generally not the first choice.

Accumulating evidences demonstrate that a surgical approach is still the main treatment option for women with cervical cancer combined with complete uterine prolapse (7). Pardal et al. reported that a radical vaginal surgery with bilateral pelvic lymphadenectomy followed by external pelvic irradiation and chemotherapy is the best therapeutic approach (1). Chung et al. pointed out that surgically treated with abdominal and vaginal approaches and with concurrent pelvic reconstruction (3). However, this case we reported was a huge tumor of cervical cancer suddenly combined with tumor prolapse. The prolapse tumor was so enormous that it was incarcerated in the vagina and could not move. Moreover, the gynecological surgeon did not recommend surgery because the patient has just received TP chemotherapy for less than 2 weeks.

The advantage of brachytherapy is that the dose decreases rapidly with distance, which can make the target area reach a higher radiation dose, and radiation dose of the surrounding tissue is very low (8). Because of these advantages, we decided to use three-dimensional implants brachytherapy on the surface of the tumor to reduce the volume as soon as possible. Due to the tumor elimination effect of brachytherapy, the huge prolapsed tumor shrank rapidly and retracted into the vagina on the 7th day after treatment. And then this patient successfully received radical radiotherapy. Therefore, we recommend that if there are surgical contraindications for the cervical cancer patients combined with prolapse, three-dimensional implants brachytherapy can be selected. And then radical radiation therapy can be performed according to the rapid regression of the tumor.

About 14 days after the three-dimensional implant treatment, we observed congestion, edema and ulcers in the skin of the right labia majora and labia minora (Figure 3A). We know that the skin damage was not caused by the external irradiation because the target volume of external irradiation did not cover the skin of the vulva and the patient only received external radiation dose 7.2 Gy/4 F. To further analyze the reason, we retrieved the CT images of the implant needles as shown in Figure 3B. It showed that the top of the No. 1–3 implant needles were obviously close to the skin of the right labia which was the main cause of the skin damage on the right side.

The patient was recently followed up on December 20, 2021. At present, the patient’s cervical local tumor is well controlled and shows no side effects.

For this case of cervical tumor prolapse, we used three-dimensional implant brachytherapy to retract the tumor into the vagina after shrinkage, and successfully complete the radical radiotherapy. We would like to suggest that three-dimensional implant brachytherapy may be an option for inoperable patients with cervical cancer combined with tumor prolapse. However, further researches are needed to determine the best treatment for these patients.

We would like to thank all members of the Department of Radiation Oncology, Jiangsu Cancer Hospital, Jiangsu Institute of Cancer Research, The Affiliated Cancer Hospital of Nanjing Medical University, Nanjing 210009, China.

Funding: This research was supported by ().

Reporting Checklist: The authors have completed the CARE reporting checklist. Available at https://tcr.amegroups.com/article/view/10.21037/tcr-21-2109/rc

Conflicts of Interest: All authors have completed the ICMJE uniform disclosure form (available at https://tcr.amegroups.com/article/view/10.21037/tcr-21-2109/coif). The authors have no conflicts of interest to declare.

Ethical Statement: The authors are accountable for all aspects of the work in ensuring that questions related to the accuracy or integrity of any part of the work are appropriately investigated and resolved. All procedures performed in this study were in accordance with the ethical standards of the institutional and/or national research committee(s) and with the Helsinki Declaration (as revised in 2013). Written informed consent was obtained from the patient for publication of this case report and accompanying images. A copy of the written consent is available for review by the editorial office of this journal.