Effects of long-term exposure to sevoflurane on the proliferation, migration, invasion, and cisplatin sensitivity of esophageal cancer

Esophageal carcinoma ranks as the sixth highest cause of male cancer-related mortality and eighth most common cancer worldwide (1). Esophageal squamous cell carcinoma (ESCC) and esophageal adenocarcinoma (EADC) are the two most common histological subtypes (2). EADC is more prevalent in Western countries, while East Asian countries have the highest incidence of ESCC (3). The overall 5-year survival rate for esophageal cancer is approximately 15–25% worldwide, and improving survival rates for this disease is a critical issue.

Cancer stem cells (CSCs) are tumor cells with the potential for self-renewal and multi-differentiation and play a leading role in tumor initiation, metastasis, immune evasion, and resistance to existing treatment methods. Octamer-binding transcription factor 4 (OCT4) and (sex determining region Y)-box 2 (SOX2) are representative embryonic stem cell transcription factors. Both of these proteins play a decisive role in the process of embryonic stem cell maintenance and multi-directional development. Several studies have shown that SOX2 (4,5) and OCT4 (6,7) play an important role in the resistance of tumor cells to chemotherapy, radiotherapy, and targeted therapies. Relevant studies have shown that one of the main reasons for the failure of esophageal cancer therapy is the emergence of drug-resistant cancer cells after treatment and subsequent recurrence of the cancer (8).

Surgery, comprehensive treatment, radiotherapy, and chemotherapy are the main treatment methods for esophageal cancer (9-11). Certain factors during the perioperative period can affect recurrence and the metastatic potential of cancer, including the surgical procedure itself (12), anesthetics (13,14), pain (15), and the stress response to the surgery (16). In recent years, it has been reported that anesthesia may have a direct effect on tumor cells and may affect tumor recurrence, metastasis, and long-term survival. Sevoflurane is one of the most commonly used clinical inhalation anesthetics, and its impact on tumors is controversial (17). Studies have shown that sevoflurane inhibited the proliferation, metastasis, and recurrence of various tumors after surgery, including breast cancer (18), ovarian cancer (19), and colon cancer (20). However, other studies reported opposite results (21-23).

The methylthiazolyldiphenyl-tetrazolium bromide (MTT) assay was used to determine cell proliferation and viability. MTT was dissolved in serum-free RPMI culture medium. MTT was added at a final concentration of 0.5 mg/mL to the cells and incubated for 4 h. After washing the cells with 1 mL phosphate-buffered saline (PBS), 1 mL of dimethyl sulfoxide was added, and the cells were dissolved completely by gentle rocking for 20 min. The absorbance per well was measured at 570 nm using a microplate reader.

The scratch assay is a convenient method for analysis of cell migration in vitro. Cells were cultured in 6-well plates at 37 °C, 5% CO2. When the cell density was greater than 90%, one artificial gap per well was created by scratching the cells with a 200 μL micropipette tip. Images were collected and analyzed at different time points.

The effects of sevoflurane on cell invasive capability were detected using 24-well transwell plates (8 µm pore size; Corning, NY, USA). Briefly, the bottom of each well insert was coated with 200 mg/mL of Matrigel and allowed to dry. Cells (5×104) in 200 μL serum-free medium were added to each upper chamber (insert). RPMI 1640 medium supplemented with 20% fetal bovine serum was added to the lower chambers. Following incubation for 48 h at 37 °C, invasive cells in the lower chamber were fixed with paraformaldehyde, colored with crystal violet, and counted using an inverted microscope (Olympus, Tokyo, Japan).

The sphere-forming assay can effectively detect the capacity of CSCs to self-renew. Cells (1×103) were cultured in serum-free medium supplemented with heparin, B27, epidermal growth factor, and basic fibroblast growth factor in 24-well ultra-low attachment plates (Corning, NY, USA) for one week, and the spheres were counted using an inverted microscope.

ELISA is a qualitative and quantitative method for the detection of immune responses using the specific binding of antigens and antibodies. Briefly, the culture medium in the experimental groups and control group were collected at indicated time and centrifuged at 2,500 rpm for 10 min. The levels of lactate dehydrogenase (LDH) in the supernatants were measured following the instructions from the enzyme immune assay (R&D Systems, Oxon, UK).

Cells were collected and washed with PBS by centrifugation at 2,500 rpm for 10 min. The cell concentration was adjusted to 1×106/mL, and the cells were fixed with 500 μL 70% pre-cooled ethanol overnight. The cells were washed with PBS, centrifuged, and the supernatant was removed. RNase A solution and propidium iodide (PI; both from Solarbio, Beijing, China) were added to the cells and incubated at 4 °C for 30 min in the dark. The cell cycle distribution was analyzed by flow cytometry.

Detection of apoptosis by flow cytometry

Effect of sevoflurane on the proliferation, migration, and invasion of EC109 and SKGT-4 cells

Figure 1 The effects of sevoflurane on proliferation, migration, and invasion of esophageal cancer cells. The esophageal squamous cell carcinoma (EC109) and esophageal adenocarcinoma (SKGT-4) cells were treated with sevoflurane. (A) Cellular viability and proliferation were evaluated using the MTT proliferation assay. n=3 in each group. *, P<0.05 vs. control. A representative image of the (B) migration area and (C) invasion activity. The invasive cells were colored with crystal violet. MTT, methylthiazolyldiphenyl-tetrazolium bromide. 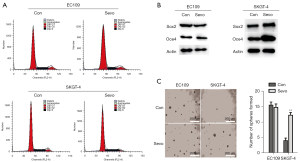 Figure 2 The effects of sevoflurane on cell cycle and stemness of esophageal cancer cells. The esophageal squamous cell carcinoma (EC109) and esophageal adenocarcinoma (SKGT-4) cells were treated with sevoflurane. A representative image of the (A) distribution of cells in the cell cycle, (B) protein expression of SOX2, OCT4, and (C) sphere-forming ability. SOX2, (sex determining region Y)-box 2; OCT4, octamer-binding transcription factor 4.

Effect of sevoflurane on sensitivity to cisplatin

Studies have shown that CSCs negatively affect the efficacy of anticancer chemotherapy. To explore the effects of sevoflurane on cisplatin resistance in esophageal cancer cells, the LDH content and apoptosis were measured in the two cell lines. The LDH content (Figure 3A) and the number of cells undergoing apoptosis (Figure 3B) were significantly reduced in the SKGT-4 cells treated with sevoflurane plus cisplatin compared with cisplatin alone. For the EC109 cells, there were no differences in LDH levels or apoptosis between cells treated with cisplatin and sevoflurane plus cisplatin. These data suggested that sevoflurane exposure reduced cisplatin sensitivity of the EADC cells SKGT-4 and the curative effect of chemotherapy. 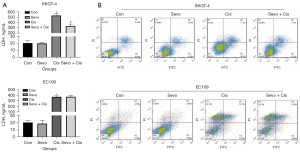 Figure 3 The effect of sevoflurane on the sensitivity of esophageal cancer cells to cisplatin. The esophageal squamous cell carcinoma (EC109) and esophageal adenocarcinoma (SKGT-4) cells were treated with sevoflurane, cisplatin, or sevoflurane plus cisplatin. (A) The lactate dehydrogenase levels were evaluated using an ELISA assay. n=3 in each group. *, P<0.05 vs. control; #, P<0.05 vs. cisplatin. (B) A representative image of cellular apoptosis. LDH, lactate dehydrogenase; PI, propidium iodide; FITC, fluorescein isothiocyanate; ELISA, enzyme-linked immunosorbent assay.

Surgery is one of the main treatments for patients with esophageal cancer (9,11). Nevertheless, postoperative recurrence is frequent. Multiple factors may contribute to postoperative recurrence and metastasis, including the anesthetics used (24). Sevoflurane is widely used in general anesthesia; however, the role of sevoflurane in esophageal cancer recurrence is unknown. In this study, we reported for the first time that long-term exposure to sevoflurane inhibited the proliferation and promoted the migration and invasion of SKGT-4 cells.

Cell proliferation can be used as an important indicator of cell survival or death (25). Tumor metastasis is a complex process involving the spread of tumor cells from the primary site to distant organs and plays a vital role in the development of drug resistance (26). The role of sevoflurane in postoperative recurrence and metastasis of cancer is controversial (17,27). Shi et al. showed that sevoflurane promoted the self-renewal and proliferation of CSCs through hypoxia-inducible factors, which may promote tumor growth (24). However, another study reported that sevoflurane anesthesia induced apoptosis and autophagy and inhibited the proliferation and invasion of colonic tumor cells (19). In this study, we concluded that long-term exposure to sevoflurane inhibited the proliferation of SKGT-4 cells, while promoting the migration and invasion capacity of these cells.

CSCs have stem cell-like characteristics and play a key role in postoperative recurrence and metastasis (28). SOX2 and OCT4 regulate the self-renewal of CSCs and multi-directional development of embryonic stem cells (4,7). In our study, long-term exposure to sevoflurane increased the stemness of SKGT-4 cells and significantly increased the protein expression of SOX2 and OCT4. Studies have shown that SOX2 and OCT4 can promote the progression of tumor cells (21,29). Thus, sevoflurane may have promoted the metastatic and recurrence potential of SKGT-4 cells by increasing the expression of SOX2 and OCT4 and enhancing stemness. However, sevoflurane did not affect EC109 cells. We believe that the different effects of sevoflurane on these two esophageal cancer cell lines may be related to the concentration and time of sevoflurane treatment and the histological and oncological differences between these tumor subtypes.

The development of chemoresistance is common during the treatment of patients with esophageal cancer. Therefore, it is necessary to find new therapeutic strategies. Cisplatin is a commonly used chemotherapy drug for patients with esophageal cancer and resistance to cisplatin substantially reduces the efficacy of the chemotherapeutic regimen. Several studies have reported the effect of sevoflurane on the sensitivity of different types of cancer cells to cisplatin, and the results varied (17,30,31). In our study, the combined use of sevoflurane and cisplatin inhibited the apoptosis of SKGT-4 cells compared with cisplatin alone. SOX2 and OCT4 play an important role in the resistance of tumor cells to chemotherapy, radiotherapy, and targeted therapy (4-7). Thus, we propose that long-term exposure to sevoflurane increased the protein expression of SOX2 and OCT4 that reduced the sensitivity of SKGT-4 cells to cisplatin, and this mechanism may ultimately promote postoperative recurrence and metastasis.

There were limitations in this study. First, further research will be required to explore the potential molecular mechanism or signal transduction pathways by which sevoflurane may produce cisplatin-resistance in EADC. Second, animal experiments were not performed, which limits the translation of these in vitro experiments to clinical applications. In summary, our results suggest that long-term exposure to sevoflurane may promote the migration and invasion and increase the stemness of EADC cells, thereby reducing chemosensitivity to cisplatin and ultimately promoting metastasis and recurrence of EADC.

Reporting Checklist: The authors have completed the MDAR reporting checklist. Available at https://tcr.amegroups.com/article/view/10.21037/tcr-21-2404/rc

Conflicts of Interest: All authors have completed the ICMJE uniform disclosure form (available at https://tcr.amegroups.com/article/view/10.21037/tcr-21-2404/coif). The authors have no conflicts of interest to declare.