Efficacy and safety of autologous hematopoietic stem cell transplantation in the treatment of malignant lymphoma after chemotherapy: a systematic review and meta-analysis

Survival of patients with this disease depends primarily on prognostic factors and patient response to first-line therapy (8). Long-term survival and prognosis of patients have not been significantly improved, despite a number of current treatment options available for this disease (9). Autologous hematopoietic stem cell therapy (AHSCT) is a commonly used treatment for malignant lymphoma recurrence after conventional chemotherapy. At present, it has been reported that AHSCT has certain advantages compared with conventional chemotherapy, but its efficacy and safety in the first-line treatment are still controversial (10). Existing limited clinical randomized controlled trial data also did not draw consistent conclusions. To address the above limitations, this meta-analysis systematically and comprehensively analyzed the efficacy of AHSCT in the treatment of malignant lymphoma after high-dose chemotherapy, aiming to a provide reference and basis for the clinical application of this technology. We present the following article in accordance with the PRISMA reporting checklist (available at https://tcr.amegroups.com/article/view/10.21037/tcr-22-595/rc).

The inclusion criteria were defined as follows: (I) the type of study was a RCTs study; (II) the study subjects were clearly defined as patients with malignant lymphoma; (III) the treatment method of the experimental group was AHSCT after high-dose chemotherapy, and the treatment method of the control group was conventional chemotherapy; (IV) patient-related data or outcome indicators were clear and complete, and the study can provide data for analysis.

The exclusion criteria were defined as follows: (I) articles without effect size available for analysis (i.e., those lacking the numbers of cases or controls); (II) reports that do not provide original data (comments, series reports, letters, case reports, and other zoology studies and in vivo studies were excluded); and (III) low quality literature was excluded.

The articles were independently screened, and the data were extracted and finally cross-checked. Differences of opinion were resolved by expert consultation to decide the data selection.

Two researchers independently read the literature. According to the requirements of meta-analysis, all relevant studies that met the inclusion criteria were screened out, and the quality of each article was evaluated. Studies that had duplicate reports, poor quality, and those with too little confidence in the report to be used were eliminated. Data extraction was performed according to the established tables, and a database was constructed to check the data. If the research report was incomplete, the author was contacted for verification, and those documents that were confirmed to be unavailable were excluded from this meta-analysis. Disagreements between the two researchers were resolved through discussion or third-party arbitration.

The methodological quality of the included studies was assessed using the Cochrane Reviewers’ Handbook 5.3 tool as the criterion for quality evaluation of the included literature. The Cochrane Reviewers’ Handbook 5.3 tool mainly evaluated the quality of included studies based on criteria such as randomization, blinding, and allocation concealment: (I) what random allocation method was used, and whether the method was correct; (II) whether allocation concealment was performed, and whether the method was correct; (III) whether blinding was used, and who was blinded; (IV) whether there was loss to follow-up and exit, whether to use intention-to-treat analysis; (V) other. 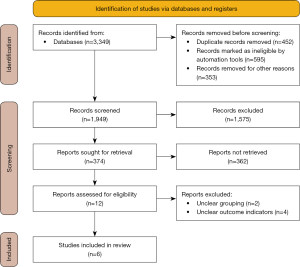 Basic information of the included literature

The Cochrane Handbook version 5.3 systematic review writing manual was adopted to evaluate the bias risk of the 6 documents included in this study and output the bias risk chart, as shown in Figures 2,3. 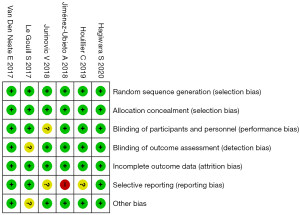 Figure 3 Bar chart of the bias risk assessment of the included literature.

The overall survival of the experimental and control groups was analyzed by literature survey and screening of the six included studies. Meta-analysis of the overall survival of patients receiving AHSCT (Figure 4) was performed, and the heterogeneity analysis results showed I2=0%, so the FEM was used for analysis. After meta-analysis of the comprehensive structure model, the results showed that OR =2.88, 95% CI: 1.78–4.66, Z=4.31, and P<0.0001, which indicated that there was a significant difference between the survival rate of patients receiving AHSCT and those who did not receive AHSCT (P<0.05), which suggested that AHSCT was more effective in improving the survival rate of patients with malignant lymphoma and poor chemotherapy response. Figure 5 displays a funnel chart analysis of the overall survival rate results of patients; the funnel chart was basically symmetrical, and most of the data corresponded to points within the 95% CI, which indicated that the publication bias was low. 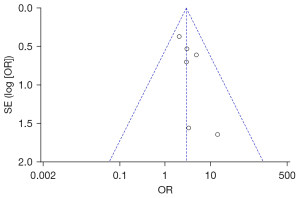 Comparison of partial remission rates between the two groups 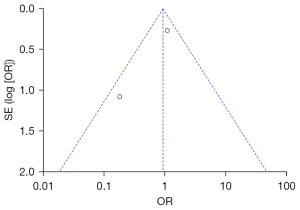 Comparison of complete remission rate between the two groups

The complete remission rates of the experimental and control groups were analyzed via literature survey and screening of three studies. Meta-analysis of the partial remission rate of patients receiving AHSCT (Figure 8) was conducted, and the heterogeneity analysis results showed that I2=61%, so the REM was used for analysis. After meta-analysis of the comprehensive structure model, the results showed that OR =1.00, 95% CI: 0.38–2.63, Z=0.00, and P=1.00, which indicated there was no a significant difference in the partial remission rate between patients receiving AHSCT and those who did not receive AHSCT (P>0.05). Figure 9 displays a funnel chart analysis of the complete remission rate of patients; the funnel chart was basically symmetrical, and most of the data correspond to points within the 95% CI, which indicated that the publication bias was low. 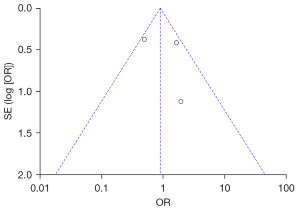 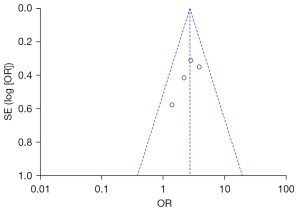 Lymphoma is the general term for malignant tumors of lymph nodes and lymphoid tissues outside the nodules. According to histopathology, lymphomas can generally be divided into NHL and HL (17). There are many types of this disease, its incidence rate is high, and it can easily metastasize, thus making it more complicated and difficult to treat. Lymphomas are typically sensitive to chemotherapy, with some patients being relieved of the disease and having long-term survival after conventional chemotherapy. However, there are still a large number of patients with poor results after conventional chemotherapy, which leads to further deterioration of the patient’s condition and ultimately death (18).

In response to the above challenges, doctors began to increase the dose of chemotherapeutic drugs, striving for better curative effects. However, the results of clinical research data showed that although high-dose chemotherapy drugs can kill tumor cells, it also results in considerable damage to the patient’s bone marrow hematopoietic and immune functions, which seriously affects their survival and prognosis (19). Therefore, AHSCT technology was developed; the core technology of AHSCT is to collect the patient’s own hematopoietic stem cells and then cryopreserve them in vitro. After the patient has undergone high-dose chemotherapy or combined whole-body irradiation or total lymph node irradiation, these cells will then be infused back into the patient’s body, so that their hematopoietic and immune functions can be restored (20). The advantage of this method is that it can kill tumor cells to the greatest extent, while also guaranteeing the safety of patients. A large number of clinical studies have confirmed that high-dose chemotherapy combined with AHSCT is effective for the treatment of lymphoma. At the same time, the safety and effectiveness of this treatment have been continuously improved, and the indications have been continuously clarified (21,22). It can be said that AHSCT is currently the most important and effective method for the treatment of lymphoma. It is an effective initial treatment plan for some young relapsed/resistant patients and chemotherapy-sensitive patients. For some suitable patients older than 65 years old, AHSCT is also a good treatment option (23).

However, this method remains controversial. For example, a large number of prospective randomized trials are still needed to verify and evaluate whether this method can be used as a first-line treatment for lymphoma treatment (24). Although there is still a lack of strong evidence on the adverse effects of first-line application of AHSCT for the treatment of lymphoma, it can improve the control rate of the disease and even enable some patients to obtain a cured disease-free survival. Generally, the efficacy of AHSCT in the treatment of lymphoma is positive, but information regarding its safety, indications, and adverse reactions still requires further in-depth and comprehensive research (25).

It can be said that this study provides new ideas and a reference basis for the treatment of malignant lymphoma in patients with an ineffective response to conventional chemotherapy. However, the articles included in this meta-analysis were not comprehensive enough, and thus, may result in some deviations in the research results of this study. In future studies, we will further expand the scope of the search to include in-depth and comprehensive research.

Reporting Checklist: The authors have completed the PRISMA reporting checklist. Available at https://tcr.amegroups.com/article/view/10.21037/tcr-22-595/rc

Conflicts of Interest: All authors have completed the ICMJE uniform disclosure form (available at https://tcr.amegroups.com/article/view/10.21037/tcr-22-595/coif). The authors have no conflicts of interest to declare.