Our patient is a 65-year-old male with a history of smoking 15 cigarettes a day, his father died of colon cancer. On July 25, 2019, positron emission tomography-CT (PET-CT) showed left lung malignant tumor with left hilar lymph node metastasis, and no abnormal metabolic lesions were found in other organs. 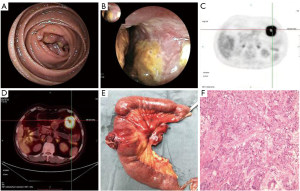 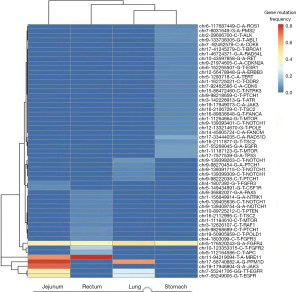 The lung and small intestine had identical EGFR gene mutation sites. The patient was diagnosed with metastatic jejunal squamous cell carcinoma and was given 8 courses of docetaxel at 120 mg each. On August 7, 2021, chest and abdominal CT was conducted and blood tumor markers were re-examined, and no tumor recurrence was observed. The patient was still alive during telephone follow-up before submission. (Figure 3).

All procedures performed in this study were in accordance with the ethical standards of the institutional review board of Wenzhou central Hospital and with the Helsinki Declaration (as revised in 2013). Written informed consent was obtained from the patient for publication of this case report and accompanying images. A copy of the written consent is available for review by the editorial office of this journal.

This is the first reported gene mutation profile of metastatic small intestinal cancer. A rare pathogenic double site EGFR gene mutation was observed in squamous cell carcinoma. Previous reports have indicated that compared with other rare mutations in non-small cell lung cancer (NSCLC), the frequency of these two mutations may be higher (6,7), and compared with single site mutation, double site mutation has shorter a progression free survival (PFS) and a lower object response rate (ORR) (8). EGFR mutation are present in 4.5% of lung squamous cell carcinomas, and treatment with tyrosine kinase inhibitor (TKI) provide a survival benefit, but this benefit may still be lower than that of lung adenocarcinomas with EGFR mutations (8). We also found a high frequency mutation of PPM1D (c.1787A>G) in lung and small intestinal squamous cell carcinoma tissues for the first time, which were included in the exome aggregation consortium (EXAC) (http://exac.broadinstitute.org) and the Chinese 1,000 genome databases (http://www.internationalgenome.org/data). The minor allele frequency (MAF) values were g =0.000059/7 and g =0.0002/1, respectively. PPM1D is a negative regulatory gene of deoxyribonucleic acid (DNA) damage repair and a negative regulatory of the tumor suppressor gene, p53(9). It is involved in the occurrence and progression of numerous tumors, including pancreatic, colorectal, NSCLCs(10), etc. It is worth noting that PPM1D may be a potential therapeutic and prognostic target for multiple tumors. A study has shown that PD-L1 is highly expressed in the gastrointestinal metastasis of lung cancer (11). In our case, PD-L1 expression in lung cancer and small intestinal squamous cell cancer tissues was 30% and 60%, respectively.

Considering that the patient’s father had a history of colon cancer, and the patient had both gastric and rectal adenocarcinoma, we suspected whether there was a pathogenic germline gene mutation. We found FGFR4 (c.1162G>A:p.G388R) in patients’ blood leukocytes and four tumor tissue samples, which was included in the ClinVar database as variant of undetermined significance (VUS), MAF =0.3 in the 1,000 human genome database, and was common to nearly half of cancer patients. Ulaganathan et al. reported that in a mouse model of breast cancer and lung cancer carrying the mutation, this mutation changed the transmembrane structure of FGFR, exposed the signal transducer and activator of transcription 3 (STAT3) binding site in the membrane, and made STAT3 protein aggregate and phosphorylate, thereby activating the STAT3 signaling pathway and accelerating tumor progression, resulting in a worse prognosis (12).

This is the first paper to analyze the gene profile of metastatic small intestinal squamous cell carcinoma. Genetic testing helped us identify the source of metastases, helped us find two rare mutations in the squamous cell carcinoma EGFR gene, and helped us find that FGFR4 (c.1162G>A:p.G388R) mutation may play an important role in tumor development. The limitations with our study including the nature of work, only one case report, and the significance of PPM1D gene and FGFR4 gene mutations is uncertain. So the significance of these mutations need to be explored in the future, and the patient need follow-up to see if other malignancies recur.

Reporting Checklist: The authors have completed the CARE reporting checklist. Available at https://tcr.amegroups.com/article/view/10.21037/tcr-22-481/rc

Conflicts of Interest: All authors have completed the ICMJE uniform disclosure form (available at https://tcr.amegroups.com/article/view/10.21037/tcr-22-481/coif). YW is from Zhejiang Shengting Medical Laboratory Co., Ltd. The other authors have no conflicts of interest to declare.

Ethical Statement: The authors are accountable for all aspects of the work in ensuring that questions related to the accuracy or integrity of any part of the work are appropriately investigated and resolved. All procedures performed in this study were in accordance with the ethical standards of the institutional review board of Wenzhou central Hospital and with the Helsinki Declaration (as revised in 2013). Written informed consent was obtained from the patient for publication of this case report and accompanying images. A copy of the written consent is available for review by the editorial office of this journal.