CD73 is a 70 kd, glycosylphosphatidylinositol (GPI) anchored cell surface protein, also known as ecto-5'-nucleotidase (ecto-5'NT, EC 3.1.3.5), which is encoded by NT5E gene (Gene ID: 4907) (1). CD73 is high expressed in various types of tumor cells, which has been found to be correlation with tumor cell's proliferation, adhesion, migration and invasion (2-6). And moreover, multiple retrospective studies have showed that CD73 overexpression is correlated with clinical stages, metastasis, prognosis of cancer patients (7-13). In preclinical experiments, CD73-blocked have showed the anti-tumor effects (14-16). CD73 has both enzymatic and non-enzymatic functions. As an enzyme, CD73 catalyzes the hydrolysis of AMP into adenosine and phosphate (17). In addition to its enzymatic function, CD73 have been found to be a regulatory molecule which related to tumor cell’s proliferation and metastatic properties, while the mechanism is unclear (18). In our previous studies, we found that CD73 overexpression might be correlated with EGFR/AKT1 signal pathway in cervical cancer cells (3). In this present study, we further verified the functions and possible mechanism of EGFR and AKT1 in cervical cancer cells with higher CD73 expression level. We present the following article in accordance with the ARRIVE reporting checklist (available at https://tcr.amegroups.com/article/view/10.21037/tcr-21-2446/rc).

Prime sequences used in the study

FCM were used to evaluate the CD73 expression. In brief, Cells were obtained and resuspended in PBS buffer at a concentration of 1×105 cells/mL, and then incubated with fluorescein isothiocyanate (FITC)-labeled anti-CD73 antibody (CD73/FITC) for 30 min at 37 ℃. Then cells were washed twice with PBS. Following that, cells were analyzed using FACS calibur flow cytometer (BD Biosciences, San Jose, USA).

SiRNA sequences used in the study

Cell proliferation were detected by using a xCELLigence system (RTCA Analyzer DP version, ACEA Biosciences). In short, 1×104 cells in each well were used for RTCA assay. First, 50 µL DMEM with 10% FBS were added in each well of E-plate for baseline determination. After baseline determination, 1×104 cells in DMEM with 10% FBS were added in E-plate wells, then, E-plate was placed in the RTCA analyzer at 37 ℃ in a 5% CO2 humidified incubator. Impedance measurements at every 5 min for 72–96 h. Data of cell proliferation were analyzed via RTCA-soft (ACEA Biosciences).

Twenty 6-week-old female BALB/c nude mice (RRID: IMSR_JCL: JCL: mID-0001) were purchased and feed by animal Center of Air Force Military Medical University for tumor xenogenesis experiment. The mice were raised in groups under controlled conditions, each group were kept in individually ventilated cages at a temperature of 20 to 24 ℃, humidity of 50% to 60%, and a 12 h light/dark cycle, with ad libitum access to mice chow.

The effect of CD73 overexpression on tumor growth in vivo were assessed by subcutaneous injection of 4×106 Hela cells infected with CD73/Lentivirus or control lentivirus into BALB/c nude mouse. Twenty mice were randomly assigned to four groups, five female mice were in each group (age: 6–7 weeks; body weight: 20–25 g). The tumors grow to approximately 40 mm3 to initiate the tests, tumors size were measured every 5 days with a vernier caliper for 25 days. The maximum size the tumors allowed to grow was 2,000 mm3, The mice were sacrificed by neck dislocation, and the mice were confirmed dead without activity. The volume of tumor was calculated according to the formula: a×b2×0.5 (a, largest diameter; b, perpendicular diameter). All procedure of animal experiments was processed according to animal welfare guidelines approved by Air Force Medical University’s Institutional Animal Care and Use Committee.

All data were confirmed in three biological replicates. Data were calculated and presented as the mean ± SD. ANOVA and Tukey test were used to perform comparisons of multiple groups. Comparison between two groups were conducted by using the Student’s t-test. P<0.05 was considered to be statistical significant. All analysis was performed with R software (version 3.4.2). 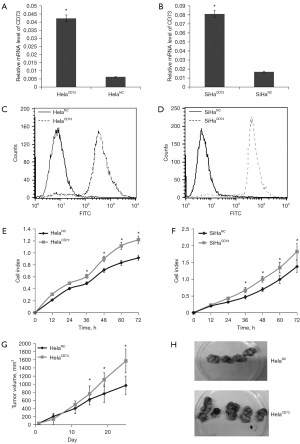 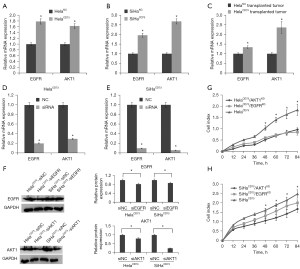 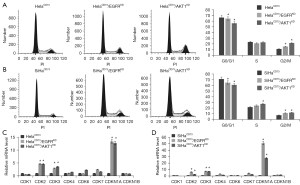 CD73 is widely expressed on the surface of various tissues and cells in the human body, including lymphocytes, endothelial cells, and epithelial cells. CD73 is involved in multiple biological progress such as immune regulation, cell adhesion, angiogenesis (19,20). CD73 have been found to be a key regulatory molecule in development of cancer, and is overexpression in a variety of cancer cells and patients’ biopsies (21). In our studies, we showed that CD73 overexpression promoted cervical cancer cells proliferation in vitro and tumor growth in vivo.

EGFR/Akt signal play important roles in tumor cell’s biological progression, such as proliferation, invasion, apoptosis, etc. Thus, EGFR/Akt signal has been showed to be involved in development of various tumor types, including cervical cancer. Anti-EGFR therapy has become an effective treatment or for several cancer types (22-24). Accumulating data have showed that HPV actives EGFR/Akt signaling in cervical cancer (25-29). EGFR is present in normal and cervical cancer tumors and is expressed to varying degrees, making cervical cancer more accessible to targeted therapy. The expression correlation between EGFR and CD73 have been found in several cancer types. For example, Shali et al. have reported that CD73 and EGFR expression are positively correlated in liver cancer tissue samples (30). Wu et al. have found that CD73 overexpression in colon cancer cell lines can up-regulated EGFR (31). Our data showed that expression levels of EGFR and AKT1 were increased in cancer cells with higher CD73 levels, and also in transplanted tumor tissues. These results suggested that EGFR and AKT1 played important role in increased growth rate of CD73 overexpression cancer cells. This hypothesis was validation by using EGFR and AKT1 knockdown experiments. Knockdown of EGFR and AKT1 significantly inhibited proliferation of HelaCD73 and SiHaCD73 via changing cell cycle distribution and inducing cell apoptosis. The mechanism of increasing EGFR/AKT1 levels in CD73 overexpressed cells has not been clarified. Zhi’s data have suggested that CD73 may promote EGFR expression in breast cancer though regulating some associated transcription factor, such as PPARγ (32). Shali et al.’s study has suggested that CD73 regulates EGFR through c-Src in hepatocellular carcinoma, which is a critical molecular for EGFR Phosphorylation (30). However, more experimental verification is needed for the potential mechanism between CD73 and EGFR.

CD73 has both enzymatic and non-enzymatic function, not only increase the production of adenosine which leads to immune suppression, but also enhances angiogenesis, tumor growth and metastasis. Recent years, CD73 has been considered as a potential target for cancer therapy. CD73-blockage have showed an anti-tumor effect in animal experiments. Although it has not yet been used clinically, several clinical trials have tried to evaluate the therapeutic effect of CD73 targeting treatment in cancer (15,16). Notably, to overcome cancer complexity, combination of anti-CD73 and -other targets, such as CTLA-4, OX40, PD-L1, etc., would possibility enhance the efficacy of anti-cancer therapy (32,33). Multiple studies with combinatorial target strategies have been reported. Goswami and colleagues have found that the absence of CD73 improved survival in a murine model of glioblastoma multiforme treated with anti-CTLA-4 and anti-PD-1 (33). Sociali have showed that anti-CD73 mAb treatment improves the efficacy of anti-ErbB2 mAb for treating engrafted or spontaneous primary tumors and lung metastases, in mouse models of HER2/ErbB2-driven breast cancer (15). Allard B have found that anti-CD73 mAb significantly enhanced the activity of both anti-CTLA-4 and anti-PD-1 mAbs against MC38-OVA (colon) and RM-1 (prostate) subcutaneous tumors, and established metastatic 4T1.2 breast cancer (14). These studies have presented the potential application value of combined with CD73-blockage in cancer therapy. Although it hasn’t been reported yet, our results in this study suggested the combined of anti-CD73 and anti-EGFR/AKT1 treatment might be a worthwhile research direction.

There were following limitation of this study. First, although we have try to construct the murine xenograft models by subcutaneous injection of SiHaCD73 or SiHaNC cells, while there were no tumor tissue formed, Second, we have found that, EGFR/AKT1 play an important role during the promoted effect of CD73 in cervical cancer growth. However, the mechanism of increasing EGFR/AKT1 levels in CD73 overexpressed cells has not been clarified. The regulated mechanism of CD73 on EGFR/AKT1 pathway should be investigated in future studies.

In conclusion, our data demonstrated that CD73 overexpression promote cervical cancer cell progression in vitro and in vivo, which was related to increasing of EGFR and AKT1. EGFR and AKT1 knockdown could decrease the CD73 overexpressed cell’s proliferation via inducing cell cycle arrest and apoptosis.

Funding: This study was supported by ( to ZWG). The funders had no role in study design, data collection and analysis, decision to publish, or preparation of the manuscript.

Reporting Checklist: The authors have completed the ARRIVE reporting checklist. Available at https://tcr.amegroups.com/article/view/10.21037/tcr-21-2446/rc

Conflicts of Interest: All authors have completed the ICMJE uniform disclosure form (available at https://tcr.amegroups.com/article/view/10.21037/tcr-21-2446/coif). The authors have no conflicts of interest to declare.

Ethical Statement: The authors are accountable for all aspects of the work in ensuring that questions related to the accuracy or integrity of any part of the work are appropriately investigated and resolved. Experiments were performed under a project license (No. 20200505) granted by Air Force Medical University’s Institutional Animal Care and Use Committee, in compliance with Air Force Medical University’s guidelines for the care and use of animals.