Small cell lung cancer (SCLC) occurs in 15–20% of lung cancer. More than 60–70% of SCLC patients were with metastasis at diagnosis. New therapeutic method has not emerged currently and with median survival time under 1 year in extensive disease and no more than 2 years in limited disease SCLC (1,2).

Hyponatremia with SCLC patients occurs in approximately 15% (3). Hyponatremia is usually caused by the syndrome of inappropriate antidiuretic hormone (SIADH) or increased release of atrial natriuretic peptide which is one of the most frequent abnormalities of clinical laboratory tests. Other possible causes of hyponatremia at least in elderly patients with SCLC are chronic heart failure, nephritic syndrome and volume depletion (4). Symptoms of hyponatremia include nausea, fatigue, disorientation, muscle cramps and so on. Severe hyponatremia could lead to seizure, even to death (5).

At present, the prognostic significance of hyponatremia has been reported in several studies with a controversial conclusion. Several analyses illustrated results with some evidence for low sodium levels being a negative prognostic factor (6-11). While, other studies could not demonstrate the similar results (12,13).The inconclusive results may contribute to the small sample in previous studies.

This study focused on patients with hyponatremia and evaluated its prognostic value in SCLC.

We retrospectively evaluated patients with diagnosed SCLC from July 2006 to September 2013 in Zhejiang cancer hospital. SCLC was confirmed by pathologic histology in all cases.

OS was defined as the time between the first day of therapy and death, whatever the cause. Observation time of patients alive without disease progression at the last follow-up visit was censored. The method of Kaplan and Meier was used to calculate survival curves. To assess the statistical significance of differences between the crude survival curves, we performed log-rank tests. Multivariate testing was done by Cox regression analyses. Analyses were conducted using the computer software SPSS version 19.0. The P value of less than 0.05 was regarded as statistically significant.

The basic characteristics of the all patients and hyponatremia patients are shown in Tables 1,2, respectively. 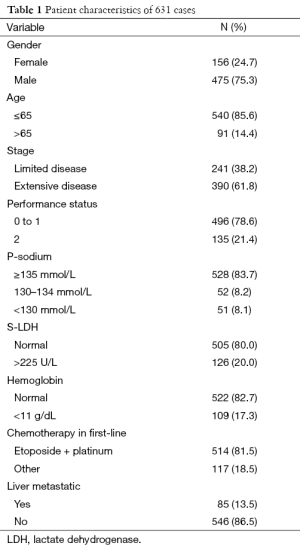 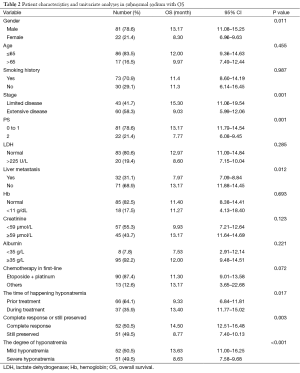 First-line therapy was performed with platinum-based regimens in all patients. In LD SCLC patients, thoracic radiotherapy (TRT) was employed in 79% and prophylactic cranial irradiation (PCI) was in 34% LD SCLC patients. In ED patients, 18% (69/390) patients with brain metastasis, 88% (61/69) received whole brain radiotherapy among them. And PCI was employed in 19% (63/321) remained ED patients.

Table 3 Log-rank test for overall survival in all patients with SCLC and subset analyses (LD, ED) with sodium values ≥135 vs. <135 mmol/L
Full table 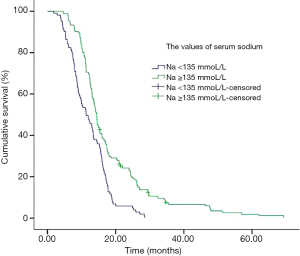 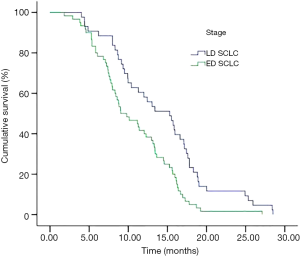 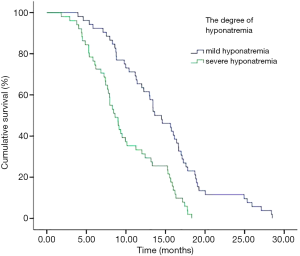 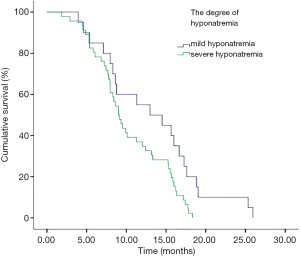 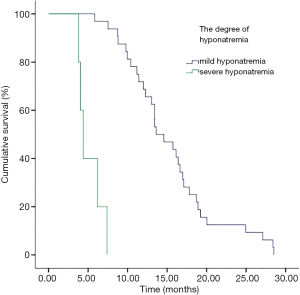 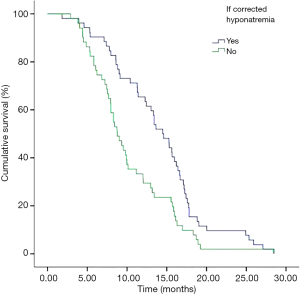 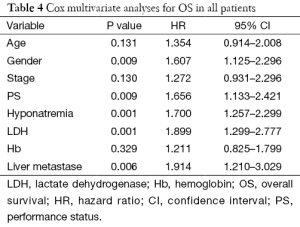 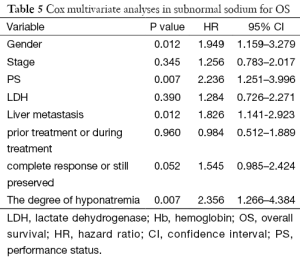 Hyponatremia in SCLC patients is usually caused by the SIADH (14). In SIADH there is an increased release of ADH which causes excessive water reabsorption in the collecting ducts and a resulting dilutional hyponatremia. There are 4 mechanisms for excessive ADH release: ectopic ADH secretion (release by tumor tissue); increased hypothalamic production of ADH-like substances in neurological disorders (brain tumor); administration of drugs (cytotoxic agents); and finally administration of exogenous ADH or oxytocin. Other factors may cause hypovolemic hyponatremia, including diarrhea or vomiting caused by chemotherapy, radiotherapy and so on (15).

Several retrospective studies have shown the presence of hyponatremia to be a negative prognostic factor. Hansen et al. reported the occurrence rate of hyponatremia in 453 patients with SCLC. It is the first to show that the patients who did not fully normalize the blood sodium value had a worse prognosis than the patient with hyponatremia (8). Hermes et al. conducted a retrospective single institution analysis with 395 cases (9). It reported hyponatremia was present in 18.9% of all patients. Then the occurrence of hyponatremia was 16.3% in our study of 631 patients. They illustrated that hyponatremia was associated with statistical significant shorter median survival than normal group (9.0 vs. 13.0 months, P<0.001) (9). Following our statistical analyses, analysis of the whole population between two groups showed 11.4 vs. 14.5 months of median survival (P<0.001). Our study was consistent with the results of his research.

And in a multivariate Cox regression analysis, the results illustrated that hyponatremia was a significant predictor for survival. Besides sodium levels, LDH, performance, live metastasis and gender were the other variables which also were statistically proven to be significant as predictive factors. According to other literatures (9), gender may be independent prognostic factor and female had a longer survival than man. However, it remains controversial. In our study, female had a shorter survival. It was a retrospective study and the number of female patients was less than male patients. On the other hand, we analyzed that female patients experience more chemotherapy treatment related toxicity and different physical and biological factors could be the reason for the difference between the survivals.

In subnormal analysis of sodium group, the 66 patients who appeared hyponatremia before treatment received sodium supplementation and chemotherapy, 42 cases returned to normal but the values remained subnormal in 24 patients. In the group of 37 patients who appeared hyponatremia during treatment, after receiving sodium supplementation during treatment, 10 patients returned to normal but 27 patients were still hyponatremia. Thereby, normal sodium values could be restored in 49.5% (52/103) in all patients. On the other hand, patients who still remained low sodium values despite adequate treatment were prone to have shorter median survival than the group of patients with complete response (8.70 vs. 14.55 months, P=0.003). These findings are in line with other reports on hyponatremia in SCLC. As Hermes et al. reported, patients with falling sodium values despite adequate treatment were prone to rapid disease progression with median survival below three months (9). Ma et al. also illustrated that the group of patients who was still had low sodium levels in the blood after treatment had worse survival (6.2 vs. 10.3 months) (16).

As a retrospective analysis, our report had some limitations. The information on treatments for patients with hyponatremia was not very comprehensive. Hence, every patient should have a serum sodium test at every stage of the treatment process. Monitoring the sodium level is required not only before treatment, but also during the oncological treatment.

We demonstrated that hyponatremia was significantly associated with poorer prognosis in SCLC regardless of extensive or limited stage. The value of hyponatremia in SCLC is as a candidate prognosis factor in clinical practice.

Ethical Statement: The authors are accountable for all aspects of the work in ensuring that questions related to the accuracy or integrity of any part of the work are appropriately investigated and resolved. The study was conducted in accordance with the Declaration of Helsinki (as revised in 2013). The study was approved by the Institutional Review Board. Written informed consent was obtained from every patient.

Open Access Statement: This is an Open Access article distributed in accordance with the Creative Commons Attribution-NonCommercial-NoDerivs 4.0 International License (CC BY-NC-ND 4.0), which permits the non-commercial replication and distribution of the article with the strict proviso that no changes or edits are made and the original work is properly cited (including links to both the formal publication through the relevant DOI and the license). See: https://creativecommons.org/licenses/by-nc-nd/4.0.